Two days ago I wrote (and fulminated) about the Society of Systematic Biologists’ (SSB’s) hamhanded vote to remove the name of Ernst Mayr from its award for the best student paper at the annual meeting—for no reason other than Mayr was a white man. (They can’t get him on bigotry, for he was a vigorous antiracist and proponent of human equality.) His pallor, though, was sufficient to make some people feel “excluded”.

I hope the vote to defenestrate one of the greatest evolutionary biologists of our time will fail. In the meantime, a student at Berkeley named Jackie Childers had posted on Facebook her defense of retaining Mayr’s name and this post was brought to my attention. Jackie is a sixth year grad student, a member of the SSB, and a systematic/evolutionary/behavioral herpetologist and ornithologist. Her own website is here. She is also Mexican, which is relevant to the discussion (see below).

Without further ado, I’ll put her statement between the lines below:

The controversy over removing Ernst Mayr’s name from the Society of Systematic Biology’s Ernst Mayr Award is growing more acrimonious on Twitter. Since the platform limits one’s ability to express views at length, I’ll just take a moment to put in my two cents as a millennial, first-generation college student, non-white woman.

As someone who’s primarily worked with, been mentored by, and surrounded by white men in my field, I’ve always been keenly aware of the lack of diversity in academia. I’ve also witnessed the genuine efforts that individuals and societies have made to address this representation problem, and I do sincerely believe that things have and will continue to improve.

To me, the naming of awards that honor those that have contributed significantly to their research field highlights a fact that I feel is often underacknowledged: science itself is made up of people.

I think about my very, very brief career so far: Yes, I love the lizards/ birds I study, the places I’ve done fieldwork, the science I’ve generated- but at the end of the day, what makes me most excited about being a biologist is continuing to be a part of the academic community, surrounded by friends and colleagues I’ve made throughout the years. Communities of scientists have a history, and one of the best ways to preserve and honor that history is to commemorate those individuals with legacies that warrant preserving. It’s also an unfortunate fact that “the history of science” is rarely formally taught or acknowledged, so for the most part early-career students have to learn about figures such as Ernst Mayr, Margaret Morse Nice, or Theodosius Dobzhansky on their own (all of whom have awards named after them).

The naming of awards after individuals does, in a small way, help to alleviate this issue. For example, the UCB Museum of Vertebrate Zoology provides its graduate students with annual funding. Each award bears names such as Annie Alexander and Joseph Grinnell (the museum’s founder and first director), David and Marvalee Wake, Ned Johnson, Carl Koford, Louise Kellogg, all individuals whose lives and legacies are deeply interwoven into the history of the museum itself; and each year students are reminded of these legacies when the awards are given out (here’s a link to the full list of awards). Each time I’ve been prompted to take a deeper, more intimate look into the careers and lives of honored individuals, I’ve learned more about my field, about significant scientific discoveries and theories, and in many cases, felt deeply inspired by their personal stories.

The naming of awards after people is also a way to keep alive the memory of those in the community no longer with us. Every year whenever I receive a notification from SSAR for solicitations, or of the names of the recipients of the Margarita Metallinou award, my heart warms, and I feel a sliver of gratitude that her memory continues through the support of other postdocs around the world.

As an undergrad and graduate student, I’ve looked up to figures such as Ernst Mayr, Rachel Carson, and E. O. Wilson, and made personal heroes out of people like Bill Branch who I had the amazing fortune of working with in Namibia before he passed. I admired their passion and creativity, in some cases their generosity and mentorship. I never felt hindered that I did not identify with the gender or race of the heroes I looked up to because those qualities about them are not what inspired me in the first place.

To me, erasing these names from honors and awards feels like a depersonalization of science. If this does indeed become common practice by societies, I think it would be doing a grave public disservice. I do not like to speak for entire communities, and the upcoming SSB vote will provide a clearer picture of where most individuals stand on this subject. However, given that the move to remove Ernst Mayr’s name from the award is ostensibly being done in service for individuals for which I share many demographic qualities, I thought it worth providing my voice.

Indeed! I can’t tell you how heartened I am that there are still students who aren’t brainwashed by wokeness.  Here’s a picture of Jackie that she labeled, “Me and a Varanus albigularis (Namibia 2014).”  [It’s a rock monitor lizard.] 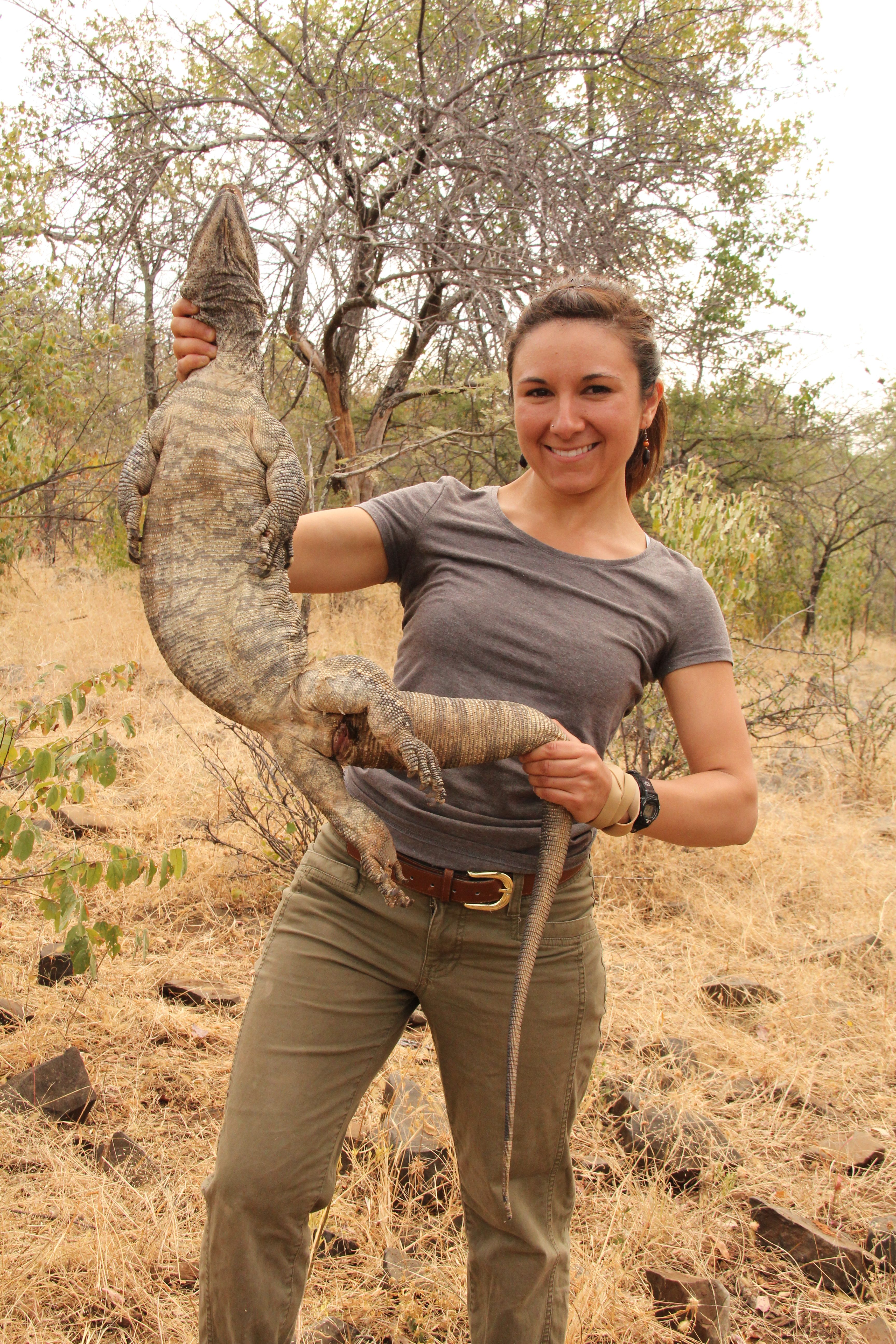