The Pallas’s Cat is my absolute favorite of wild felids because it’s cute, small, and fluffy (though not friendly) Most of the information we get about Pallas’s cat (Otocolobus manul), also called the “manul”, seems to come from Russia, for Russia is where many of them live. Here’s their range: 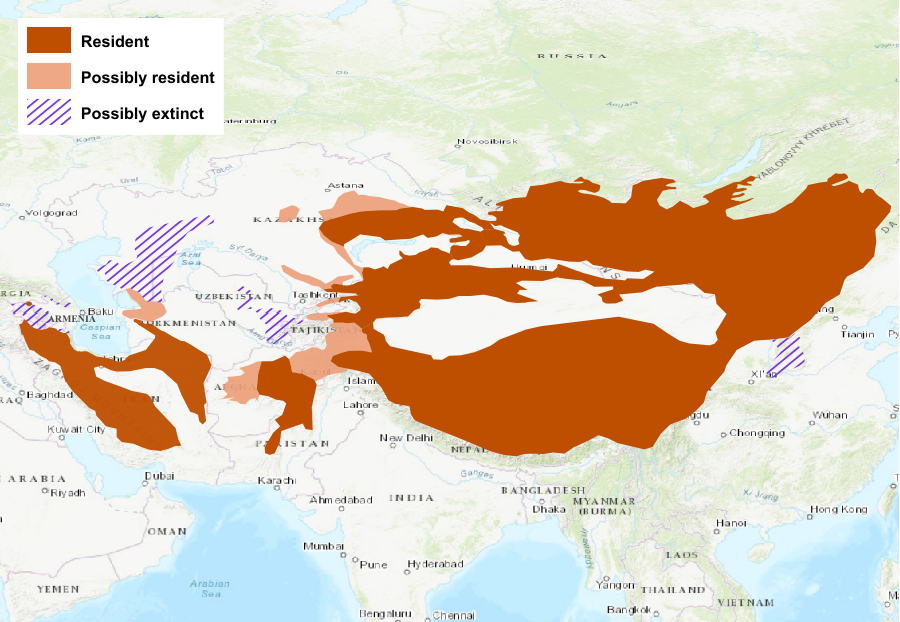 From Russia Beyond, we have an article about manuls, which gives you many FUN MANUL facts. 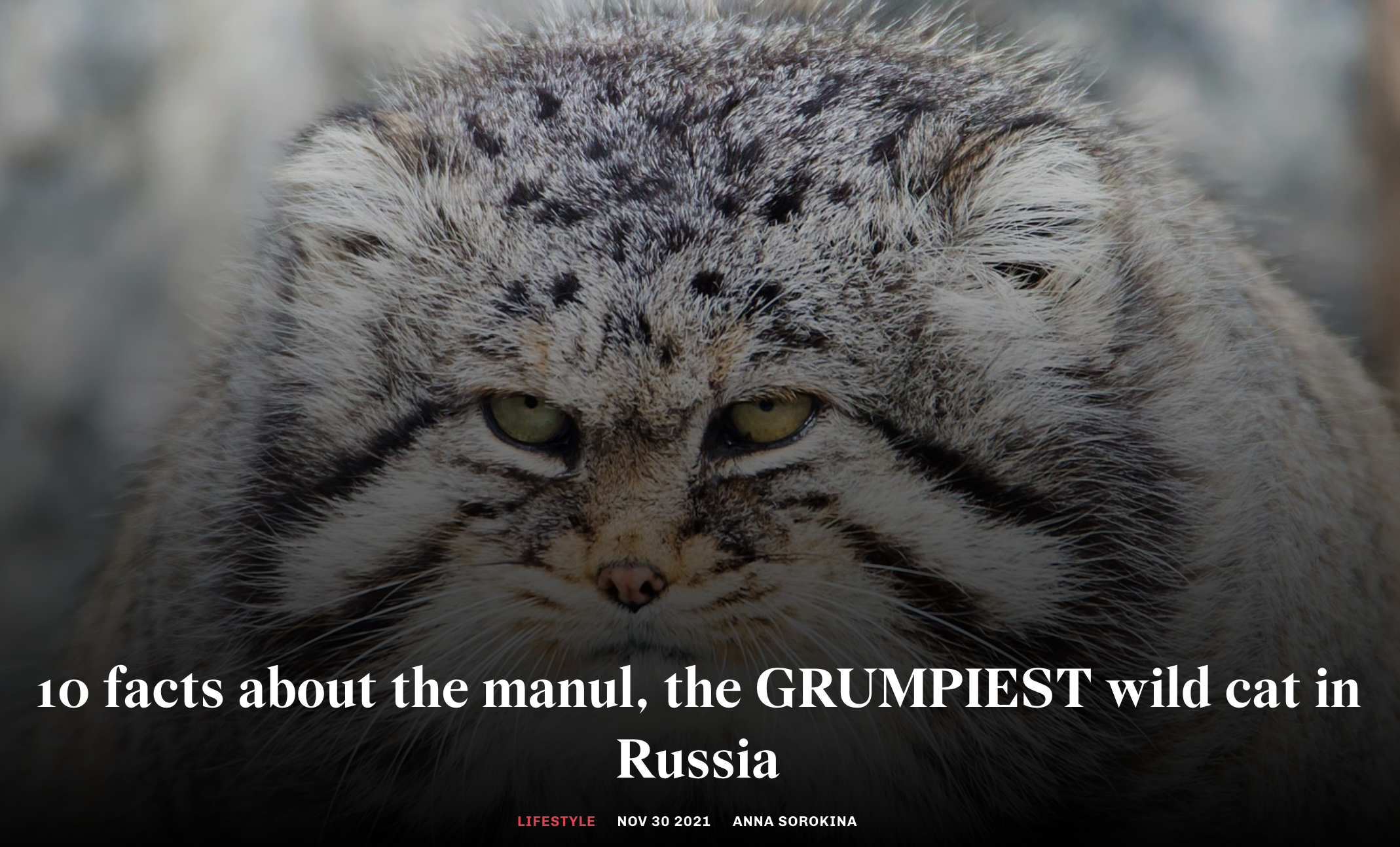 Some photos and videos (indented bits are from the article:

Despite their diminutive size, manuls still seem rather large, which is down to their dense fluffy fur coat – the densest among all cats. Every square centimeter of skin contains 9,000 hairs up to 7 cm long. This fluffiness allows them to survive in the harshest conditions.

Manuls’ survival depends on them gaining weight during the fall. Experts refer to this as “fattening up”. It’s all down to the inhospitable winters in the steppes they inhabit. As if -50°C temperatures weren’t enough, there are also fierce winds. And manuls never hibernate – they hunt all year round. So, the only way for them to survive is to store enough fat. A manul can weigh up to 6-7 kg in winter and constantly goes on food runs. 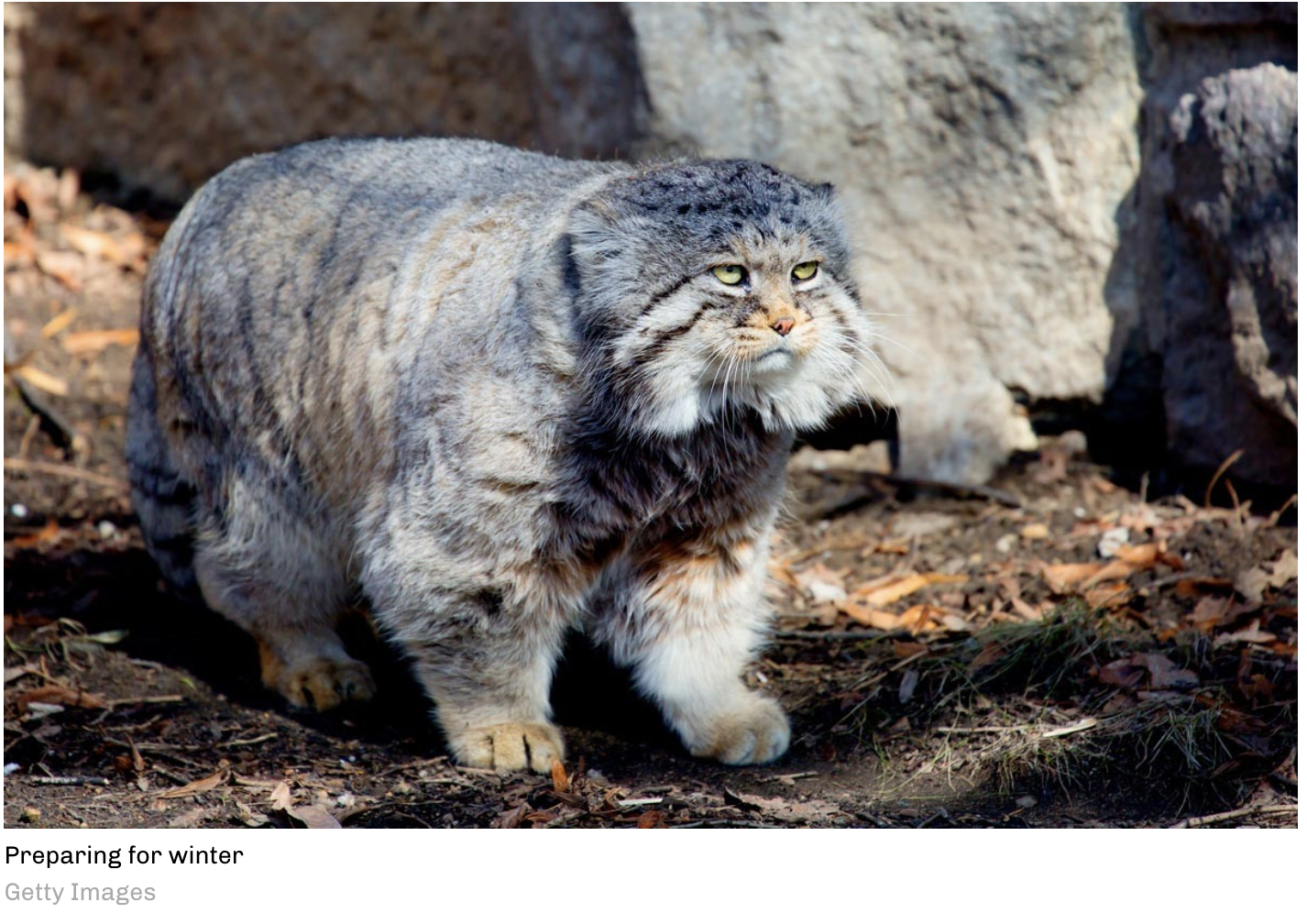 These cats are proudly solitary, each living on its own territory (which measures around 4 sq. kilometers) and encountering one another only during the mating season in spring. The manul is also an endangered species and included in the Red Data Book of Russia and other countries’ endangered lists. Although experts believe they appeared some five million years ago, very little is known about them. Exact numbers in the wild are tough to estimate, due to their secretive nature. Currently, there are an estimated 3,000 known to be living in Russia (Mongolia is believed to have more, according to scientists). 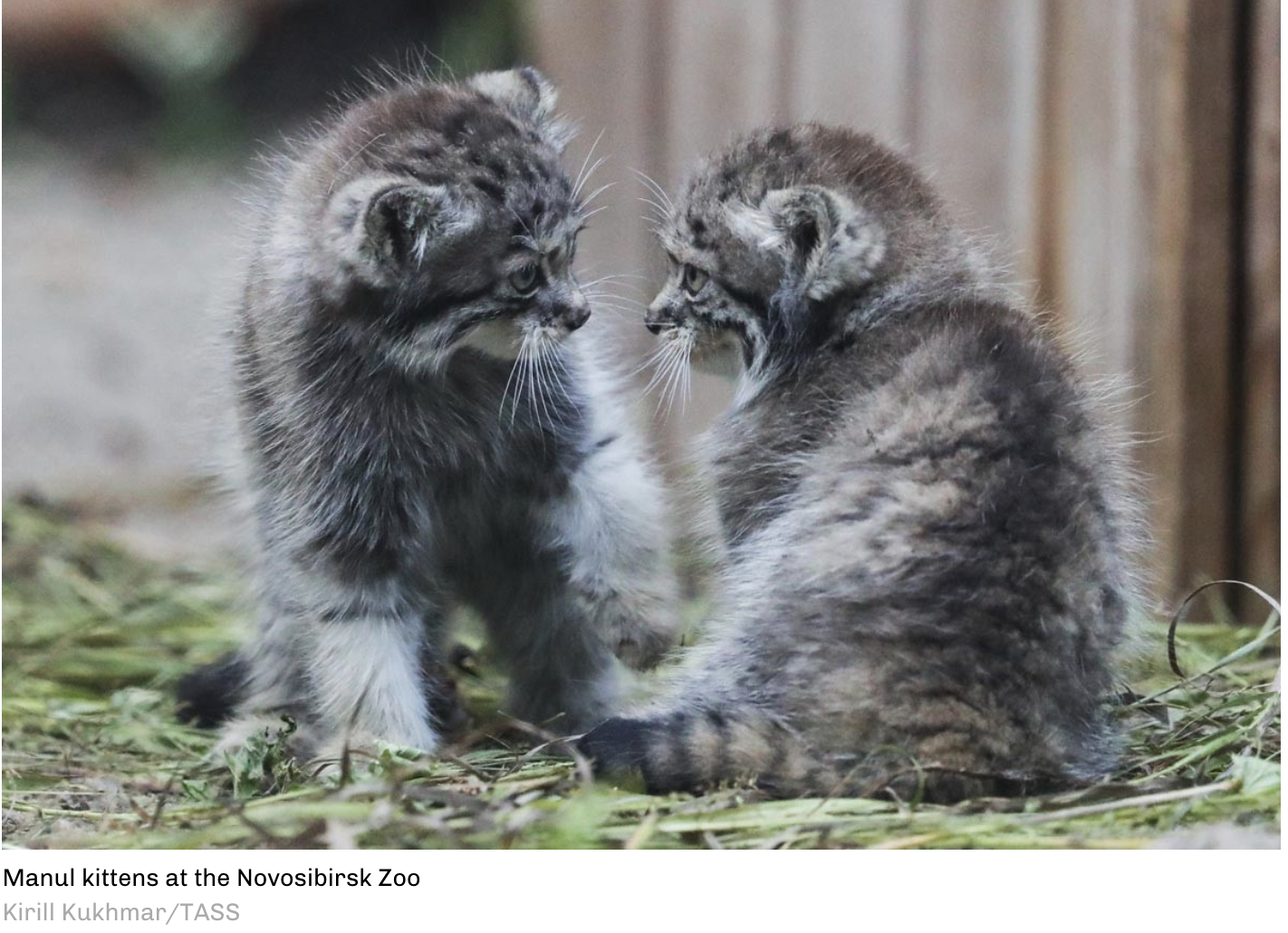 A regular house cat weighs more than the wild manul, whose kittens are so tiny, they measure less than 100 grams in weight; meanwhile, an adult manul (eight months or older) weighs anywhere between 3-5 kilograms. They’re no bigger than ordinary cats, either, usually about 60 cm in length, followed by a 30 cm tail. By the way, the cat’s Latin name is ‘Otocolobus manul’ – which means “ugly ear” – although we don’t see anything wrong in that department! 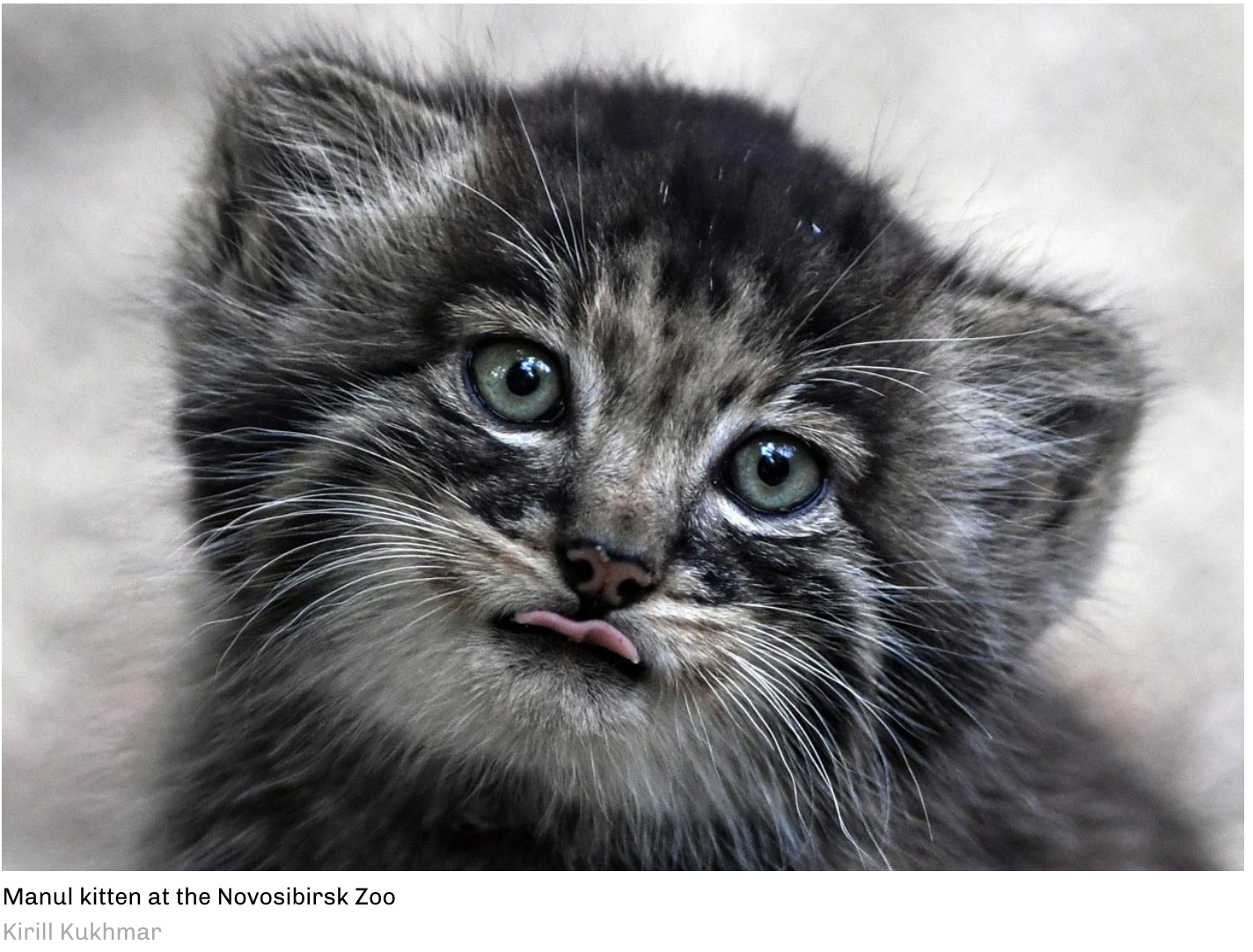 Video of a wild manul: 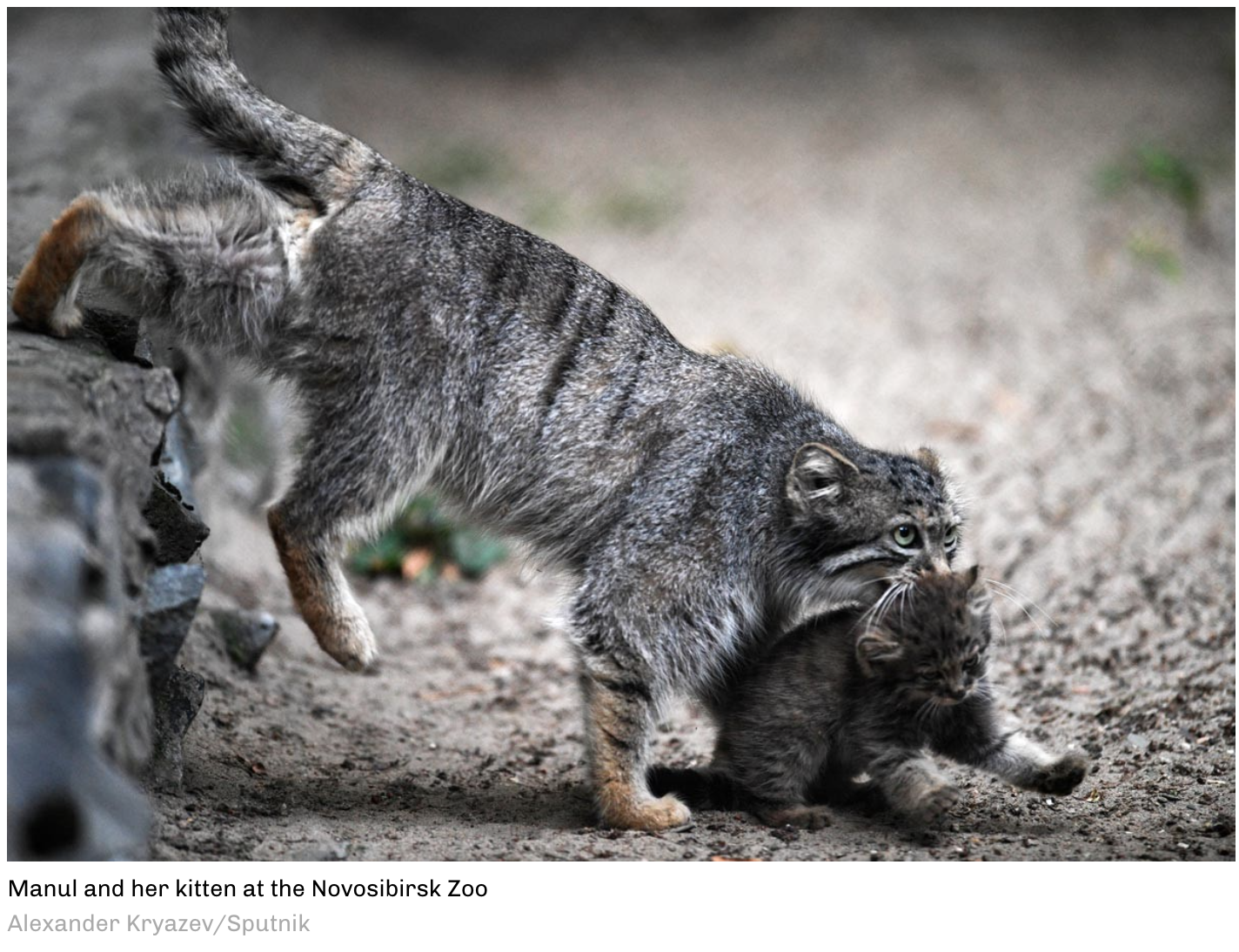 And a manul at the Moscow Zoo:

We have one of the most striking cats I’ve ever seen on this site (click screenshot to read):

Text from the article is indented:

OMG, this is a Maine Coon with an amazing face. His full name is “Richie du Mont d’Even”. I think he has a black smoke coat which has created this black face with the assistance of other genes (polygenetic influence?) and ears with piercing, diamond eyes. This is a very special cat.

His paws are balls of fluff. He has a mane that goes over his head like a halo. He’s angelic and other-worldly. The lynx tips on the end of his ears are smoky grey which makes them stand out. They are a bit like the opposite to the black lynx tips of the wild caracal. I believe that he lives in France. He was born on 7th November 2020. He is still very young. They say Maine Coons reach adulthood at around the age of 4. He is going to be enormous as well.

LOOK AT THIS CAT! 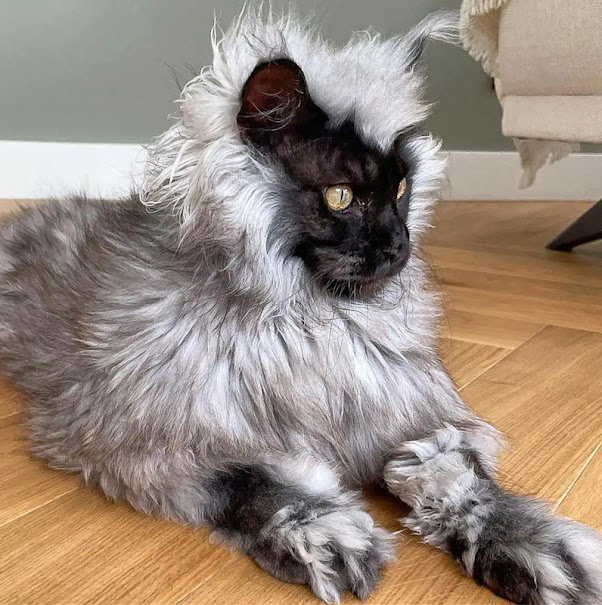 Some basic genetics about the smoke coat

The smoke coat is formed by the combination of the inhibitor gene with non-agouti. Sarah Hartwell, a cat genetics expert, says that the inhibitor gene is the “silver-restriction” gene. It allows pigment at the tip of the hair but restricts the amount of pigment which is laid down in the hair shaft; so for a silver series smoke the shaft is white/ivory. This applies to Ritchie above.

The tipping colour, that is the colour at the end of the hair strand, is called the top-colour. The pale colour of the hair shaft is known as the under-colour. When the contrast between these two colours is strong as in for black cats, the coat is very striking. This kind of shading and silver also occurs in red and cream coloured coats. They are referred to as cameos, sometimes.

Here’s another picture of Richie, and there are many more on his Instagram site: 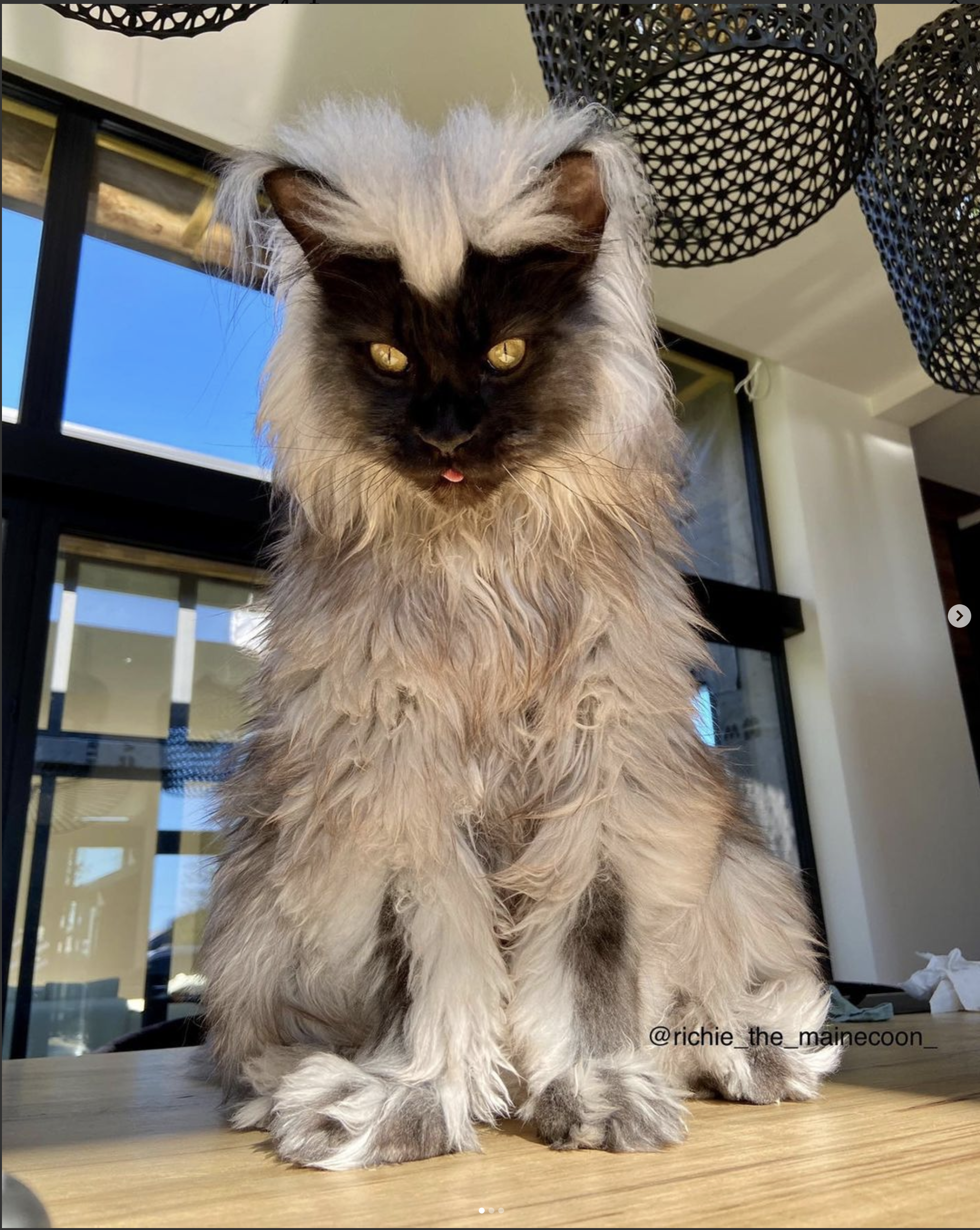 A new study, summarized in the first article below from yahoo! news via The Independent, and taken from the original research paper in the Journal of Research in Personality (second screenshot, access free) concludes that cats are somewhat psychopathic, at least according to the definition (it’s a combination of meanness, boldness, and disinhibition).

But you may have previously dismissed it, thinking surely it isn’t possible for your adorable fluffy creature to posses psychopathic tendencies.

Well, it turns out that it is. At least, that’s what a group of scientists from the University of Liverpool and Liverpool John Moores University have suggested in their latest research.

Published in the Journal of Research in Personality, the study, which involved 2,042 cat owners, illustrates the development of the first ever tool available to measure psychopathy in cats.

Named the CAT-Tri+, the test comes in the form of 46 statements that require owners o rate how well each one describes their pet.

Statements include: “My cat torments their prey rather than killing it straight away”, “my cat vocalises loudly (e.g meows, yowls) for no apparent reason”, and “my cat is very excitable (e.g goes into ‘overdrive’ and becomes uncoordinated)”.

Other statements include observing whether your cat sits in high places, whether they “dominate” the neighborhood cats, and whether they purr when attacking people or animals.

All answers are scored on a five-point scale. Researchers conducted the study with the intention of improving relationships between cats and their owners.

. . .Lead researcher Rebecca Evans said: “In our study, we developed a questionnaire measure of psychopathy in domestic cats.

“The questionnaire was developed using owner-provided examples of their cat’s behaviour in the context of the triarchic model of psychopathy (boldness, meanness, and disinhibition).

“We believe that like any other personality trait psychopathy is on a continuum, where some cats will score more highly than others,” she added.

“It is likely that all cats have an element of psychopathy as it would have once been adaptive for their ancestors in terms of acquiring resources (e.g., food, territory, mating opportunities).”

Yeah, look at that adaptive storytelling, which is taken from the original article, too: 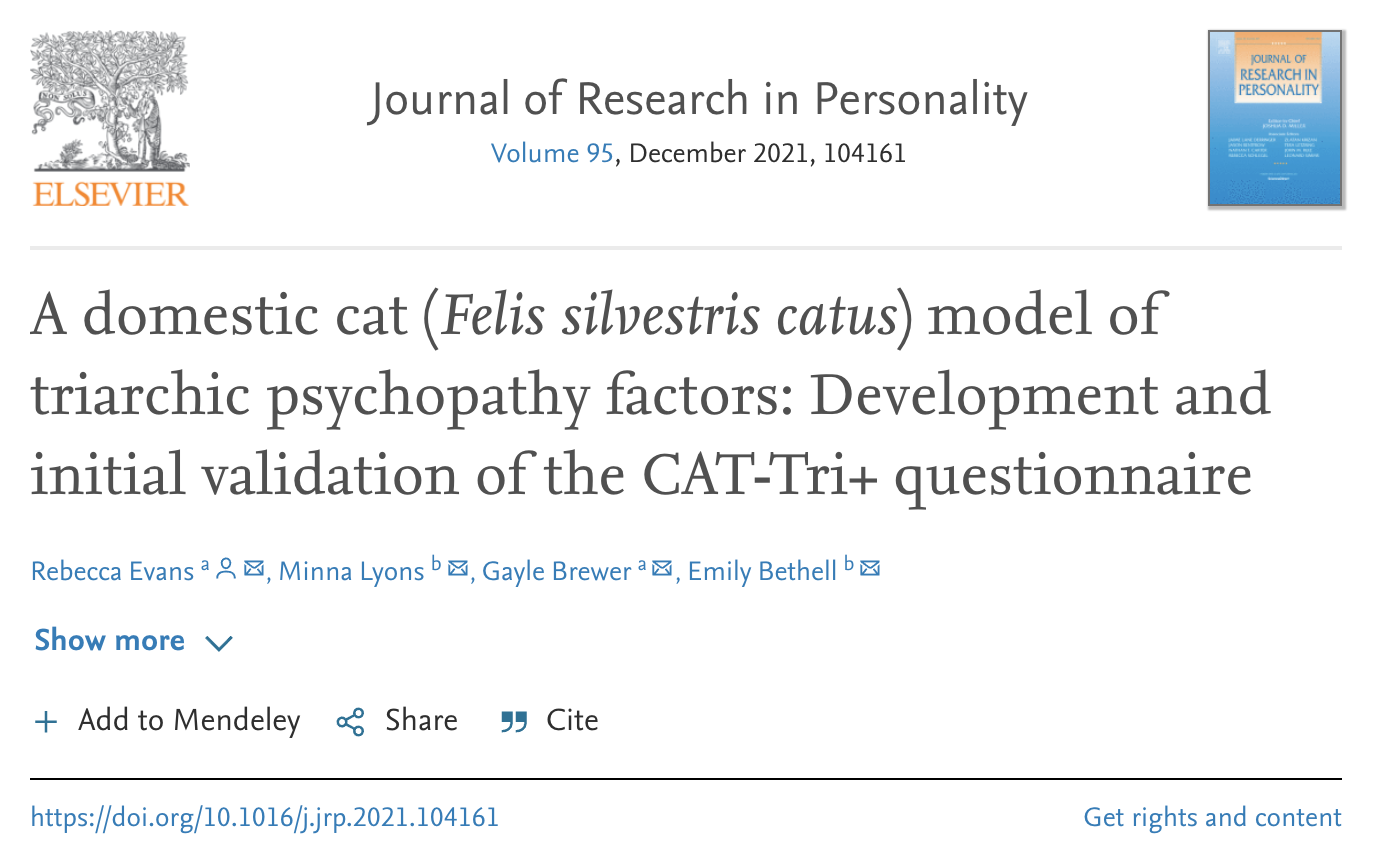 The article actually says that psychopathy in cats could be maladaptive today:

In evolutionary terms, psychopathy may no longer serve an adaptive function in the domesticated cat. In an ancestral environment that demanded self-sufficiency, wild cats that had higher levels of psychopathic traits may have been more successful in acquiring resources (e.g., food, territory, mating opportunities). These traits could have potentially increased the fitness of the ancestors, as well as optimized them for a solitary lifestyle (Bergmüller, 2010). However, the ability to acquire resources is largely redundant for domesticated pet cats. Evidence suggests that boldness in a domestic cat puts them at an elevated risk of Feline Immunodeficiency Virus (FIV) (Natoli et al., 2005); FIV is a viral infection that causes affected cats to have a weaker immune system (RSPCA, 2021). Boldness in domestic cats could also result in injury or death (e.g., in fights or road accidents). In fact, cats that were reported to boldly hunt by the roadside were 3.30 times more likely to have a road traffic accident (Wilson et al., 2017). Therefore, behavioral traits of triarchic psychopathy, though once adaptive, could be costly to a domestic cat.

Here are a few of the themes and the questions asks of the hundreds of cat owners surveyed. I have no comment except to ask “Why did they DO this study?”

8 thoughts on “Caturday felid trifecta: Facts about the manul; a gorgeous Maine Coon; are all cats psychopaths?”