We have a special treat today: Bruce Lyon, an evolutionary ecologist from UC Santa Cruz, stayed up late last night to prepare a special Christmas wildlife post, with wonderful photos of wild geese and two of his videos.  His words are indented, and you can enlarge the photos by clicking on them.

Here is a post about white geese, and the avian blizzard they sometimes produce. 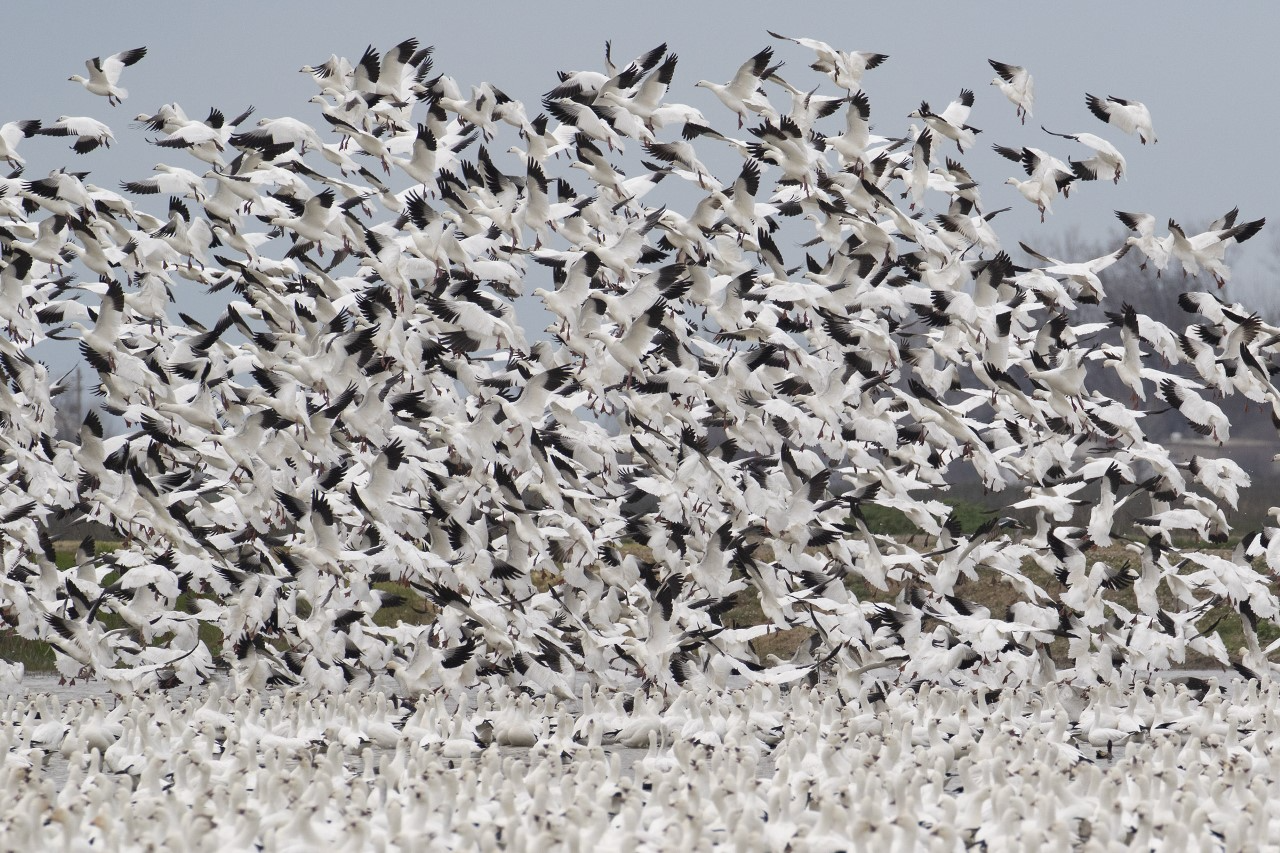 I thought I would add some holiday cheer with a blizzard, not of snow but an avian blizzard of white geese. The geese were mostly Ross’s geese, but a few snow geese were present as well. I photographed the geese at the Merced National Wildlife Refuge near the town of Los Banos in the Central Valley of California. I teach Ornithology every other year and I always take the students on a weekend trip to the Merced refuge. Merced never disappoints—depending on the day it can range from great to simply amazing. On one trip we watched a prairie falcon take out a snipe after a two minute chase and on another trip we watched a bald eagle snag a coot. But in terms of spectacles, it is mostly about the geese.

Below: It is often very foggy in the Central Valley early in the morning so we are often greeted with nice scenery. And until the fog burns off, the birds can be hard to see. 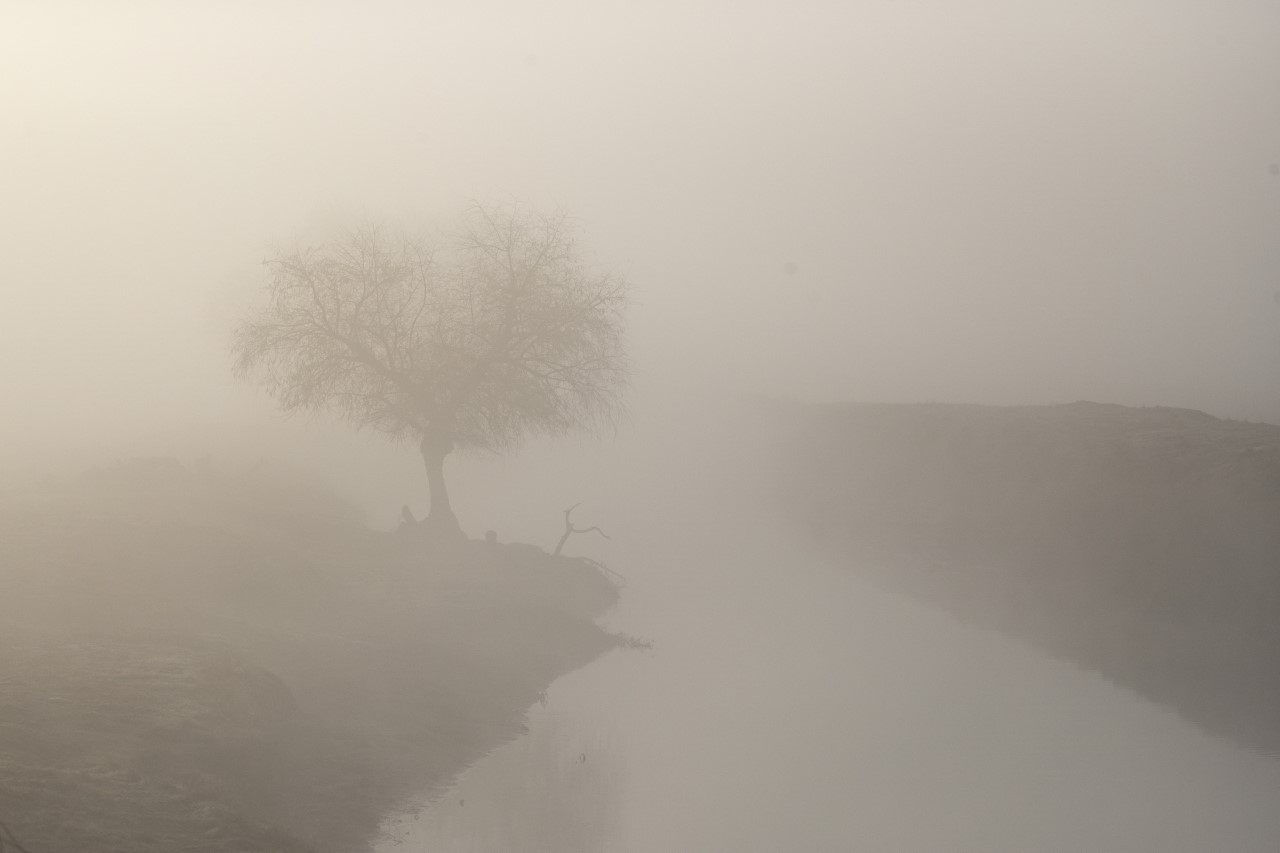 Below. The wildlife refuge has a loop tour road that circles the periphery of a large central wetland with areas of open water and extensive patches of bulrush. A flock of geese is flying over the marsh. 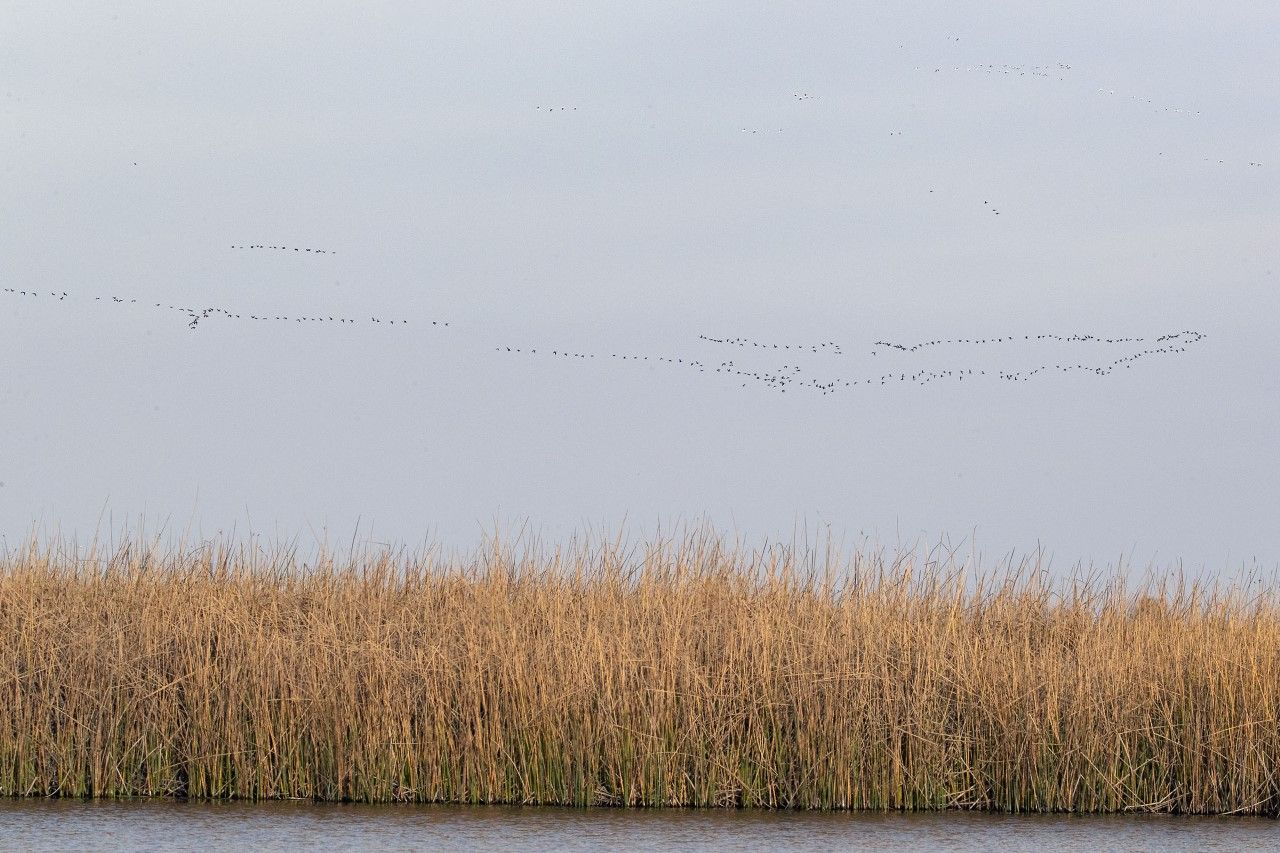 These wetlands have a rich diversity of waterfowl. We typically see 10 – 15 species per visit. But there are lots of other nice birds to see as well, such as this American bittern (Botaurus lentiginosus). 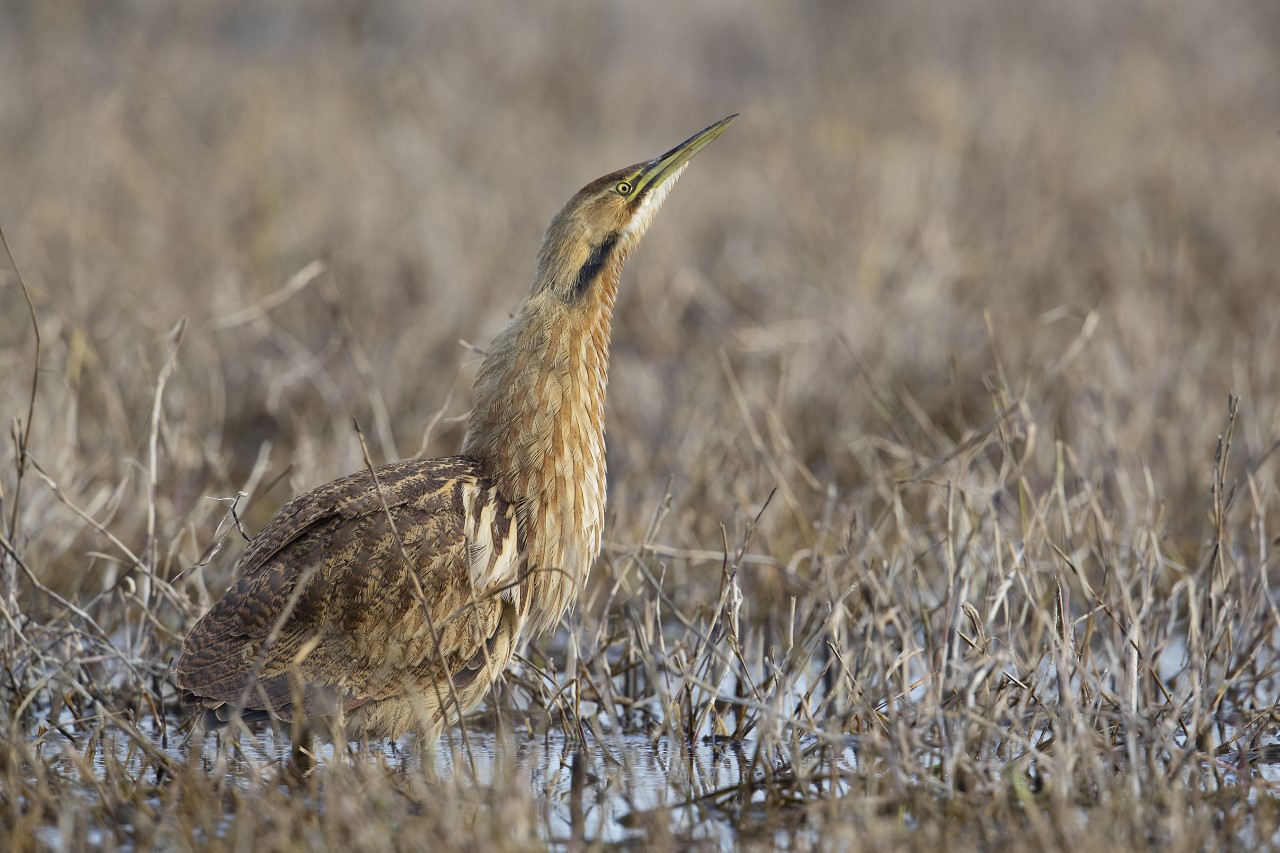 The white geese at the reserve can be either snow geese (Anser caerulescens) or Ross’s geese (Anser rossii). On some visits one can see mostly snows, on others it is mostly Ross’s.

Below: The two species are quite similar, but with a little practice can pretty easily be distinguished. Snow geese are larger, with chunkier beaks and they have a much more pronounced black ‘grin line’ along the middle of the beak. Some Ross’s geese also have fleshy grayish or pinkish ‘caruncles’ at the base of the beak, as can be seen in the individual below. Photos are not mine: Ross’s goose by Arthur Morris, snow goose not attributed.

Both of these white geese nest in colonies in the Arctic, out on the tundra, and migrate to California (and other locations) to spend the winter. Most of the Ross’s goose population winters in central California but snow geese also winter in many places in the eastern US as well.

Below: Geese migrate and winter in family groups—the young of the year stay with their parents. In the photo below the browner geese are juveniles and they are likely with their parents. The orange coloration on the heads of the adults is the result of staining from iron, apparently from the mud that that they forage in. One bird in the photo has a particularly orangish stain on its head. 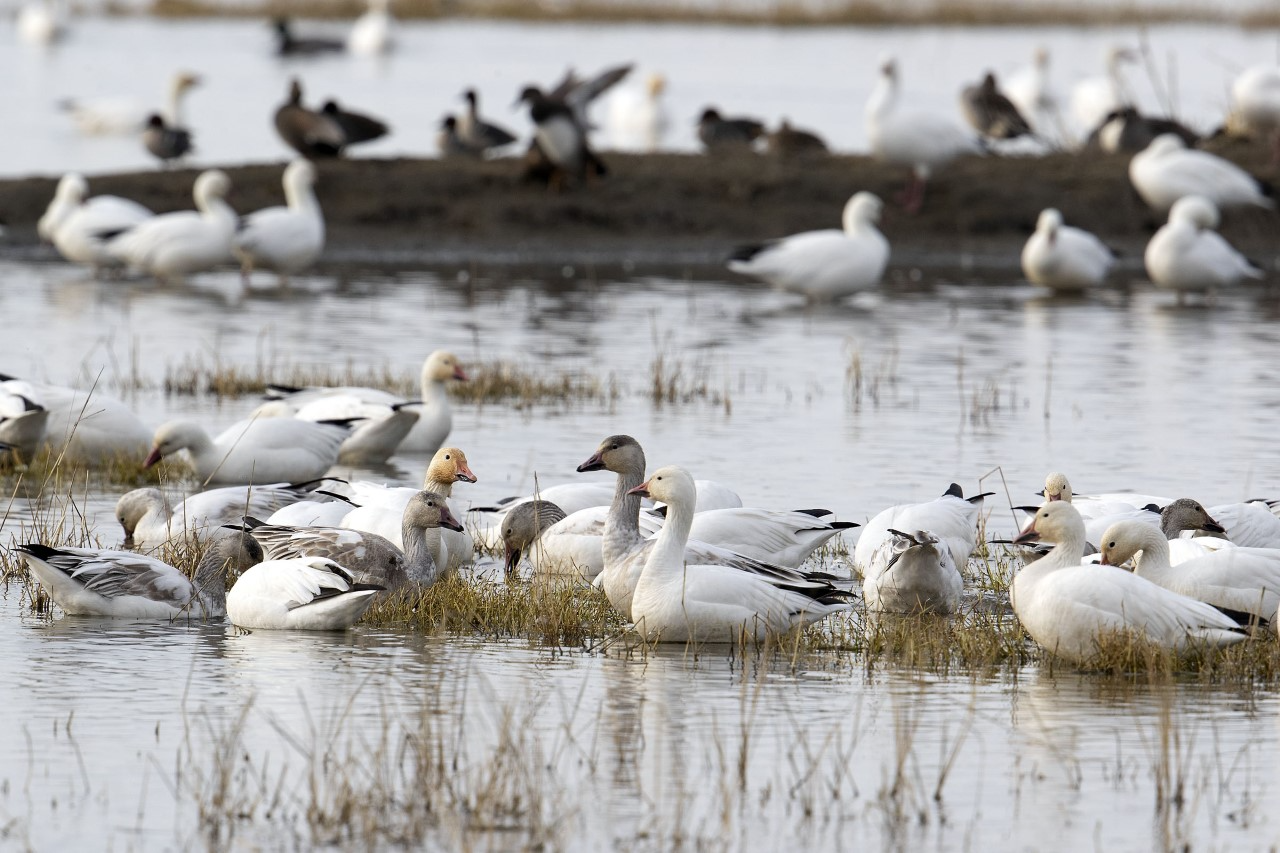 Below. Both species of white geese come in two color morphs—a white morph and a dark ‘blue’ morph. The dark bird with a white head in the right of the photo is a blue morph individual and I believe it is a snow goose. Blue morphs are very rare in Ross’s geese and also rare in western populations of snow geese as well, but blue geese are common in some eastern populations of snow geese. The other birds are all Ross’s geese.

One of my undergraduate professors at Queen’s University in Ontario Canada, Fred Cooke, did a long-term study of the ecological genetics and life history evolution in a population of snow geese breeding at Churchill Manitoba. One focus was to understand how the two morphs are maintained in the population. The work revealed that the color morphs are the product of a single gene and I believe in the end that there was no simple explanation for the maintenance of the two color morphs. The researchers also used the color morphs, and their simple genetic basis, in a clever way to identify goslings whose color was impossible based on the color of the parents in the nest they hatched from. Two behaviors could explain these color mismatches between goslings and the parents—female geese lay eggs in each others’ nests (within-species brood parasitism) or offspring that result from matings outside of the pair bond (‘extra-pair matings’). The authors used the plumage markers to estimate the frequencies of these two ‘alternative reproductive tactics’. 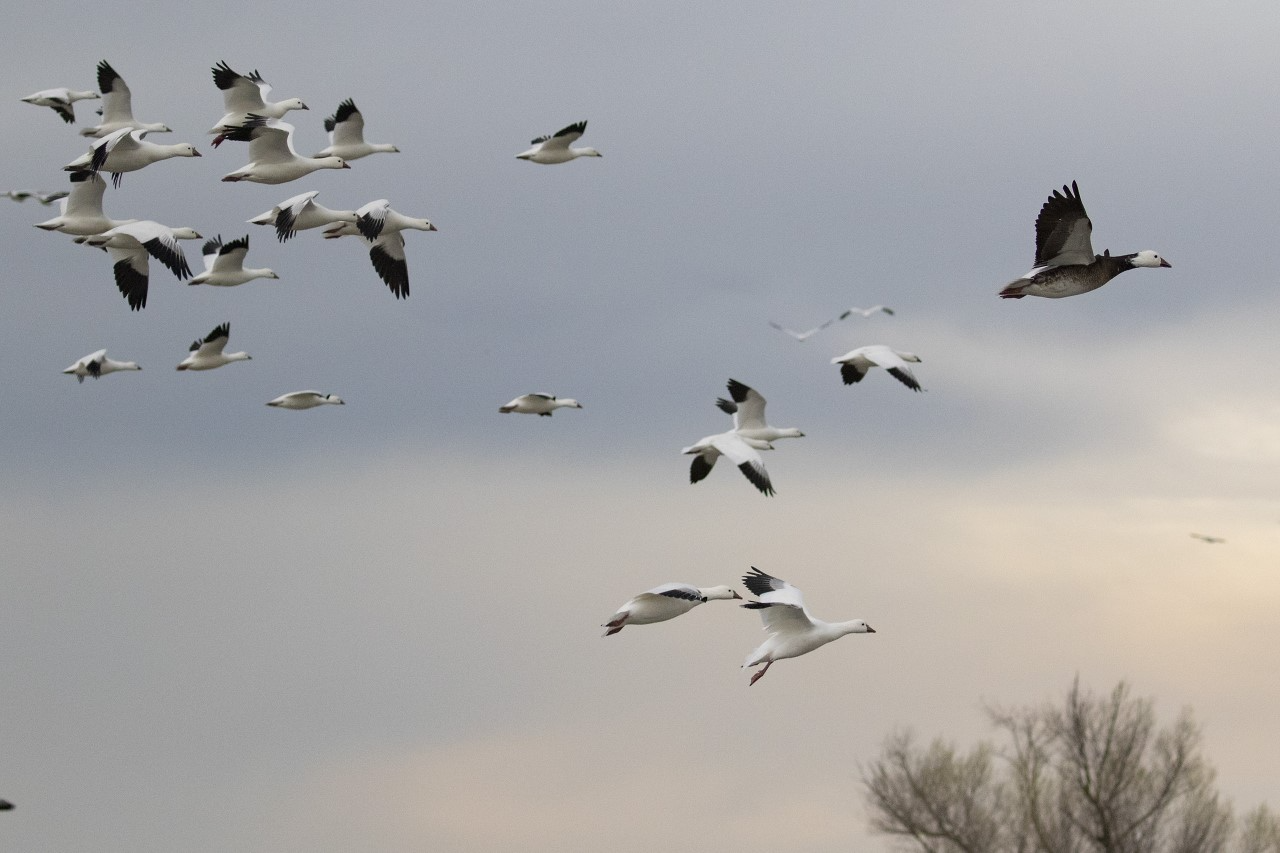 Below. The geese often rest in the marshes during the day but sometimes head out to feed in the fields away from the wetlands. Here a couple of thousand Ross’s geese rest in the marsh against a dramatic sky backdrop. 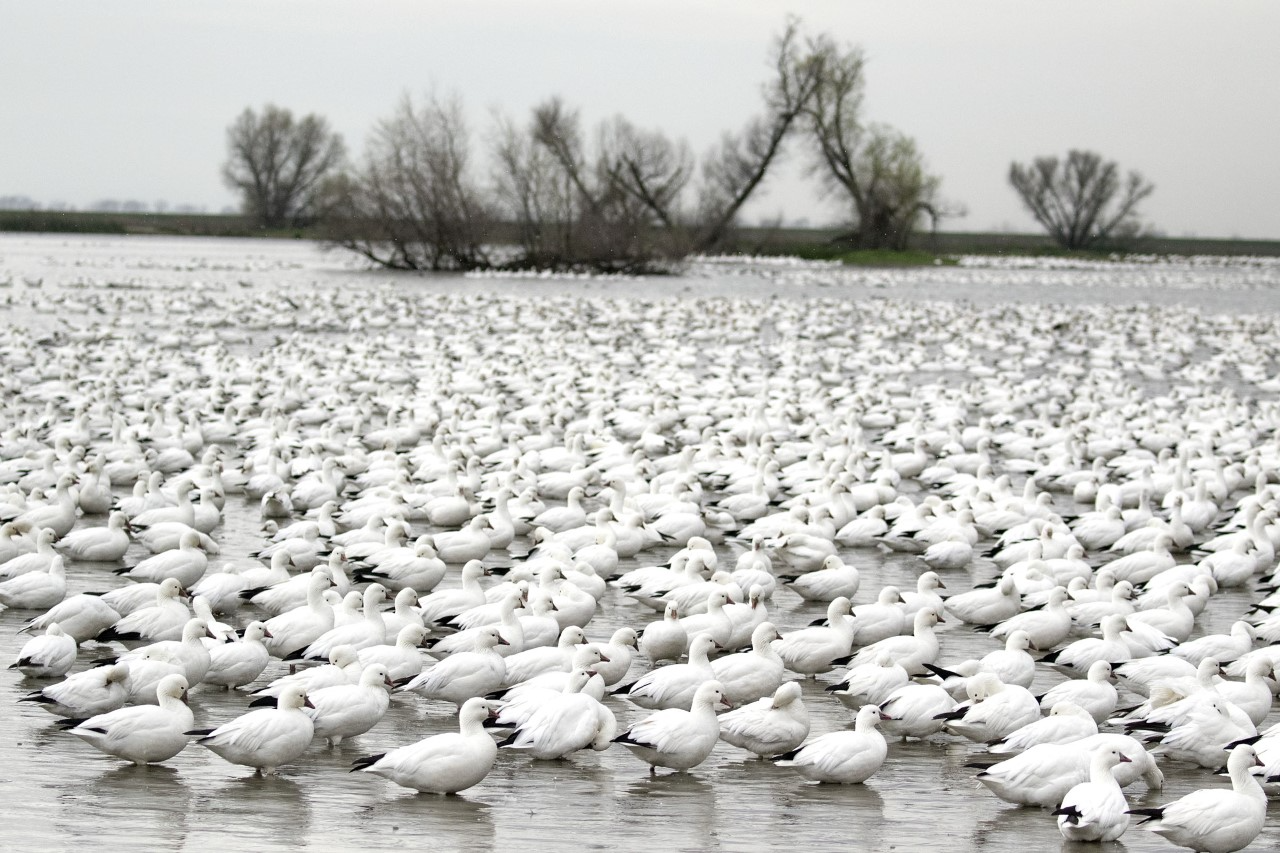 Below: A Ross’s goose shows off its wings. Many white birds have black wingtips (gulls, pelicans, storks)—I have read that the production of the black pigment melanin for some reason makes a feather stronger and more resistant to wear.  Presumably there is more wear and tear on the wing tips because of the aerodynamic forces at play, so it makes sense to make those feathers particularly durable. 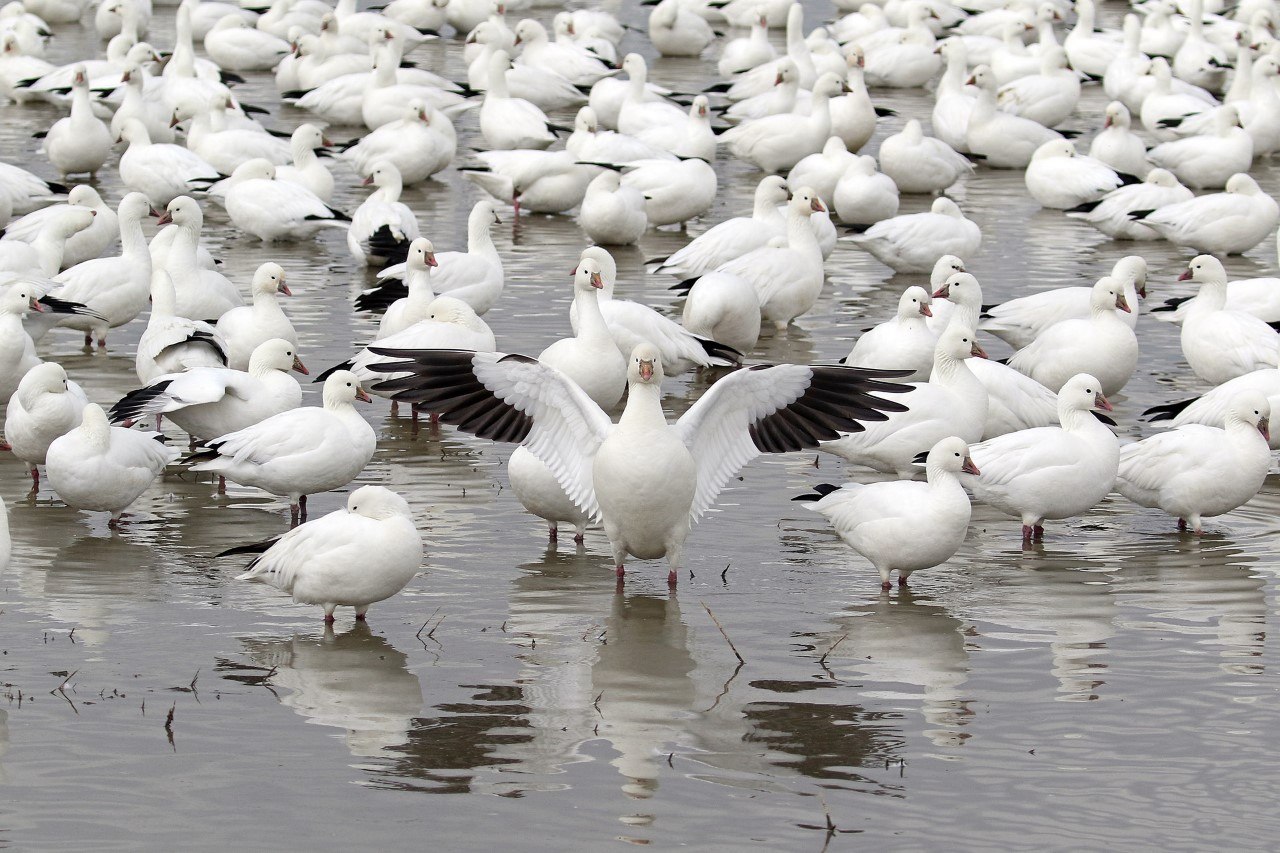 Below: A couple of photos of goose blizzards. The marsh can be calm and then all of a sudden a couple of thousand geese suddenly rise into the air in unison. Typically they all call as they take off so the spectacle is both visually and acoustically stunning to witness. These mass flights are often the result of the geese getting spooked when an eagle flies over the wetland, but sometimes it seems as if there is a false alarm, possibly  triggered by an overly reactive goose that spooks the entire flock. 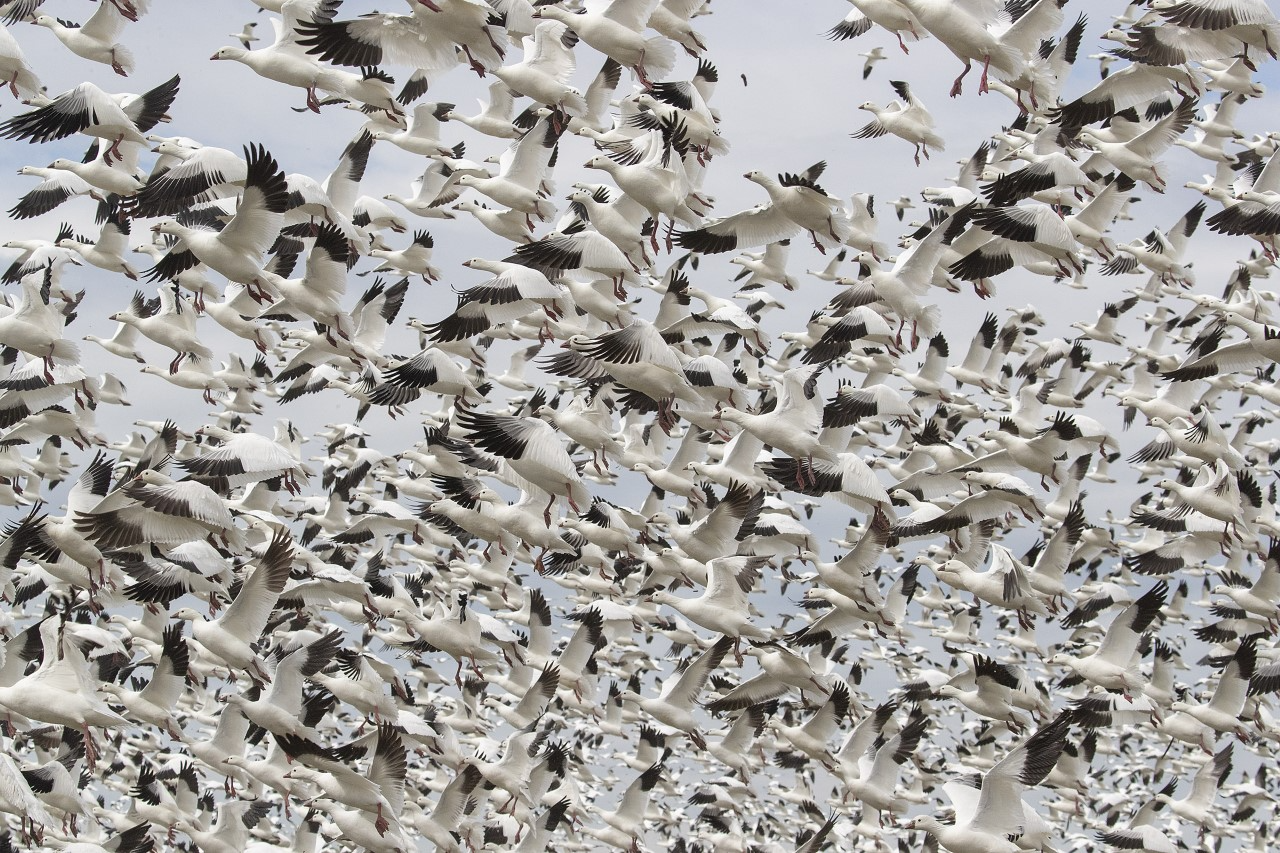 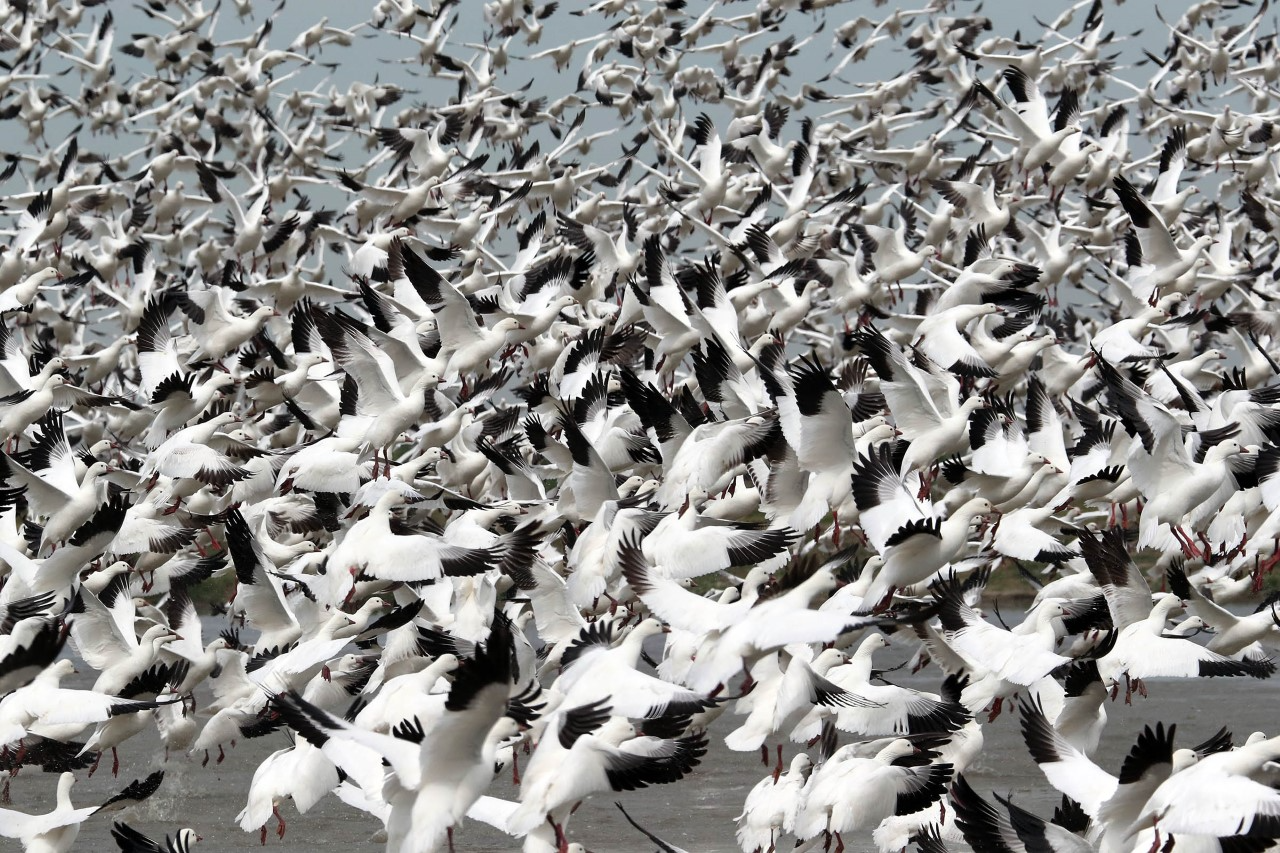 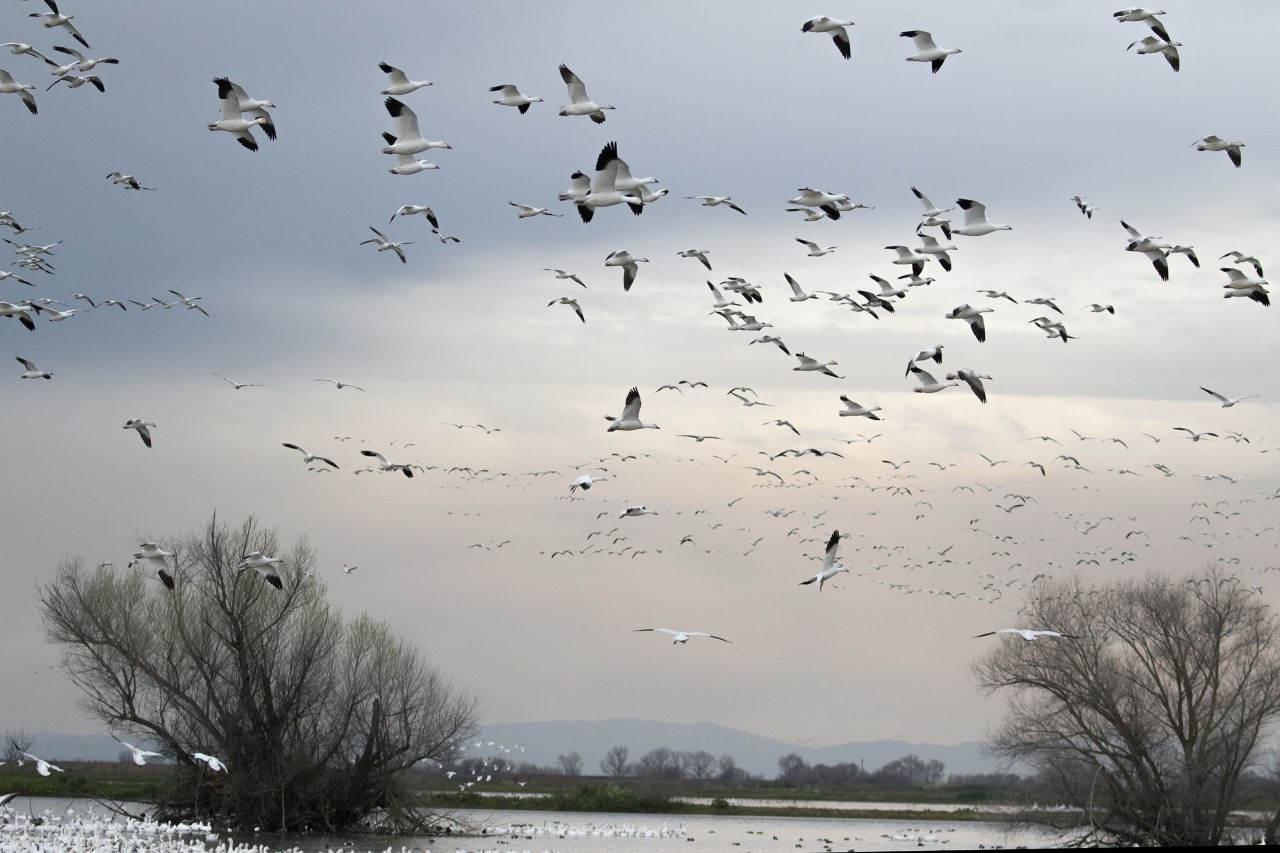 Below. Once spooked it does not take long for the birds to return. Their return to the wetland provides a great opportunity to photograph them in flight. 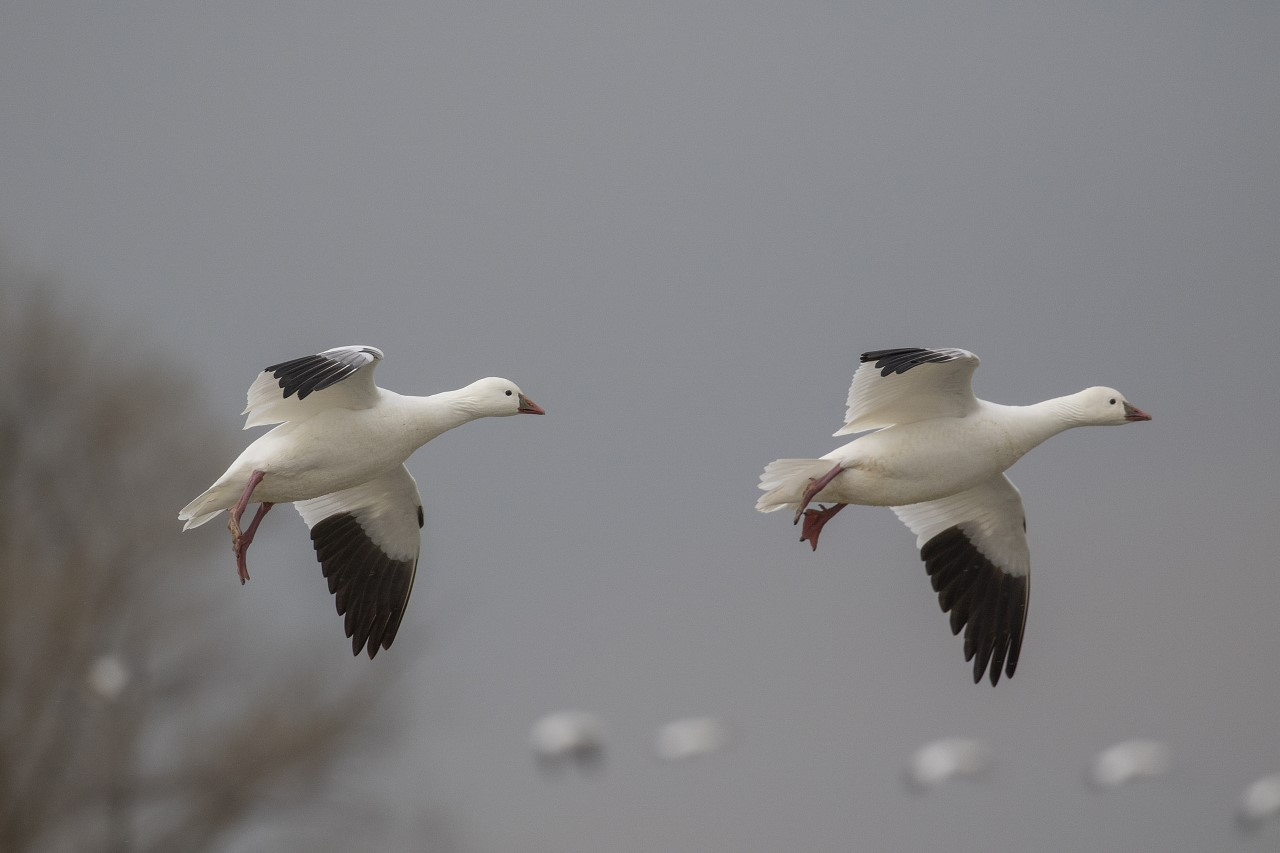 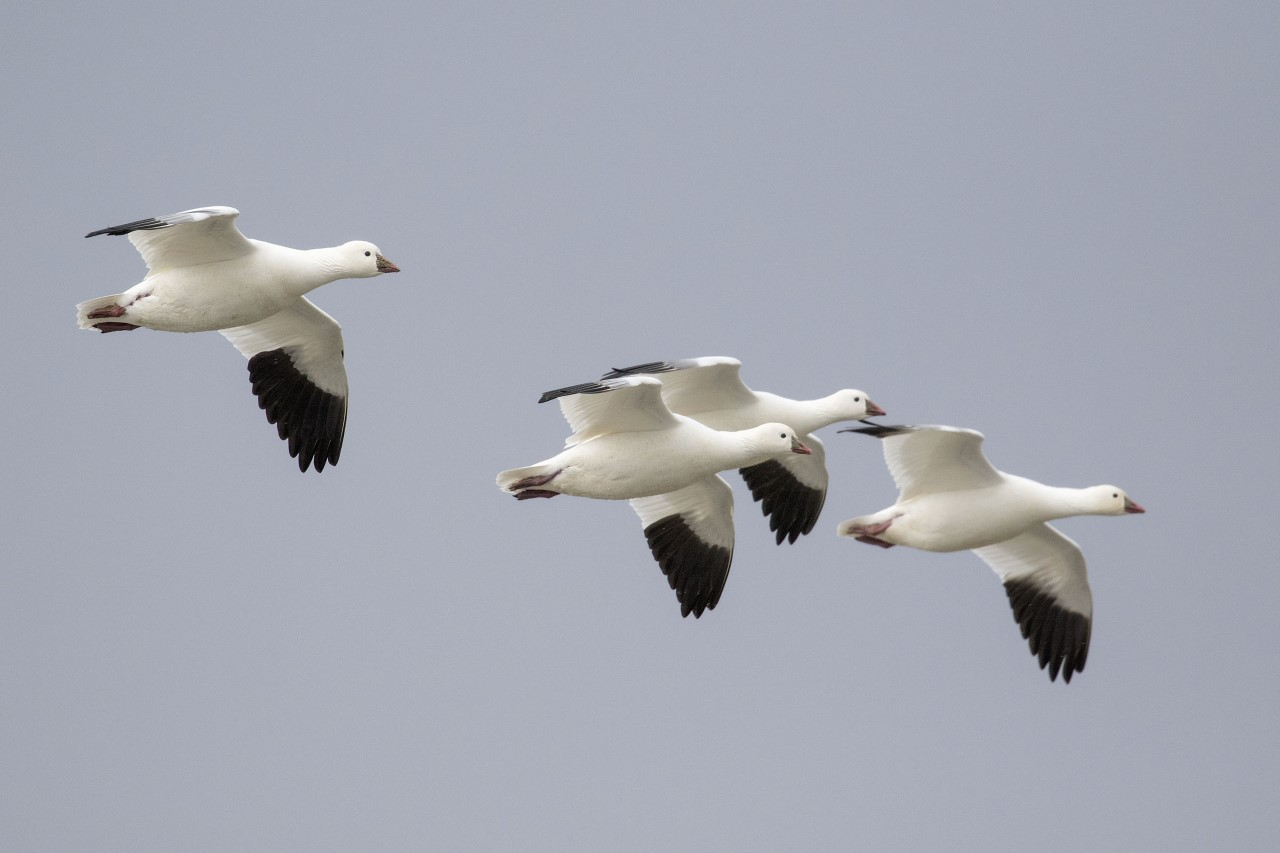 Below. A pair of Ross’s geese in flight. The bird on the left has particularly pronounced caruncles at the base of its beak. 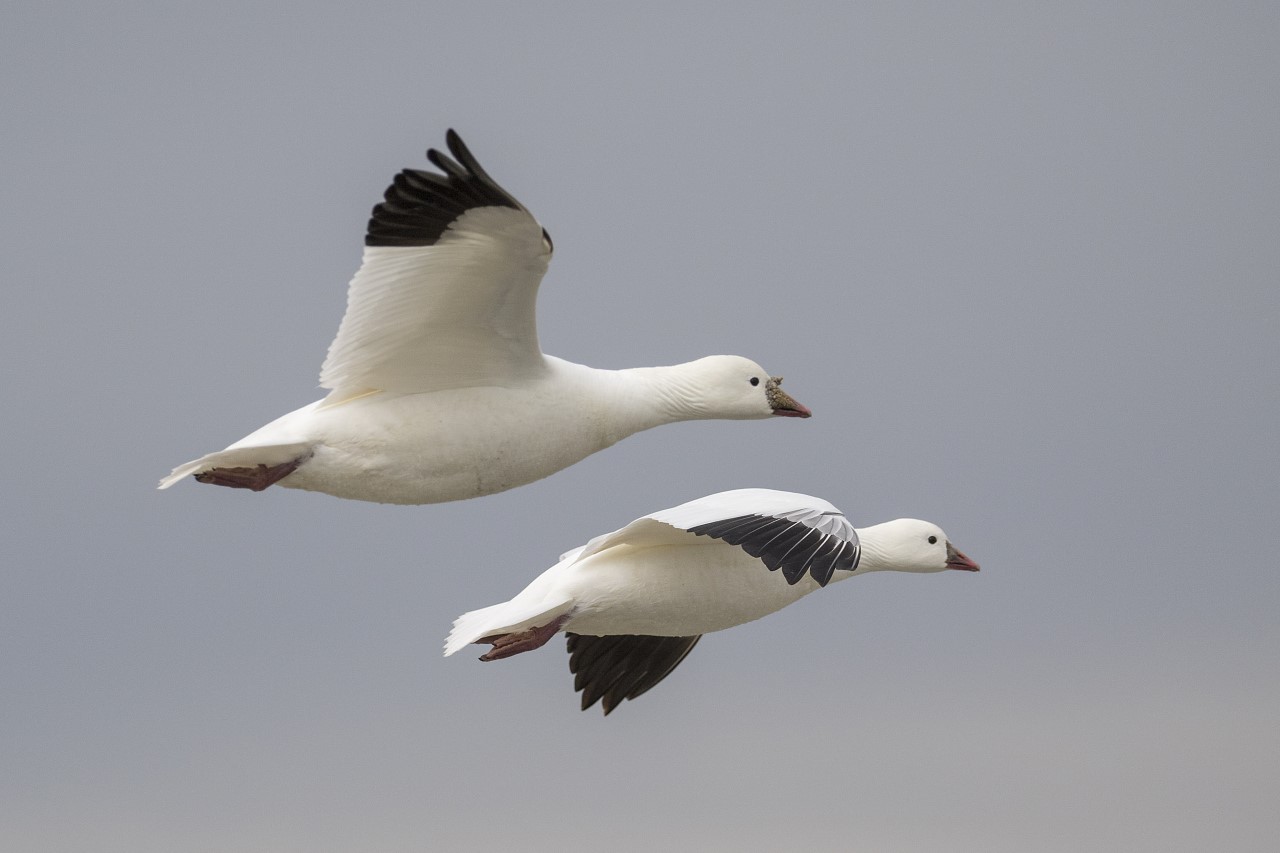 On one of my visits I stayed until dusk. The light was amazing and the birds were quite active, with huge numbers leaving the wetland to have a bed snack on the fields just adjacent to the marsh.

Below: Ross’s geese resting on the wetland in the evening just before the exodus to feed in the uplands. 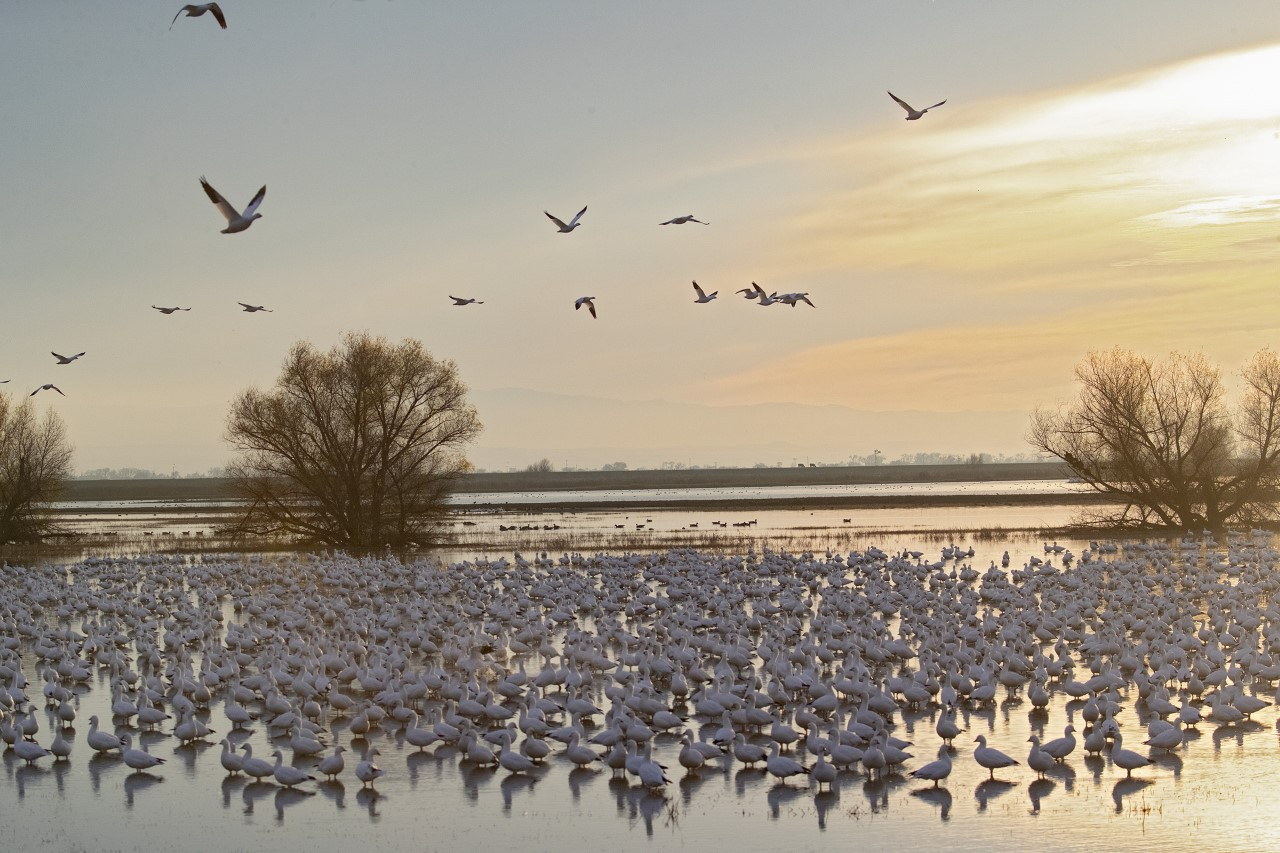 Below: Video of geese leaving the wetland to forage on the uplands at dusk.

Below: A small flock of Ross’s geese heading out for an evening bout of foraging. 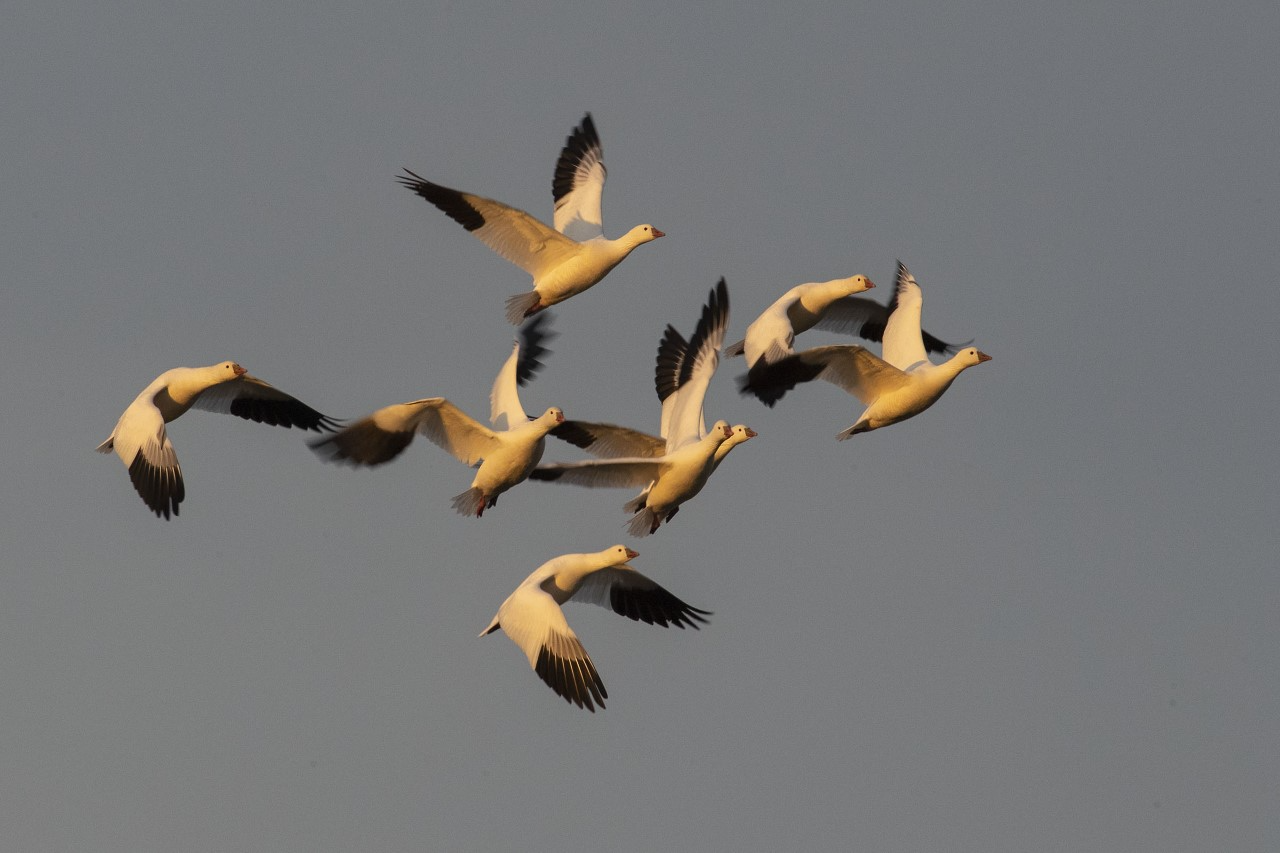 Below: Ross’s geese foraging in the uplands at dusk. 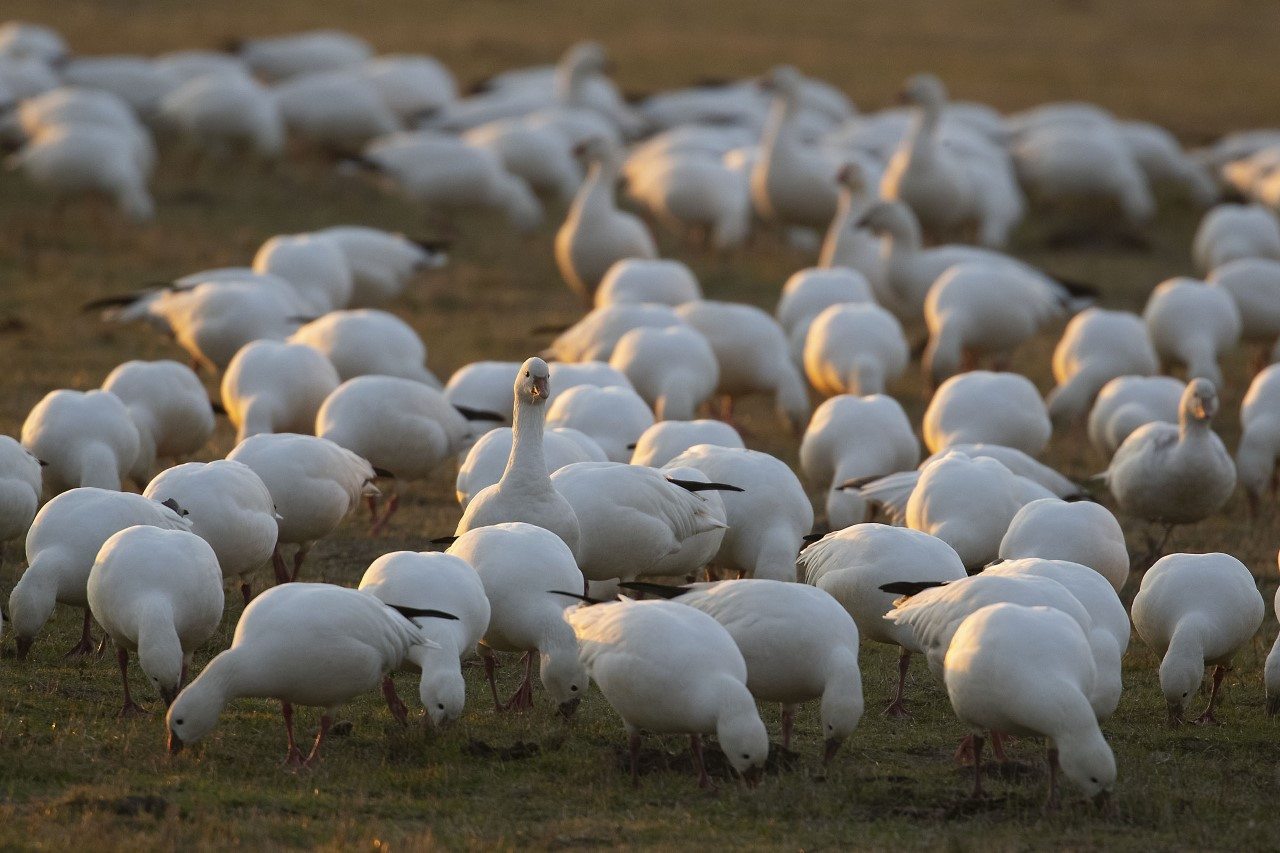 Below: At one point the geese foraged in a bizarre way—they formed in a long thin line, just as one sometimes sees domestic geese doing. 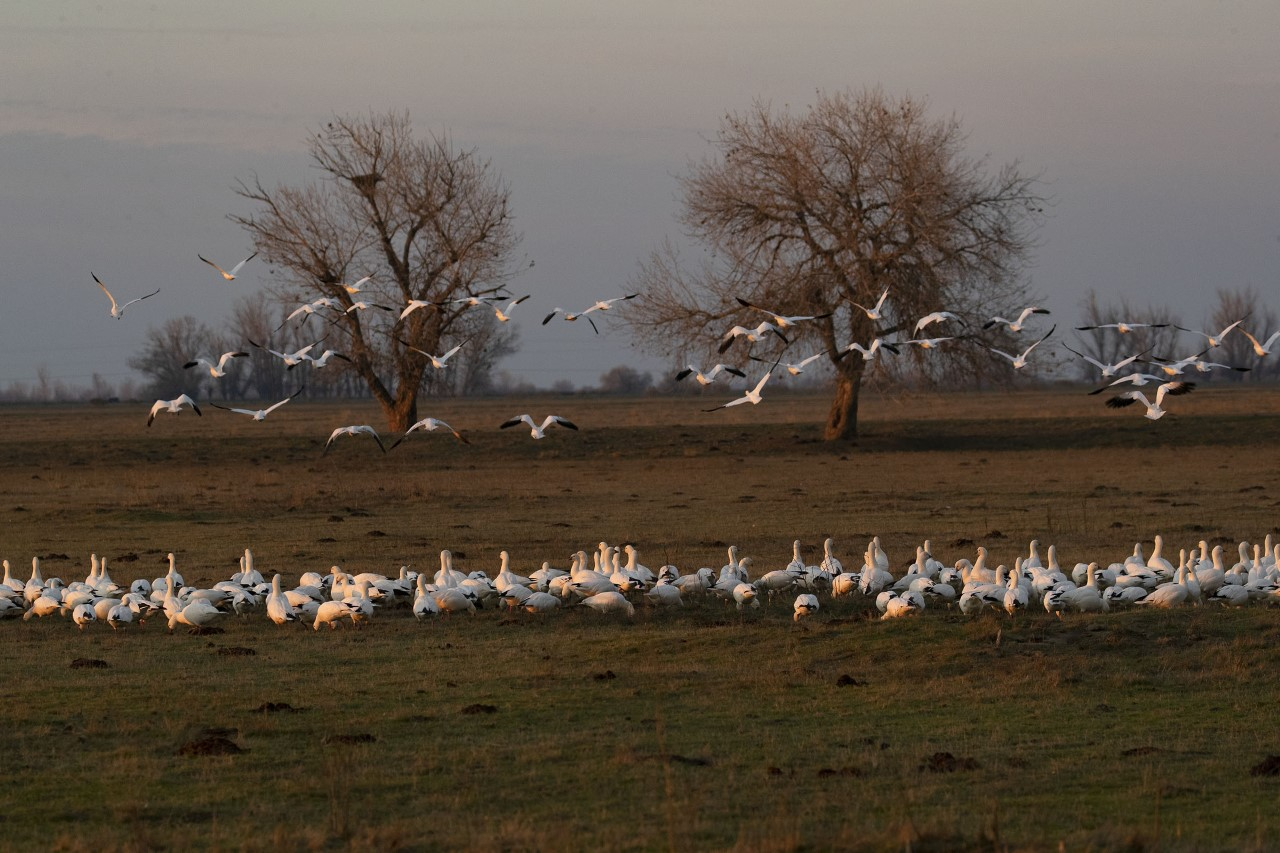 Below: A video of the geese in a line and then taking off.