There’s a time when “blarney” becomes crazy and harmful, and we have two cases that appeared at the same time.  The first represents the New York Times‘s recent presentation of woo in extenso, with almost no critical remarks. The editors are soft on astrology, they’re soft on dowsing, they’re soft on religion, and now they’re soft on a mixture of religion and spiritual healing. Click the screenshot to read: 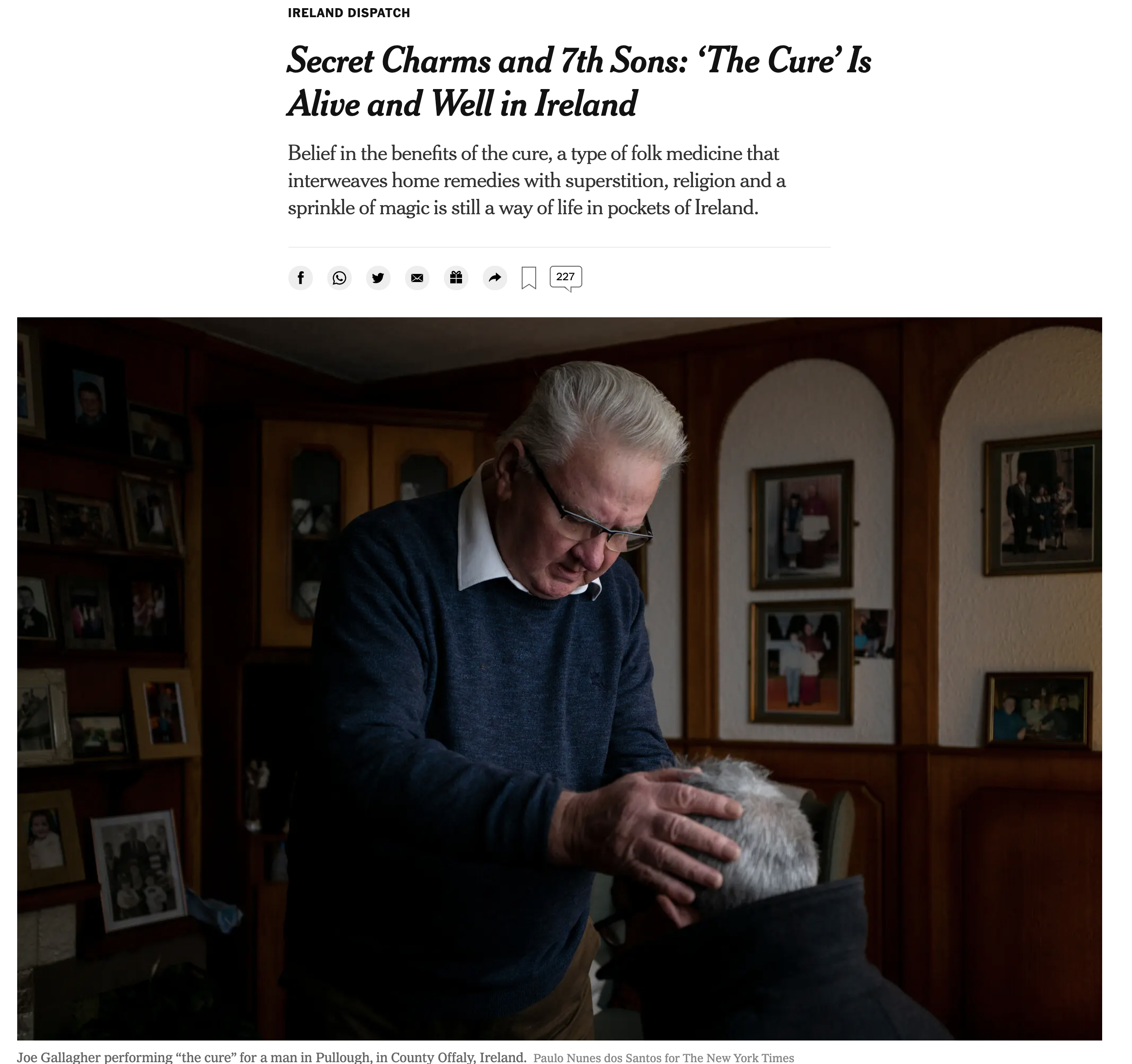 As the article reports, there are a number of faith healers in Ireland who have what they call “the cure”. It’s nothing new; it’s the old “laying on of hands” by believers, often accompanied by prayer, holy water, etc., to effect cures. The guy in the photo above, Joe Gallagher in Pullough, is the seventh son of a seventh son (not that rare in Catholic Ireland, but increasingly rarer), and this is supposed to give him special healing abilities. Here’s how the author, Megan Specia, describes “The Cure”:

Mr. Gallagher is just one of hundreds of men and women across Ireland who are healers, or have “the cure,” an approach to health care that interweaves home remedies with mysticism, superstition, religion and a sprinkle of magic.

It’s part of a belief in folk medicine, curing charms and faith healers that is still a way of life for many in Ireland, if a fading one.

Some who are believed to have the cure are seventh sons, like Mr. Gallagher, a birth order long thought to bestow special powers.

Others are keepers of family customs that range from rituals, prayers and charms to herbal tinctures, offered up as treatments for everything from burns and sprains to rashes and coughs.

Since his childhood, people have sought out Mr. Gallagher. “I think you must have the belief,” he said, acknowledging that the process doesn’t always work. “I wouldn’t say that I can do miracles.”

People come from miles around to see healers like Gallagher, who are reputed to cure things like:

Bart Gibbons, 57, who owns a grocery store in the village of Drumshanbo in County Leitrim, has a cure for warts that was passed down from his father and his father’s father before him.

It involves taking a bundle of rushes and saying a combination of prayers as they are held over the affected area. Then, he buries the reed-like plants. The belief is that when they decay, the warts are gone.

They don’t get paid, so at least that’s good, but have they done controlled trials with these shamans? I don’t think so. At least they’re cheaper than doctors, but isn’t there a form of national healthcare in Ireland? And, as you know, warts sometimes go away by themselves.

The only comments that are negative in this longish piece are these:

Attributing positive outcomes of the cure to something like a placebo effect makes sense to Ronald Moore, an associate professor of public health at University College Dublin who has spent years researching folk cures and who emphasized there is little scientific evidence for the efficacy of these practices.

Well, then, why not just give the people sugar pills? And the statement above is quickly followed by this:

But that doesn’t mean the medical community completely dismisses potential benefits, with some doctors known to send their patients for the cure, often for skin issues or other minor troubles.

“Modern practices on the one hand pooh pooh this, as scandalous and outrageous and quackery,” Dr. Moore said. “But in fact, and in reality, they utilize it.”

Those doctors are shameful. At least they don’t send patients to the Irish shamans for maladies like cancer and heart disease. (Shamans may, however, try to cure people of more serious stuff.)

Although the practice is “deeply religious”, it works on dogs, too!  Can dogs lose their ailments by “The Cure”? I thought Edward Feser maintained that dogs don’t have souls. But here’s the last picture of healing in the piece; I’ve included the paper’s caption. The picture makes me laugh out loud: a real LOL:

Once again the New York Times is touting quackery by publicizing it and only bringing in one lone dissenter, who is immediately countered by a physician enthusiast. What is going on with this newspaper?

This article with its hilarious title is a serious piece in another Times—the Irish Times. Being a Catholic coutry and all, I suppose papers there have more article like this one. If you read the piece, you’ll see that “lay theologian” (indeed!) Brendan Butler is deeply besotted with God and baby Jesus, the “eternal Cosmic Christ.” And Jesus is said to be the “culmination of 13.8 billion years of evolution.” This implies that evolution in humans has stopped, but yet we’re still evolving and so is every other species.  Read and weep to find out why Jesus is the End of Evolution: 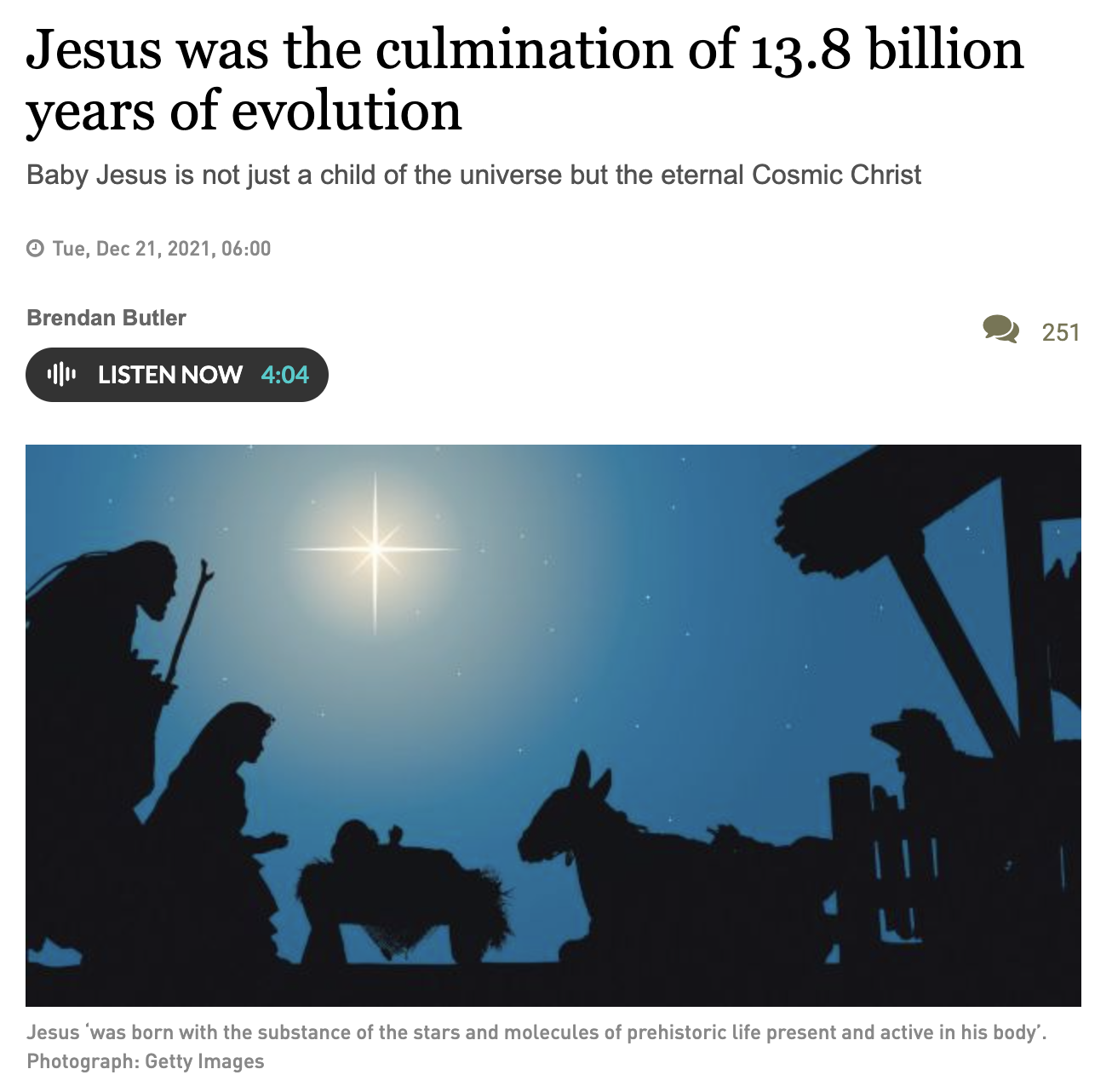 Okay, here’s the whole scientific explanation of why Jesus is the culmination of evolution (it’s part of a longer piece that sounds like a sermon):

How to reconcile a human and a divine nature in one person became the subject of controversy until it was resolved in 431 at the council of Ephesus by declaring Mary as ‘Theotokos’ – the mother of God.

But this led to another question: why did the eternal creator God become a mortal and fragile human creature? Various explanations were put forward, with the most common being that it was necessary for God the Son to become human and die on a cross for the sins of the human race.

However, another explanation associated with the Franciscan theologian John Dun Scotus, fits in with our post-Darwin, post-Einstein and post-Hubble world. In this view the baby Jesus, born in Bethlehem, was the culmination of 13.8 billion years of the evolutionary process.

He was born with the substance of the stars and molecules of prehistoric life present and active in his body. In this Christology the baby is not just a child of the universe but the eternal Cosmic Christ who released that primal energy which burst forth and created the universe.

This Christ remained an integral part of the evolutionary process, sustaining it and driving it forward towards greater and greater complexity until the apex of that movement emerged as homo sapiens.

It was always God’s plan that the creator Christ, already present in the universe as an invisible presence, would become fully human and be born as a human being.

I think Mr. Butler should take a course in evolution, where he’d learn that there is no evidence that evolution is teleological, and that it was going on for 3.5 billion years before Baby Jesus was born. Who sustained evolution until then?  But I’m pleased to learn that Jesus, like the rest of us, was made of billion-year-old carbon. Still, he’s got to get himself back to the garden (of Eden).

It’s just tripe, of course, but why would the Irish times give a millimeter of space to stuff like this?

Below: the author with the paper’s caption; Butler is apparently Jesus’s ghostwriter: