The article below is from the conservative National Review, but of course if you want to find out what’s going on with colleges and universities, especially vis-à-vis free speech and academic freedom, you have to look at right-wing sources. This is not to imply that the Right doesn’t censor or suppress speech, but since most colleges, university faculty, and administrators are on the Left, as is the mainstream media, the latter tend not to cover the excesses of the former.

What’s more, the article was written by two undergraduates. Abigail Anthony is a junior studying politics and linguistics, and Myles McKnight a junior studying politics, as well as president of the Princeton Open Campus Coalition.  It’s remarkably thoughtful and well written, and should serve as a lesson for Princeton—though it won’t since the Woke Tiger Train has left the station.

What I espcially like about is thqt it mentions and urges that Princeton adhere to the tenets of the University of Chicago’s Kalven Report, which prohibits official statements from our administration, departments, or units of the university about politics, ideology, or morality. (Rare exceptions involve issues that affect the University’s functioning.) I’ve written a lot about Kalven before, as I think every university should have such principles, but I think we’re the only one in the world. Kalven was explicitly designed to promote free speech—to prevent junior faculty, students, or timid professors from self-censorship out of fear that they’ll get in trouble for violating “official” University politics. 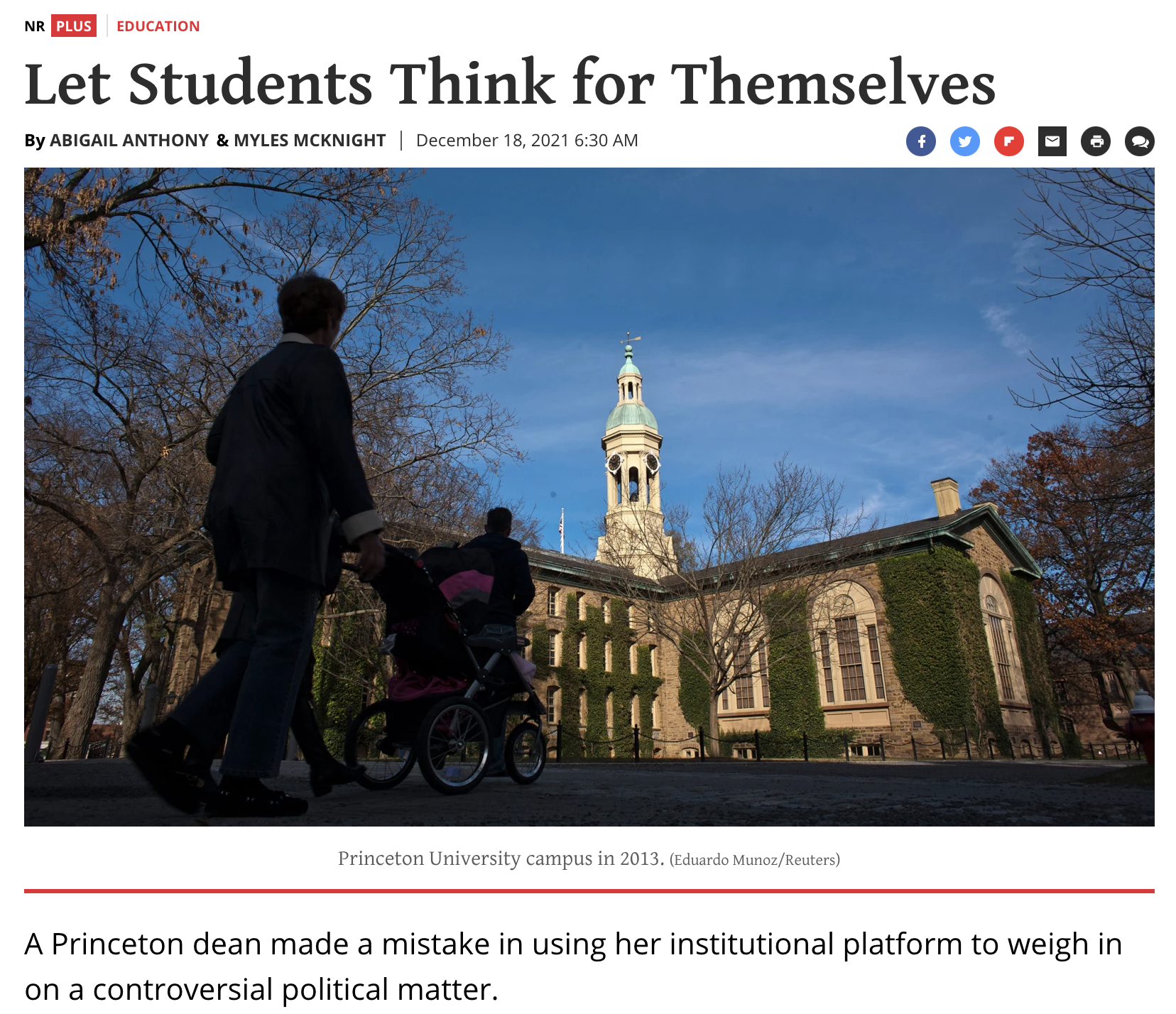 The two undergrads apparently understand the meaning of Kalven far better than do their administrators and faculty—and better than many University of Chicago professors, whose departments have blatantly violated Kalven time after time. I’ll quote from their letter:

An academic institution committed to truth-seeking and open inquiry should foster an environment in which students feel welcome — even encouraged — to speak up on controversial issues about which reasonable people of goodwill disagree. But as Princeton students and frequent critics of the ideological orthodoxy that pervades our campus, we’ve witnessed our peers retreat from conversations, opportunities, and even friendships out of fear that their deeply held beliefs will cost them academically, socially, and professionally.

A university hinders its truth-seeking mission when it — unintentionally or otherwise — prompts students to think twice before expressing unpopular but reasonable points of view. This can occur when officials violate the basic institutional neutrality required for the university to be a home for the free marketplace of ideas. When an educational institution adopts official stances on controversial issues not directly connected to its core mission, it suggests parameters around an otherwise liberated discourse. This effect is enhanced when such pronouncements are morally tinged; in these cases, the university would appear to have decided that such parameters are morally requisite. By implication, those who defy them are morally suspect.

The “basic neutrality” ideal isn’t new. The most famous defense of the principle was offered by faculty at the University of Chicago during the height of the Vietnam War. Chicago’s Kalven Committee made the point succinctly: “The university is the home and sponsor of critics; it is not itself the critic.” The Kalven Report, long celebrated, is still operative at the University of Chicago. Universities everywhere should consider adopting the report’s guidance, as well as the university’s famed Free Speech Principles, which Princeton formally did in 2015.

Anthony and McKnight give several examples of the violation of “basic neutrality”, but concentrate on one at their own school: an official statement by Dean Amaney Jamal of the School of Public and International Affairs, issued after the Rittenhouse verdict.  Conveyed by email to the entire study body of her department, Jamal’s statement went like this:

[Dean Jamal decried] Kyle Rittenhouse’s not-guilty verdict. She lamented with a heavy heart the “incomprehensib[ility] . . . of a minor vigilante carrying a semi-automatic rifle across state lines, killing two people, and being declared innocent by the U.S. justice system.” Furthermore, she situated the verdict within the context of the racism embedded “without a doubt . . . in nearly every strand of the American fabric,” thus implying that defenders of a not-guilty verdict are defenders of racism.

“What we do know without a doubt is there are racial inequities in nearly every strand of the American fabric. Today’s verdict employs me to ask you — our current and future public servants — to investigate our policies and practices within the justice system and beyond. How can we use evidence-based research in pursuit of the public good? What role do we play, and what obligation do we have to serve?”

These are moral judgments that push an ideological line hewing to CRT (it’s similar to Kalven-violating statements of some University of Chicago Departments, which we’re trying to remove). As the title of their article notes, Dean Jamal is telling students what to think—in an official communication.  Not only that, but she’s telling them how to act.

The authors and 60 of their fellow undergrads then wrote a letter to Princeton’s President Christopher Eisgruber, a letter that you can see here.  Here’s a short excerpt of a letter that is, in effect, a bunch of students giving a college dean and president a hard spanking on the tuchas:

. . . What motivates our letter is a concern about the implications of a University administrator, speaking in her official capacity, promulgating to an entire community of students her moral evaluation of the outcome of a highly publicized and controversial trial. Her doing so in effect places SPIA’s institutional support behind a particular position on a matter which, as it engages the interests of so many, should invite a vigorous and respectful conversation amongst students and faculty alike.

Instead, students and faculty are left to read that a Dean has adopted a definitive stance on a matter about which reasonable people of good will can and do disagree. Dean Jamal writes with a “heavy heart” as she decries the “incomprehensib[ility]” of a not-guilty verdict, labels the defendant a “minor vigilante,” and situates the alleged outrageousness of the trial’s outcome within the broader context of racial inequalities pervading “nearly every strand of the American fabric.”

Each of these features––the verdict, the alleged vigilantism, and the systemic racism claim––are the subjects of genuine debate among serious legal commentators and academics. Contrary to Dean Jamal’s forceful assessment that some of these issues––viz., the systemic racism allegation––are settled “without a doubt,” these topics occupy the debates of students, faculty, and the public at large. Though no one claims that Dean Jamal’s statement directly forces dissenting students to remain silent or to affirm what they do not believe, it is no stretch to conclude that the establishment of an institutional position tends to draw restrictive parameters around a dialogue that would be otherwise unfettered.

The reply, much to their (and my) dismay, was disingenuous:

. . .President Eisgruber responded to our complaints by denying that Dean Jamal had spoken in her official capacity. He suggested that the dean “quite clearly stated that her views about the Rittenhouse verdict were her own opinions” and that “she framed her comments in very personal terms.”

We wonder whether President Eisgruber read the same statement we did. Nowhere did Jamal clearly state that she was speaking in a personal capacity. To the contrary, she qualified her views by writing “As dean of a School of Public and International Affairs . . .” She promulgated the message on her school’s official email server. What’s more, she employed her institutional authority to summon SPIA’s resources, offering a space for affected students to “process” the outcome of the trial in the company of a counselor. Was Jamal writing as an academic or as a dean? We believe she provided a clear answer.

Pardon my French, but Eisgruber’s response is equivalent to what comes out of the south end of a bull facing north.  This certainly was an official statement in any reasonable view.  Now the dean has a right to speak for herself, though, as dean, she should be wary of doing so since it still comes off as “official”.  But she certainly does not have the right to issue such a statement as dean and send it over Princeton email to a list of Princeton students.

Thank Ceiling Cat for brave Princetonians like Anthony and McKnight, who were NOT chilled by Dean Jamal’s statement and had the guts to not just write a letter to the President, but also to publish a piece in the National Review. I don’t know their politics, but I congratulate them and wish them well. They are, after all, allies in the fight for freedom of speech. They understand that concept better than the Grand Poobahs of Princeton:

To students who frequently dissent from campus orthodoxy, statements like Jamal’s are as frustrating and alienating as they are inappropriate. All university officials — especially those at Princeton — have a duty to facilitate an environment conducive to the full realization of the institution’s truth-seeking mission. Reasonable neutrality provides a starting point for the fulfillment of that responsibility.

I have a notion to write an email to President Eisgruber, perhaps attaching a copy of the Kalven Report. . .