Welcome to Friday, December 3, 2021: I hate to say this, but it’s National Peppermint Latte Day. This is in line with Coyne’s Fourth Dictum: All beverages save beer eventually revert to confections. 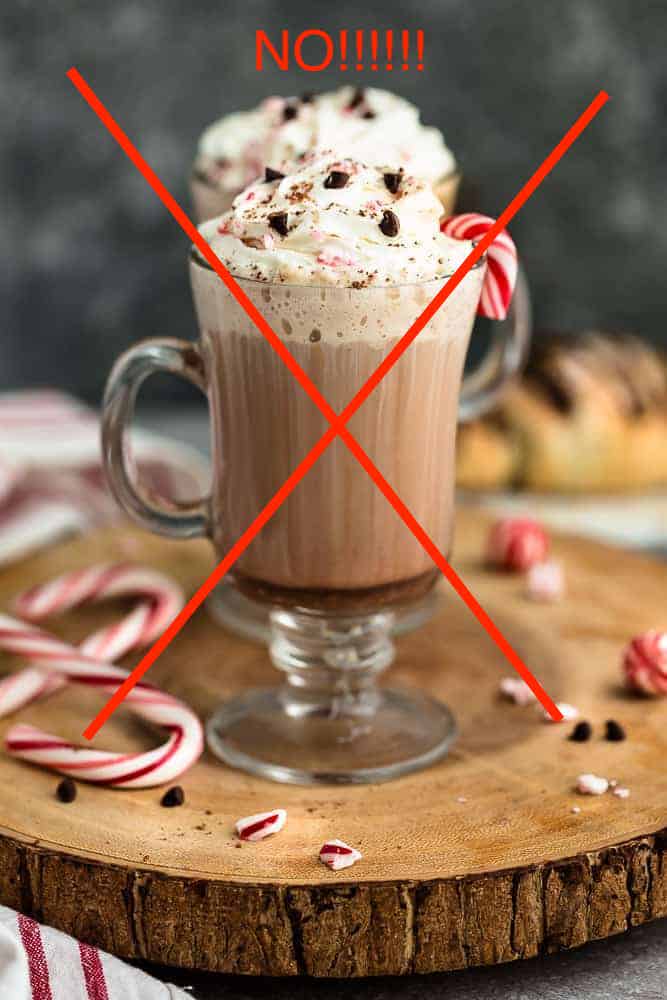 *The Omicron variant of Covid-19 has been found in three states beyond California: Colorado, Minnesota  and New York, which itself reported five cases. It will soon be everywhere. Biden is considering measures like vaccine mandates for domestic flights, stricter regulations for travelers entering the U.S., and there’s more:

Get ready for that Omicron booster!

*In a discussion of abortion law, four NYT columnists—Ross Douthat, Charles Blow, Michele Goldberg, and Lulu Garcia-Navarro, give their predictions about how the Supreme Court will rule in the Mississippi abortion case. All of them agree that Roe will be overturned in spirit if not in letter, but of course they differ in whether this is a good result and what the consequences will be for both women and the Democratic Party.

Every news source I can find—on both Right and Left—said that the outcome of the case was almost assured given what the Justices said during oral arguments. We’re about to enter another tumultuous time given that at least 24 states will outlaw abortion or make it very difficult to get if Roe were overturned. I cannot understand how any legislator can force a woman to bear a baby (as Mississippi does) if that fetus was the result of rape or incest. What kind of human could decree that?

*As for a good critical op-ed on the topic, read Linda Greenhouse’s “The Supreme Court gaslights its way to the end of Roe.” (Greenhouse covers the Supreme Court for the NYT.) She covers not only the history of the earlier decision, but shows how appalled she is at what’s going on now. Amy Coney Barrett comes in for special criticism:

Justice Barrett’s performance during Wednesday’s argument was beyond head-spinning. Addressing both Ms. Rikelman and Elizabeth Prelogar, the U.S. solicitor general who argued for the United States on behalf of the Mississippi clinic, Justice Barrett asked about “safe haven” laws that permit women to drop off their unwanted newborn babies at police stations or fire houses; the mothers’ parental rights are then terminated without further legal consequences. If the problem with “forced motherhood” was that it would “hinder women’s access to the workplace and to equal opportunities,” Justice Barrett asked, “why don’t safe haven laws take care of that problem?”

She continued: “It seems to me that it focuses the burden much more narrowly. There is, without question, an infringement on bodily autonomy, you know, which we have in other contexts, like vaccines. However, it doesn’t seem to me to follow that pregnancy and then parenthood are all part of the same burden.”

I’ll pass over the startling notion that being required to accept a vaccine is equivalent to being forced to carry a pregnancy to term. “Gaslighting” doesn’t adequately describe the essence of what Justice Barrett was suggesting: that the right to abortion really isn’t necessary because any woman who doesn’t want to be a mother can just hand her full-term baby over to the nearest police officer and be done with the whole business. As Justice Barrett, of all people, surely understands, such a woman will forever be exactly what she didn’t want to be: a mother, albeit one stripped of her ability to make a different choice.

*There are signs of big trouble brewing in Ukraine, though I hope this is just a threat. 90,000 Russian troops have massed on the Russia/Ukraine border, leading the West to worry that, as they did before, Russia has designs on the country (they took Crimea in the last invasion). Russia has taken pre-combat actions, like putting cages on tank tops to deflect antitank missiles (below). The Russians have also escalated their rhetoric.

The stark warning by the US secretary of state, Antony Blinken, on Wednesday that Russia has made plans for a “large-scale” attack is backed up by open source analysis – and western intelligence assessments. “There is enough substance to this,” one insider added.

President Joe Biden is said to have been concerned for weeks, but efforts to cool the temperature – including Thursday’s summit between Blinken and his counterpart, Sergey Lavrov – have failed, suggesting Russia wants the crisis to continue.

. . . It is easy to argue that recent developments are designed by Russia to test the west and the US’s resolve, particularly as a new left-leaning German government is poised to take over. However, western diplomats emphasise that Ukraine is not a member of Nato and that therefore there is no obligation to defend the country if attacked.

This means that Russia has carte blanche to invade (nobody has the stomach for a war with Russia), and the only response would be words and sanctions.

The Russians look as if they’re preparing for battle: 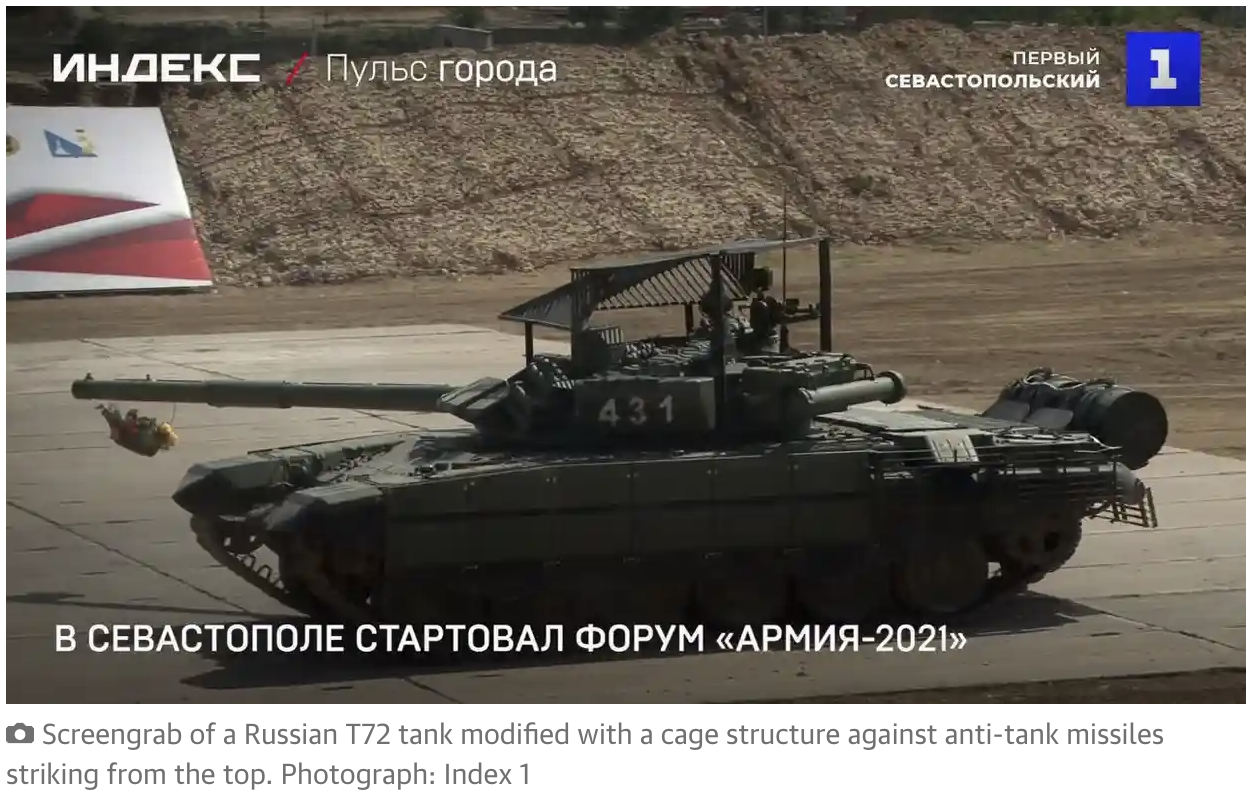 *The NYT’s “Ethicist” takes up the question of whether religious exemptions from Covid vaccines can be justified. (I have previously said “no” because they compromise the health of society.) I disagree with his first paragraph below, but agree in general that exemptions should not be granted without good reason:

It matters, too, whether religious claims against the state or an employer are backed by a community of faith. (No major religious group has asked members to abstain from vaccination, though individual congregations may go their own way.) That’s relevant in two respects. First, we have some reason to try to accommodate a community of faith precisely because it is a community; and second, such membership increases our confidence that the profession is sincere. When conscientious objectors are asked to establish their bona fides, the fact that they belong to a tradition with pacifist commitments — such as Quakerism — may be taken as a useful proxy.

Our assessments of faith-based claims will be imperfect, no doubt. But allowing people to assert a religious exemption with no questions asked is an obvious invitation to abuse. Some people seem to think that merely uttering the words “religious exemption” obliges us to let them do whatever they want. That way chaos lies.

Nope, I don’t care whether there is a community of, say, Christians whose faith mandates no vaccinations. Their status as unvaccinated puts the rest of us at risk. And I don’t care about their sincerity; sincerity puts us at just as much risk as lying since both results in unvaccinated people. The only excuse for exemption, in my view, is preexisting medical conditions that make immunization dangerous. Period.

*Doesn’t the NYT have better things to do that kvetch about how cute cats are used to push right-wing dogma? I guess not, so you can read “Those cute cats online? They can help spread misinformation,” by technology reporter Davey Alba (h/t j. j.)

The posts with the animals do not directly spread false information. But they can draw a huge audience that can be redirected to a publication or site spreading false information about election fraud, unproven coronavirus cures and other baseless conspiracy theories entirely unrelated to the videos. Sometimes, following a feed of cute animals on Facebook unknowingly signs users up as subscribers to misleading posts from the same publisher.

. . . The website of Dr. Joseph Mercola, an osteopathic physician who researchers say is a chief spreader of coronavirus misinformation online, regularly posts about cute animals that generate tens or even hundreds of thousands of interactions on Facebook. The stories include “Kitten and Chick Nap So Sweetly Together” and “Why Orange Cats May Be Different From Other Cats,” written by Dr. Karen Becker, a veterinarian.

Oh for chrissake. Here’s a helpful picture that accompanies the article (the red line is from the NYT): 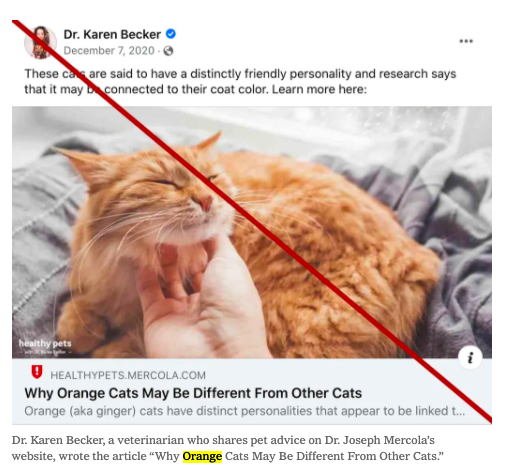 *Gravelinspector sent a “Scotland picture of the week” from the BBC: a quizzical mallard 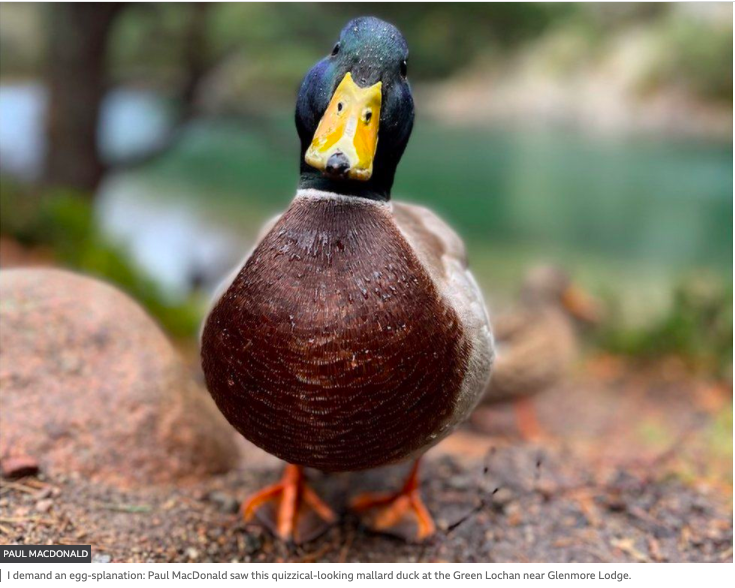 Stuff that happened on December 3 includes:

This was a mess, but you know who won. Jefferson took the victory on the 36th ballot.

A great musical, though I heard the late Stephen Sondheim diss it as as one of those “mindless musicals with memorable tunes” in an old NPR interview yesterday. Sondheim said he preferred to write other kinds of musicals that conveyed emotionality.  That’s the first time I heard him wax arrogant.

Voilà: from the original cast of Camelot: “I loved you once in silence” with Julie Andrews playing Guinevere, talking about the illicit love between her and Lancelot (Robert Goulet).

Stuart’s most famous work is this unfinished painting of George Washington, painted from life in 1796. This is the George you’ll see mirror-imaged on the American one-dollar bill. 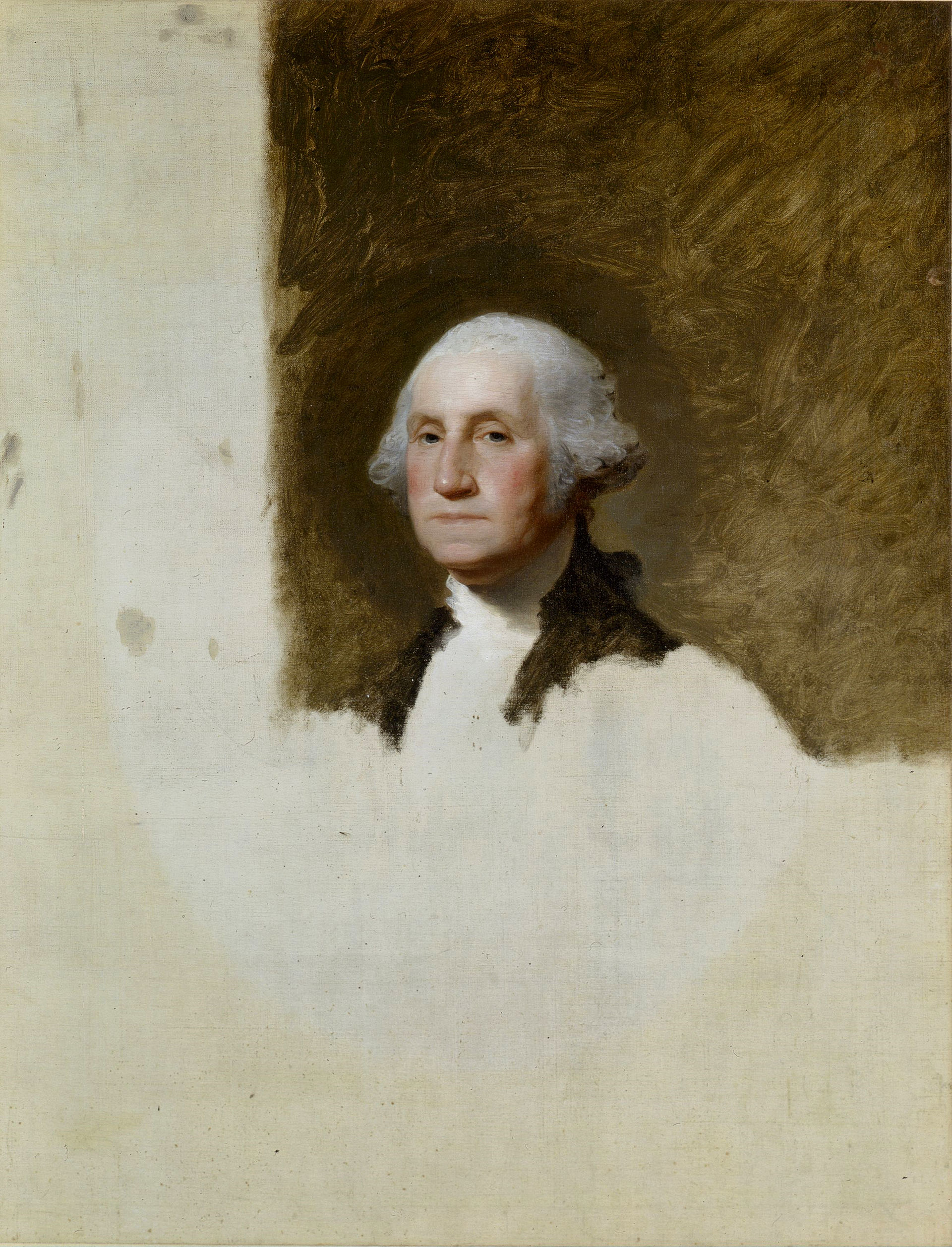 Finlay discovered that a mosquito of the genus Aedes was the vector of yellow fever, and that led to the conquest of the disease, which in turn allowed the Panama Canal to be built with not too much mortality.

Conrad’s native language was Polish but his famous works are in English—and what fantastic English he wrote! Photo below, ca. 1919:

She was Freud’s sixth child and herself became a psychoanalyst. Here she is with dad in 1913: 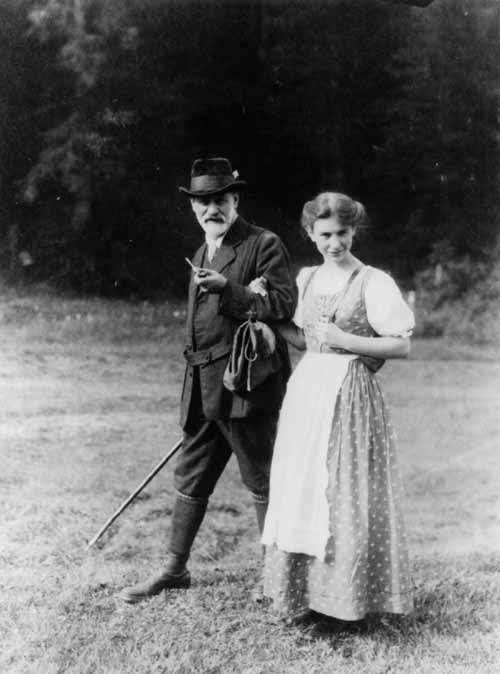 Wikipedia notes, “Moore is an atheist; when asked on Inside the Actors Studio what God might say to her upon arrival in heaven, she gave God’s response as, “Well, I guess you were wrong, I do exist.” 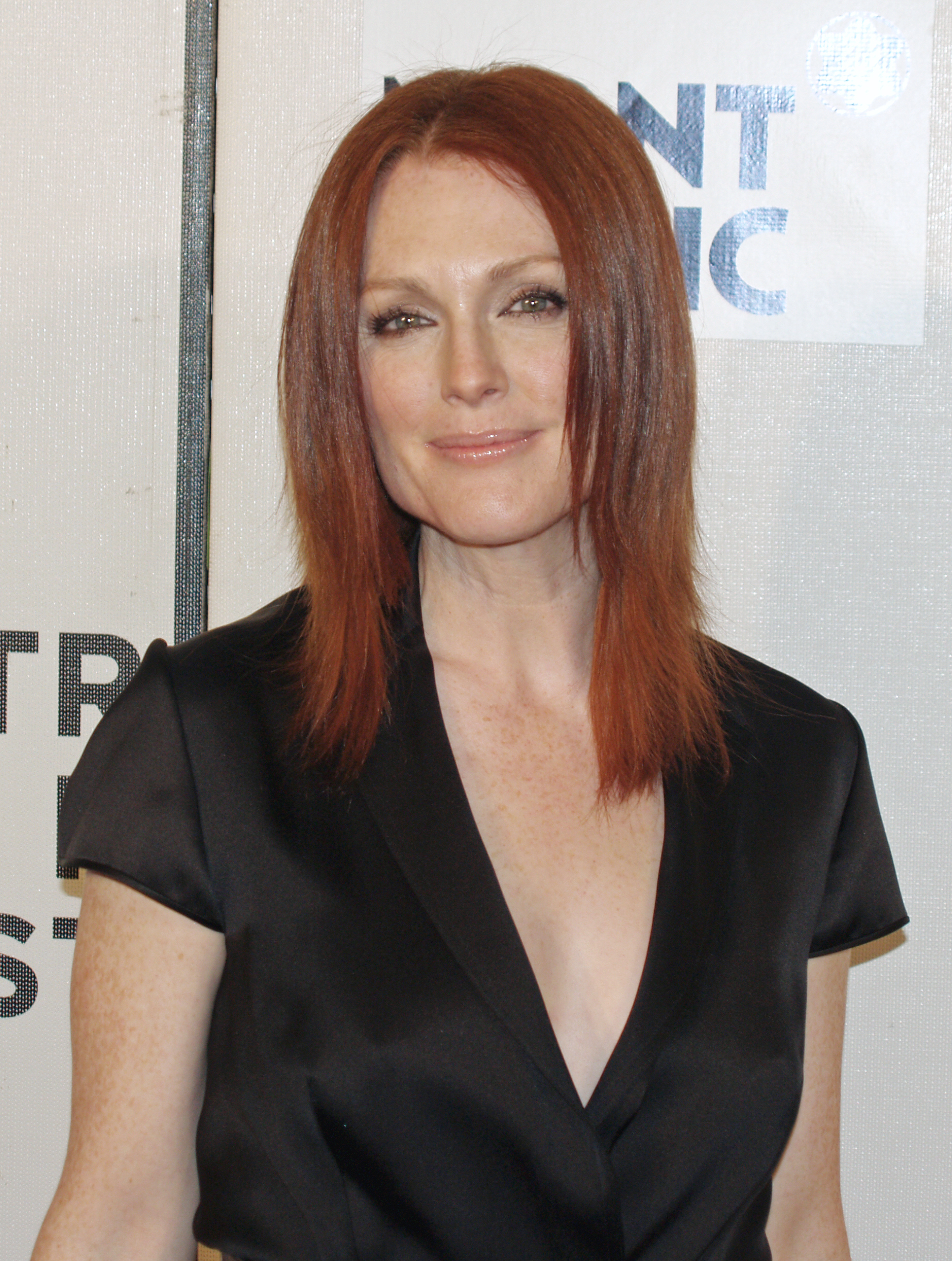 She was in a vegetative state for 15 years before the courts finally allowed her feeding tube to be removed.

Here’s Witt in the long program in the 1988 Calgary Olympics. She finished second in this program, ultimately nabbing the gold medal for East Germany:

Those who no longer needed to floss on December 3 include:

Stevenson died at 44 on Samoa. Here he is with his family on that island about 1892:

Meanwhile in Dobrzyn, Hili is sleeping in the firewood basket, and of course has to kvetch:

A: Hili:, this basket is dirty.
Hili: And it’s your fault. 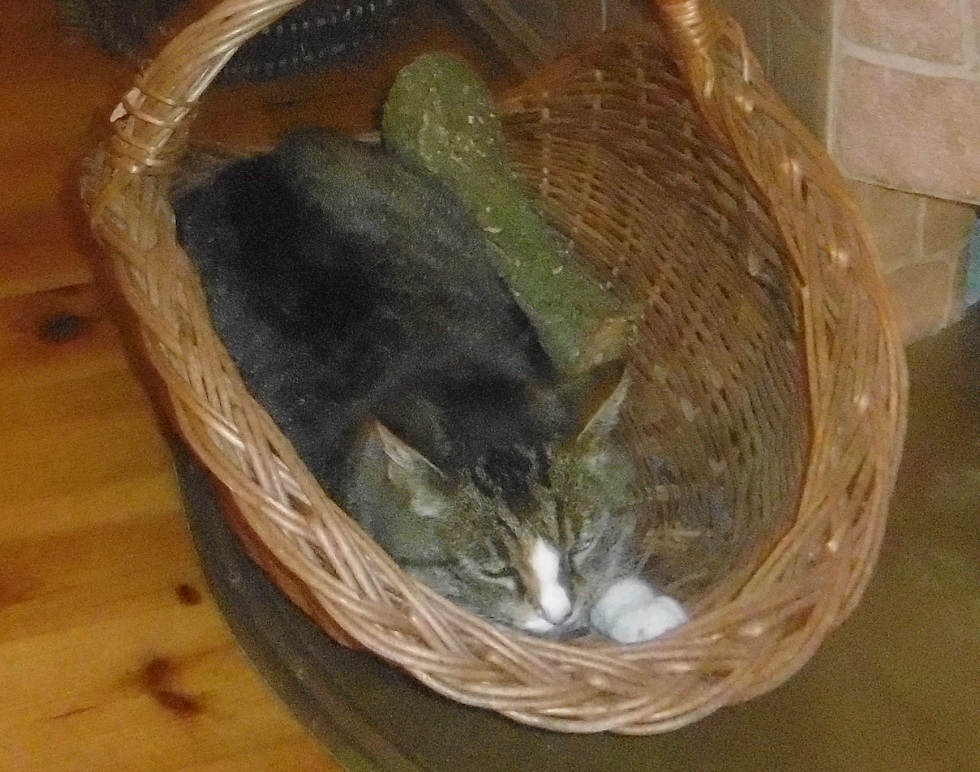 And a photo of Kulka by Andrzej: 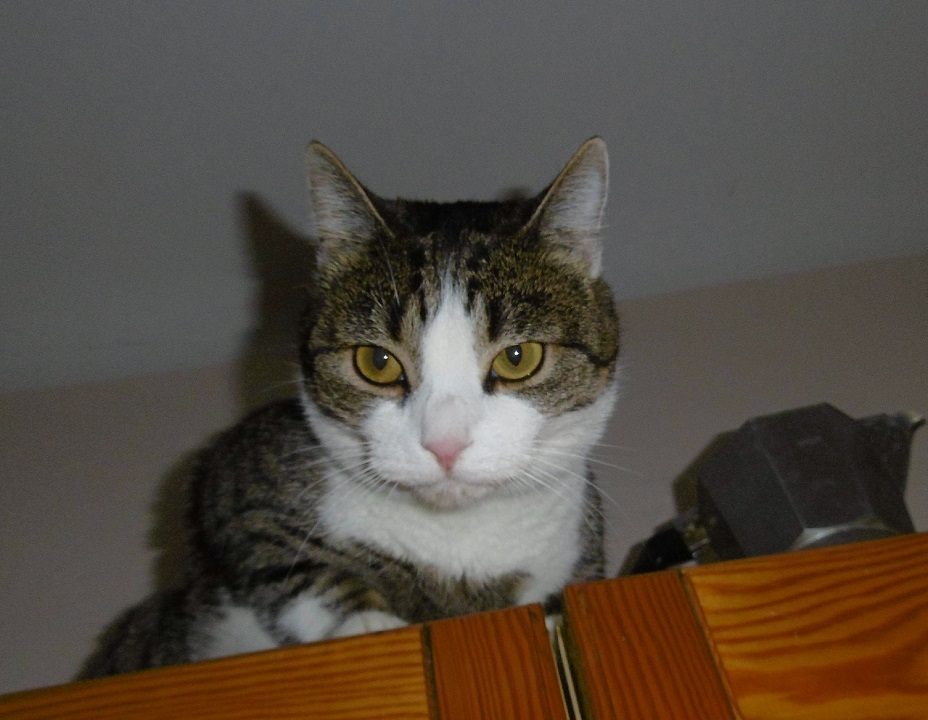 From Marie, a duck greeting card. Awesome! I ordered ten. 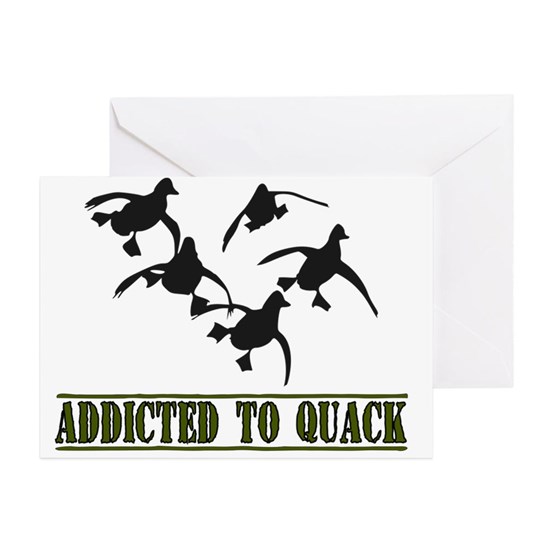 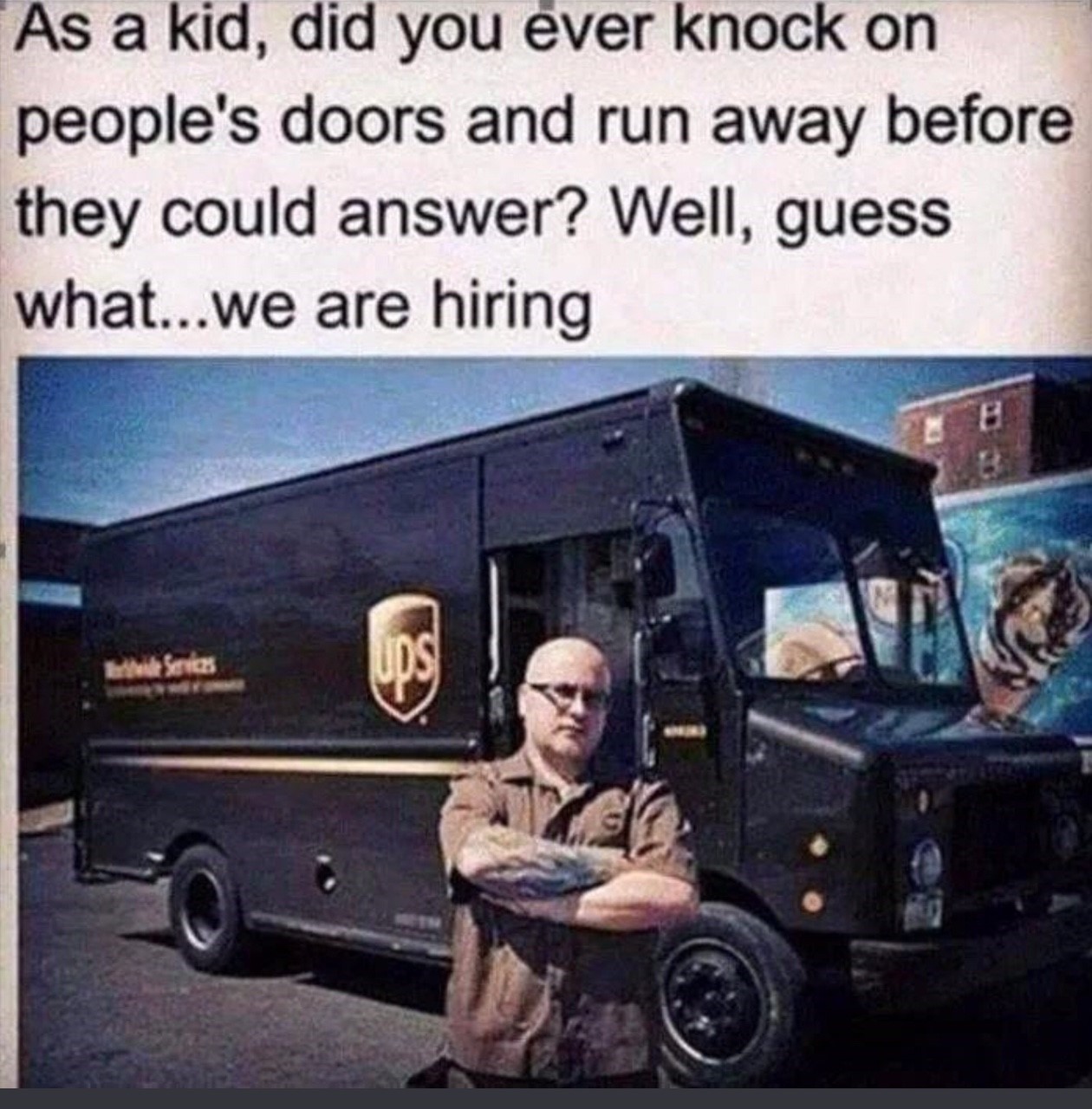 Foxes and Fossils are releasing one Chrismas song each week for the next four weeks. Here’s the first, with Sammi singing:

A tweet from God. I don’t think this plan will fly, but, you know, he is omnipotent.

Thinking about changing the sabbath to Wednesday

From the Auschwitz Memorial, one of many displays in the Museum (including huge collections of dolls, shaving brushes, and an entire roomful of human hair shaved from women about to be gassed. It was used to fill mattresses. Here’s a display of the cans of cyanide granules used to gas the “selected”:

Auschwitz I. Block 4. Zyklon B canisters.

Its application produced so-called internal asphyxiation of the victims by blocking the exchange of oxygen in the red corpuscles and impeding cellular respiration.

Tweets from Matthew. I wonder if telescopes could show you something older than this meteorite.

All the otherworldly deets: https://t.co/rT4O08iZBX

An excellent thread. Did the Omicron variant come from another species?

As someone who is very interested in experimentally infecting wild-type mice with SARS-CoV-2 to study host responses, I’ve treated Bob Garry’s gorgeous figure like a variant roadmap to experiment planning. He’s updated it to include omicron. pic.twitter.com/amKr9LVYAQ

Good morning to everyone except for the NHS pregnancy app which just ruined my day. pic.twitter.com/lieSOsoMjD

They should do this with ducks:

I don't know why we have three different pig emojis but it's great for when you need to tell someone a pig is slowly approaching:
🐖