If you think that Iran, under its present theocracy, is willing to halt the production of nuclear warheads and missiles, then you are deluded. In fact, even Tom Friedman in the NYT is deluded in his column asserting that “Trump’s Iran policy has become a disaster for the U.S. and Israel.”  Why? Because, according to Friedman:

Up until Trump walked out of the Iran deal negotiated by President Barack Obama — even though international inspectors said Iran was still adhering to it — Iran’s breakout time to produce enough fissile material for a nuclear weapon was one year, and Iran had agreed to maintain that buffer for 15 years. Now it’s a matter of weeks. It would still take Iran a year and half or two years to manufacture a deliverable warhead, U.S. officials believe. But that is cold comfort.

Yes, of course Iran has promised to slow down its production of nuclear material for warheads, but has it really done that? What about those UN inspections?

They are a joke. The agreement forged by Obama stipulates that inspectors are forbidden to inspect military sites. Well, where do you think production of Iran’s warheads and missiles is taking place? And when you read about how the inspections are conducted: very lax, with required advance warning (this should not be given) and soil samples provided by Iran, you wonder how the inspectors can be duped so easily.

And don’t forget that according to the so called “sunset clause” in Obama’s deal, after 2035 Iran would have been absolutely free to develop whatever bomb it wants. 2035 is not as far away as we imagine. But of course Iran has no intention of waiting even that long.

The aims of Iran have been declared explicitly. Here’s one from the spokesperson for Iran’s armed forces (click on screenshot): 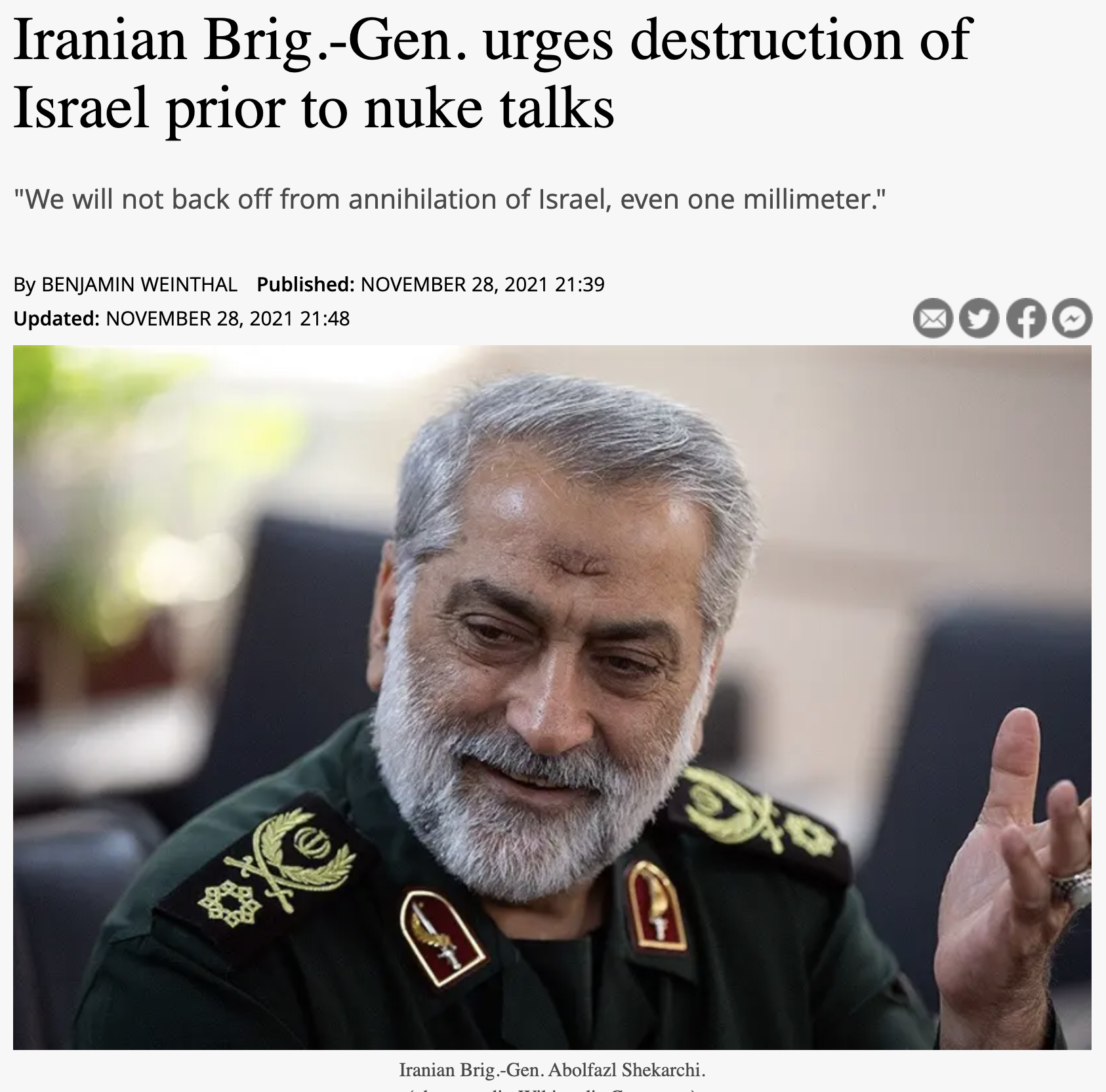 The spokesman for the Islamic Republic of Iran’s armed forces, Brig.-Gen. Abolfazl Shekarchi, on Saturday urged the total elimination of the Jewish state during an interview with an Iranian regime-controlled media outlet.
“We will not back off from the annihilation of Israel, even one millimeter. We want to destroy Zionism in the world,” Shekarchi told the Iranian Students News Agency.
Shekarchi’s genocidal antisemitic remarks come just days before the nuclear talks are set to restart in Vienna Monday on curbing the Islamic Republic of Iran’s illicit nuclear program. The United States and other world powers are seeking to provide Tehran with economic sanctions relief in exchange for temporary restrictions on its atomic program. Israel and other countries believe Iran’s regime seeks to build a nuclear weapons device.

The Iranian general also blasted Bahrain and the United Arab Emirates for normalizing diplomatic relations with Israel, terming the diplomacy “intolerable” for Iran’s clerical regime. “Saudi Arabia, Bahrain, UAE and other countries considered as Muslims, for us they part of the Zionist regime and this is very important,” said Shekarchi. 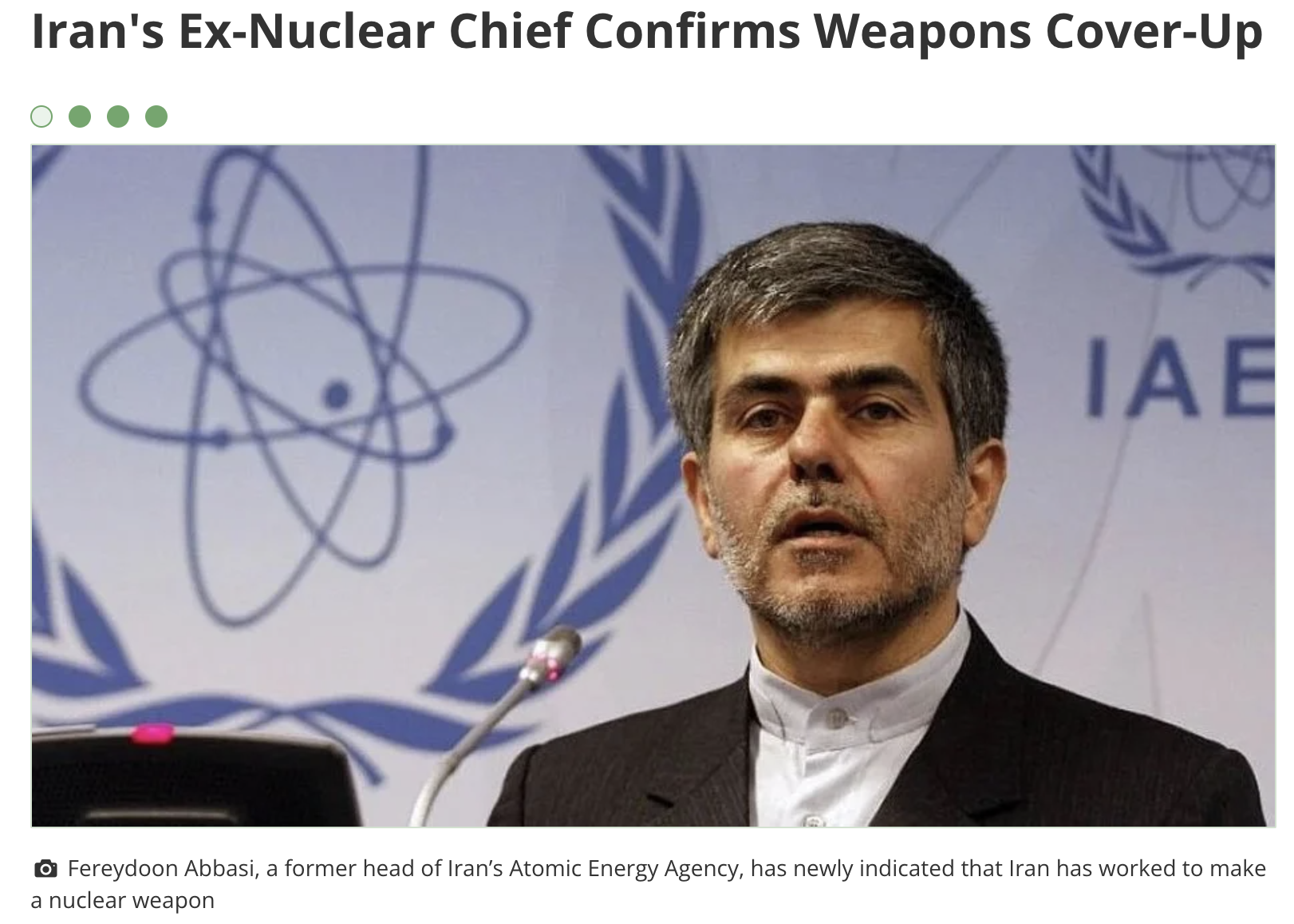 Anybody with a lick of sense knows that the theocracy and its mullahs have an overweening aim: to destroy “Zionism,” by which they mean Israel.  And if you think that Iran will agree to stop cold in its production of fissile material, warheads, and missiles, I would question your credulity. Perhaps Trump had speeded up that process a bit when he withdrew from the nuclear agreement, but I think the withdrawal might have been justified. It reduced the contributions of the mullahs to terrorist organizations like Hezbollah and Hamas, and the economic pressure made the Iranian public even more dissatisifed with the mullahs. That’s why Iran is so desperate to get back to the negotiating table and get the sanctions lifted, as well as trying to exact a patronizing promise from the U.S. and EU that they will never again impose sanctions. Read about the demonstrations against the government of Iran, in which soldiers just shoot the demonstrators.

And insofar as Biden and the EU renegotiate a deal with Iran in which it promises to slow down (but not stop) production of nuclear weapons, they are also dupes. Everyone knows that the production of those weapons is inevitable. At best we can buy some time, but not very much.

So what can be done? Israel can be destroyed by one or two nuclear missiles fired from Iran, and there will be no warning and little possibility of retaliating against such a large country.

Israel has two choices, neither of them palatable. It can bomb Iran’s nuclear facilities, but that is very likely to start a war—a war that nobody wants, including Israel itself, the U.S. and the EU. Or Israel can do nothing, or do smaller acts of sabotage like assassinating Iranian nuclear experts, which it has done. That will have little effect, and eventually Iran will aim its missiles at Israel.

The only viable solution I can see is the overthrow of the Iranian theocracy and institution of a secular government in there. We cannot do that, of course: it is up to the Iranian people. But those people are getting increasingly fed up with the theocracy and the economic degeneration of the country. And many are sick of the constant intrusion of fundamentalist Islam into their lives. You may have read about anti-regime demonstrations all over Iran, especially in Isfahan. Read Masih Alinejad’s Twitter feed for daily documentation. Persistent sanctions, with U.S. support of the demonstrators and denunciation of Iran’s human-rights violations (something the Iranians also want to negotiate away), will hearten them.

Alternatively, we can just let Iran develop its armed missiles and accept it into the community of the Nuclear Abled along with the U.S., UK, Russia, and China (with North Korea on the way). But Iran is not like North Korea, and I have no confidence that they won’t use their missiles. Israel is not the EU or the US, and has limited power to defend itself against a nuclear attack.

We can’t get rid of the mullahs, but the only way forward is to keep up with the sanctions to leverage a change of regime.  In this sense I have to say that Trump’s actions made more sense than Obama’s and now Biden’s (Need I say that I despise Trump and am elated that he’s gone? But I cannot claim that every single thing his administration did was injurious. The revision of Title IX under DeVos was another example.)

Iranians don’t need empty words. If you are deeply concerned about those protester who got killed, then don’t bury human rights under nuclear deal.@StateDeptSpox https://t.co/TSzNurhEKa

54 thoughts on “Iran will build a bomb no matter what”