Every evening or so in the ads on NBC News, I have to watch television star Mayim Bialik tout her “brain supplements”, which she claims she invented. They are of course untested nostrums (see below), but the icing on the cake is Bialik’s claim that she’s “a real neuroscientist.” (She does have a Ph.D. in neuroscience, and plays one on the t.v. show “The Big Bang Theory,” but that’s as far as it goes.)

Here are two of her commercials for Neuriva. Nothing she says in the first commercial about Neuriva is true, and she adds that she’s a genuine scientist, saying, “I really am; ask your phone.” Well, I asked my computer, and no dice.

Below is the short commercial I usually see, in which she advertises her snake oil and boasts, “I’m an actual neuroscientist.” She also says she “loves the science behind Neuriva Plus.”  Both the value of the product and her claim to be an actual scientist are dubious. As Harriet Hall notes below, there is no science behind Neuriva.

Over at Science-Based Medicine, Harriet Hall went after Bialik’s claims (both of them) and found them wanting. Neuriva’s efficacy is untested and doubtful, and as for the “actual neuroscientist” part, well, see below, as I did my own investigation.

I hope Dr. Hall won’t mind if I reproduce her entire short piece:

I wrote about the brain supplement Neuriva over a year ago. I thought their claim to have proof from clinical studies was misleading. I won’t repeat here what I said there about the evidence: I urge you to click on the link and read what I wrote.

An article in Psychology Today reviewed the evidence and called it “Neuriva nonsense” and “just another snake oil.”

Now they are selling Neuriva Plus, which combines the ingredients in the original Neuriva with vitamins B6, B12, and folate. Do they have any evidence that adding these vitamins enhances the effectiveness of Neuriva? Of course not! Neither Neuriva nor Neuriva Plus has been clinically tested. They are relying on studies of individual ingredients, and those studies are questionable. The results have been mixed, and one study was in aged mice!

Now Mayim Bialik has embarked on a campaign as Neuriva’s science ambassador. You may have seen her commercials on TV where she says she “loves the science of Neuriva” and claims it supports six key indicators of brain health. You may remember her as Amy Farrah Fowler, Sheldon’s girlfriend in “The Big Bang” t.v. series.

Elsewhere she has said:

Neuriva Plus is backed by strong science — yes, I checked it myself — and it combines two clinically tested ingredients that help support six key indicators of brain health.

She holds a PhD in neuroscience, but I couldn’t find whether she ever actually worked as a neuroscientist. It’s obvious that her understanding of “strong science” doesn’t mean what she thinks it means. I doubt if she reads Science-Based Medicine or understands the principles we go by.

Conclusion: Bialik is a good actress.

Does Neuriva Plus support brain health? Maybe. We have no way of knowing for sure until the product itself is clinically tested.

To check how “actual” Bialik’s claims to be a scientist are, I searched the Web of Science under the names Bialik M and Bialik MC to see if she had any publications (this is the way we find out someone’s record). As the screenshot below shows, she has zero publications. She is neither teaching in a university, working in a lab, or, as far as I can see, actually doing any science. (BTW, I no longer say “I’m a biologist” when someone asks me what I do. I say that I’m a “former biologist”, “superannuated biologist” or “retired biologist.”) The circling is mine: 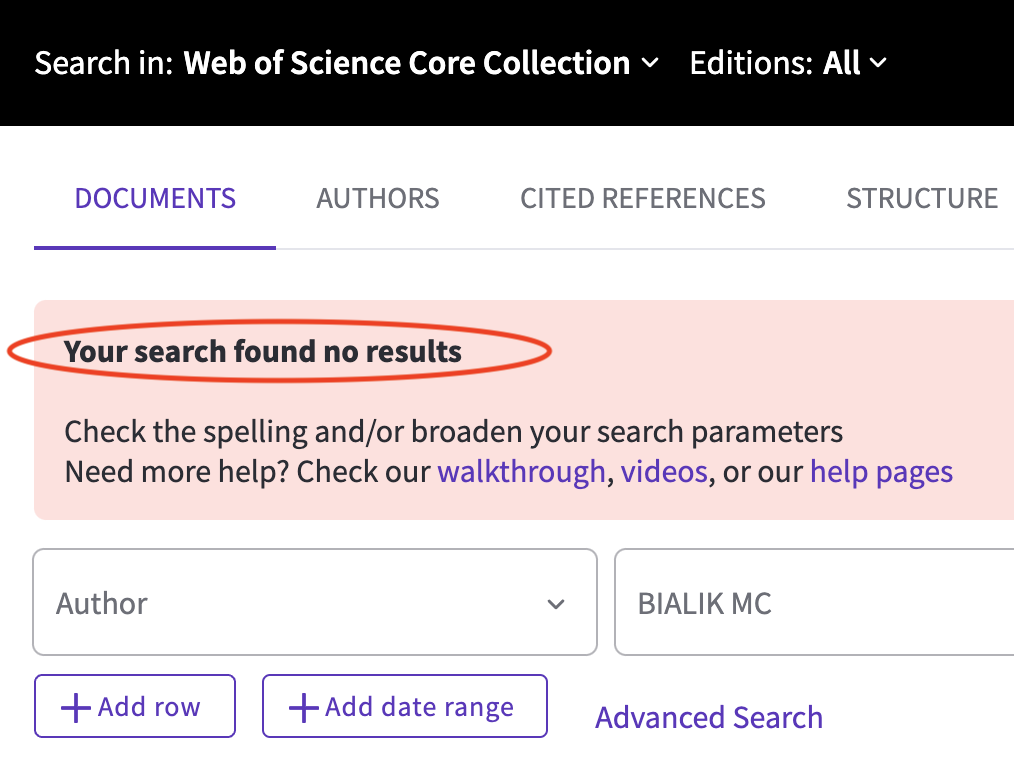 Now Wikipedia does report on her training:

She returned to earn her Doctor of Philosophy degree in neuroscience from UCLA in 2007 under Dr. James McCracken.[25] Her dissertation was titled “Hypothalamic regulation in relation to maladaptive, obsessive-compulsive, affiliative and satiety behaviors in Prader–Willi syndrome“.[2][26][27]

But if you look at references 2, 21, 26, and 27, you find no peer-reviewed publications except her Ph.D. thesis. She has written no books on neuroscience, either. She’s written or coauthored four books, but none about neuroscience:

Bialik has written two books with pediatrician Jay Gordon and two by herself. Beyond the Sling[57][58] is about attachment parenting, while Mayim’s Vegan Table contains over 100 of Bialik’s vegan recipes.[59][60] Her third book, Girling Up, is about the struggles of and ways in which girls grow up, showing the scientific ways in which their bodies change. Its successor, Boying Up (2018) analyzes the science, anatomy and mentality of growing up as a boy, and the physical and mental changes and challenges boys face while transitioning from adolescence to adulthood.

To me this doesn’t give her present status as a neuroscientist, and she’d stand no chance of being hired by a university as one.  But I don’t mind that nearly as much as her using those credentials to sell untested “brain supplements” to a credulous public. People are spending actual money on Neuriva, and much of that must be based on Bialik’s claimed credentials and her status as a television celebrity. In this sense she is the female equivalent of Deepak Chopra, who can claim, “I’m an actual doctor” while selling his useless “longevity supplements.”