Over the last year we’ve heard many calls to “Defund the Police”, which varied in intent from simply reforming the police and perhaps diverting money to ancillary law-enforcement operation (some of which sound good, like psychiatric social workers going along on domestic violence calls) to asking for a complete abolition of the police department and a replacement with. . . what? Vigilante neighborhood police enforcement? Somehow, despite the problems of police departments, I’ve never seen an adequate substitute.  And now the movement is largely dead, thanks to two factors: a rise in crime rates throughout the U.S., and especially a rise in homicides, as well as Joe Biden’s election under his promise that he’d increase police funding.

Combined with the calls for defunding is a complete demonization of the police, epitomized by the acronym “ACAB”, meaning “all cops are bastards”.  That is of course ridiculous. While everyone admits that some cops are racist, or authoritarian, or hateful, this is simply not true of the majority of them. My interactions with the police, whether I’ve called them or have been stopped for speeding, have been polite and formal, though of course I will be told that as a white person I don’t experience the full racism of the cops. So if you want to characterize “all” cops as bastards, be my guest, but I think you’re way off. But defund them? No way.

In fact, no city has voted to get rid of or defund its police departments, and the American public has consistently asked—and this includes black communities—for more policing.

Except at the University of Chicago.

While all the sensible people here are grateful for the University of Chicago Police force, which has 24 hour policing over a wide swath of the community (not just the University grounds), as well as full police powers and good communication with the Chicago City Police, the students, who take the “ACAB” attitude, want the University cops gone, banished, singing in the Choir Invisible.

Submitted for your approval: an editorial from the Chicago student newspaper’s editorial team calling for the abolition of our large campus police. Click on the screenshot to read: 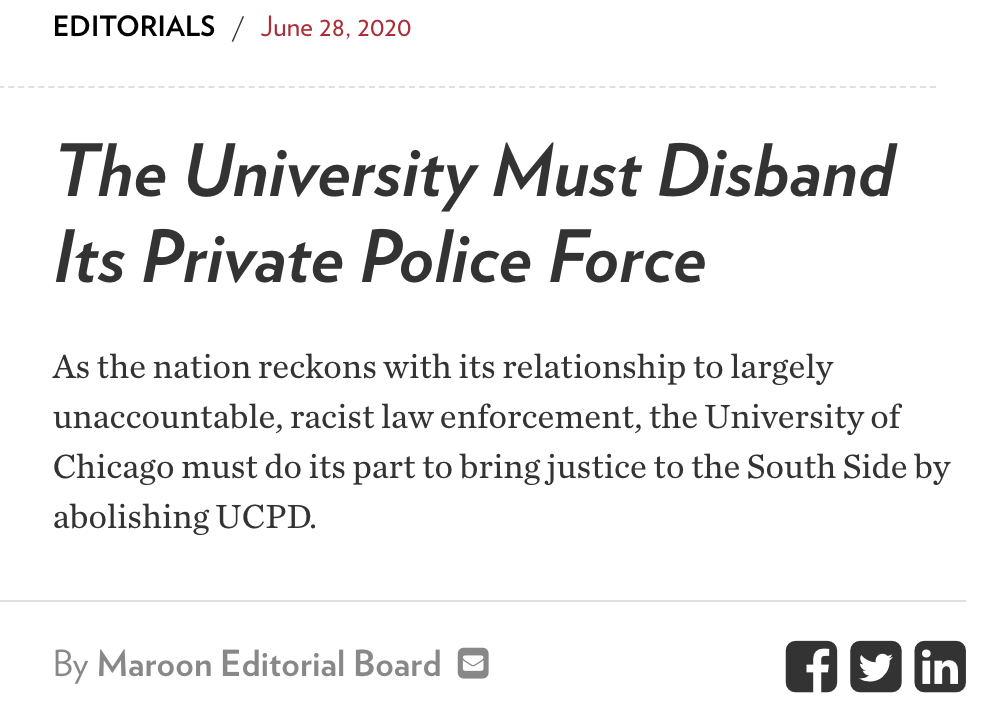 The University of Chicago should abolish the University of Chicago Police Department (UCPD) and replace it with an unarmed emergency response service better trained and equipped to handle particular, commonly occurring University-related situations. The UCPD has been, and continues to be, one of the main agents of the University of Chicago’s history of racial injustice on the South Side. Community members at UChicago and its surrounding neighborhoods have been aware of this for many years, and the University can take action on police brutality by disarming and disbanding the UCPD. Disbanding and replacing the University’s private police force would place the area currently patrolled by UCPD under the jurisdiction of the Chicago Police Department (CPD), and will not by itself solve the numerous problems endemic to the CPD. However, by disbanding the UCPD, the University can begin to make right its numerous historical wrongs perpetrated against South Siders.

As with many issues of social justice at UChicago, students have demanded better from administrators for years. #CareNotCops, a joint campaign run by Students Working Against Prisons and UC United, has been leading the charge to abolish UCPD, and organizers recently released a list of demands to defund and eventually disband the UCPD. In response to administrators’ refusal to engage with students and community members about policing, activists demanding a public meeting with Michelle Rasmussen and Kenton Rainey occupied UCPD headquarters for 20 hours on June 12. Organizers have been demanding substantial changes to UCPD for years, and we encourage students to get involved with these long running police abolition efforts—and administrators to break their habit of rebuffing students.

. . . By disarming and disbanding the UCPD, the University of Chicago can take an active stance against police violence and institutional racism, and work toward providing campus services that meet the specific needs of the University community.

The rationale hinges largely on racism: that most of police stops involve black suspects or people. But the ambit of the Chicago police force includes more black than white residents, and there’s the issue that the crime rate among blacks is higher than among whites, particularly on the South Side of Chicago (an area where blacks far outnumber whites—except in Hyde Park). Then there’s the issue of the cops shooting a mentally ill student experiencing a psychotic break when he charged the cops with a steel rod (he was shot in the shoulder). This was pure self-defense by the campus cops, but the students see it as racism (the student, Charles Thomas, is partly a person of color), and of police going willy nilly with violence.

So far the administration has held firm, refusing to “defund” or reduce the police force, leading to a student group occupying the police station (they left after they weren’t allowed to use the police bathrooms or order out for pizza), and camping in the street in front of the Provost’s house, painting rude slogans in Chinese in the street (our Provost is a woman of Asian descent).

Now the dilemma of the “defund the policers” has increased as three students have been killed via shooting in the last few weeks (see the links below), as well as an increase in other crimes in the area, like robbery and carjacking. Will the students now see the wisdom of increasing the police presence? Don’t bet on it. Even after three murders, the misguided #CareNotCops organization put out this Facebook notice for a rally: 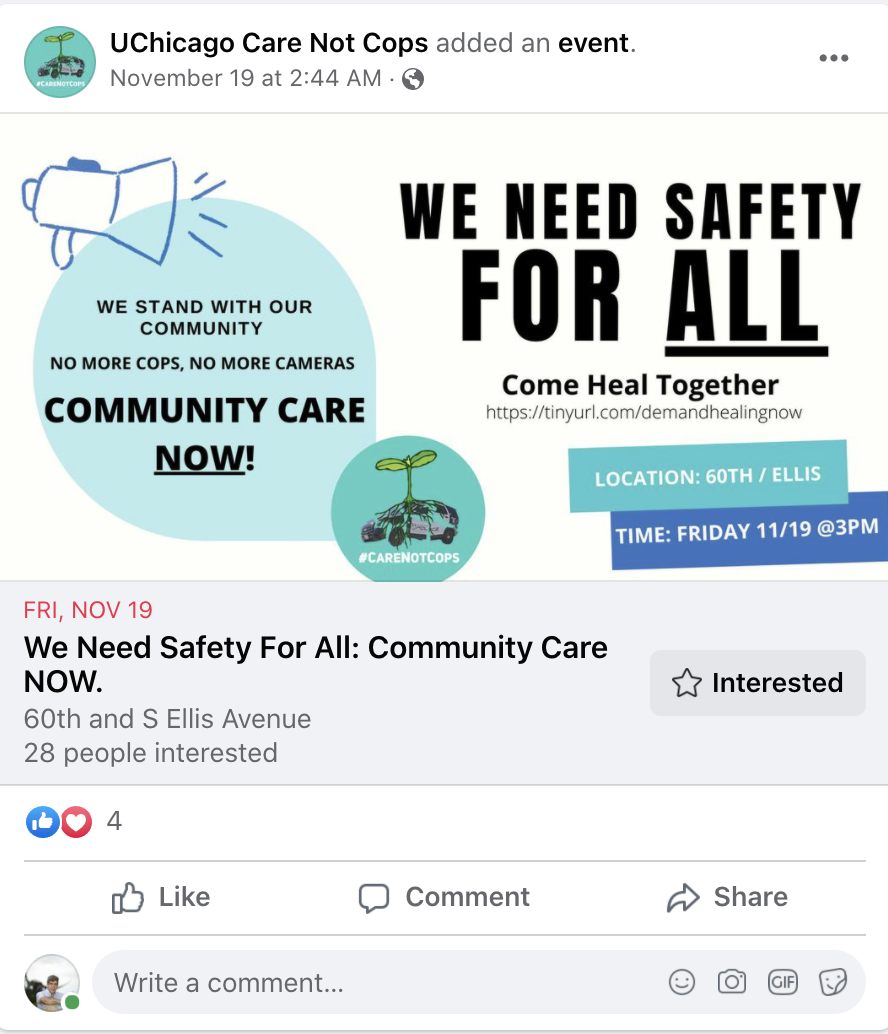 No more cops! No more cameras! In fact, the murderer of the latest dead student was caught with the help of the new cameras. Apparently, the group doesn’t want crime to decrease, nor do they want justice for crimes committed.

Read the “questions” the newspaper is asking about the shootings (click on screenshot below):

Now they’re beefing about the fact that the students got killed. Where were the cops? Why haven’t they done anything?

What countermeasures has the University taken to keep students safe after the first fatal shooting? The second? The third? Why have they in each case been insufficient at preventing additional student deaths?

It’s possible that the measures I’ve mentioned and other ones that the University has taken, such as increasing police presence, may well have prevented even more violence. So, I hesitate to say that the University’s responses have been totally ineffective. But, as this third fatal shooting has demonstrated, they have been insufficient.

Does this student think that police can completely eliminate crime here—or anywhere? That’s insane. But yes, the three shootings are a big concern, and are mirrored by the big increase in shooting deaths in Chicago this year compared to last, even in the ritzy downtown area.  But what I’d like to ask these students is this: “Where were you when you should have been defending rather than defunding the cops?”  Do you think violence will abate if we get rid of our campus police? How would that work?

There’s more in the article:

In the four quarters since January, three current or recent students—Yiran Fan, Max Solomon Lewis, and Shaoxiong Zheng—have been shot and killed. At this rate, before I graduate, eight more of my classmates will die.

Or I will die.

I no longer buy the “random acts of violence” argument. Students are clearly in imminent mortal danger—even in the daytime, even close to campus, even when we act safely.

What will the University do to protect us?

In fact, the University, in response to these incidents, is doing a lot more to protect not just people associated with the school, but with a residents of huge area north and south of the University. Five days ago our Provost and new President, after some public forums and Zoom discussions, issued an official University statement outlining changes in policing. Here’s what is going to happen (a quote from the report).

What is not going to happen is a reduction in the police budget or staff. In addition, in a University safety webinar with the President, the Chicago Police Superintendent, and the director of safety, the Superintendent announced that they’re putting 26 new beat cops in Area 2: the area around Hyde Park and the University.

Those who want the cops defunded become far less credible when crime shoots up. Their “demands” are not only ridiculous, but make the Left look ridiculous as well. If anything plays into the hands of the Republicans and Trump, it’s the claim that the Left, including woke students, are soft on crime, and in fact want to get rid of cops.  If there was an actual reason to get rid of cops, then we could think about that. But right now, the defunders should simply zip it: there’s no justification for their demand and they are driving centrists toward the Right.

38 thoughts on “Among student calls to defund and abolish the U of C police, three students are murdered”