In 2014 I did a post showing “readers’ childhood plushies” (plush dolls or animals). We had many photos, but since the other day was National American Teddy Bear Day, I put out a call for readers to send me photos of their Teddies. Not all of these are Teddies, but most are, and the others are also cute (check out the completely unstuffed horse). Go to the first link to see other readers’ bears and dolls; the ones here are all new.

First, my own Teddy, familiar to readers as Toasty. I got him when he was born, so he’s a septuagenarian.  You can see that most of his fur is worn off, my mother had to replace the eyes several times, and his neck was sewn on when he was nearly decaptitated (he’s a “Frankenbear”).  He resides in my office 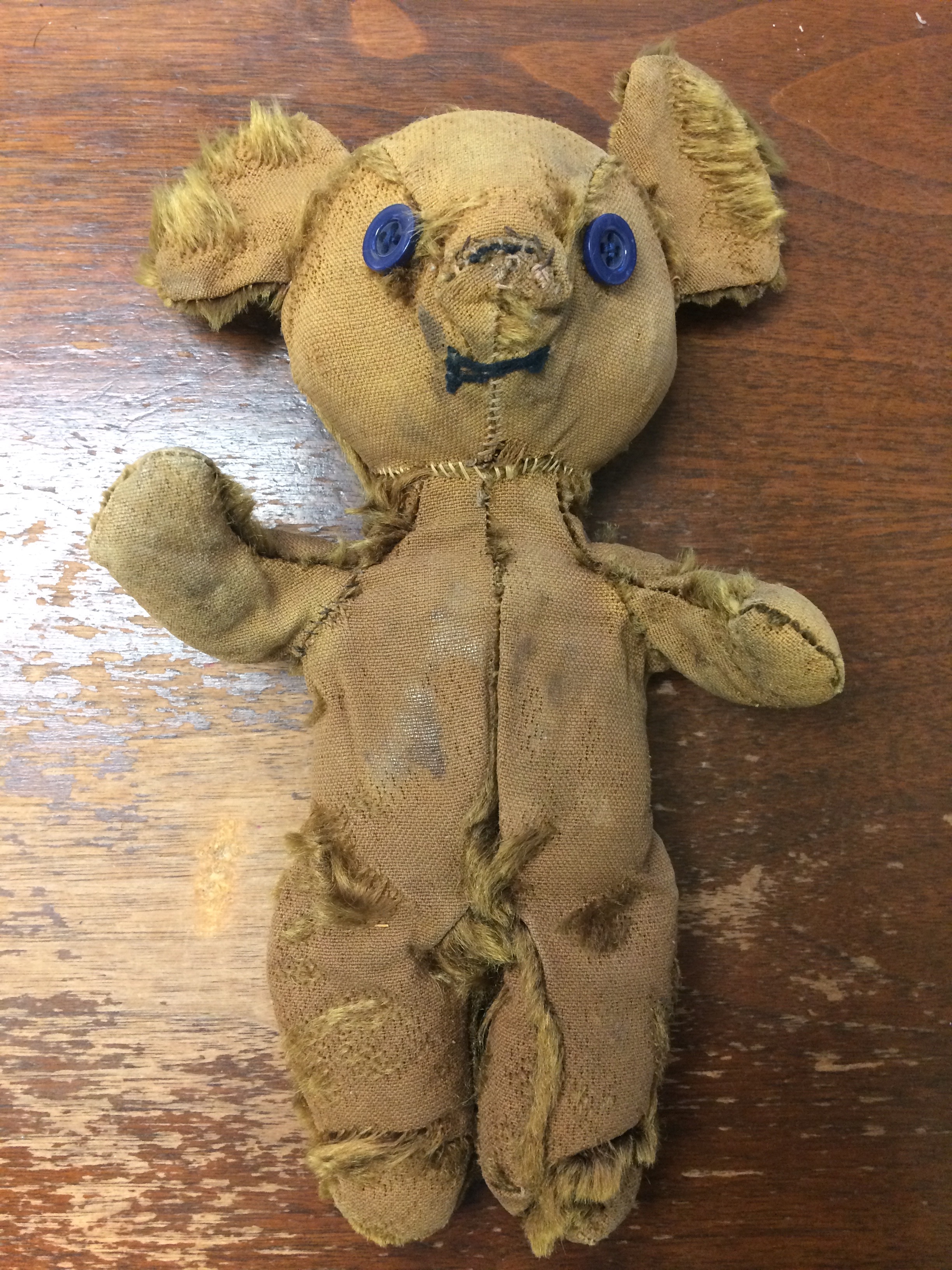 To cover his shame (even though he’s not anatomically “correct” my mother made him overalls. Here we are in my office in 2002: 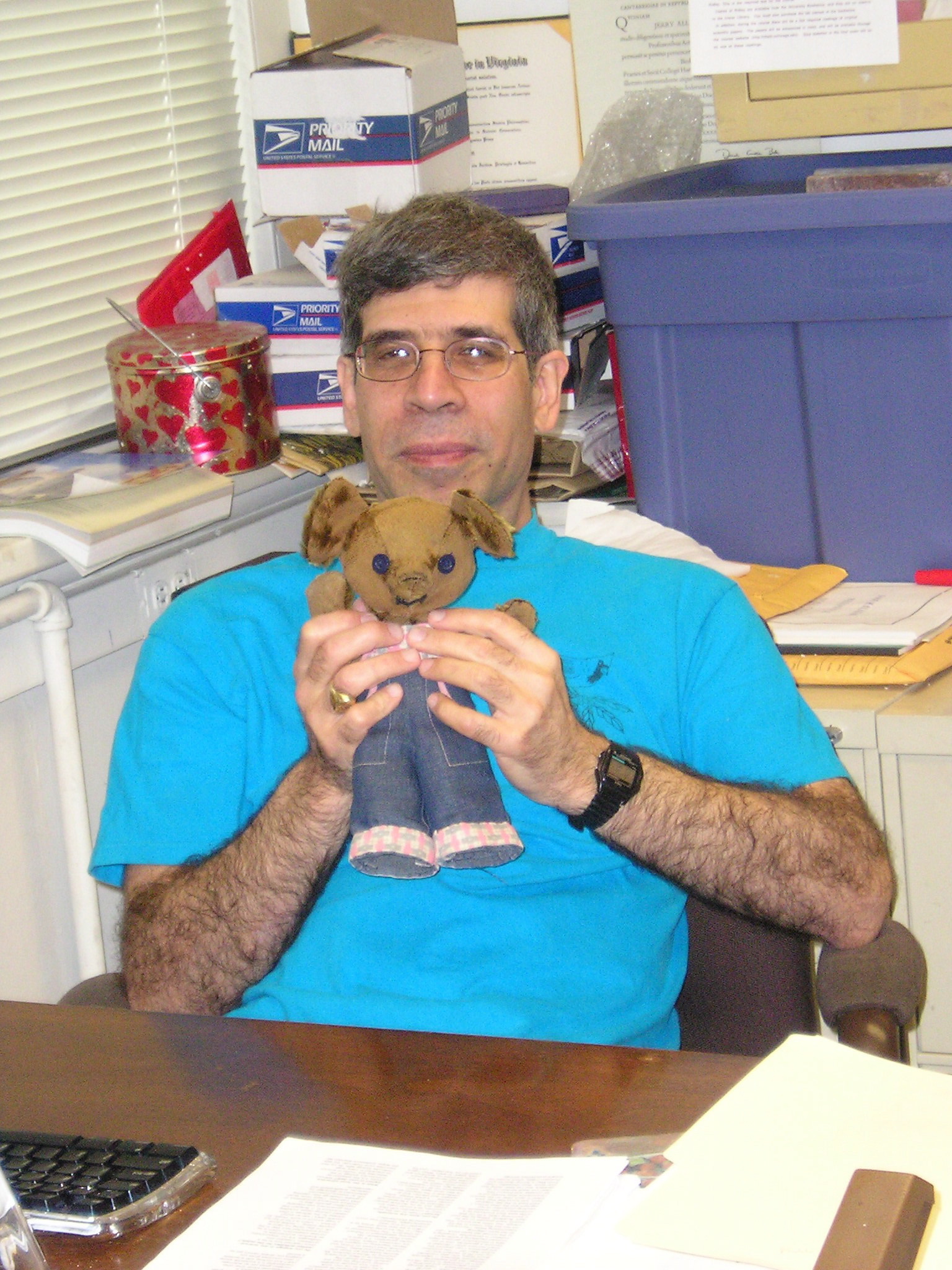 From Cynthia Baron Radtle, who wrote on Facebook,  “OMG! Toasty looks exactly like my Teddy.”  Well, Teddy looks a bit more beat up, but there’s definitely a resemblance. 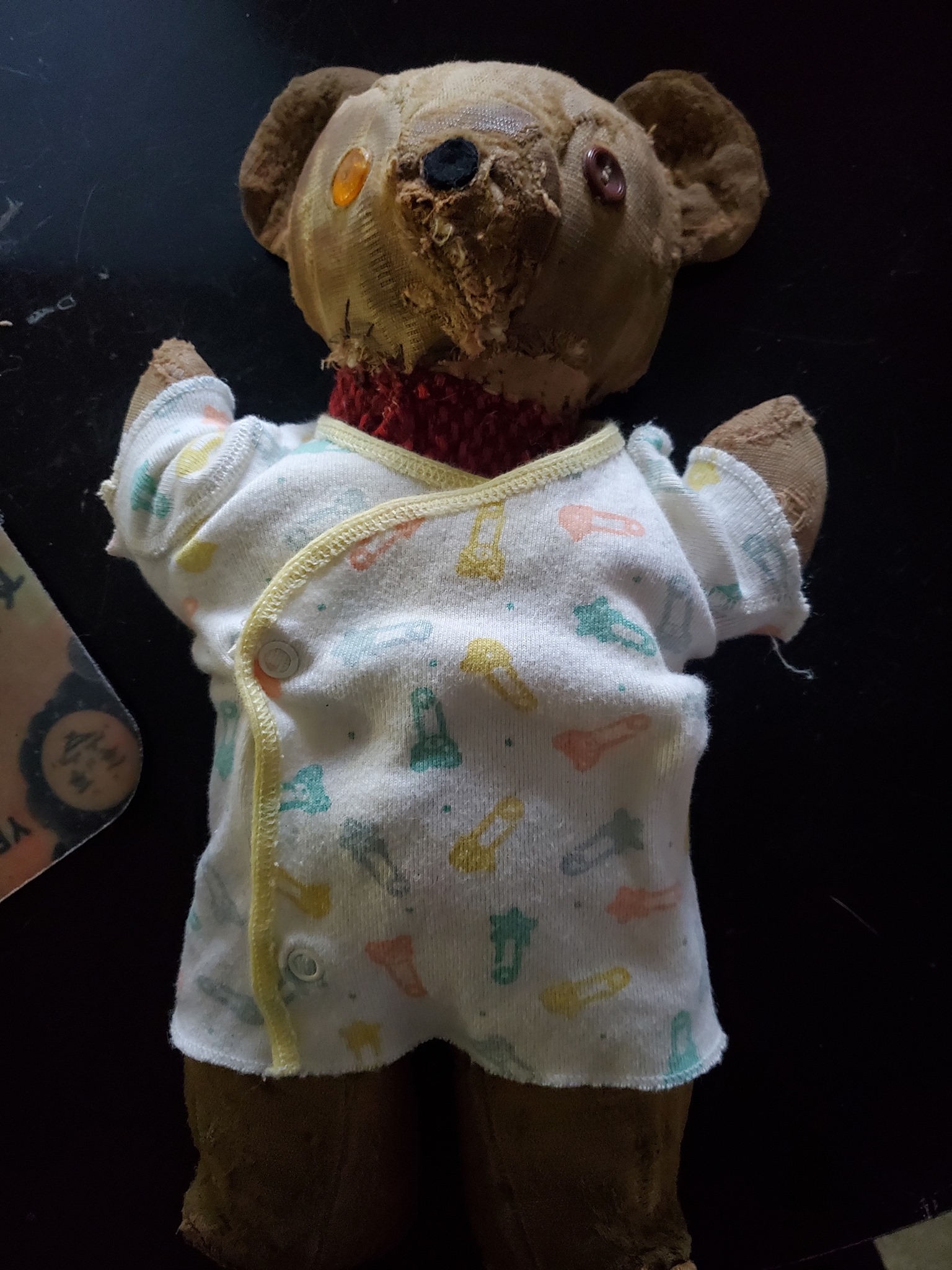 I will post a pic without the baby shirt. His body was so worn my mother had to sew a little body suit on him to keep the stuffing in. I’ve had him since infancy so I have no idea where I got him. Probably mom or dad. 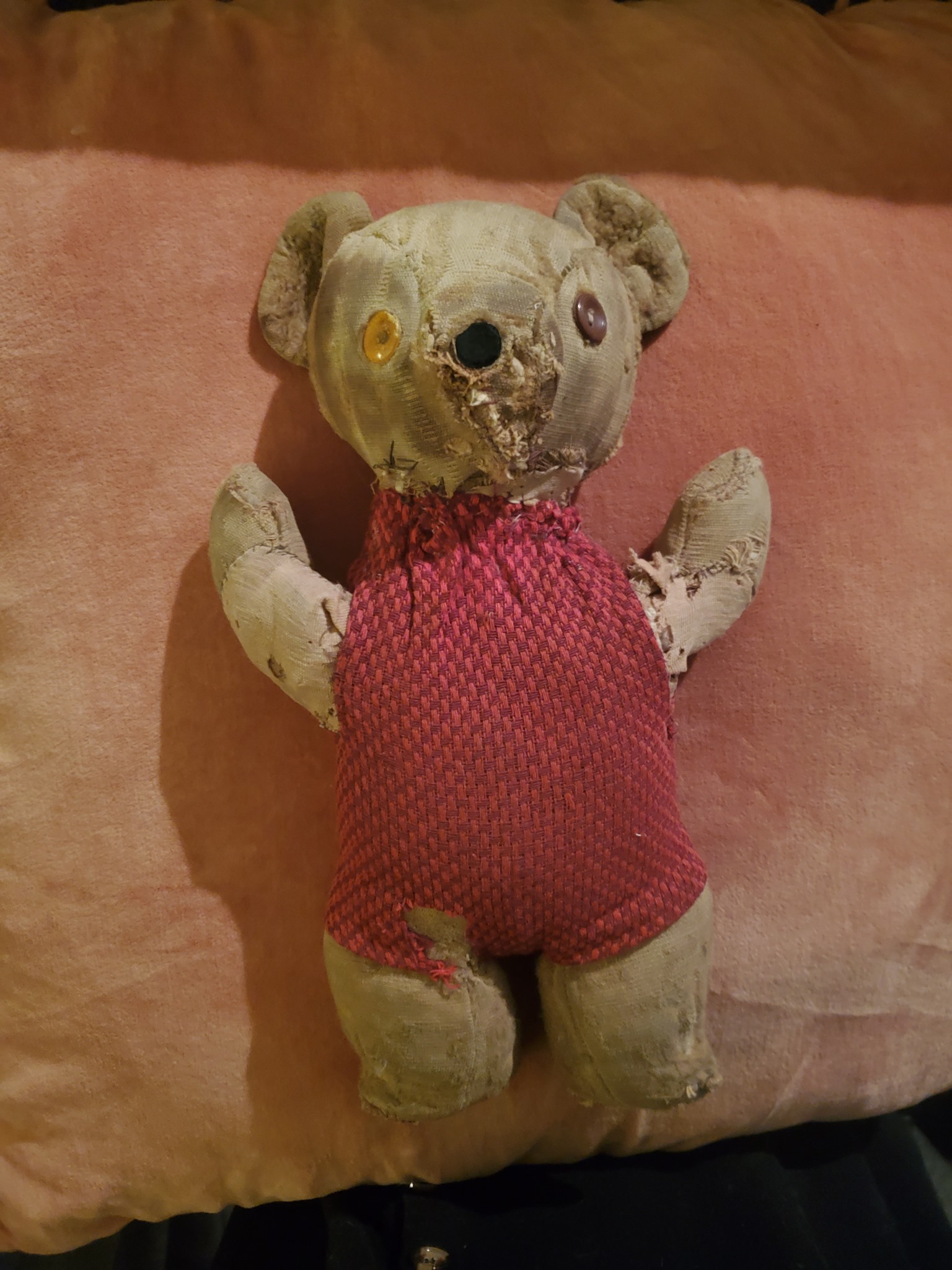 Leonard added this on Facebook (no photo): “My step-daughter, half our age, has a similar bear in similar condition. When she took it to UBC to do her post-grad, it attracted the nickname ‘roadkill’.”

When I showed my husband your Toasty, he insisted I send you a photo of his Ah Baby: 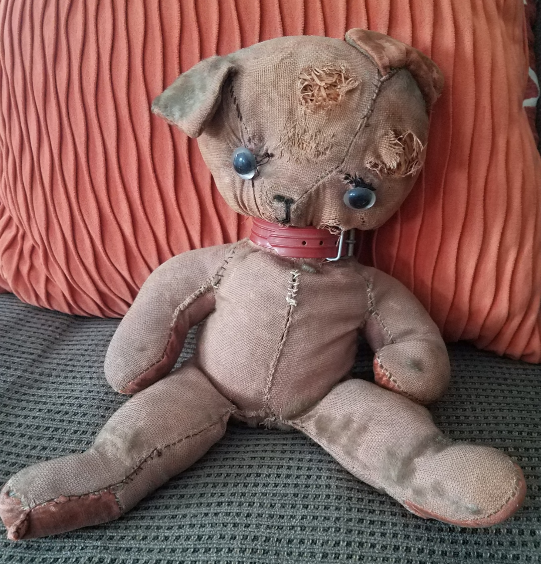 Ok he is a Scottie not a Teddy, but he is my oldest soft toy.

This is Wowser, and he is exactly the same age as me – 65 last weekend!  He was made for me from sheepskin by a friend of my mother who worked with her as a nurse.  He is mostly intact, but has lost a bit of fur, and has a bandage on his leg where the sheepskin went a bit brittle. Not at all bad, because he was also played with by my brothers and sisters, and was even passed down to a niece and nephew for a while before coming back to me.
Wowser now lives with quite a lot of younger teddies.  For about four years I had a registered business making and selling hand-made bears.  So here also is Manuel, who is one of my bear designs! 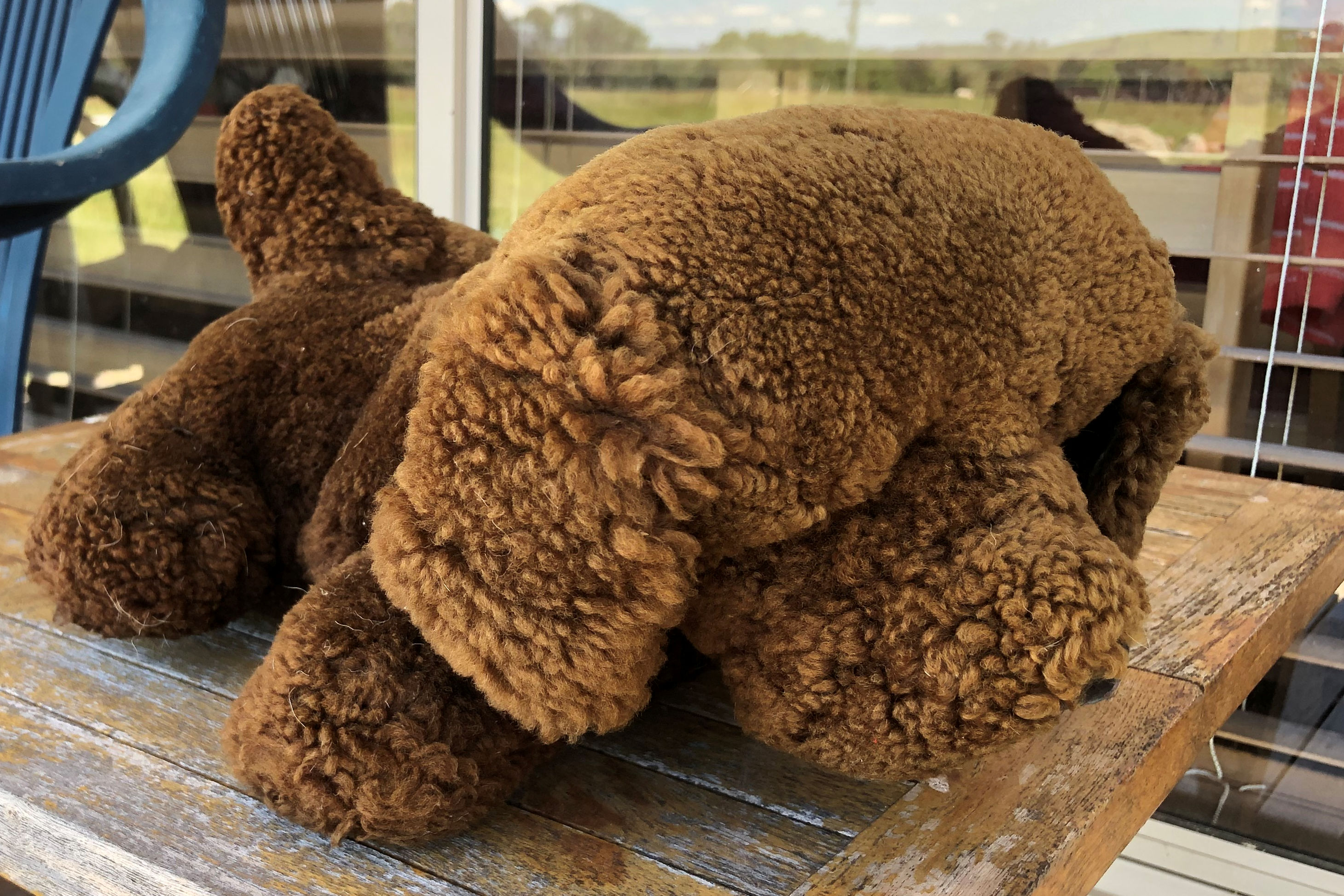 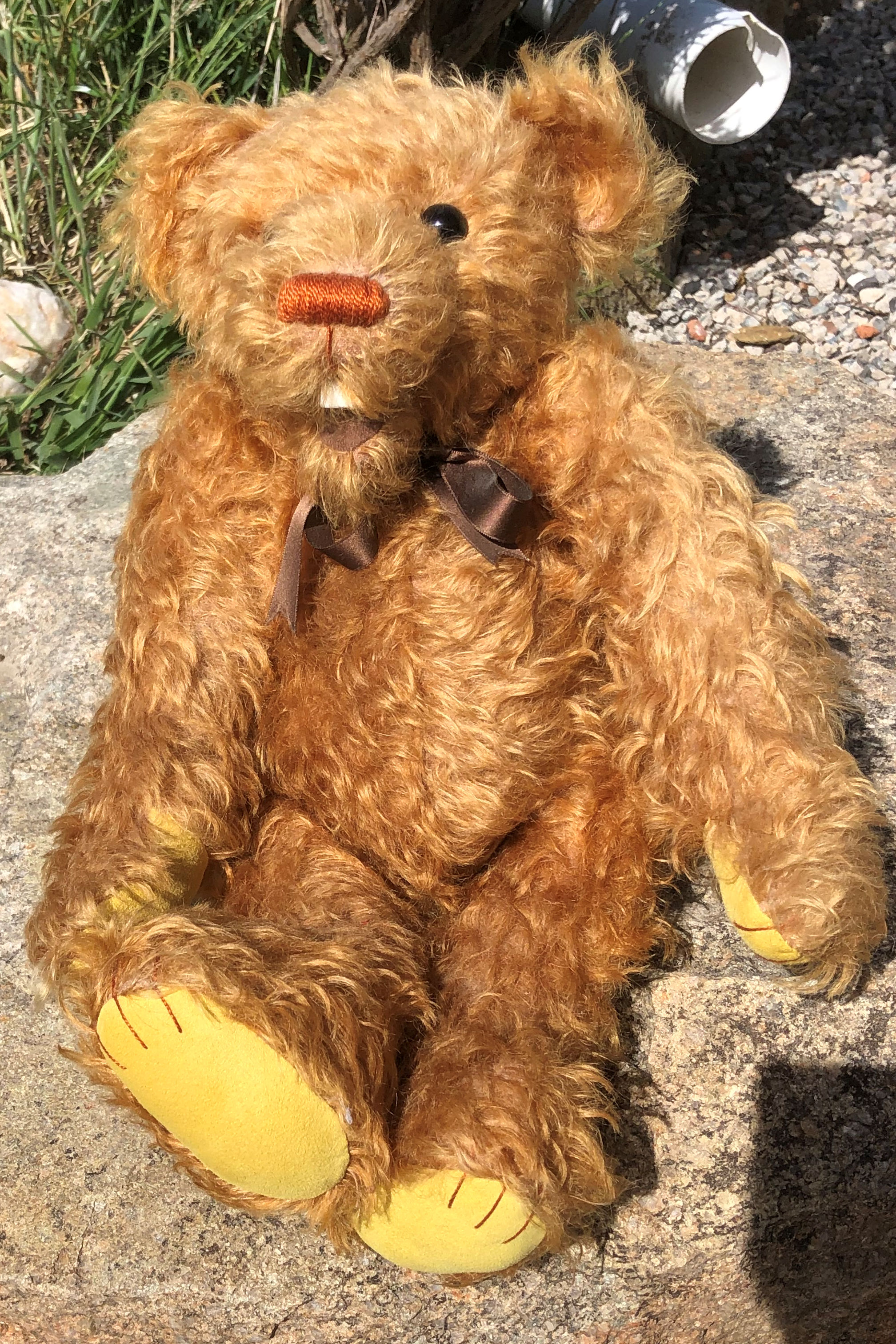 From my friend Fred Crews, retired English professor (and chair of English) at Berkeley, critic of Freud, and writer for the New York Review of Books.

Your teddy bear has been brawling in the streets of Chicago, and he shows the effects. Not advisable. Here is my mother’s Steiff from 1908, when she was four years old—an indoor pet ever since. 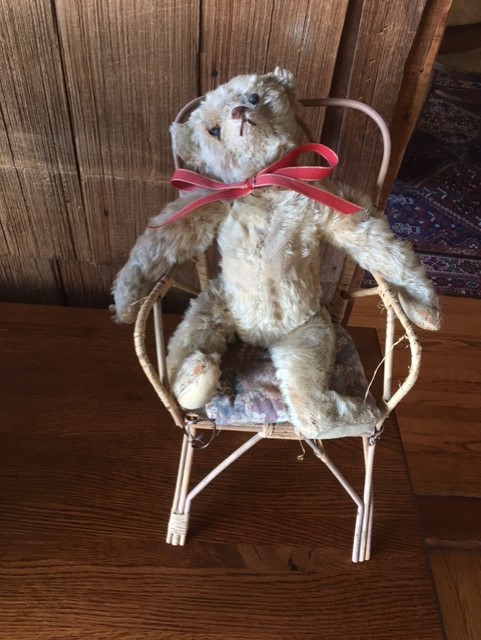 When I pointed out to Fred that Steiff co-manufactured the original bears starting about 1904, and he may have a valuable antique on hand, he responded thusly:

We always knew it was a Steiff. I now remember that my mother called him “Oscar.” And here she is below, shortly before receiving the bear as a gift from her uncle (not shown). My mother’s name was Robina Gaudet, but she was always Ruby. Those are her parents in Bethel, Maine. 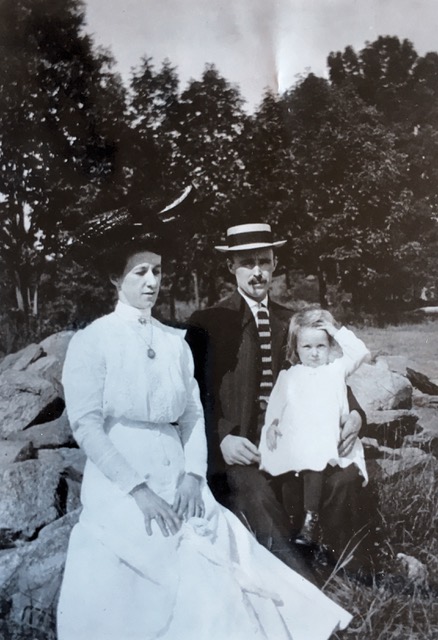 My bear Mikey is about 85 years old. Some fur is missing due to being thrown back and forth across the street. Sorry, no overalls 😀 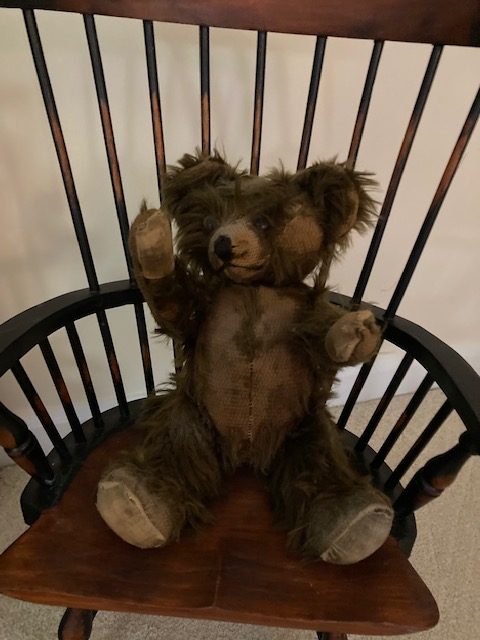 And another from Linda, which she made herself:

I thought you might get a kick out of “ShakesBear” that I made for my mother.  I think it was in the 90’s when there was a fad on Bear names, e.g.: Bearishnikov, etc.  She was quite taken with the idea, being a bear aficionado, so I made this one for her.  Not as old as Mikey, Shakespeare is probably only 45. 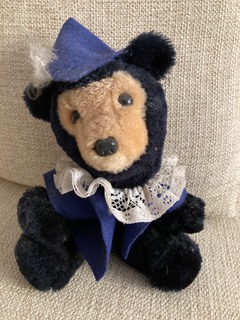 A punny bear from Joe McClain:

And I thought you might be interested in a rare adult-onset teddy. My daughter Lauren gave him to me about 10 years ago, inspired by a story my mother told her. When I was little, I misunderstood the hymn “Gladly, the Cross I’d Bear.” So, please meet Gladly, the Cross-Eyed Bear. I had no teddy when little, but I did have Ruffy, Tuffy (dogs) and Harry the Owl. 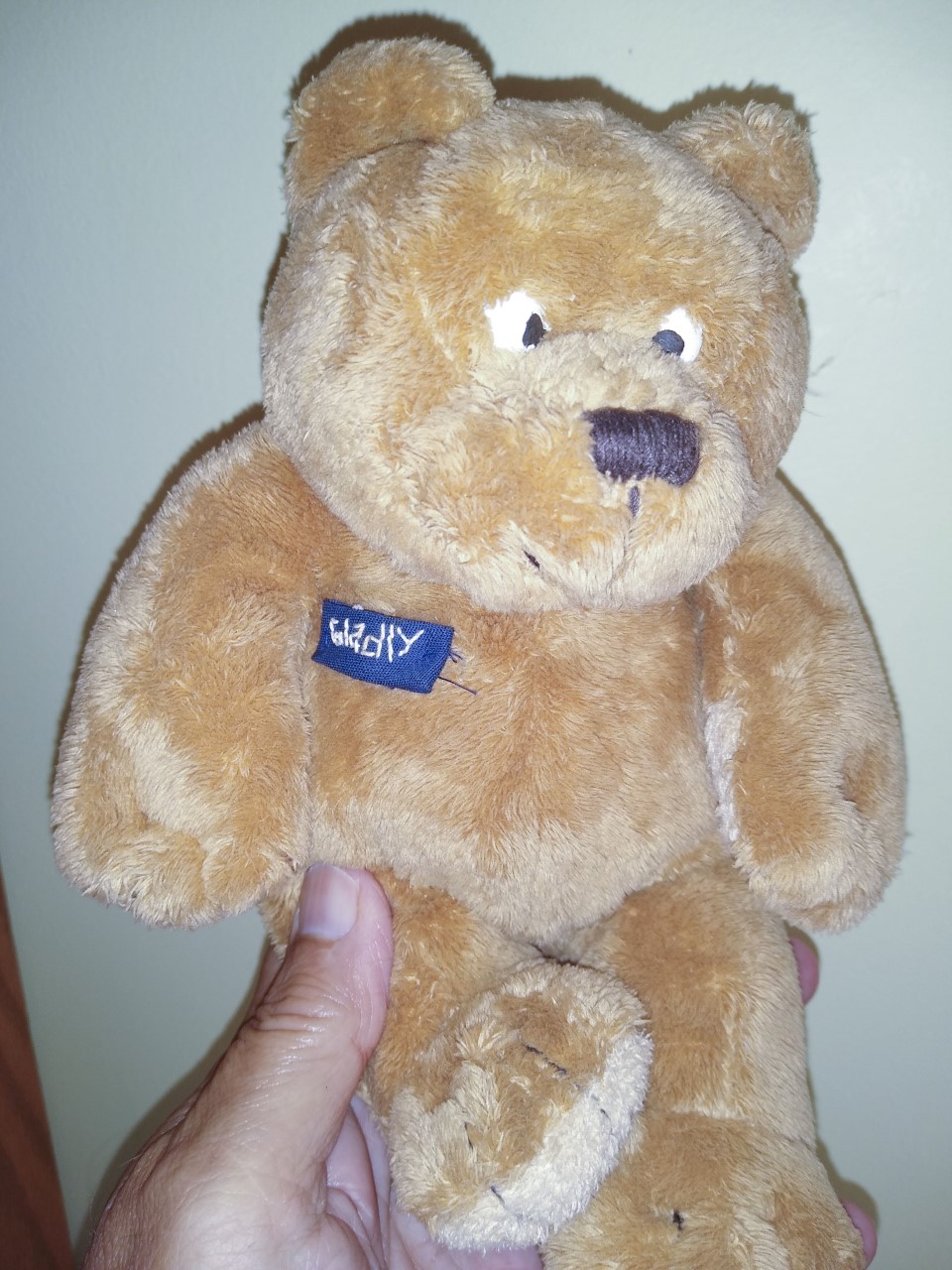 From Steve Pinker. This website once had a contest to guess the name of his bear, for I didn’t find it on the Internet and thought readers could do some sleuthing. It turns out that Steve mentioned Wilfred in his lectures at Harvard, and one reader had attended one. So here’s Wilfred with the backstory from Steve:

Wilfred was a gift from my ex-wife Ilavenil Subbiah (a graphic artist and publicist working with MIT and with Commonwealth Fusion Systems, the fusion start-up), when we were first dating. She has a collection of more than a hundred bears. 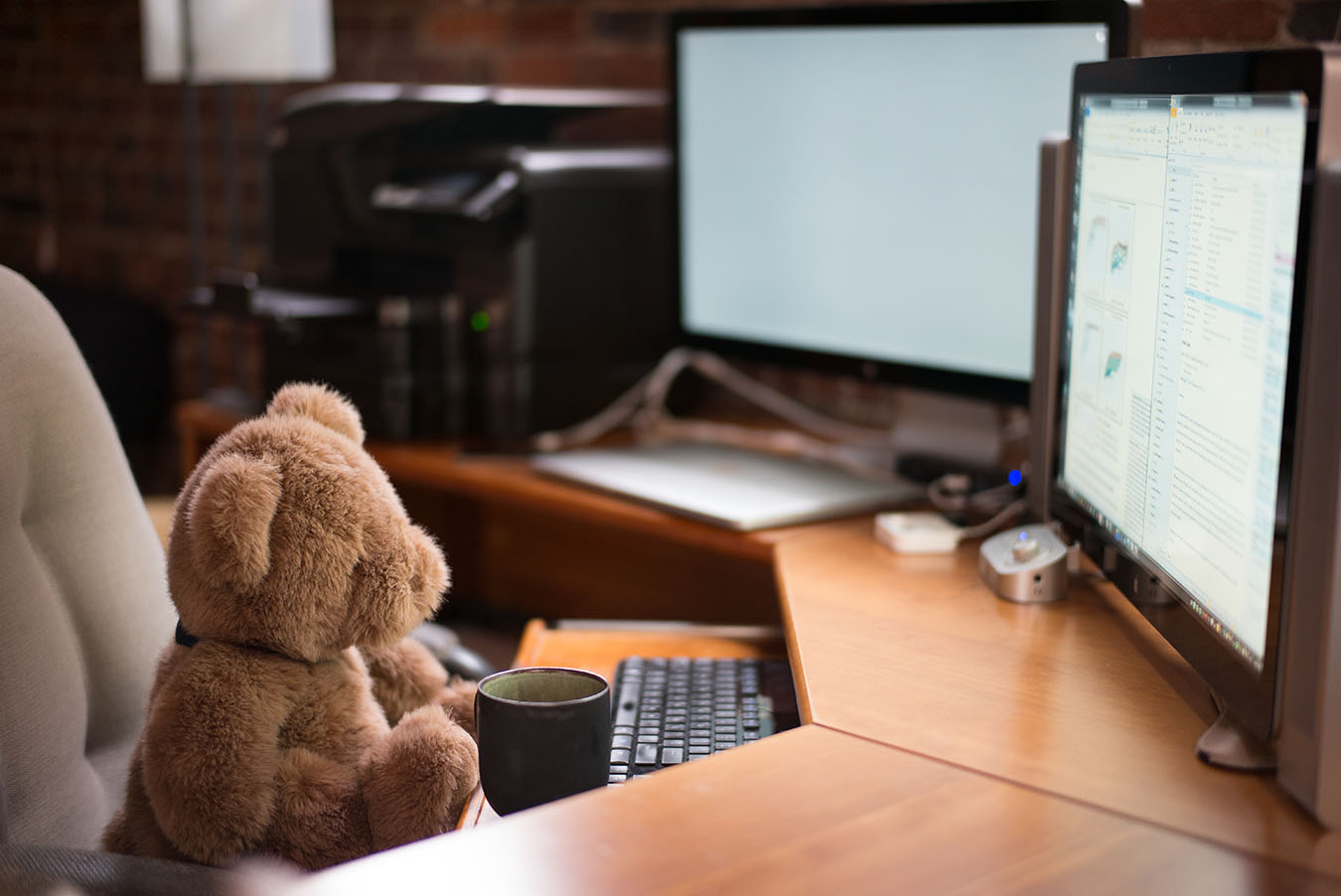 From Matthew Cobb. I featured this in the previous post, but I’m putting it up again because it’s Matthew.

Here are pictures of my Teddy, who’s just called Teddy. I have had him for over 55 years, maybe since I was born – not sure. My sister Liz  made him the tartan trousers when I was very young – never known him without them. He has got a bit battered – his eyes were bits of brown  glass stuck on very long rusty dangerous bits of wire, which were  shoved into his straw-packed head. They were removed, probably for safety reasons, long ago. Now he looks a bit blind. His paws were covered with some kind of fabric, but that obviously rotted and got replaced about 20 years ago by my mother, who looked after him until about 10 years ago when I reclaimed him. My mum also did some brain surgery when, about 50 years ago, Teddy got left too close to a fire and suffered a nasty singe-based trepanation on the back of his head. She patched him up – not with vinegar and brown paper but with a piece of some old yellow curtains. He’s not very cuddly (the straw is very solid), nor very flexible, and  is getting rather threadbare (threadbear) but I suppose that’s also a  description of his owner. . 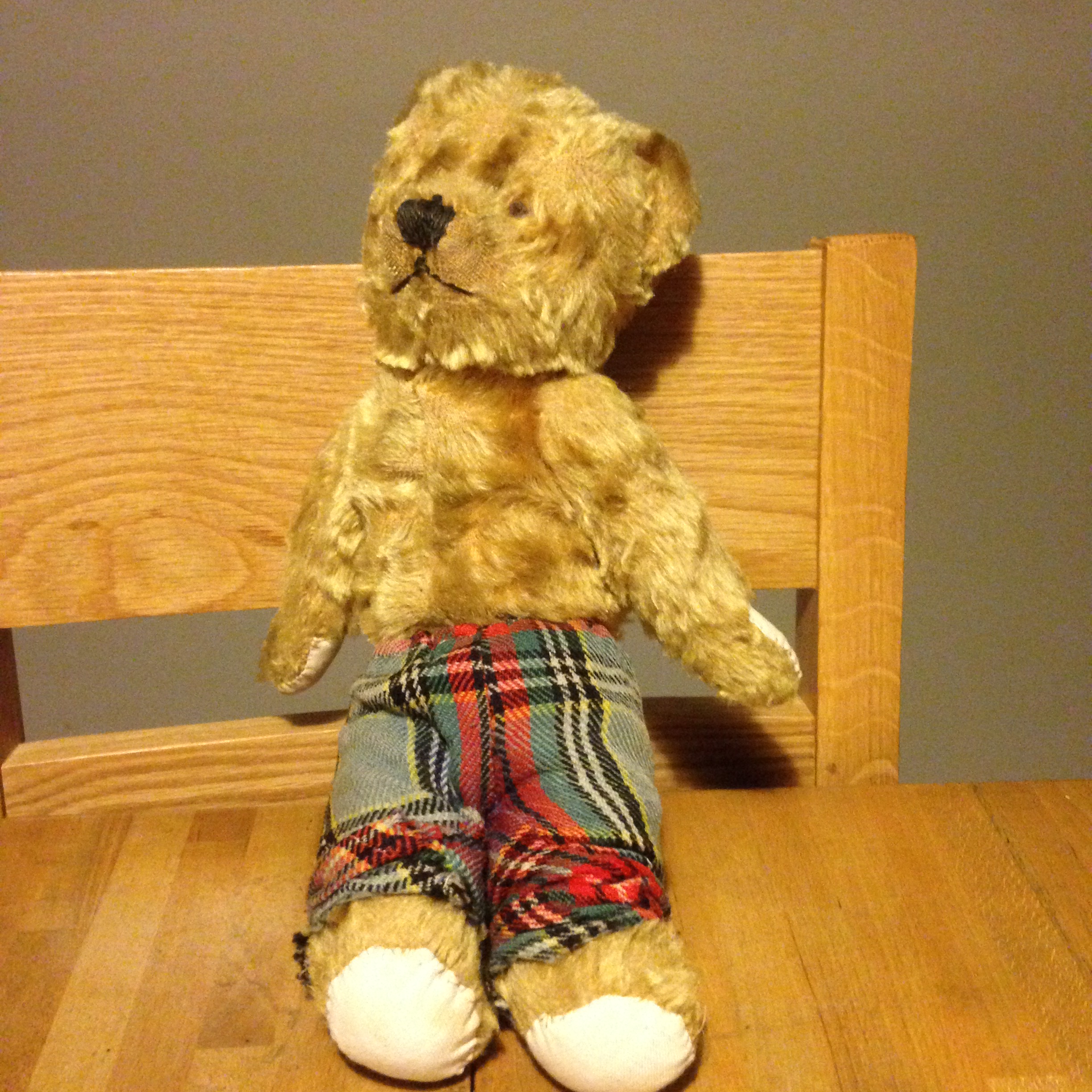 What a coincidence you should be asking for teddy bear photos; I arrived at my mother’s house for a visit the other day and found this collection in the closet of the room I’m staying in! None of them had been mine though. I had a favorite monkey doll as well as a Casper the Friendly Ghost doll that went everywhere with me, but no teddys. I believe these belonged to one of my sisters. 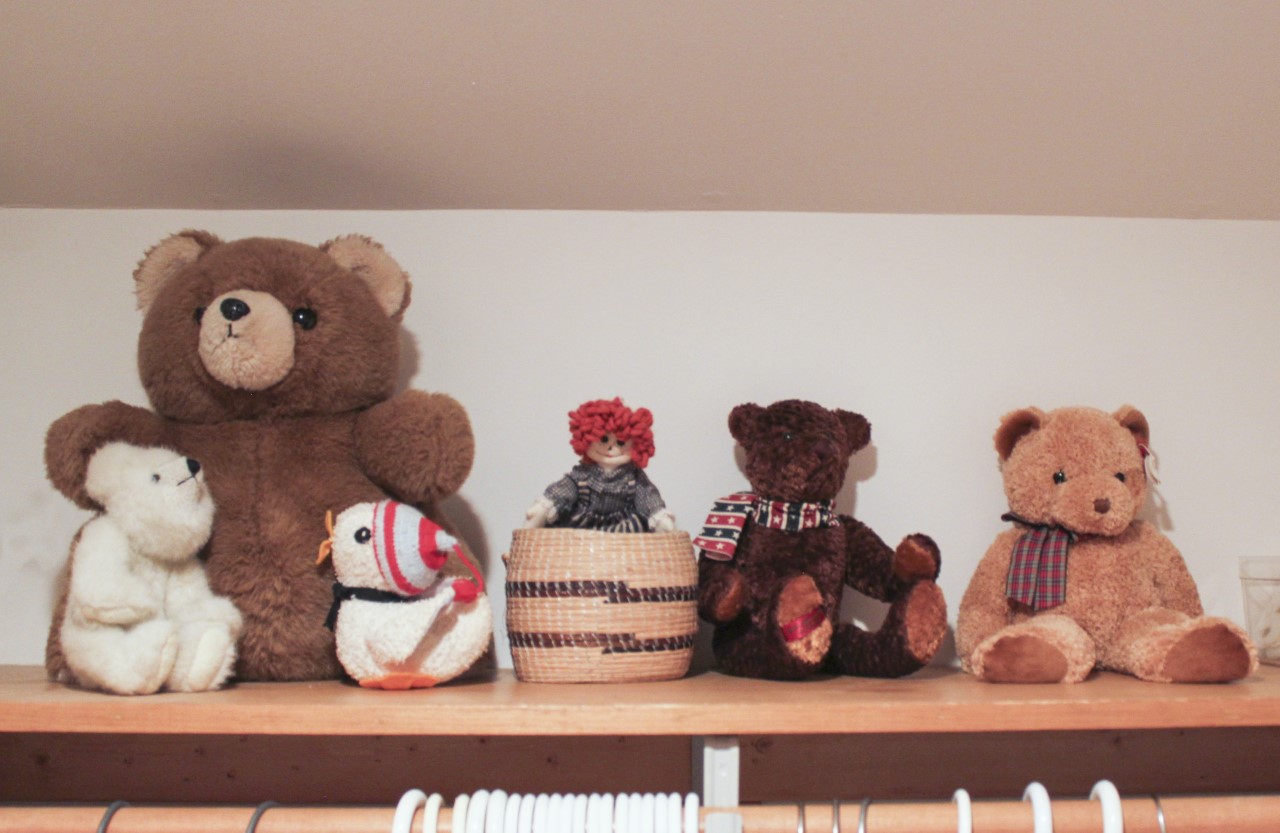 Matt Young, who writes on The Panda’s Thumb website, proffers his own bear, Steph-Steph:

After seeing your splendid Teddy bear, my wife reminded me that my Teddy bear is a panda. Her name is Steph-Steph, and she is named after Stephen Jay Gould. Her cousin, Professor Steve-Steve, is a founder of The Panda’s Thumb. Here she is in 2005 lecturing about giant tortoises to a crowd of one. 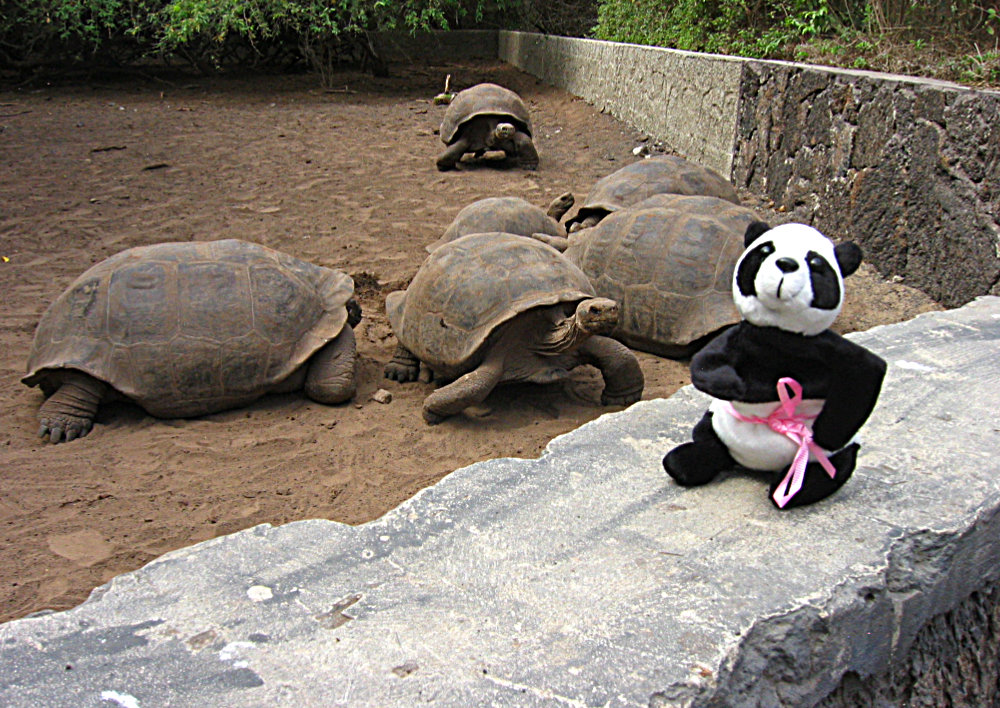 Not a childhood toy– but a current companion with his constant companion..

Eloise, the bat and Edward, the bear: 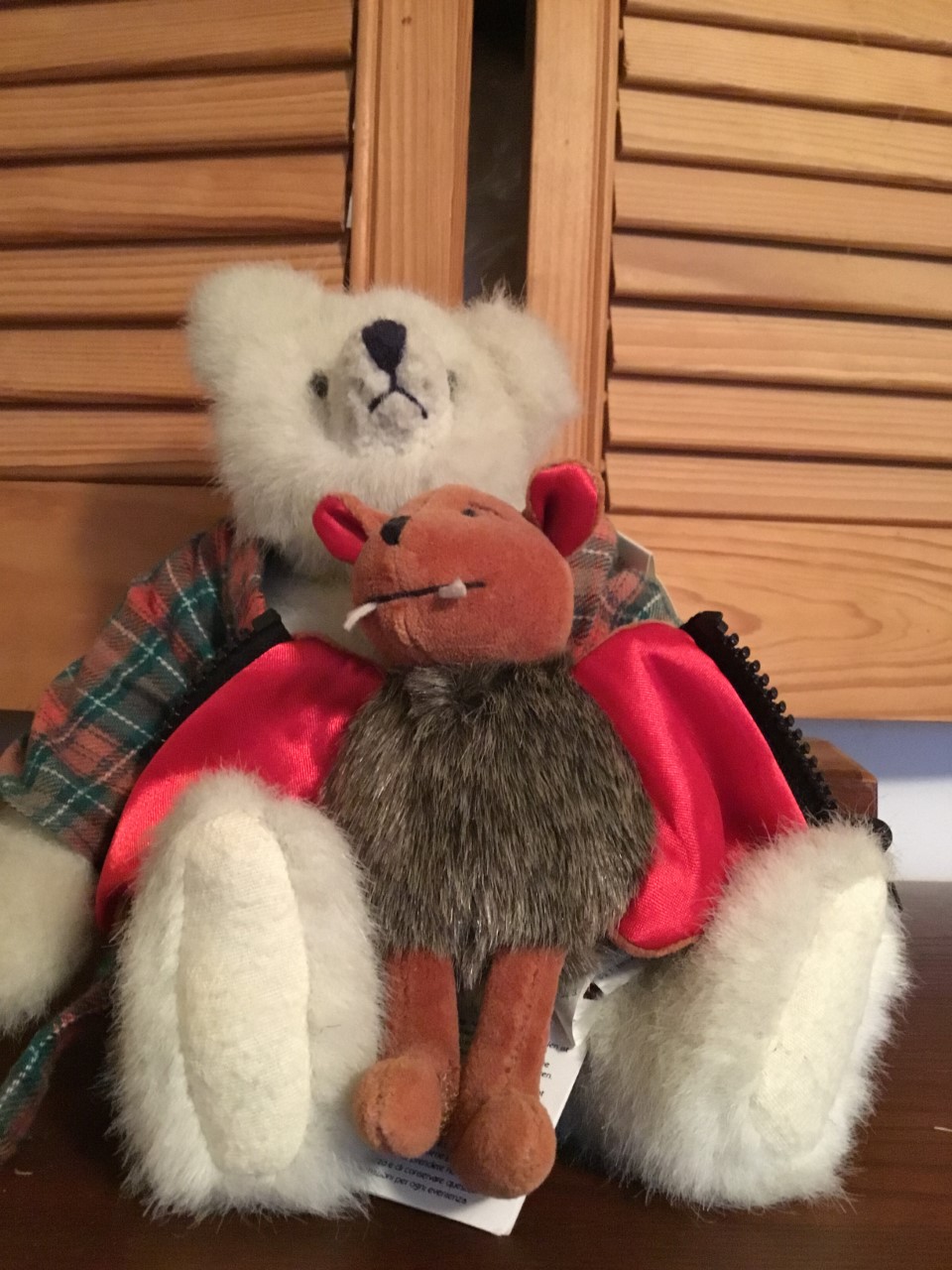 This is one of my oldest beloved childhood treasures. I used to stage little tea parties with my Teddy, also accompanied by a small stuffed lion and a beautiful cat hand puppet. The tea set was a mini-set that I gifted to friend’s little one after I found it in my mother’s apartment after she died. I could not bring myself to part with the bear, the lion and the cat puppet, which now sit in my bedroom together. 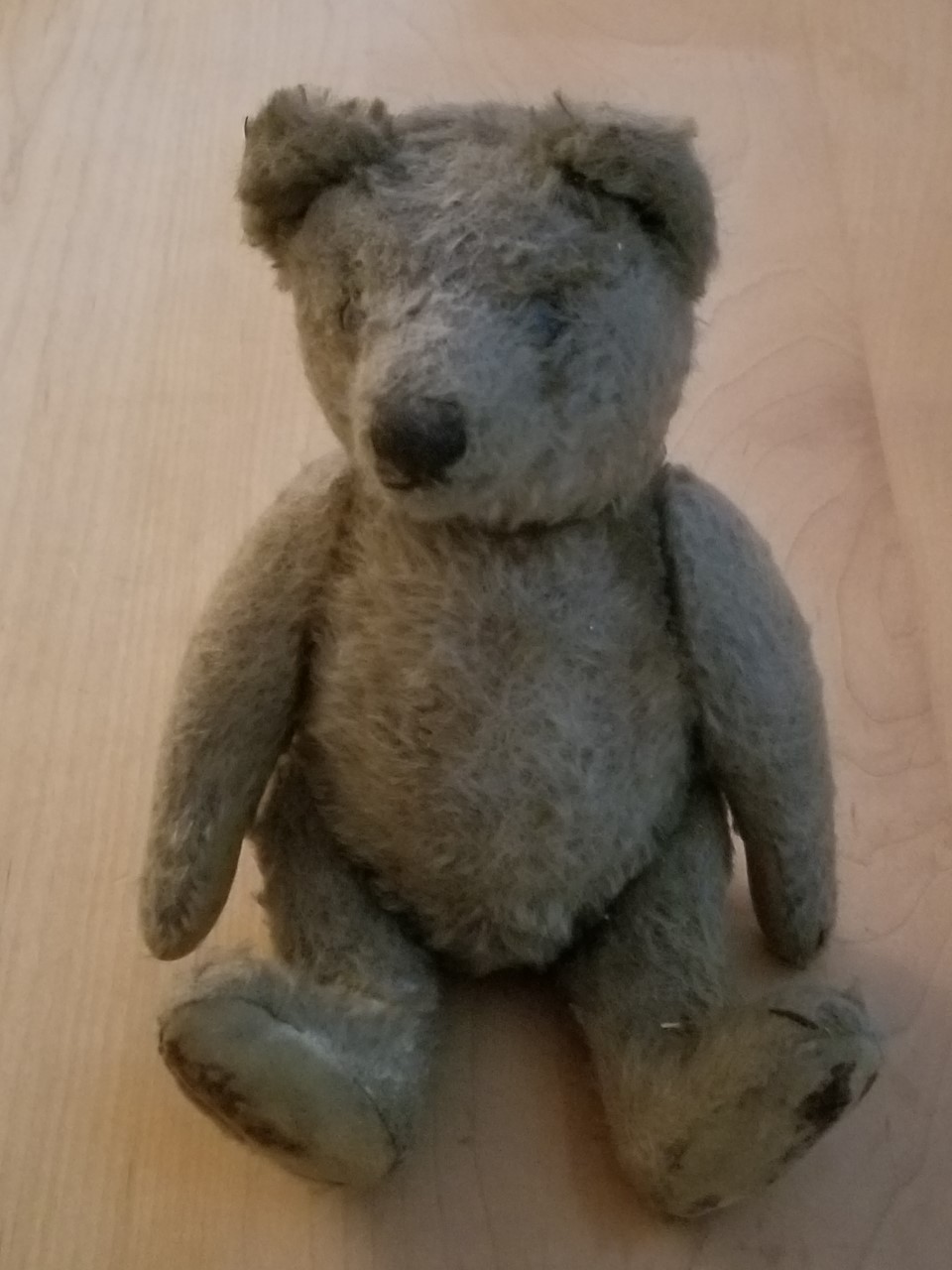 From Norm Gilinsky, the most messed up plushie of all!

Hah! I thought about this when you mentioned your Teddy the other day. Here is my childhood stuffed toy—a dog named “Sooty.” I carried him with me night and day until the stuffing came out of him. He’s completely flat! My mother kept him for many years and eventually gave him back to me. If you look closely, Sooty is mounted behind glass in a Riker Mount display box—a type of museum case. Sooty is somewhere between 63 and 64 years old. Doesn’t look a day over 60! 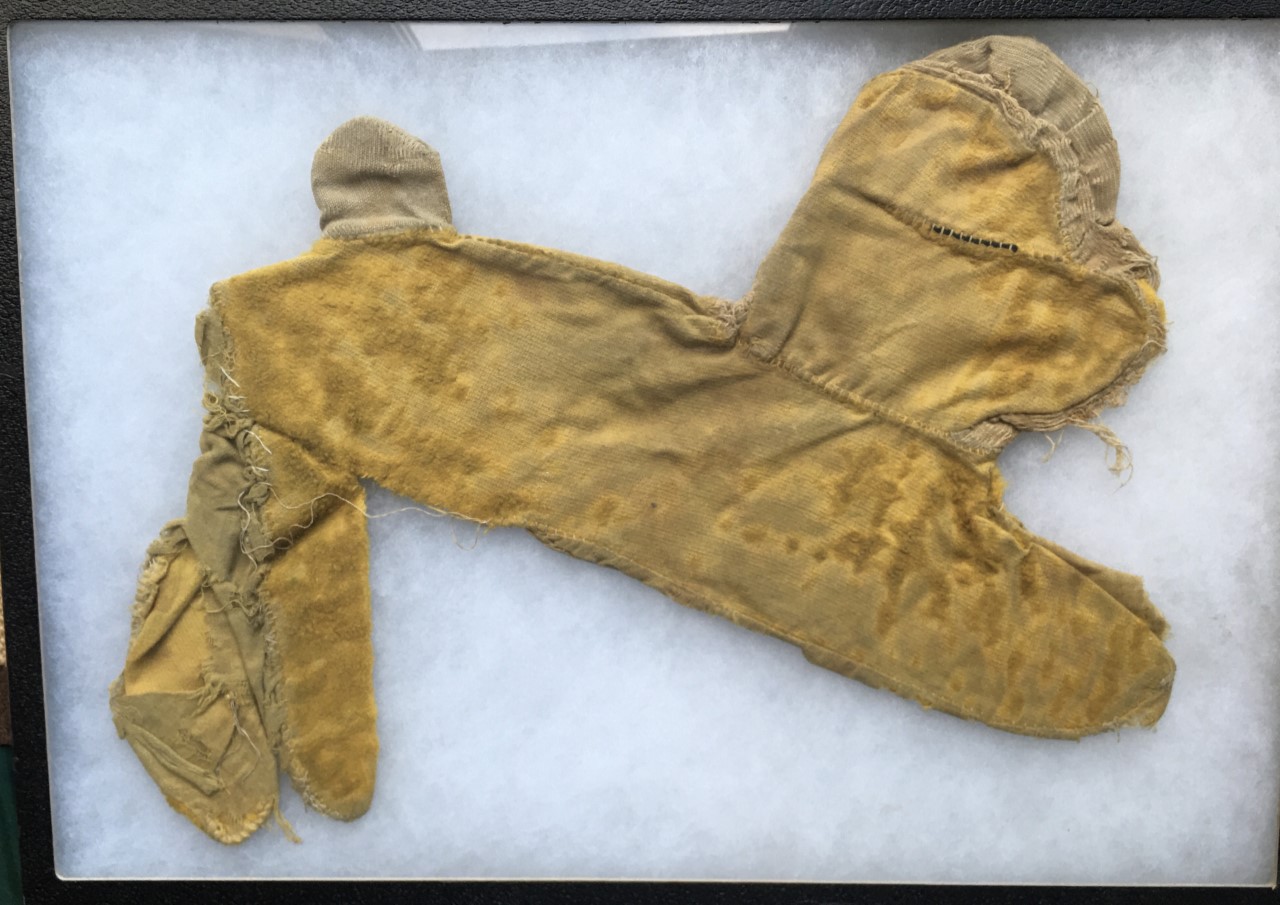