I’ve subscribed to The Righting, a daily news summary of right-wing articles compiled by leftists. Perhaps that explains why the daily list of links shows how bull-goose loony much of the Right is, even when the articles come from the more respectable right-wing sites, like the National Review.  The articles are hilarious in their denunciations of the Left (they are of course anti-vax and hate Biden), but even a blind pig can find an acorn—an acorn which you’d only find on conservative sites. One of these is their singling out of egregious wokeness.

This one, from of all places a right-wing entertainment site (Hollywood in Toto: “The Right Take on Entertainment”), describes the attacks on the television comedy “Seinfeld” for being racist, sexist, able-ist, and so on. The article links to a lot of criticism of the show.

Now I never watched “Seinfeld” much; for some reason the fact that nothing ever happened on the show bored me, but there were some episodes I found hilarious, like “The Chicken Roaster,” in which Kramer gets hooked on Kenny Rogers’ Roasters, a chicken takeout across the street from their apartment. But its flashing sign, which makes Kramer’s apartment into a nightmare of disco proportions drives him nuts. And the funniest episode I ever saw was the famous “Soup Nazi” one, based on a real soup-vending curmudgeon in New York City.

I never paid much attention to the show’s lack of “political correctness”, as it was called at the time, but now people are sniffing out infelicities in very old t.v. shows and calling them out. Back then, for instance, “Soup Nazi” was inoffensive; now it would be an insult to all brash people, or seen as a diminution of Nazism. That trend is what the article below is about (click on screenshot to read).

It’s only one of the most popular sitcoms of all time, a comedy that sparks new fans whenever it shifts to a fresh platform. It did it again earlier this year when Netflix began airing the show’s nine sublime seasons.

And, for at least six years, the woke mob has insisted we shouldn’t laugh along with Jerry, George, Elaine and Kramer.

Take this 2015 article, which declares one of TV’s supreme sitcoms is now too “racist” and “sexist” to enjoy. The article sprang to life after Seinfeld admitted he’d never play a college gig because students are too easily offended.

If you stick a thumb in the woke mob’s eye they quickly retaliate.

Still, the article didn’t inspire a movement. Nor did subsequent pieces hammering similar themes. The far-Left Bustle attacked singular jokes from the classic show, 13 in total, as being offensive with its 2018 screed.

The trend continued in 2020, with Cheat Sheet bemoaning that Seinfeld refused to apologize for the show’s jokes. The woke mob loves apologies. They’re rarely accepted, of course.

The Hostage Apology is akin to Struggle Session lite.

The far-left Screen Rant decided, apparently, that 2021 is the year to kickstart “Seinfeld’s” cancelation. Back in May the site ran an op-ed taking down George for his problematic behavior.

His antics “haven’t aged well,” we’re told. Screen Rant wants every character in a sitcom to behave like a gentleman, thus negating all of George’s broad comic tics.

Looper attempted its own cancellation essay this year, all the while admitting how foolish such a measure is.

Sure, Jerry, Elaine, George, and Kramer — and on a meta level, Larry David, Jerry Seinfeld and everyone else behind the “Seinfeld” scenes — would undoubtedly laugh at the notion of an article like this, offering a snarky remark and a reminder that the best humor (and an invaluable life necessity) comes from laughing at things society takes seriously. Nevertheless, it’s hard to dispute — these “Seinfeld” moments have not aged well.

You can read the articles (I’ll put three examples below from the Screen Rant article and three from another piece), but it was my impression that Seinfeld’s comedy was meant to be edgy by taking on topics and reactions that people often have, but keep to themselves. In other words, it airs publicly what people are thinking privately, but were allowed to air in the private group of Jerry’s friends. Three examples from Screen Rant. 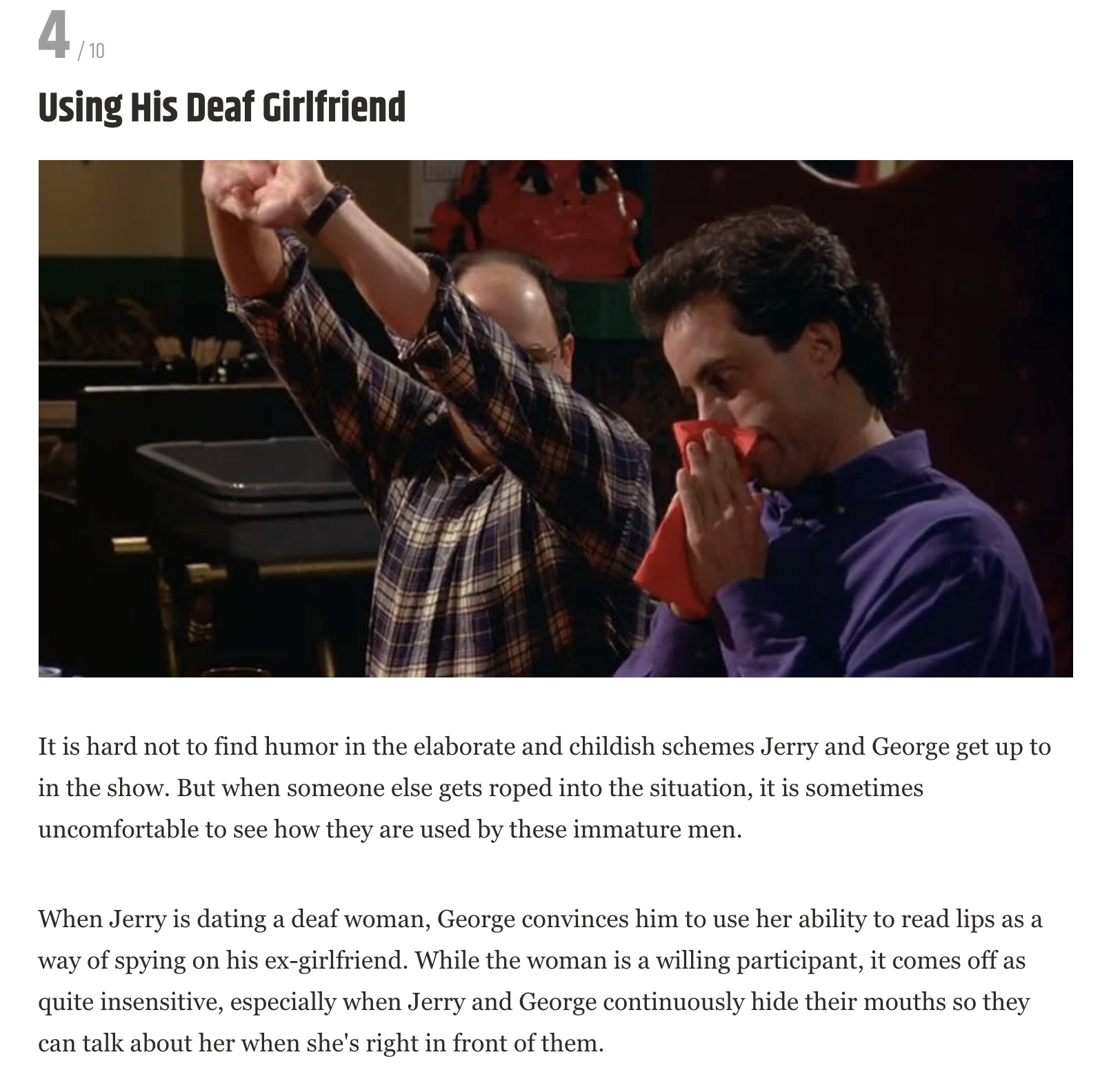 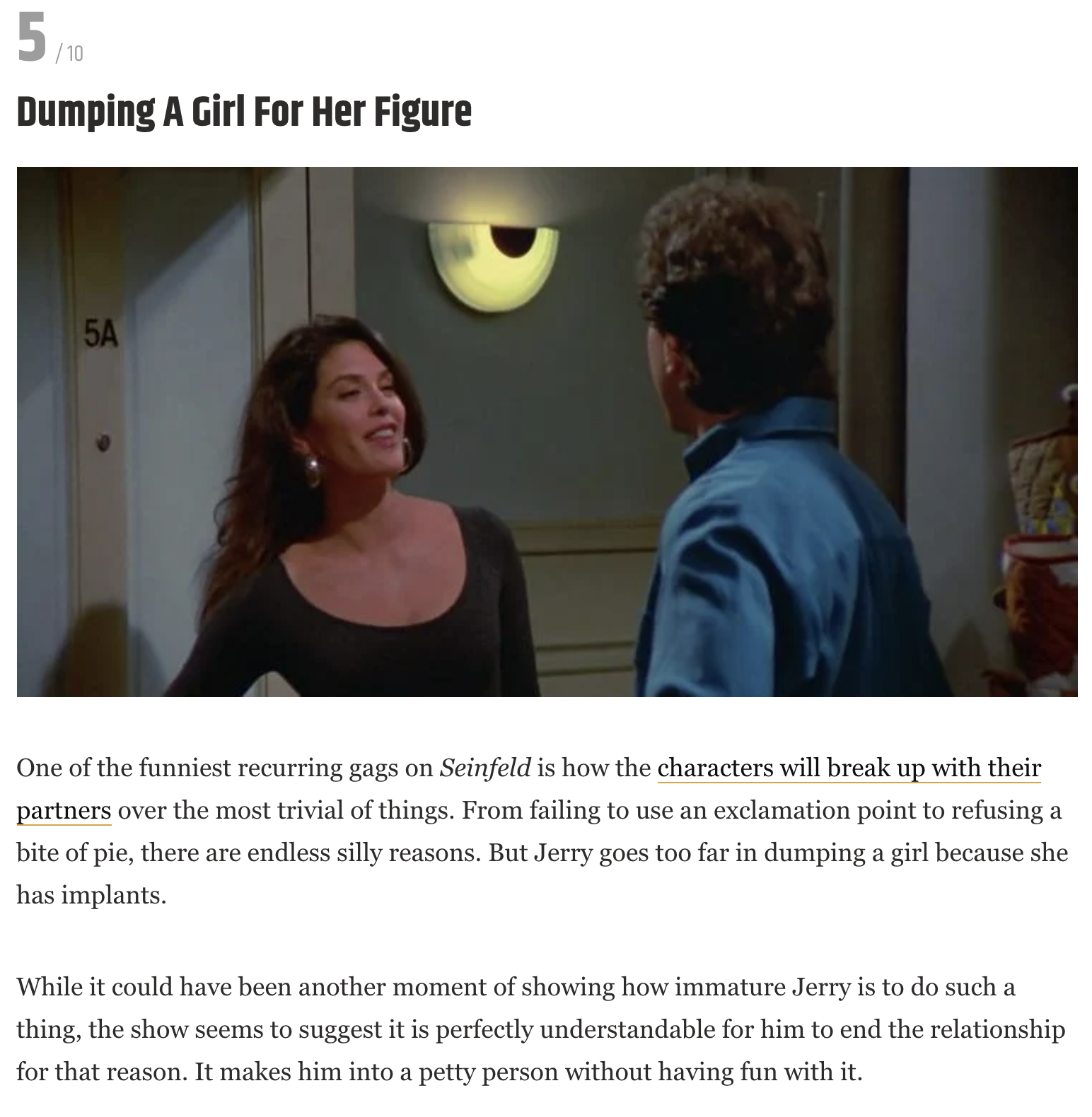 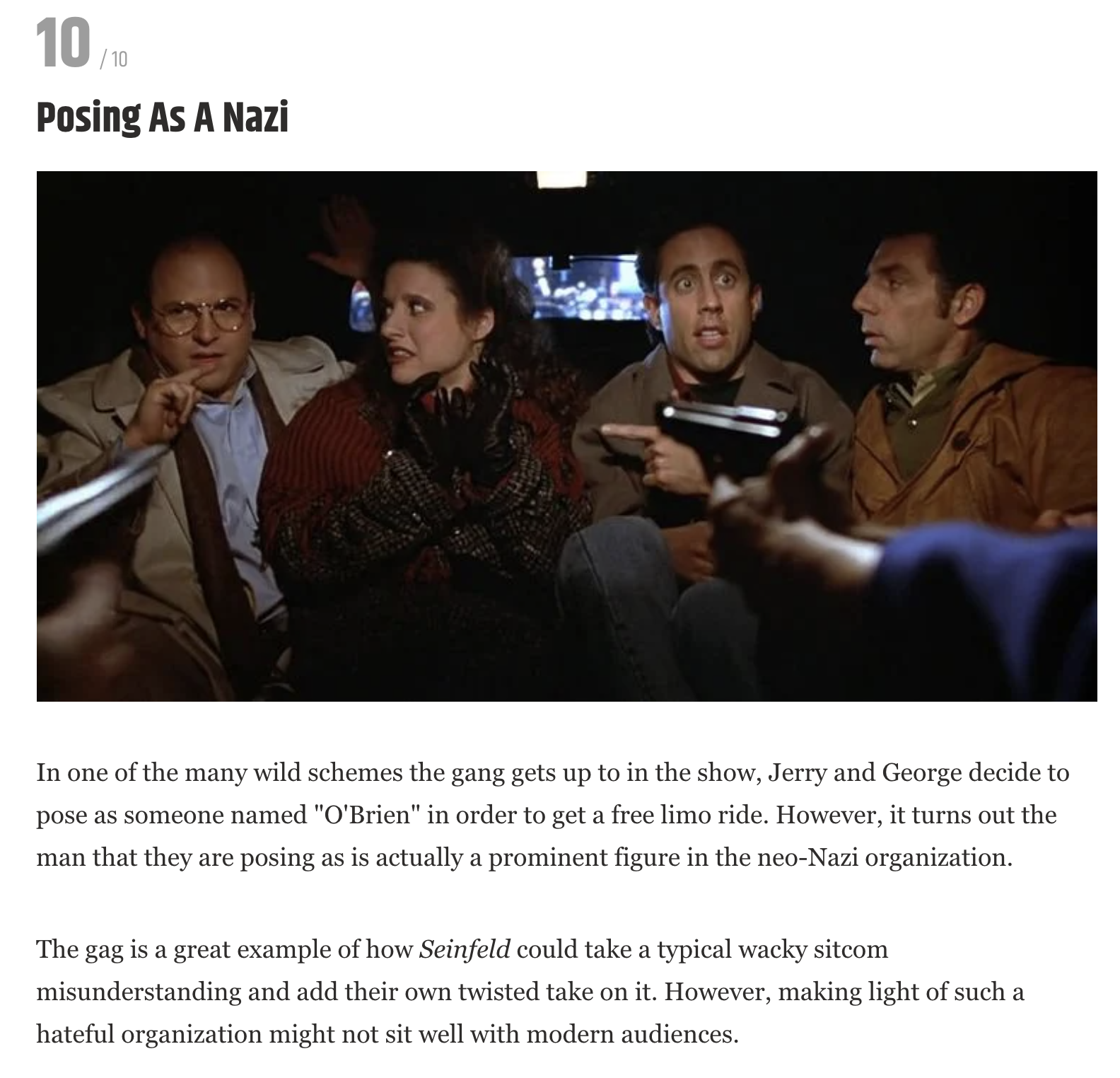 Three examples from the Bustle article, “These 13 jokes from ‘Seinfeld’ are actually super offensive“: 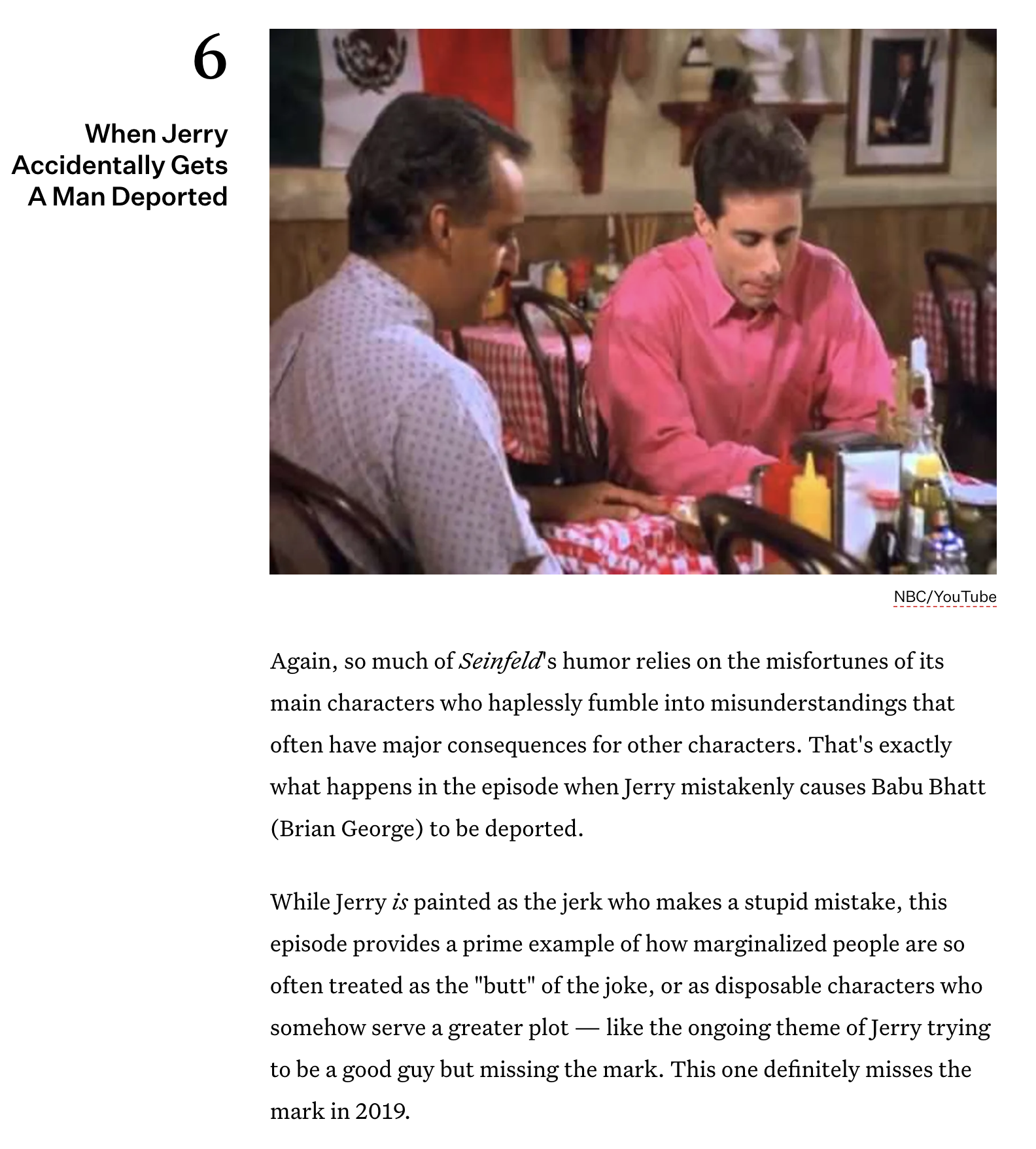 Well, I didn’t think they’d find this episode “super-offensive”, but I was wrong. 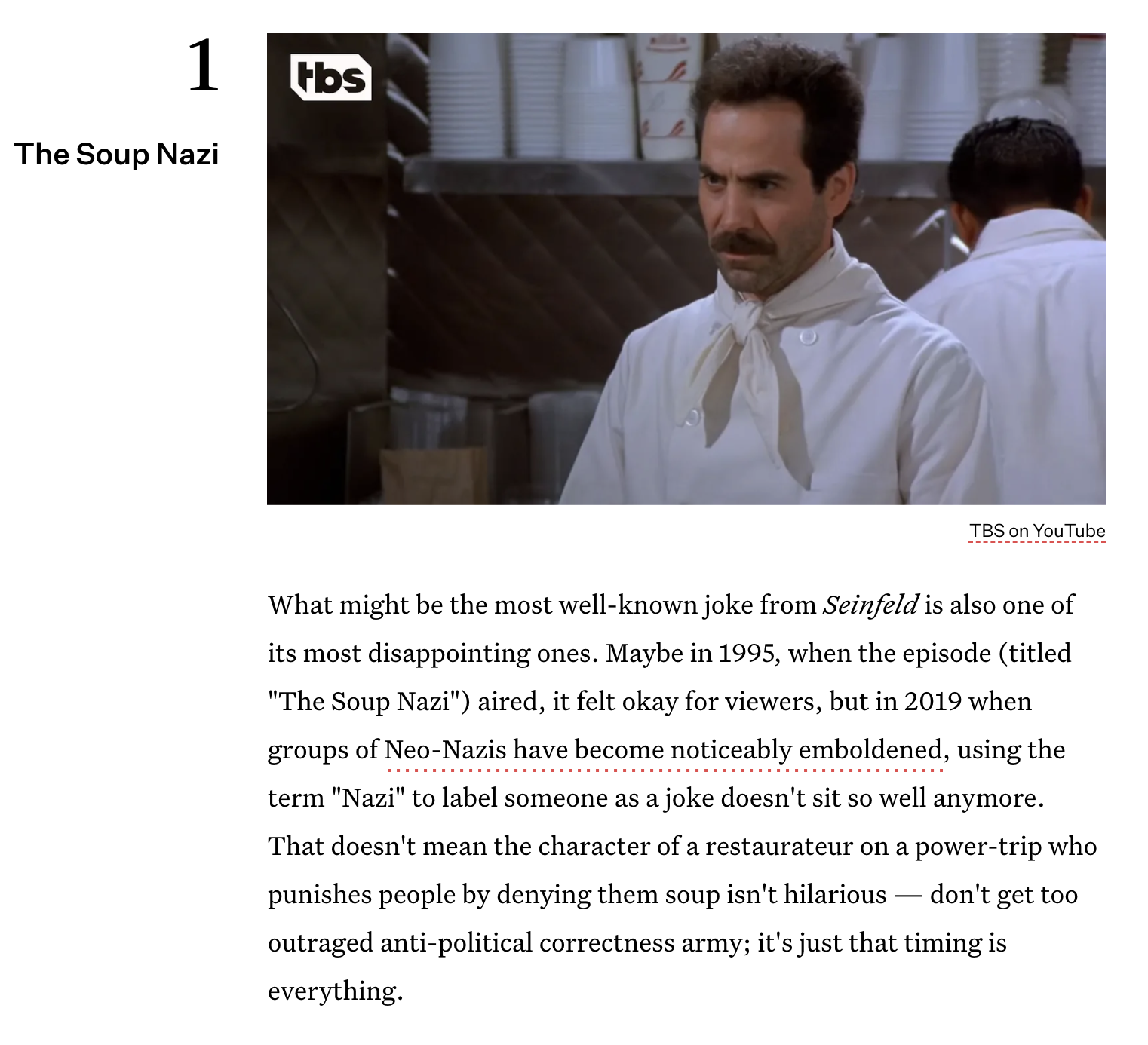 I don’t find what’s below particularly racist, for some men are attracted to Asian women. Others are attracted to black women, or to Hispanic women. I’ve never heard this as characterized as “saying you like everyone in a race”. Rather, what some men find attractive are the features of women from some ethnic group, and not all women or all people.

This isn’t “racist” unless somehow you stereotype the women by expecting them to all behave in a defined and similar way.  But the relationships I know of involving white men and nonwhite women have all been pretty much like intra-racial relationships, with the same affection and closeness. The women are, after all, human beings. 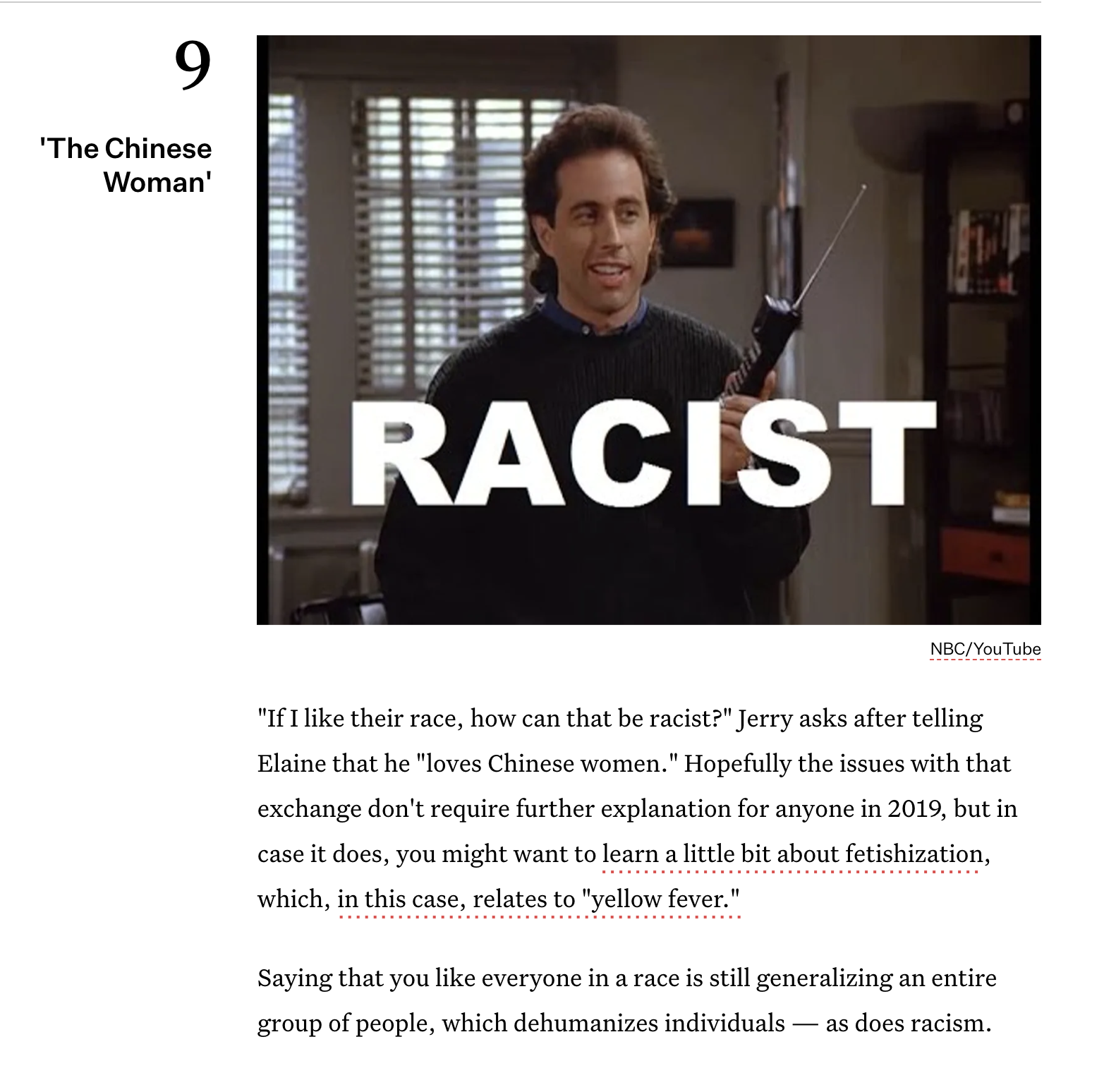 Many of the ten jokes and incidents from the Bustle article, as I said, deal with people’s feelings that they’re not comfortable making public except to one’s very good friends. In other words, they highlight life as it is, warts and all. No character on Seinfeld is portrayed as a saint: they all have their flaws, obsessions, and biases.

This kind of humor was the metier of people like Lenny Bruce, and now of Dave Chappelle, but it doesn’t play well with the Woke. As we know from Titania McGrath—whose sarcastic tweets get mistaken for genuinely “progressive’ views”—one characteristic of Wokeness is that it lacks a sense of humor.

Seinfeld and other comedians have said that they’ll no longer do standup at colleges and universities, and it’s not hard to see why. Here’s Seinfeld on “political correctness”.

92 thoughts on ““Seinfeld” in the cancellation crosshairs”