The Caltech Weekly, the University’s magazine, describes all the renamings going on—renamings of buildings and professorships. Click on the screenshot below:

The reason for the changes? According to the report below, the three individuals whose names are effaced, were involved in the eugenics movement—specifically, the Human Betterment Foundation (HBF), which collected data on and advocated for compulsory sterilization of people whose reproduction was seen as undesirable. I quote from both the article above and the report below.

The Caltech Board of Trustees, in accord with recommendations from President Thomas F. Rosenbaum, the Committee on Naming and Recognition (CNR), and the Ruddock House Renaming Committee, has approved the following names to replace those on campus assets and honors that previously memorialized individuals affiliated with the eugenics movement:

The “eugenics movement” to which they refer is the HBF, which the report below characterizes this way:

Apparently the HBF did have some weight, as one paper argues that over 20,000 Californians in state-run homes and hospitals were involuntarily sterilized between 1909 and 1979: a full third of all Americans eugenically sterilized during this period.

Here are all the renamings. All of the replacement names of people were done to honor people who increased diversity, with the exception being geneticist E. B. Lewis, a Nobel Laureate:

Basis for recommendation: This recommendation follows extensive consideration of Millikan’s participation in the eugenics movement as a late trustee of the Human Betterment Foundation (HBF); of Gosney as HBF founder and president; and of Chandler, Munro, Robinson, and Ruddock as either HBF founding trustees or members. The CNR also considered evidence of Millikan’s stances on gender, race, and ethnicity.

. . . Millikan’s stances on gender, race, and ethnicity Documents and scholarship considered by the CNR also paint a disquieting picture of Millikan’s views on gender, race, and ethnicity. During his tenure, Caltech did not hire a single woman to its faculty, nor did Millikan seem to believe the United States had produced a single woman physicist worth hiring in academia. He held negative stereotypes about Jews, although he did not for the most part allow his anti-Semitism to prevent him from hiring stellar Jewish male faculty during his tenure. He CNR REPORT 6 believed that Nordics (white Northern Europeans) were naturally and morally superior to other peoples, and that Southern California was “the westernmost outpost of Nordic civilization.” He privately wrote with contempt about people of color, referred to Blacks in Mississippi in disparaging language, and thought that granting Blacks the right to vote was “an unthinkable disaster in view of the sort of people they now are.” Millikan’s stances on gender, race, and ethnicity may have been more common in his time, and even the norm for his socioeconomic status. But it would fly in the face of historical truth to excuse sexism, racism, and xenophobia as inevitable and universal in Millikan’s time.

Harry Chandler Chandler was the longtime publisher of the Los Angeles Times. From 1935 to 1941, under Chandler’s management, the Los Angeles Times published the HBF-sponsored column “Social Eugenics.” In early October 2020, the Los Angeles Times editorial board issued an apology describing the paper as “deeply rooted in white supremacy” for at least its first 80 years. Chandler was also an active developer of Los Angeles whose projects were often plagued by controversy. He eventually became the largest real estate owner in the United States. Chandler helped establish Caltech, the Hollywood Bowl, and Douglas Aircraft. He was a member of the Caltech Board from 1920 until 1944, and a member of the HBF. Chandler was one of the individuals instrumental in recruiting Millikan to Caltech, and he also helped organize The Associates of the California Institute of Technology.

They also explain an earlier renaming:

As part of the Institute’s commitment to remove from campus buildings, assets, and honors the names of individuals who participated in the eugenics movement, Caltech has renamed the former Linde + Robinson Laboratory as the Ronald and Maxine Linde Laboratory for Global Environmental Science. The name change is effective today, August 2, 2021. This is the first in a series of renamings that were authorized by the Caltech Board of Trustees in early 2021 to bring campus memorializations in line with Institute values. The legal process to change the names on the remaining buildings, assets, and honors is underway; additional updates will be provided when appropriate.

For more information on efforts to create a more inclusive Caltech, visit the Diversity, Equity, and Inclusion site.

The principles for renaming are here, and you can click on the screenshot below to see the 77-page final report: 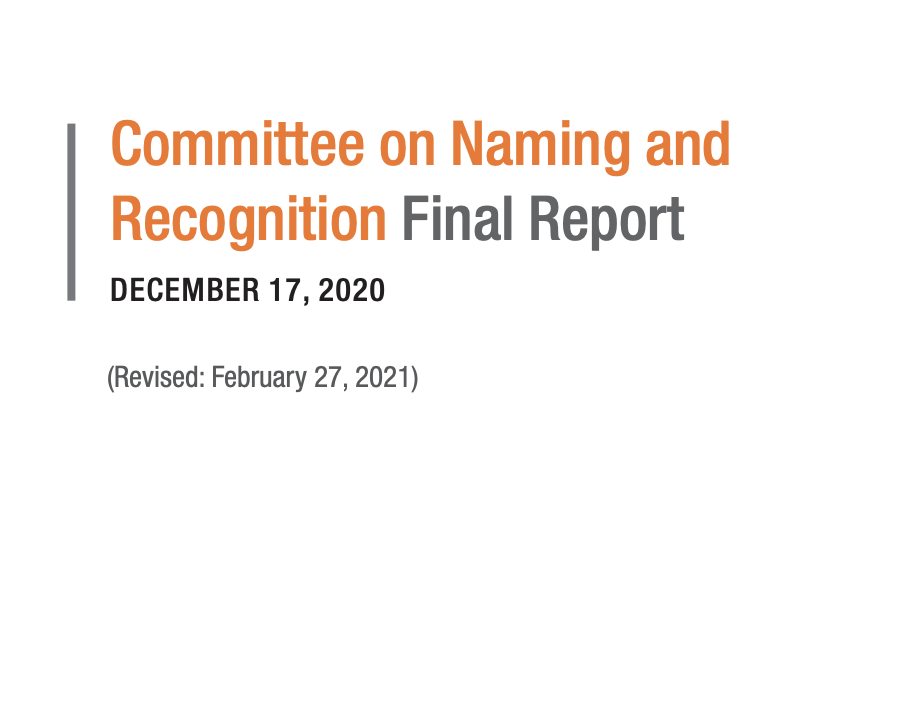 As I’ve said before, I have two criteria I use when deciding whether a name should be removed:

a. The name was to honor the person’s good deeds and not bad deeds
b. Overall, the person’s life was a net good for the world rather than a net bad.

How do we judge these? Well, clearly criterion a. is satisfied in all these cases, especially Millikan, who won a Nobel Prize for physics for work done at the University of Chicago (and yes, we have a Robert A. Millikan Distinguished Service Professorship that’s currently occupied).

The problem comes with criterion b.  How do we weigh the life of a scientist, a publisher, and a businessman against the involuntary sterilization of 20,000 institutionalized people? One cannot argue that everyone was on board with sterilization back then, for there were many anti-eugenic scientists who opposed this, including my academic grandfather Theodosius Dobzhansky. Millikan’s failure to hire women is not quite as odious since there were few women physicists back then, though if Millikan expressed the view that women weren’t capable of being physicists, that goes into the negative column.

Since I consider sterilization of this sort an odious and injurious thing to do, even if the people sterilized wouldn’t have reproduced anyway, I weigh participation in the HBF, which did have a big influence on eugenics that was actually practiced, as a serious misstep. Overall, then, I think Caltech is justified in these renamings.

The only beef I have is the way the University characterizes these renamings:

By removing these names from campus assets and honors, the CNR does not propose that Caltech break its ties with Millikan or other problematic figures in its history. It urges that Caltech must not erase any of its history. It holds, instead, that Caltech should delve more deeply into its history, using it to launch initiatives constructed to inform and educate its community and public.

But of course they are erasing Caltech’s history, as well as the contributions of people like Millikan. (David Starr Jordan, another member of the HBF committee, was the founding president of Stanford and an ichthyologist who made seminal contributions to speciation. The cover of my book with Allen Orr, Speciation, depicts paintings illustrating one of Jordan’s monographs. But that will be Stanford’s problem, not Caltech’s.)  If they don’t want to erase the good research that scientists like Millikan and Jordan did, they need to put up a permanent explanation somewhere and mention the good as well as the bad.

And we have to remember that this is going on in Britain as well as the U.S. The difference is that in Britain there never was any eugenics practiced on people. Nor, I think, did British scientists who favored eugenics have much of an influence elsewhere. There may have been people who favored the practice (like geneticist Ronald Fisher, whose eugenic sentiments were based not on race, but class), but they were not on committees that actually injured human beings. It’s one thing to talk the talk, another to walk the walk: espousing a view that could be harmful is not the same as actually causing harm. This is why I’m not in favor of renaming prizes and professorships named after Fisher.

Of course this is a discussion, so I invite you to give your views in the comments below.