Yes, the states are falling like dominoes: just yesterday Ohio passed an abortion law whose enforcement mechanism is similar to that of Texas, but the restrictions on abortion are even more stringent.  Read the article from The Hill by clicking on the screenshot:

The bill, called the 2363 Act, which the lawmakers said is the number of children lost to abortion everyday in the U.S., seeks to ban all abortions in Ohio and, like the Texas law, empower “any person” to bring civil action against an individual who performs and abortion or “knowingly engages in conduct that aids or abets the performance or inducement of an abortion.”

Individuals who filed such lawsuits will be permitted to ask for $10,000 or more, according to Cleveland.com.

The legislation does not include exceptions for rape or incest, but it would shield abortion patients from being sued by individuals who may have gotten them pregnant through rape or another form of sexual violence.

Well goody goody for that last stipulation!  The difference between Ohio and Texas is not only that generous stipulation, but the declaration of illegality of all abortions (for Texas it’s when there’s a fetal heartbeat—about six weeks after conception).

Can you guess which party introduced the bill? You won’t be wrong? One more excerpt:

“The sanctity of human life, born and preborn, must be preserved in Ohio,” Powell said, according to Cleveland.com. “The 2363 Act is about protecting our fundamental, constitutional right to be born and live. Abortion kills children, scars families, and harms women. We can and must do better.”

Ohio House Minority Leader Emilia Sykes (D) slammed the bill, calling it “an egregious assault on women, a dangerous attack on healthcare rights and an embarrassment for our state,” adding that “Ohio Republicans want to control women, but we won’t be silent.”

“Criminalizing care will disproportionately impact women of color, nonbinary people and those already at a disadvantage in our health and criminal justice system. …Once again, Republicans are showing that the everyday needs of Ohioans are less important than scoring political points, likes and retweets,” Sykes said, according to Cleveland.com.

I wish they hadn’t racialized the bill in this way. I think pro-choice is the right thing to do for everyone, and is not a palliative for racism. It’s like arguing for gun control because guns disproportionately kill people of color. Anyway, if Roe v. Wade is overturned by the Supreme Court, which is at this moment adjudicating the Texas bill, regulation of abortion will be thrown back to the states, and this kind of thing will be passed in many states.  I’m pretty sure that the Supremes won’t allow the “vigilante enforcement” procedure to stand, but without Roe v. Wade Ohio’s bill won’t need it.

You can read the ten-page bill by clicking on its first page below: 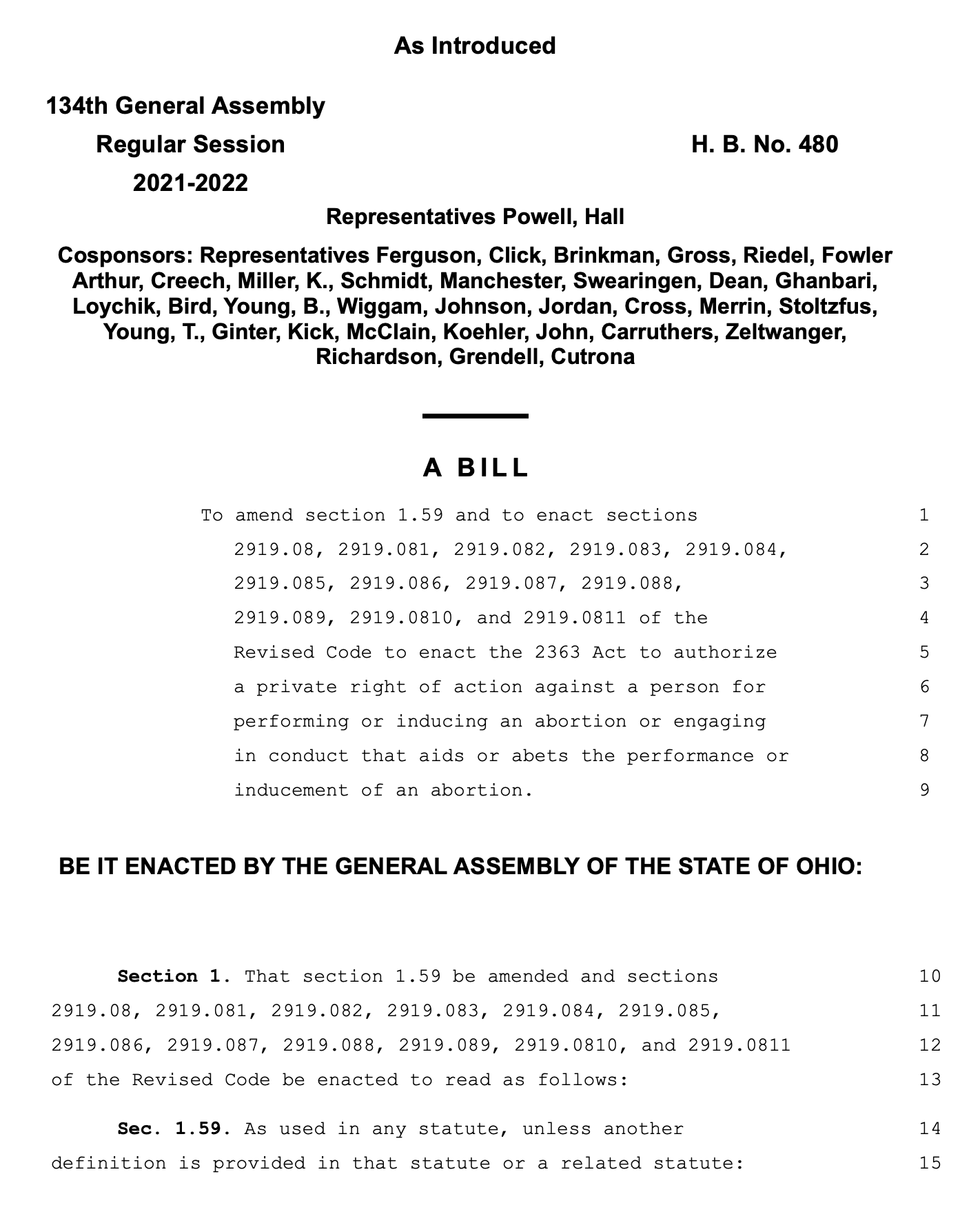 Here’s the heartbeat of the bill; note the cribbing from the Declaration of Independence: 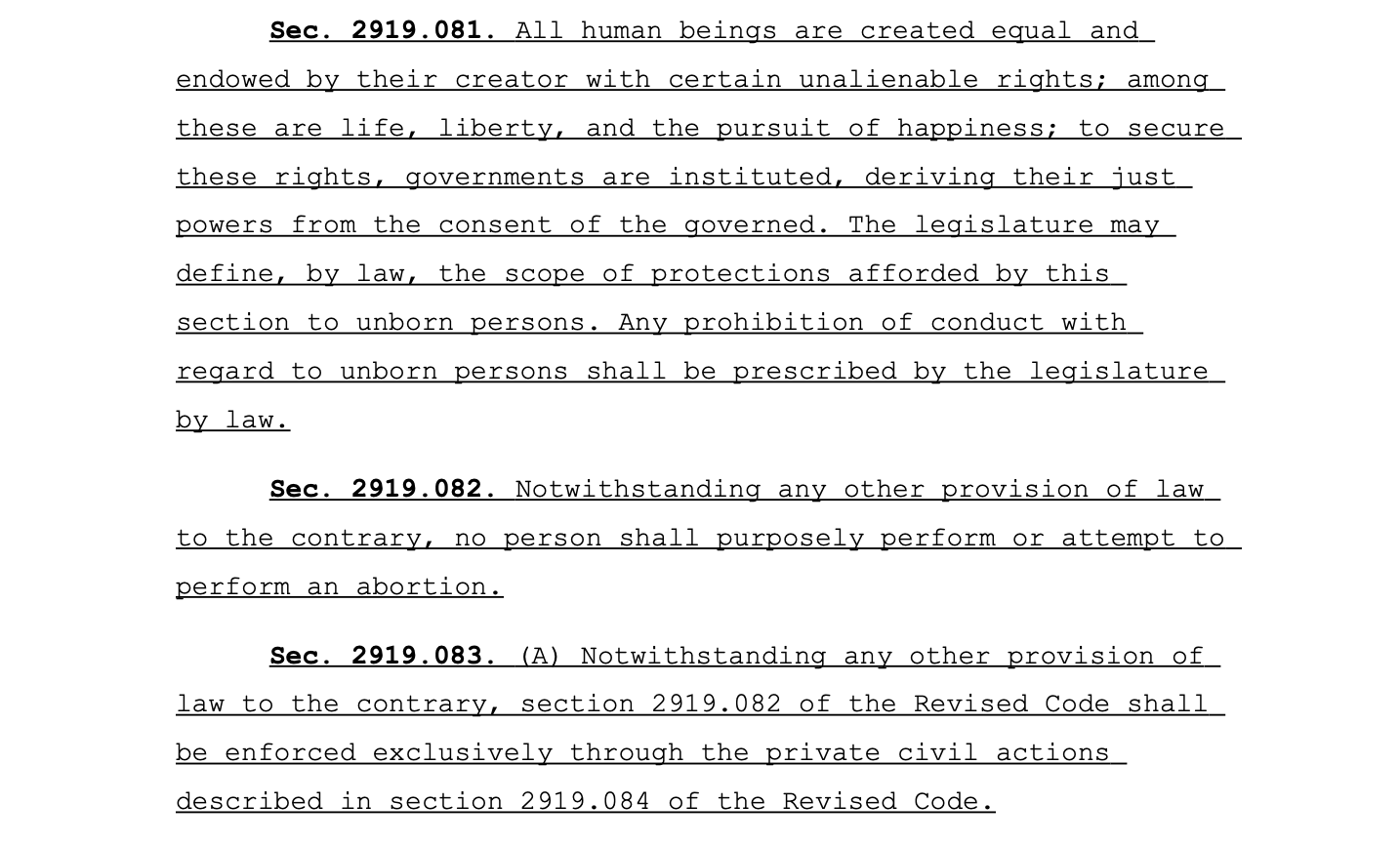 And you have four years to bring suit and get your $10,000 reward for incriminating people. Note that the woman who has the abortion herself cannot be sued; it’s an attempt to stop abortion by intimidating abortion providers.

Since the Ohio legislature is majority Republican, and the governor is also Republican, things don’t look good.

27 thoughts on “Ohio introduces an antiabortion bill similar to that of Texas, but worse: it bans all abortions”