Yes, you know by now that the statue of Thomas Jefferson that used to stand in the council chamber of New York’s City Hall has been removed, for Jefferson enslaved many other humans. No matter that his statue depicted him a writer, probably of the Declaration of Independence; his possession of slaves (around 600 of them!) was sufficient to warrant his cancellation.

The statue was scheduled to be moved to the New York Historical Society, but now its fate is uncertain. The New York Times reports that some assemblymen want it destroyed, as other Jefferson statues have been:

Some public speakers argued that the statue should remain in the Council chambers, suggesting that its placement there could facilitate the debate over his legacy.

Assemblyman Charles Barron, the former councilman who tried to get the statue removed in 2001, vehemently disagreed.

Yes, that is erasure. A bit more:

According to experts who track monuments, several other Jefferson statues have been removed or destroyed over the last year, including ones in Georgia and Oregon. Last year, Lucian K. Truscott IV, a direct descendant of Jefferson, wrote in The New York Times that the Jefferson Memorial in Washington should be replaced by a monument of the abolitionist Harriet Tubman.

I warned you that the Jefferson Memorial, a large and lovely building on Washington’s Tidal Basis, is ripe for removal.

Now the writer Lionel Shriver has weighed in at the Times of London (she’s American but lives in London). You remember Shriver from these pages when she created a ruckus at the Brisbane Writers Festival by defending both cultural and literary appropriation, causing one Guardian writer to walk out of her talk. Since then she’s been an anti-woke activist, and though I don’t always agree with her, there’s no doubt that she has guts (see my other posts on Shriver here).  And guts is what she displays in her op-ed decrying the removal of Jefferson’s statue from New York’s City Hall.

You won’t be able to read more than a few lines by clicking below, as the piece is paywalled, but judicious inquiry will yield you a copy. 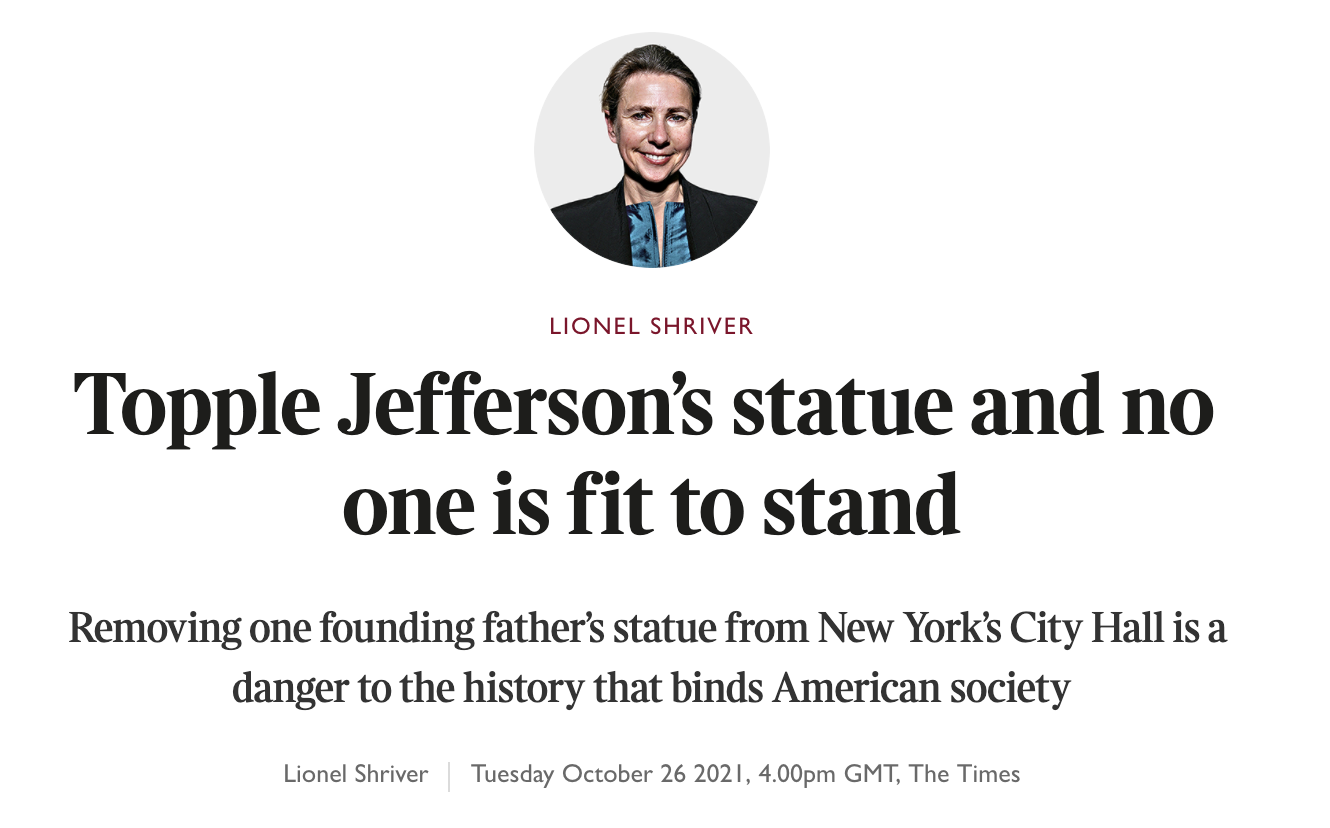 There are a few points that I consider a bit snarky in tone, but they are worth discussing. One is how far we take erasure or cancellation based on association with slavery.

Yet if involvement in slavery cancels out all positive contributions to American history, the US will be obliged to throw loads of its public statuary on the scrapheap. Multiple American founders owned slaves, such as James Madison, James Monroe, Benjamin Franklin and George Washington. Alexander Hamilton married into a big slave-owning family.

Expunging these seminal figures from America’s cultural landscape would mean closing the major tourist attraction of Jefferson’s home, Monticello in Charlottesville, Virginia, and ploughing under the imposing Jefferson memorial in DC. Obviously, we’d have to bomb Mount Rushmore. We’d need to topple the Washington Monument, rename the federal capital, and rechristen Seattle’s state. Madison, Wisconsin, would need rebranding, likewise the plentiful towns called Jefferson, in Maine, New Hampshire, North and South Carolina, New York, Colorado, Wisconsin and Massachusetts. Road and building names such as “Franklin Street” and “Monroe House” across the nation would have to go.

Already hastily revised during the Black Lives Matter mania, even the famously multiracial Hamilton would close on Broadway. All $1, $10, and $100 notes would have to be recalled and redesigned with new faces. As it is now fashionable to smear even Abraham Lincoln, author of the Emancipation Proclamation, as a racist, let’s throw in the $5 notes as well. And wouldn’t repudiation of the founding fathers mean repudiating the American constitution itself, which these wicked men wrote?

People have been cancelled for being associate with the slave trade in only oblique ways, but George Washington actually owned slaves, as did eleven other U.S. Presidents. Ownership of another human being and making them work for you for free is reprehensible, and that ownership is doubtlessly more odious than Hamilton marrying into a slave-owning family. So surely George Washington’s statues (and those of Madison, Monroe, and so on) would have to go. I will leave that up to the people who police these kinds of things.

What concerns me more is the ineffectiveness and performative nature of these statue-topplings, and Shriver doesn’t miss that:

More germane than the practical difficulties of erasing tainted foundational luminaries is what such a puristic undertaking would achieve. I propose, in tangible terms: nothing. The removal of that Jefferson statue won’t palpably improve the lives of ordinary New Yorkers one whit. The left’s current obsession with symbolism, language and statuary, is sophomoric. It’s moral busywork in a world hardly devoid of real problems. Think Sadiq Khan doling out grants of £25,000 per locality to cover the cost of “decolonising” London street names — after which, who will be better off? That million-quid fund would be better spent on neighbourhood keg parties.

When successful, these ethically decorative initiatives only incentivise more of the same. Having won the vote on the Jefferson statue, none of those caucus members is sitting back thinking, “Good! Now we have a just society. Maybe I’ll retire.” What really drives these renaming and statue-toppling campaigns is a desire to exercise power. But as soon as the crack-high of getting what they want subsides, activists do what any addict would do: they hunt for more crack. So in New York that Jefferson statue could be just the start, while Google Maps may have a fiendish time keeping up with replacing all the “Colston Avenues” in London.

Too few people seem to realize that a lot of this activity is not designed to improve racial relations, but to show power. I can understand why repressed groups want to exert some power to change society, but I don’t agree that erasure or cancellation (in most but not all cases) is the way to do it.  You can already see fairly un-guilty figures, whose lives were a net good, being swept into the cancellation mania, because empowerment breeds, well, more power. If you want an example, try Gandhi.

In the end, Shriver appeals to nuance; people are complex, adhere to the mores of their time (how many white critics of slavery would have themselves approved the practice had they lived in the early nineteenth century?), and perhaps we can see both the good and bad sides of people at once: a concept unique to Woke Cancellers. Shriver ends with this:

Past notables are bound to fail the political litmus test of the present: they didn’t recycle their mead containers or support trans rights in 1704. And never mind our changing social mores. Given the dodgy nature of the species, if we pay tribute only to perfect people, we pay tribute to no one. Icons of the past were also real, complicated personalities. A fuller understanding of their flaws and inconsistencies makes history richer and more pertinent to the present.

The man who wrote “all men are created equal” in the Declaration of Independence also helped to draft a constitution in which a slave counted as three-fifths of a human being. Jefferson’s hypocrisy is a reminder to look for similar hypocrisy in our own time. For example, the very parties who pushed to remove that Jefferson statue because it’s hurtful to black people are at once some of the least concerned that the murder rate in the city, largely of black New Yorkers by black New Yorkers, has risen nearly 50 per cent since 2020. [JAC: This last comment I consider largely irrelevant and not supportive of Shriver’s point.]

Trevor Phillips has drafted guidelines to protect British heritage from “temporary shifts in public sentiment”, such as the sustained racial hysteria after George Floyd’s murder. As one government source noted of Phillips’s charter, “Too many institutions are rushing to please a vocal minority.” Most Britons don’t want the larger-than-lifes they studied in school — Churchill, Nelson, Disraeli — banished from public squares. Fine, let’s all perceive the profound shortcomings of historical personages with greater clarity. But to see a man more clearly, you put on your glasses. You don’t throw him in the river.

Non-Americans who weren’t raised to revere a cast of characters from the country’s fledgling years may not realise how dumbfounding it is that we’re now removing statues of the abruptly-loathsome Jefferson. National mythologies help maintain the social fabric, which is alarmingly easy to unravel. Jefferson may embody “the most shameful parts” of my country’s history, but also the best. In moral value, all men are indeed created equal. Jefferson laid the groundwork for later generations to better realise that revelation.

93 thoughts on “Lionel Shriver decries the demonization of Thomas Jefferson”