We all know who the cowards are, though they’re not branded as such by the Left. They include entire universities and their presidents, like Evergreen State, Oberlin, Yale, and Bryn Mawr. They include Dean Baquet, the editor of the New York Times, and other media like New York Magazine and the New Yorker, who always take the safe stands on every issue, never challenging our thoughts. They include the Dean and head of the EAPS department at MIT, who disinvited Dorian Abbot from a prestigious lecture at MIT.  They are all the people who bow to unreasonable demands, or accept lies, or refuse to question dogma—all out of fear for their careers. And they are many.

In her Commentary article this week (also highlighted on her website in a short piece called “Some thoughts about courage“), Bari Weiss first defines wokeness (the bad kind) and then recites many instances of people who have had their lives or careers damaged by cowards. She recounts tales of those who have fought back. You already know many of these stories. Click on the screenshot below to read. Weiss introduces her piece this way on her Substack site:

If you read this newsletter — and if you are new here, welcome! — you are by now quite familiar with the features of the great unraveling. The politicization of everything. The re-racialization of everyone. The demonization of those with a different perspective. The forced conformity. The ideological capture of our schools. The betrayal of liberalism by the institutions meant to uphold it. The denial of obvious truths by our most trusted experts. The replacement of forgiveness and mercy with perpetual punishment.

How did this happen?

Here’s what I write in Commentary: 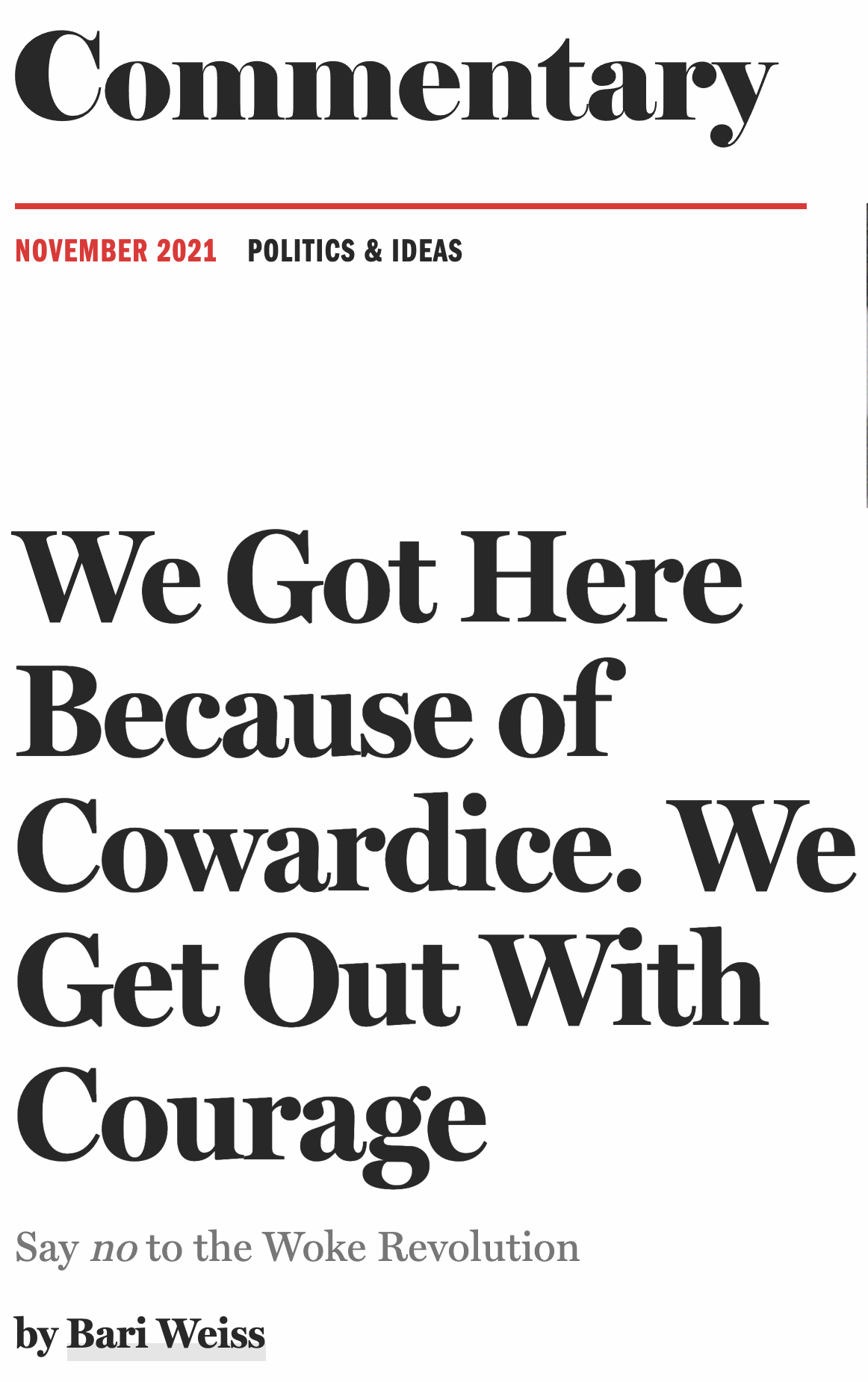 The message is simple: when you run up against irrational wokeness, as in the examples she gives, have some moxie, cojones, guts, chutzpah, or whatever you call it, because standing up against this stuff is the only way to quash it. However, given that most people are fearful of being called racists, or being ruined, by opposing insanity, more than half of students are afraid to speak their minds in such situations. The only way that will change is when there are examples like Andrew Sullivan, Matt Taibbi, Bari Weiss, or other people who, though liberal, are not swept up in the tide of ultra-wokeness.

This is the same way atheism began to spread: a few people like Sam Harris and Richard Dawkins and Christopher Hitchens spoke out (granted, only Harris had something to lose), and then smaller fish like me, heartened, wrote books and gave talks on the perniciousness of religion. Many times I’ve heard that reading this site, or hearing my talks, have given people the courage to “come out” and leave their faith. Wokeness, too, is a faith, and will be dispelled the same way—one example of “coming out” after another.

I don’t really have to say more. I’ll just give one of Weiss’s examples of courage—one I didn’t know of—and her conclusion:

Gordon Klein, a professor at UCLA, recently filed suit against his own university. Why? A student asked him to grade black students with “greater leniency.” He refused, given that such a racial preference would violate UCLA’s anti-discrimination policies (and maybe even the law). But the people in charge of UCLA’s Anderson School launched a racial-discrimination complaint into him. They denounced him, banned him from campus, appointed a monitor to look at his emails, and suspended him. He eventually was reinstated—because he had done absolutely nothing wrong—but not before his reputation and career were severely damaged. “I don’t want to see anyone else’s life destroyed as they attempted to do to me,” Klein told me. “Few have the intestinal fortitude to fight cancel culture. I do. This is about sending a message to every petty tyrant out there.”

There are other examples of people who have fought back, brought lawsuits, or (like Peter Boghossian) quit rather than tender fulsome apologies to save their skins. It’s a long article, and I think it’s worth reading even though the message may not be novel.

But let’s start with a little courage.

Courage means, first off, the unqualified rejection of lies. Do not speak untruths, either about yourself or anyone else, no matter the comfort offered by the mob. And do not genially accept the lies told to you. If possible, be vocal in rejecting claims you know to be false. Courage can be contagious, and your example may serve as a means of transmission.

When you’re told that traits such as industriousness and punctuality are the legacy of white supremacy, don’t hesitate to reject it. When you’re told that statues of figures such as Abraham Lincoln and Frederick Douglass are offensive, explain that they are national heroes. When you’re told that “nothing has changed” in this country for minorities, don’t dishonor the memory of civil-rights pioneers by agreeing. And when you’re told that America was founded in order to perpetuate slavery, don’t take part in rewriting the country’s history. [JAC: This of course is a slap at the NYT’s 1619 Project.]

America is imperfect. I always knew it, as we all do—and the past few years have rocked my faith like no others in my lifetime. But America and we Americans are far from irredeemable. . . .

. . . Every day I hear from people who are living in fear in the freest society humankind has ever known. Dissidents in a democracy, practicing doublespeak. That is what is happening right now. What happens five, 10, 20 years from now if we don’t speak up and defend the ideas that have made all of our lives possible?

You have to number Weiss among the courageous ones. After all, she walked away from the biggest plum in journalism: a column in the New York Times. Granted, she was harassed by her colleagues, but she was not fired. But she’d rather say what she sees as true without having Dean Baquet breathing down her back or her colleagues demonize her for wrongthink.

22 thoughts on “Bari Weiss on the need for moxie”