I still haven’t seen Dave Chappelle’s Netflix special “The Closer“, so I can’t weigh in on whether what he said was in horrible taste or not. Those of you who did see it can (and should) weigh in below. As you know, given that it dealt with transsexual issues, it caused an uproar, much of it is already reported on Wikipedia. The unusual thing is that a big and lucrative corporation is standing firm against a social-media onslaught.

All I can say about Chappelle is that I’ve seen some of his other shows, or parts of him, and see him as a latter-day Lenny Bruce, who deals frankly with topics about which people have strong feelings. And I think he’s funny and provocative as hell.

But I will neither defend nor attack him about this issue till I see the show. I’ll just reprise the reaction given by the New York Times, which reports that the company is melting down internally after presenting Chappelle’s show. Chappelle allegedly made comments that were “transphobic”.  Both co-executives of Neflix, however, are defending both the show and Chappelle. 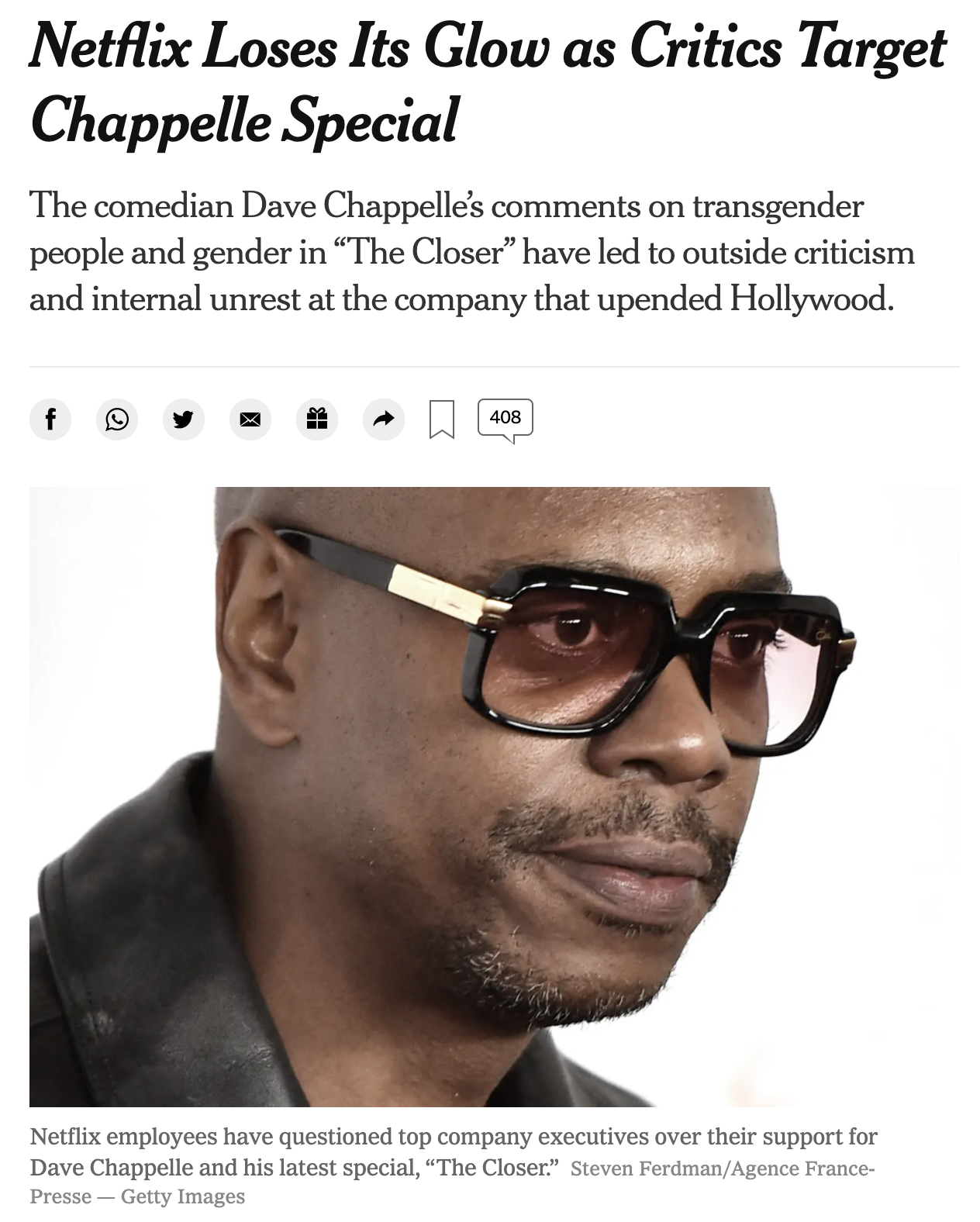 The accusations (all indented material are from the NYT piece):

That’s all changed. Internally, the tech company that revolutionized Hollywood is now in an uproar as employees challenge the executives responsible for its success and accuse the streaming service of facilitating the spread of hate speech and perhaps inciting violence.

At the center of the unrest is “The Closer,” the much-anticipated special from the Emmy-winning comedian Dave Chappelle, which debuted on Oct. 5 and was the fourth-most-watched program on Netflix in the United States on Thursday. In the show, Mr. Chappelle comments mockingly on transgender people and aligns himself with the author J.K. Rowling as “Team TERF,” an acronym for trans-exclusionary radical feminist, a term used for a group of people who argue that a transgender woman’s biological sex determines her gender and can’t be changed.

“The Closer” has thrust Netflix into difficult cultural debates, generating the kind of critical news coverage that usually attends Facebook and Google.

Several organizations, including GLAAD, the organization that monitors the news media and entertainment companies for bias against the L.G.B.T.Q. community, have criticized the special as transphobic. Some on Netflix’s staff have argued that it could incite harm against trans people. This week, the company briefly suspended three employees who attended a virtual meeting of executives without permission, and a contingent of workers has planned a walkout for next week.

. . .Terra Field, a software engineer at Netflix and one of the three employees who were suspended for joining a quarterly meeting of top executives that they were not invited to, said on Twitter last week that the special “attacks the trans community, and the very validity of transness.” (Ms. Field and the other suspended employees have been reinstated.)

Jaclyn Moore, an executive producer for the Netflix series “Dear White People,” said last week that she would not work with Netflix “as long as they continue to put out and profit from blatantly and dangerously transphobic content.”

On Wednesday, GLAAD criticized Mr. Sarandos’s claim that on-screen content does not lead to real-world violence. “Film and TV have also been filled with stereotypes and misinformation about us for decades, leading to real-world harm, especially for trans people and L.G.B.T.Q. people of color,” the organization said in a statement.

The critical reaction to “The Closer” has been mixed, with most reviewers acknowledging Mr. Chappelle’s comedic skills while questioning whether his desire to push back against his detractors has led him to adopt rhetorical tactics favored by internet trolls. Roxane Gay, in a Times opinion column, noted “five or six lucid moments of brilliance” in a special that includes “a joyless tirade of incoherent and seething rage, misogyny, homophobia and transphobia.”

I looked up the ratings of the show on Rotten Tomatoes, and here they are. This is one of the biggest disparities I’ve ever seen between critics’ reviews and the public’s reviews.  Clearly, the media is much more on the “transphobe” side than is the public:

The defense. Surprisingly, given its dominance of the media, both of the company’s chief executives mounted a robust defense, though the company didn’t have a comment (nor did Chappelle).

A discussion this week on an internal Netflix message board between Reed Hastings, a co-chief executive, and company employees suggested that the two sides remained far apart on the issue of Mr. Chappelle’s special. A transcript of the wide-ranging online chat, in which Mr. Hastings expressed his views on free speech and argued firmly against the comedian’s detractors, was obtained by The New York Times.

One employee questioned whether Netflix was “making the wrong historical choice around hate speech.” In reply, Mr. Hastings wrote: “To your macro question on being on the right side of history, we will always continue to reflect on the tensions between freedom and safety. I do believe that our commitment to artistic expression and pleasing our members is the right long term choice for Netflix, and that we are on the right side, but only time will tell.”

. . .Replying to an employee who argued that Mr. Chappelle’s words were harmful, Mr. Hastings wrote: “In stand-up comedy, comedians say lots of outrageous things for effect. Some people like the art form, or at least particular comedians, and others do not.

When another employee expressed an opinion that Mr. Chappelle had a history of homophobia and bigotry, Mr. Hastings said he disagreed, and would welcome the comedian back to Netflix.

“We disagree with your characterization and we’ll continue to work with Dave Chappelle in the future,” he said. “We see him as a unique voice, but can understand if you or others never want to watch his show.”

He added, “We do not see Dave Chappelle as harmful, or in need of any offset, which we obviously and respectfully disagree on.”

In a note to employees this week, Ted Sarandos, Netflix’s other co-chief executive, expressed his unwavering support for Mr. Chappelle and struck back at the argument that the comic’s statements could lead to violence.

I’ll try to watch this soon, and the questions I’ll be asking myself are these:

a. Does Chappelle really seem to express transphobia or homophobia?

b. Is the show in bad taste?

c. The show is said to include a memoriam by Chappelle of his late friend Daphne Dorman, a transgender comedian. Others say it was disrespectful. Which was it?

d. Do I think the show is likely to incite violence? (That’s just a guess, of course.)

e. Does this look like it will hurt Netflix?

f.  Do I think that Chappelle is through—permanently cancelled. I doubt it given that Netflix is defending him pretty strongly, and if they keep airing his shows, well, that’s not cancellation.

The topic of transsexual people is perhaps the hottest political button there is for those on the Left. Certainly Netflix and Chappelle had the right under the first amendment to say what they wanted, but of course that right comes with the consequences of what you say. Normally the consequences from what I hear from the critics and opponents would be cancellation, but this is Dave Chappelle, and pushing buttons is his business.

49 thoughts on “Netflix employees and many civilians criticize Dave Chappelle’s “The Closer,” Netflix executives stand by the Chappelle and the show”