All I’m intellectually capable of doing today is summarizing other articles for you. I’d do a lot better with a good night’s sleep.

Anyway, on her Substack site, Bari Weiss interviews Brown University economist and contrarian Glenn Loury. The edited print version is below; I think access is free but you should subscribe if you read often.  Click on the screenshot below to read the interview.

You can also hear the complete 1 hour, 42 minute video here, though I’m not sure you can hear it if you don’t subscribe. I haven’t yet listened to it. 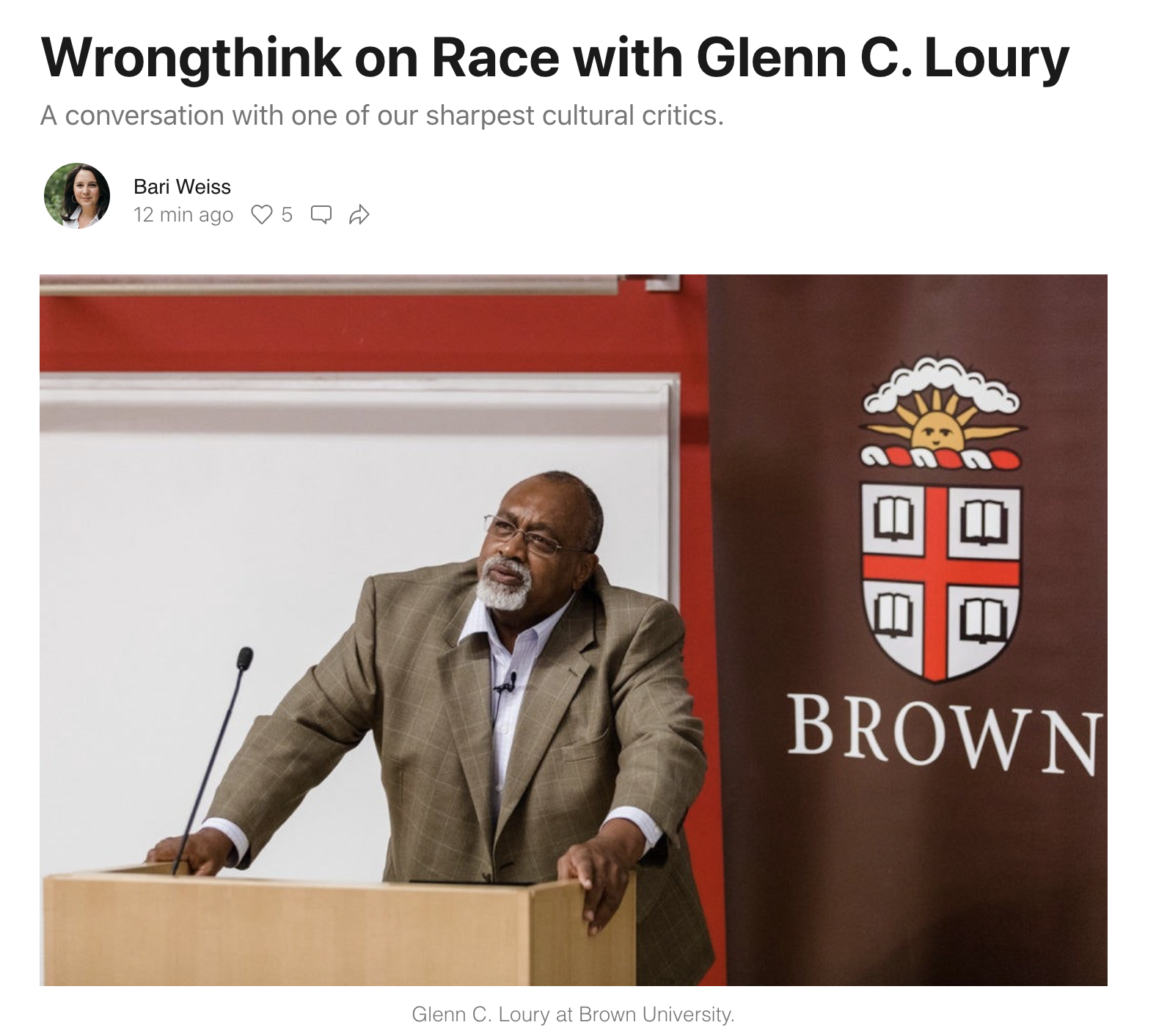 Weiss, who also bucks the tide of wokeness, is a big admirer of Loury, who at one point—though he’s no longer religious—says that religion saved him from addiction problems.

She begins by pointing out a 1984 essay Loury wrote for The New Republic, “A new American dilemma” (see a pdf here), which partly blamed black poverty on black culture itself. When he read excerpts from that essay (which I haven’t read) at a meeting of civil rights leaders, it apparently made Coretta Scott King weep:

BW: Did it feel like you were saying something out loud and in public that many people you knew and probably many people you grew up with believed, but it just wasn’t allowed to be said out loud at a place like Harvard?

GL: I don’t want to get too partisan about it, but I just want to say I don’t think the people around that table who led those organizations were like: “Yeah, I agree with you. That’s the problem. But we can’t say it that way.” I think they were more like: “That’s not how we talk. That’s reactionary talk that gives aid and comfort to the enemy. We expected better of you than that.” That’s why I think Mrs. King was weeping. At the end of the day, I was standing right next to her. We’re only about 20 people in the room. And I’m standing up extemporaneously giving a 20 or 30 minute exposition. And I looked down and there are tears rolling down her cheek. And I think it was a disappointment. You know, I am this wunderkind, I’m 34 years old and I’m a tenured professor of economics at Harvard. I have all that cache. And there I am. That’s my message. That’s what I have to say.

Loury’s criticism of wokeness and his emphasis on education as a way of black empowerment, without lowering standards, resembles that of his friend John McWhorter (they often have discussions on Bloggingheads.tv).  Also similar is Loury’s analogizing wokeness to a religion.

BW: I’d like for you to get specific. [About the decline in academic standards Loury perceives in American education]

GL: The diversity thing is going to be one of the things that I’m going to say. The hostility to American interest in the world is another thing that I could point to. The impatience with the fact that when you transform moral judgments about things like gender identity overnight in a country of 330 million people, where everybody is not going to be on the same page at the same time, and the way you decide to talk about that from some lofty, supercilious, self-righteous, sanctimonious moral posture and to condemn the people who are holding their bibles or holding on to their traditions as if they were know-nothings. That smugness infects the university. But I think the diversity thing is related to the standards thing.

Loury has some harsh things to say about newly appointed MacArthur genius grant recipient Ibram Kendi, but we’ll skip that to where Weiss asks Loury to envision a way for black lives to improve that differs from the program of Black Lives Matter (a movement Loury also disses pretty strongly)

BW: And yet corporations and the entire elite establishment has taken up the cause of Black Lives Matter. And the cynic in me would say it’s just about the cheapest and easiest thing that they could possibly do.

GL: Nothing that Black Lives Matter is about has any intersection with the things that actually matter in black lives. What about education? The gap in the cognitive development of the human potential of African-American youngsters relative to others in this country widens. It’s a yawning chasm.

BW: Glenn, if one really cared about black lives and wanted to insist on a movement that actually fulfilled the promise of black lives mattering, what would be the top three priorities of that movement?

GL: I think self-determination and taking responsibility for our lives. I’d say education. I’m sorry this is partisan, but the public-school unions are poorly serving, on the whole, the places where black students congregate and the intellectual needs of those students. Now, there are other people to be faulted as well. But opening up that system to innovation is absolutely imperative to improving the quality of black life in this country.

And the public safety piece of this narrative, that the police are out to get black people, this contempt for law, the lawlessness of the George Floyd protests, the celebration of that lawlessness, the silence in the face of it. Patriotism. And by that I don’t mean blind loyalty to a flag salute, I mean seeing yourself as an integral part of the American project. This is our country. We don’t stand off from it. There is no United Nations where black claims will be negotiated. We must make our peace with our fellow citizens. That has corollaries: two national anthems is a terrible idea, reparations for slavery is a mistake. It wrongly places the nature of the moral problem. It creates these parties as between which a negotiation and a deal is being cut. There are not two parties here. There’s only one party.

And then he makes a statement which I see as largely true but is rejected by much of the left: that race relations in America have improved markedly in the last eighty years. Of course we have a long way to go—the inequalities in education, wealth, and housing are glaringly obvious—but I suppose I’m also Pinkerian in also emphasizing the progress, as Loury does here, with an interesting take:

I could go down the litany of evidence to the effect that the race-relations situation in America in the 21st century is completely and radically different and improved relative to what it was in the mid 20th century. And I think we have to begin to entertain a possibility, which is that the actual success of American history, the fact that we overcame the warts, is the problem. Because the fact of that success in the face of the continuing failure of a large chunk of black society to get on the escalator of opportunity, which defines this country, is just too much cognitive dissonance for a lot of people to grapple with. It’s the presidency of Barack Hussein Obama. It’s the fact that black women are the mayors of a half dozen big cities that I could name. It’s the fact that there are black billionaires. That Oprah Winfrey is Oprah Winfrey and that LeBron James is LeBron James. It’s the fact that every corporate office has an Ibram X. Kendi-loving executive running it. These are the realities of America. Now, in the face of that, you still got jails overflowing with black people. You’ve still got massive poverty and disparity. People do not know the goal in the 21st century with those facts. So they end up, like infants, throwing tantrums in the corner.