After some squabbling within the Democratic Party, the House approved $1 billion funding for Israel’s “Iron Dome”, designed solely as a defensive measure to protect it from rockets fired from Palestine. To avoid Republican opposition to raising the debt ceiling, the Dems had to break this out as a separate bill. (Iron Dome funding has been going on for some years.)

There were 420 votes to fund, but nine dissenting votes on the bill—8 Democrats and one Republican—while two members voted “present”. Three of the “no” votes were “squad members” Rashida Tlaib, Ayanna Presley, and Ilhan Omar, while, as usual, Alexandria Ocasio-Cortez waffled, as she was set to vote “no” as well, but then waffled at the last minute and voted “present” because she cannot bring herself to come out as anti-Israel along with her fellow “progressives”. Rumor has it that AOC wants to challenge Chuck Schumer for his New York Senate seat, and she won’t win in New York if she’s gets a reputation as anti-Israel. As the NYT reports:

Minutes before the vote closed, Ms. Ocasio-Cortez tearfully huddled with her allies before switching her vote to “present.” The tableau underscored how wrenching the vote was for even outspoken progressives, who have been caught between their principles and the still powerful pro-Israel voices in their party. (A spokesman for Ms. Ocasio-Cortez declined to comment on her change of position.)

The Times’s original story, however, included the last underlined phrase below, couching the vote as a battle between the “principles” of the progressives and the “power” of “influential lobbyists and rabbis”. (The original version of the NYT is archived here.) I guess the paper realized this might not exactly be “objective” reporting since perhaps some of those Democrats who voted to support the bill might have principles, too. One person who clearly doesn’t, though, is the dissimulating and ambitious Ocasio-Cortez, forced to tears by her cognitive dissonance. 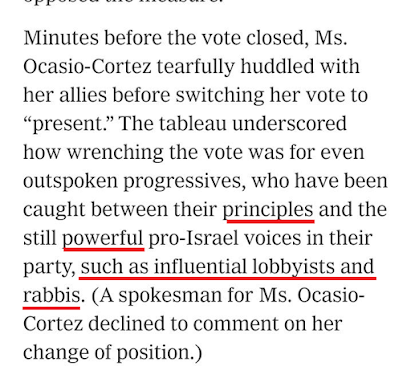 Here’s the only place I found the House members who voted “no”. The other “not present” is Georgia Representative Hank Johnson.

The vote now goes to the Senate, which will pass the bill.