When I was a kid in Virginia, I knew where there was a pawpaw tree in the woods, and at the right time of year I’d gather the ripe ones and gorge myself. They are superb: the American equivalent of mangos.  Here’s a post from reader Leo Glenn about the American pawpaw and its fruit.  They’re not much grown commercially, as far as I know, so try to find a wild tree—or plant one yourself, as Leo did.

Leo’s captions are indented and you can enlarge his photos by clicking on them.

In heeding your call for more wildlife photos, I thought I would offer something a little different. The photos themselves are no great shakes, but hopefully the subject matter will be informative and of interest to your readers. After acquiring our house and property in western Pennsylvania 15 years ago, we began to look for interesting and unusual native trees and shrubs to plant, particularly ones which provide food and/or wildlife habitat. I’ve had a keen interest since childhood in edible and medicinal wild plants, so I was very surprised to learn of a native tree that I had not heard of before, apart from a vague memory of a childhood song. The Pawpaw tree (Asimina triloba) is indigenous to the eastern United States and Canada, and its fruit is the largest native tree fruit in North America. It’s also the only species in its family (Annonaceae) that is not tropical. It’s related to the custard apple (Annona reticulata), soursop (A. muricata), and the cherimoya (A. cherimola).

We have been growing pawpaws now for over 12 years, and have around 20 trees, eight of which are bearing fruit. We also discovered a wild patch along a river bank about a half-hour drive from our home.

Here is a map of the pawpaw’s native range, including some of the Native American names for it. Prior to the ice ages, the species was propagated by megafauna, which ate the fruit and distributed the large seeds. After the extinction of the megafauna and the introduction of Homo sapiens, the fruit was widely eaten and propagated by Native Americans. Thomas Jefferson grew them at Monticello, and they were supposedly one of George Washington’s favorite desserts. Lewis and Clark survived on them during part of their travels, and Mark Twain extolled their virtues. At some point, however, they were all but forgotten. 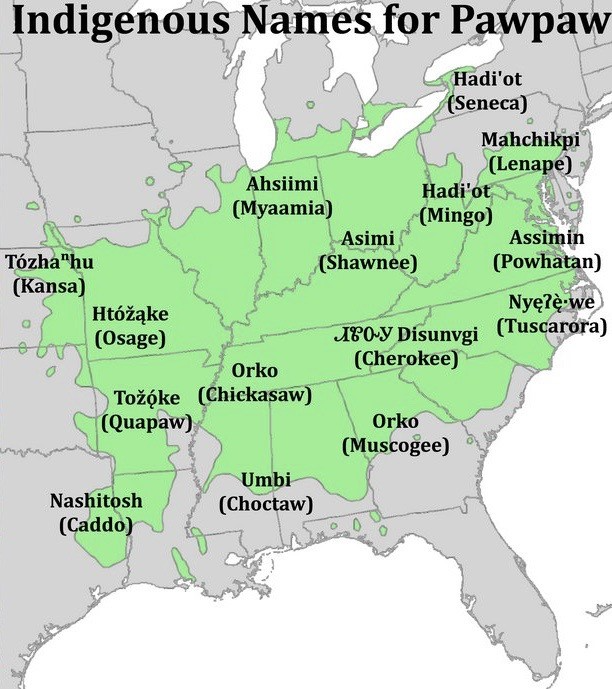 Pawpaws are understory trees that form clonal patches, which may partly explain their scarcity in Pennsylvania, as the majority of woodland was clearcut here by the early 1900s. The only remaining wild patches here tend to be along river banks. They are more common in Ohio, Michigan, Indiana, and elsewhere in their native range, where they are sometimes called “Prairie Banana.” Here is a pawpaw tree, surrounded by its clonal “children.” 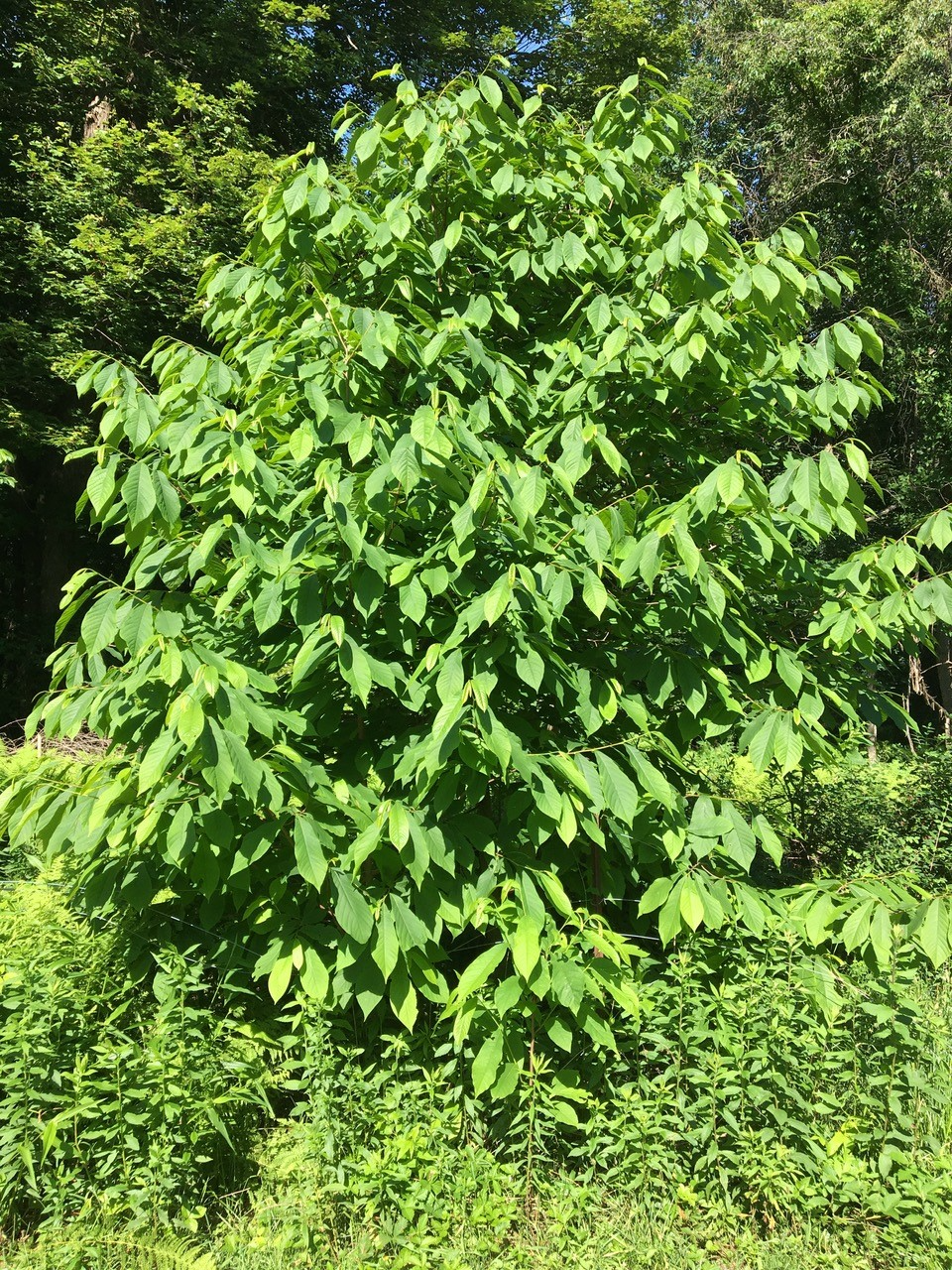 Pawpaw blossoms are perfect, containing both male and female parts, but are protogynous—the stigma matures before the pollen—generally requiring two genetically different trees for pollination (though some self-fertile trees have been found). This is why many clonal patches often produce little or no fruit. The blossoms are pollinated primarily by flies and beetles, have a fleshy color and a slightly fetid odor. Some pawpaw growers hang animal carcasses on the trees to attract pollinators, a practice I have not been tempted to try. 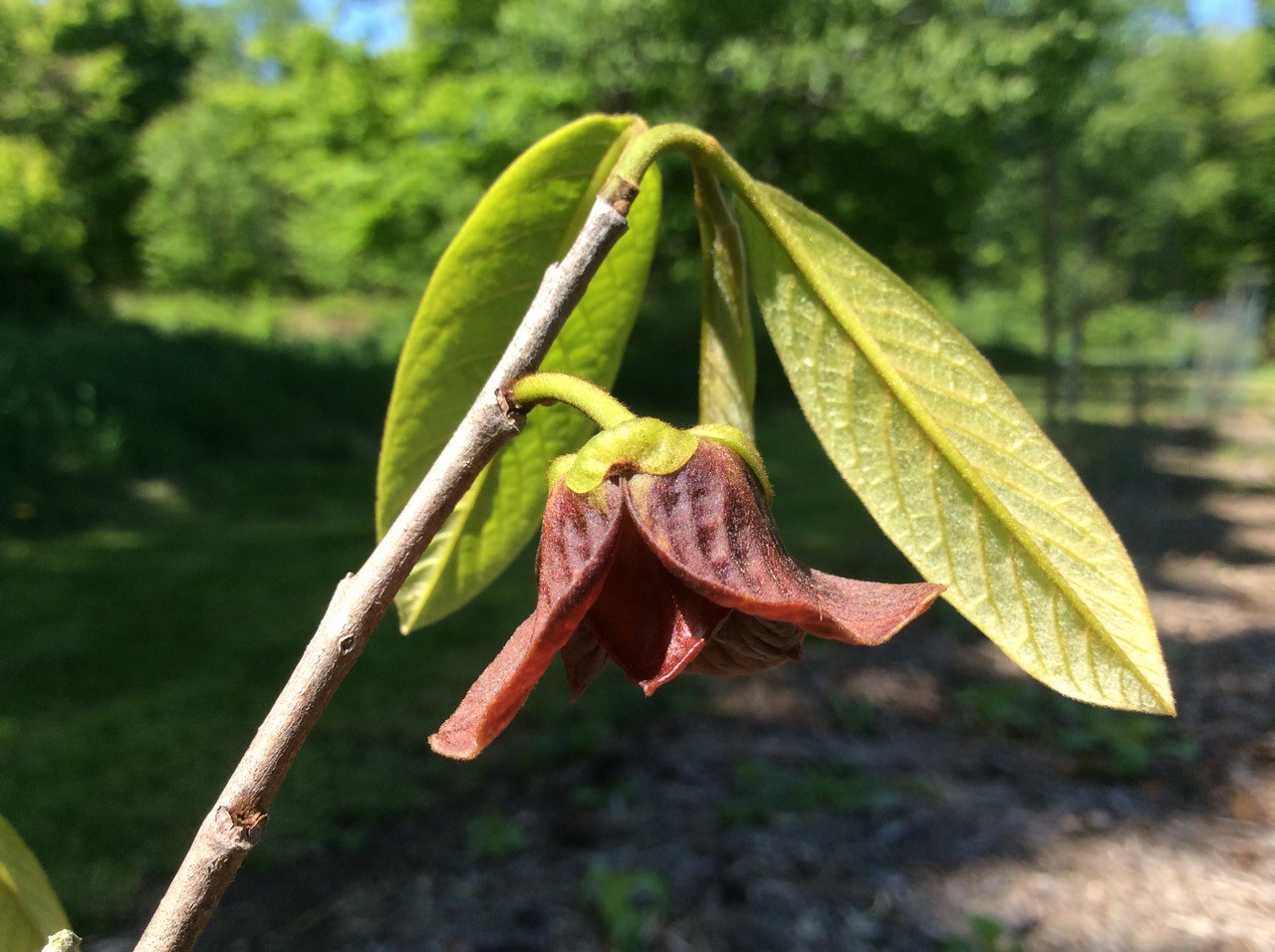 Pawpaws are often compared to bananas, partly because of the flavor and the fact that they are highly perishable, but also because of the manner in which the fruit grows. 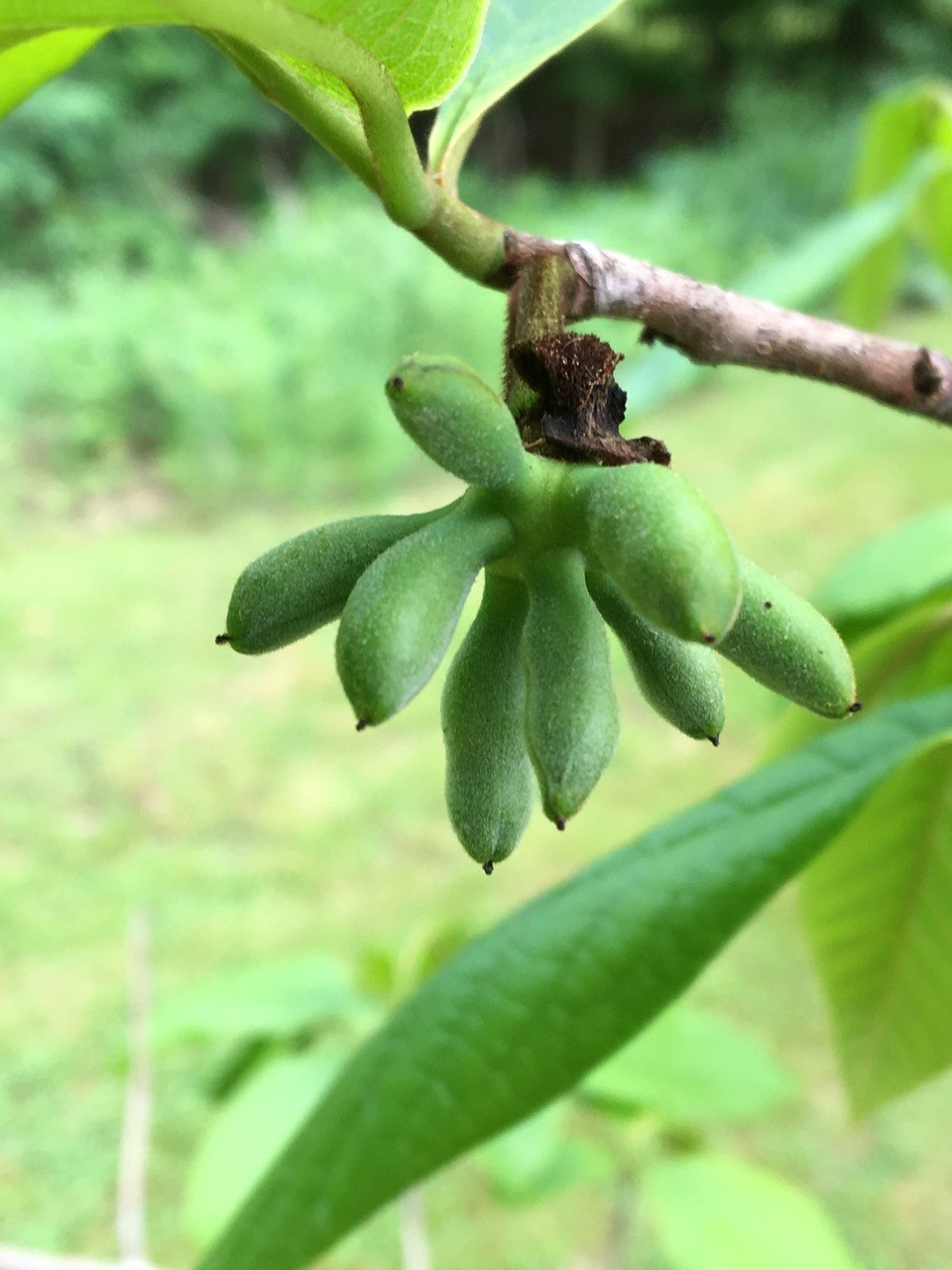 Pawpaws growing in a wild patch along the Allegheny River. 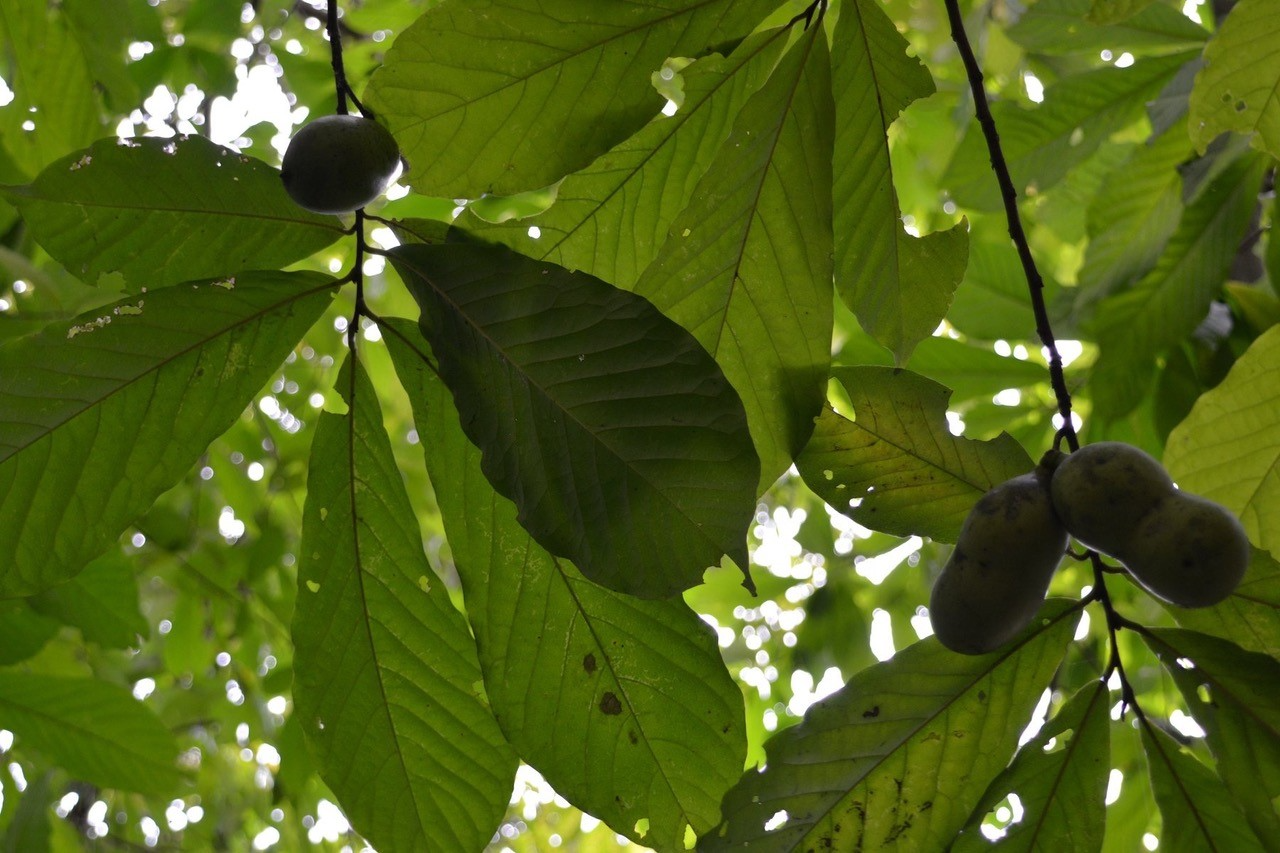 Some of our pawpaws: 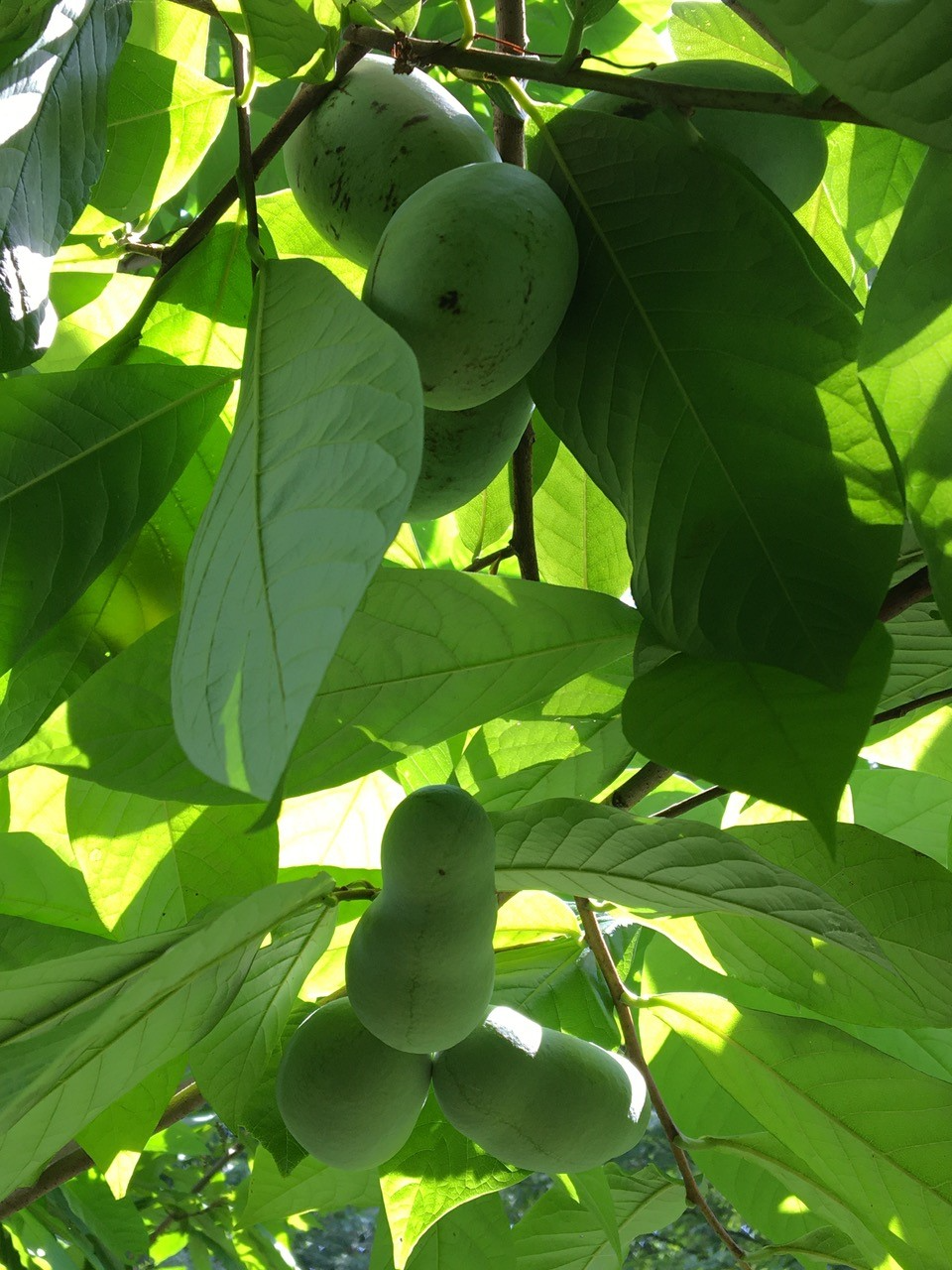 Pawpaws have few insect pests (the bark and leaves contain annonacin, a natural pesticide), though they are the exclusive larval hosts for the Zebra Swallowtail butterfly (Protographium marcellus). I have yet to find one on any of our trees or at the one wild patch I know of, so sadly I cannot offer a photo. I did notice some signs of caterpillar damage on the leaves, but was unable to discover the culprit, until I ventured out at night with a headlamp and caught this fellow, a Tulip-Tree Beauty caterpillar (Epimecis hortaria), happily munching away. 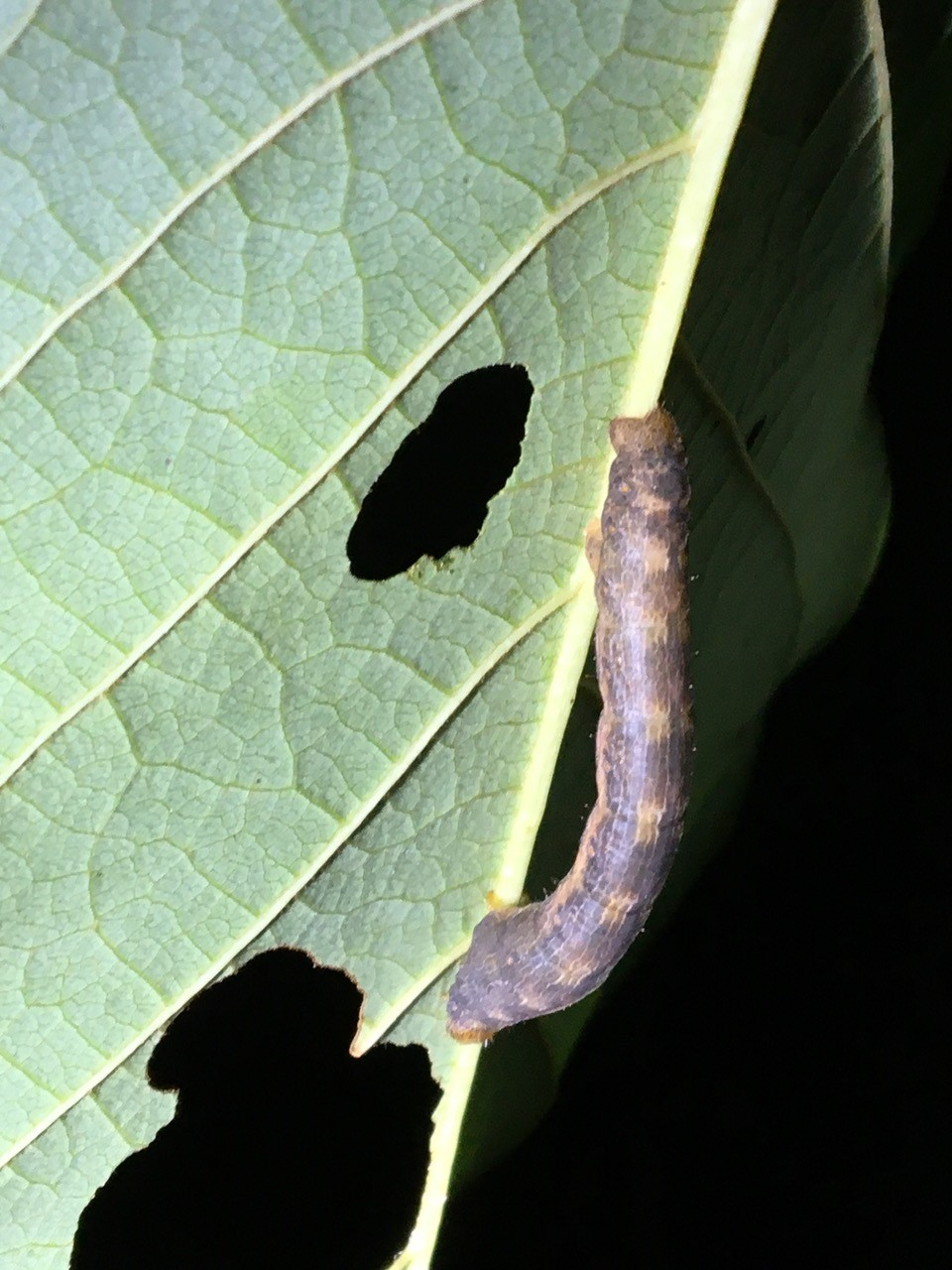 Pawpaws ripen in late August and September in the warmer parts of their range, but here in northwestern Pennsylvania, we have to wait until early October, and keep our fingers crossed that we don’t get an early hard frost. They can be picked when the surface gives slightly to the touch and they begin to emit a sweet aroma. 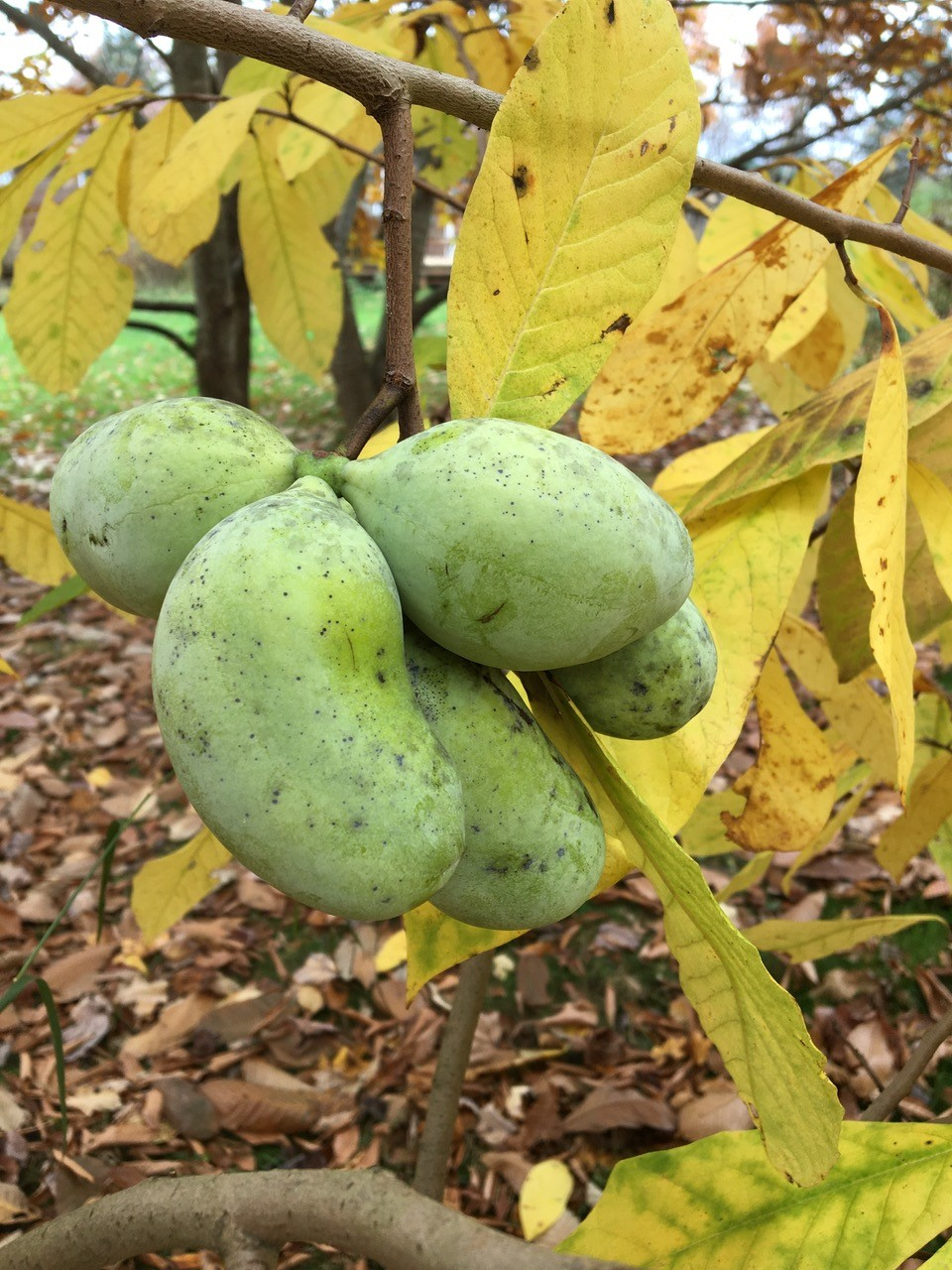 The flesh of pawpaw fruit varies in color, from a pale, cream color to bright yellow-orange, and has a rich, custard-like consistency, often described as a vanilla or banana custard, though it can have hints of mango, cantaloupe, and other flavors. Some find it too cloying, but my family and I consider it to be one of the most exquisite fruits we have ever tasted. Unfortunately, it is highly perishable and, like bananas and avocados, can go from under-ripe to perfect to over-ripe in the blink of an eye. This has presented formidable challenges to the efforts of some people to commercialize the fruit. Interest in the fruit has been building, however. You can find them at some farmers markets, and there are small-scale pawpaw growers in parts of the U.S., Europe, and Asia. 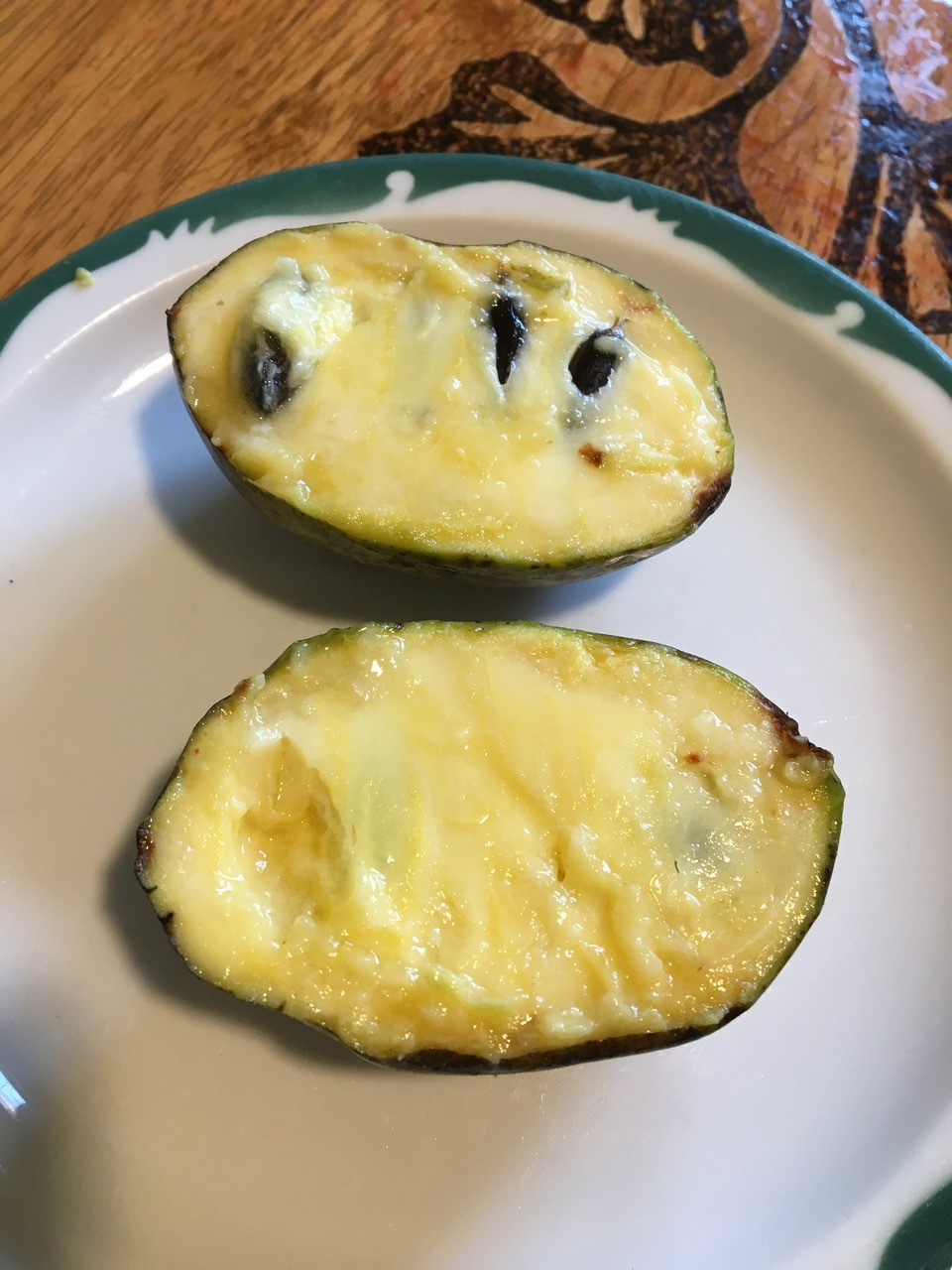 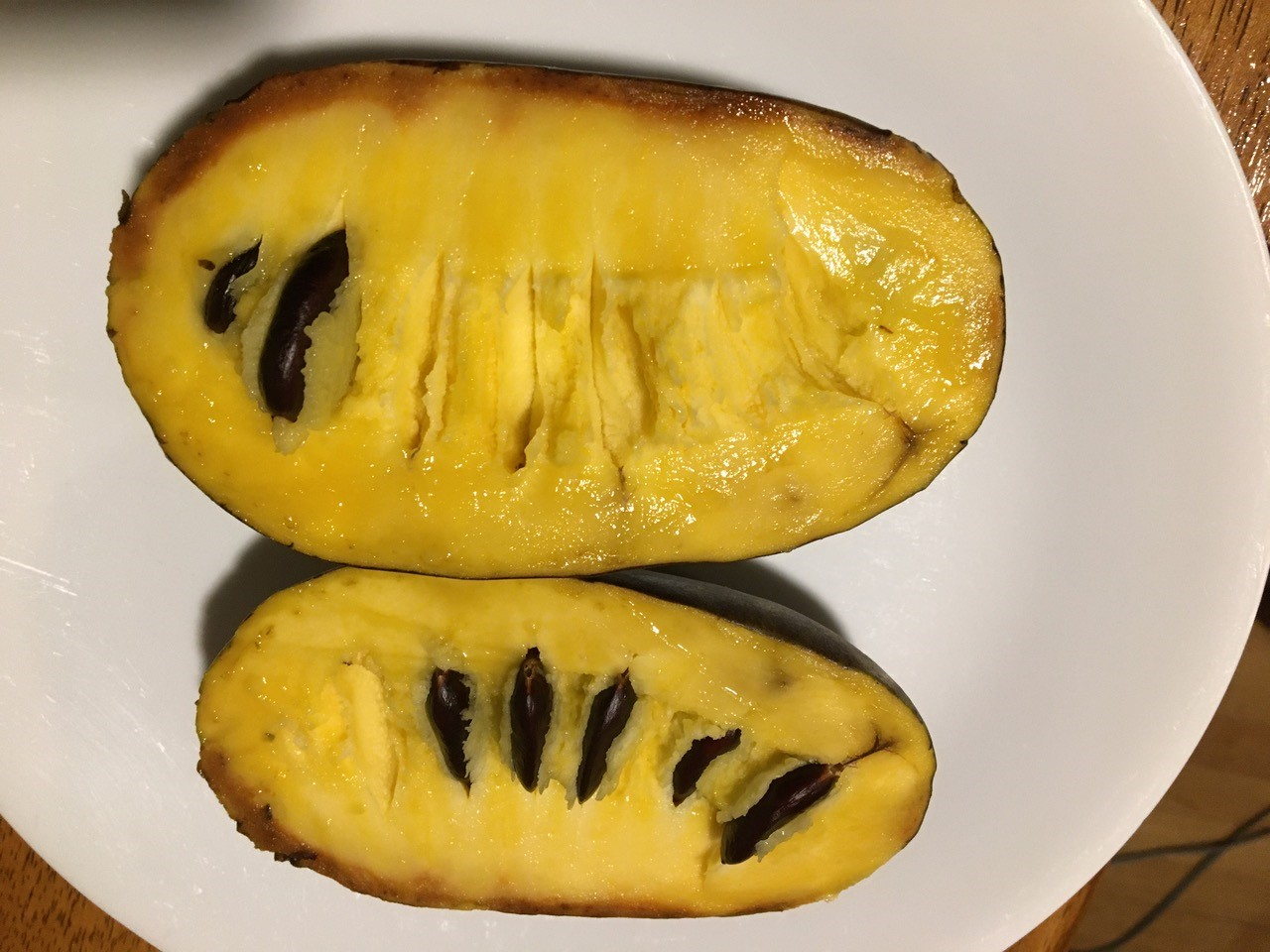 For those seeking additional information about this remarkable native species, I recommend looking up R. Neal Peterson (petersonpawpaws.com). As a plant geneticist in the 1970s, he came across some pawpaw trees, tasted one of the fruits, and had an epiphany. He has since devoted his career to studying the species and promoting it as a commercial crop. He is almost single-handedly responsible for the revival of interest in the fruit and has developed a number of exquisite cultivars. I had the great pleasure of meeting him, and he very kindly and patiently endured my many questions. A good book to read is Pawpaw: In Search of America’s Forgotten Fruit, by Andrew Moore. There are a handful of festivals devoted to the pawpaw, but the first and by far the biggest is the Ohio Pawpaw Festival (ohiopawpawfest.com), in Albany, Ohio, which is happening soon (Sept. 17-19). It’s a wonderful mix of educational presentations, live music, and fantastic food, including pawpaw beer. We first attended in 2008 when, after planting a half dozen young pawpaw trees, it occurred to me that it would be a great disappointment if, after waiting for 7-10 years for our trees to bear fruit, we discovered that we hated pawpaws. So we went to the Ohio Pawpaw Festival to try one, and went back every year after that for the next 10 years.