I’ve just taken Andrew Sullivan’s new collection of writings out of the university library; I was surprised that they had it, already bound in library covers, since it came out only a month ago. I haven’t read it yet, as I’m taking it to Boston with me next week as my travel book.

(By the way, I finished Evita: The Real Life of Eva Peron, by Nicholas Fraser and  Marysa Navarro, and recommend it very highly. It’s a biography embedded in a political history, and her life is so fascinating and ambiguous that, by the end, you don’t know whether to love her, despise her, or, like me, have both feelings at once. But you must learn about her, as she played—and continues to play—a substantial role in the history and politics of Argentina.)

But I digress. The main part of Andrew’s column this week (click on screenshot) is his optimistic analysis that Wokeness may be on the wane. He sees at least eight signs of this, which I’ll list (he doesn’t enumerate them), and though I’m not as optimistic as he, I’ve already posted on this website about several of these. At least we can say that some pushback against Wokeness is emerging. 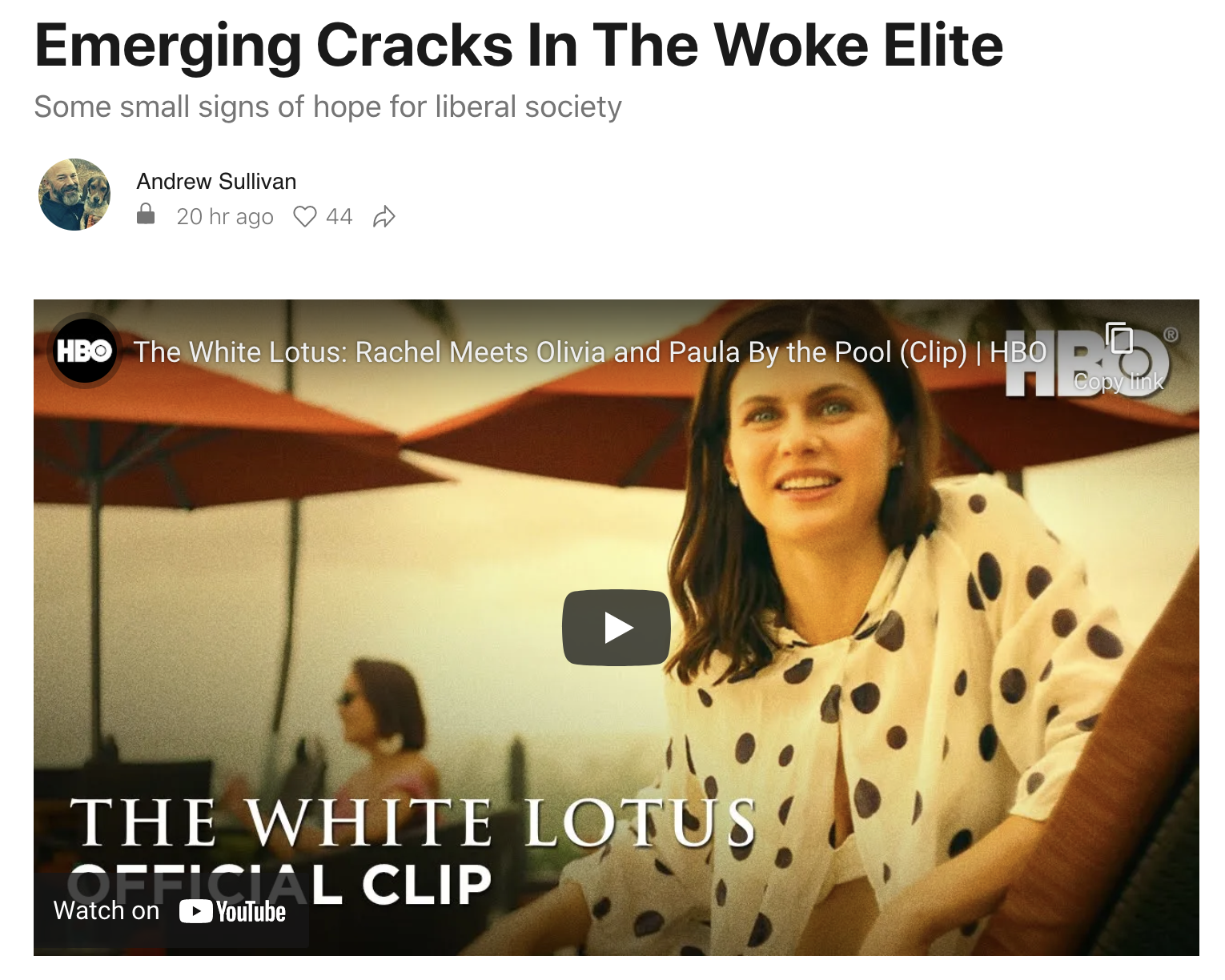 Here are Sullivan’s eight incidents that he sees as the beginning of the Decline and Fall of American Wokeness.

1.) The new The White Lotus HBO miniseries on t.v. (The scene he discusses is here on YouTube, and you can watch the first episode for free at the title link.) What Sullivan likes about it is that some of the people are woke, but they’re also flawed—the show is, as he says, “humane”.  I haven’t watched the episode, but here’s a few words from Sullivan:

Mike White’s “The White Lotus” is a tragicomic exposé of our current moneyed elites and the psychological dysfunction they labor so mightily under.

. . . And the most repellent characters are two elite-college sophomores, Olivia and Paula, packed to the gills with the fathomlessly entitled smugness that is beginning to typify the first generation re-programmed by critical theory fanatics.

. . . “The White Lotus” is not an anti-woke jeremiad. It’s much subtler than that. Even the sophomores seem more naïve and callow than actively sexist and racist. The miniseries doesn’t look away from the staggering social inequality we now live in; and gives us a classic white, straight, male, rich narcissist in the finance jock. But it’s humane. It sees the unique drama of the individual and how that can never be reduced to categories or classes or identities.

Well, I’m not that heartened by this show and the scenes I watched, and it looks a bit like Sullivan is grasping at straws, hoping for a sign from god that the Zeitgeist is changing. But the other seven bits are more heartening.

2.) and 3.) Articles in The Atlantic and New Yorker (!!) that, explicitly and implicitly, criticize wokeness:

Both The Atlantic and The New Yorker have just published long essays that push back against woke authoritarianism and cruelty. Since both magazines have long capitulated to rank illiberalism, this is encouraging. And since critical theory is an entirely elite-imposed orthodoxy, it matters when the ranks of the elite crack a little.

Anne Applebaum links the woke phenomenon to previous moral panics and mob persecutions, which is where it belongs.

I wrote about Applebaum’s article in The Economist about a week ago, and you can find the link and my analysis here.

The New Yorker article (free if you didn’t exceed your clicks there) was a real surprise becayse it presented a fair and sympathetic view of behavioral geneticist Kathryn Paige Harden, a University of Texas professor who is a social-justice advocate but at the same time a person who sticks to genetic data. And that data says that many of the traits variable among individual people, including IQ, have a substantial genetic basis. I was going to write about this but I was so taken aback that I couldn’t (just kidding). Harden has a book coming out that you’ll want to read:

This fall, Princeton University Press will publish Harden’s book, “The Genetic Lottery: Why DNA Matters for Social Equality,” which attempts to reconcile the findings of her field with her commitments to social justice. As she writes, “Yes, the genetic differences between any two people are tiny when compared to the long stretches of DNA coiled in every human cell. But these differences loom large when trying to understand why, for example, one child has autism and another doesn’t; why one is deaf and another hearing; and—as I will describe in this book—why one child will struggle with school and another will not. Genetic differences between us matter for our lives. They cause differences in things we care about. Building a commitment to egalitarianism on our genetic uniformity is building a house on sand.”

That’s incendiary for the New Yorker. Differences in achievement based on genetic differences??? As Sullivan notes:

At some point, this will require a measure of rethinking, a moderation of the left’s absolutist blank-slatism just as the evidence is finally disproving it once and for all. The Successor Ideology, remember, holds that genetics play no role in human society, and that all inequalities are a function of the environment. Take that absolute claim away — which is to say to subject it to empirical testing — and it crumbles. And The New Yorker just took it away.

But the Woke will just ignore Harden or revile her, as they’ve been doing, even though she’s somewhat of a Social-Justice warrior. She’s fiercely smart and someone to admire.

4.) The Economist‘s two articles criticizing Wokeness. I discussed them separately, here and here, and those posts give the links.  Remember, folks: you read it here first!

5.) A “nuanced” review by Jesse Singal in the New York Times Book Review about a new book by Helen Joyce on trans ideology. I hadn’t read this, but have now (see it by clicking screenshot below), 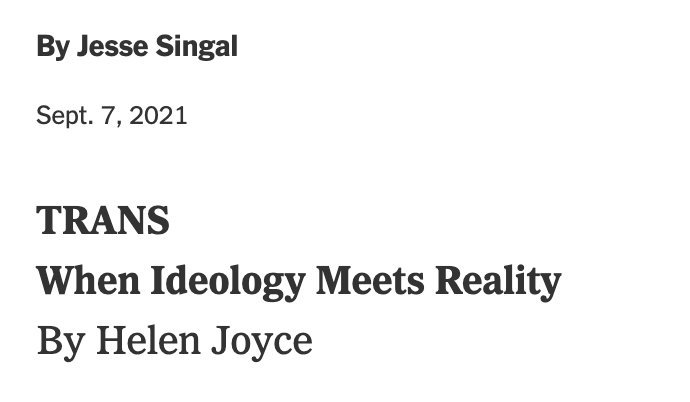 Singal, who himself has criticized the view that you are whatever sex or gender you declare yourself to be, is sympathetic to Joyce’s views. From the review:

Joyce is no conservative hard-liner, nor is she seeking some reactionary rollback of trans rights — she favorably cites the United Kingdom’s status quo on these issues, which balances legally enshrined protections for trans people with exceptions that allow for truly single-sex spaces in some settings, such as rape shelters. She also opposes legislation that strictly polices trans people’s access to bathrooms.

But she does believe that biological sex matters, that females have a right to truly sex-segregated spaces (with some compromise-oriented exceptions), and that gender-identity ideology threatens these ideals. Treating transgender people with dignity and respect and accommodation, Joyce says, does not require embracing a worldview she describes as fundamentally anti-scientific. Here she appeals directly to liberal ideals of religious tolerance: “I demand the same freedom to reject and oppose gender-identity ideology, and in return gladly accept that others have the right to preach it and live by it.”

Many of Joyce’s arguments boil down to the idea that trans people aren’t the only ones with skin in the game here. Where self-ID reigns, she writes, other vulnerable groups potentially suffer. Cisgender women, for instance, lose full access to truly sex-segregated realms that offer protection and other benefits, such as locker rooms, sports teams and prisons, because the primacy of gender identity within this ideology renders the concept of biological sex fundamentally irrelevant.

. . . “Trans” is a compelling, overdue argument for viewing self-ID more critically. Even those outraged by Joyce’s positions would benefit from understanding them, given that, as she notes, self-ID polls quite poorly when its actual tenets are fully described to Americans and to the British.

Again, I’m surprised at the NYT publishing Singal’s positive review. Had it appeared on Science-Based Medicine, Novella and Gorski would have removed it immediately, as they did with Harriet Hall’s positive review of Irreversible Damage by Abigail Shrier. Another crack in the wall.

6.) The New York Times adding John McWhorter as a twice-a-week columnist. As you know, McWhorter does not conform to current Woke ideology on race, but he’s annoying the hell out of the Woke because he’s a liberal black man with contrarian views. If you subscribe to the NYT, you can get his columns emailed to you for free; sign up here. But the columns show up on the regular pages a day after they’re emailed, so you can read them all here a bit late. His latest, “What should we do about systemic racism?“, reprises the reasons he sees for the black/white achievement gap in academic performance. You’ve probably read his arguments in these pages as they were adumbrated in McWhorter’s now-defunct Substack posts.

7.) People accosting Sullivan to tell him that they’re sick of woke behavior. His quote:

And then there’s a purely anecdotal reflection, to be taken for no more than that: all summer, I’ve been struck by how many people, mostly complete strangers, have come up to me and told me some horror story of an unjust firing, a workplace they’re afraid to speak in, a colleague who has used antiracism for purely vindictive or careerist purposes, or a hiring policy so crudely racist it beggars belief. The toll is mounting. And the anger is growing. The fury at CRT in high schools continues to roil school board meetings across the country. Some Americans are not taking this new illiberalism on the chin.

8.) Finally, Peter Boghassian’s resignation from Portland State University on the grounds that it was so woke they harassed him constantly for questioning Accepted Woke Ideology.  I wrote about this here, and you can read Peter’s resignation letter at Bari Weiss’s Substack site. Sullivan says this shows how far the rot has spread.

Taken together, these eight episodes hearten Andrew, who says, “It’s clear to me that the antibodies to this new McCarthyism are beginning to propagate, and a calmer, middle way will at some point emerge.  Which is another way of saying: as long as the First Amendment is intact, hang in, and know hope.”

I’m not as sanguine as Sullivan, and don’t know much hope. After all, the colleges and universities of both Britain and America are solid bastions of wokeness, and their young, elite graduates are beginning to take over the mainstream liberal media. Yes, that MSM will publish pushback, as we see above, but to expect, for instance, that American universities will eventually dismantle their Diversity and Inclusion initiatives, or take down their ridiculous “bias reporting incident” sites, is to hope for too much. So long as liberals fear being called bigots and racists—and most still do—the Offended will always have the power. But, as I always say, I urge everyone to fight the madness, push back, and push back forcefully and not anonymously. When that happens, maybe the wall will start tumbling.

30 thoughts on “Andrew Sullivan suggests that Wokeness is already on the wane. Is it?”