I am running very low on photos, with less than a week’s worth left—and some of them singletons.  Please send your good wildlife/street/travel photos, or we’ll have to abandon this feature.

Today’s contribution is from a regular, Mark Sturtevant, whose IDs and descriptions are indented. Click on the photos to enlarge them.

Here are more pictures of arthropods from way back in 2019. These were taken at various Michigan parks late in the season. Autumn was rapidly closing in, and this is my final set of pictures for readers from that year.

First up is a six-spotted fishing spider (Dolomedes triton), with barely a one inch leg span, so she is just a youngster. Folks may remember earlier pictures in which I used a much bigger adult spider to show that they are able to catch fish and also dive under water. But here this little one is demonstrating that they are quite skillful at hunting above the water as well. 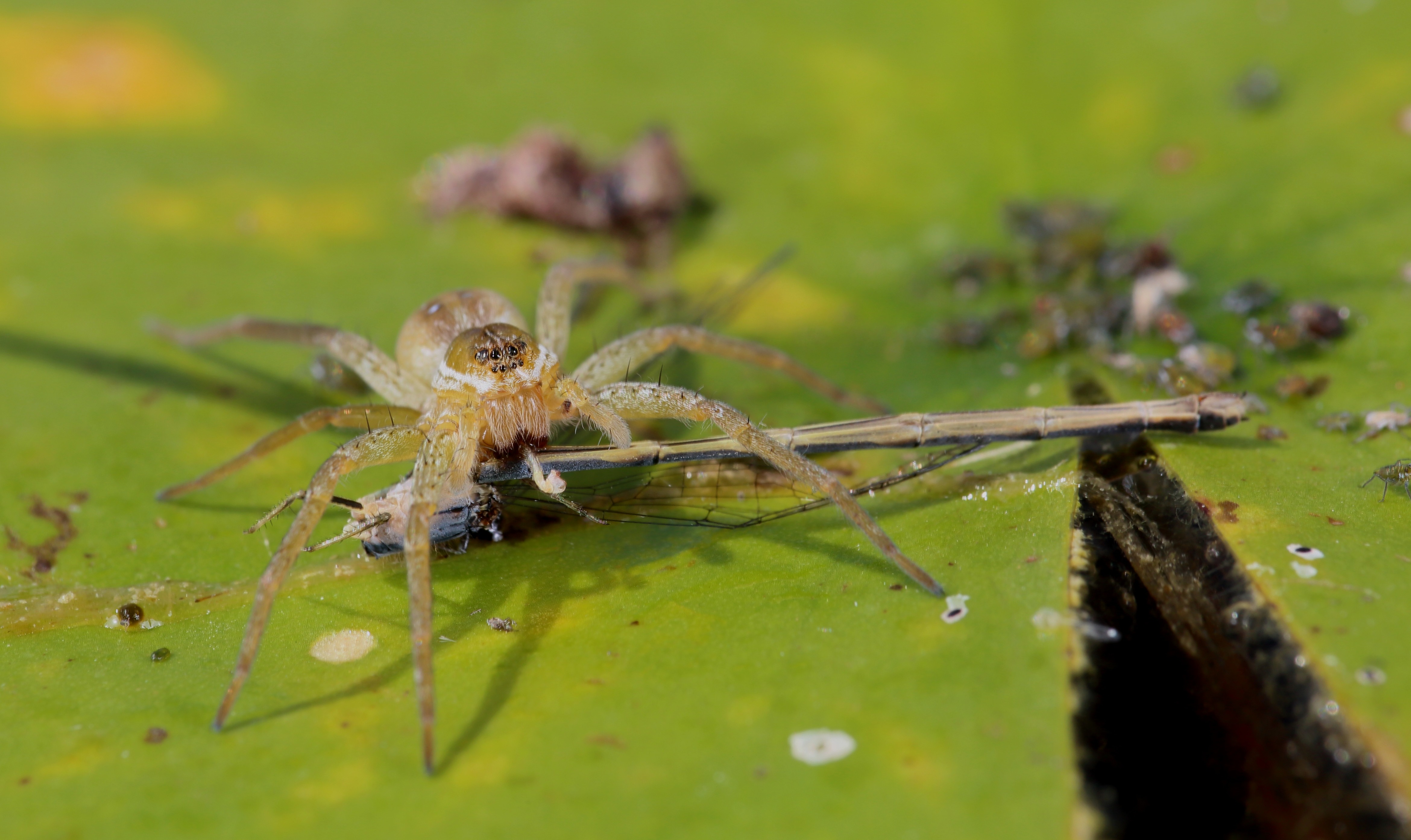 This very small Muscid fly (species unknown) was so intent on feeding on a drop of berry juice that I could get all fancy at using my highest magnification capabilities. A good macro lens with a Raynox diopter attached can do wonders at boosting magnification. If people don’t have a macro lens, a Raynox diopter is still an easy and inexpensive way to get good close up pictures with the lenses you have now.  Raynox lenses were also helpful at taking the next two pictures. 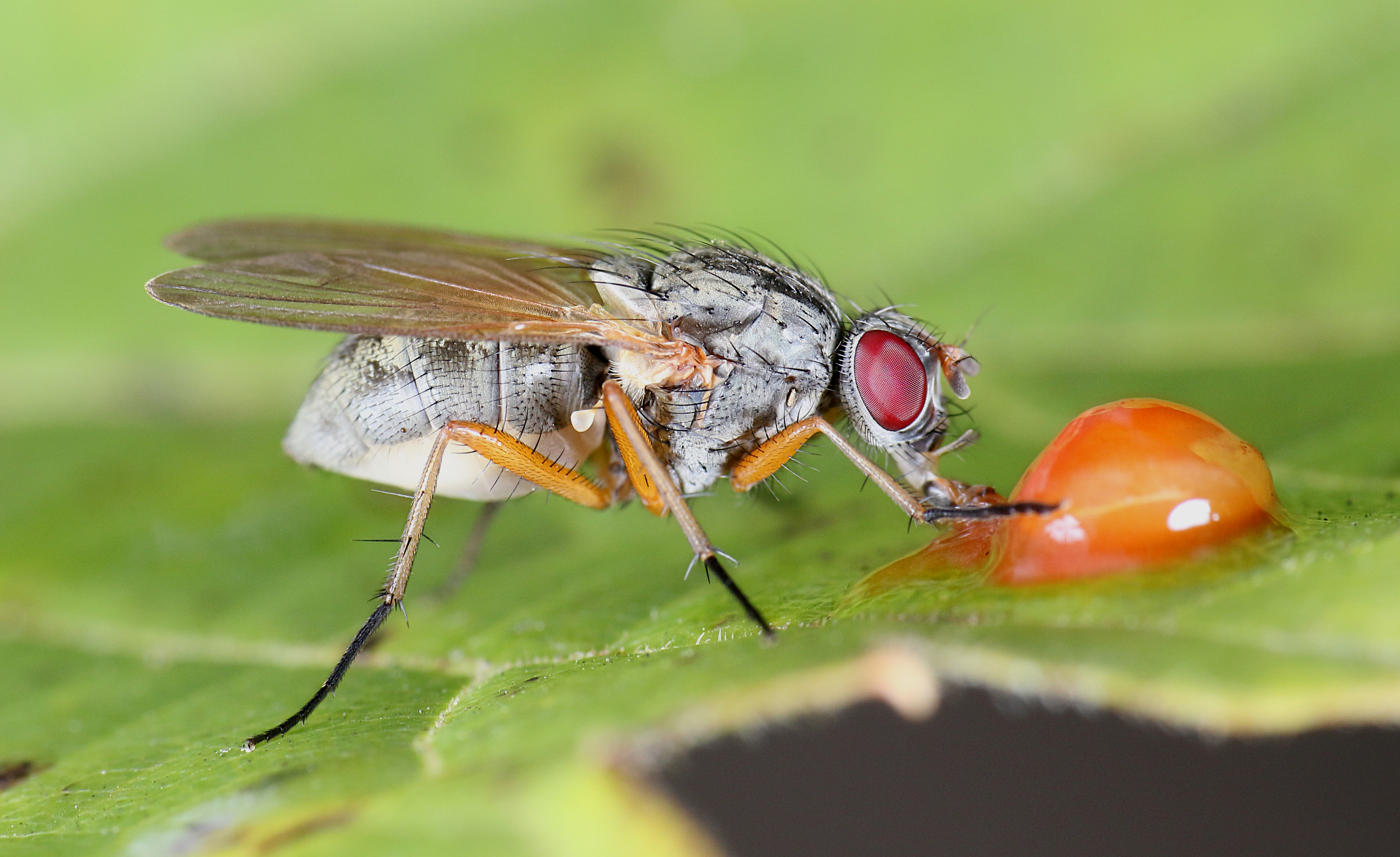 I can usually find a few of these psychedelic leafhoppers in my yard (Graphocephala coccinea). Most are blue and red, but some are green and red. An accepted common name is ‘candy-striped leafhopper‘: 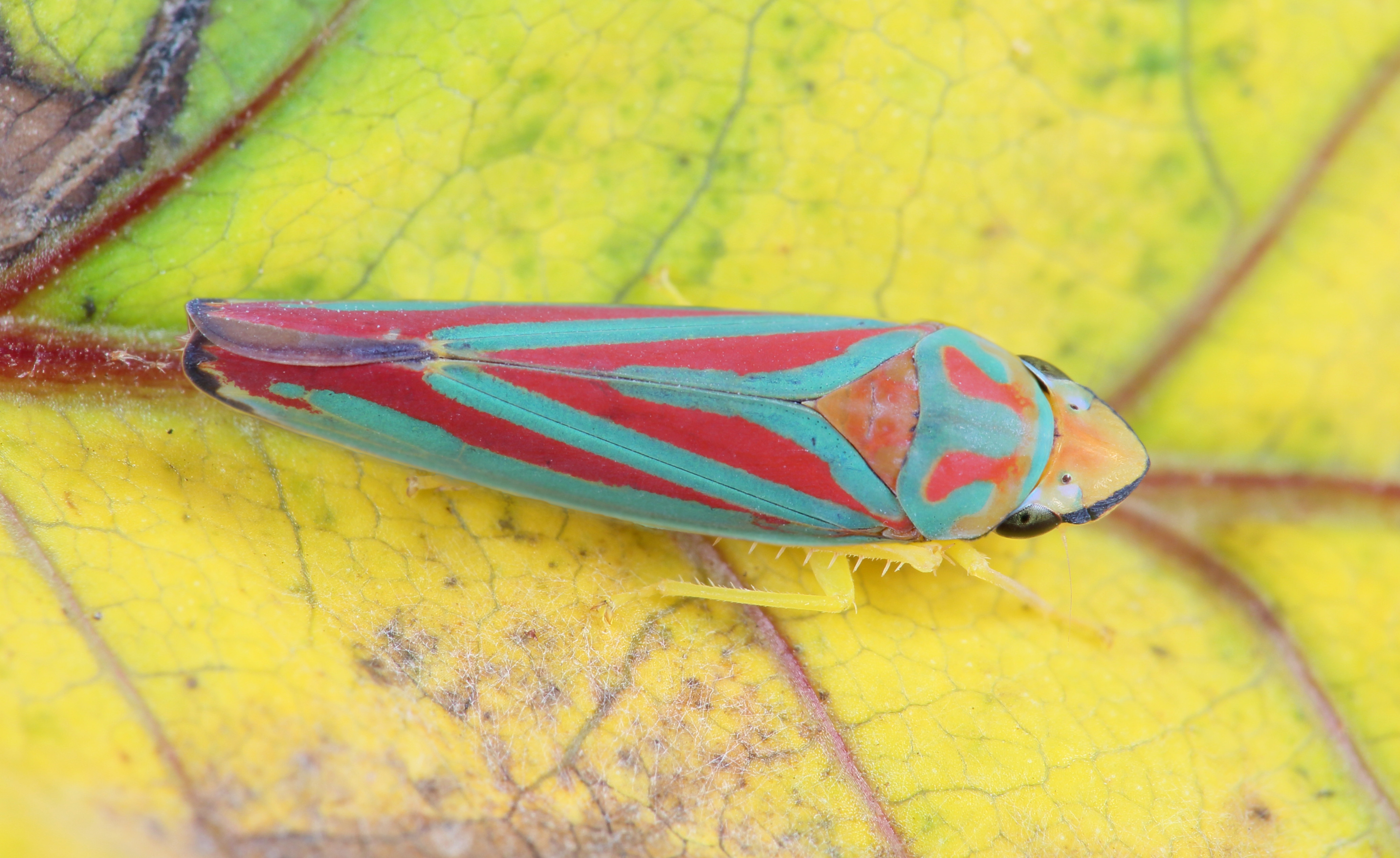 I saw this marsh fly (Tetanocera sp.) with something odd stuck on it. Marsh flies are fortunately pretty mellow about being photographed. What I saw through the camera viewfinder was a significant surprise, for this one was carrying a bunch of little pseudoscorpions! Pseudoscorpions are small arthropods, related to scorpions, and they are known for hitching a ride on insects as an aid to their dispersal. Now I must look carefully at each marsh fly that I see. 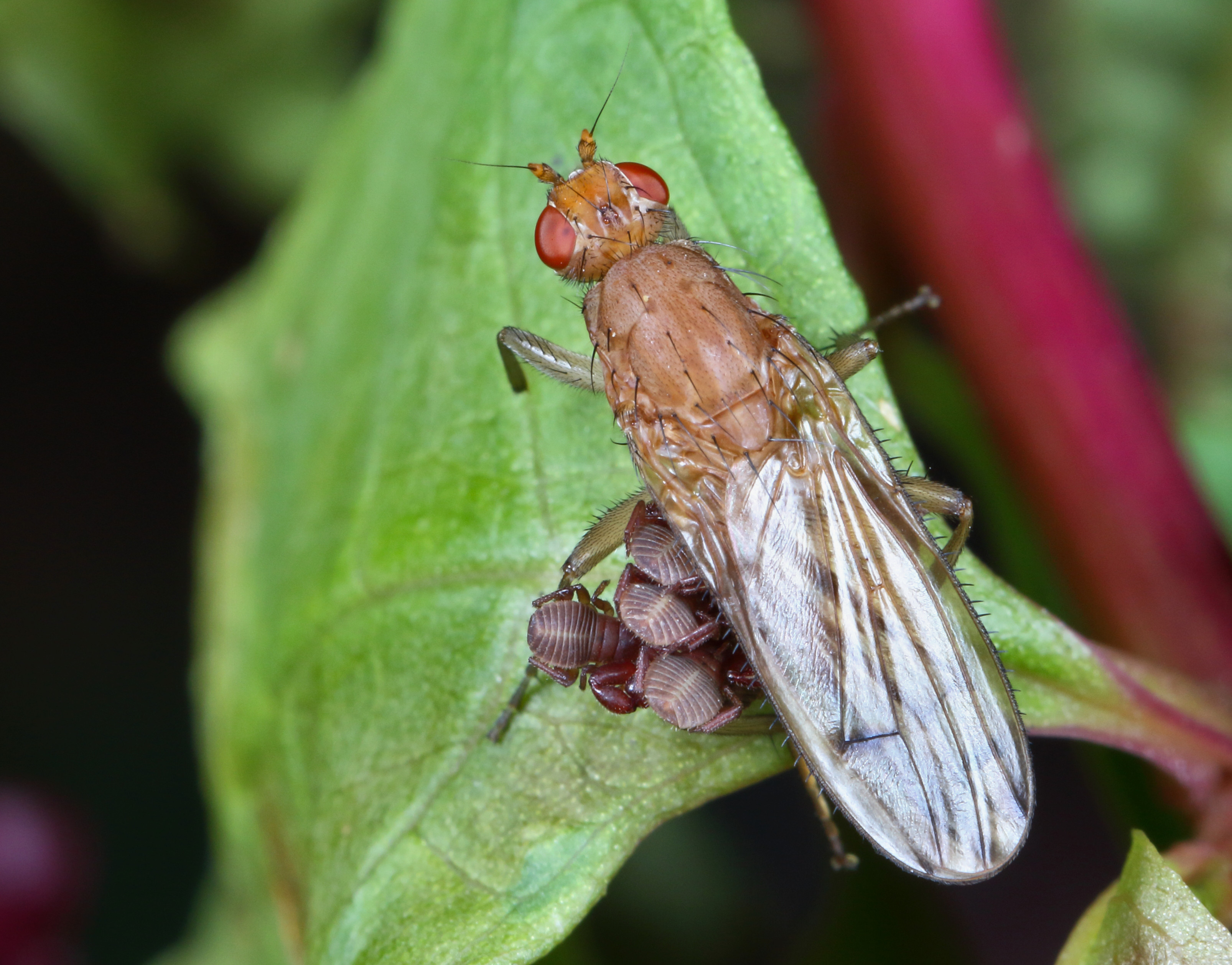 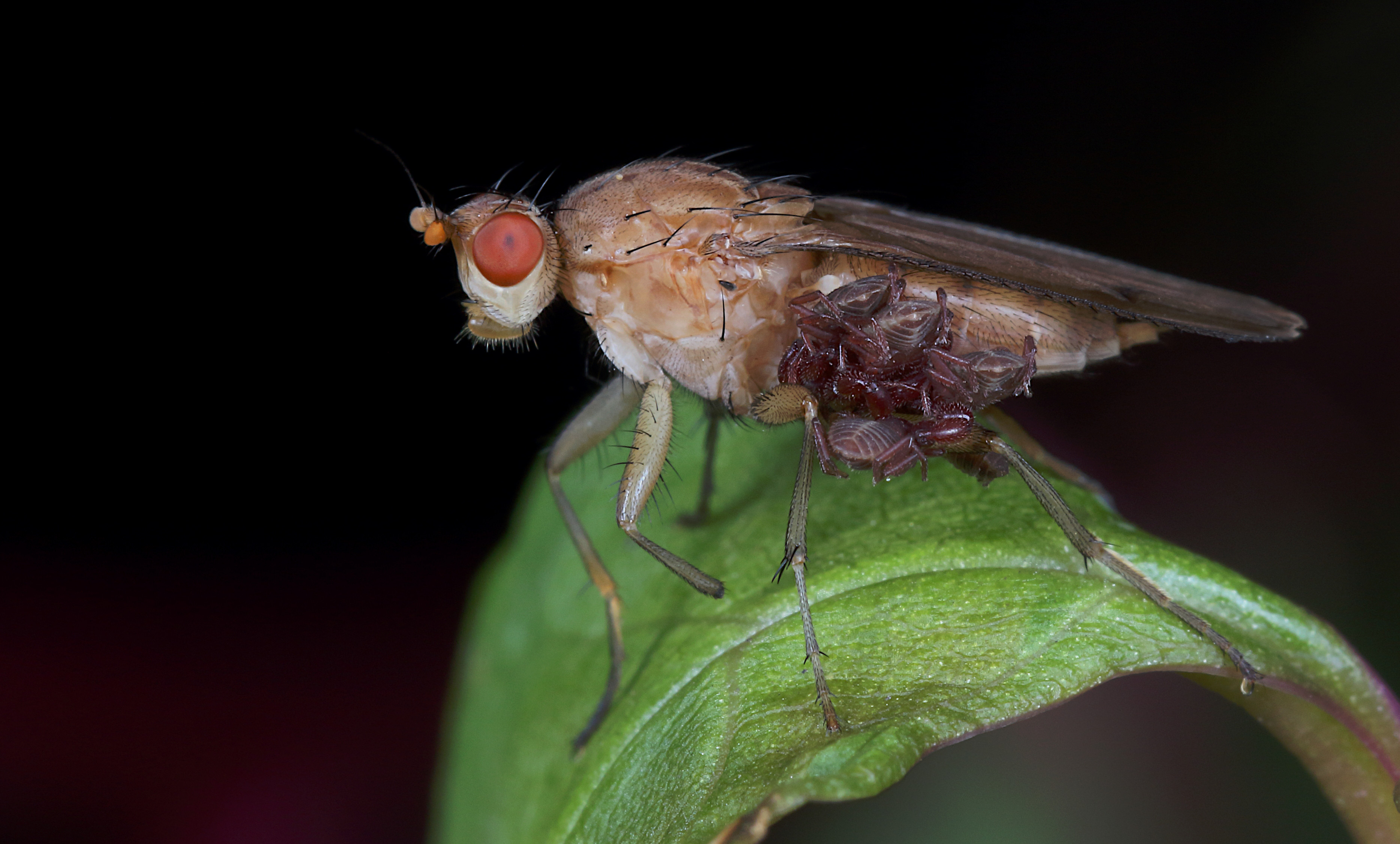 Next up is our largest damselfly, the great spreadwing (Archilestes grandis). The first picture shows a lovely male, and the second is a mated pair in which the male (on the left) is guarding the female while she inserts eggs into a twig above a stream. The hatchlings will have to drop about eight feet to the water below. 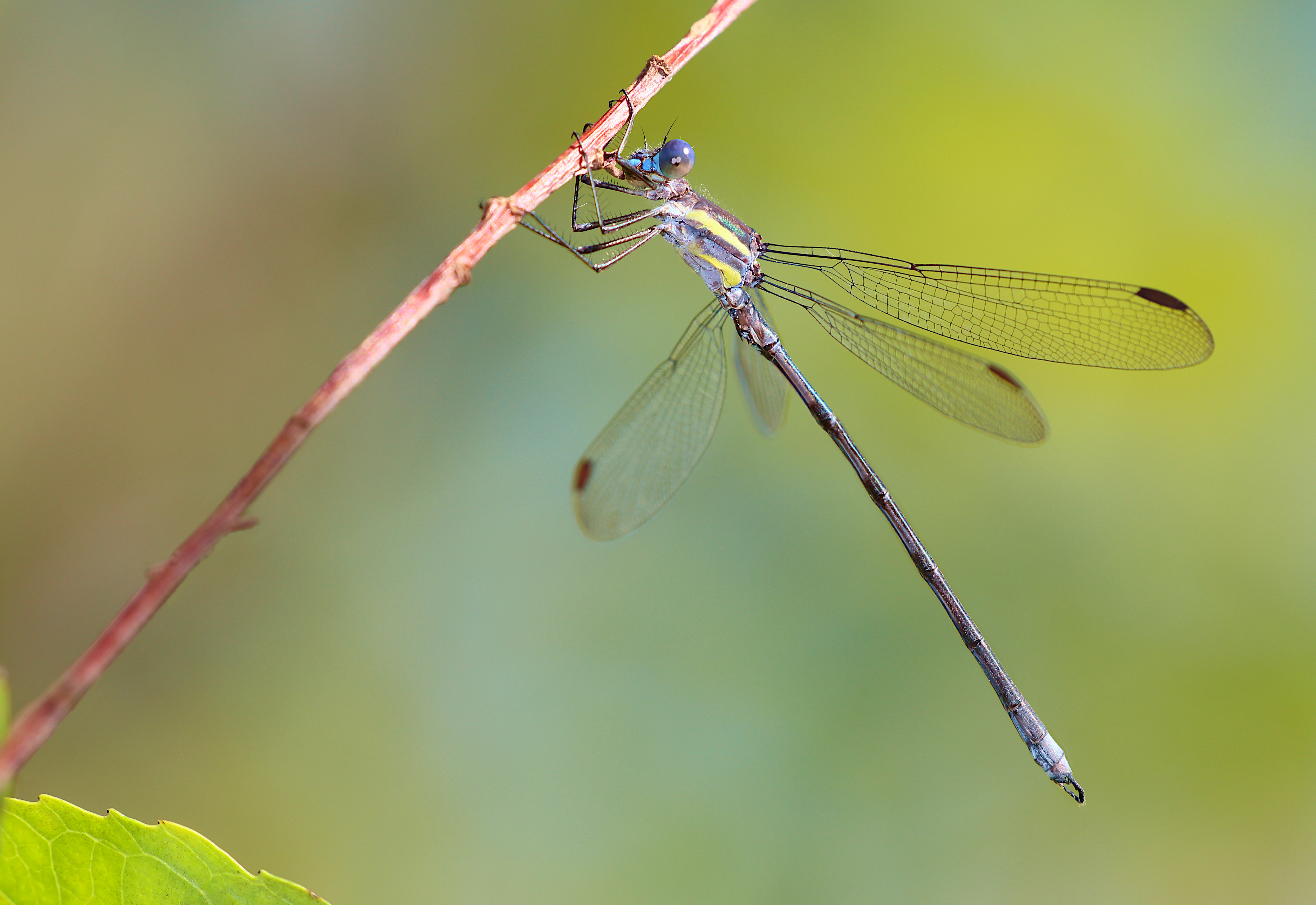 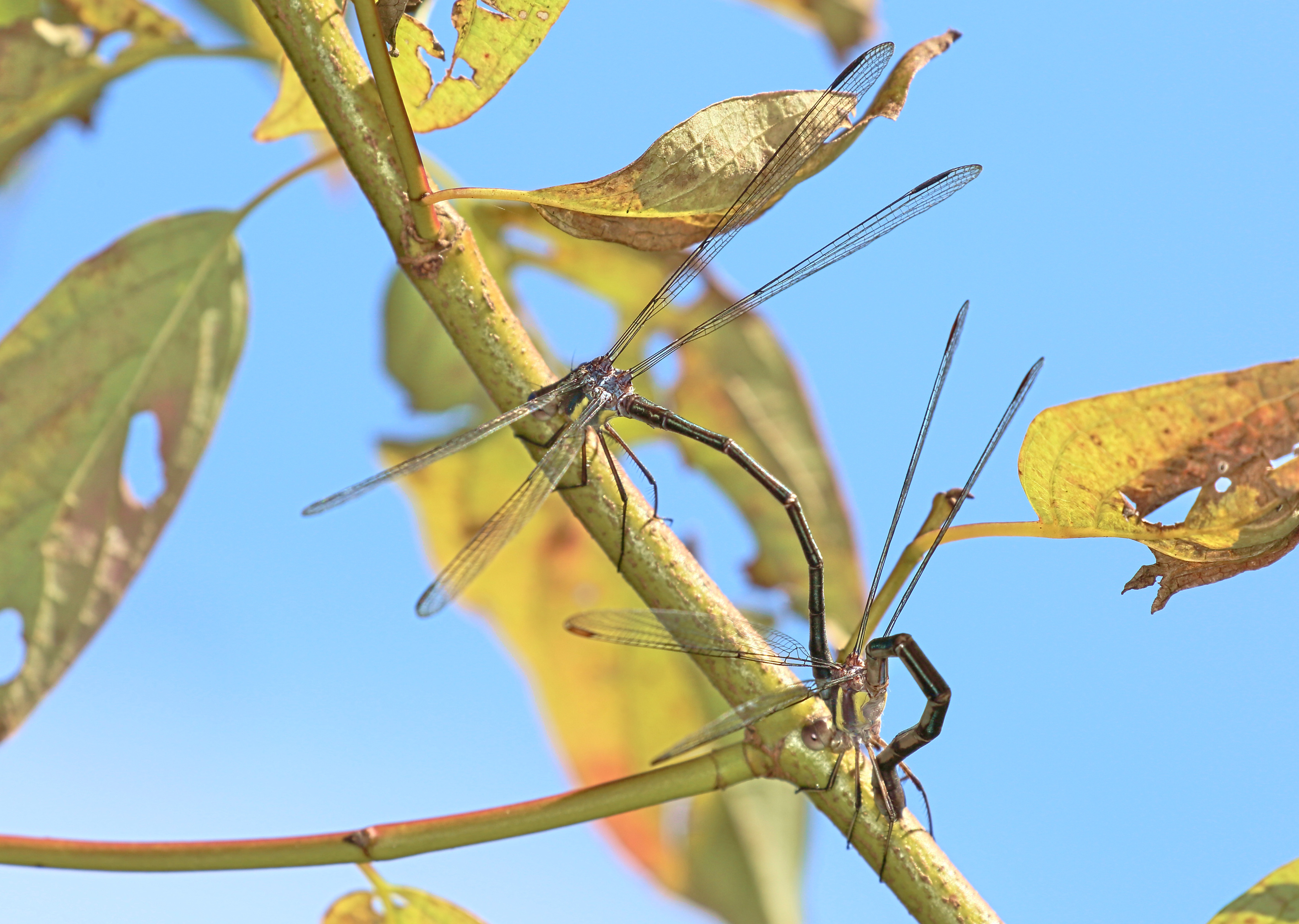 Next up is an underwing moth that I found in a park shelter while waiting out a sudden rain shower. The species looks to be Catocala amatrix. “Catocala” is Greek for ‘beautiful below’, which refers to the flashy hind wings that are typical of this large genus of moths. Underwing moths utilize a combination of camouflage and deception to thwart predators. When disturbed, they charge into rapid and evasive flight, flashing their colorful hind wings. They generally land on a tree trunk (sometimes ducking to the back side first), and with folded wings they are well camouflaged. Underwings will often scooch over several inches after landing as well. A predator will be challenged to find the flashy insect that they were following! If I were a bird, I’d just give up. 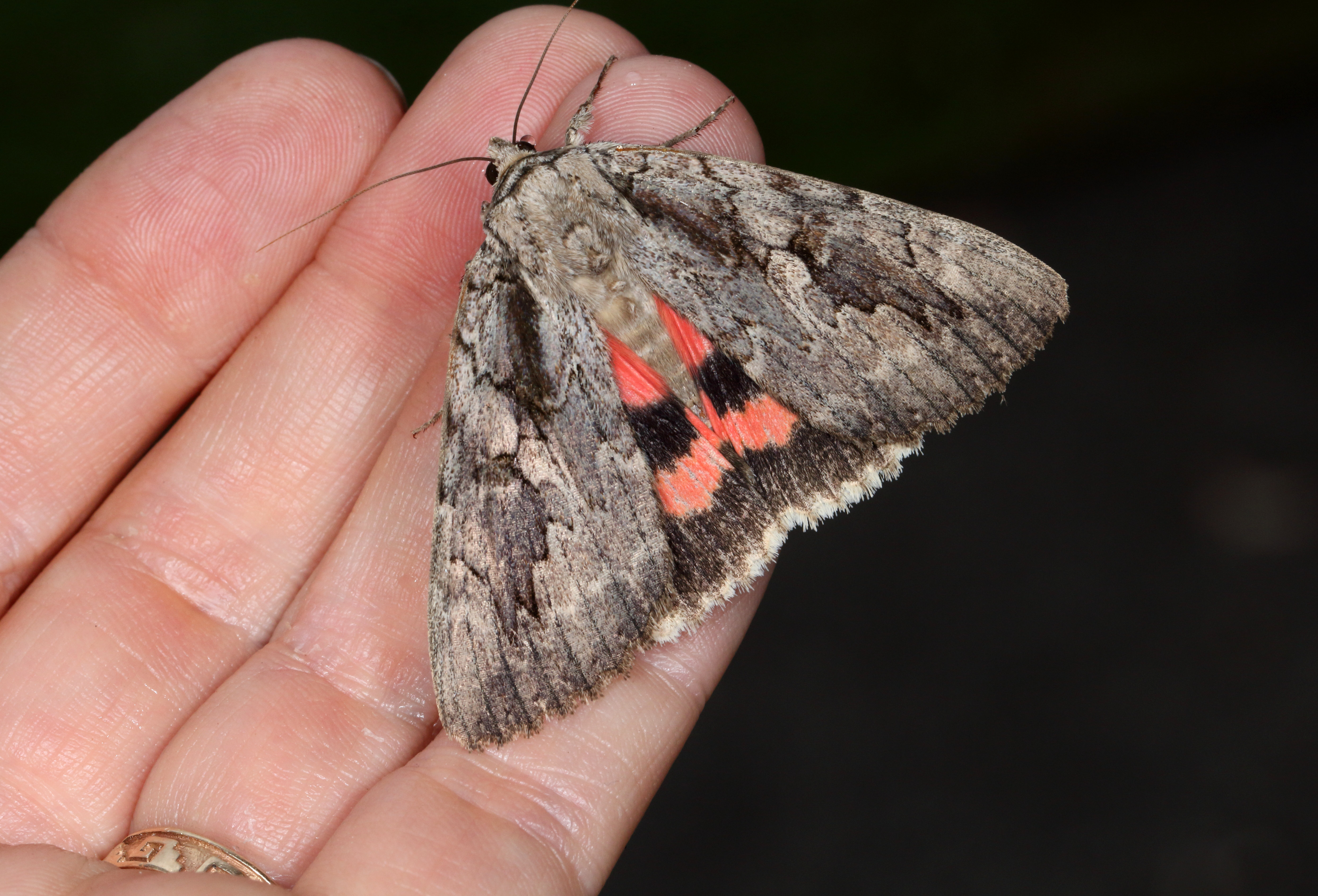 The next picture is an alien landscape of mosses and I don’t know what else, taken as a focus stacked picture early one morning. This is some of the ground cover in a marvelous place I like to call the Magic Field. 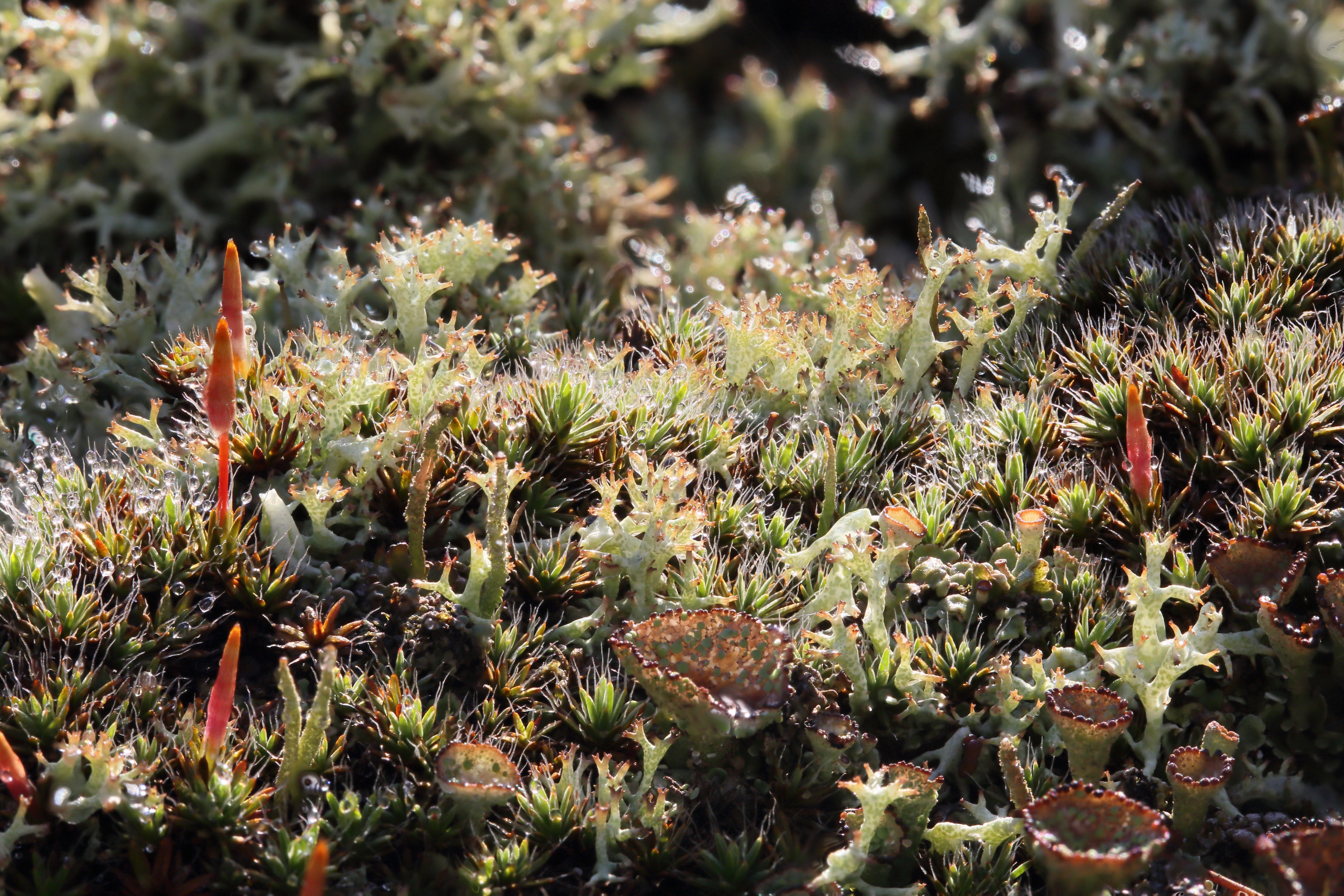 Finally, with autumn and the end of a fabulous season rapidly coming to a close, I found this queen bald-faced hornet (Dolichovespula maculate) who was going into hibernation under a fallen tree log. She was of course carefully returned to her retreat after a few pictures. 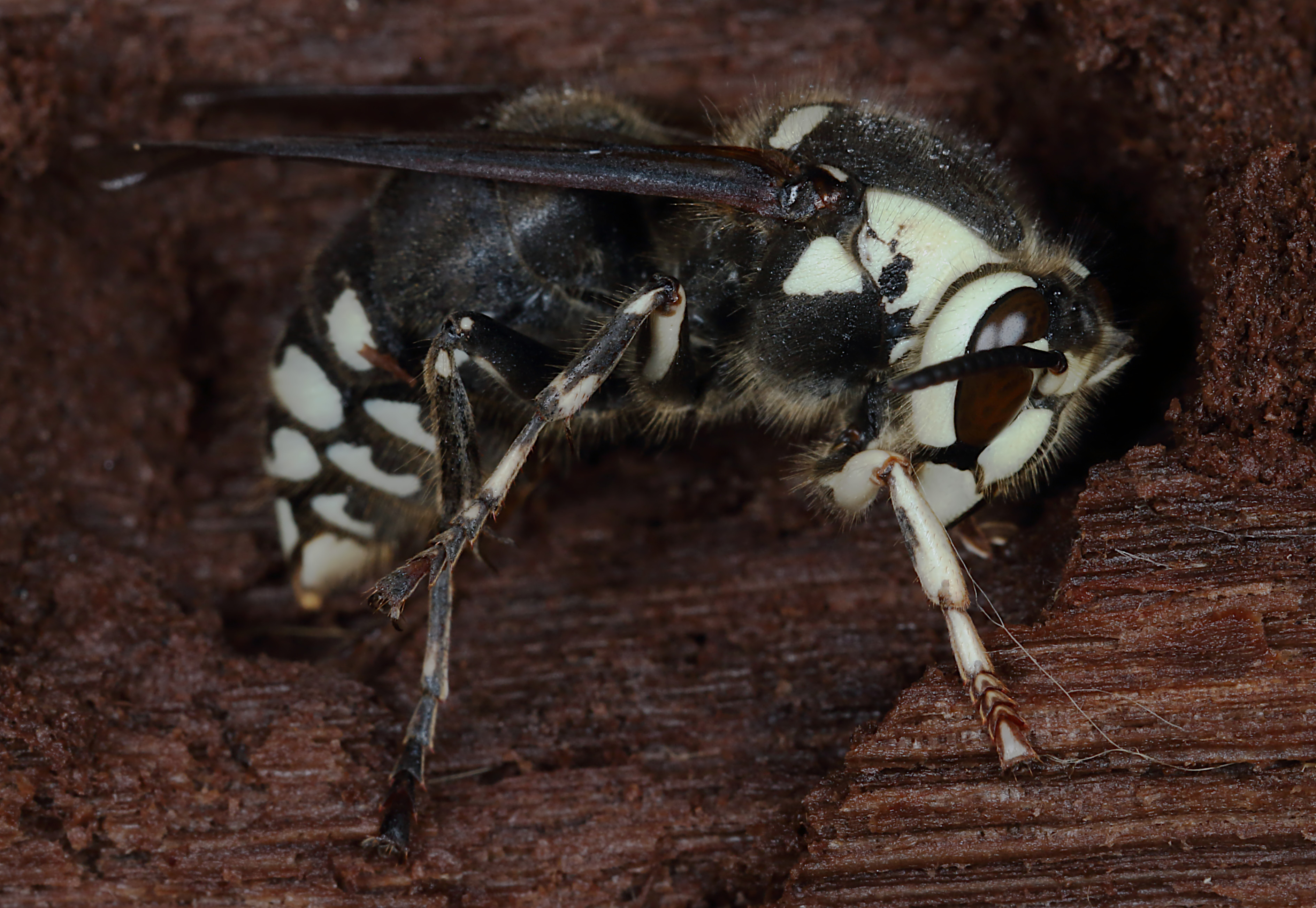