Reader Paul sent me this tweet, which links to an article describing the most pathetic and most hilarious attempt at wokeness I’ve seen yet, and that’s saying a lot.

dr. linda manyguns, an Indigenous Person in Canada, is the associate vice-president of indigenization and decolonization at Mount Royal University in Calgary, Alberta, Canada. Elsewhere she’s described as “a Blackfoot woman, born on the Tsuut’ina Nation and registered at Siksika. She is an Elder for the Buffalo Women’s Society and part of the Beaver Bundle Society.” Before moving to Mount Royal, she was a professor in and chair of the University of Lethbridge’s Department of Indigenous Studies.

She has hit upon a new form of performative wokeness: eliminating the use of all capital letters except when it comes to Indigenous People (and presumably other minorities), for those capital letters are forms of written INEQUITY.

But here’s the tweet, which links to the statement I’ve put below.

dr. linda manyguns joins the lowercase movement to reject the symbols of hierarchy wherever they are found and will not use capital letters except to acknowledge the Indigenous struggle for recognition. read her full statement: https://t.co/4CIjB5bRNp pic.twitter.com/tPHDxfb3yq

And here’s her entire statement issued by Mount Royal: 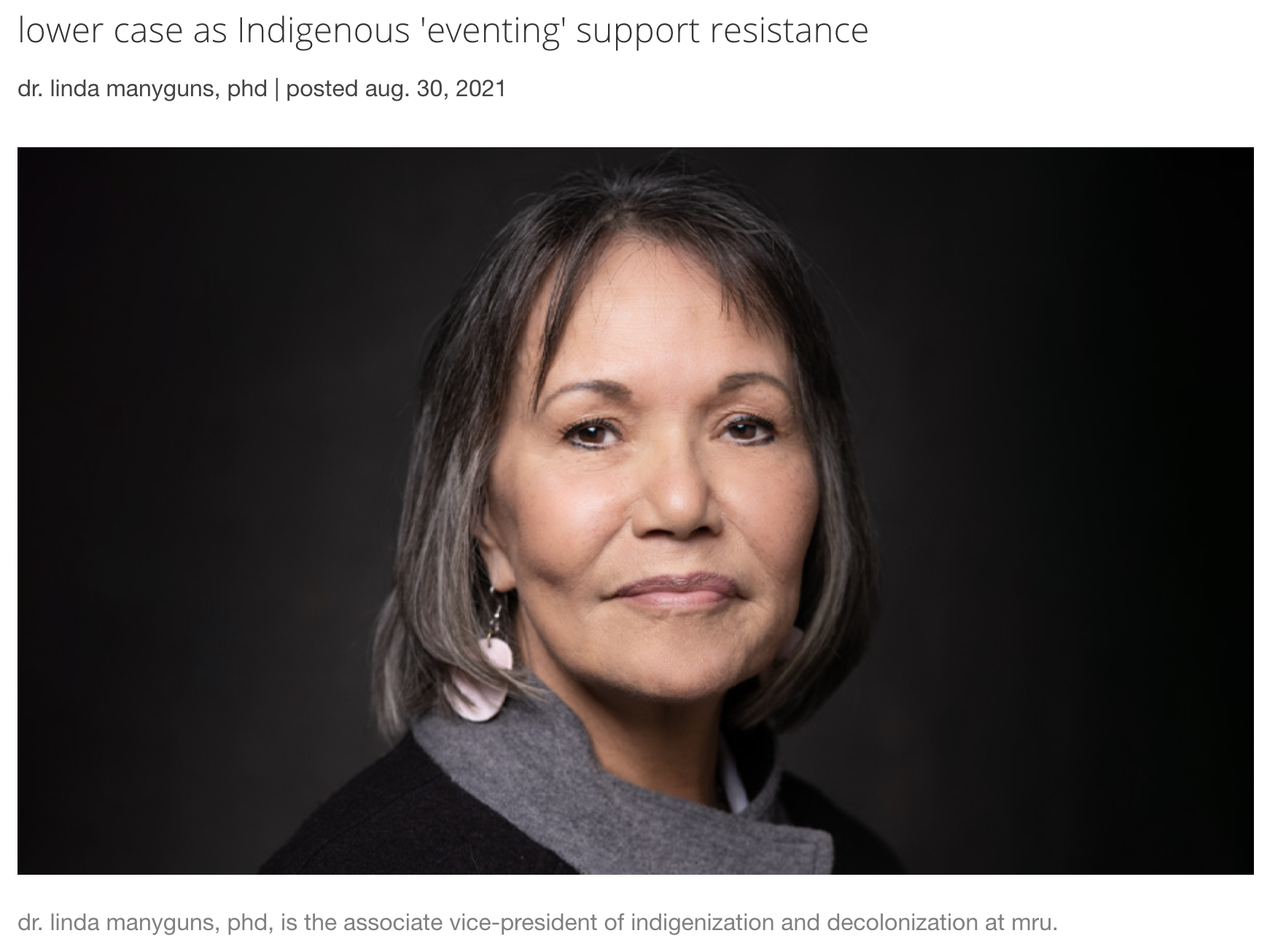 this is a beginning effort at describing the use of lower case on the website of the office of indigenization and decolonization.

Indigenous people have been actively engaged in a multidimensional struggle for equality, since time immemorial. we strive for historical-cultural recognition and acknowledgment of colonial oppression that persistently devalues the diversity of our unique cultural heritages.

these sites of struggle are generally found at blockades, where demonstrations against racism occur, where racialization and cultural domination, and discrimination leave the mark of imbalance and abuses of power. sometimes these sites generate media interest but interest is generally fickle.

the explicit demonstration and practice of aboriginal culture in everyday life or at places of resistance is called by academics ‘eventing.’

the goal of equity, diversity and inclusion of all people is synonymous with the interests of Indigenous people. we support and expand the goal of equality and inclusion to all forms of life and all people. we join leaders like e. e. cummings, bell hooks, and peter kulchyski, who reject the symbols of hierarchy wherever they are found and do not use capital letters except to acknowledge the Indigenous struggle for recognition.

we resist acknowledging the power structures that oppress and join the movement that does not capitalize.

the office of indigenization and decolonization supports acts that focus on inclusion and support the right of all people to positive inclusion and change.

This is a person who is unbalanced to the point where she sees capital letters as non-inclusive symbols of inequality. They are forms of oppression; presumably the big letters are white and oppress the small LOCs (letters of color). If I were John McWhorter, I’d say that manyguns needs therapy, but I’m not him so I won’t.

Will this catch on? So far, even Mount Royal’s Office of Academic Indigenization is still using caps, but it’s on hold during the pandemic.

The main issue is this: Will abandoning capital letters in nearly all cases help bring equality to oppressed minorities? You already know the answer.  And this, ladies and gentlemen, brothers and sisters, and comrades, is your Friday Wokeness—a prime candidate for Wokest Act of 2021.