The Big Reckoning that’s sweeping America has made its way west to California’s Muir Woods, as reported by SFGate (click on screenshot below). If you’ve been to Muir Woods (and you definitely must go), you’ll know that it’s one of the few large stands of old growth coastal redwoods (Sequoia sempervirens) left in this country, with trees up to 1200 years old. This is the world’s tallest species of tree, and they’re unbelievably tall, soaring like a verdant cathedral. (The tallest ones aren’t flagged to prevent vandalism.)

It’s always amazed me that within less than two days of driving in California, you can see the world’s oldest trees (the bristlecone pines), the tallest trees (coastal redwoods), and most massive trees (the Giant Sequoias). I’ve seen all three, and recommend them highly. It’s impossible to convey the height of the coastal redwoods in a photo, but here’s one anyway:

But we’re not here today to admire trees. Rather, we’re here to describe how the historical revisionists have hit upon Muir Woods as a way to point out the impurities of those who created this National Monument, and to honor those who were overlooked. Click on the screenshot to read: 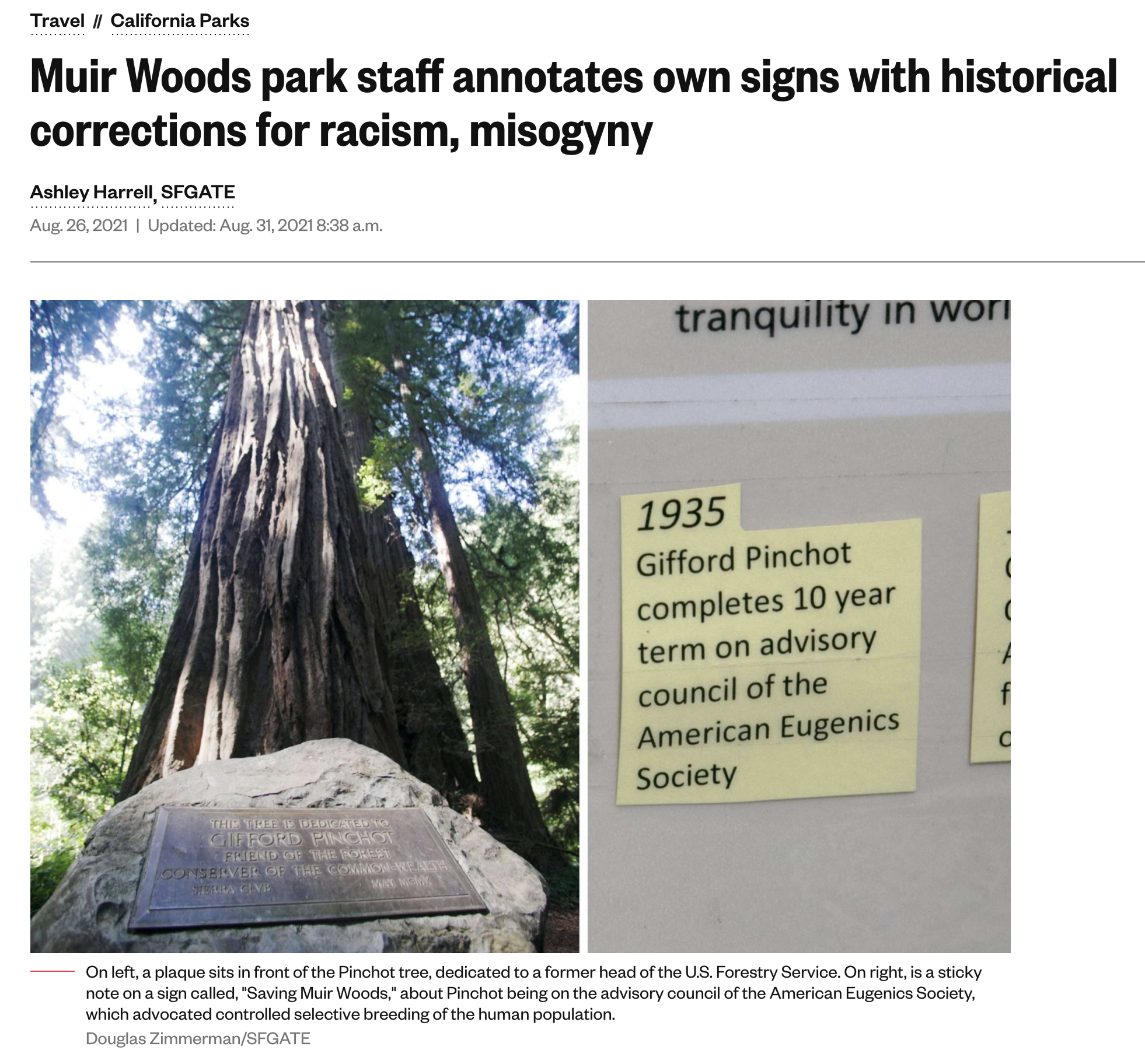 John Muir, the founder of the Sierra Club after whom these woods are named, has himself already been the subject of a deplatforming of sorts. I wrote about that a year ago, and decided that, since Muir recanted bigoted statements he made early in his life, as well as having been demonized for merely being associated with people who were impure in other ways, his denigration wasn’t really fair. (If it was, they should immediately rename Muir Woods!)

As always, I use two criteria for judging whether to engage in deplatforming or cancellation. First, is the person being honored for achievements that are admirable? Second, did the person’s life create a net good or a net bad? Given the circumstances I described a year ago, Muir shouldn’t be canceled.

But that’s not the question, which is this: “Should the exhibits at Muir Woods be changed to give ‘a more complete history’?” And you know what that means: ferret out all the stuff involved with the site that would be considered immoral today. The site’s exhibit has already been changed, with the collaboration of park employees who slapped signs and sticky notes on what was already there to revise the given history.

To me, this action is definitely a mixed bag. My take is that yes, some additional information should be added, but some information shouldn’t—on the grounds that it’s irrelevant. To why people visit the woods. They come to see the trees for crying out loud, and get a little education on the side, but they definitely don’t come to be propagandized.

For an example of the latter, take these changes, one of which is shown in the picture just above:

“Alert: History Under Construction,” the paper reads. “Everything on this sign is true but incomplete.”

The sign contains information about the park’s founding, along with a timeline of the park’s history and photographs. Credit for saving the park’s treasured redwood and creek habitat is given to “influential, philanthropic white men,” the paper explains.

“While they undoubtedly contributed to the forest becoming a national monument, part of our duty in the National Park Service is to tell the full story of how that happened,” the paper says. “Look at the timeline below to see the park’s history under construction.”

The “full story” of course, is how the white men involved with Muir woods were bad men: bigots.  And it’s true, they surely did things that we wouldn’t countenance today, but remember that the Woods came into being at the end of the 19th century and beginning of the 20th. It wasn’t exactly an enlightned time, at least compared to our own:

For an 1898 item about the man referred to as “The Father of American Forestry,” the Muir Woods staff also felt more information was needed. “Gifford Pinchot appointed Chief of what is now the US Forest Service; advocates ‘scientific forestry,’” the item reads. The staff added, “… and eugenics, … defined… as ‘controlled selective breeding of human populations (as by sterilization) to improve the population’s genetic composition.’” Eugenicists often targeted nonwhite people, labeling their races as inferior and socially undesirable. Pinchot, who for 10 years served on the advisory council of the American Eugenics Society, has a Muir Woods tree named in his honor.

The question is whether Pinchot advocated sterilization, whether his efforts actually did anything to foster eugenics in the U.S., and what good he did as head of the U.S. Forest Service. Since I (and probably the employees) can’t answer the first question, it seems superfluous to tell visitors that he was on an advisory council of a eugenics society.

Another pair of timeline items added by the staff expound on the background of Congressman William Kent, who with his wife Elizabeth Thatcher Kent donated 295 acres that became Muir Woods. One note explains how Kent’s anti-Asian policy and rhetoric laid the groundwork for Japanese incarceration during World War II, while a second note emphasizes how in 1920, Kent “advances the expansion of California’s Alien Land Laws, preventing non-citizens from owning or leasing land. These laws complicate immigration from Asia and create a more hostile environment for Asian immigrants in California.”

That’s a bit more problematic, because Kent’s donation of land is a very good thing (the park wouldn’t exist without it), but his efforts to incarcerate Japanese-Americans during WWII, and his promotion of “alien land laws”, is definitely bad. Should this be imparted to Park visitors, who come to look at the trees? I don’t know; it depends on whether you think that it’s important to tell this stuff to visitors.

What about these additions?

Before the staff marked up the timeline, which is entitled “Path to Preservation,” its first item was the 1872 establishment of Yellowstone National Park, the world’s first national park. And while that was certainly an important precedent, the staff of Muir Woods felt that other events that took place long before were also crucial to the establishment of the park. They added four sticky notes to a blank area to the left, starting with the stretch of time when 20,000 Coast Miwok and Southern Pomo people managed the land and conducted prescribed burns, taking care of the forest.

Other insertions include a note for 1769, when Spanish missionaries began using the labor of Bay Area’s indigenous people, who then grappled with disease, slavery and genocide (which created a disruption in the stewardship of the land). An 1861 note tells how Congress extinguished the Indian title to the land that became Muir Woods, and an 1869 note mentions how John Muir — the famous naturalist for whom the park is named — included racist language in writings about indigenous people.

The exploitation of indigenous people by missionaries is reprehensible, but has nothing to do with Muir Woods. The previous occupation of the woods by Native Americans, however, should be mentioned—it’s part of the site’s history. Whether you want to harp on Native American genocide is up to you, but remember that every square centimeter of North America was claimed by Native Americans before the colonists arrived, and once you know that, and the disgusting genocides that pushed Native Americans off their land (this should be taught in schools), you needn’t repeat it every time you give a lecture.

I don’t think Muir’s racist mentions of indigenous people should be brought up, because he repudiated those ideas later in his life. If you can’t change your mind in a way that makes your words or actions more moral, but must still be held accountable for things that you repudiated—and not under pressure—then we’re all doomed.

But here’s a good change:

The notes also address overlooked contributions of women, for instance, when the California Club — an elite women’s club — in 1904 launched the first-ever campaign to save the land that would become Muir Woods.

That’s part of the history that overlooks the contributions of an important group.

The impression I get is that this revision of the history of Muir Woods was done as a performative act rather than thoughtfully, and that while some of the history needs to be revised, it should be history that’s relevant to Muir Woods, not a litany of the bad things said by those associated with the Woods. This “revision” has all the signs of being a rush job intended to jump on the bandwagon of the times, and that’s kind of sad.

31 thoughts on “Muir Woods gets its reckoning”