As I started to write this post, my stomach literally became queasy, for it makes me unhappy to not only see woo like astrology purveyed to the public (there’s no evidence that it works, at least as predicting your personality or future), but also see it purveyed in a magazine like The Nation.  Now I don’t often read that magazine, but when I have I got the impression that it was a serious periodical tilted toward the Left. Wikipedia notes that it’s the oldest weekly magazine in the U.S. (replacing an antislavery periodical in 1865), and that it covers “progressive political and cultural news, opinion, and analysis.”

I guess “progressive” now includes “woo”, because “progressive” periodicals, including the NYT, are now running articles on discredited or unsupported practices like dowsing and astrology (see Greg’s post on the latter).

Now, as it appears from the article below (click the screenshot), The Nation has also drunk the Kool-Aid with a profile and interview of astrologer Alice Sparkly Kat.

But wait! It’s even worse. Sparkly Kat connects astrology with anti-racism, intersectionality, and colonialism, though you won’t learn much about their connections from the loosey-goosey interview.  Sparkly Kat has even written a book about “postcolonial astrology” (see photo below), which you can learn about here—if you can stand to see a dozen buzzwords all strung together.  Oh, hell, read for yourself. This is what we’ve come to:

Astrology is a language that millennials, Gen Zers and many others continue to build fluency in, and look to to inform their everyday lives, decisions and relationships. But so much more than a fad, astrology is an intersectional, political and magickal language with a cross-cultural history that informs our relationships to the planets. According to Brooklyn-based astrologer Alice Sparkly Kat, astrology is the ideal magical lens through which we can parse the harsh neolliberal [sic] and colonial systems of power that harm marginalized people. It’s these very systems that misappropriate the language, symbols and wisdom of the planets to prioritize self over the collective.

Impeccably researched and informed by the author’s deep knowledge, Postcolonial Astrology offers an advanced course in politicized astrological history and application, and an explicitly Queer, POC and instersectional [sic]resource. This is not a “learn your sun sign” introductory guide. Rather, the book serves as a history and toolkit, decoding the planets from a postcolonial perspective. In one chapter Sparkly Kat traces the disparate cultural applications of the planet Saturn. Once symbolically linked to fortune and a mythic agrarian “golden age” of abundance, Saturn’s qualities have been co-opted by political agendas and misused by power and capital interests. We see this misappropriation of Saturn’s wisdom embodied by the Jeffersonian vision of a white, land-owning state that mythologizes an imaginary agrarian golden age that perpetuated violence against marginalized bodies.

Note as well that The Nation puts the piece in the “Colonialism” section.

The interviewer, Mary Retta, is the education columnist for Teen Vogue, which tells you everything you need to know about her. 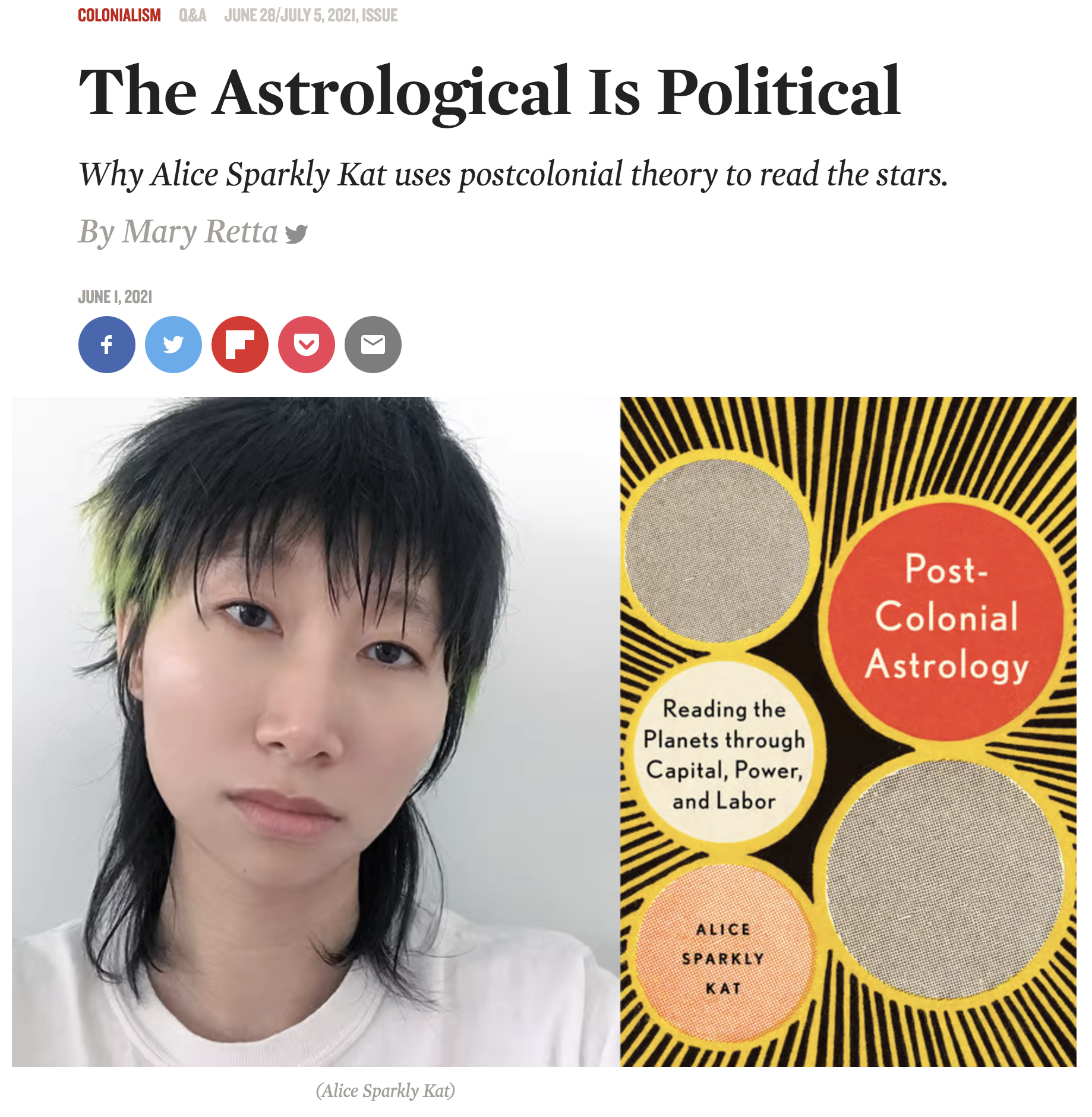 Everything’s in there: woo, colonialism, post-colonialism, racism, gender, marginalized people, and capitalism. It’s a witches’ brew of nonsense, and not palliated by any content that makes sense. As usual with many astrologers in “mainstream media”, Sparkly Kat is koy about whether astrology actually connects the alignment of stars and planets with your personality as well as your future, but if you go to their website (which includes the expected victim narrative), you’ll see that yes, it does. Sparkly Kat does “readings”, though the price isn’t available and they’re booked up “until the summer” (but it is summer).  They are just not explicit it about it in this interview. (Sparkly Kat uses “they” and “their” as her pronouns.)

So have a look at these four Q&A interchanges and see if they make any sense. (They don’t to me.) And then tell me why on earth The Nation is publishing stuff like this.

MR: Why did you decide to analyze astrology through a postcolonial lens in this book?

ASK: A lot of my favorite thinkers and people whose work I was reading at the time inspired me. The funny thing is, if you look at a lot of post-colonial theory, astrology is already in there. Sylvia Wynter talks about the sub-lunar and beyond-lunar realm. If you look at Achille Mbembe, he’s talking about the light side of the empire versus the nocturnal body of the empire. Jodi Byrd’s book The Transit of Empire looks at a Venus transit. I’ve been reading all of these thinkers for years. For me postcolonial theory deals with issues of cultural belonging, citizenship, and who gets to belong where, which are also central to my astrology practice.

I suspect that nearly all these connections are tangential, just like one can connect rejection of evolution with white supremacy because some evolution rejectors are racists.

MR: Each of your chapters looks at the history and etymology of a planet. I particularly liked how you used the chapters about Venus and Mars to look at gendered power dynamics. How do you believe we can use astrology to complicate Western ideas of gender?

ASK: The binary gender system is very Western, so going into the book I was interested in learning more about how these ideas came about historically. While reading Hebrew stories from around the time of the Roman empire, I learned that the way that Venus and Mars were conceptualized was often in relation to the military, which also explains how we think about gender today. Venus was a city under siege—she’s vulnerable, needs protection, and is automatically feminized. While Mars is an invading army, so it becomes very masculinized.

What’s interesting though is that in later astrological interpretations, Mars was often seen as very effeminate, and Venus was also seen as a masculine planet. In Western astrology today Venus is more like an idea of femininity that was created by men.

First of all, just because some societies that aren’t Western don’t describe genders as absolutely binary doesn’t mean that “the binary gender system is very Western.” I suspect that long before the rise of the West, cultures in Asia, Africa, and South America were pretty much doing the male-female thing ages ago.

But what does this have to do with planets? This interview is a series of assertions about gender, the West, colonialism, and racism, with no clear connection to astrology. Is there now a new generation of astrologers who don’t really have to study astrology, bogus as the practice is, but can slap the label on themselves, make up stuff and then connect it with the Zeitgeist, charging a pretty penny for an intersectional consultation? That is my theory, which is mine.

A bit more, and then it’s time for Pepto Bismol. This is the part where they’re koy about whether your personality and fate can actually be affected by the planets and how they were aligned when you were born.

ASK: Yes, definitely. The most popular type of astrology right now is usually horoscope columns, which are usually written by white women, though this is starting to change. Horoscopes today can often be very limiting; there’s something about horoscopes as a genre that’s like, “You’re going to talk about relationships and career,” and that’s it. As a form, I think horoscopes can do much more, but we don’t always get to see that. I know astrologers who say that horoscopes are like a recipe, or your medicine for the month: They can be a poem, a collage, a series of questions. I write monthly horoscopes, and I usually try to leave my readers with questions, a way to introspect, and a way to interrogate their relationship to capitalism.

The “white woman” reference is obscure, but you can probably guess what she means.  Here we see that horoscopes can “do a lot more” than just tell you about your career and relationships, implying that they are potent predictors or guides, but see the next exchange for the caveat. Horoscopes are also recipes, medicines, poems, and questions, as well as guides to introspection.  But do you need planets and stars for that?

Below you see where she evinces the deeply unscientific nature of astrology. In reality either works or doesn’t work (the latter is the case), and is not something that becomes true if you believe in it. And what does Sparkly Kat mean by saying “it’s a social agreement”? Does that mean that when you go to an astrologer, the agreement is “I’ll pay you money and pretend to believe you if you pretend that the stars and planets will guide my future”? I think they’re confusing “social agreement” with “social construction.”

MR: For as much as astrology has grown in popularity, there are still a lot of skeptics. What would you say to people who think that astrology is fake, or believe that astrology can never be political?

As for astrology “existing as a political form”, I have not the slightest idea what Sparkly Kat means. It’s a sad state of affairs when someone can actually support themselves peddling stuff like this. But, as P. T. Barnum supposedly said. . . .

Most important, why are MSM places suddenly afflicted with a penchant for publishing stuff about woo?

Oh, I found a video in which Sparkly Kat talks to another astrologer, Kirah Tabourn. It’s more or less what you’d expect. The conversation starts at 6:50.

50 thoughts on “The Nation touts astrology”