Today we have prairie photos from reader Jim McCormac. His captions are indented, and you can access his photos by clicking on them. (Jim’s “massive photo website” is here, and his blog is here.)

Here’s a pictorial tour of a particularly notable southern Ohio prairie. I also included image files as separate attachments, thinking they might be easier for you to work with. But if embedded files within the email are sufficient, let me know and I won’t attach them separately in the future.

A snippet of Chaparral Prairie in southern Ohio’s Adams County. I went there on August 5 to find the prairie in peak bloom. It is a botanist’s – and entomologist’s – dreamscape. In this photo, the round white flower clusters of rattlesnake-master (Eryngium yuccifolium) punctuate the foreground. Purple wand-like inflorescences of spiked blazing-star (Liatris spicata), golden pyramidal floral arrangements of early goldenrod (Solidago juncea), and the huge basal leaves and towering flower stalks of prairie-dock (Silphium terebinthinaceum) fill out the scene. 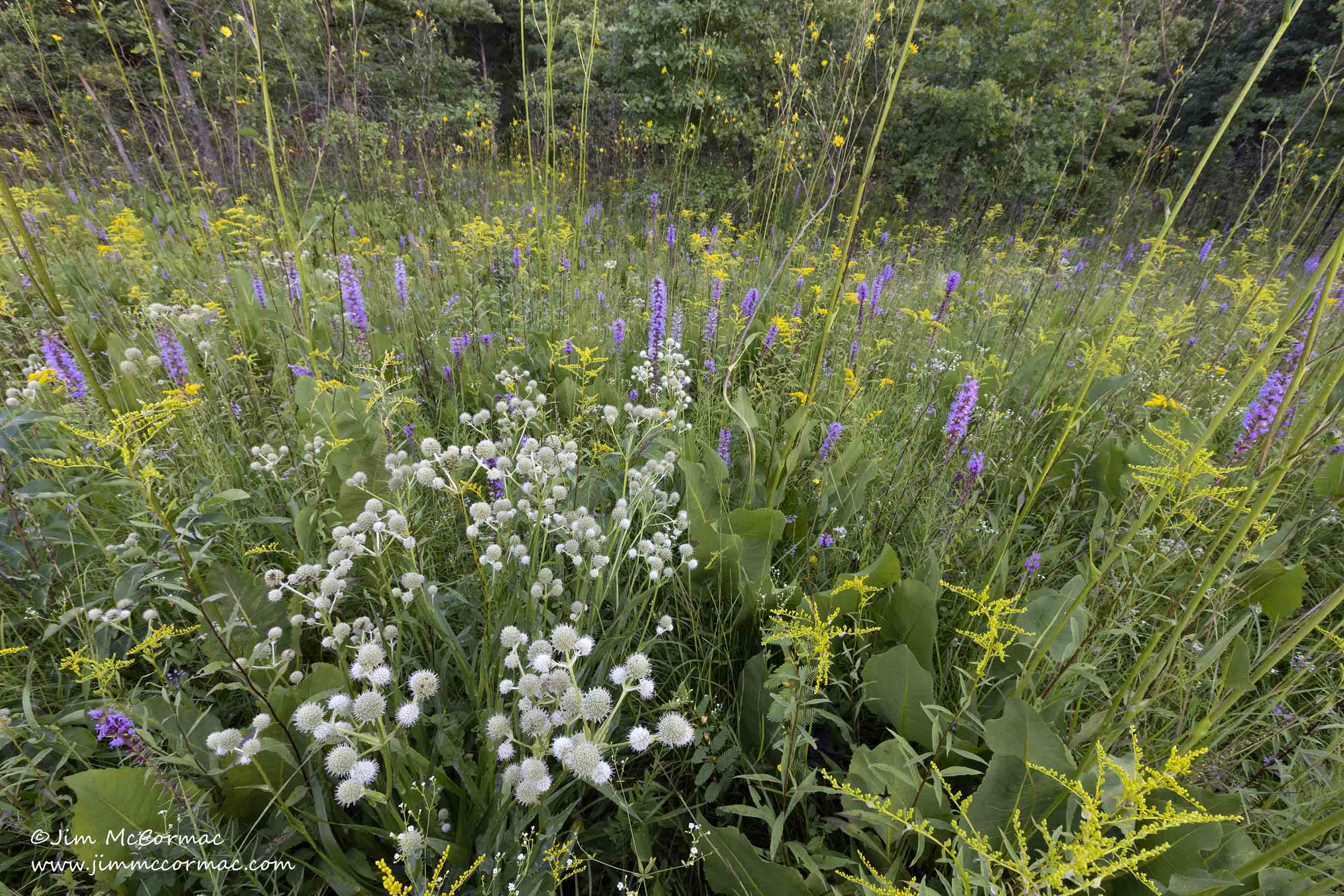 Lush stands of spiked blazing-star are especially conspicuous, both to human visitors and pollen-seeking butterflies. 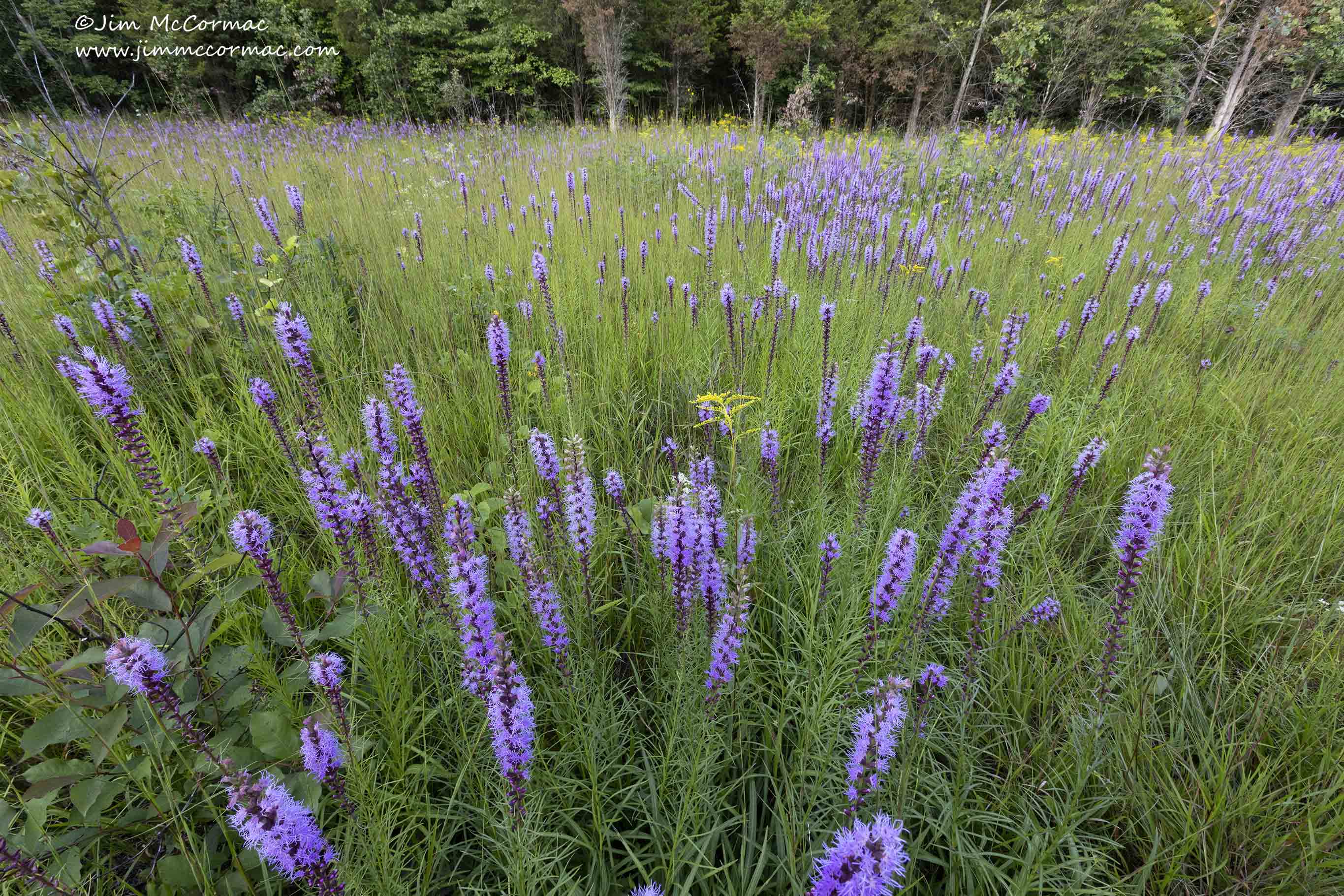 The discerning botanist will find much of interest beyond the showy mega-flora. This small wildflower is bluehearts (Buchneria americana), a species of dry prairies and barrens. It is a member of the broomrape family (Orobanchaceae), whose members are hemiparasites. They derive some sustenance from tapping into the roots of surrounding plants, although I am not sure which species the bluehearts pirates nutrients from. 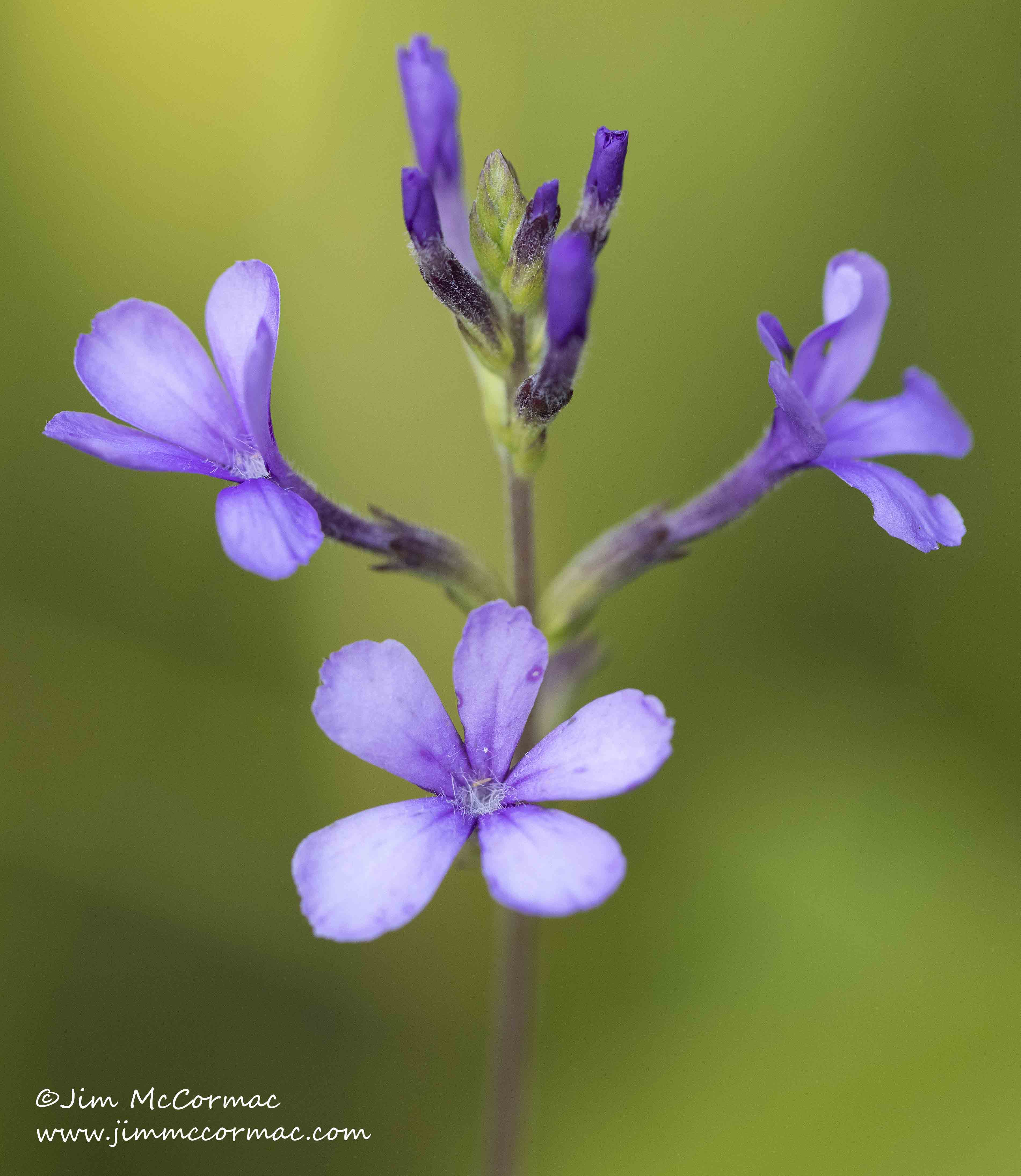 Careful searching is required to find the diminutive pink milkwort (Polygala incarnata). A six inch tall plant would be a whopper, and it grows in sparsely vegetated zones of the most barren areas within the prairie. 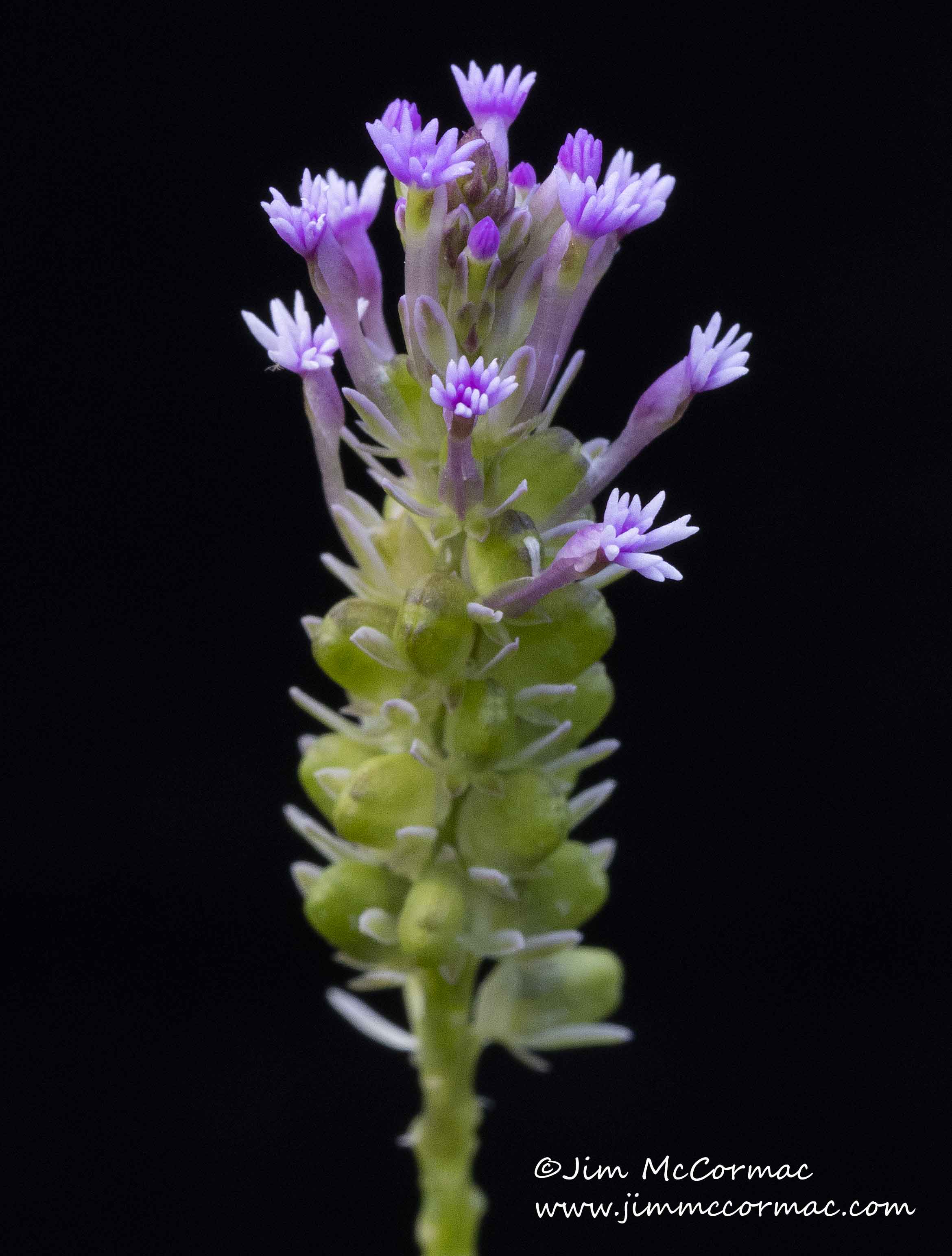 Far more conspicuous is nodding wild onion (Allium cernuu), one of the showiest members of the onion family (Alliaceae). 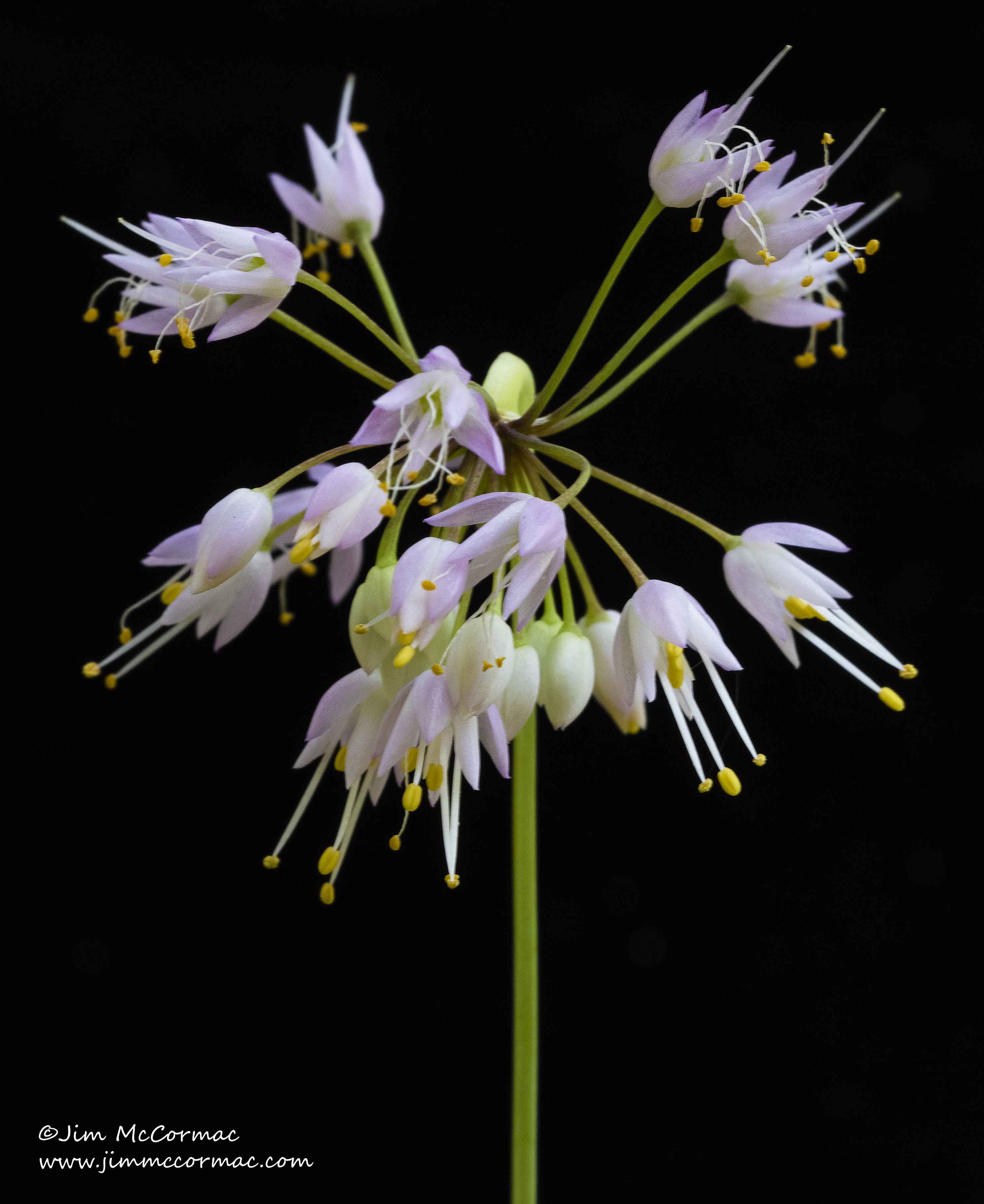 The rich botanical diversity of Chaparral Prairie attracts legions of pollinators, both obvious and obscure. This monarch (Danaus plexippus) was one of many that I saw. They are especially smitten with the blazing-star. Habitats such as this are critical way stations fueling this insect’s amazing migration to wintering grounds in oyamel fir forests in central Mexico. 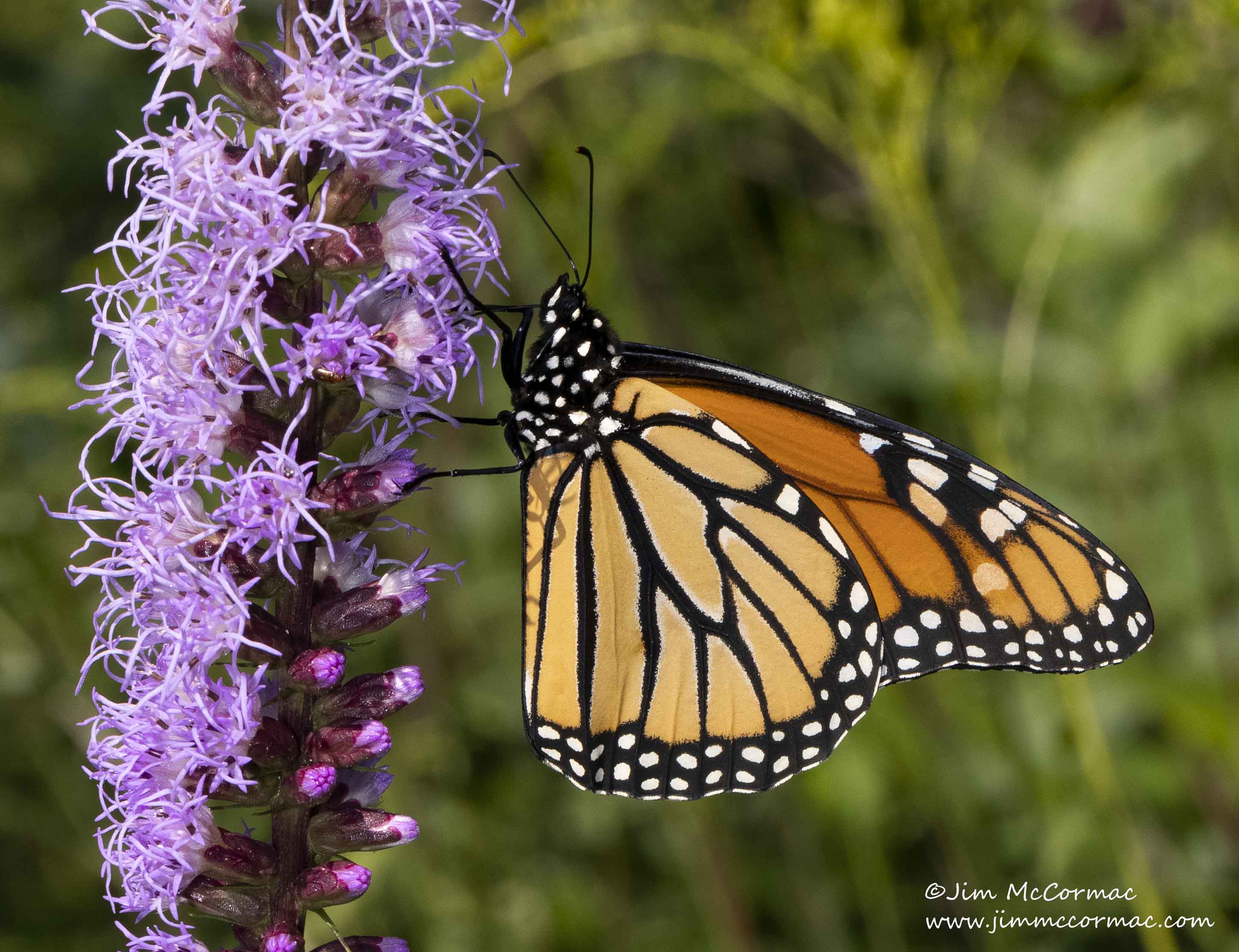 Many other butterfly species were present, although most were not as conspicuous as the monarchs. This is a tawny-edged skipper (Polites themistocles) nectaring at nodding wild onion. 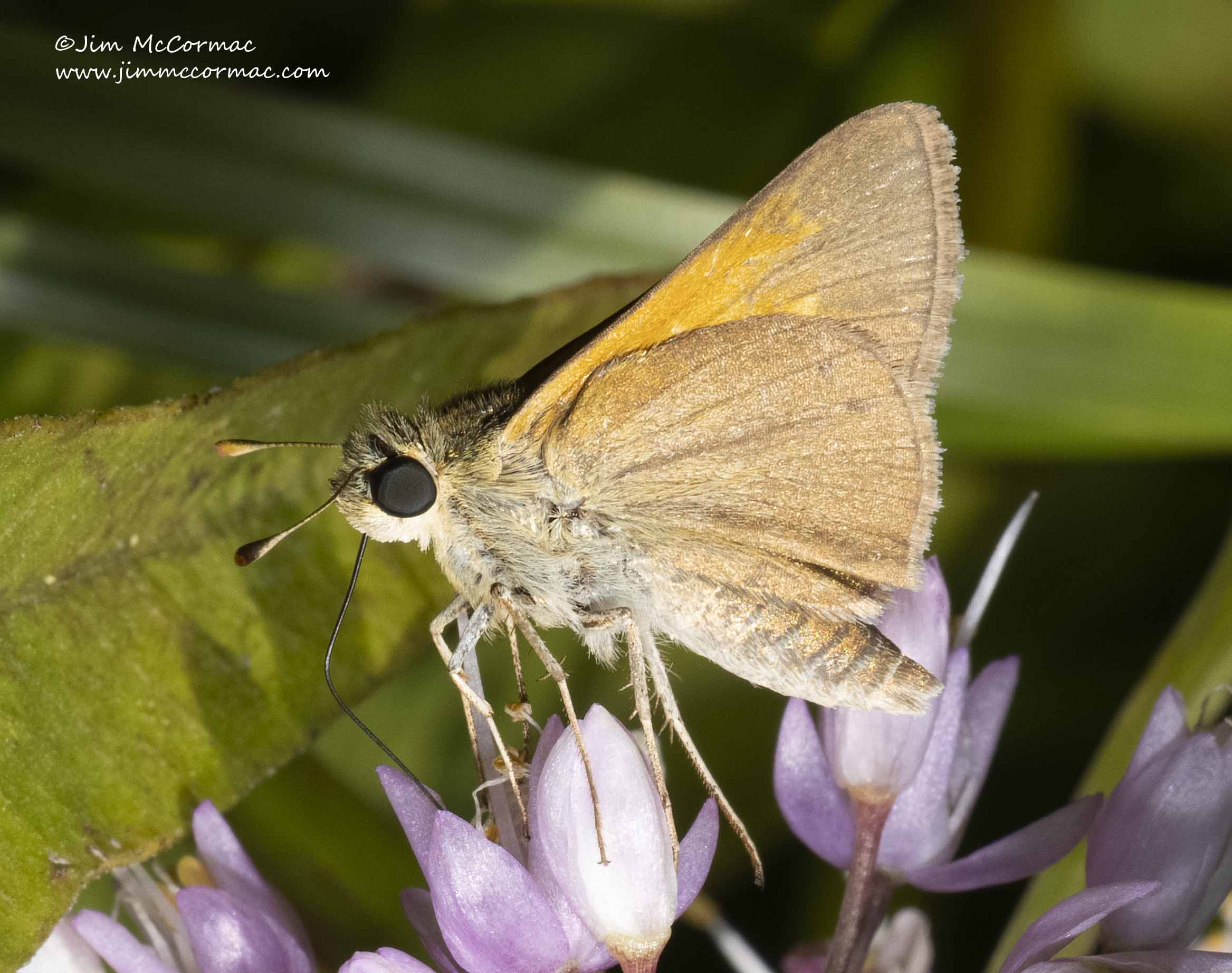 Scores of small native bees worked the flowers, and the rattlesnake-master blooms were especially attractive to this group. This is an orange-legged furrow bee (Halictus rubicundus). Many other bee species were present. 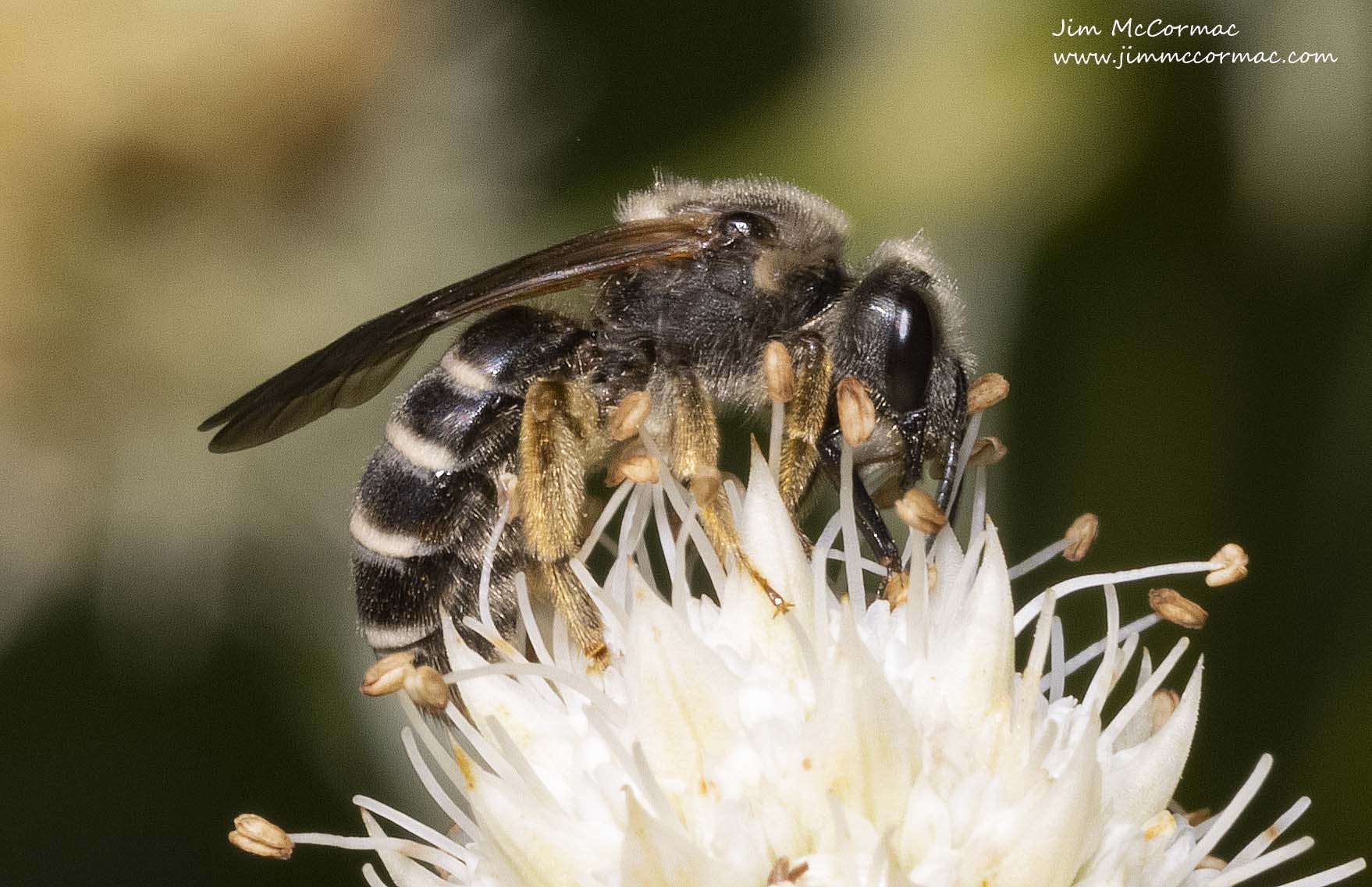 Beetles of many stripes formed an important component of the pollination crew. This is a wedge-shaped beetle (Microsiagon limbata). 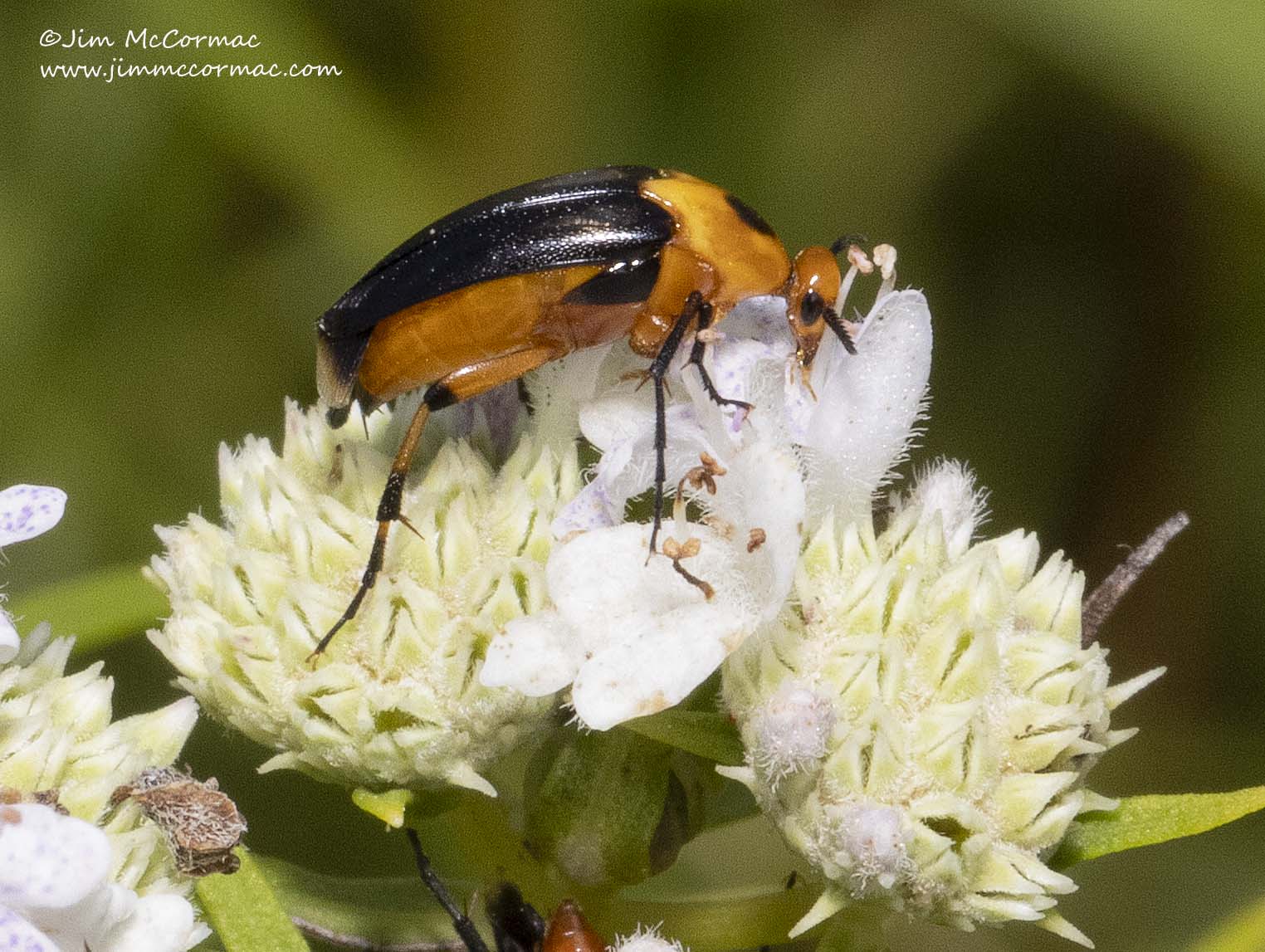 Many wasps also are also important pollinators, and many of them are spectacular. This is a huge species of spider wasp known as Entypus unifasciatus. When not nectaring at flowers – rattlesnake-master in this case – the females hunt large wolf spiders. They square off with their formidable eight-legged prey, and soon sting the spider. Powerful neurotoxins are injected which nearly instantly paralyzes the victim. The wasp then drags it to a burrow and encrypts it along with some eggs. When the wasp grubs hatch, they enjoy fresh spider meat. 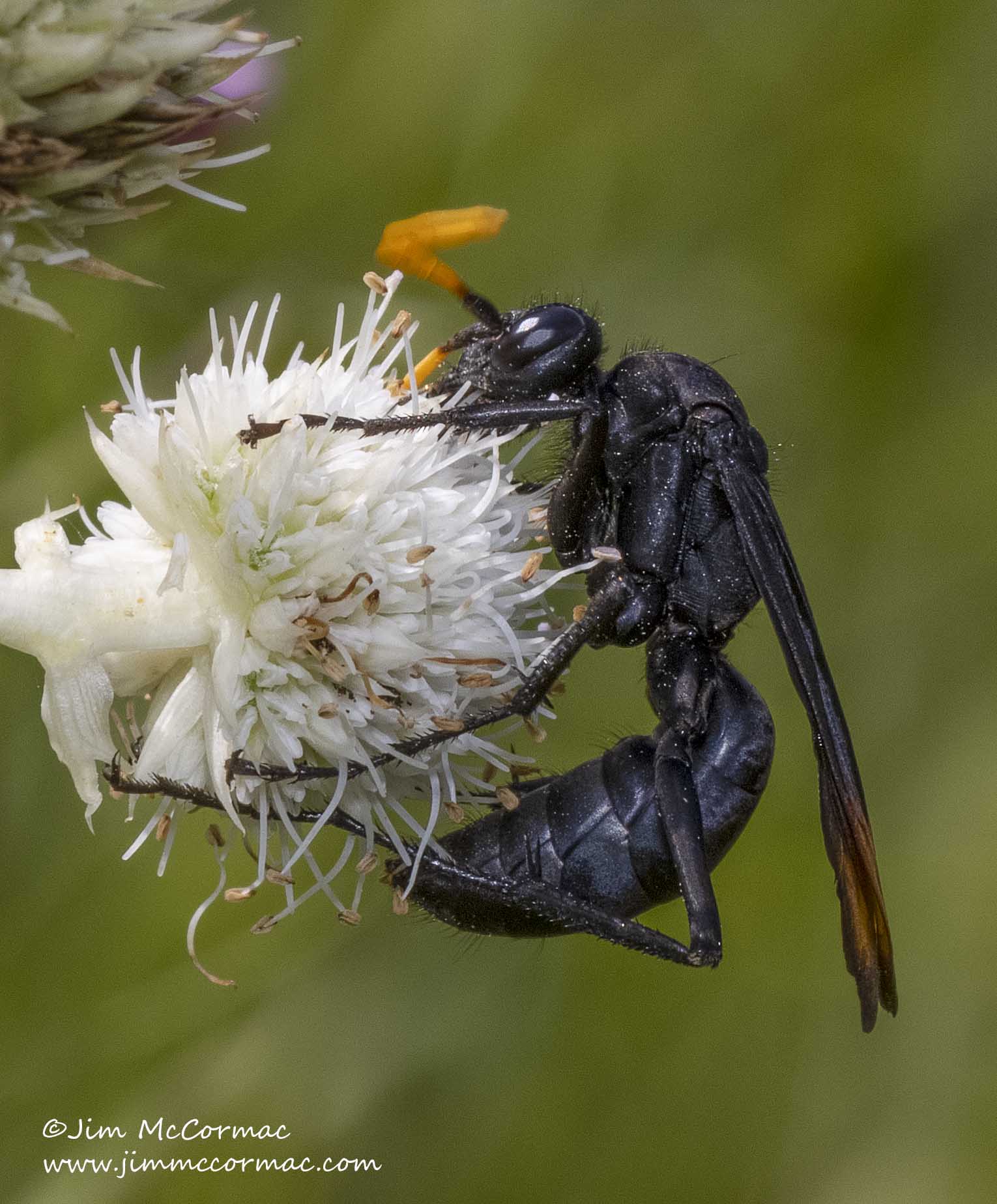 This insect greatly resembles a spider wasp and is just as large. But it is a fly, a mydas fly (Mydas tibialis) to be exact. It even frequents the same flowers as the spider wasps. The fly world is awash in remarkable mimicry. Looking like an insect that can pack a venomous punch, such as a bee or wasp, presumably dissuades birds from trying for a meal. 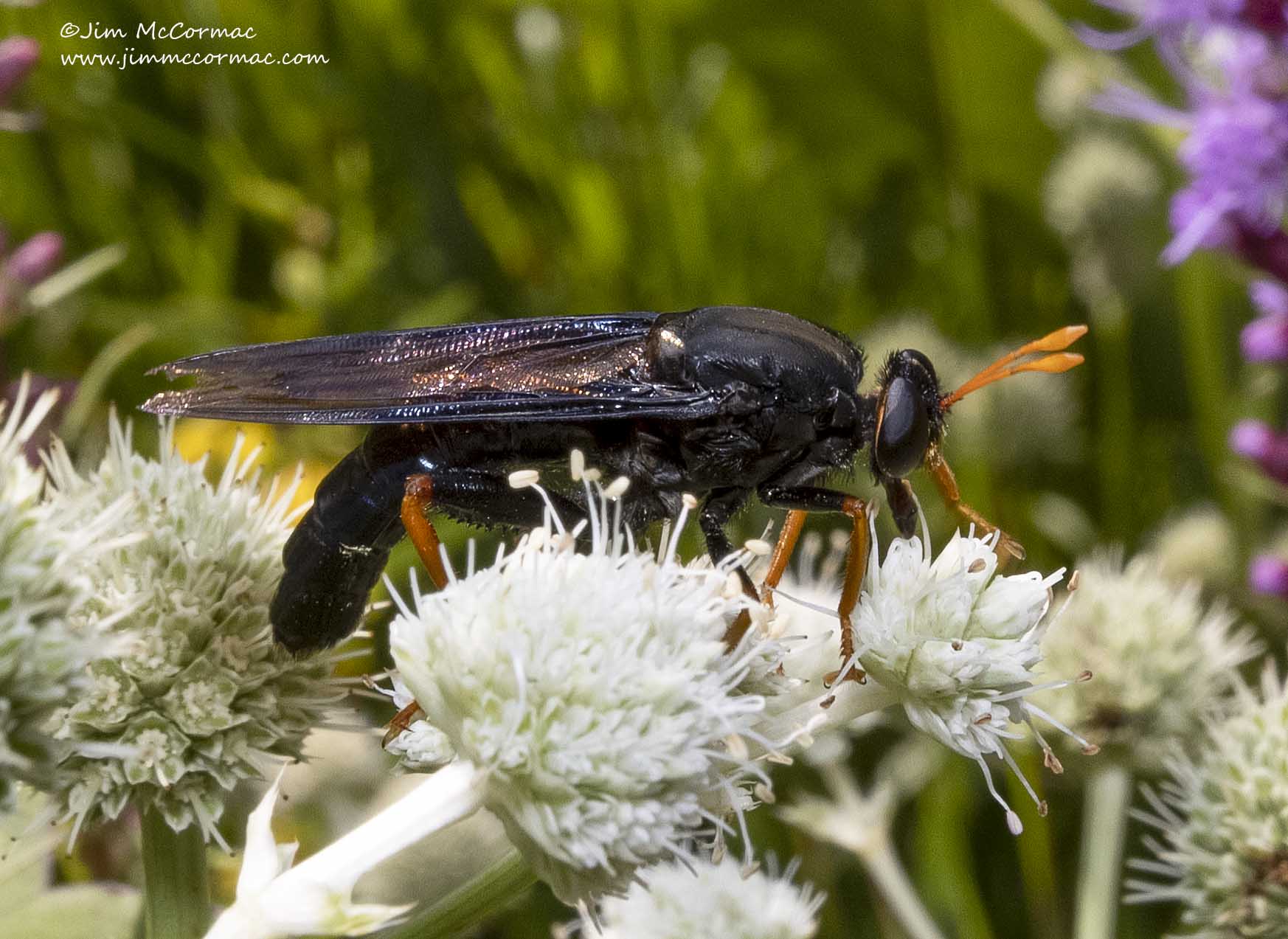 A tachinid fly (Juriniopsis adusta) rests and grooms on a leaf in between nectar forays. Tachinid flies are parasitoids, and this one preys on the caterpillars of certain butterflies and moths. Parasitoids generally kill their hosts, and in grisly fashion. In this case, eggs are deposited on the caterpillar, the maggots soon hatch, bore into the victim and ultimately eat it alive from within. Horrific as this may seem, tachinids are vital to ecological balance (other than those species unwisely introduced for “biological control”) and serve as important pollinators. 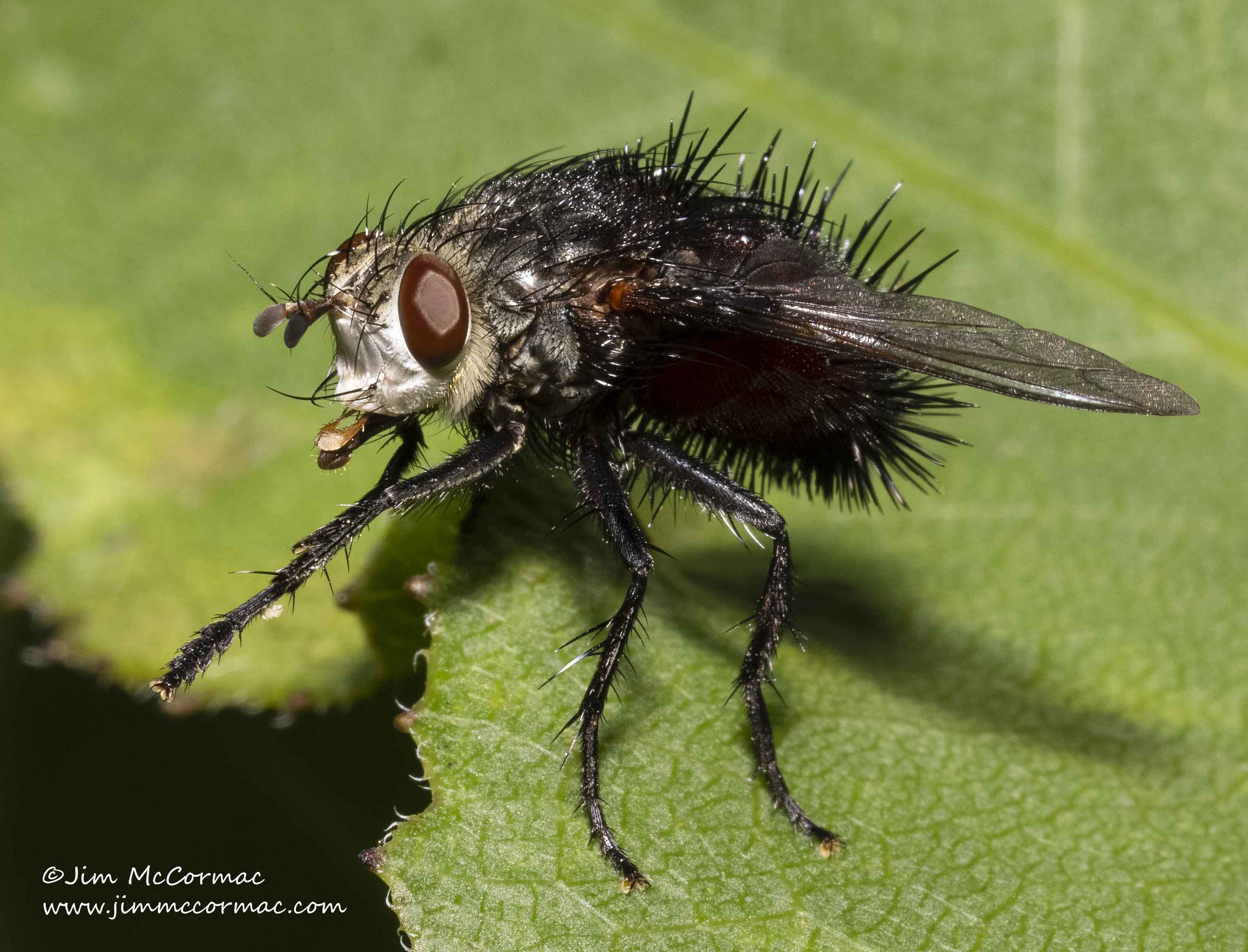 The “lesser” bugs fuel a fascinating web of predation, and of the insect predators this may be king. It is a cannibal fly (Promachus hinei), and it might be thought of as the peregrine falcon of the fly world. Cannibal flies have been documented taking prey the size of hummingbirds, although they more typically stick to their invertebrate brethren. This one has a European honey bee (Apis mellifera) in its grasp. They often take large bumble bees, and I have seen them grab big wasps with potent stings. We can be grateful that cannibal flies are not the size of sandhill cranes, or our field trips could become quite perilous. 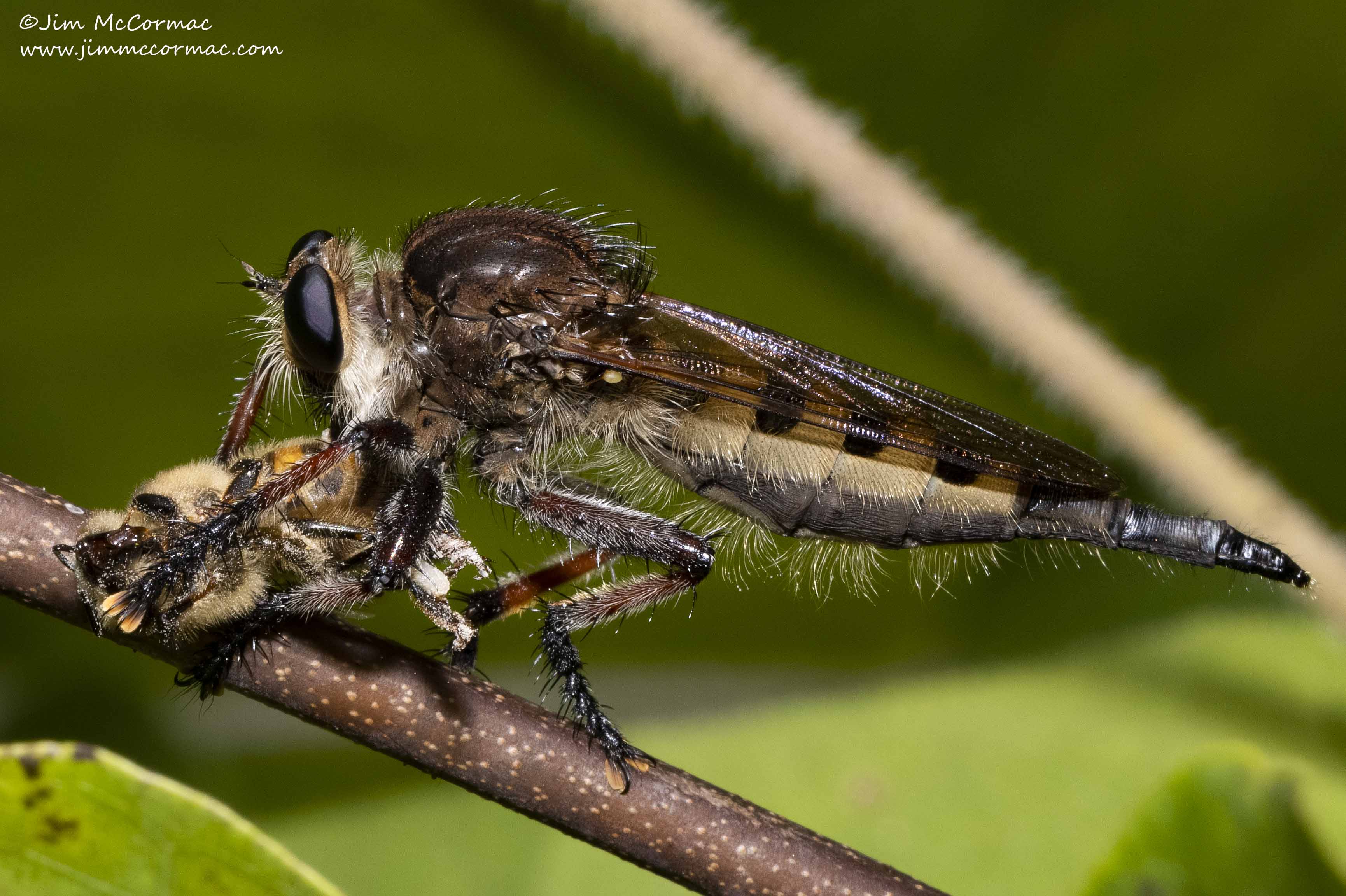