Today’s photos—mostly orthopterans—come from regular Mark Sturtevant, whose IDs, links, and captions are indented. You can enlarge the photos by clicking on them.

Here we continue with pictures of a big Chinese mantis (Tenodera sinensis), followed by pictures from a recent summer vacation. All were taken in 2019, which seems a lifetime ago now.

The first picture is a kind of poster that I made for fun, showing the dramatic changes in mantis eyes between day and night. By day, the eyes are pigmented to match their general camouflage. The dark spot on the eyes is called the pseudopupil, and it is really a sort of optical illusion of compound eyes. As a mantis turns its head, the pseudopupils always seem to be looking at you! But at night the surface pigments in the eyes migrate away to let in more light. Then, mantis eyes turn black and mysterious. 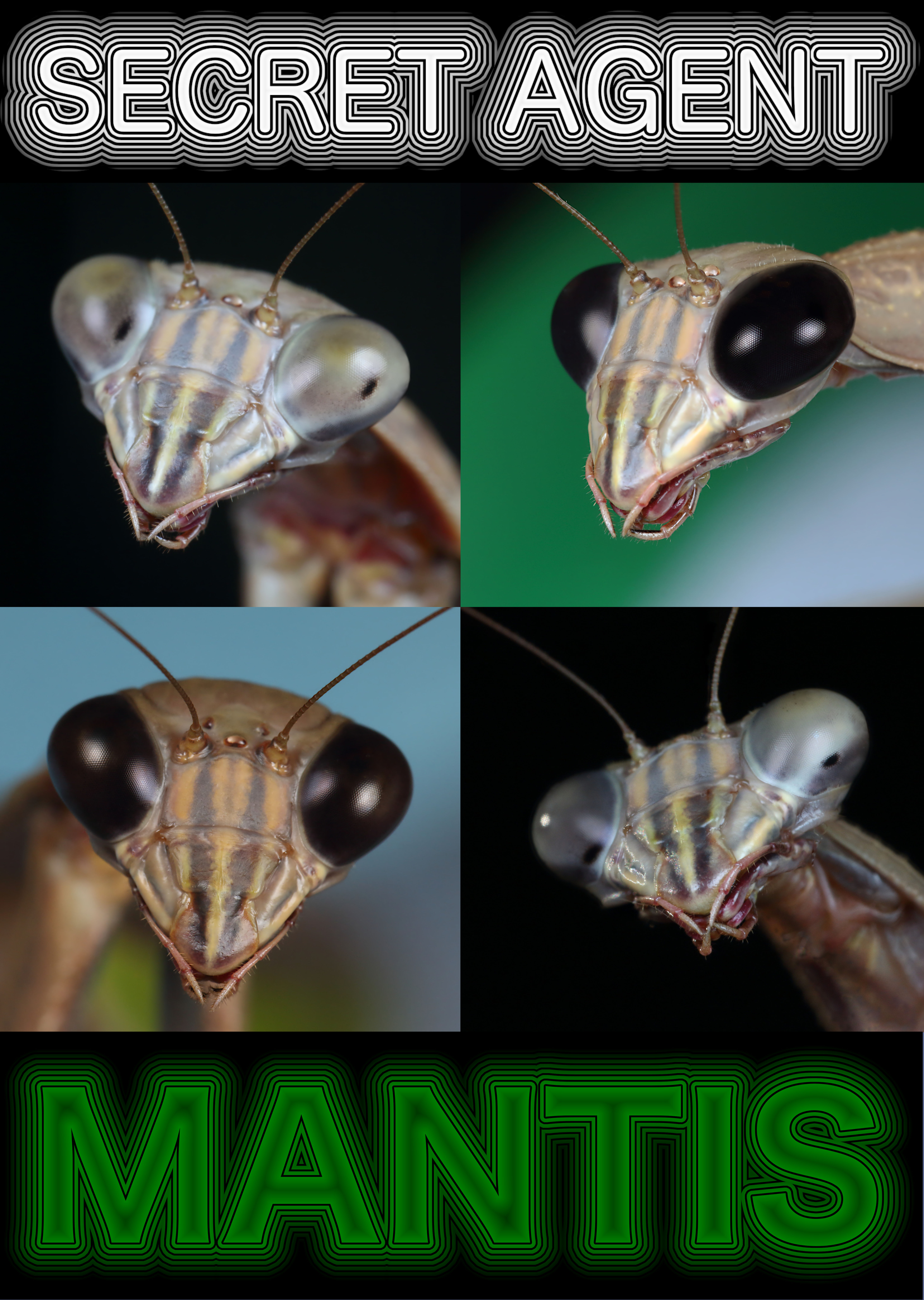 Next is a posed picture taken shortly before this mantis was released. I always get a bit attached to these huge and interesting insects when I keep one for a few days. But upon release, they of course are completely indifferent to our bond, and they don’t even look back (*sniff*). 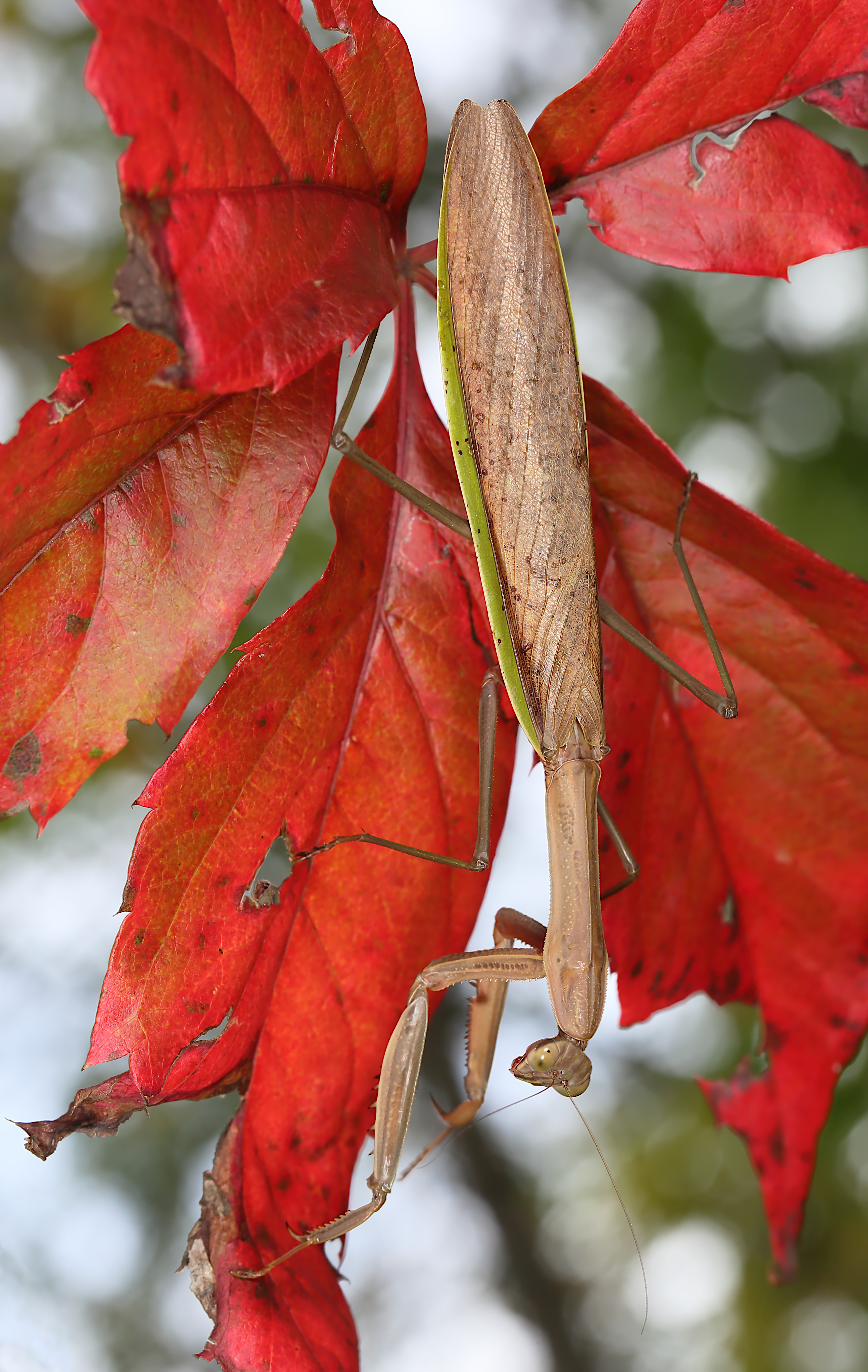 The mantis shown next is not the same one, but it conveys some idea of how big these insects can be. A Chinese mantis is commonly over 4 inches long. Although not native to the U.S., they are our largest species. 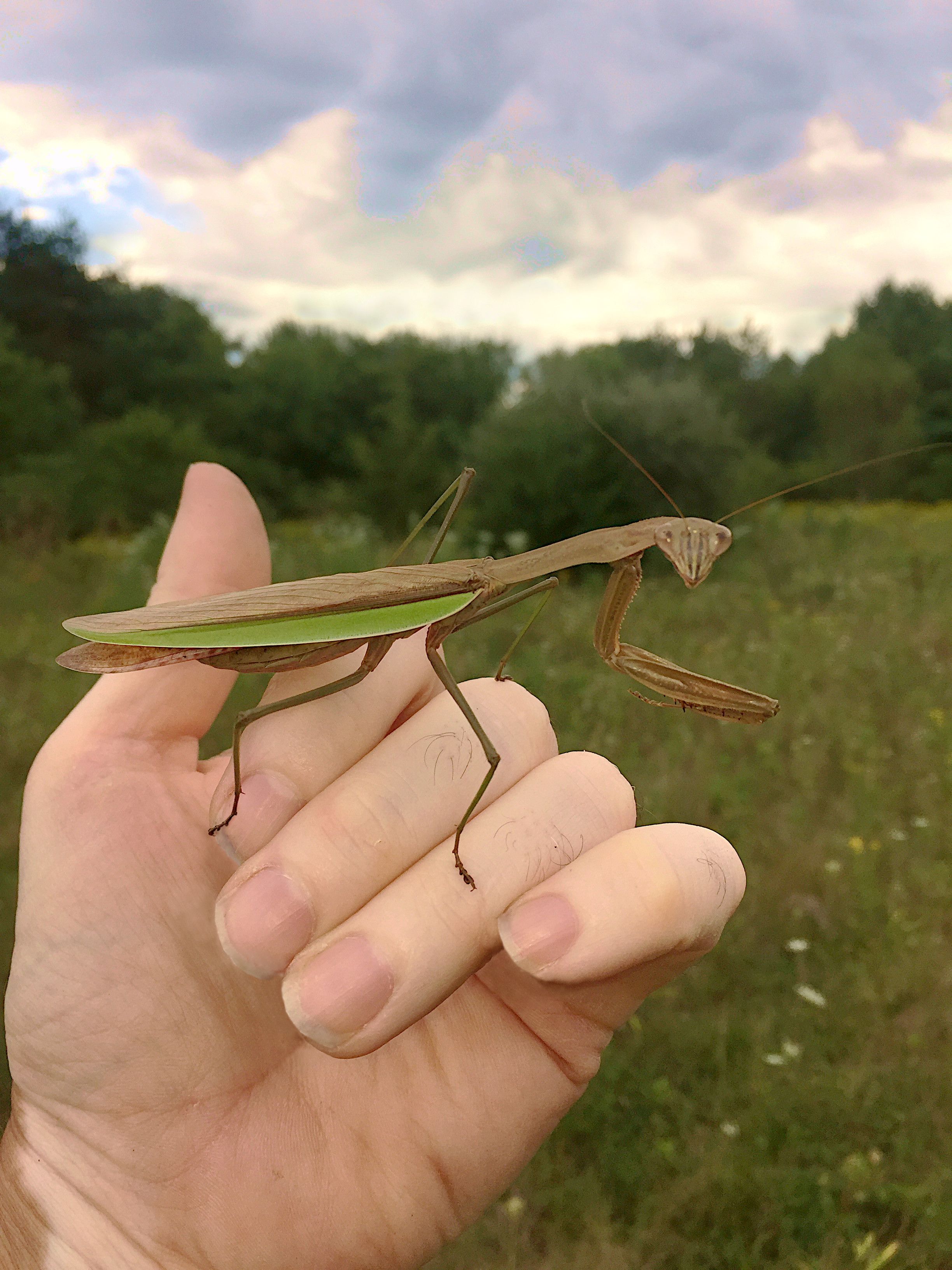 Next up are more pictures from a vacation in the Upper Peninsula of Michigan. For my last outing with the cameras, I referred to a detailed map that showed the many remote back roads and trails. I selected a site that was a long drive from the cabin, as it offered the possibility of getting to a river (dragonflies!). It was a good thing to have the paper map since cellphone access soon dropped out during the drive, with miles still to go through many left and right turns on unmarked single-lane dirt roads. Before we left for vacation, a very close friend of ours named Ali told me to be careful about going off the grid on my own as there is a significant bear population in the U.P. This conversation comes up later.

I eventually reached the intended hiking trail, and this led through a large field and then into woods. Both familiar and new insects were abundant.

First up is one of the many annual cicadas that were hanging everywhere on the tall weeds. It is hard to know the species exactly, but it does look like Neotibicen canicularis. The sound of their singing was deafening. 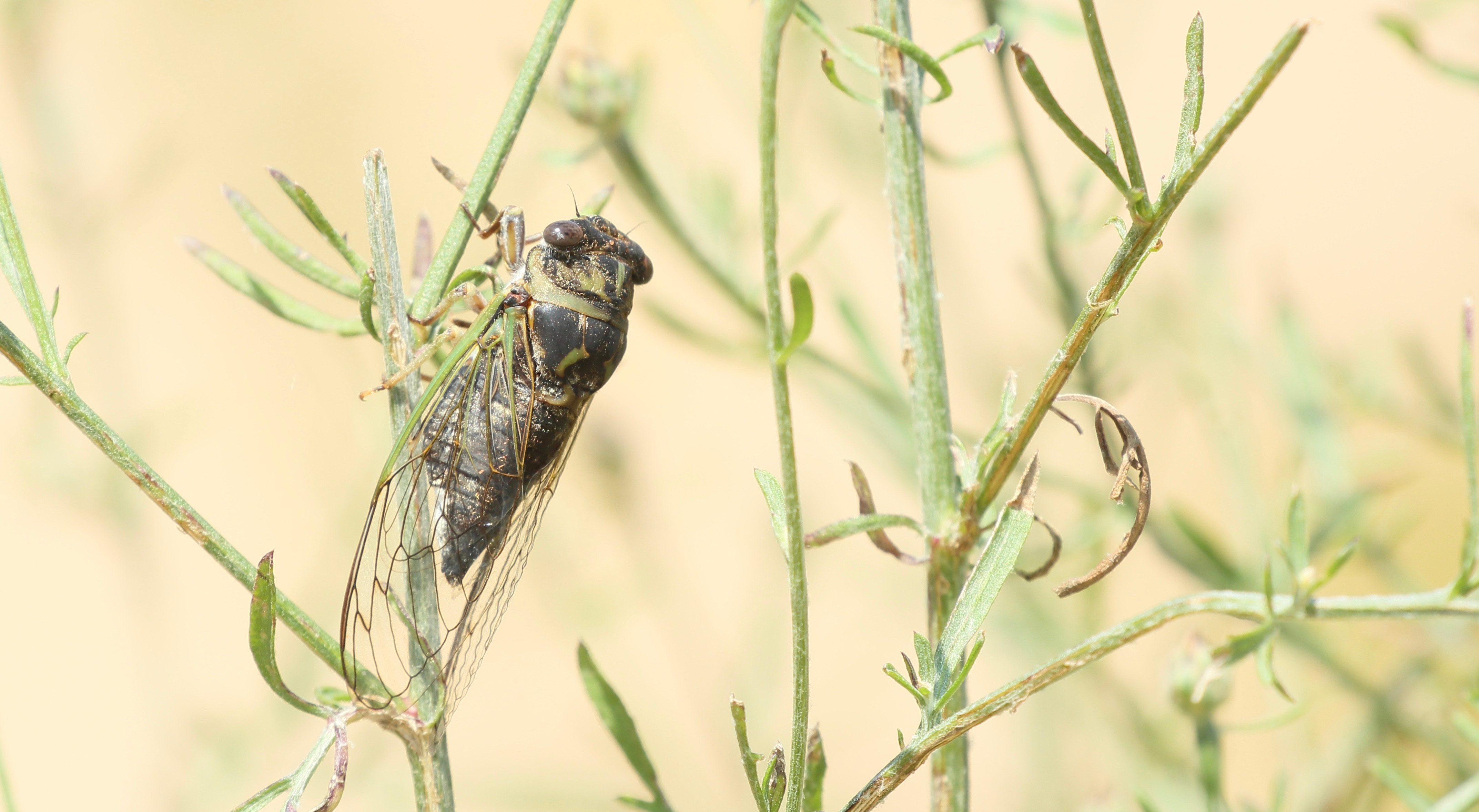 Numerous large robber flies were also flitting about. I had no trouble getting pictures of males like this one, as they were completely absorbed in keeping an eye out for females. I suggest they are in the genus Promachus. 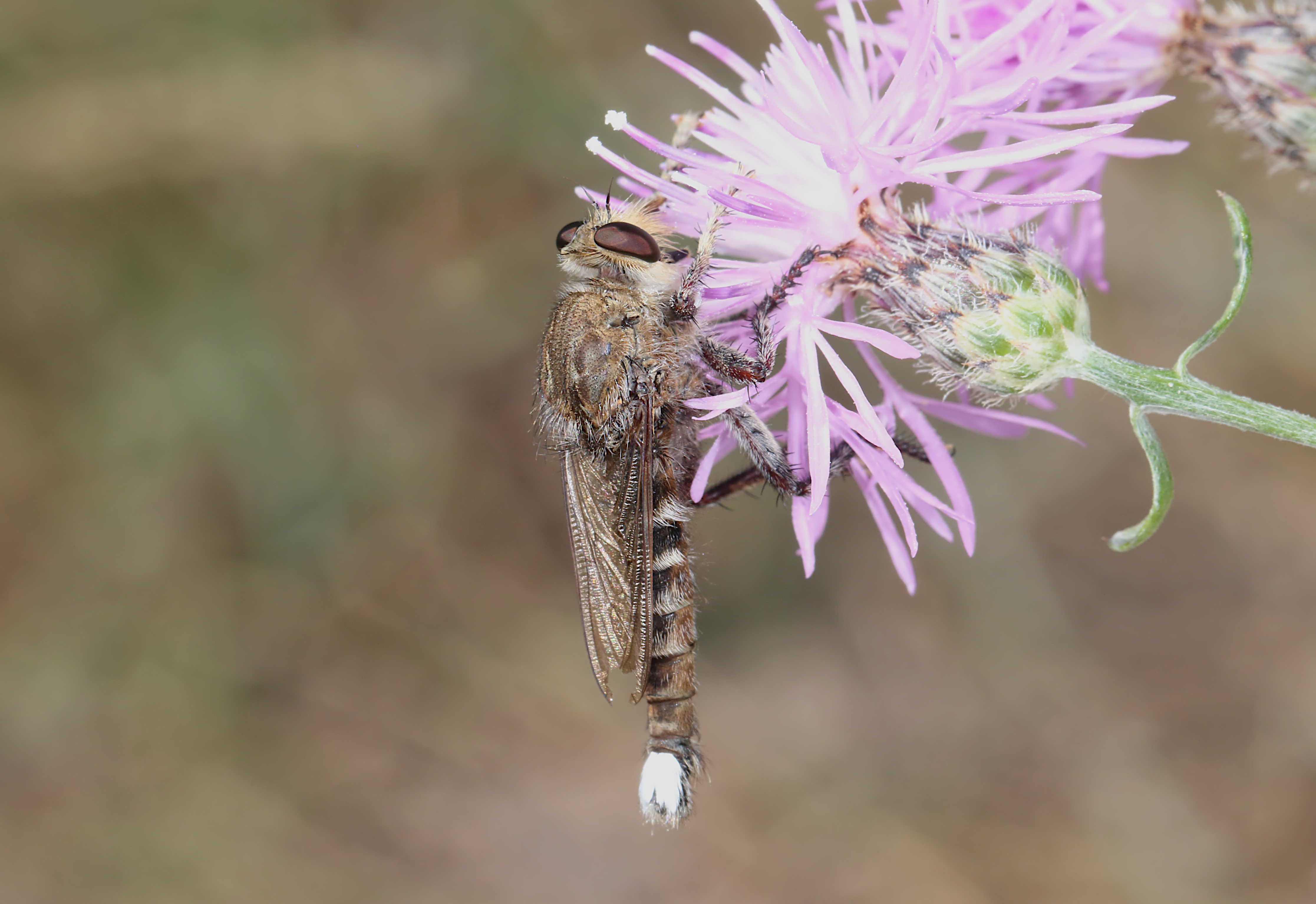 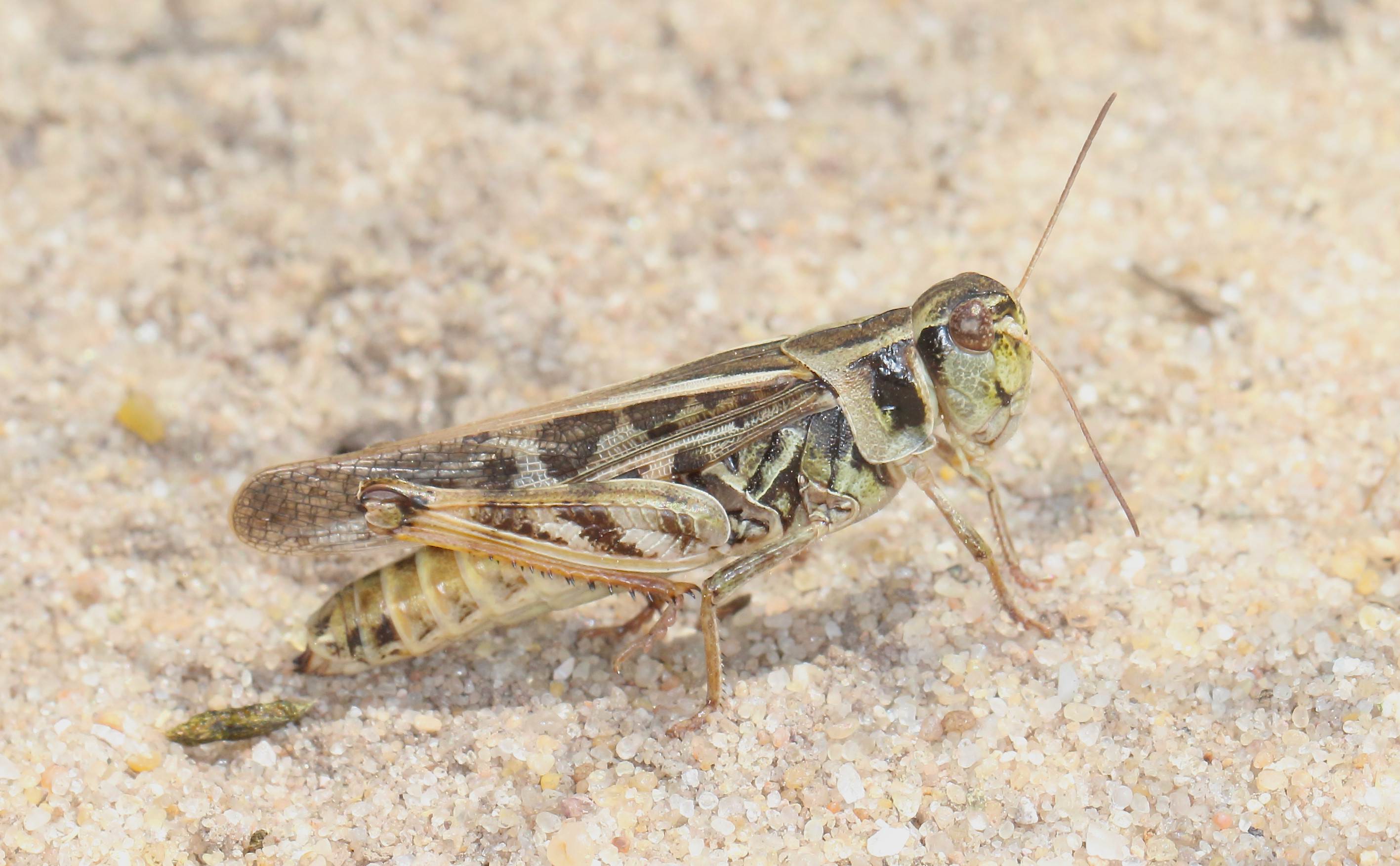 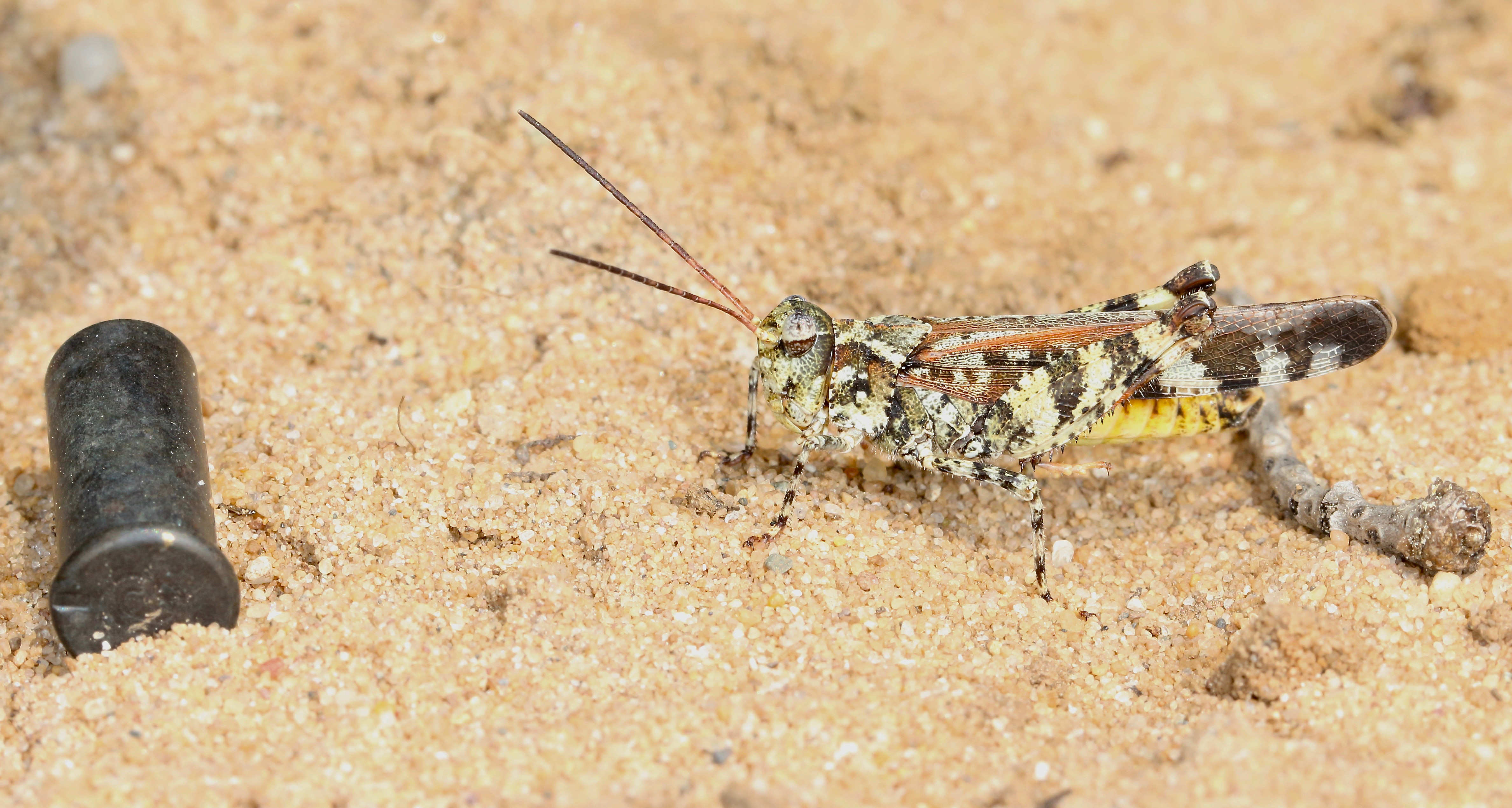 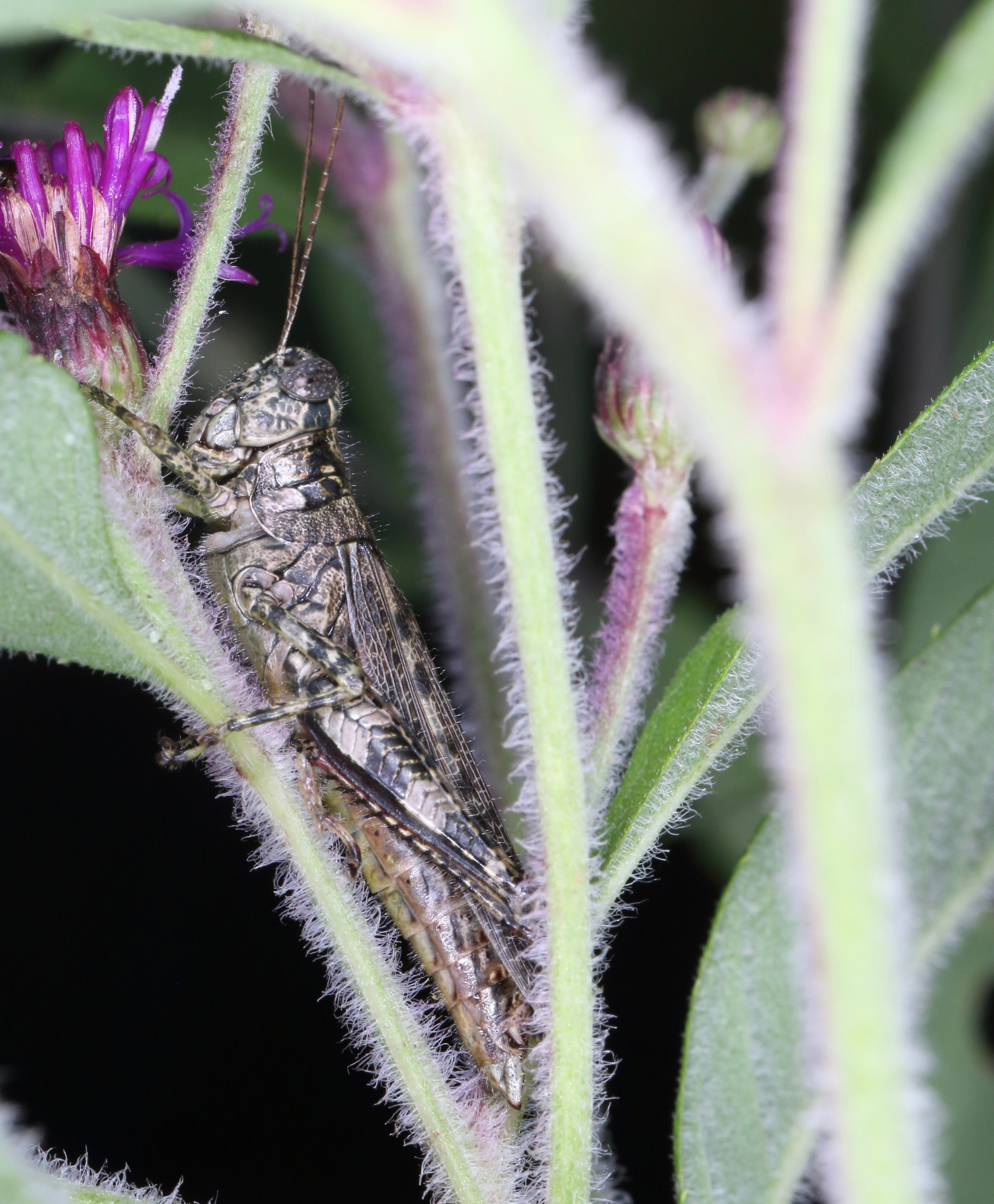 More grasshoppers, as the weeds were thick with them. A marsh meadow grasshopper (Chorthippus curtipennis) is shown next. This is a member of the slant-faced subfamily. 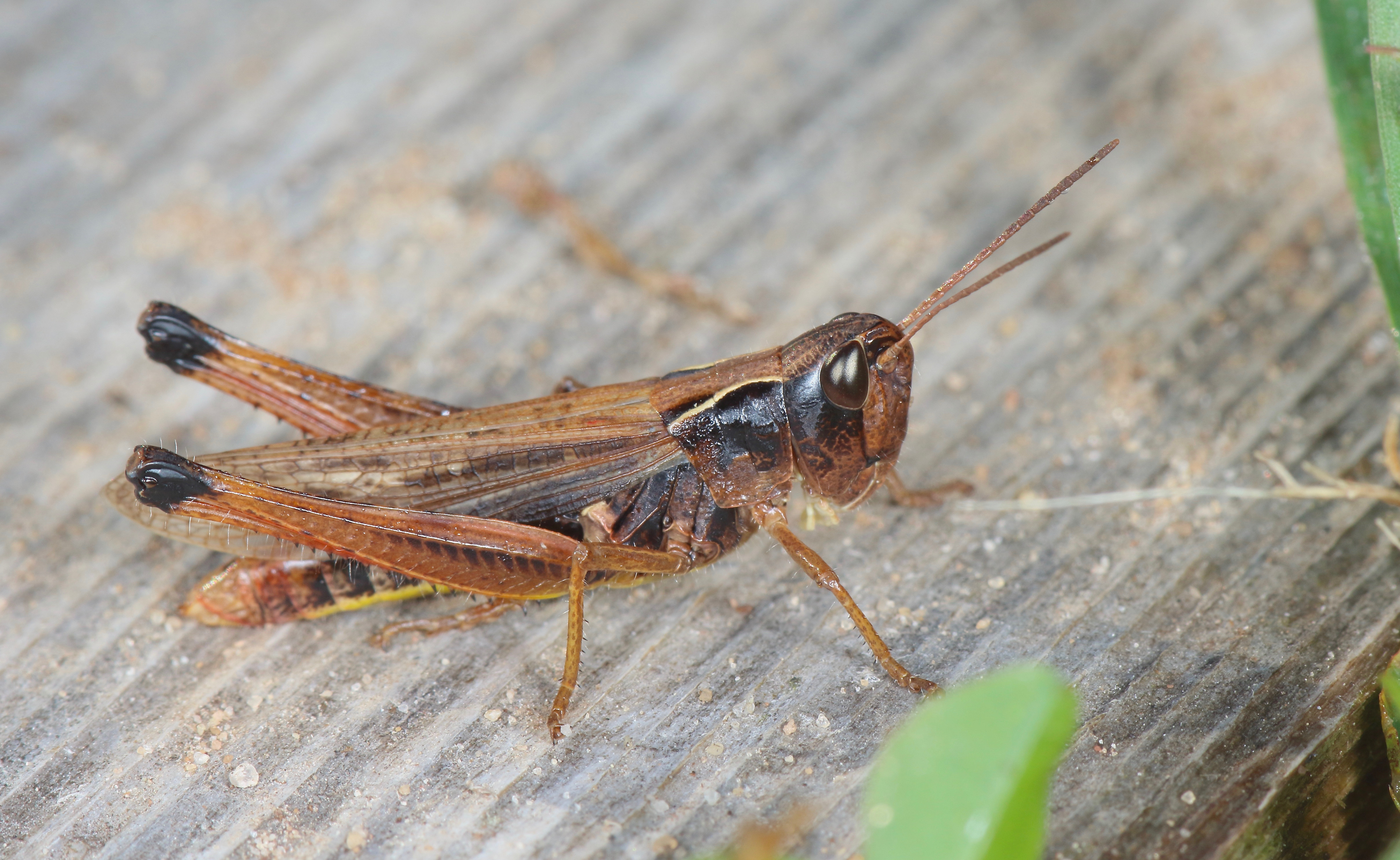 Finally, in the shadier areas near the approaching forest were many two-striped grasshoppers (Melanoplus bivittatus). These are again in the spur-throat subfamily. 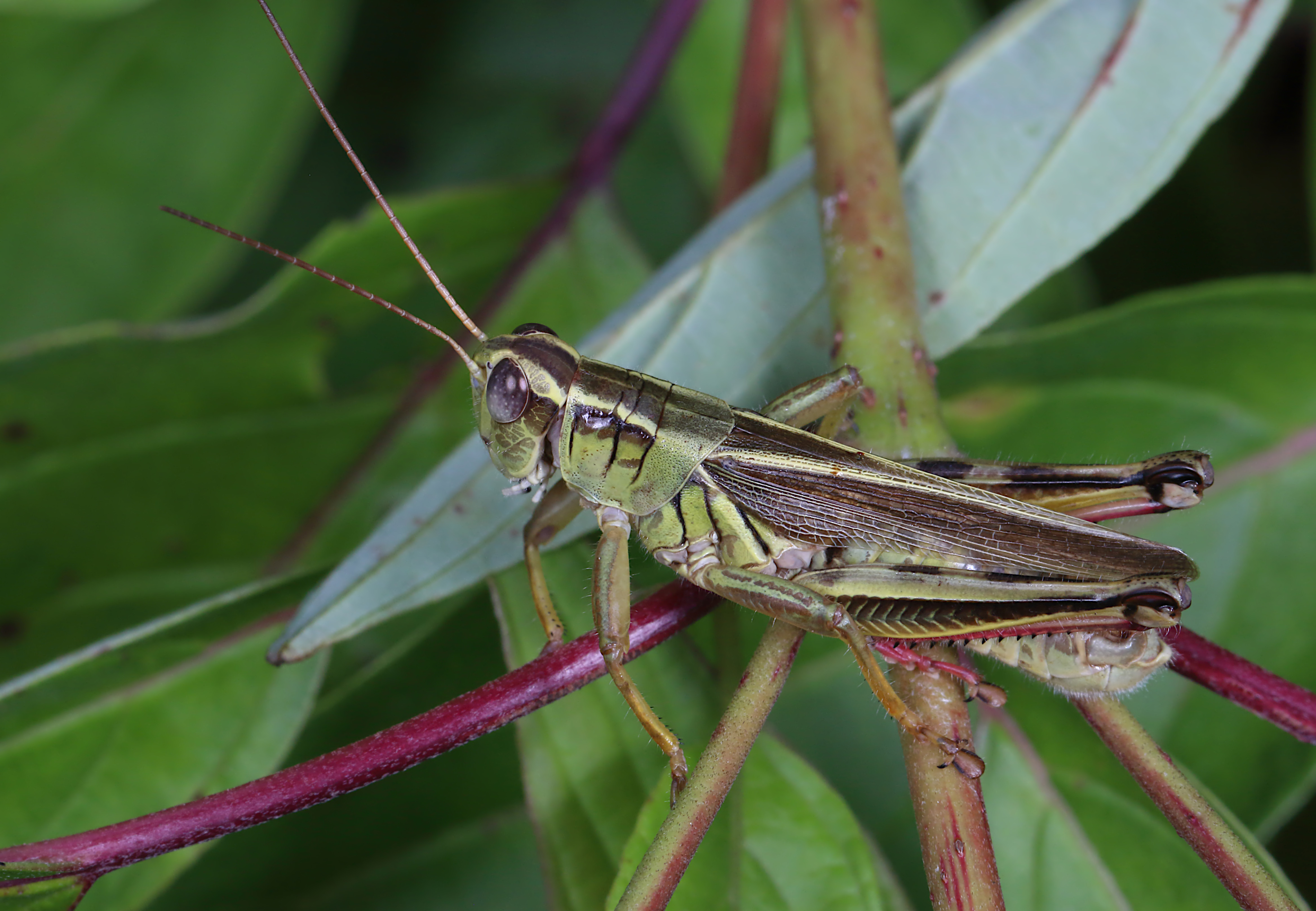 Ahead loomed the dark forest, with enormous trees and a lush undergrowth of tall ferns. The trail, such as it was, narrowed considerably. The bright sunlight and cacophony of cicadas and Orthopterans quickly receded to be replaced by a starkly different environment.

After the forest entrance was far behind, there was little to find until a butterfly made a sudden appearance, flying in and out through the broken sunlight. My heart fairly leapt at the site since this was a butterfly known informally as a white admiral, and it is a bit legendary. Once given its own species name, it was soon discovered to be the same species as the red-spotted purple butterfly (Limenitis arthemis). The white admiral form is more common up north, while I am very familiar with the southern form that lacks the broad white markings. This made my entire vacation! 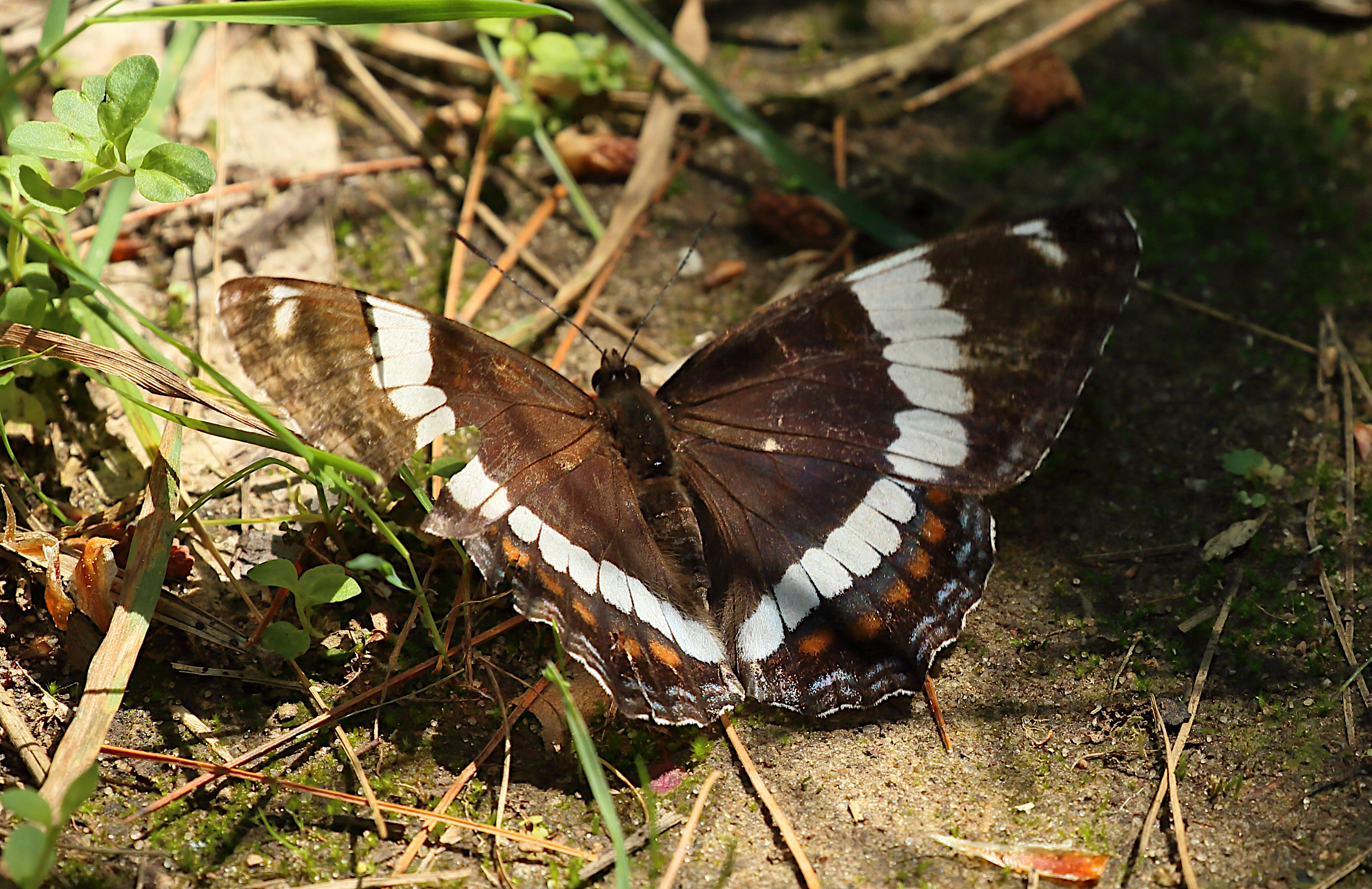 After the butterfly had gone, the trail began to go steeply downhill and I estimated there was at least another mile to go to the river. But gradually, the feeling of complete isolation finally caught up. I was utterly alone, surrounded by forest, and no one knew where I was. The nearest human would be miles away, and it was getting late in the afternoon. Ali’s words about bears then came back to me, and suddenly the looming trees did not seem friendly. Not safe and friendly at all!

I looked up to the trees and shouted “Dammit, Ali!!” and marched out of the forest and back to the car and civilization. To this day Ali still teases me about this story.