It’s time for an update on Botany Pond and its ducks, and I’ll add a note on the turtles.

The broods of Dorothy and Honey have left (14 total), but Honey is still here. She’s in molt, lacking any primary feathers, and is very irritable, spurning all duck food save mealworms and defrosted frozen corn, which I must toss to her one kernel at a time, as it sinks. She is clearly once again the alpha duck of Botany Pond after a long period of lying low and being timorous after she was repeatedly chased by a nasty drake.

We have two other broods remaining here: that of Shirley Rose, which hatched on May 30 with 12 babies.  One didn’t make it, and one was rehabbed after being attacked. The remaining ten are all grown now, and are leaving one by one. (We had seven this morning.)

The other brood is the tiny one (three ducklings) of Coco, which hatched on June 21, and they are thriving. They are now in the scruffy teenage stage, and we estimate they’ll be able to fly by the end of August, though they often hang around for a while after they can fly.

There are also about seven “itinerant” ducks, including Honey. We think that several of these are wannabee moms whose nests failed this year (we had at least four nests that had eggs but were either destroyed or didn’t produce offspring).  Several of these ducks are molting, and since they can’t fly for 2-4 weeks during the molt, we take care of them.

This week we’ll concentrate on Coco’s brood, since they’re young, and I’ll say a few words about the turtles, which appear to be mating and nesting by the pond for the first time.

Below: a video of the Duckmeister (me) arriving at the Pond with food for the gang. One bag is for me, the other for one of Team Duck. Shirley Rose’s brood of adults, newly minted ducks, are waiting for their lunch. My jeans are rolled up because they were irritating the lesions from swimmer’s itch that I got when I went into the pond to rescue 6 ducklings dumped there without a mom. The ducks know me and my food bags, and come running when I appear. Shirley Rose is to the right, supervising her brood.

Shirley Rose and her full brood of ten. Three of these babies have now departed for other places. They were a tight band and always stayed together. I think they’re a bit discombobulated now that they’ve lost some of their number and Mom isn’t with them all the time. 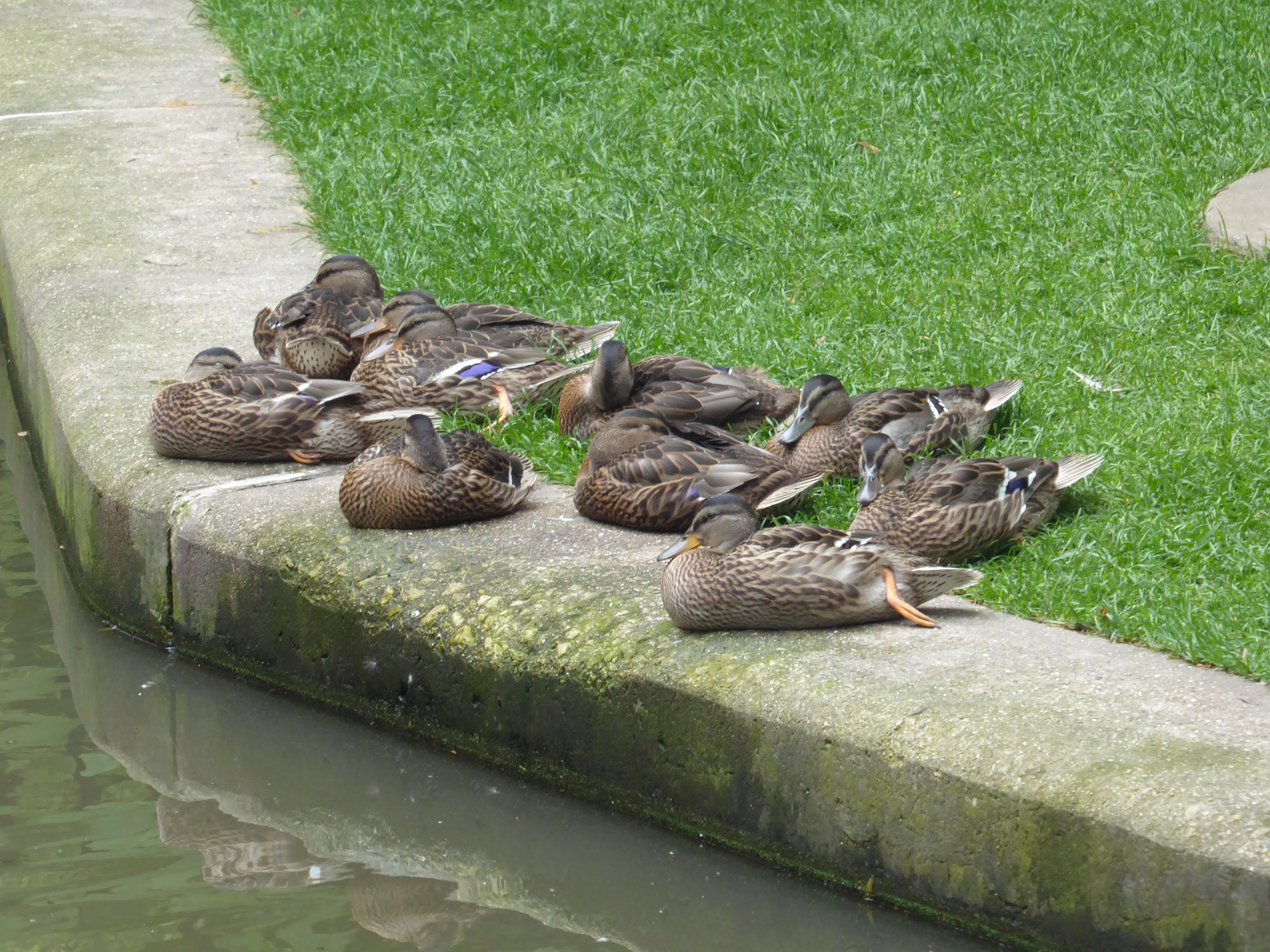 If they’re still hungry or want other treats besides duck pellets, they do what they normally do—dabble: 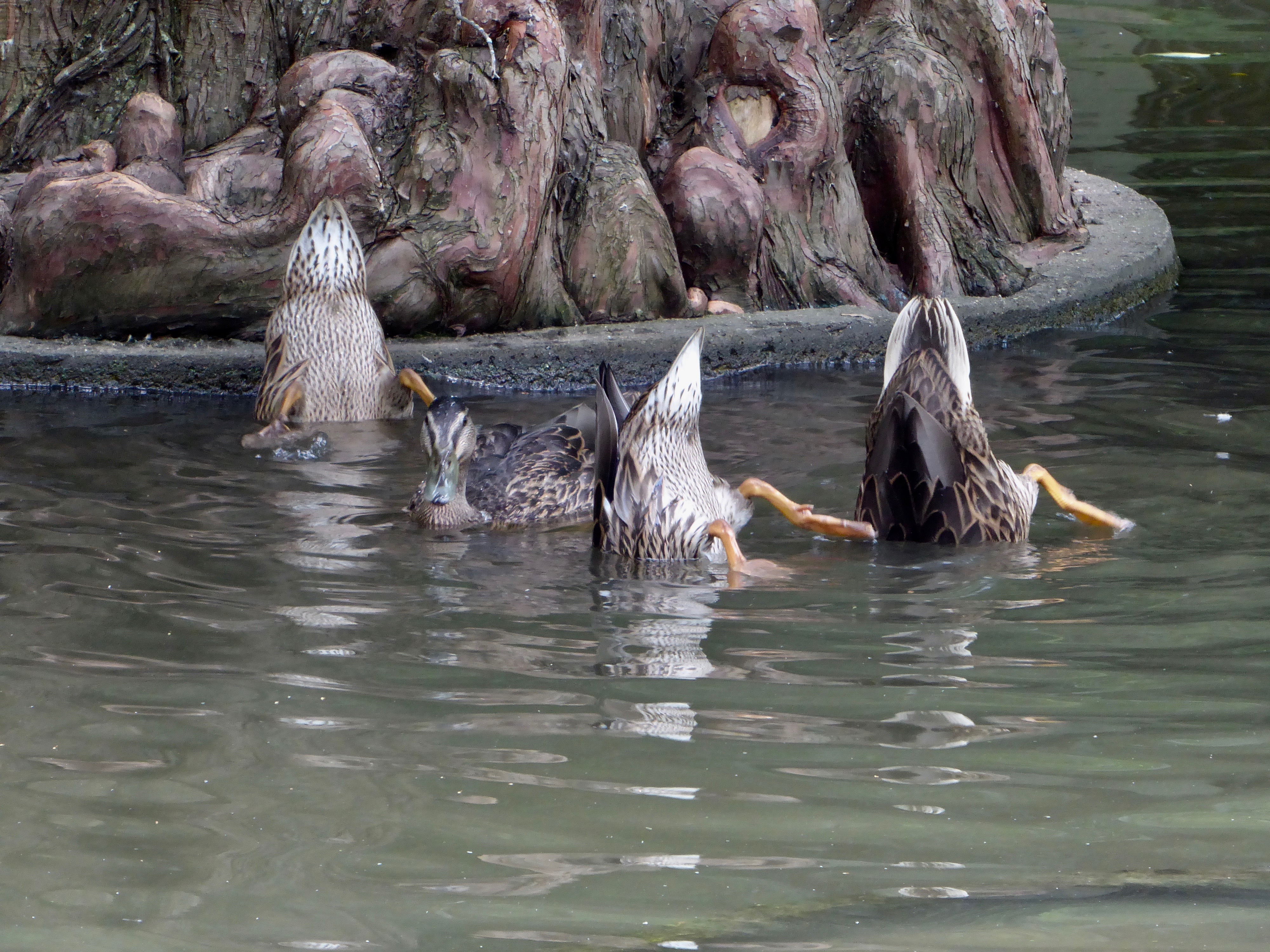 Coco’s babies have grown rapidly from fluffballs to scruffy ducklings. As of today, there’s very little down left on them.

Here they are not all that long ago: 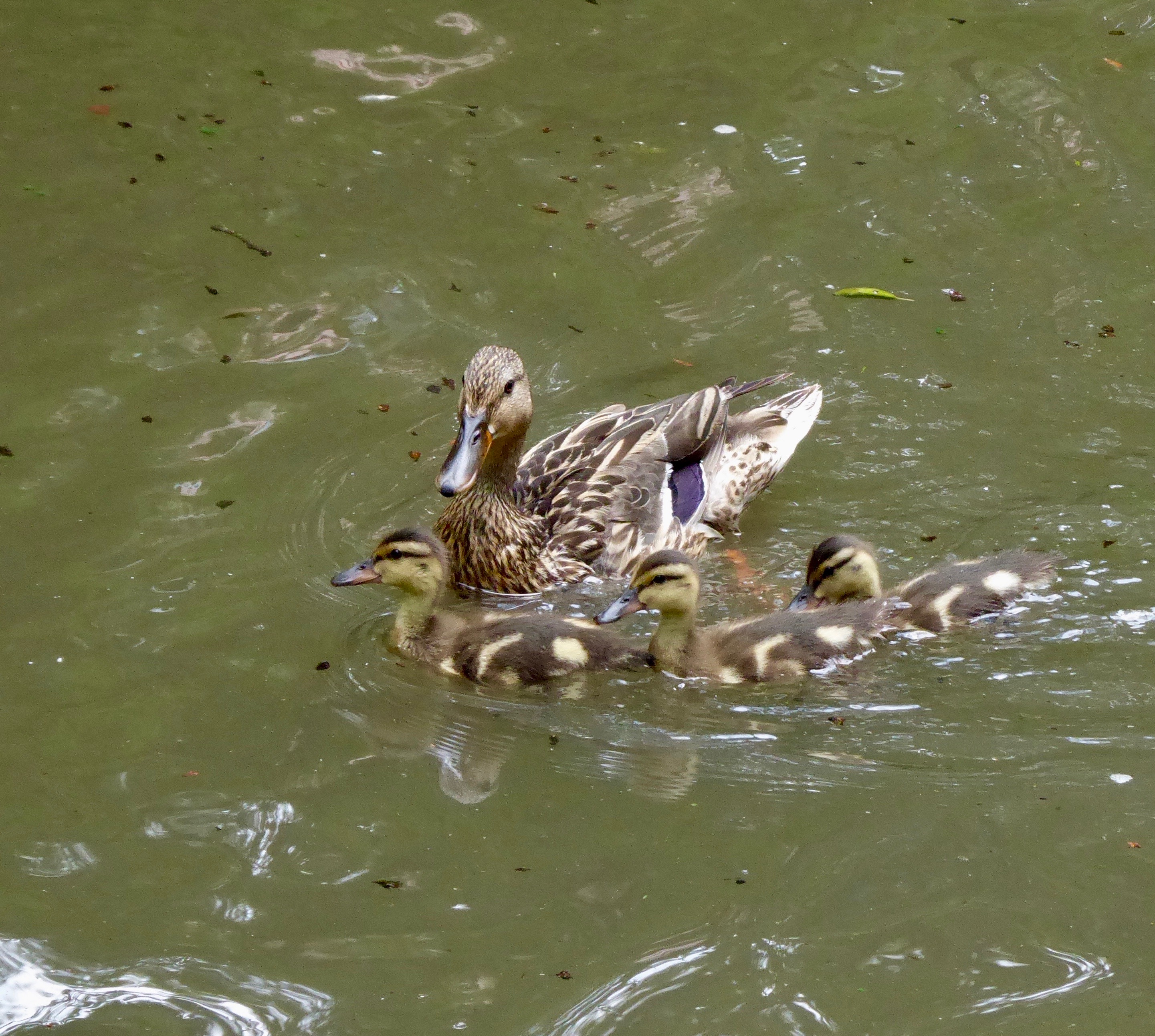 Going up the duck ramp (I’m proud of myself for having devised this, but it was built and bolted to the pond wall by the good people at Facilities). Coco is a great mother and is always supervising her brood, even letting them eat first before she touches a morself. 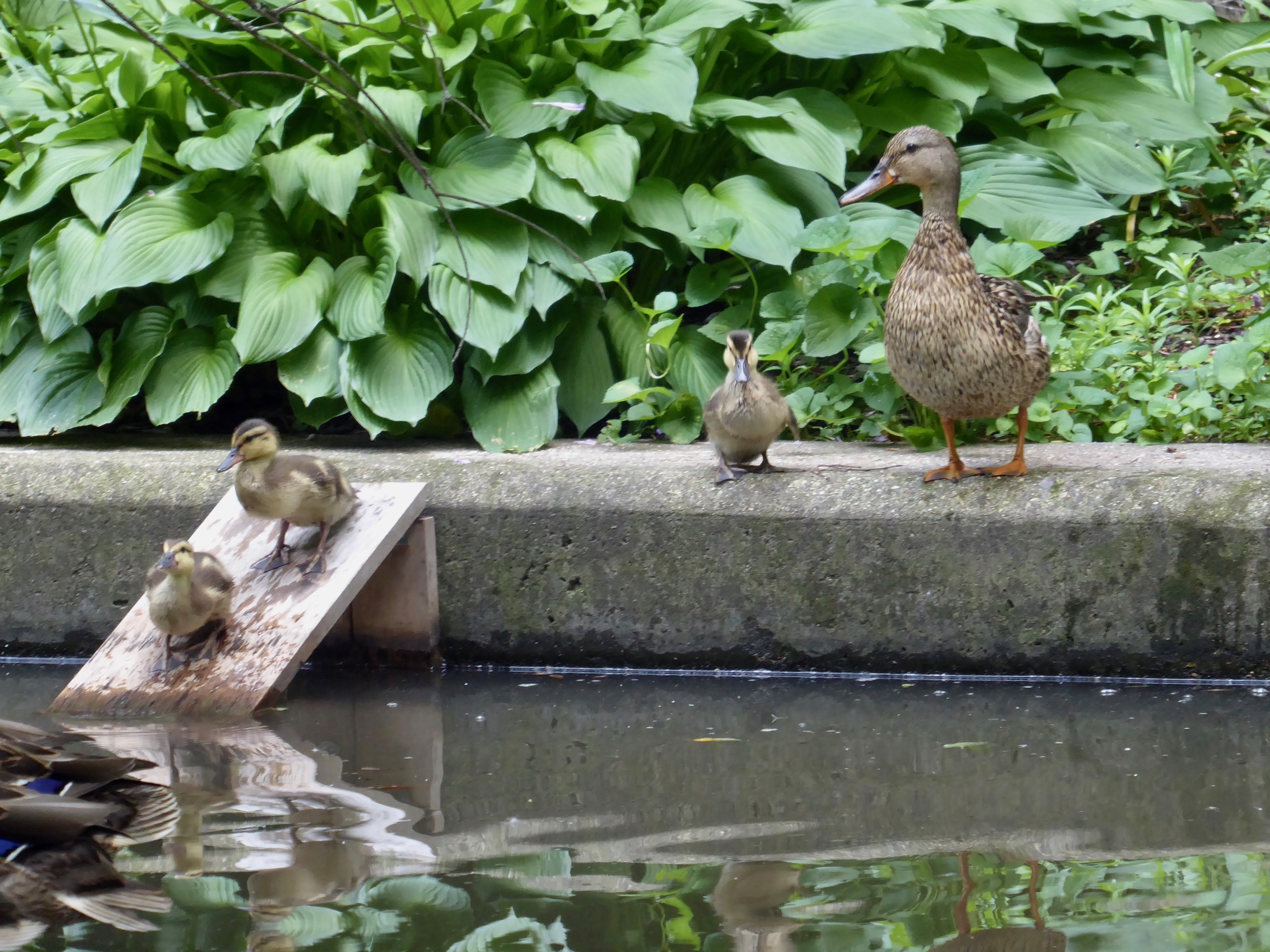 Napping on North Duck Island. Note the nictitating membranes over the eyes of the sleeping ducklings. 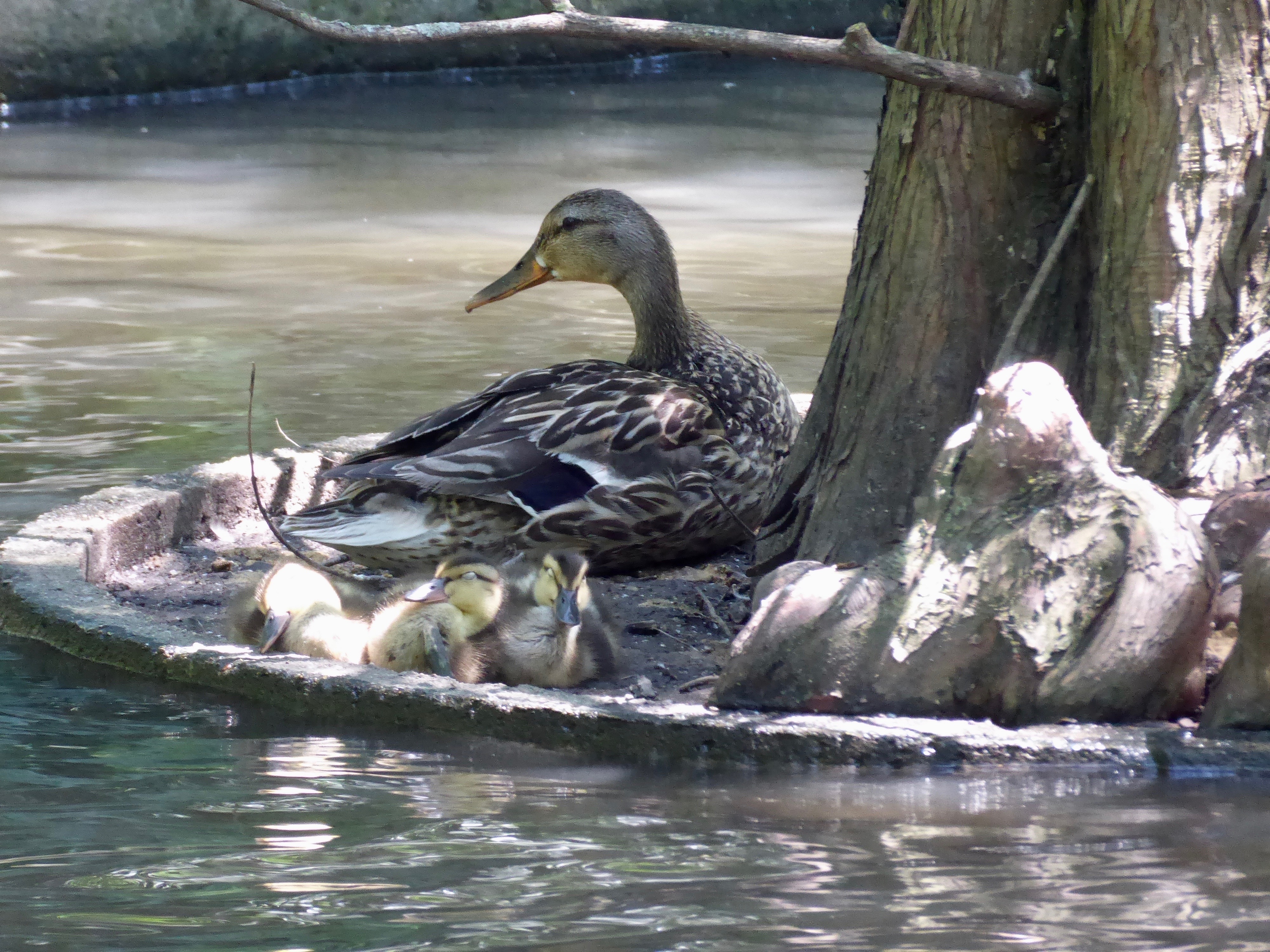 Coco is a very elegant hen with a long, graceful neck: 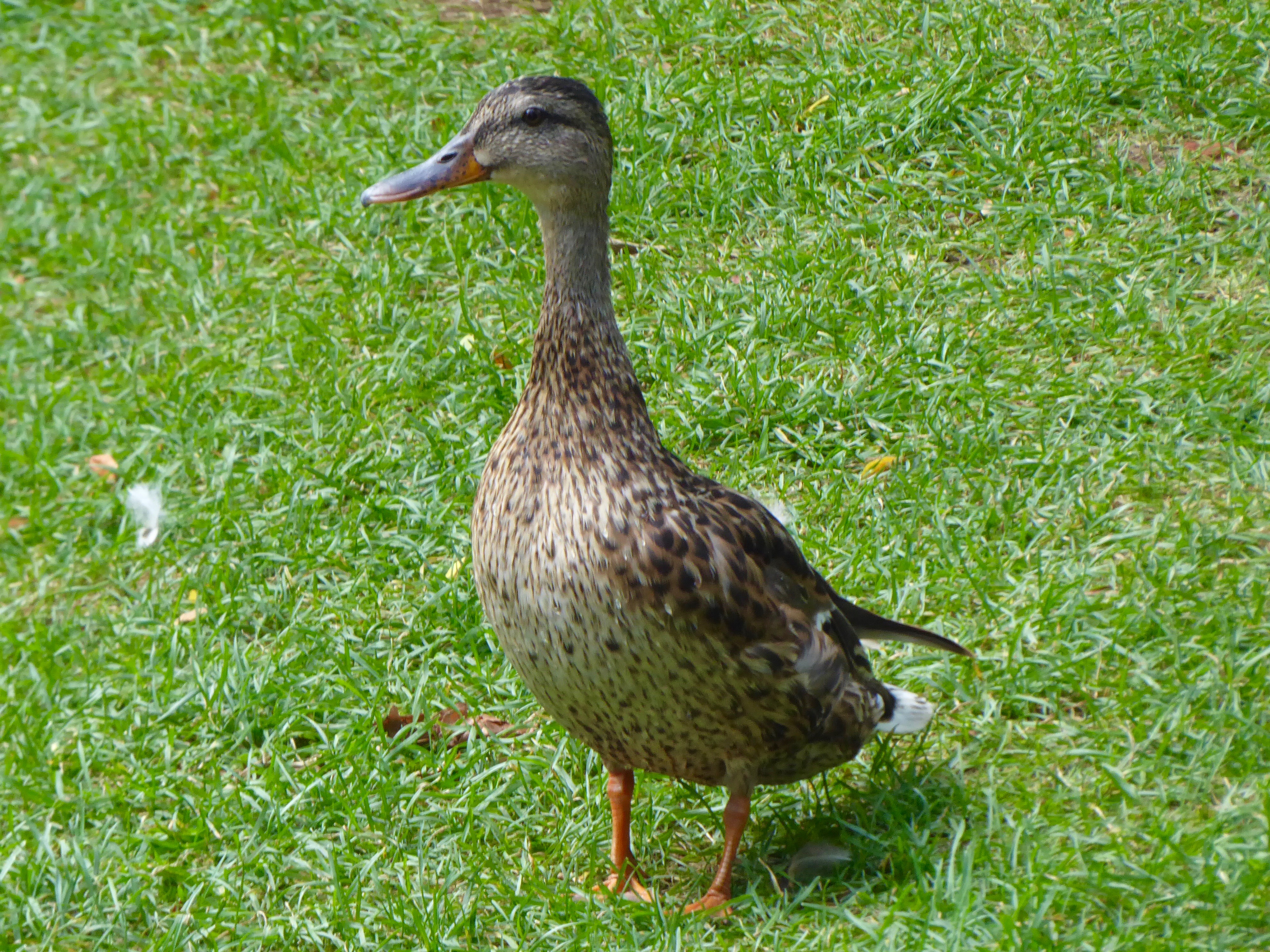 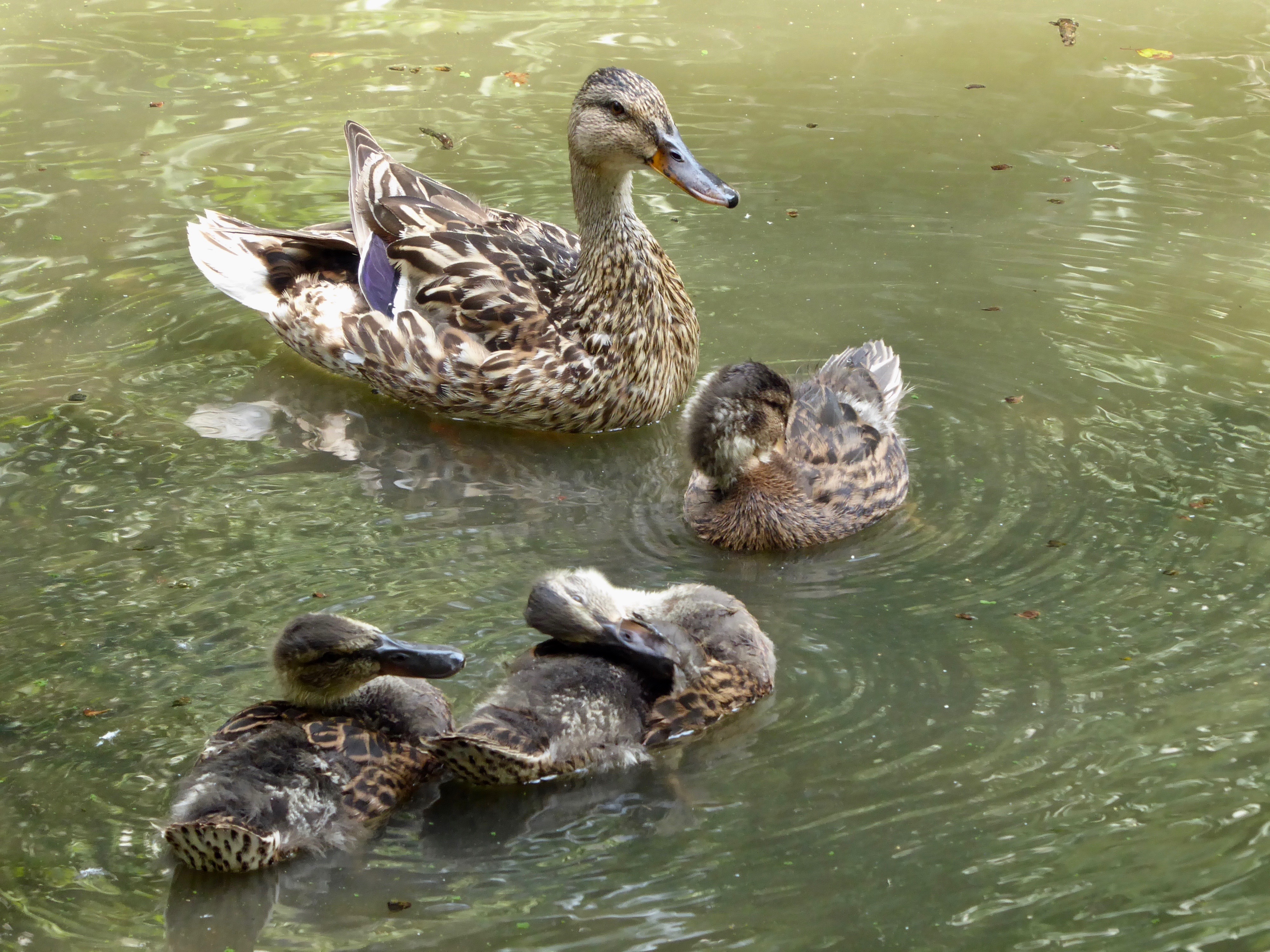 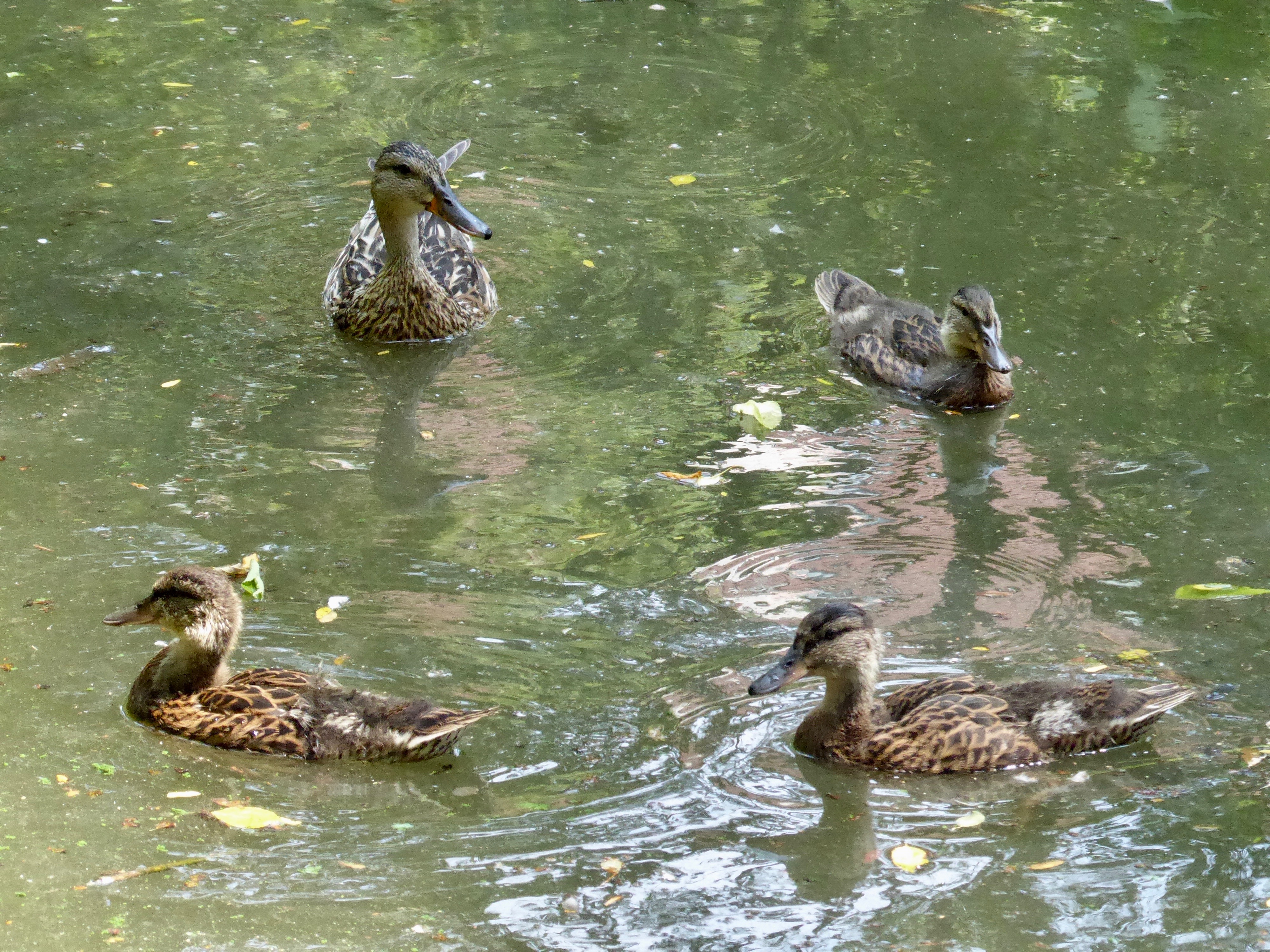 Here’s one having a neck and wing stretch: 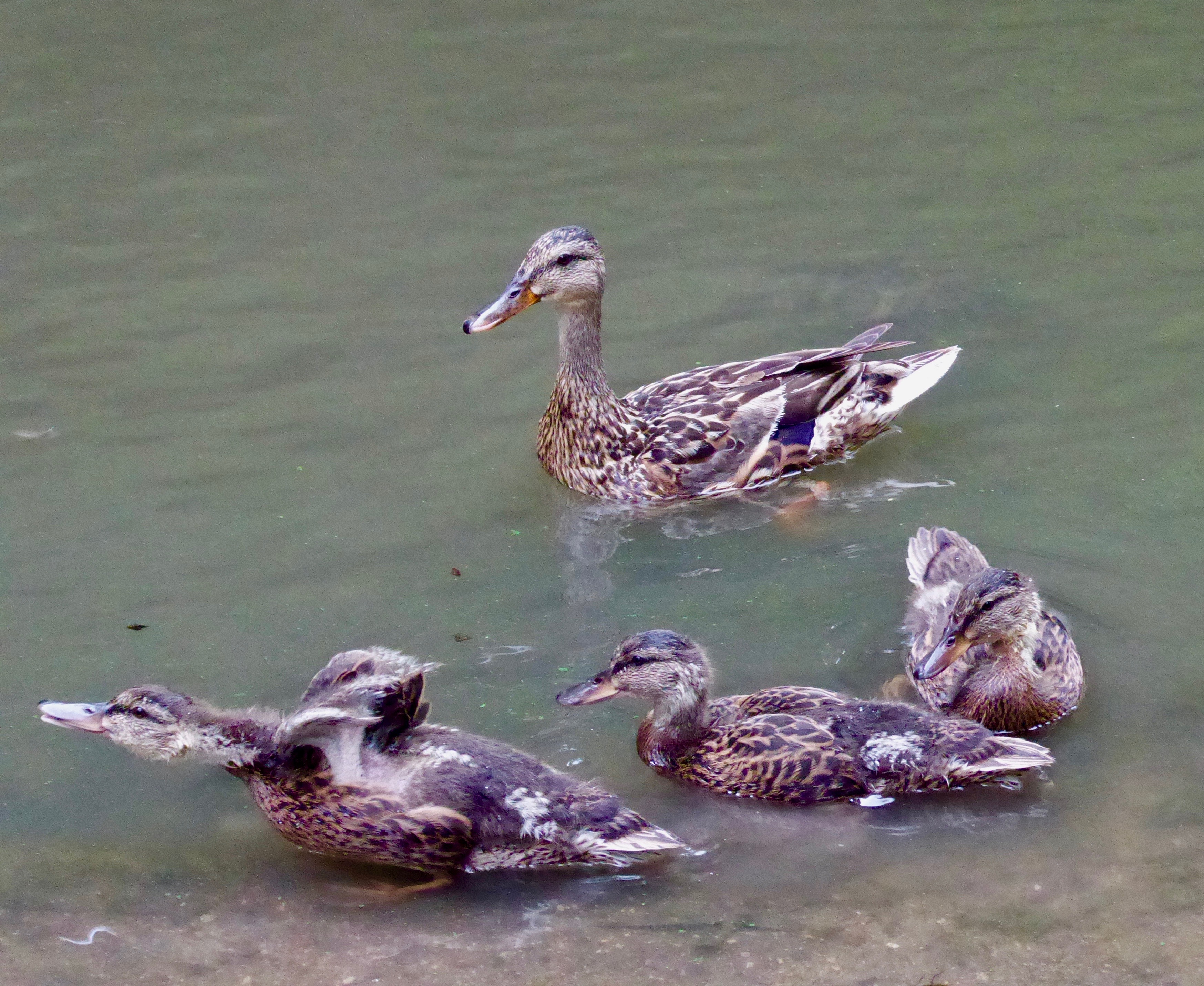 When they’re on the grass on “Duck Plaza”, I tossed them dry pellets to help teach them how to forage. Here’s a video of that “enrichment feeding,” though, truth be told, they learned it on their own—from watching Mom:

Oy, are they scruffy! Feathers plus down are not a lovely combination. 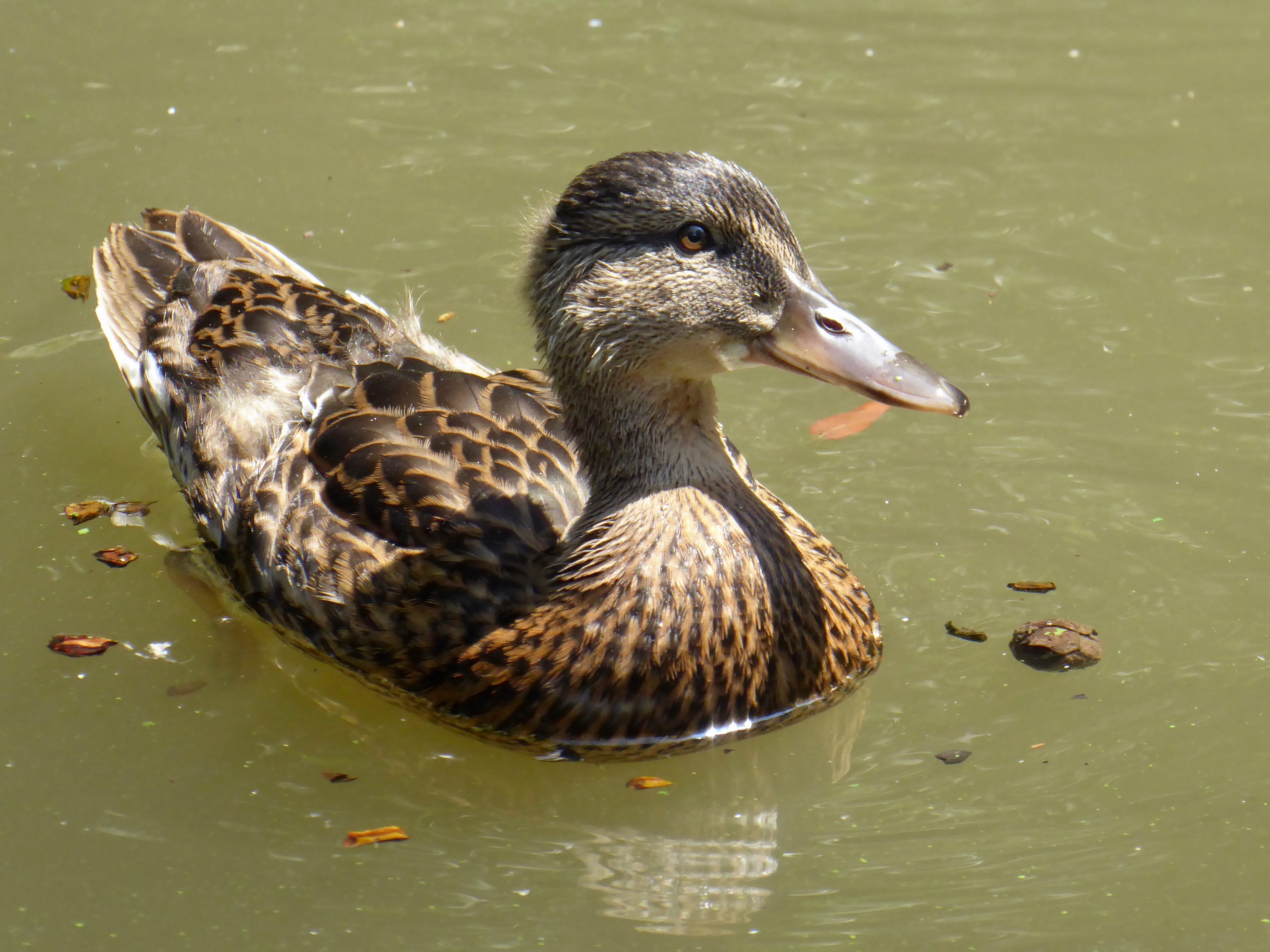 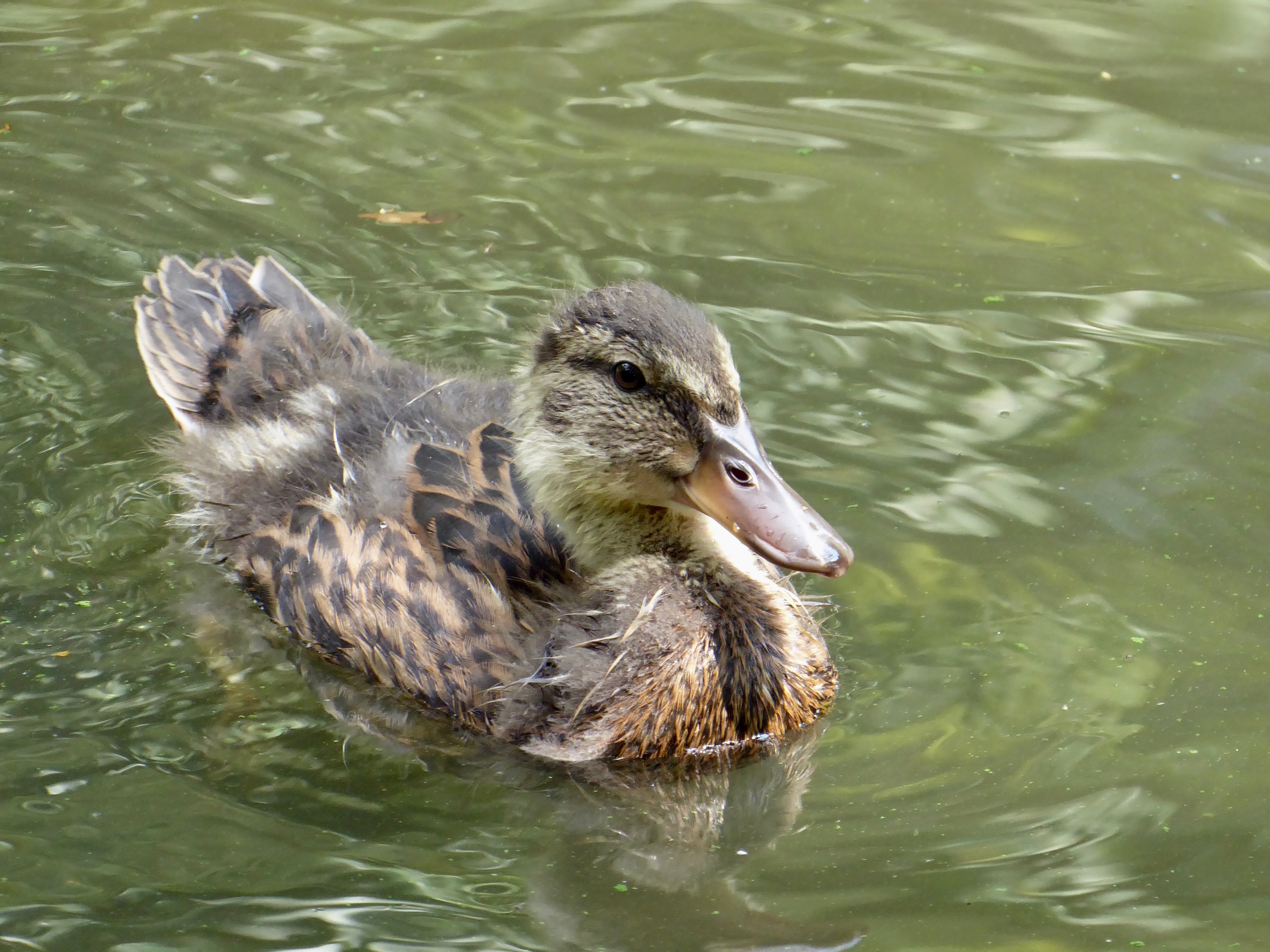 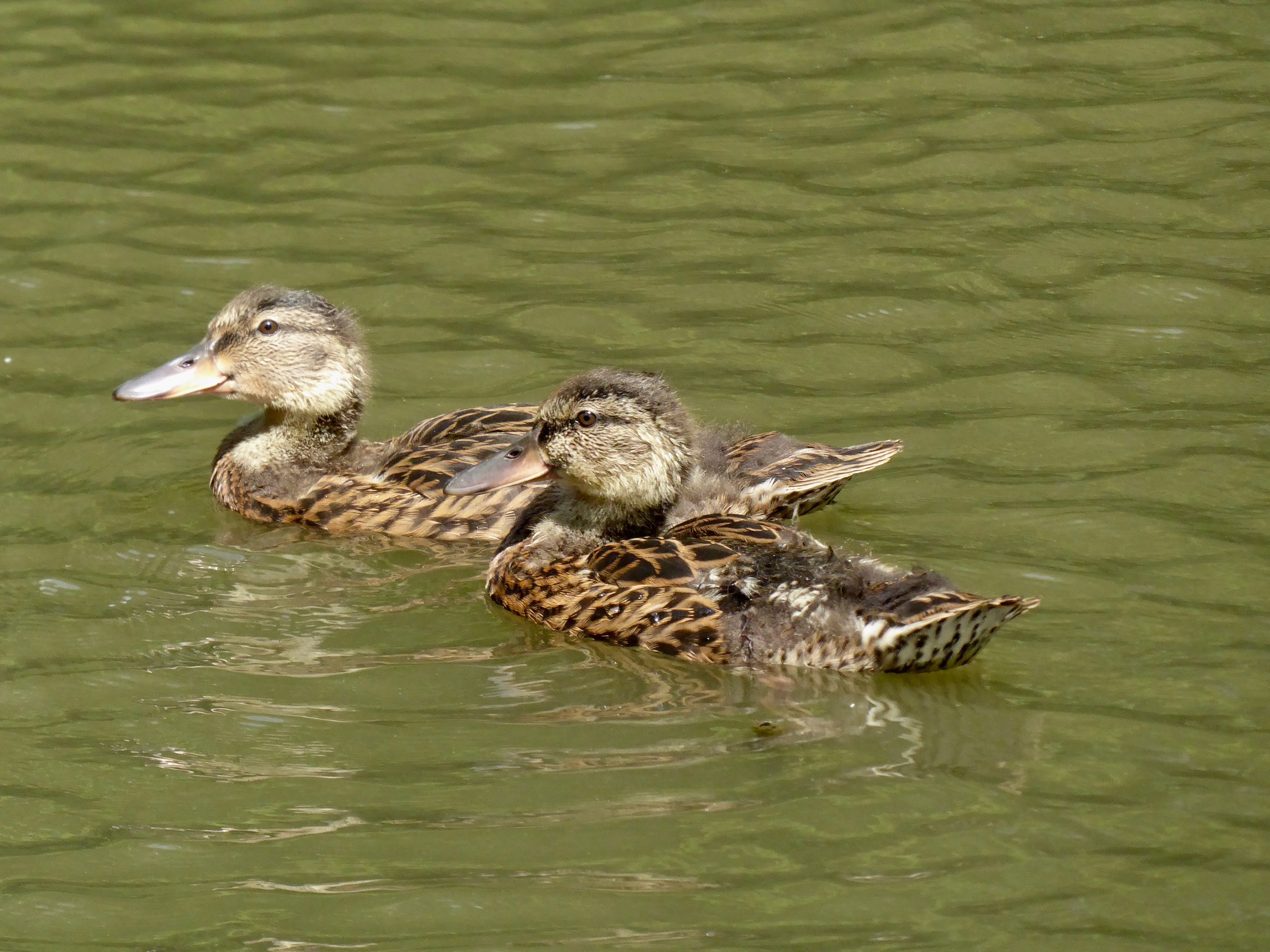 All the ducks begin practicing diving, preening, and zooming along the water when they’re very young. These are skills that will help them keep clean, evade predators, and learn to fly. Here are two videos by Jean Greenberg  showing these nascent behaviors:

Baby ducks can swim unbelievably fast, which of course they must do to escape predators and to keep up with Mom. Here Mom keeps up with them, having to fly after them as they zoom away.

Here’s Honey, who’s in full molt. She has no primary feathers (the white area is where those feather should be. She’s therefore flightless for a few weeks, and is irritable and picky with her food. But of course I still love her. She’s regaining her status as Alpha Duck by randomly chasing other ducks around the pond (she doesn’t hurt them): 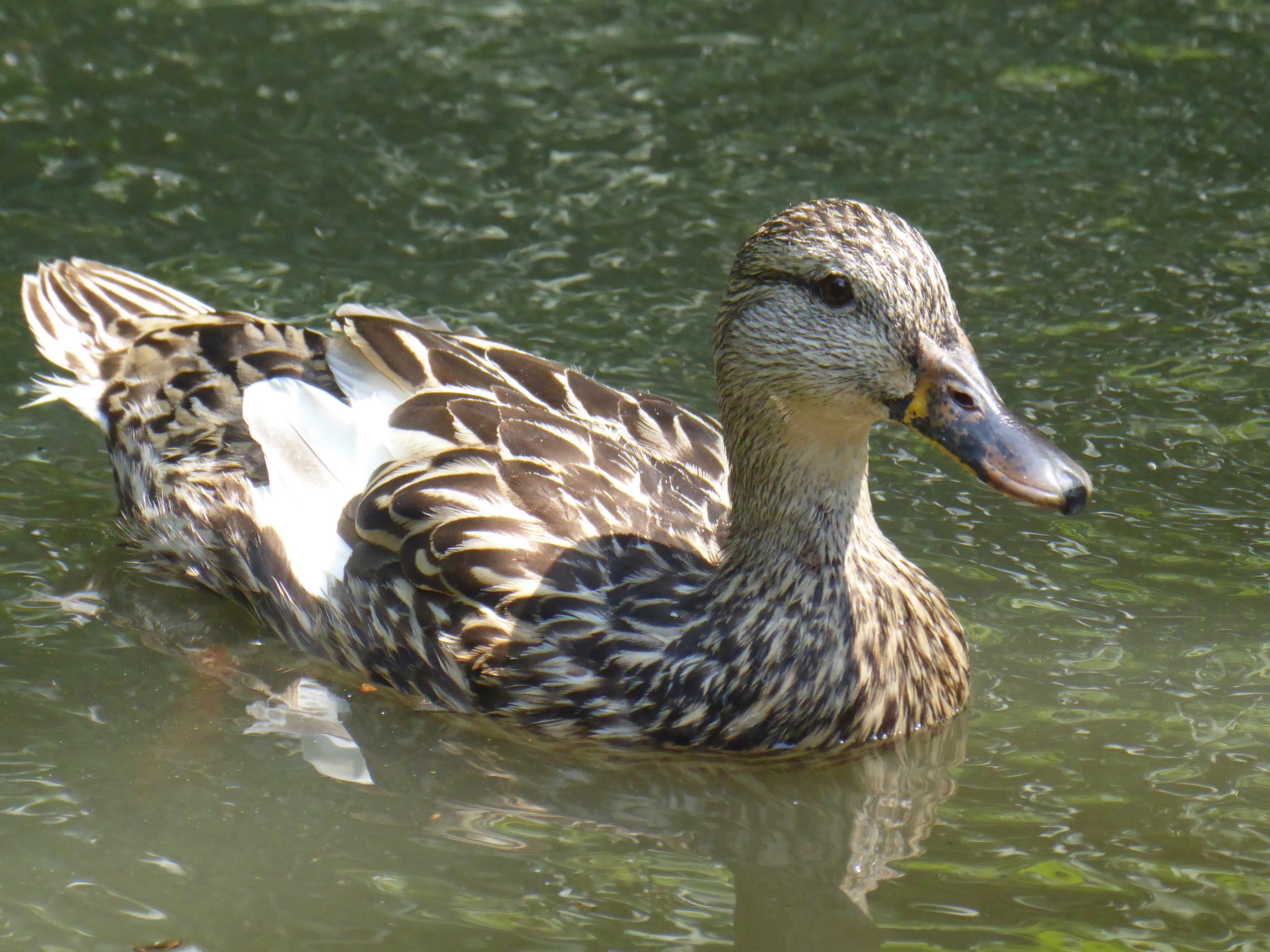 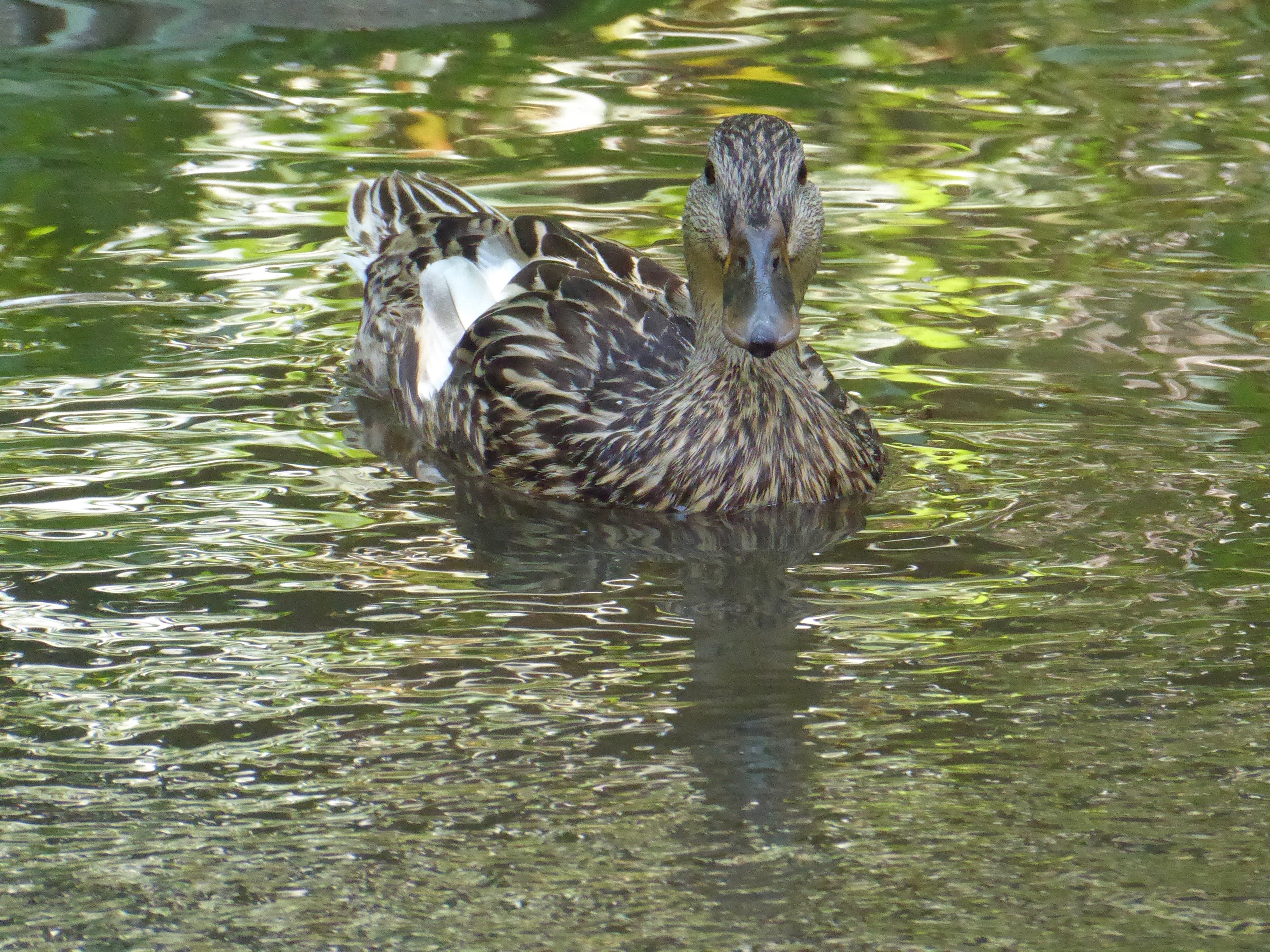 For comparison, here’s a duck with full primary feathers—the big flight feathers sticking out above its rump.  This one is standing on one leg, as some ducks are wont to do: 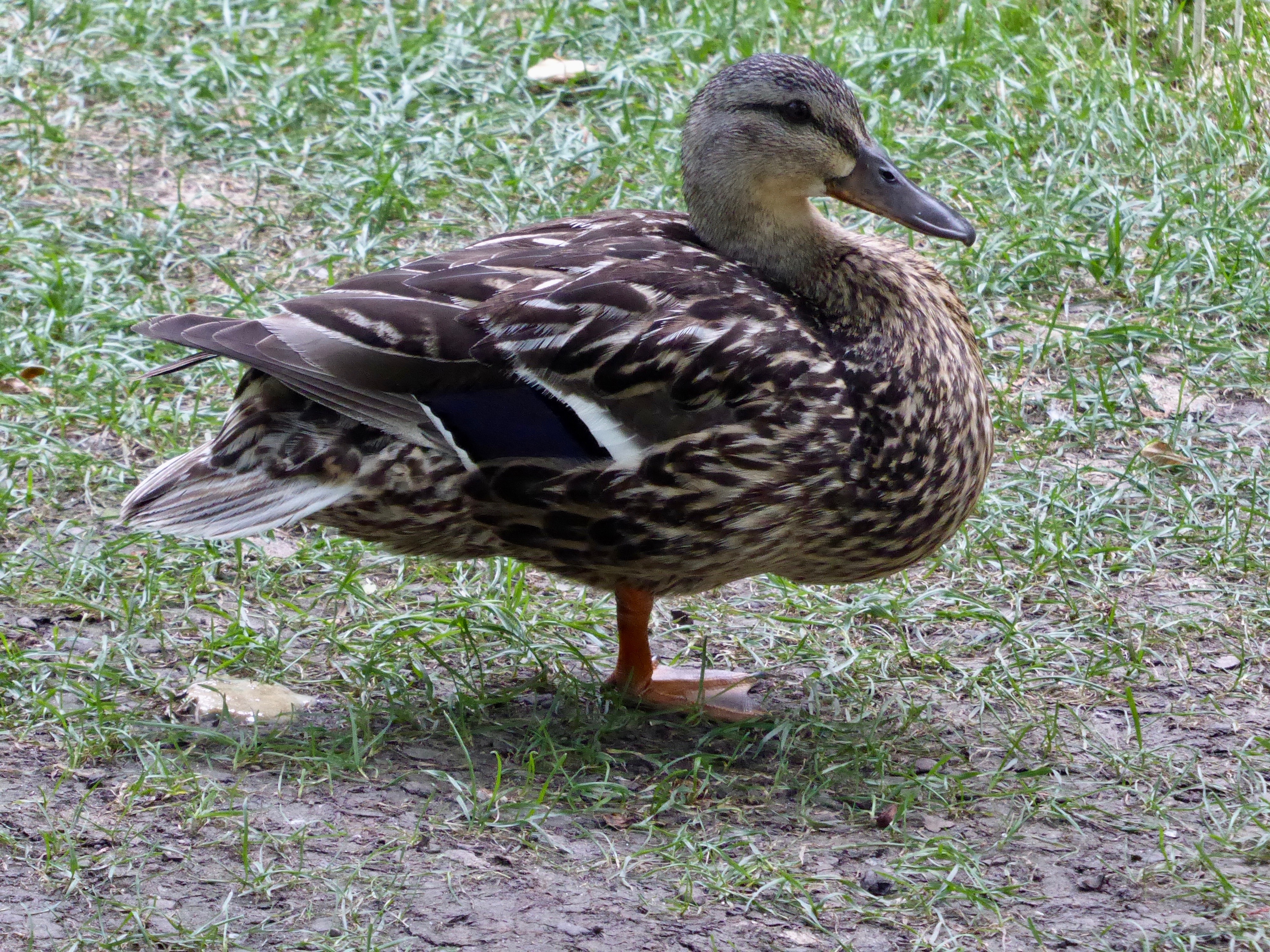 Finally, we mustn’t forget the turtles. The pond is home to several dozen red-eared sliders (Trachemys scripta elegans), the only turtle we have. Since Chicago is north of their breeding range, all the turtles are individuals that have been dumped into the pond, likely by owners who don’t want them. Nevertheless, they can still survive the winter by remaining quiescent at the bottom of the pond. Their tenacity is amazing.

This year we saw mating and breeding for the first time. I’ve described mating before, but in the last two weeks we’ve seen two large females digging nests next to the pond edge, laying eggs, and then covering up the eggs—all using their rear feet. Here’s a video of one of them laying eggs in a freshly-dug hole. (I don’t know why they don’t use their front feet.)

They cover up the holes well, packing the dirt down with their rear feet. Here’s a finished nest to the left of the six-inch ruler. Greg is coming down next week to check on the nests, and may excavate them a bit. (The eggs will not hatch in Chicago temperatures.) 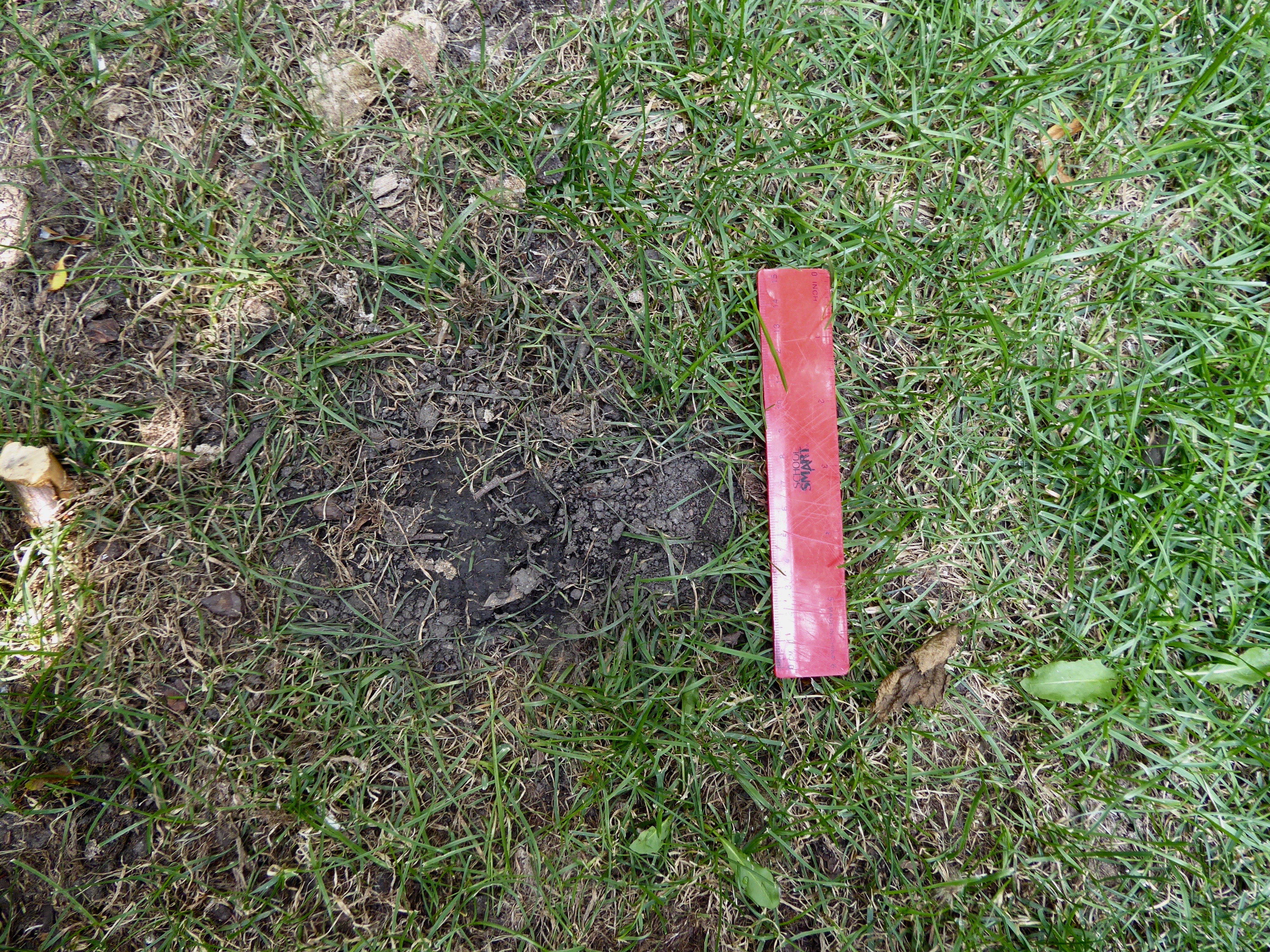 Finally, one of the most frequent questions I’m asked at the pond is, “Do the turtles and ducks bother each other?” And the answer is “No, they pretty much ignore each other.”

Occasionally a duck will be startled when a turtle bumps it in the water (turtles will eat duck food), but they do have an amusing mutualism.  Sometimes a hungry duck will nibble the algae off a turtle’s back. I regard this as beneficial for both species since the duck gets its vegetables and the turtle gets a haircut (algae probably impede swimming).

Algae-nibbling doesn’t happen often, but in this video I managed to capture it.

And that’s the latest report from Botany Pond, where the drama and fun never cease.

17 thoughts on “Sunday ducks (and turtles)”