UPDATE: Click on the screenshot to read Flegal’s new essay about what happened to her. Thanks to several readers for sending me the link.

The Sunday edition of the Boston Globe has a free article (click on screenshot below) by Amy Crawford discussing the results of Katherine Flegal and her colleagues on the relationship between weight and health. Flegal was a CDC scientist when she did this work, though she’s now at Stanford. What she and her coworkers did was correlate the relative risk of mortality in five classes of people with different body mass indices (BMIs; which are calculated by one’s weight in kilomgrams divided by the square of your height in meters). The classes are these:

Flegal et al. also looked at the relationship between weight and mortality in three age classes: 25-59 years, 60-69 years, and 70 years or older. They used mortality data from surveys by the National Center for Health Statistics over three periods of time: 1971-1975, 1976-1980, and 1988-1994, as well as the single year 2000. Since their first paper was published in 2005. there have been more studies and one meta-analysis of all the data (see second screenshot below). Not all the results jibe, but most of them do, at least in showing the most surprising outcome. Read on.

The data, published in the prestigious Journal of the American Medical Association in 2005 (see second screenshot below), showed, with appropriate controls, that while people who were obese or morbidly obese had, as expected, a higher death rate than those of normal weight, as did people who were underweight, people with BMIs of 25-30 (overweight but not obese) had the lowest death rates of all! In other words, you were better off being a tad plump than being “normal”. I had heard this before but hadn’t seen the data.

The Boston Globe article concentrates on the firestorm that the data of Flegal et al. produced, apparently because it went counter to the conventional wisdom that to be the healthiest, you should have the “normal” BMI. The study was apparently sound, and yet a professor of epidemiology and nutrition at Harvard’s School of Public Health took out after the study, calling it “deeply flawed”, and her results were attacked over the years. It was an early example of “cancel culture.”

You can read the Boston Globe article by clicking on the screenshot below: 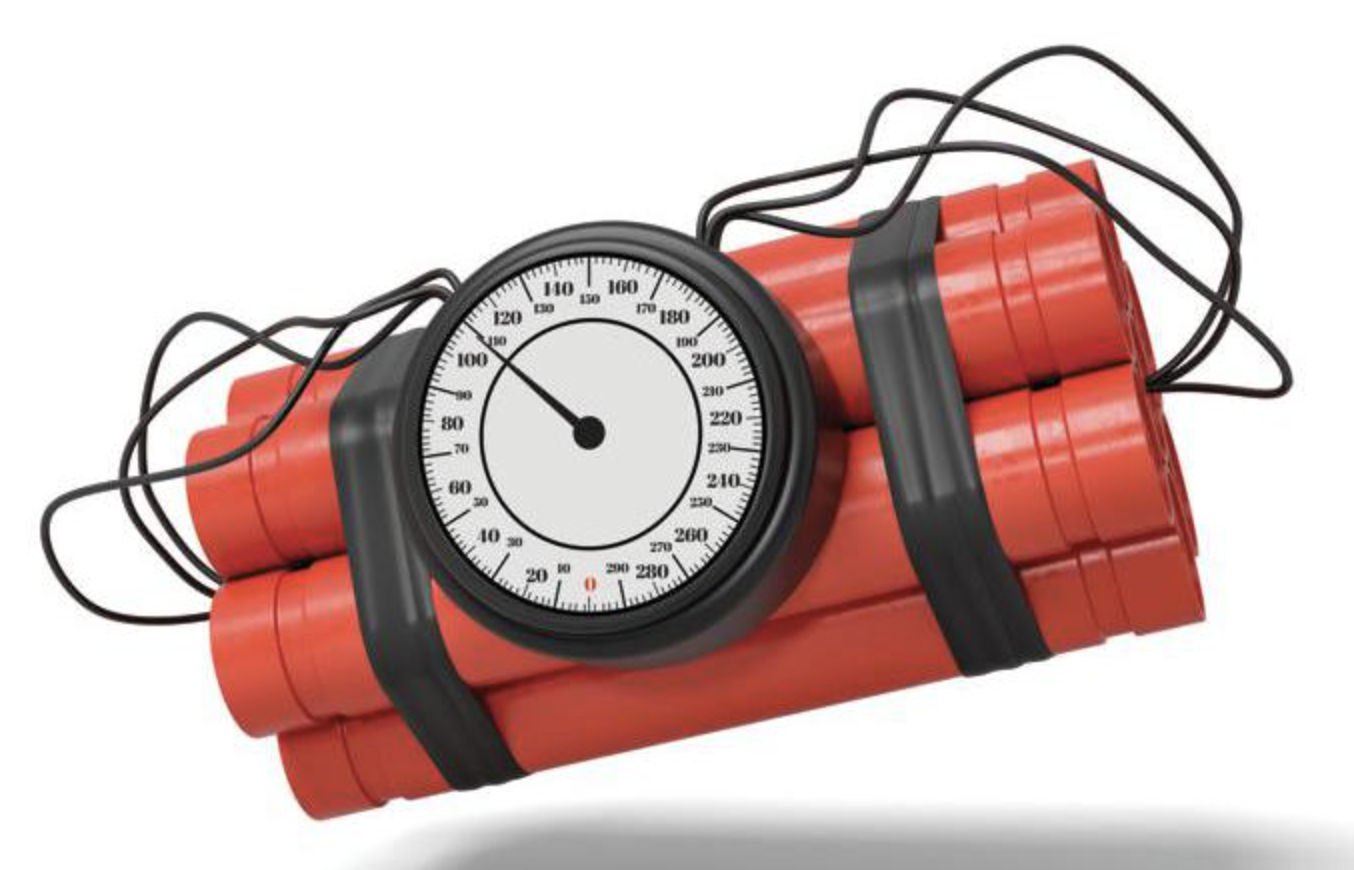 While it’s true that a few similar studies gave different results, most of them confirmed that a little avoirdupois was good for you, which enraged many people. As the Globe notes (my emphasis):

In 2013, Flegal followed up her 2005 paper with a meta-analysis — a review of published papers — in JAMA. In this research she and her coauthors reviewed 97 studies covering nearly 3 million people. Once again, they found people in the overweight category were least at risk of premature death. And once again, the paper roiled the fields of nutrition and public health, attracting special censure from Willett and his Harvard colleagues.

Willett emailed the CDC director to complain, arguing that the meta-analysis had caused damage and confusion and undermined public confidence in science. “Kathy Flegal just doesn’t get it,’’ he grumbled to a reporter for The Atlantic (“I go by Katherine,’’ Flegal notes). In an interview with National Public Radio, Willett said, “This study is really a pile of rubbish and no one should waste their time reading it.’’

Flegal’s confidence in her data, methods, and findings was never shaken. Still, the attacks took their toll. “There were all kinds of little things—it was like, wow, we’re under siege here!’’ she says. “I lost control of the narrative completely.’’

Flegal retired from the CDC in 2016 and took a part-time role as a consulting professor at Stanford. With more time to reflect on her experience, she finally decided that it was important to share her story. “It’s about getting it off my chest,’’ she says. “But it’s also like, wait a minute, this is not really right! People should know about this.’’

Flegal has now written an essay about her experience of being demonized, but I can’t find it online. I hope a reader can find it for us, and I’ll put it here above the fold. Several people in the article, including Alice Dreger, defend Flegal against the attacks.

Here’s the original study of Flegal et al (click to read, and there’s a free pdf). I’ll show both a graph of the relative risks from the paper, separated by BMI group and age class, and then the numerical data.

First, a plot of the relative risk data, showing that at all age classes it’s higher for people who are underweight, obese, or morbidly obese, set at 1.0 for BMI 18.5 to <25 (“normal”) and slightly lower for BMI 25-30, the “overweight”. The figures in the table below the graph (see below) are more informative.

And the table of relative risks, “relative” being to people of normal BMI. Notice that the error bars for the overweight often overlap 1, but are consistently lower than 1, suggesting a mortality advantage for being overweight. Note that the relative risk is set at 1 for the “normal class”. Note as well that from BMI 25-30, relative risks are lower, and substantially lower for never-smokers from 25-59 years old.  If you’re between 25-59 and obese, the data also show a reduced relative risk, which is weird, but the rest of the data is as you’d expect.

The authors barely mention the benefits of being “overweight”, mentioning it only twice, and very briefly, and not dwelling on it at all. Did they sense the furor it would cause (my emphasis): 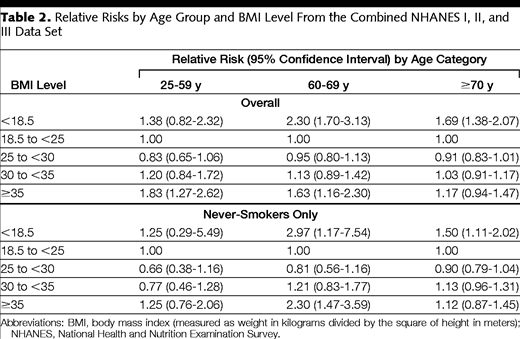 They found pretty much the same thing in the data for 2000, with BMIs between 25 and 30 associated with lower relative risks.In general, the authors say that they found less increase in relative risk among the underweight and obese than they expected.

Figure 2. Estimated Numbers of Excess Deaths in 2000 in the United States Relative to the Healthy Reference BMI Category of 18.5 to <25, Shown by Survey and BMI Category

Now why, if these data be true, does it seem to be good to have a little excess poundage? Nobody knows, but perhaps “normal” BMI has been improperly defined. It may be the median BMI (I doubt it), but most probably the BMI that doctors think is the healthiest. But it doesn’t seem to be, at least if you consider mortality as the ultimate arbiter of unhealthiness. If I were to hazard a guess, I’d say that in our ancestors, being a bit overweight gave you a selective advantage, as you’d be better able to weather times of famine, and so the evolutionary mortality “setpoint” was set at having a bit more fat than doctors like to see today. But this is just a theory which is mine, and I have no idea whether it’s true.

Below is the meta-analysis by Flegal et al. mentioned above, also published in JAMA, and I haven’t yet read it. I’ll leave that as an exercise for readers (it’s free if you click on the screenshot), who will surely want to discuss this long-known but surprising result. Remember, we don’t know how much confidence we should put in it, as all scientific “facts” are tentative, and later analyses may give different results:

56 thoughts on “Is being a bit overweight good for you?”