A religious organization has collected some new data showing that Christianity in America is waning even faster than I thought, especially among Hispanics who are abandoning Catholicism like a sinking ship. A precis of the data is published on the Rosa Rubicondior site (“RR”; first screenshot below), which graphically distills the data from a five-page study released by the Barna Group (screenshot below that one), a group headed by a religious man and hosted by Arizona Christian University.

If the Barna group raises red flags about the decline of religion in America, you can bet they’re not making it up. Their survey was based on 2,000 American adults surveyed in February. And it shows what I’ve long maintained—this is not my theory that is mine but the conclusion of many people—that Christianity, and religion in general, is dying in America. (The exceptions are an increase in Islam, probably due to immigration, and in Buddhism, a basically godless religion.) The decline is due largely to a loss of faith among young people, as we’ve seen several times before. Religion wanes one corpse at a time.

And a pdf of the original Barna survey (five pages):

Here are the main findings taken from the study itself:

The latest findings from the American Worldview Inventory 2021 identify a number of major shifts in the U.S. religious landscape, including:

• dramatic changes in the faith of American Hispanics, with a decrease in the number of Hispanic Catholics, accompanied by a sharp increase in Hispanic “Don’ts”—those who don’t believe, don’t know, or don’t care if God exists;

• fast growth in Islamic, as well as Eastern and New Age religions;

• a consistent 30-year decline in both Christianity and confidence in religion;

• a breathtaking drop in four critical spiritual indicators: belief in God, belief in the Bible, recognition of salvation through Jesus Christ, and possession of a biblical worldview;

• and a surprising increase in belief in reincarnation, even among Christians.

Rosa Rubicondior has made graphs, which show the data very nicely. All of them shown below come from the RR site, and when I quote I’ll give which of the two sources I use.

First, we have a rise of what both pieces call the “don’ts” in America, a term roughly equivalent to the “nones.” These are, according to Barna, “people who say they don’t know, don’t care, or don’t believe that God exists.” This proportion rose from 10% of all Americans in 1991 to 34% this year. There was a big jump in the last decade.  Here’s the chart: 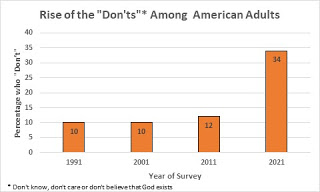 As Barna notes, this is due to the young:

The expansion of the Don’ts among Hispanics is indicative of how rapidly that segment is growing across America. While one out of 10 U.S. adults qualified for that category in 1991 and again in 2001, the segment nudged up by just a couple more percentage points by 2011. That means the incredible growth of that category has taken place in the past decade, with the number of Don’ts nationwide nearly tripling from 12% in 2011 to 34% in 2021.

Who is responsible for that rapid and substantial growth? One of the leading segments is the Millennial generation (currently ages 18 through 36). The American Worldview Inventory 2021, an annual survey of Americans’ worldview conducted by the Cultural Research Center at Arizona Christian University, reveals that 43% of Millennials are Don’ts—the highest of any adult generation in the country.

I was surprised to see this paralleled by a loss of Catholicism among Hispanics, doubtlessly due to both acculturation and the secular Zeitgeist. The proportion of Hispanic-Americans identifying as Catholic has more than halved since 1991: 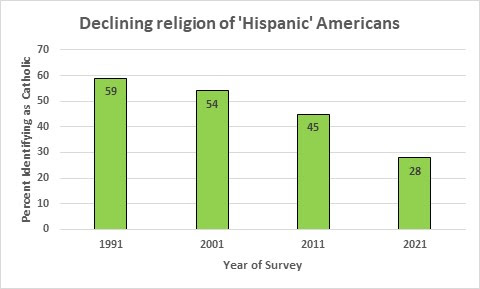 And we see the rise of the “Don’ts” among Hispanic-Americans as well, which has increased elevenfold since 1991: 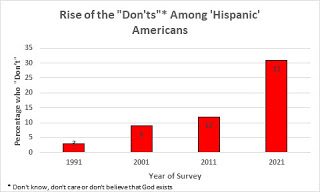 Most of the loss of faith among Hispanics has occurred among Catholics, but it hasn’t been picked up by other religions—except for the “Don’ts”:

There are two “outlier facts” here.  First, as I said, Islam and Buddhism are the exceptions to the general loss of faith. From the Barna survey:

But the American Worldview Inventory 2021 also identified two other rapidly growing faith segments. One of those is Islam. While the Muslim faith had virtually no presence in the United States prior to the early 1990s (less than one-half of one percent of adults affiliated with Islam in 1991), that proportion has jumped in the past decade to nearly 3%. While that percentage is still small in comparison to several other faiths, the growth rate of Islam in America has exceeded even that of the Don’ts during the last decade.

In addition, Eastern religions (such as Buddhism and Hinduism) have also experienced resurgence in recent years. Presently, nearly 5% of adults associate with an Eastern or New Age religion. While that is more than double the proportion measured a decade ago, it is also indicative of the current search for alternatives to Christianity. Some that increase is also attributable to the continued expansion of the Asian population in America, now estimated to exceed 5% of the aggregate population.

The other is a rise in belief in reincarnation, which may be part of the same tendency that has led to an increase in Buddhism and Hinduism. (While Buddhism is a godless faith, it is not a “scientific” faith. Despite the Dalai Lama’s profession that science and Buddhism are completely compatible, he’s wrong. The concept of reincarnation and karma, both of which I think the Dalai Lama accepts, are profoundly unscientific. And of course Hinduism is a long way from secularism. )

Also growing appears to be a contradictory belief of many Christians, in reincarnation. 24% of self-identified ‘born again’ Christians who profess to believe they face an eternity in God’s presence if they confess their sins and accept Jesus, with the alternative of hellfire if they don’t, also believe they may be reincarnated. Clearly both can’t be true.

Finally, we can break down faith into four separate propositions. Each of these (save belief that one will go to heaven) has decreased pretty steadily over the years. General belief in an “orthodox biblical view of God” has shown a particularly striking decrease. Only 2% of Americans accept the idea of a Hell, and that figure hasn’t changed much in 40 years. Sheer wish-thinking, especially when you consider that 30% of Americans think that they themselves will go to Heaven. 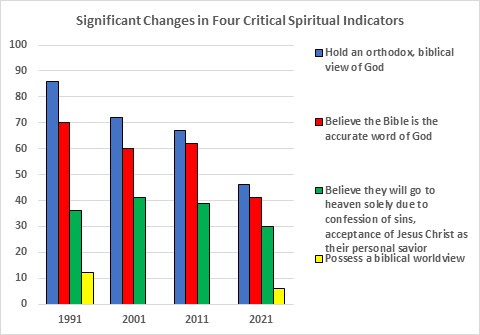 Now the head of the Barna Group, George Barna, is deeply concerned at these results, for he’s a religious man. First he limns how he sees America changing:

Barna explained, “This new America we see emerging is radically different—demographically, politically, relationally and spiritually. It is a young, non-white, mobile population. This group is largely indifferent to the United States, and is demonstrably skeptical of the nation’s history, foundations, traditions, and ways of life. They are technologically advanced, sexually unrestrained, emotionally unpredictable, and a spiritual hybrid. Christian ministry as practiced for the last five decades will not be effective with this unique population.”

Barna suggested some new avenues for ministry to pursue. “Because a worldview is developed when people are young, it is imperative that churches focus on and invest most heavily in reaching children and equipping their parents,” he said.

“Because the Bible is increasingly rejected as a trustworthy and relevant document of life principles, we must re-establish the reasons for its value and reliability.”

Good luck with that, George! Get the children when they’re young, and Barna will show you the (brainwashed) adults.

Barna continued, “Given that most young Americans view success as whatever produces happiness or satisfaction, we will have to address the emptiness and inadequacies of a life devoted to self and our fluid emotions. And without a solid foundation of truth upon which choices can be made, a society is doomed to hardships, failures, and conflict. In the person of Jesus Christ and through the pages of the Bible, absolute moral truths are knowable and can be applied to facilitate a successful and meaningful life.”

The Arizona Christian University professor also explained that many of the approaches now relied upon by Christian ministries—and especially by churches—may be inadequate to impact the new population that needs to be reached with God’s truths and principles.

“Typical church services and programs are not likely to minister to people in the way they did in the past,” he cautioned. “Reconsidering what it takes to facilitate disciples in such a different environment is a necessary step in the reimagining process.”

What Barna doesn’t see here is that even if you convince people that their lives are “empty and inadequate” if they pursue their own self-interest, that won’t necessarily drive people back to religion. There are many ways to reach out beyond oneself and help others without dragging the supernatural into it. And what Barna doesn’t realize, despite the strength of his very own data, is that America, like most of the West, is engaged in a wholesale loss of religion in favor of seculariam. Unless Jesus comes back or the Four Horsemen ride in, I don’t think this trend can be stopped, except perhaps for a slight increase of Islam in America. As well-being and secular morality increase in the West, religion will be discarded—just as children discard the toys they no longer need.

43 thoughts on “Christianity and religion in general are dying in America, especially among Hispanics”