Send in your photos, please! Today’s batch of travel photos comes from reader James Blilie. His comments are indented, and you can enlarge the photos by clicking on them.

Here’s another group of street photos that I took. All of these were taken on my bicycle trip around the world in 1990-92.

All are scanned Kodachrome 64, shot on a Pentax LX camera with various Pentax A-series and M-series lenses.  I now own none of this equipment except the original 1978 K-1000 camera that was my first camera and a replacement Pentax M 50mm f/2.0 lens, just like the first lens I had.

Young man on the Big Island of Hawaii, cast-net fishing. 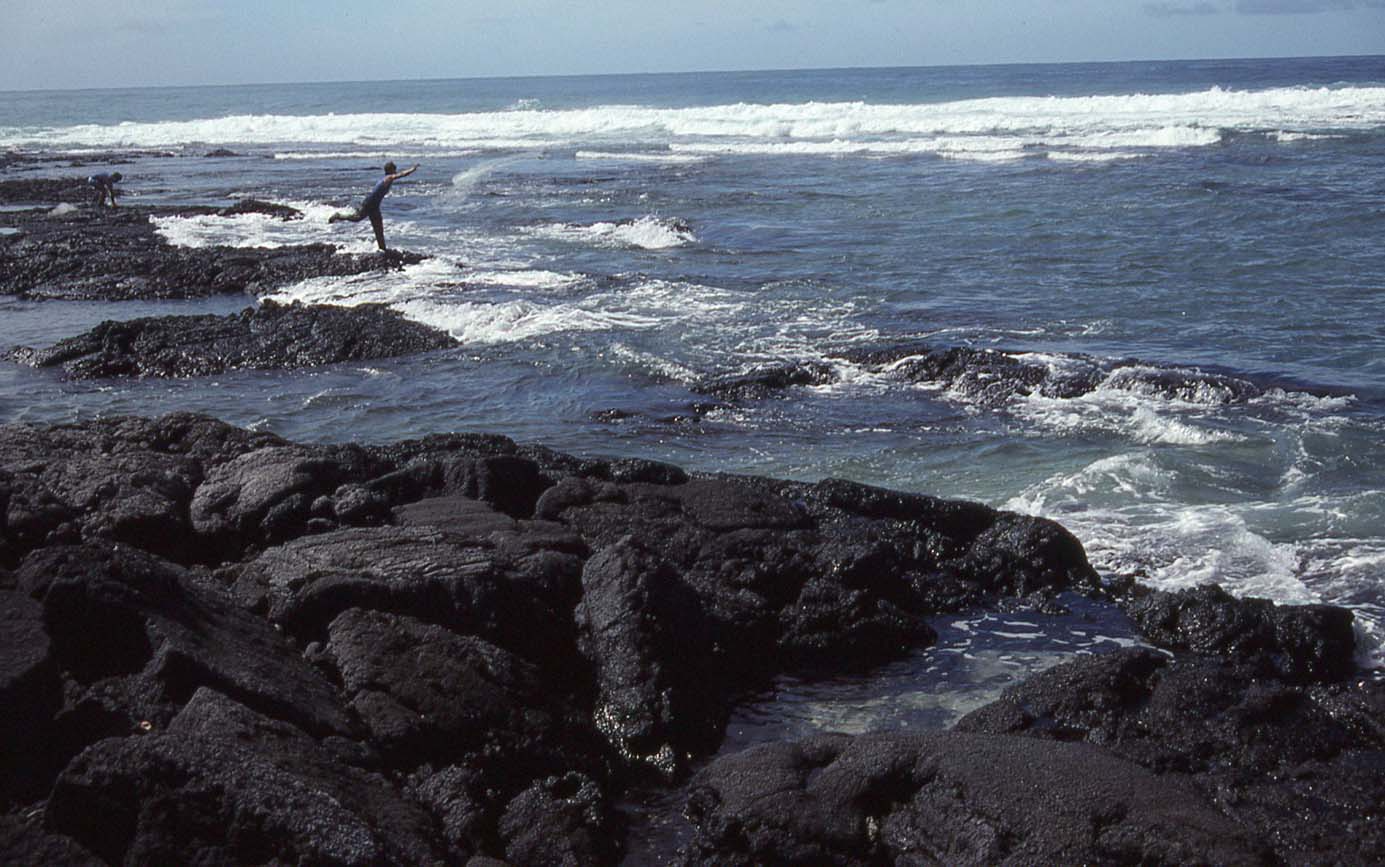 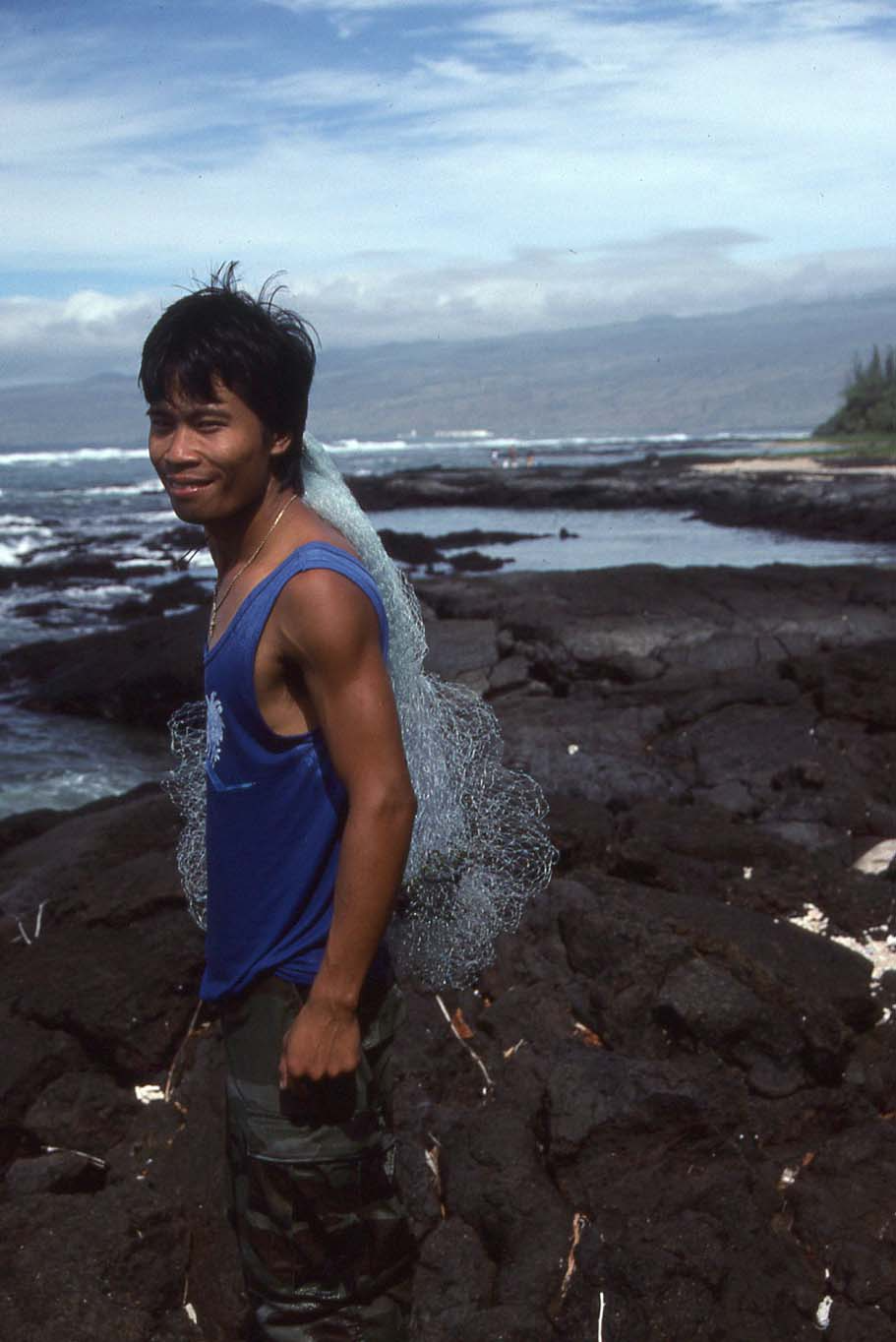 Group of sugar cane field workers, on the road in Fiji (main Island of Viti Levu).  They came out of the fields to this bus stop, carrying their big cane cutting knives.  They seemed rather intimidating; but were teddy bears.  They are posing with my friend’s fully loaded bicycle. 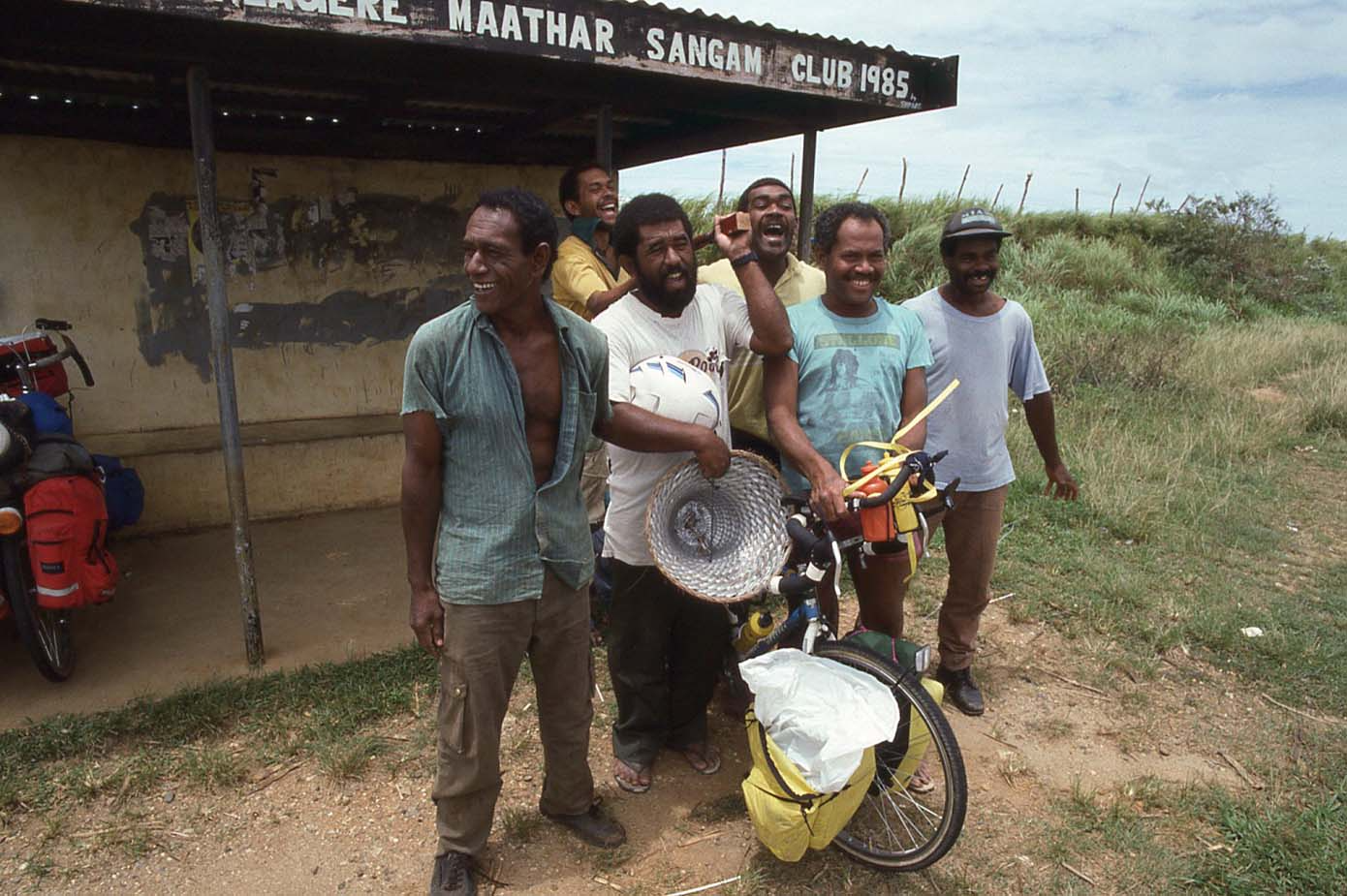 Young boy, Fiji.  He was the son of the right-hand man of the owner of a campground we stayed at. I imagine he has children of his own by now. 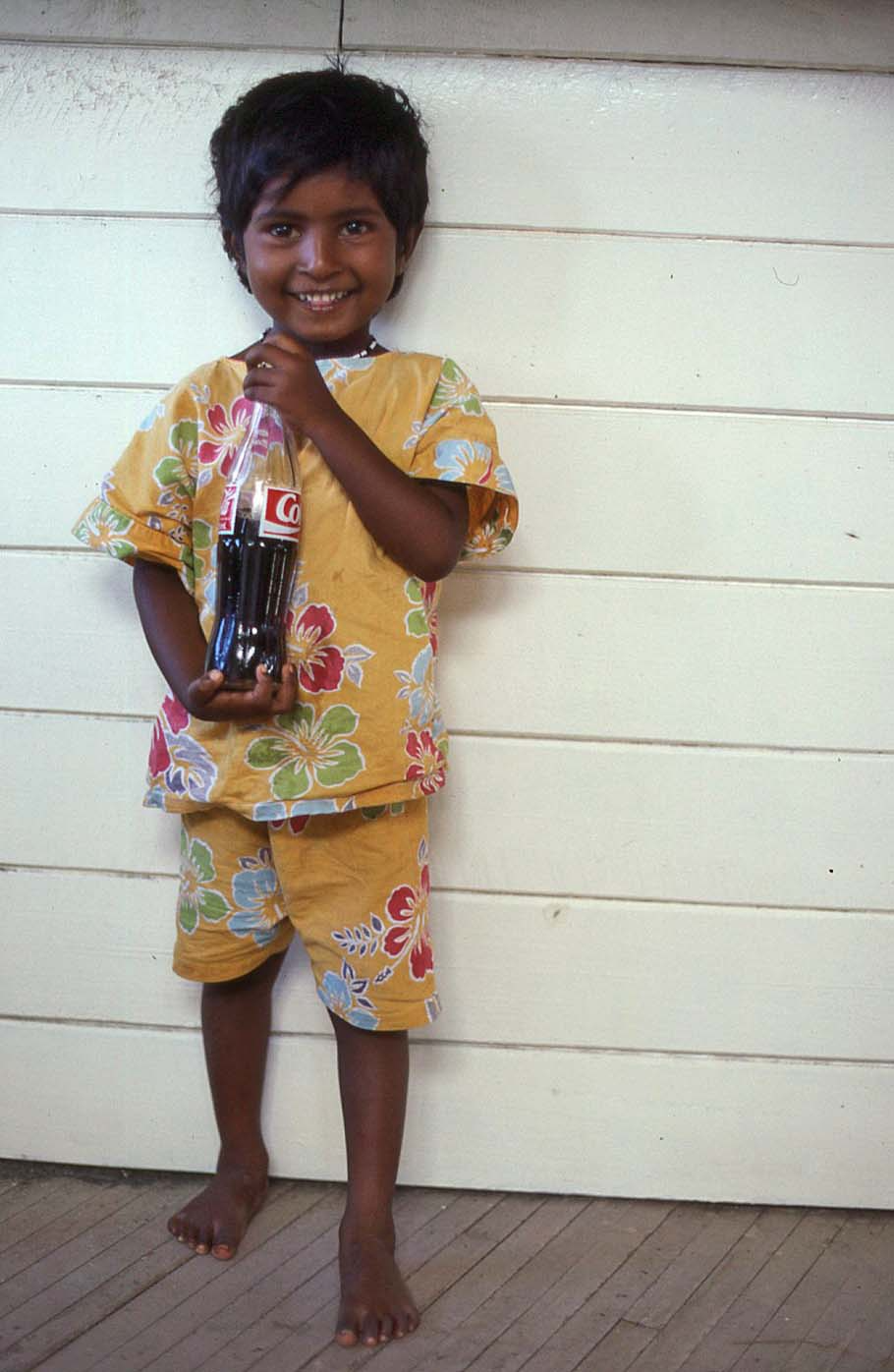 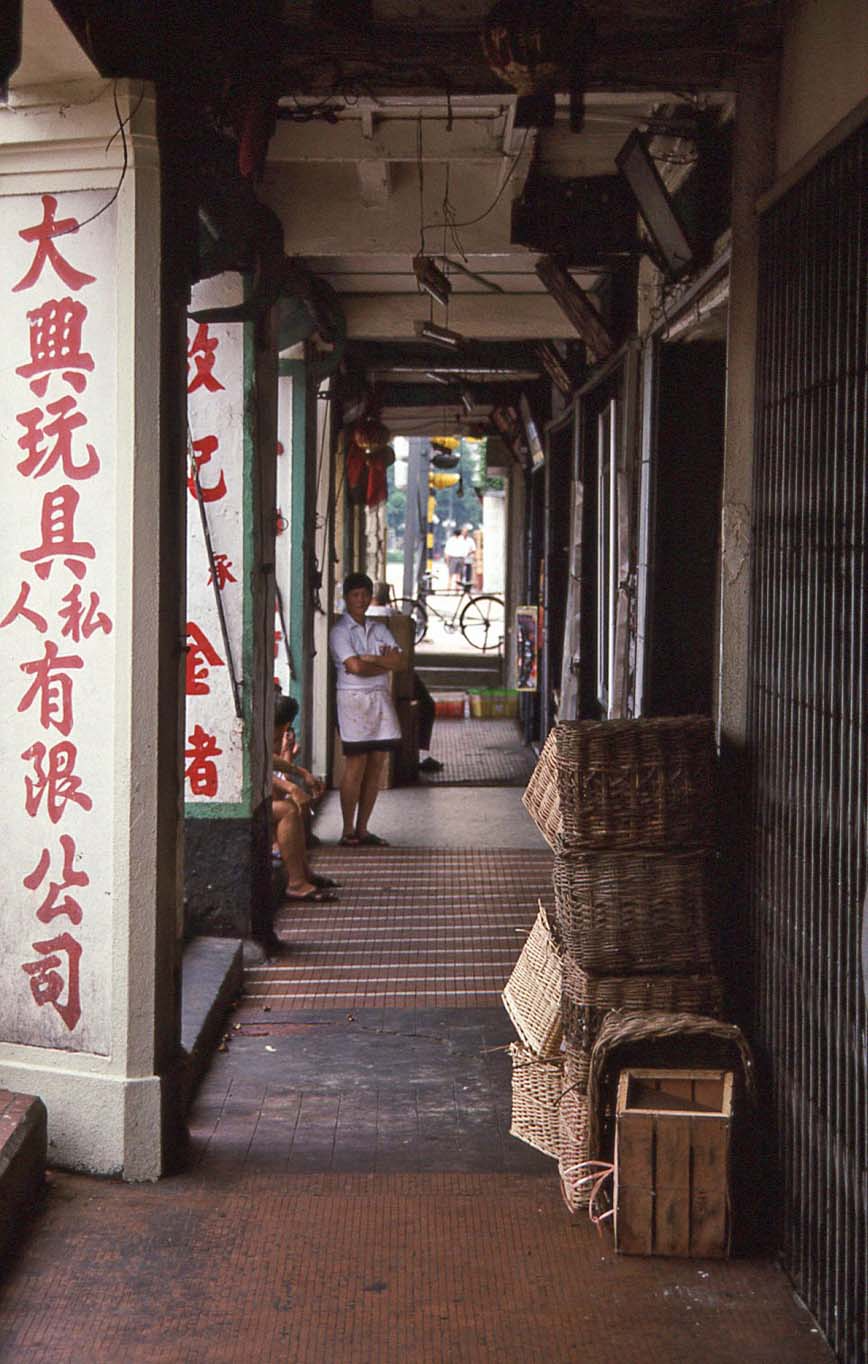 The nieces of the owner of a home-stay (like a B&B in the US) where went spent a night in Peninsular Malaysia, along the east coast highway.  They are looking at the photo prints of the USA that I had brought with me plus some photos from New Zealand and Australia. 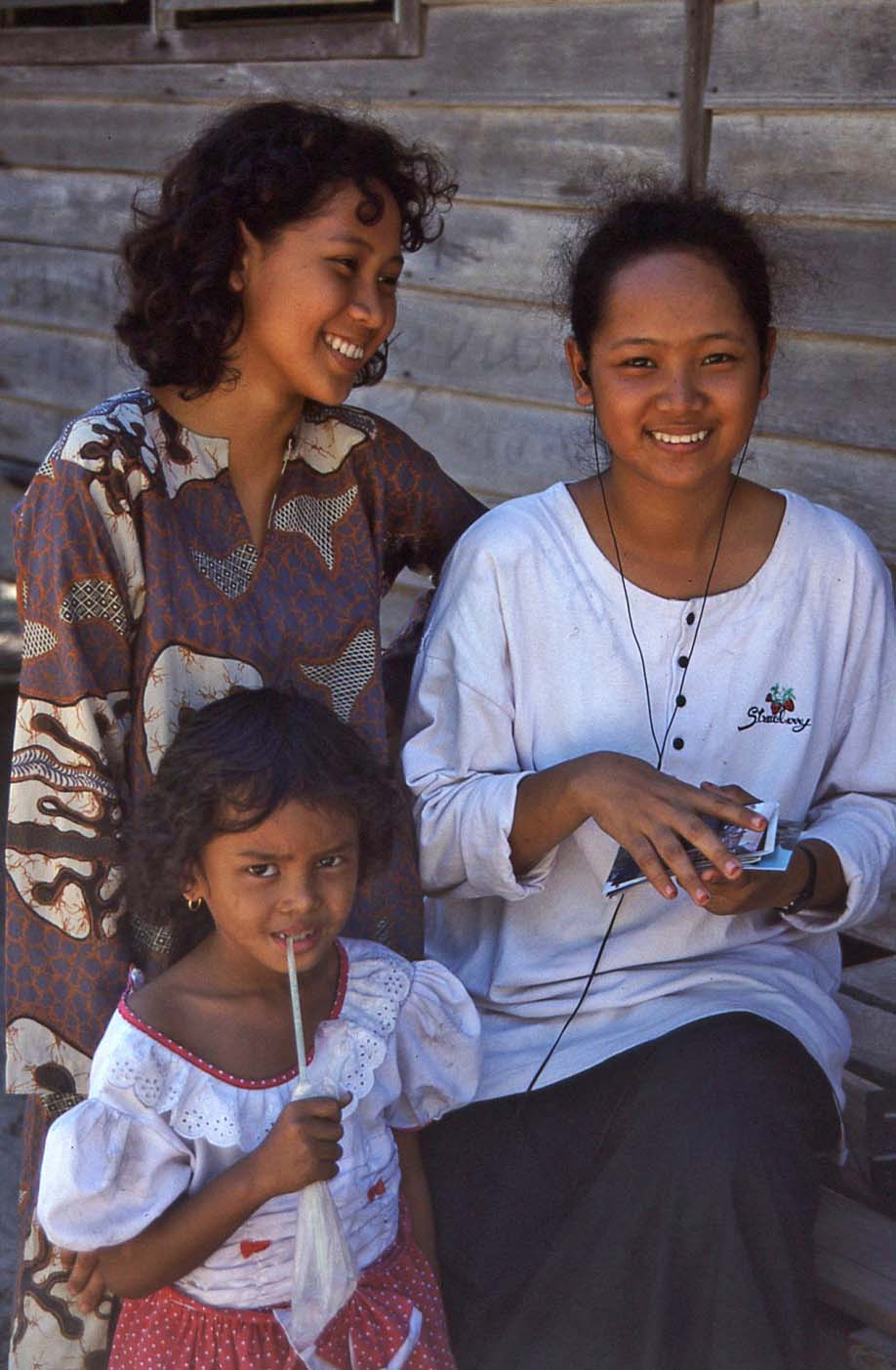 Young man showing how much cargo is transported in Thailand on those little 125cc motorbikes, seemingly the national mode of transportation.  Sungai Kolok, Thailand 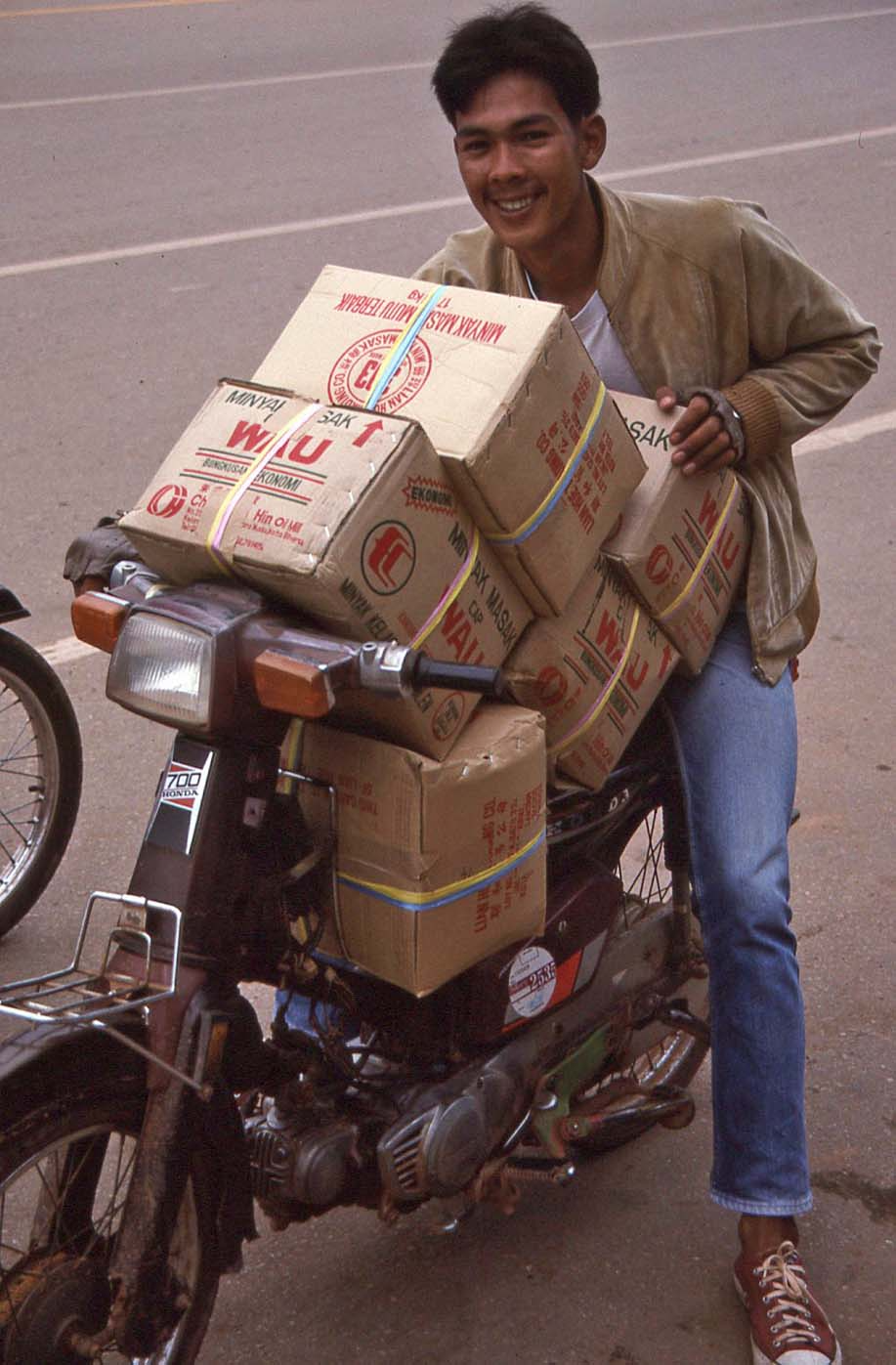 Scenes in traffic, Bangkok, Thailand.  The motorbike taxis are amazing.  I shot the photo of the young woman on the back of one of them to remember how these women would perch on the back, never hanging on, as they zipped through traffic, dangling a sandal from theirs toes, unruffled by all of it.  The second shot is at a taxi stand. 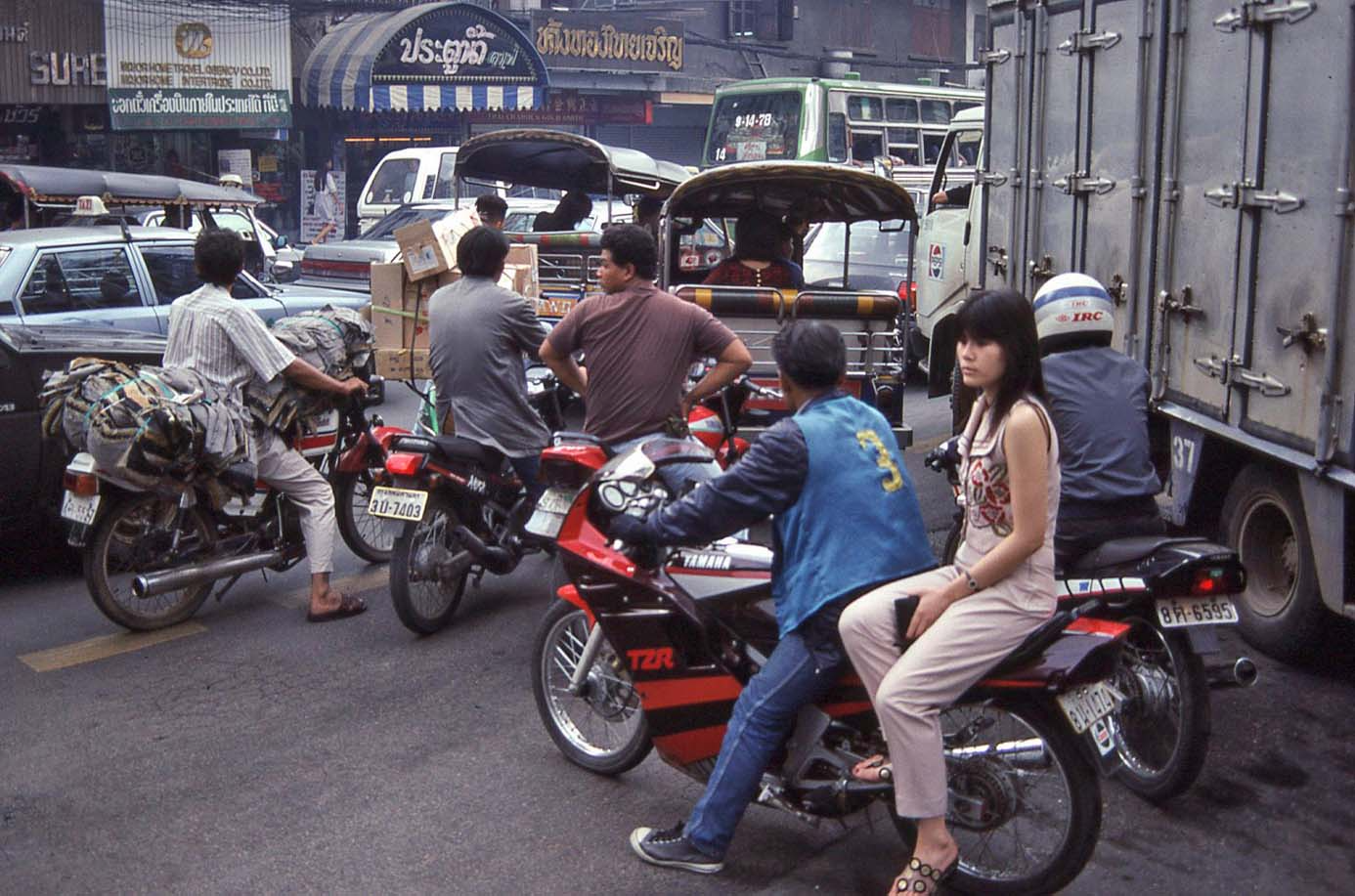 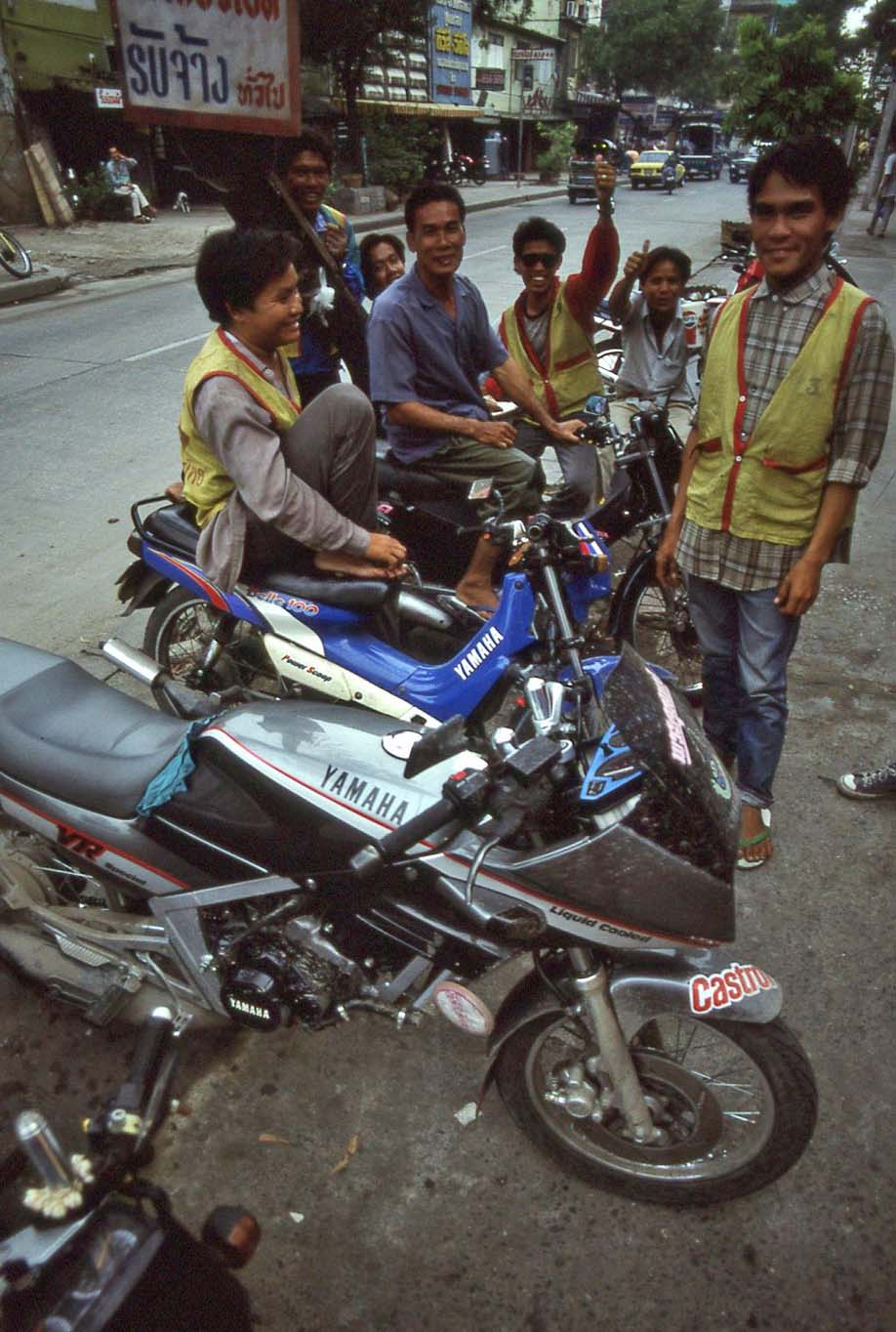 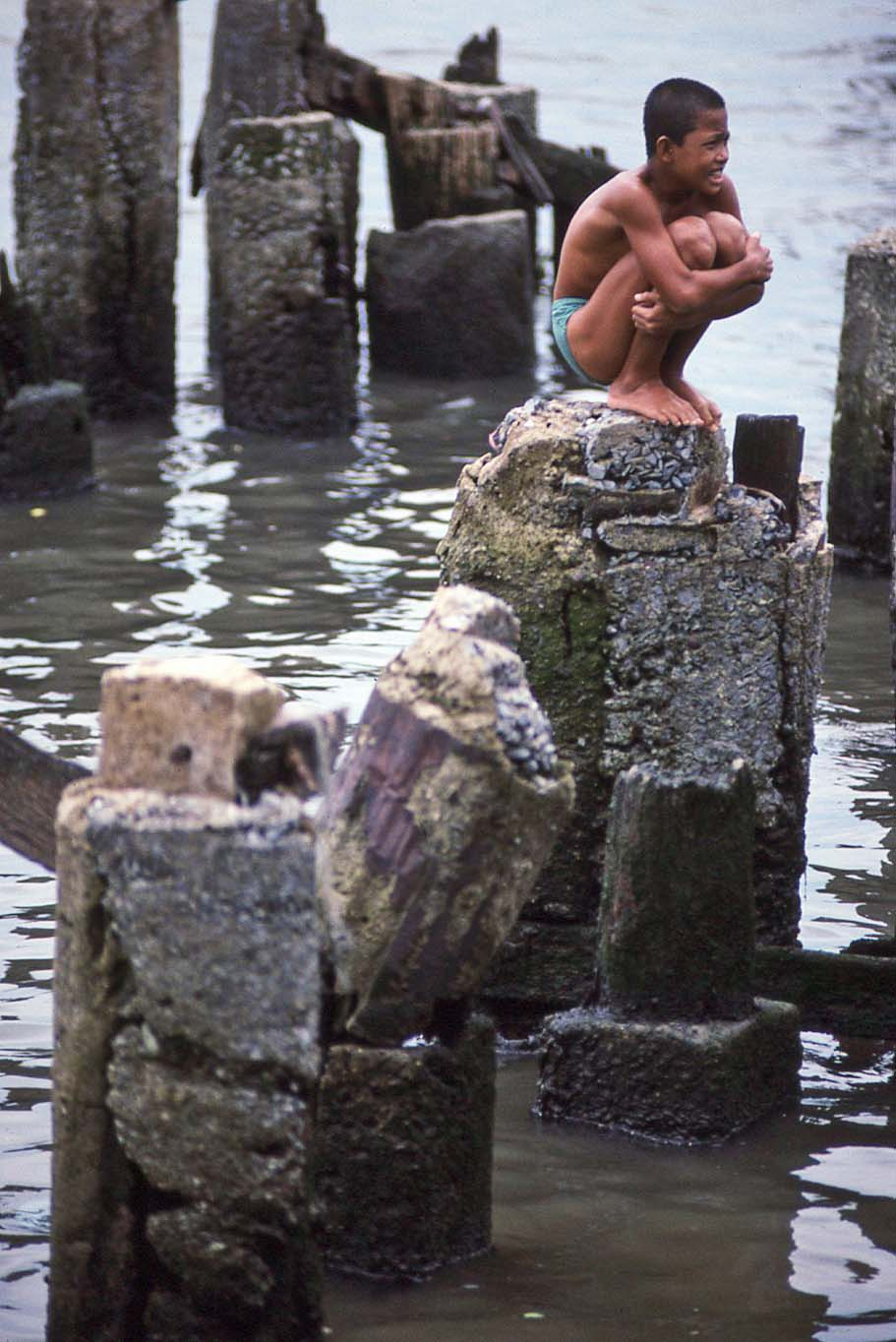 Shipping with United Parcel Service, Bangkok Thailand.  Same brown paint on the UPS truck! Same brown uniform on the UPS driver.  We sent our bikes onward from Bangkok to Denmark, knowing that we weren’t going to bicycle in:  Thailand (beyond getting to Bangkok), Nepal, India, Kenya, and Egypt. 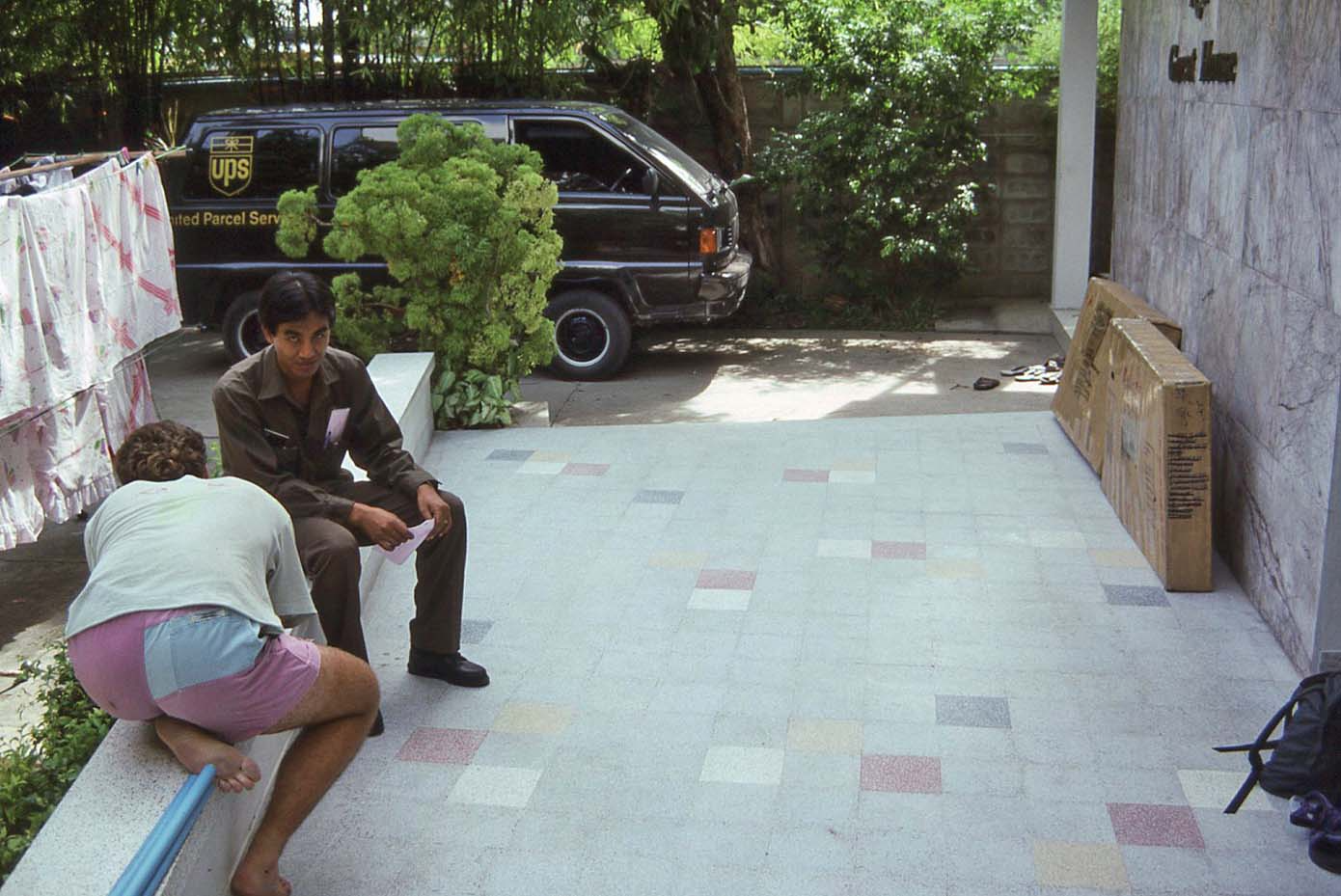 Finally, public transport in Kathmandu, Nepal.  I have no idea how people survived this kind of thing. We rode in some (sardine-) packed matatus in Kenya; but nothing like this!  We either walked or got taxis in Kathmandu.  The bus trip from Kathmandu to Pokhara in 1991 was pretty exciting. [JAC: It wasn’t much different when I did it about ten before that. If you’re on a long-distance Nepalese bus, try to get onto the roof and hang on; it’s less crowded and the scenery is great, though of course it’s not exactly safe.] 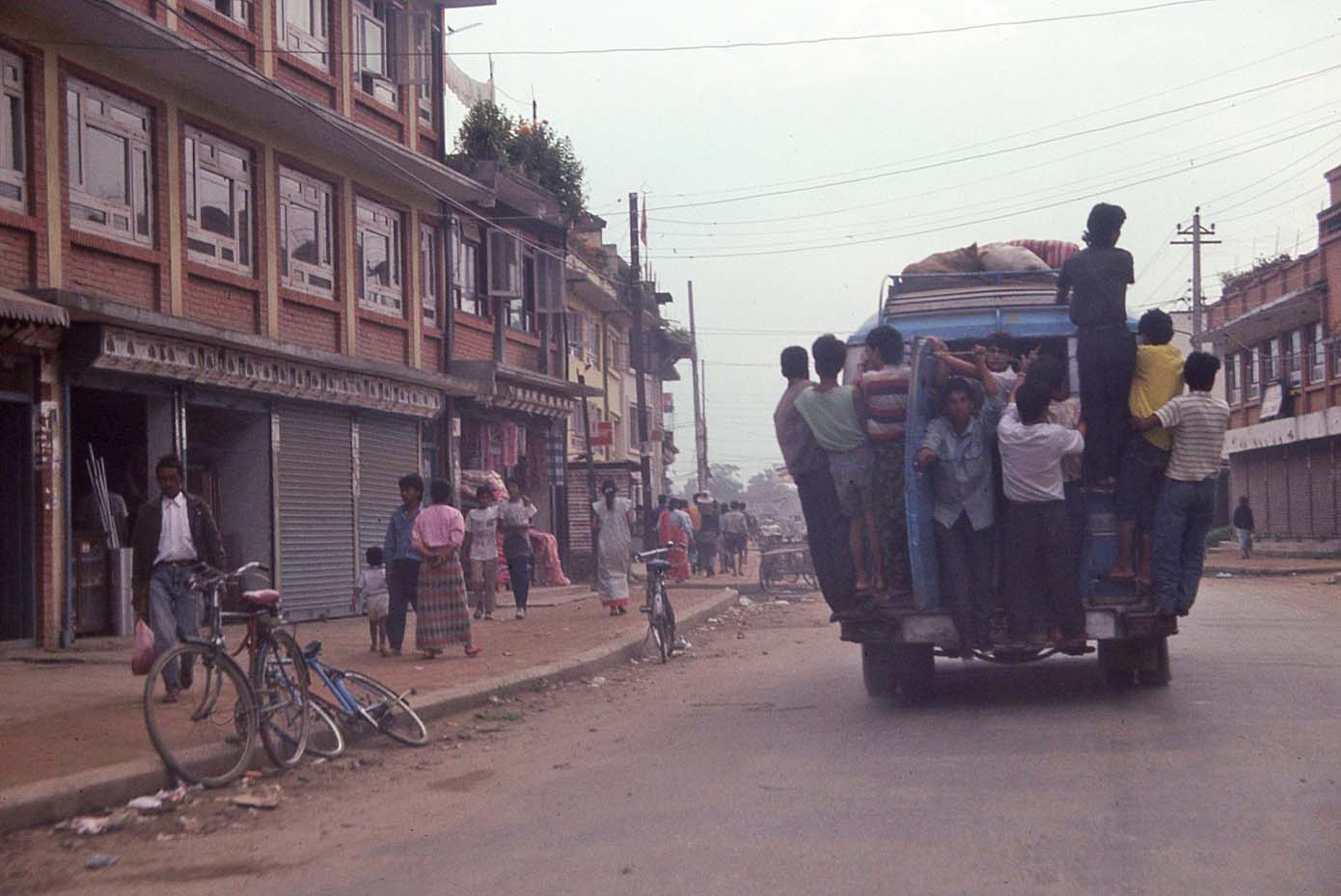