Bret Weinstein and Heather Heying have made a video about a new scientific paper in which two biologists name a new species of ant—but according to woke specifications. They named the ant after a person (this kind of naming is likely to stop when people discover that nobody in the world has ever been perfect), but instead of putting the customary “i” after a male name or “ae” after a female name, they used “they” as a plural pronoun. This, as the authors describe, is to honor people who “do not identify with conventional binary gender assignments.”

The new ant species’ name, Strumigenys ayersthey, with the “they” appended to Ayers’s name) is in honor of Jeremy Ayers, a potter from Athens, Georgia. Did Ayers used “they” as his pronoun? I have no idea. New Scientist reports that he was gay, but gay people don’t use “they” pronouns unless they identify as multiple genders at once. From New Scientist‘s piece on the name:

Ayers was a protégé of Andy Warhol in the 1970s under the pseudonym of Silva Thinn. He died in 2016. “He identified as a gay man outside of his Warhol character, but I’m naming it after him with the suffix added to include all non-binary people for his activism,” says Booher.

In other words, they’re honoring not the man’s open homosexuality, but genderfluidity in general. Is that the place of a scientific paper?

And a famous musician contributed to this name:

Booher also asked Michael Stipe, the lead singer of the band R.E.M. and a mutual friend with Ayers, to join him in writing the etymology section of the paper outlining the new species:

A picture of one individual of S. ayersthey: 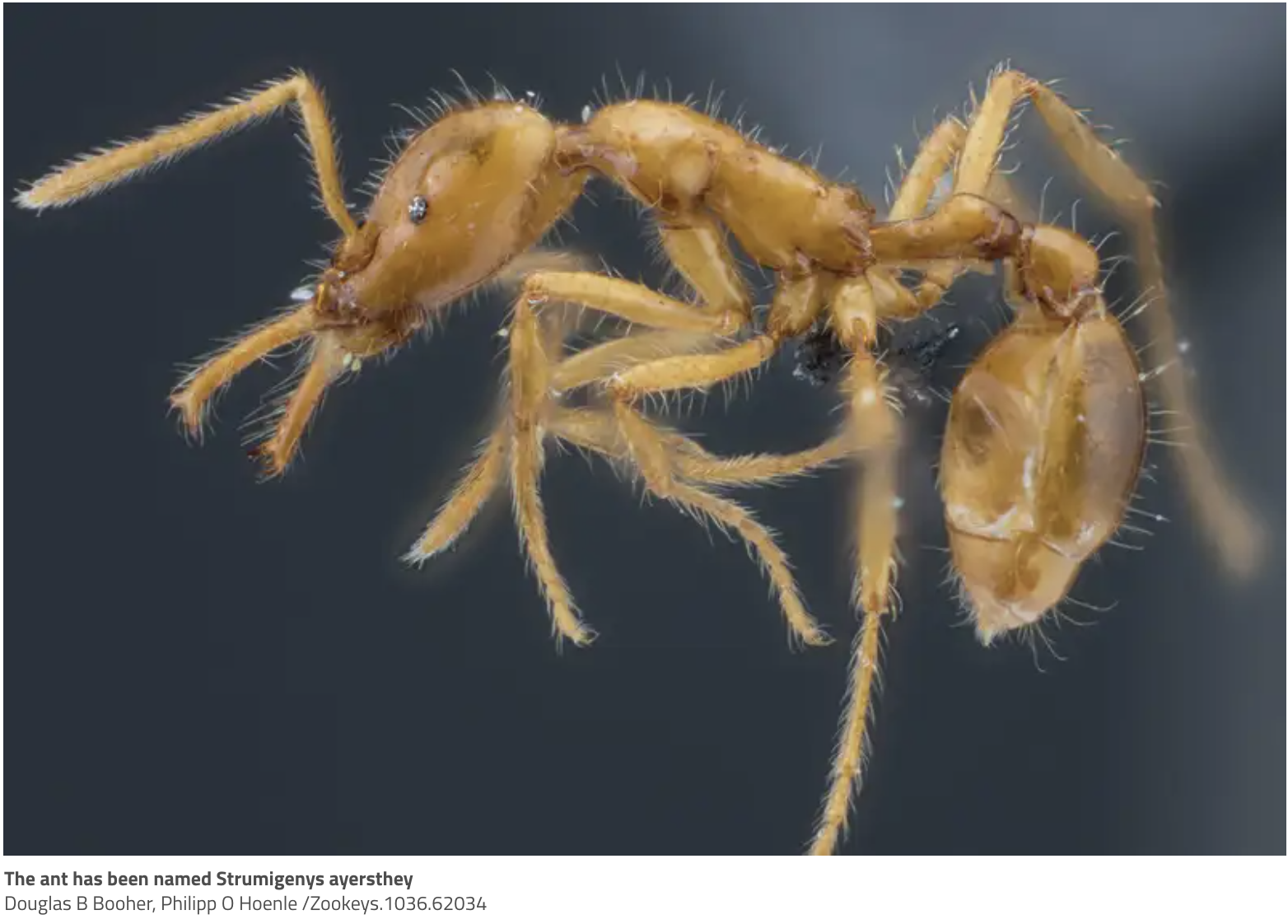 Here’s how they named it.

Etymology. Many cultures have recognized a spectrum of genders between and beyond the binary of male and female. However, by following a rule exampled in the International Code of Nomenclature (ICZN 1999) for how to name species after individuals, one might conclude only binary gender assignments possible when assigning new species names derived from Latin. Dubois (2007) provides clarification to this rule stating that there is no need to amend or Latinize personal names – and therefore no need to assign gender. In contrast to the traditional naming practices that identify individuals as one of two distinct genders, we have chosen a non-Latinized portmanteau honoring the artist Jeremy Ayers and representing people that do not identify with conventional binary gender assignments, Strumigenys ayersthey. The ‘they’ recognizes non-binary gender identifiers in order to reflect recent evolution in English pronoun use – ‘they, them, their’ and address a more inclusive and expansive understanding of non-neutral gender identification. Strumigenys ayersthey sp. nov. is thus inclusively named in honor of Jeremy Ayers for the multitude of humans among the spectrum of gender who have been unrepresented under traditional naming practices. Jeremy was a multifaceted and beloved Athens-based (GA, USA) artist and activist whose humanity and achievements defied the limits of categorized classification. Jeremy brought an intellectual and playful, Pan-like curiosity to every aspect of his life. He was a writer, philosopher, painter, musician, activist, photographer, gardener, and exploder of boundaries who transformed the culture that surrounded him. His deep appreciation of the variety and minute details of the natural world astounded all who knew him. In the spirit of Jeremy, we also propose that the -they suffix can be used for singular honorific names of non-binary identifiers in compliance with the ICZN.

But did he refer to himself as “they”? I doubt it. If Ayers did use “they”, as a reader below points out, why do the very authors of the paper repeatedly refer to him as a “he” or “him”?

The video below by Bret Weinstein and Heather Heying is devoted entirely to this paper, which they see as mostly traditional taxonomy but with some performative wokeness tacked on. As they note, taxonomists often put “i” for names after males (e.g., Atelopus coynei), or “ae” on species names dedicated to a woman, but they add, according to Dubois (2007), that if you look at interpretations of the zoological code of nomenclature, neither “i” nor “ae” endings need be used, and you can just use an unmodified name (Strumigenys ayers).

Ants, of course, have only two sexes, like nearly all animals, so the “they” is meant to make a political point that has nothing to do with ants, nor, in any obvious way, with Ayers himself. It seems to be a way to use the scientific literature to flaunt your ideology. With respect to that, Bret says,  “If you want to have that discussion abut whether or not we should change the language, all right, we can have that discussion; but we are borrowing the scientific literature to pull a fast one, and you’re doing so in the context of creatures that, frankly, so predate any of this this human absurdity that the idea of sort of imposing it on them as if it’s their obligation to broadcast your virtue is just. . . absurd.”

I can’t get as worked up about this as are Bret and Heather, as I’m getting used to and inured to this kind of silly performance, but I do agree with the two that it’s performative wokeness, and will accomplish virtually nothing to help the acceptance of those who use “they” as their pronoun. Nearly all of us are already happy to do that, anyway, and who is going to read this bit of ant literature and feel empowered? Will someone read it and say, “Hey, I should use ‘they’ pronouns more readily if someone wants that.” ? But we already do! I can’t help but agree with Bret that this in indeed “virtue broadcasting”, with the message being, “Here’s a new ant, and, by the way, look how politically savvy and inclusive I am.”

More seriously, does this presage the widespread incursion of woke names and concepts into science? I suspect so, but hope not. Already birders are trying to expunge all the common names of birds which contains a real person’s name, regardless of that person’s “virtue”. At least Atelopus coynei (a frog) is untouchable since it’s the Latin binomial, not a common name (I’s suggest for the latter “Coyne’s poison-arrow frog.”).

54 thoughts on “New woke taxonomy: a special pronoun added to a species’ name”