In this article from Areo, Greg Lukianoff, president of FIRE (the Foundation for Individual Rights in Education), answers some of the criticisms that people on both Left and Right level at those who promote free speech and the First Amendment. It’s short, and you can read it for yourself (click on the screenshot), but I’ll highlight a few items.

A runthrough: speech is not the same thing as violence; free speech implies that words are harmless; the government recognizes limits to free speech (you can’t shout “fire” in a crowded theater if there is none); arguments for free speech are outdated; free speech is the tool of the powerful, not the powerless; free speech applies only to government punishment of expression; hate speech laws reduce intolerance; free speech is a conservative talking point; it’s all right to restrict speech if it promotes civility; restrictions on free speech preserve cultural diversity; and blasphemy should be exempt from free speech.

Lukianoff is an expert in this, and I think his answers are good ones, well worth reading if you’ve encountered some of this before. I want to highlight two points.

1.) Hate speech laws do not reduce intolerance.  This is Lukianoff’s contention, and I’ll reproduce his words and data. Remember that correlation is not causation, so even if areas with hate-speech laws have more hate crimes or incidents than do areas lacking such laws, that does not mean the laws aren’t effective. (Perhaps there would be more incidents if the laws were rescinded.) On the other hand, it shows at least that hate crime laws don’t reduce bigoted attacks below those of nations lacking such laws. The data also also imply that, even if there’s no correlation between the presence of laws and incidence of bigotry, Europe is more rife with bigotry than is North America.

Assertion: Hate speech laws are important for reducing intolerance, even if there may be some examples of abuse.

Answer: Since the widespread passage of hate speech codes in Europe, religious and ethnic intolerance there has gone up. During the same period, ethnic and religious tolerance has improved in the United States.

At least a dozen Western European countries have hate speech laws, many of which run counter to their legal or historical commitments to free speech. But even though those laws have been on the books for years, by most measures Western Europe is less tolerant than the United States.

The figures for the UK are astonishing to me (61 times higher per capita as in the U.S.!), as is the antisemitism index in Western Europe compared to the U.S.

Nor has restricting hate speech prevented the spread of intolerance. In 1986, the UK passed a law against “words or behaviour … likely to stir up racial hatred”; yet, in the 1990s, racial tolerance decreased. Despite having hate speech laws since the 1980s, Germany is experiencing increased islamophobia and antisemitism. France passed its Gayssot Act outlawing Holocaust denial in 1990, yet as recently as 2019 it held a 17% antisemitism index score.

And I don’t just believe that cracking down on hate speech failed to decrease intolerance, I think there is solid grounds to believe that it helped increase it. After all, censorship doesn’t generally change people’s opinions, but it does make them more likely to talk only to those with whom they already agree. And what happens when people only talk to politically similar people? The well documented effect of group/political polarization takes over, and the speaker, who may have moderated her belief when exposed to dissenting opinions, becomes more radicalized in the direction of her hatred, through the power of group polarization.

2.) Free speech, at least in America, doesn’t apply only to the First Amendment. True, the government can’t punish you for what you say, but other people and organizations can.  This is in principle true, but, for all the reasons that we need free speech (Lukianoff goes over Mills’s classic three reasons), it behooves other groups to allow speech as far as they can. This includes social-media organizations like Facebook and Twitter, though of course some private organizations might be damaged by certain types of speech. And private universities, which needn’t adhere to the First Amendment, should still follow the Chicago Principles of Free Expression.

All too often, the widespread promotion of free speech is attacked using the derogatory term “Freeze Peach,” and when I see that I know i’m dealing with a chowderhead. Here’s an xkcd cartoon which expresses the woke “Freeze Peach” attitude, and, as Lukianoff says, it’s “wrong”: 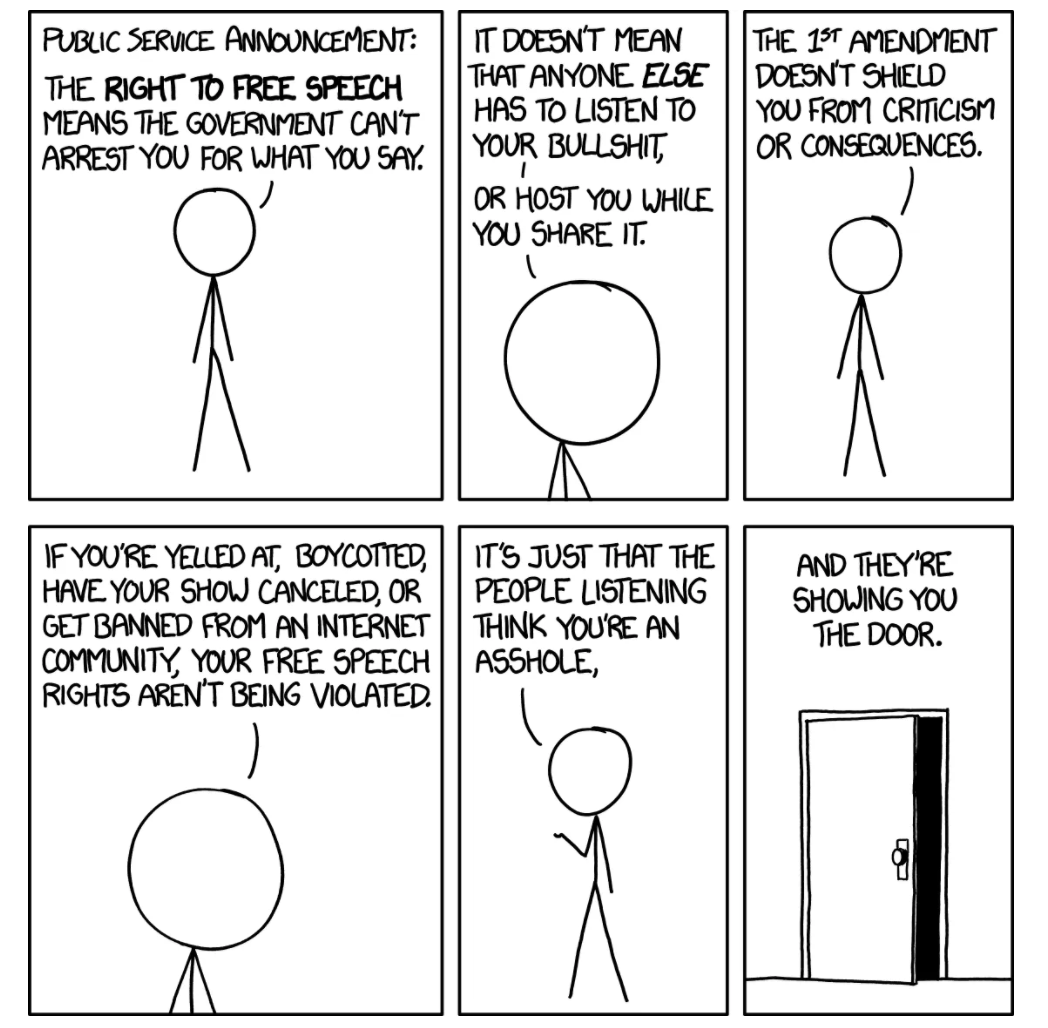 First of all, it implies that people who object to your speech think you’re an “asshole” and are purveying “bullshit”. That’s not necessarily the case, for, as Mill emphasized, you can benefit by listening to your opponents in several ways. It tacitly approves of social media pile-ons as well as deplatforming, and is notably lacking in empathy. (I find that xkcd cartoons often have that hard-nosed attitude.)

Answer: No, the popular xkcd cartoon below is wrong. The First Amendment limits what the government can do, but freedom of speech is something much bigger than that.

This cartoon is often used to dismiss free speech arguments, but it is wrong: it not only confuses First Amendment law with freedom of speech, it doesn’t even get the First Amendment right.

The First Amendment also bars government officials from punishing your speech in many ways that don’t rise to the level of arresting you. To give just one example, since administrators at state colleges are government actors, they can’t tear your flyer from a public message board because they don’t like what it says.

A belief in free speech means you should be slow to label someone as utterly dismissible for their opinions. Of course you can kick an asshole out of your own house, but that’s very different from kicking a person out of an open society or a public forum. The xkcd cartoon is often used to let people off the hook from practicing the small d democratic value of listening.

The last paragraph, which I’ve put in bold, is absolutely right. (NYT: are you listening?) There’s an increasing tendency to deal with speech you don’t like not by counterarguing, but by deplatforming, dogpiling, or implying that someone (J. K. Rowling is one example) is a bad and hateful person. Like those who go after Rowling, or young-adult authors who are doing their best, or the irredeemable transgressors in the knitting community, this xkcd cartoon lacks empathy. It does have a point, but doesn’t make it very effectively, and, as Lukianoff says, it doesn’t even get the First Amendment right.