Today we have bee photos from reader Ruth Berger in Germany. Her notes and IDs are attached, and you can enlarge the photos by clicking on them. All photos are “copyright Ruth Berger.”

Here are some of my pics of wild/native bees, taken with a small automatic handheld camera not really suited for the job. I’d like to keep the copyright (already used some of them for a commercial publication and might do so again), hope that’s not a problem.

I’ve chosen Palearctic species to provide some novelty to US readers. All photos were taken in Frankfurt, Germany, near what used to be a cluster of chemical and pharmaceutical plants before globalization transported production to countries with less regulation. Building used to be prohibited in the vicinity because of concerns about chemical accidents, which made it into a kind of unintended nature reserve on urban land, with an abundance of wild pollinators, their parasites, and birdlife. The soil is sandy from river sediment, the climate is very mild for Germany. Part of the area will be ‘developed’ in the coming years, now that building restrictions have fallen with the demise of the industry.

This is a furrow bee, most probably a female of Halictus scabiosae (great banded furrow bee), a warmth-loving species, resting and sheltering in a Geranium pratense blossom on a cool and windy September day. 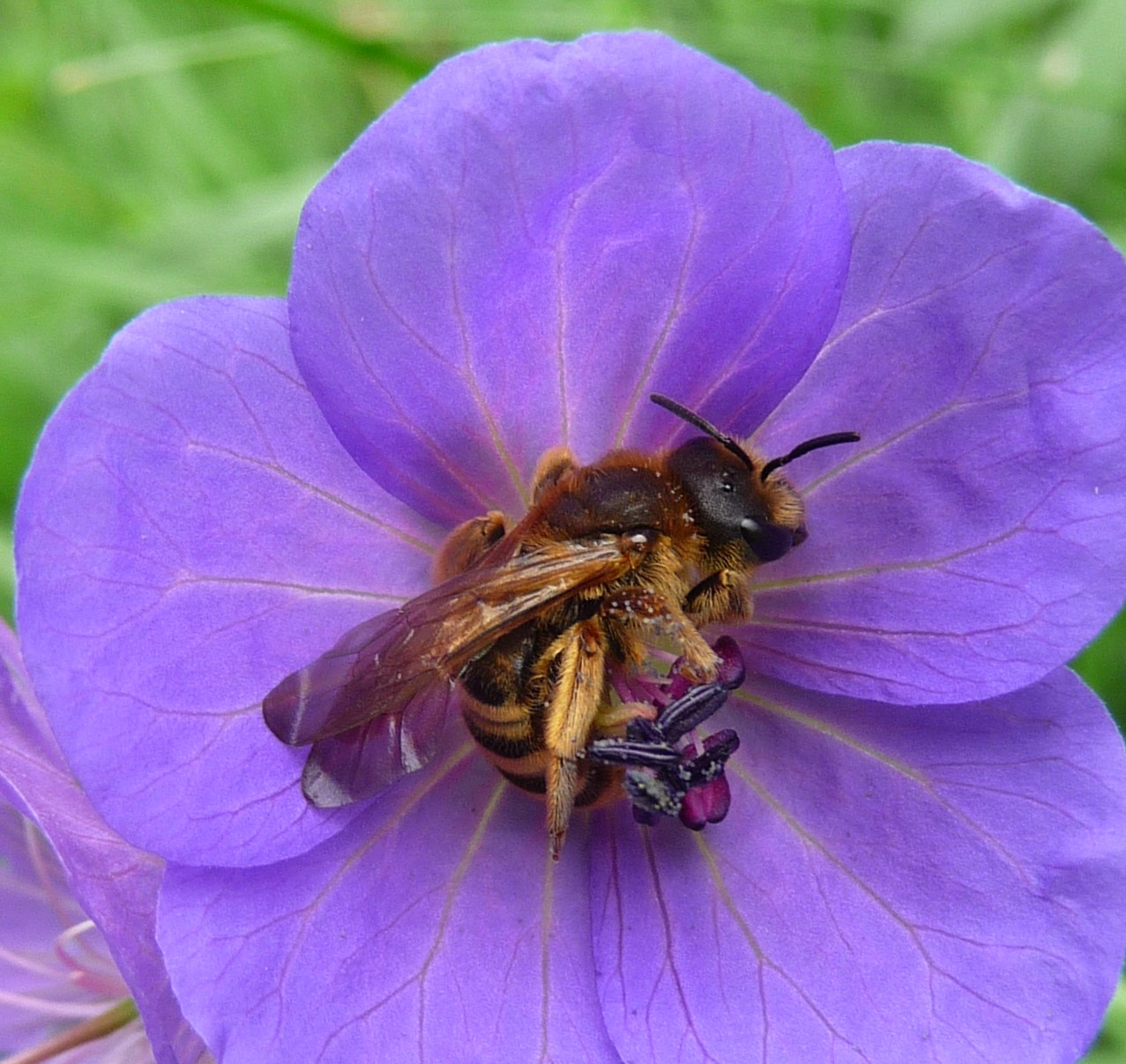 This is a bryony sand bee (my translation of the German name, Zaunrübensandbiene, Latin: Andrena florea), unsurprisingly feeding on bryony. This seems be to a largely Central European species, it certainly is abundant here in Frankfurt. 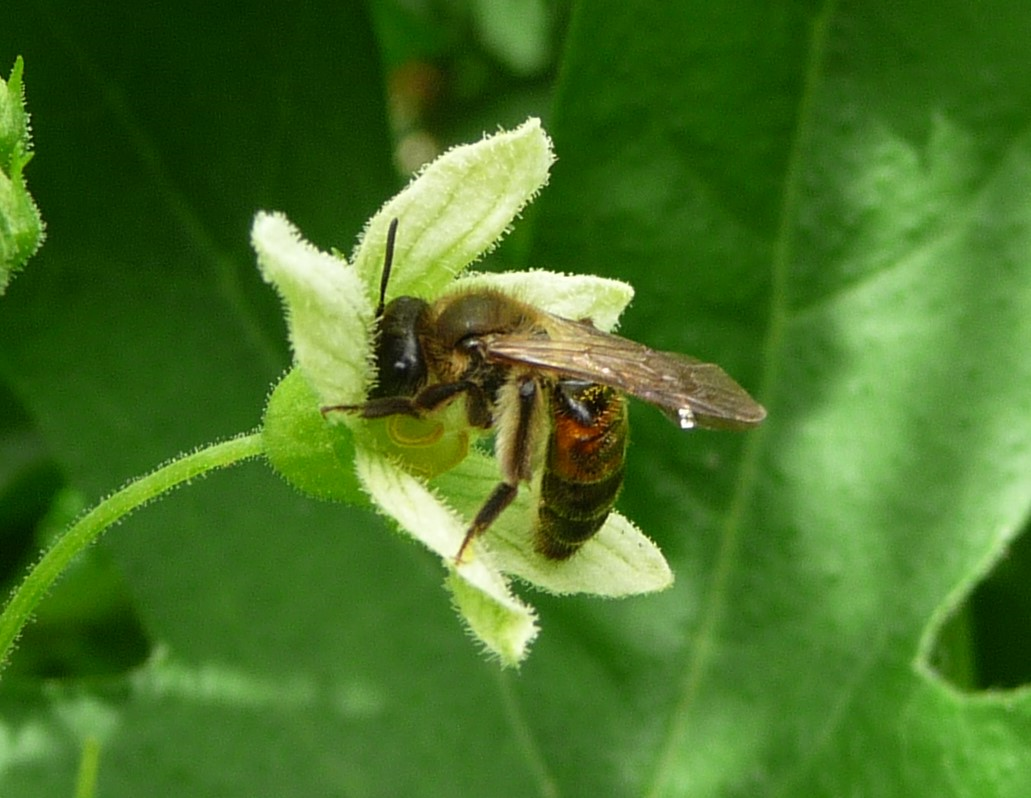 This furry thing, taken a few days ago (at 12 degrees C), is probably a male Osmia cornuta (yellow facial coloring due to pollen?), the European orchard bee, another Central European species, on snowdrops. On the second picture, it’s tackling a snowdrop blossom from below. 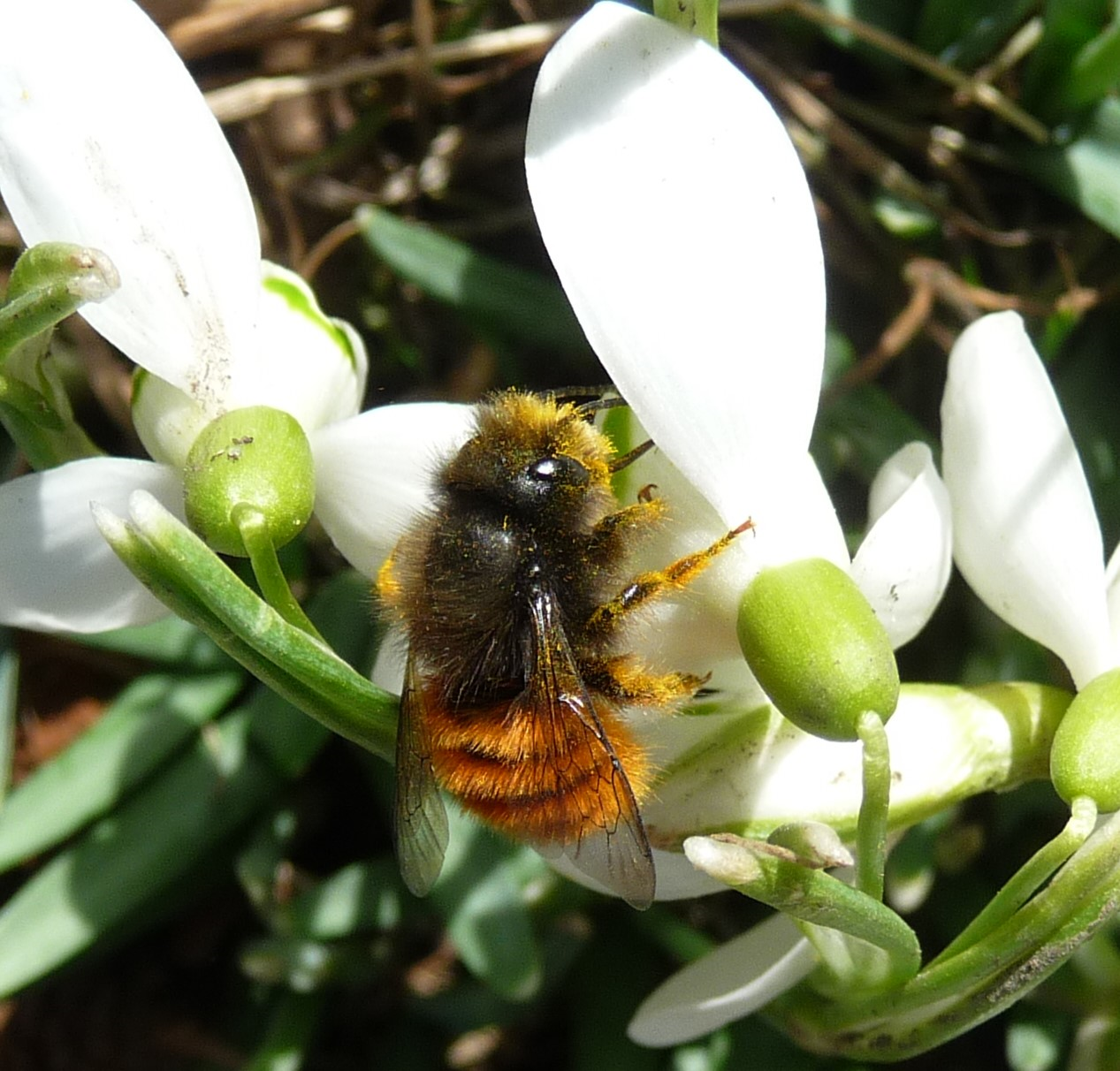 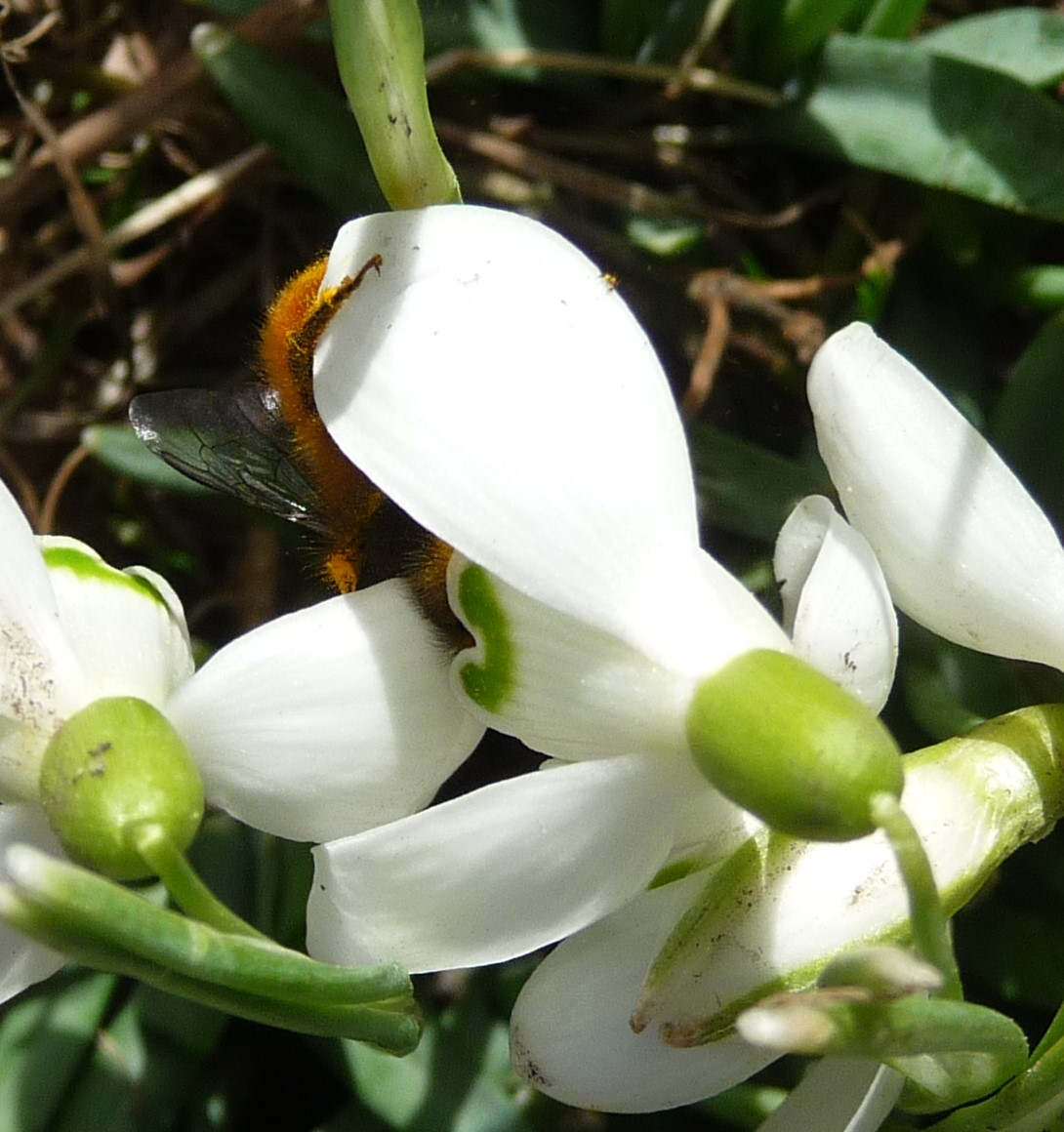 The next one is a parasitic cuckoo bee, Sphecoides albilabris (f.), “large blood bee” in German, feeding on Berteroa incana, a plant that attracts lots of wild pollinators. Blood bees are solitary, but I sometimes see them in groups for copulation. Their brood eats the eggs and food stores of other bees, normally Colletes cunicularis, but I suspect it parasitizes Halictus sp. here, which are far more abundant than their regular victims. 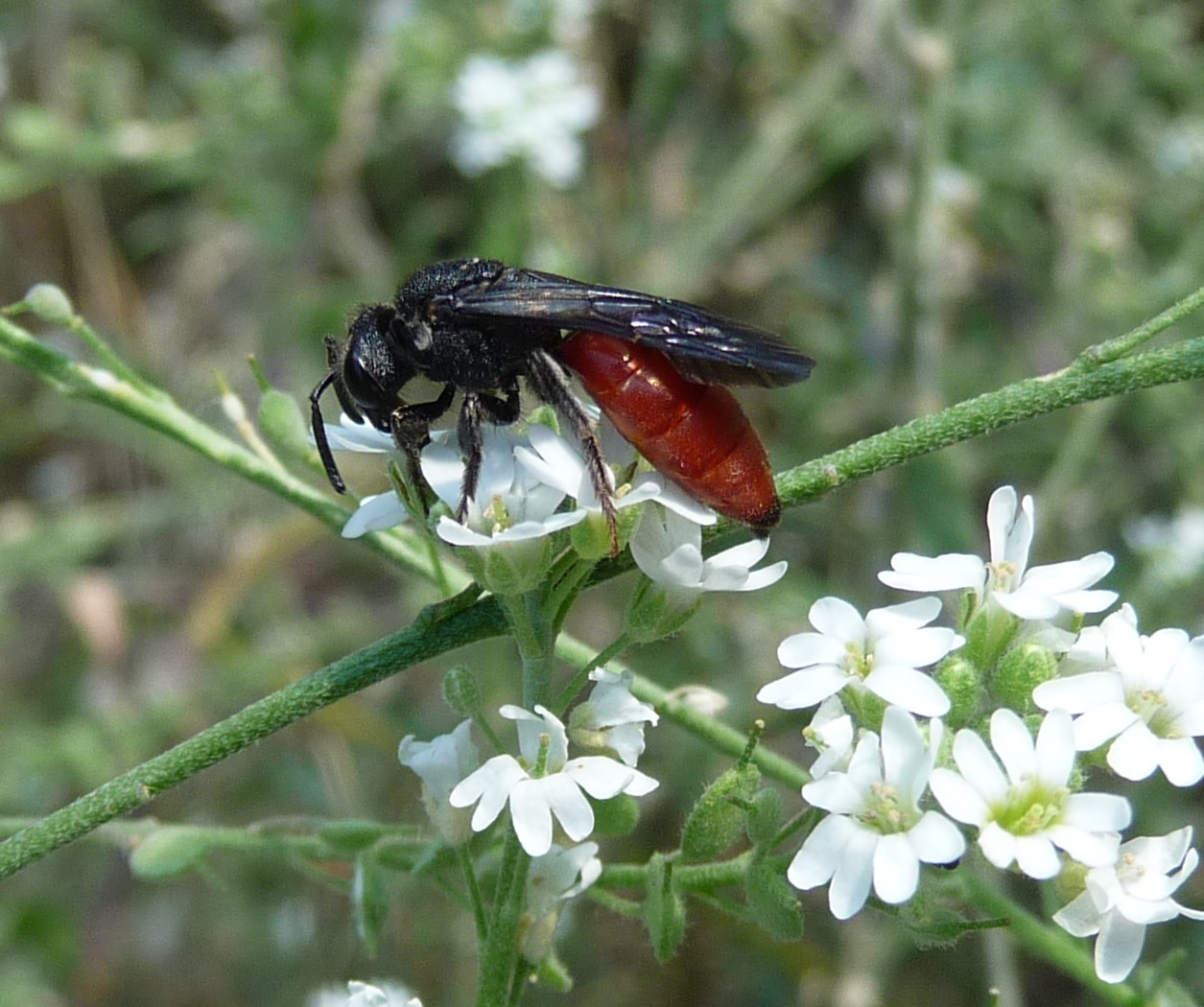 After so much red coloring, here is a bee in dark metallic blue, Ceratina charybea, a small, warmth loving species rare in Germany, all of whose brood at this site was destroyed when local authorities decided to clear away the dry thistle stalks they nested in. 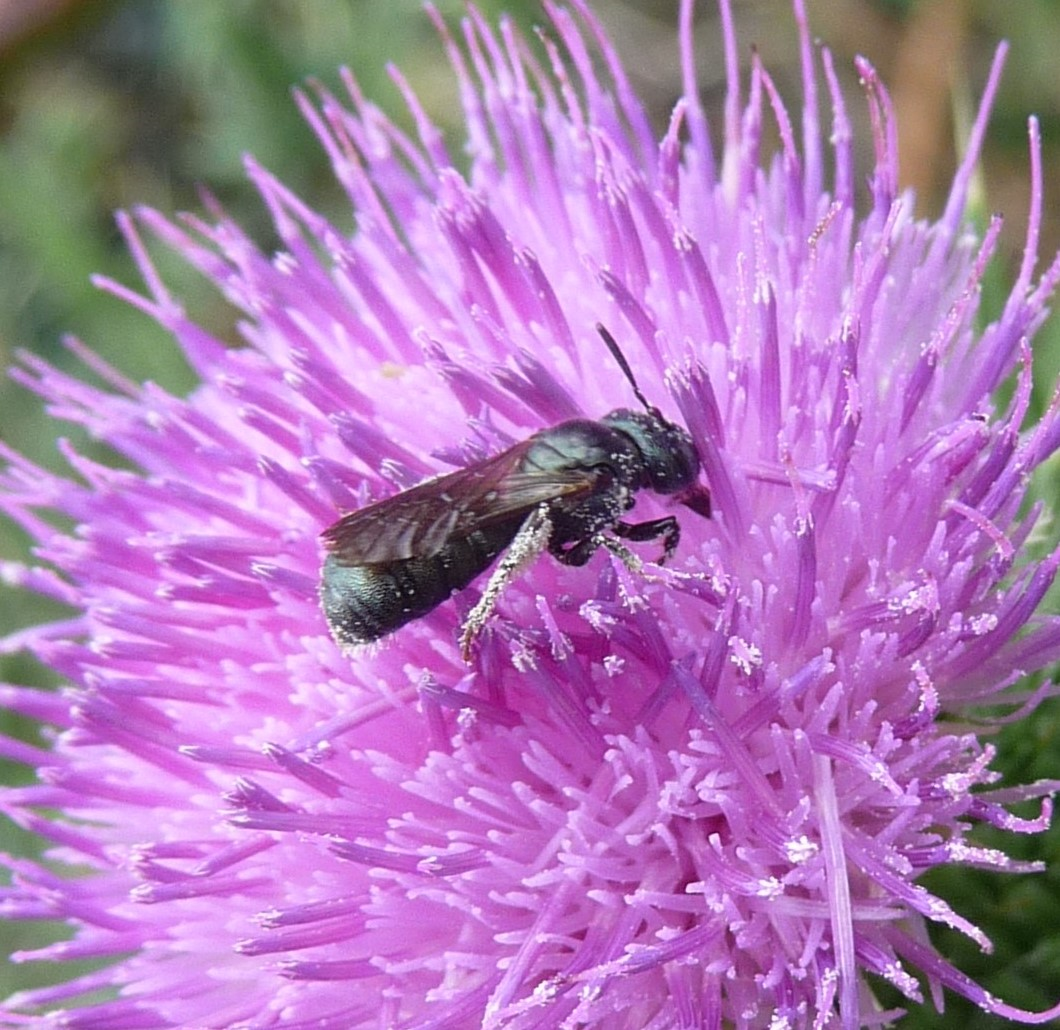