From apost we have a story and a video about a boy who rescued two animals from a fire, with one (below) becoming a house pet.

A wild bobcat almost died in a wildfire. He was rescued by a young boy, who took him home and adopted him.

Now, this wild animal acts like a domestic house cat, with ample love for the boy who saved his life.

This video shows some of the bobcat’s heartwarming affection for his savior, as he snuggles and caresses his owner. It is so sweet to see how a wild animal can bond with a human.

The boy, George Kraus, rescued this bobcat as well as a young fawn from a fire in his town. The animals were having trouble breathing because of smoke inhalation.

Young Kraus brought them home and cared for them until they were well. It took some time to earn each other’s trust, but before long the big cat became part of the Kraus family.

Benji loves playing with toys and being with his family. He takes naps on the furniture. He especially loves snuggling, as the video clearly reveals.

I would not try this at home, but I suppose it’s possible. I hope the cat doesn’t decide one day to nip a little too hard! The video, however, is heartwarming.

And what do they feed the thing? Is it even legal to own a bobcat?

You know, well before Biden took office we heard exciting rumors that the family was going to get a cat in the White House. POSH! PIFFLE! LIES! No cat has shown up in the first hundred days, although of course there are d*gs.  So I was a bit dubious when I saw this headline from the Washington Post.

Is Biden “reaching across the aisle” to cat lovers?  Well, don’t hold your breath. We’ve heard intimations like this for months:

Dogs seem to have a way with world leaders. For decades, the powerful have often opted for canine companions. Canadian Prime Minister Justin Trudeau has one. So does French President Emmanuel Macron and Russian President Vladimir Putin. The Obamas were dog owners, too.

But President Biden is taking a path less followed with a first cat, which is expected to join the Biden family’s two German shepherds, Champ and Major, in the White House. (Donald Trump broke ranks when he became the first U.S. president in 150 years not to have a pet.)

First lady Jill Biden told NBC News on Friday that the Biden’s new cat was “waiting in the wings,” although she declined to say exactly when their feline friend would arrive. She gave no hint on the name, but appears to offer a gender reveal.

“He …,” Jill Biden started, then corrected herself. “She is waiting in the wings.”

Waiting in the wings my tuchas.! It’ll be a cold day in July when the Bidens get a cat. But one can still hope. . .

Biden’s rescue dog, Major, has already had some special coaching to prepare for life with a cat as part of his remedial training following two White House biting incidents.

Biden may not earn full “cat person” credentials in some eyes for sharing his affections with a pair of hounds. Still, the cat club is a small group for politicos at the top.

The genuine ailurophiles mentioned include the great Jacinda Ardern (whose polydactylous cat Paddles was run over by a car, and so no longer exists), and Larry, the Chief Mouser to the Cabinet Office, who does exist.. However, all the rest of the moggies mentioned are former First Moggies, like Socks, the Clintons’ cat, or the cat of Stephen Harper, Canada’s former PM. They even mention Winston Churchill, for crying out loud! Couldn’t the paper be arsed to find out existing First Cats? Or maybe there are none save Larry. . .

From Bored Panda we have a series of cartoons by Russian artist Lingvistov about what it’s like to live with a cat (click on screenshot). Anybody who’s had a mog will recognize the tropes; I’ll show my favorite five of the 30 cartoons given. 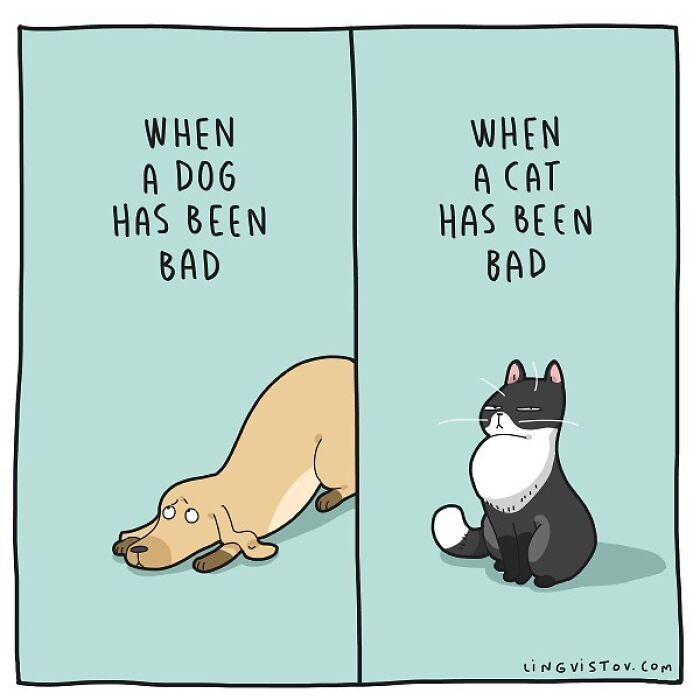 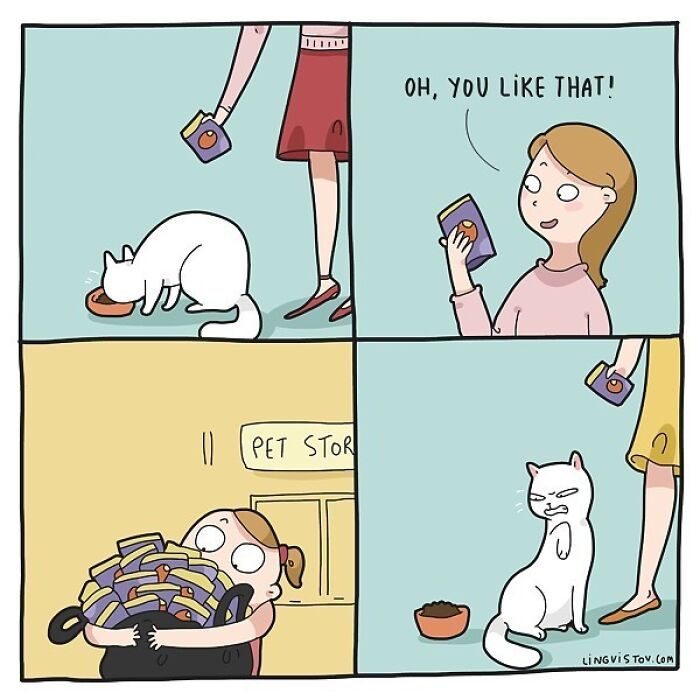 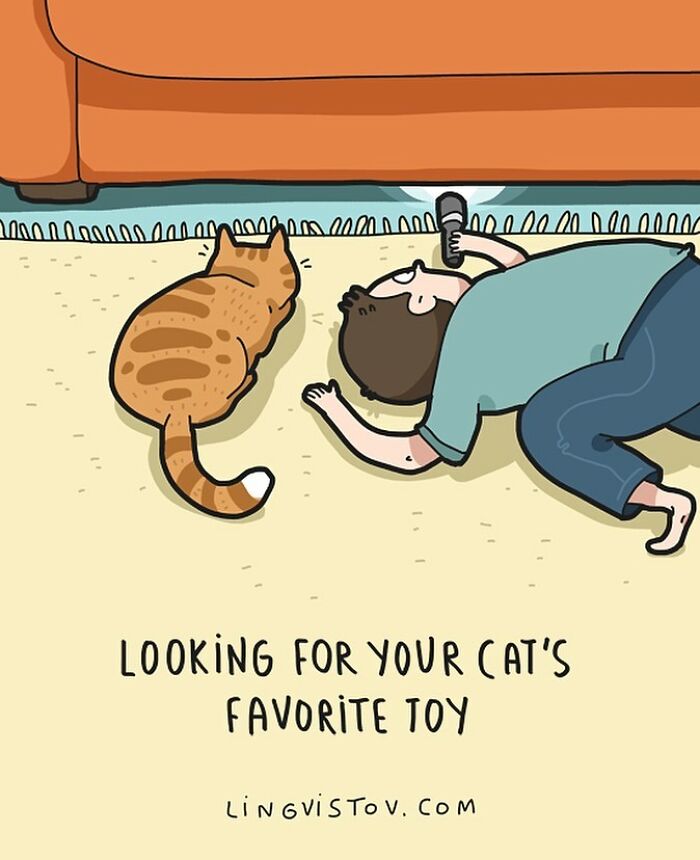 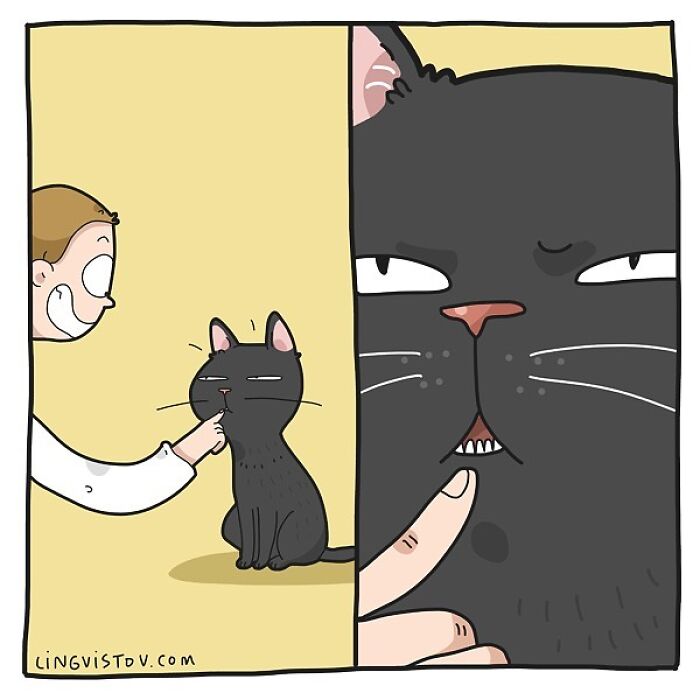 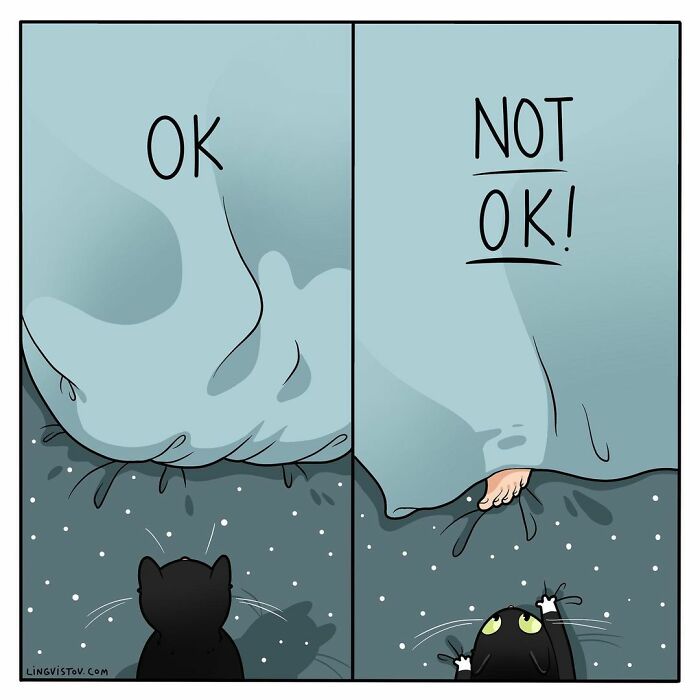 31 thoughts on “Caturday felid trifecta: Bobcat thanks boy who saved it from fire; Biden’s “Schrödinger’s Cat”; Illustrations of what it’s like to be a cat’s staff”