This video from the “Owlkitty” YouTube channel, which recounts the (often fictitious) adventues of a long-haired black cat, purports to show how OwlKitty moves around at night. The conceit is that the kitty is paranormal, and also that this takes place on a single night. The former is of course bogus, and the latter probably at best a melange of several night. Note the vomiting cat, guaranteed to wake anybody up! And if you have a cat, you know the horror of stepping in cat vomit in the dark.

Winston is absolutely obsessed with food and will do anything to get his paws on it. He even tries to eat things that aren’t food, and his family thinks it’s a habit that formed when he was a stray living on the streets. Even though he always has plenty of food now, he’s still obsessed with it, and his family has just accepted that it’s one of his quirks.

“Since he is obsessed with food, and just eating in general, he will literally eat his toys (not kidding), especially the soft ones,” Emily Tan, Winston’s mom, told The Dodo.

All photos by Emily Tan: 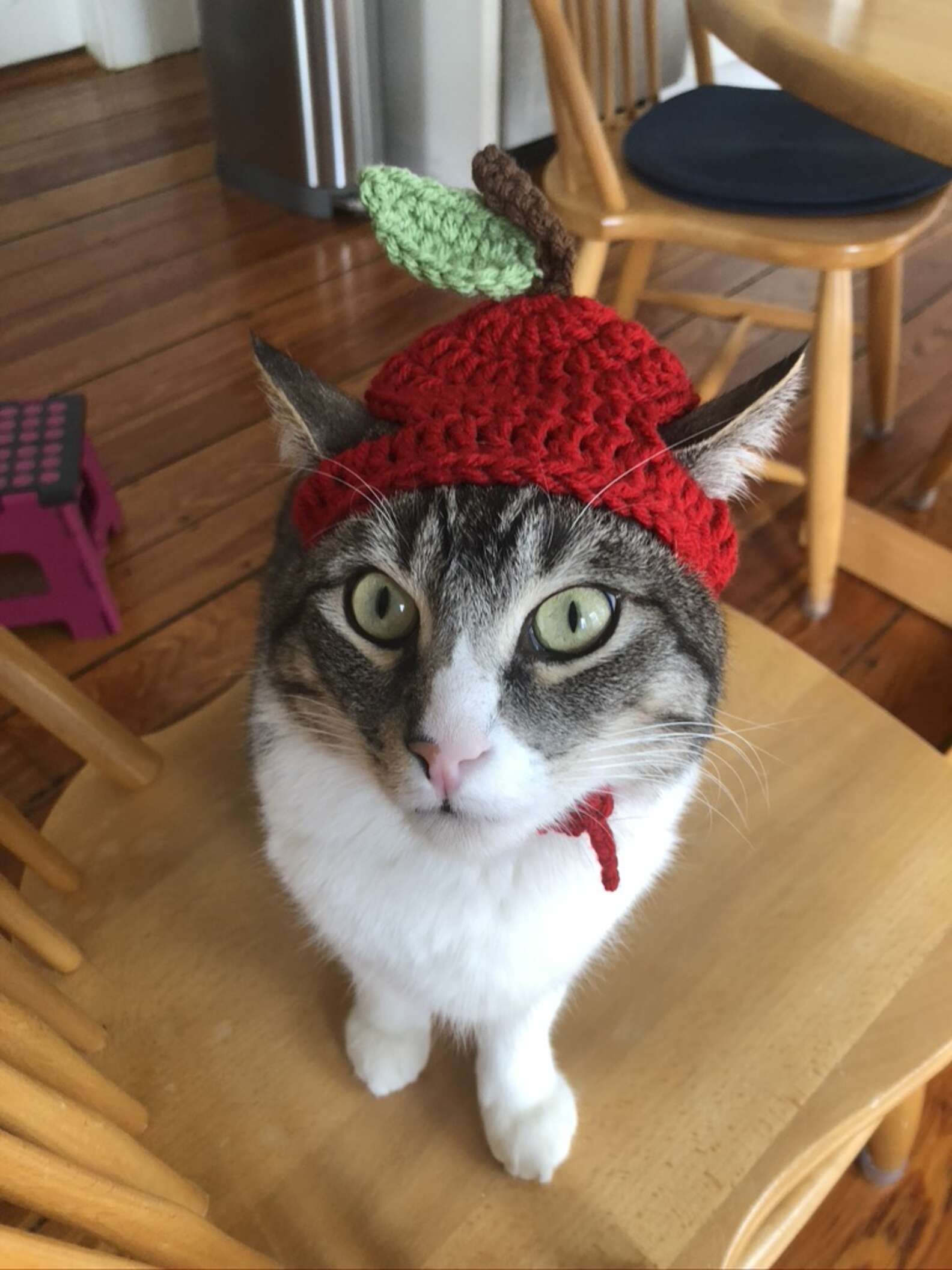 One day, Winton’s parents had just finished a bottle of cinnamon and left the empty bottle on the windowsill to be brought out to the recycling bin later. Instead, Winston found it, knocked it into his box and decided that it was officially his new favorite toy. 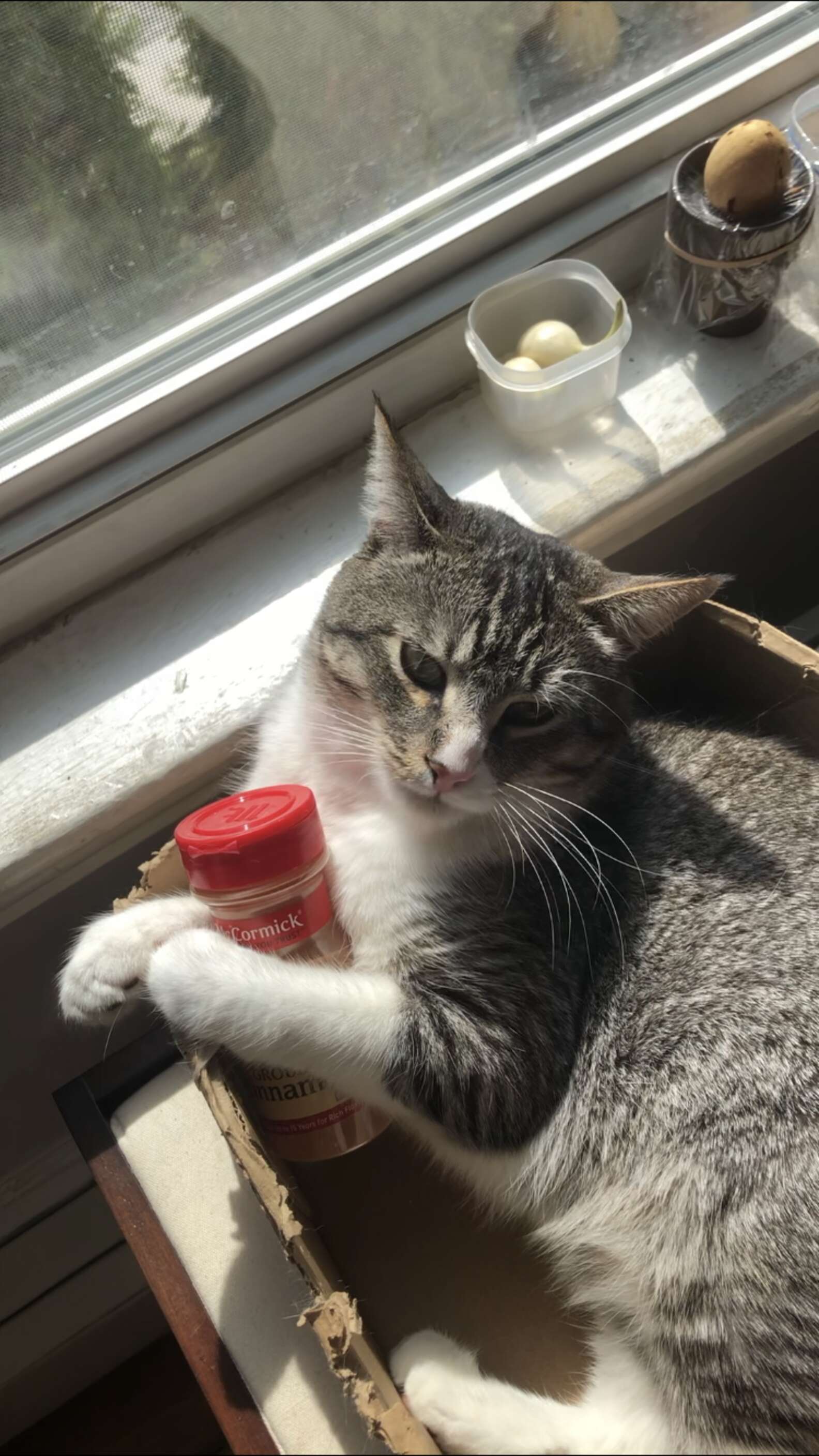 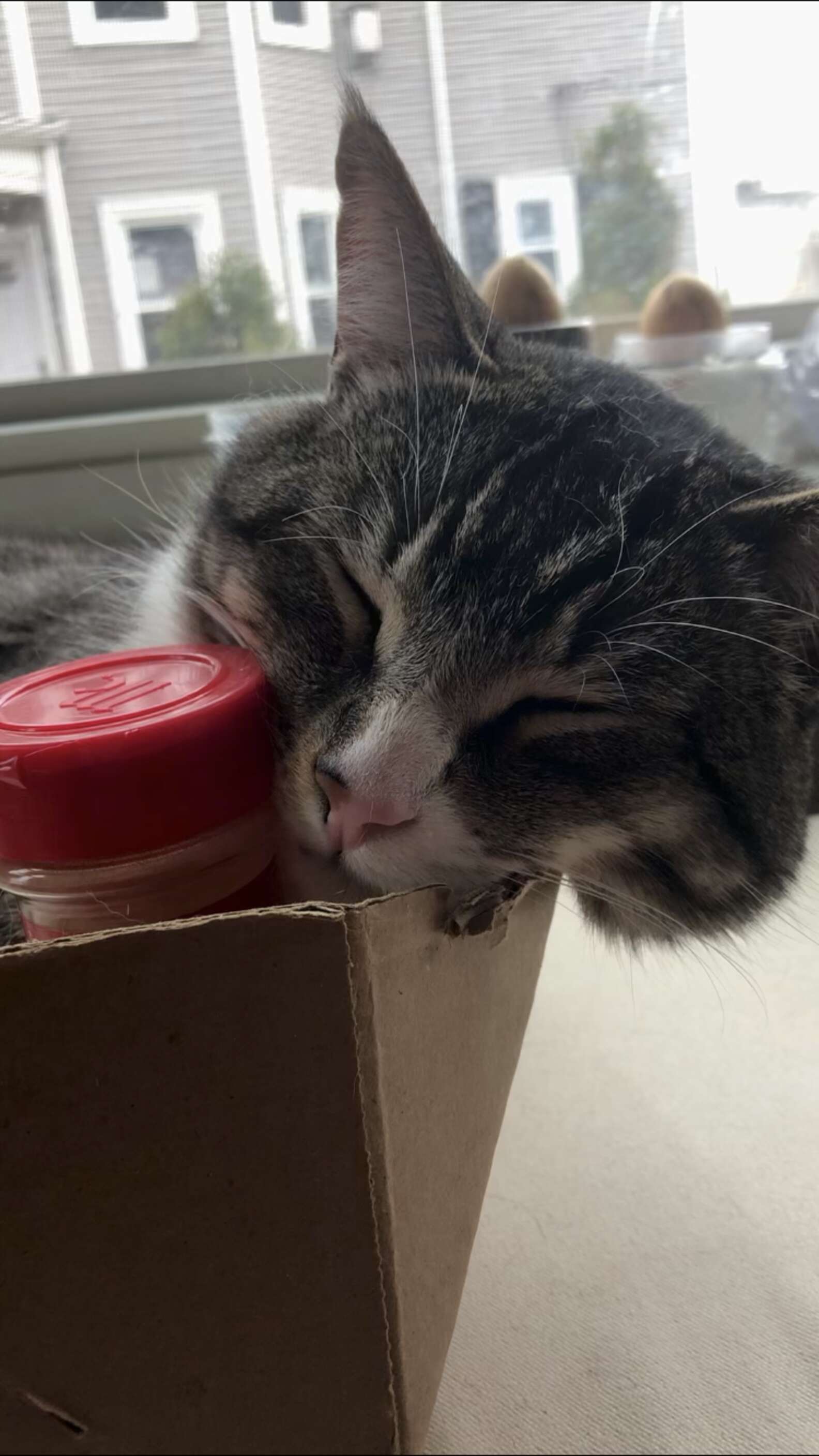 “He has a very strong grab-and-pull reflex, so any time he’s snuggling with the bottle, he is very resistant to it being taken away,” Tan said. “He’ll hug it to his chest with both of his arms. It’s so cute.”

Funnily enough, compared to his other toys, the cinnamon bottle is actually a great alternative plaything for Winston the toy destroyer. He can’t chew it up the same way he can other toys, so he can keep playing and cuddling with it for as long as he wants. 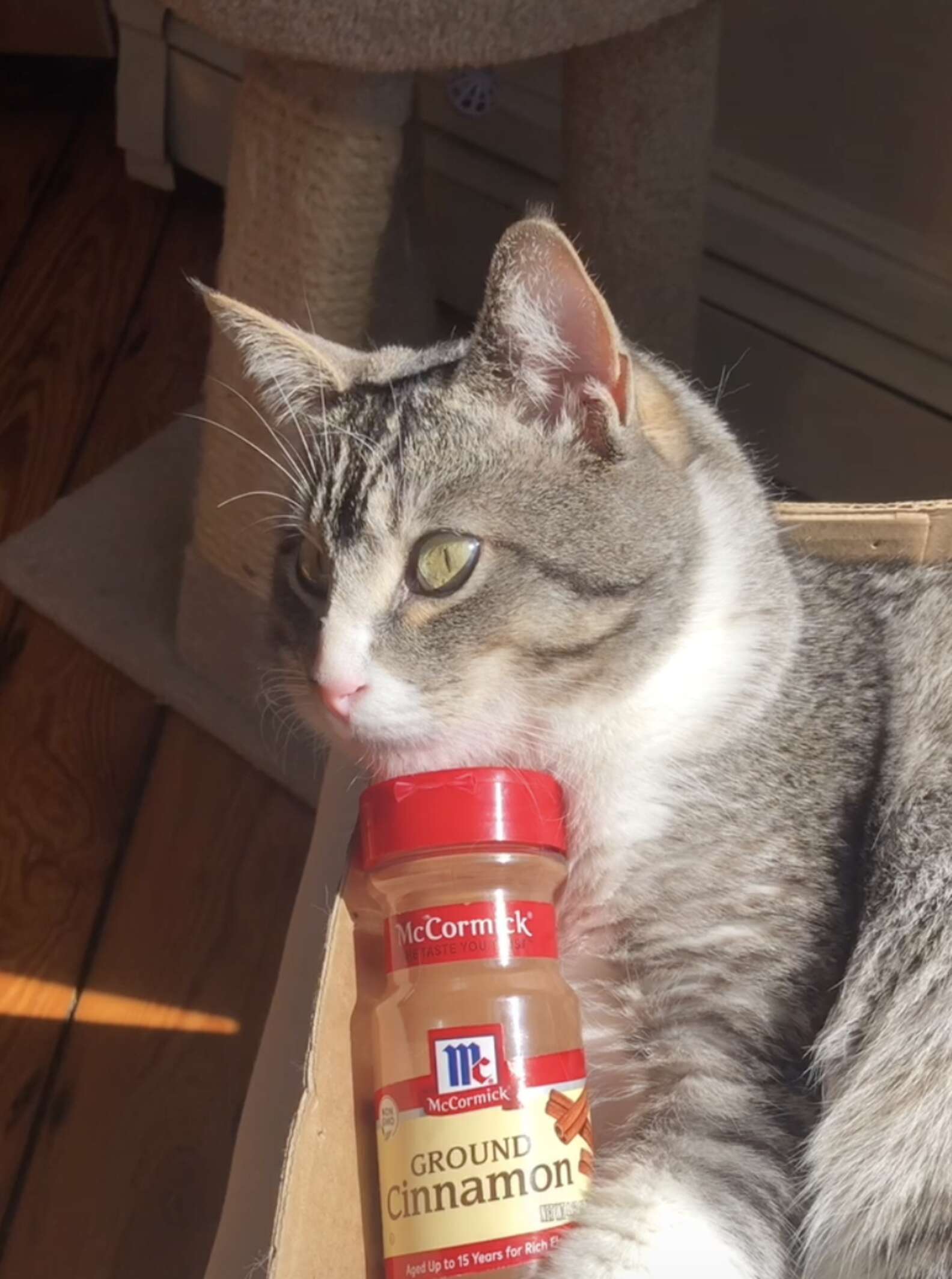 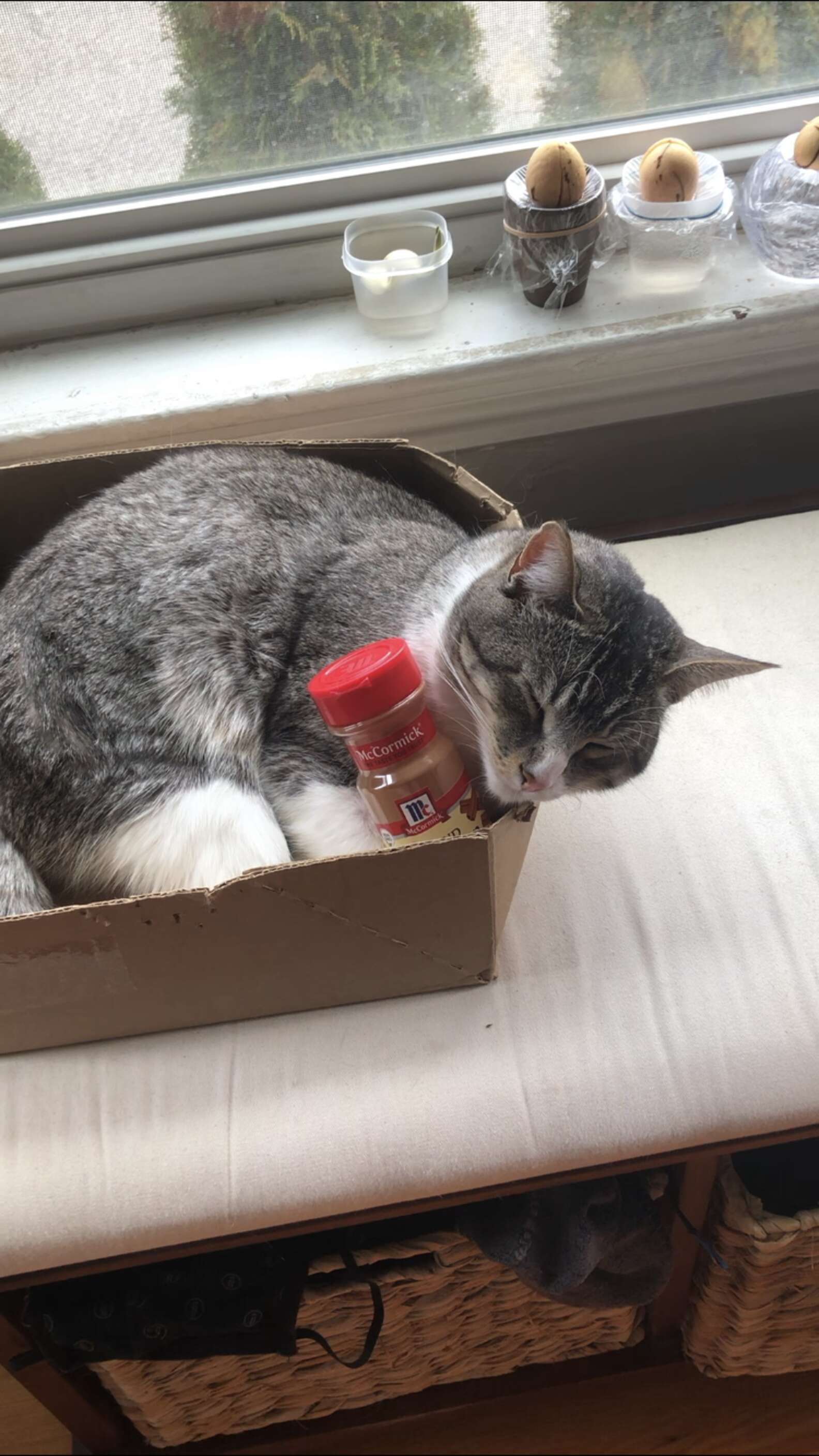 Now, Winston loves cuddling up with his cinnamon bottle every chance he gets. Occasionally he’ll knock it out of his box and chase it around, but for the most part, he just loves holding it. It’s his new best friend, and he’s not afraid to show it.

“He’s been hanging out with cinnamon for a few months now,” Tan said. “It just kind of lives in his box, and he hugs it all day.”

You might try this with your cat, but make sure the bottle is empty, for several sites (e.g., this one) say that sniffing cinnamon can be toxic for cats.  And another site says this:

Most cats (but definitely not all) don’t like the strong smell of Cinnamon which is why it is popular as a cat deterrent.

As a cat owner if your pet shows an interest in Cinnamon you should not let them ingest it. While a tiny amount won’t do any harm, any more than that can lead to vomiting.

Cats are different. Most will hate it but a few cats like Cinnamon and find it stimulating.

Winston is clearly one of the latter!

This article from ScienceAlert disappointed me, as the title was misleading (click on screenshot); it also uses “genius” as an adjective, which I detest.

How do they work? Well, first of all the study was done in rats, not cats. And the results are confusing; here’s a bit of the summary:

The research required expertise from a wide variety of scientific fields, including neuroscience and continuum mechanics. Part of the mechanical model involved the application of beam theory, which is often used in engineering and geology to work out how bending materials or entire tectonic plates might interact with each other.

Here, beam theory was applied to the interaction of the whisker and its follicle. The team discovered that the change in shape of the whisker – in many ways “just a deformable beam interacting with springs” – was likely to be the same whether it was actively pressing against something or passively being touched by something else.

“In other words, the same group of sensory cells will respond when the whisker is deflected in the same direction under both conditions. This result suggests that some types of experiments to study active whisking can be done in an anesthetized animal.”

“Active whisking”? They didn’t bother to explain it, and I’m not quite sure what it is. It’s clear that the whiskers convey some tactile information to the cat, and it’s equally clear that that information is useful. But exactly how that information is used, well, we’re in the dark, at least from this article. Does it tell the cat how narrow an opening lies ahead? Does it give information about prey? Your guess is as good as mine, and I can’t be arsed to look up what must be an extensive literature on whiskers. One thing is for sure: the article above does not tell us much about “how whiskers actually work.”

Lagniappe from We Love Animals. This is a video of Pusic the cat, a stray rescued in 2014 from the streets of Belaurus. The staff quickly discovered that Pusic loved toilet paper as an object of play. So they went whole hog:

They bought 100 new rolls of toilet paper and placed all over the living room – on the wall, on the floor, and on the ceiling. They set up a camera as well to record how Pusic was let loose in his new playroom. How’d the cat react? A brain blast for them! They are unpredictable!

After giving Pusic a few hours in the toilet paper-filled room, his parents started cleaning and planning to save it for Pusic’s enjoyment. “We try not to waste resources,” he said. “The toilet paper will be useful for future games and for new cat toys.”

Heeeere’s Pusic! No great love hath a staff for its cat! 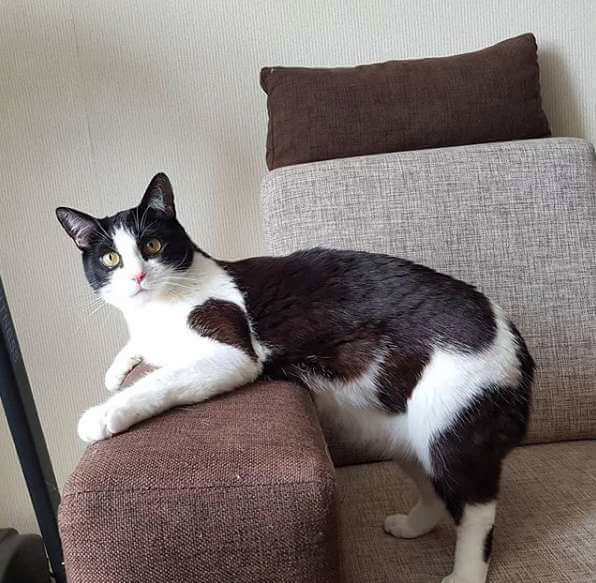 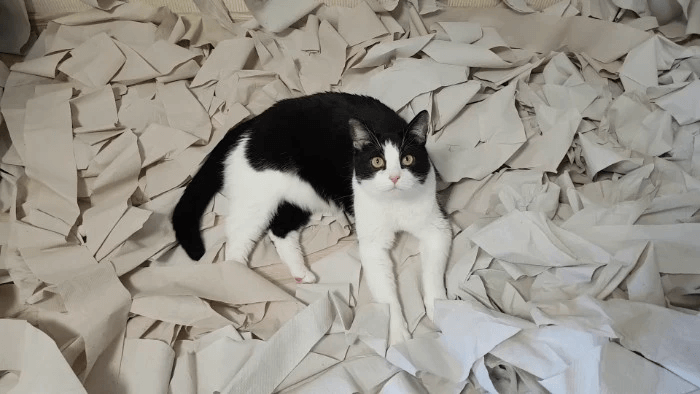