The Thomas B. Fordham Institute, whose motto is “Advancing Educational Excellence” has the following as its mission statement:

High Expectations for All Schools

We believe that all schools that are supported with public funds—whether in the district, charter, or private school sector—should be held accountable for helping their students make academic progress from year to year. Under ESSA, most states have built accountability systems that are better than ever. Now the challenge is to make high expectations a reality at the classroom level.

They also say that charter schools and Catholic schools have been successful in giving good educations to children who have grown up in poverty. Wikipedia notes that “The Thomas B. Fordham Institute is an ideologically conservative American nonprofit education policy think tank, with offices in Washington, D.C., Columbus, Ohio, and Dayton, Ohio. The institute supports and publishes research on education policy in the United States.”

I say this because, although articles like the one highlighted here should be judged on their own, one should know the agenda of the venue that’s publishing them. What we have is a statement by Robert Pondiscio, who is described this way:

Robert Pondiscio is senior fellow and vice president for external affairs at the Thomas B. Fordham Institute. He writes and speaks extensively on education and education-reform issues, with an emphasis on literacy, curriculum, civic education, and classroom practice. His 2019 book, How the Other Half Learns, based on a year of observations at New York City’s Success Academy network of charter schools, was praised as “morally disturbing” and “unsparingly honest” by the New York Times. After twenty years in journalism, including senior positions at TIME and Business Week, Robert became a fifth-grade teacher at a struggling South Bronx public school in 2002. [JAC: He did that for five years.] He subsequently served as vice president for the Core Knowledge Foundation, and taught civics at Democracy Prep Public Schools, a network of high-performing charter schools based in Harlem, New York.

A commitment of five years in a South Bronx public school is not to be taken lightly, nor as a mere experiment. My own judgment is that the guy is truly committed to improving secondary-school education for all, and was trying to see if his principles worked in the classroom

While Pondiscio may have an agenda for promoting charter schools, he’s also one of many teachers who seems committed to helping all kids learn, and, in the article below, argues that Kendi-an style “antiracist” teaching is not the way. In fact, Pondiscio says that, while teaching in the South Bronx public school, he says he never taught a single child who was white. Note, too, that it was a public school, not a charter school.

Click on the screenshot to hear his plaint, which is that he thinks that all children should be taught to strive for excellence, with members of different races all held to the same high standards. 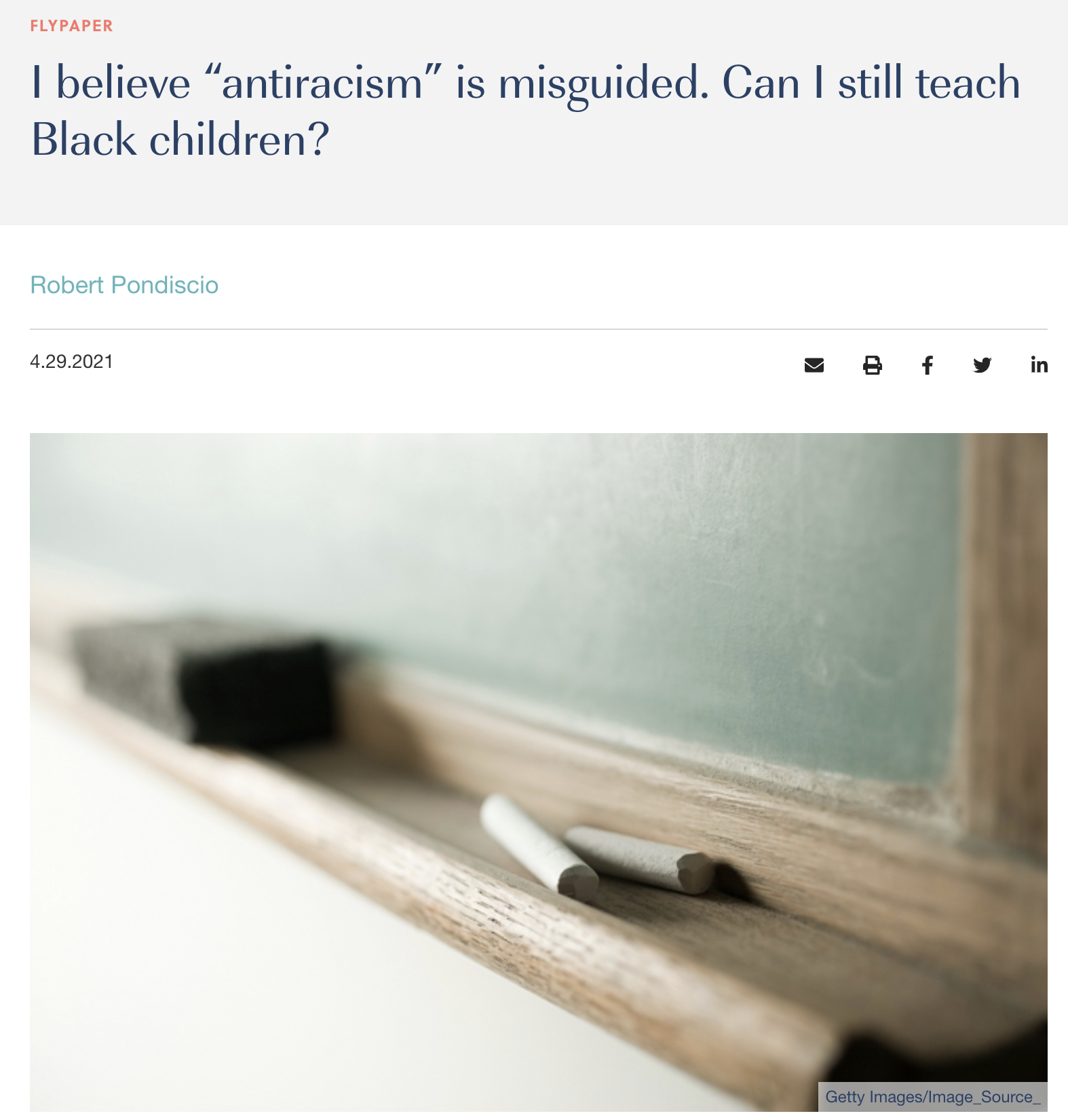 This guy hardly seems like a racist. Here are a few statements he makes:

The point is so obvious yet it cannot be said enough: We do not give families of color and those in poverty the same range of options and quality of education that White and affluent families often take for granted. It’s why I became a teacher, starting in 2002. I taught full-time for five years in a public school in the South Bronx, and intermittently since at a pair of Harlem charter schools. What drew me to this work and keeps me engaged in it is the manifest unfairness of American education to low-income, Black, and Brown children who comprise, without exception, every student I’ve ever taught.

For most of those twenty years, I’ve held a set of assumptions and ideals about what it means to be an effective teacher of children of color (and frankly, children of any race or background). It means holding every pupil to high standards and expectations for academics and classroom conduct; offering a rich and rigorous curriculum, taught as engagingly as possible; and fostering a school culture and climate that valorizes student achievement. Above all, it means holding firmly to the conviction that children do not fail. Rather adults fail children when schools do not deliver any or all of these ingredients.

Nor does he favor a “white curriculum” that sanitizes history or ignores contributions of different groups:

. . . . There can be no question that every child in an American K–12 school should have the opportunity to see their history, heritage, and culture reflected in their education. No part of me is interested in imposing a “Eurocentric” curriculum on children, venerating “dead White males,” or presenting anything less than a clear-eyed view of American history. But efforts to “decolonize” curriculum, “disrupt texts,” or other efforts to de-emphasize “Whiteness” in curriculum seems less likely to liberate Black and Brown students than to hold them further back. This is not parochialism, but a reflection of how language proficiency works. It rests on a large body of common background knowledge shared between readers, writers, speakers, and listeners. It is uncomfortable to acknowledge—yet we must—the degree to which this both reflects and grows organically from the knowledge, allusions, and idioms of the culture that dominates it. In a diverse and plural society, language is a vernacular engine, borrowing words and allusions at a dizzying pace, but that is not a process that can be dictated or controlled. A clear-eyed view of language proficiency obligates us to expose children to the full range of taken-for-granted knowledge that their fellow citizens possess. At present, that requires familiarity with a substantial (if perhaps declining) amount of Western thought, literature, history, science, and art. To pretend otherwise is to risk cementing disadvantage in place, or to embrace a separatist impulse, neither of which can be countenanced.

If the education reform movement has accomplished nothing else, it has made it unacceptable to evince any belief but the opposite one: The achievement gap is evidence of institutional failure, not a failure on the part of Black test-takers. Discrediting any reference to a racial achievement gap is counterproductive to the interests of students of color. The NAACP, the National Urban League, La Raza, and nine other civil right groups have denounced anti-testing efforts to “hide the achievement gap,” noting that test data “are critical for understanding whether and where there is equal opportunity.” Ian Rowe, a Black intellectual, Fordham trustee, and charter school founder, insists that antiracist policies and practices are becoming “the unintended, modern day version of the soft bigotry of low expectations.” I strongly agree. Does saying so render me unfit to teach Black and Brown children?

I wasn’t aware that organizations like the NAACP or the Urban League, as well as other civil rights groups (see the link), have denounced anti-testing efforts, though Ibram Kendi claims that these standardized tests are racist. But, as the groups say in their joint letter, “We cannot fix what we cannot measure.”

What Pondiscio objects to is differential treatment of students of different races, holding them to different expectations. Some of this comes from the view that different cultures (read “different races”) have different styles of learning. But as Pondiscio avers, “close reasoning, the written word, and objectivity” should not be seen as “white” practices that are irrelevant to minority children, as Kendi would argue (as Kendi says, “the only remedy to racist discriminiation is antiracist discrimination”). The constant division of students by race, and the instillation of a victimhood mentality in minority children and a “you are an oppressor” mentality in whites is, says Pondiscio, not only tribalistic, but damaging to children:

Attempts to create “safe spaces” where students never encounter upsetting words, images, or ideas strike many of us as misguided. Education inevitably includes confronting students with ideas, views, and information that they may find upsetting, but it never includes upsetting them because of who they are or what they look like. No element of ethical classroom practice should allow inflicting intentional harm or emotional distress on students—rich or poor, Black or White—or seek to make a virtue of it. It is immoral and educational malpractice. Neither should we encourage in children a sense of insurmountable oppression, victimhood, or grievance—the very opposite of the uplifting formation of mind and character that education should aspire to. Any pedagogy or curriculum that ascribes traits, motives, or mindsets to one particular race—oppressors versus oppressed; perfectionism, urgency, and individualism as “hallmarks of white supremacy culture,” etc.—cannot call itself “antiracist.” It is racist and unacceptable.

[Paul] Rossi speaks for many of us in the profession who share his concern that what is being done in the name of equity “reinforces the worst impulses we have as human beings: our tendency toward tribalism and sectarianism that a truly liberal education is meant to transcend.”

At the end, Pondiscio asks plaintively, after arguing that high standards and expectations should hold for all students, regardless of race, “Would you feel comfortable with me as your child’s teacher? Yes or no?”

Somehow I suspect that in secondary schools, most parents would say “yes,” but at colleges like Smith, Middlebury, and Haverford, the administration would say “no.”

And I wonder what kind of education Ibram Kendi would give to a mixed classroom of black and white students. If you asked me if I’d feel comfortable with him as anybody’s teacher, I’d have to say no, even though I don’t have children.