I have mixed feelings toward pediatric neurosurgeon, Catholic, and intelligent-design (ID) advocate Michael Egnor. I feel sorry for him because his ID activity is simply a waste of time, much of it spent attacking atheism (mine!) rather than advancing evidence for intelligent design. Where is the evidence for ID that was supposed to convince us all about a decade ago? Egnor’s given up on that endeavor to engage in invective towards evolutionists and atheists, thinking that denigrating scientists will help his cause. It hasn’t. For that’s simply an ad hominem tactic that will convince nobody who hasn’t already drunk the Kool-Aid (or the communion wine). My other feeling is that I deeply dislike the guy because he’s simply nasty. Acceptance of ID has declined since it first surfaces a few decades ago, and teaching it in schools has been ruled a “religious activity” that violates the First Amendment.

You can see evidence of the man’s egnorance and incivility in Egnor’s latest piece at the ID site Mind Matters News (click on screenshot).  Here he argues, as the title says, that evidence for God (which God? he doesn’t say) is scientific: in fact, more scientific than any other proposition. However, Egnor’s “scientific argument” consists of mounting Aquinas’s broken-down old Nag: the First Cause Argument. To summarize, Egnor’s entire argument for God is this: “the existence of stuff proves God.” That’s truly pathetic.  First Cause arguments for God have been made for centuries, but also found unconvincing for centuries.

First, Egnor shows how offended he was by my critique of a Mormon’s claim that “we can have God and vaccines, too, ergo science and religion are compatible”.  According to Egnor, I am benighted on both the scientific and religious front:

Atheist evolutionary biologist Jerry Coyne is a fountain of nonsensical arguments against the existence of God. If a scholar wanted to write a review paper on the most ridiculous arguments against God’s existence so far in the 21st century, he would need look no further than Coyne’s blog. . .

And by my writings I have done “incalculable damage” to the world:

The real scandal is not that these New Atheists don’t believe in God — regrettably, disbelief in God is fairly common in our willfully ignorant and distracted society. The real scandal is that intellectuals like Coyne merely pretend to understand evidence for and against God’s existence. They use their scientific credibility to buttress arguments that are embarrassingly ignorant. They mislead many people who have neither the time nor the inclination to look into these questions deeply and objectively.

Their forays into issues like faith and science in fighting COVID-19 do incalculable damage to so many souls by denying the scientific fact that God exists. God’s existence is far more thoroughly proven using the scientific method than any other theory.

Has somebody not gotten their jab because of me? I seriously doubt it. And look at that last sentence! God’s existence is more thoroughly proven via science than any other theory!

How can I have gone so wrong? Well, first, says the benighted physician, I don’t understand how science works:

. . . as Thomas Aquinas. pointed out in the 13th century, nothing can be proven to exist using deductive proof because deductive proofs only work with logical forms, which are essences. Essence and existence are separate concepts. For example, to prove that wolves, dinosaurs, or unicorns exist, we would need evidence. We can’t prove (or disprove) that they exist by deduction alone.

Yes, but much of science also depends on deductive reasoning, or a combination of the two called “abductive reasoning.” In fact, a lot of modern physics began as deductive processes based almost entirely on rumination. The General Theory of Relativity is such a theory. Of course to verify a theory like that one needs evidence, but that evidence can also come from deductions from a theory. One could predict, for example, that if gravity can bend light, as Einstein posited, then light from a star passing by a big celestial body might curve in its path, giving us a false idea of the star’s real position. This is a deduction, and was verified in 1919 by Dyson and Eddington, who observed the position of stars during a solar eclipse, showing starlight bent, as predicted, by the Sun. Their result has been verified several times over.

But never mind. Had my understanding of the scientific method been so terrible, I never would have had a successful career in science, for my papers would never have been accepted and published.

But my theological misunderstanding, says Egnor, is even lamer: for I can’t grasp that the very existence of stuff around me is evidence for God. That’s what Aquinas’ First Cause argument says: “Everything has a cause; there was a cause for stuff; and all causes eventually regress to the First Uncaused Cause, which is God by definition.” To Egnor, this piece of logic is absolutely convincing:

The Big Bang, to take an example, was not an event in the natural world. It was a singularity, which means that it is undefined and undefinable both mathematically and in conventional physics. Similarly, a cosmological singularity — for example, a black hole — is also a supernatural entity. That just means it is outside of nature. We never observe black holes just as we never can observe the Big Bang. We can only infer — by inductive reasoning — the existence of supernatural entities such as black holes by their effects in the natural world.

This inductive reasoning is precisely what proofs of God’s existence do. We cannot observe God in this life because he is not part of this world. He is supernatural. But we can observe his effects in the natural world just as we inferred the existence of the Big Bang and black holes by observing their effects. It is the same sort of reasoning.

I’ll put the next bit in bold because it’s so stupid:

There is one difference though: the evidence and the logic pointing to God’s existence is overwhelmingly stronger than the evidence and logic supporting any other scientific theory in nature. Aquinas’s First Way proof of God’s existence, for example, has exactly the same structure as any other scientific theory. The empirical evidence is the presence of change in nature. Because infinite regress is logically impossible in an essentially ordered chain of change.

I’m not going to get into the claim that the existence of black holes and the Big Bang are “supernatural” entities.  In fact, we can observe the residua of the Big Bang (leftover microwave radiation pervading the Universe), and there are theories that it is not supernatural: a totally empty universe is physically unstable and the Big Bang is a naturalistic result of that. Further, we can see black holes directly: here’s a picture of one taken with radio waves (and color visualized) just two years ago. The “black hole” or event threshhold is visible in the center. Is it supernatural? Don’t make me laugh. 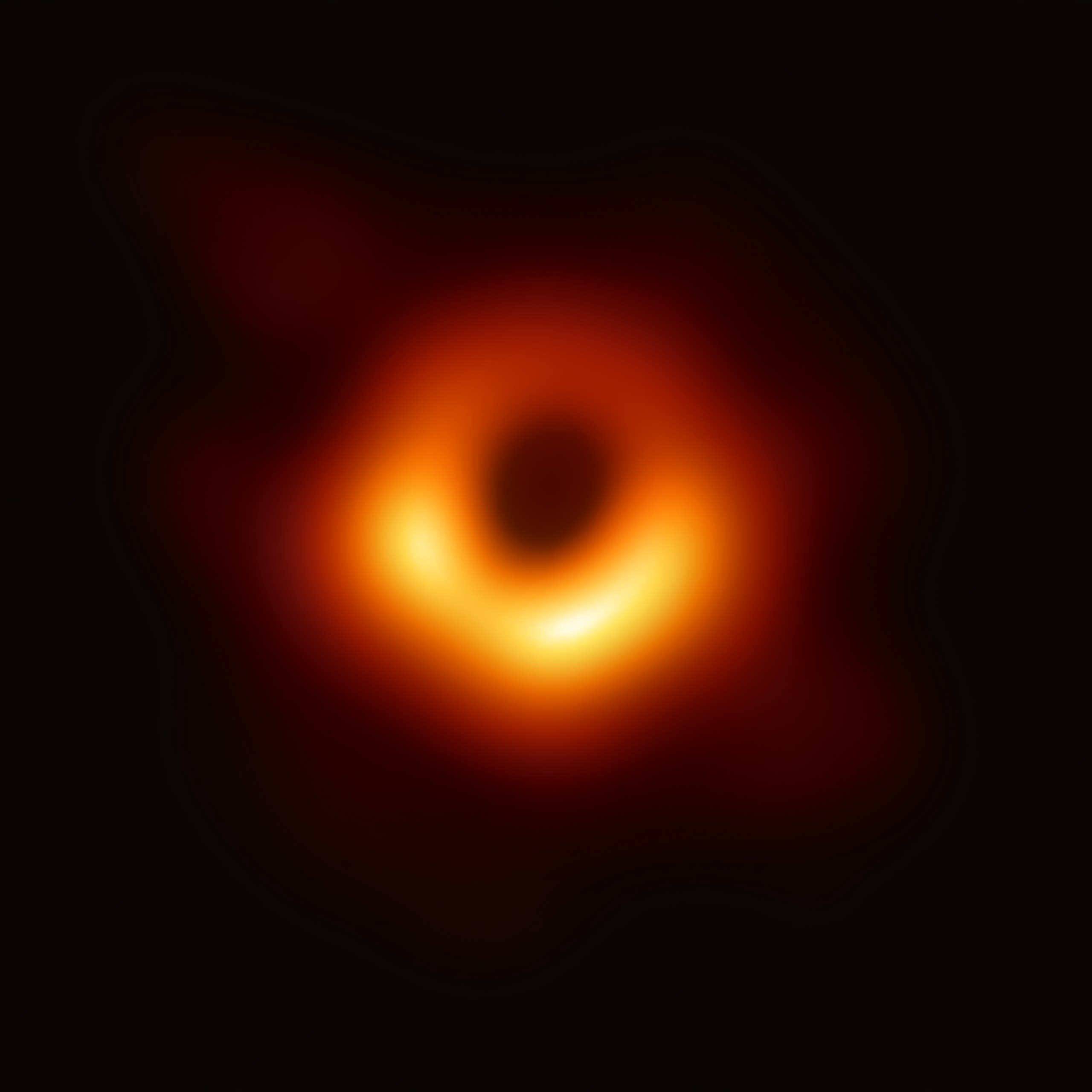 As for the black holes in the First Cause argument (also called the Cosmological Argument), I needn’t reiterate them; just go here or here for a quick overview. One of the objections is that even if there were a First Cause, it wouldn’t have to be a theistic God, i.e., the God who, according to Egnor, continues to interact with the world, even becoming a wafer during Mass.

I’ve wasted enough time on Egnor, for I’m actually giving him what he wants: publicity and attention. While he continues to attack me on the ID websites, I’ll leave the bugger alone except to point out that his own faith—Catholicism—has been and continues to be one of the chief religious vehicles for immorality and harm in the world.

Egnor thinks he has an airtight argument for God (he doesn’t), but he has no argument at all for his Catholic God.  Will he wave the Bible at me to prove that? Then I’ll wave the Quran back at him. What else can you say about a man who thinks that this is a scientific argument:

The evidence and the logic of Aquinas’s First Way is immeasurably stronger than the evidence for any other scientific theory — for Newtonian gravitation, quantum mechanics, relativity, the Big Bang, etc., because every instance of change in nature is evidence in Aquinas’s First Way. Every galaxy that emits light, every wave on the ocean, every leaf that turns brown in the fall, every electron that moves in an atom is evidence for God’s existence.