by Greg Mayer (John Avise’s Sunday bird posts will resume in the near future.)

When I was in high school on Long Island, NY, I spent a lot of time on the Nissequogue River surveying the wildlife. At that time (early 1970s), the Osprey (Pandion haliaetus) was quite rare, and a bit of a “questing beast”. I only ever saw one, and it was later reported that an osprey had been illegally shot and killed shortly after in Ronkonkoma, several miles away from the Nissequogue– perhaps the same bird I saw.

I was thus thrilled to get a close view of one at Captree State Park on Oak Island during a visit in June, 2019. It was on the side of the road on a parkway interchange, and I began snapping pictures out of the window of my car.

Oak Island is one of the barrier beach islands that encloses the Great South Bay on the southern shore of Long Island (Fire Island is the best known of these barrier islands), and Captree State Park encompasses its eastern end. As I watched and snapped photos, the osprey rose up. 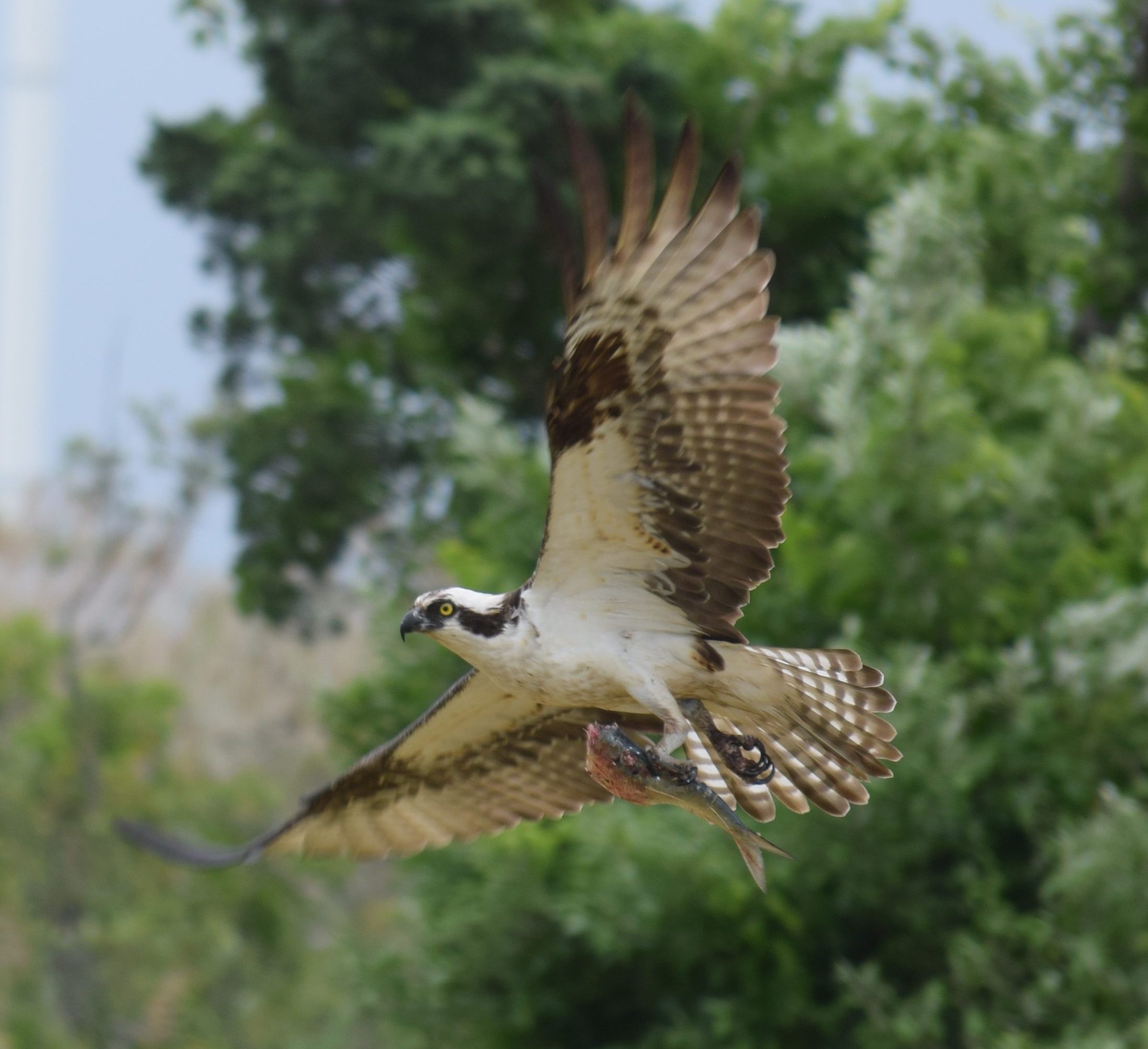 It is carrying a modestly large, headless fish in its left talons. It may have already eaten the head, but it is also possible it snatched the fish away from some fisherman who had begun cleaning it. I continued snapping as it flew away.

The osprey is a conservation success story. Their populations had been more than decimated by eggshell thinning due to pesticides. The NY Department of Environmental Conservation records that

Osprey numbers crashed in the early 1950s to 1970s, when pesticides poisoned the birds and thinned their eggshells. Along the coast between New York City and Boston, for example, about 90 percent of breeding pairs disappeared.

But after DDT was banned in NY in 1971, and with a widespread program of providing nest platforms, osprey populations have recovered nicely: in 1995 there were 230 nesting pairs on Long Island alone. They are no longer considered threatened, live side by side with people, and there are plenty of places to go see them.

A few minutes after taking these photos, I stopped at a Suffolk County park, Richard L. Brooks Memorial Park, also on Oak Island. (The park is named for a Babylon Town Bay Constable who was shot and killed by a drunk driver. In an eerie coincidence I did not know at the time of my visit, the constable had been a New York City policeman, like my father was; the constable’s son went to the same high school I did; and his son attended the US Naval Academy, which is where my daughter went to college. )

There was an active osprey nest on a nesting platform at the Park, erected between the parking lot and the beach. The platform was about the height of a telephone pole (ca. 30 feet). (Indeed, I had to frame and crop the next photos to leave out the telephone wires.)

The bird I saw minutes earlier might have been part of the pair at this nest, although I don’t think it was the same bird as in these later photos. Here’s as close as I could get with my lens. There were people tailgating in the parking lot, and sitting in folding chairs right below the platform–coexistence! Note the wickedly hooked beak– the better to tear up a fish, my dear!

Although the ospreys I saw on Oak Island were my “closest encounter” with the recovered osprey population on Long Island, I had seen some out on Orient Point during a previous trip back to Long Island, again on nest platforms.

These pictures are not Stephen Barnard or John Avise quality, but the second picture above is perhaps my best bird photo ever. (Remember, I’m a herpetologist, and used to looking down, not up!)