A new paper in Nature Communications highlights an ongoing controversy in the evolution of animals: what are the closest relatives of living multicellular animals?

First, though, we need to refresh ourselves on what “animals” are. Merriam-Webster defines them adequately:

Any of a kingdom (Animalia) of living things including many-celled organisms and often many of the single-celled ones(such as protozoans) that typically differ from plants in having cells without cellulose walls, in lacking chlorophyll and the capacity for photosynthesis, in requiring more complex food materials (such as proteins), in being organized to a greater degree of complexity, and in having the capacity for spontaneous movement and rapid motor responses to stimulation.

We’re leaving out the single-celled “animals” here (under “outgroups” in the figure below) and concentrating on multicellular animals.

The multicellular animals include (as the phylogenies show below), Ctenophores, or comb jellies, Porifera (sponges), Placozoans (free living but small multicellular organisms), Cnidaria (corals, jellyfish, sea anemones and their relatives), and Bilateria (everything else; all animals with a head and tail end, as well as a belly and a back at some stage of their life, including echinoderms which have these features as larvae).  Over the years, a combination of developmental, morphological, and molecular analysis has given rise to the two conflicting family trees shown below.

Both trees are the same except for a dispute about the “animal outgroup” (the “breakaway group” or “sister group”), the closest living relative to the vast bulk of the animals, and the first group to branch off from the rest. One school, shown on the left, adheres to the ctenophores, or comb jellies, as this sister group. The other, shown on the right, maintains that sponges occupy this position, and ctenophores branched off later. 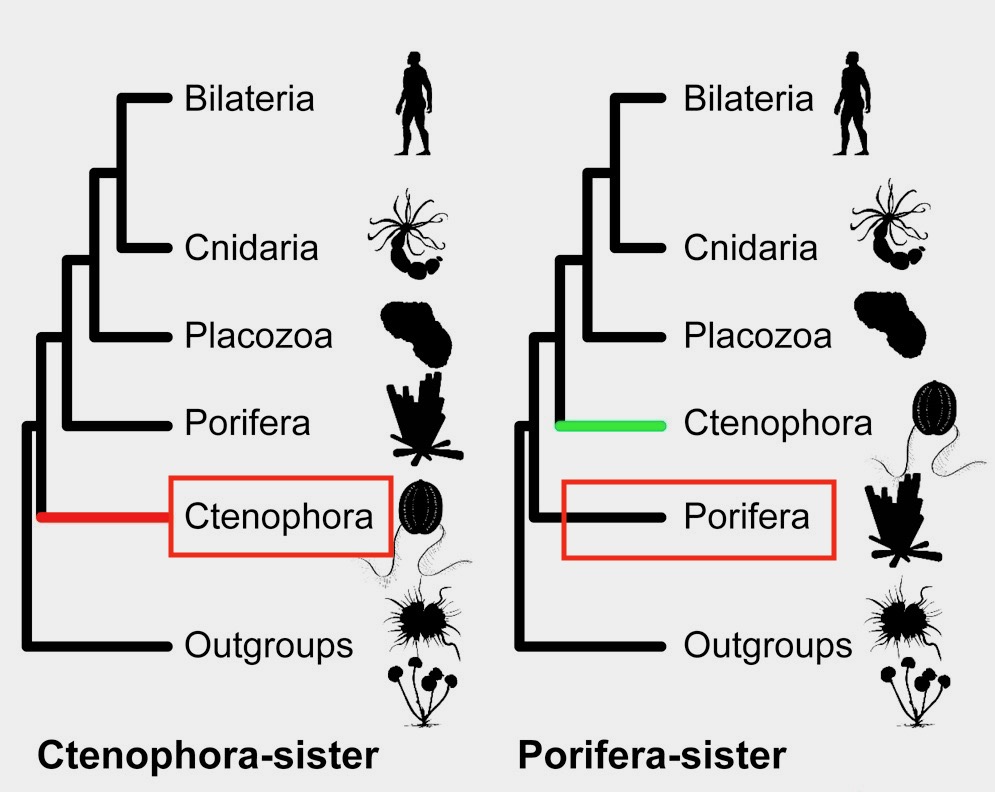 Here’s an example of a ctenophore (photos from Wikipedia): 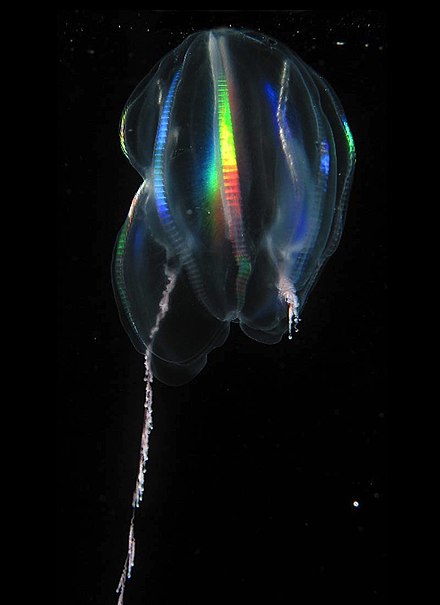 And a bunch of sponges: 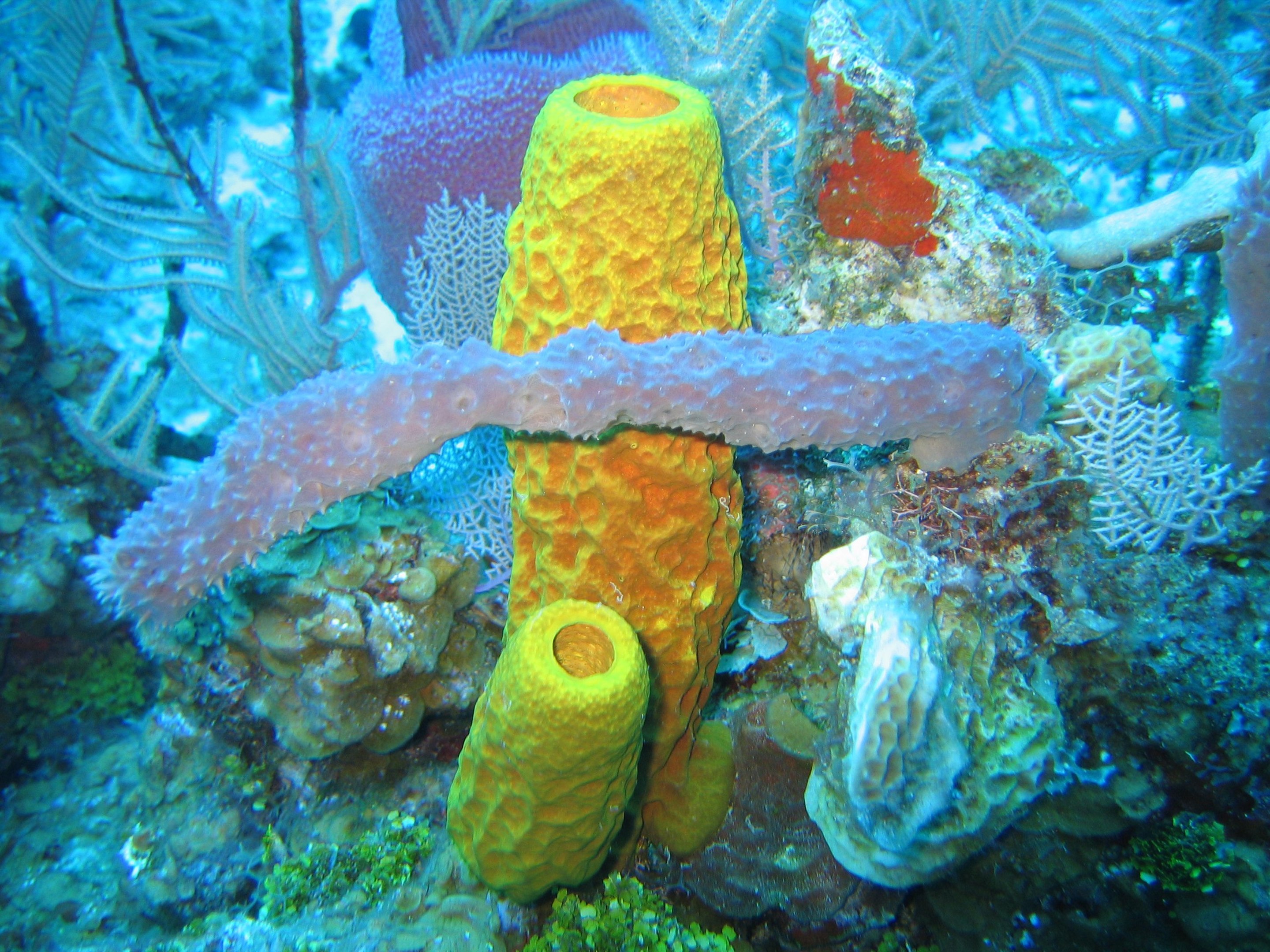 Now the case for sponges as the sister group is based on the observation that ctenophores share unique features with the other animals, including elements of nervous systems, and (except for Placozoans) muscles and a tubelike digestive system (“gut”). But sponges have none of these. Moreover, sponges are made up of collared cells, or choanocytes, which are similar to “choanoflagellates“, singled-celled protozoans thought to be the closest relative to all the animals from sponges on down. This similarity implies that the common ancestor of multicellular animals might have been something spongelike, supporting the second phylogeny above. That implies that sponges changed relatively little after multicellular animals evolved, while everything else changed a lot more.

But some molecular phylogenies have suggested that the more complex ctenophores might be the outgroup instead of sponges.  This is a bit more problematic to both me and Matthew (see his BBC broadcast below), for if sponges are really more closely related to other animals than are ctenophores, why do ctenophores have muscles, nerves, and an in—>out digestive system like most other animals, but sponges lack these things? To hold that ctenophores are the sister group instead of sponges requires that you posit one of two possibilities:

A.) The common ancestor of all animals had nervous systems and muscles and a gut, which persist in all groups but the sponges, and the sponges lost these features. That seems unlikely, but it’s possible.

B.) The common ancestor of all animals lacked these features, but they evolved independently in the choanoflagellates and all other animals save sponges. This seems even more unlikely since it requires the independent evolution of three complex traits in two separate groups (ctenophores and [other animals minus sponges]).

This principle of “parsimony” alone suggests that sponges are the sister group, didn’t lose any of those features, and muscles, nerves, and a gut evolved only once.

The new article in Nature Communications supports the “sponges first” scenario. Click on the screenshot below to read the article, see the pdf here, and find the reference at the bottom of this post. The authors used a new way of making phylogenies using DNA data, dubbed “partition site-heterogeneous models” to eliminate artifacts that may have erroneously shown ctenophores as the sister group of other animals. I’m not going to explain that method and, to be sure, I don’t understand it. In fact, the main results of the paper for the layperson can be described very simply: the new method shows that sponges are the sister group to all animals, a result that makes sense.

I just gave you the punch line, but have to add that the controversy isn’t settled. It is settling, however, as more and more biologists come around to the “sponges split off first” scenario. (I won’t even mention the controversy about the placozoans and ctenophores, and where they fit with relationship to Cnidaria.) Let me just put in the authors’ paragraph where they say that their finding of sponges as the sister group of all other animals is definitive: (my emphasis):

Several studies have already shown that gene family and unpartitioned phylogenomic analyses using more sophisticated substitution models reject Ctenophora sister in favour of Porifera sister. Here, we have consolidated these findings by directly showing that the primary remaining lines of evidence supporting Ctenophora sister, partitioned phylogenomics and measures of underlying support (such as ΔPSlnl values), do not do so when better-fitting site-heterogeneous models are incorporated into the analysis. Thus, the Ctenophora-sister hypothesis can now be wholly rejected in favour of the traditional Porifera-sister scenario of animal evolution, wherein the animal ancestor did not possess key traits such as a nervous system, muscles or a mouth and gut.

Ctenophores as the sister group is now “wholly rejected”! I suspect that not all animal systematists would accept this hypothesis. I do, tentatively, but I don’t fully understand the complex methods of analyzing DNA data (they used 60 animal groups, 406 genes, and 88,384 DNA sites).  My view of these complex methods is the same one that my academic grandfather, Theodosius Dobzhansky, held towards the experts in mathematical population genetics (Dobzhansky was innumerate): “Papa knows best.”

For a fuller explication of the conflict, as well as an overview of animal evolution in general, you can’t do better than Matthew’s 2018 Discovery PROGRAM on the BBC. The controversy about sponges-first versus ctenophores-first starts at 17:45. This program is very good, involves interviews with a lot of different biologists, and should be very clear to the sentient layperson. Plus it’s only half an hour long. Spend this Sunday learning a bit about animal evolution! 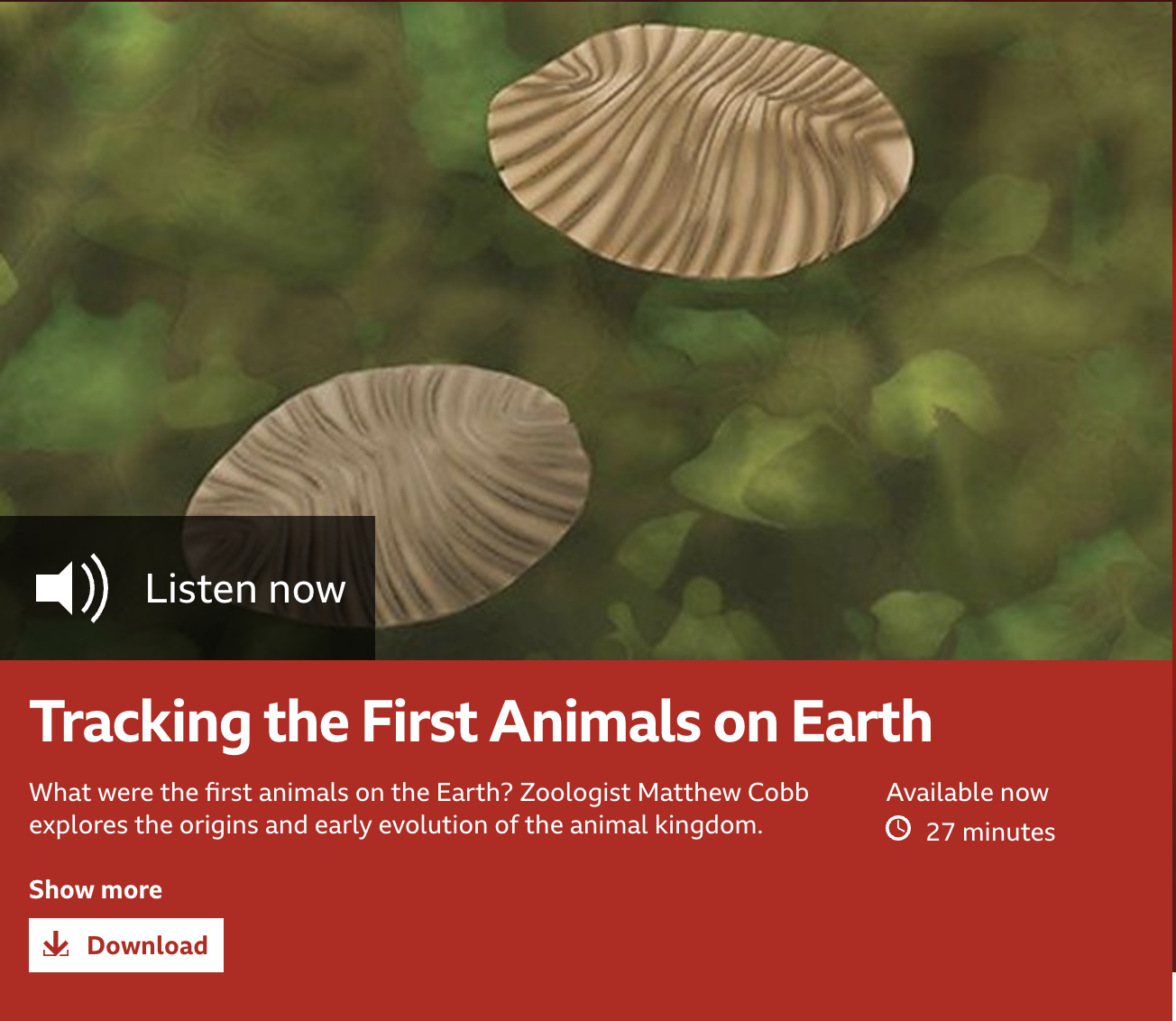 63 thoughts on “Are sponges the closest relatives of the rest of the animals?”