After careful comparison of bill patterns between Honey’s companion this year—a hen we called “Rosie”, or “Rosalind” (after Rosalind Franklin)—and the patterns of Dorothy’s bill last year, the members of Team Duck concur in judging that Rosie is actually Dorothy, and has returned with Honey this season.

You can be the judge (for yourself), but we declare that the two hens here now are Honey (fifth season) and Dorothy (second season).  As you recall, Dorothy and Honey bred within two days of each other last year, and there was a huge kerfuffle in the pond, with Honey eventually absconding with all eight of Dorothy’s ducklings, giving herself a brood of 17 (all fledged). It was sad for Dorothy, and Dorothy used to walk around the pond, disconsolately quacking for her brood.

And then, mirabile dictu, Dorothy RE-NESTED, sitting on her eggs for another month (a total of two months without much food or water), producing a brood of seven babies (one went missing). The six survivors all fledged, and Honey left them alone because of the age difference of the broods. Dorothy’s tenacity and determination endeared her to all of us, even if she was a pretty lousy mom at the beginning, abandoning her babies for an hour at a time. (She improved greatly after that one duckling disappeared.)

So, here are the photos of Dorothy’s bill. There have been more changes in the pattern than have occurred in Honey, but not enough changes, I think, to efface Dorothy’s identity. 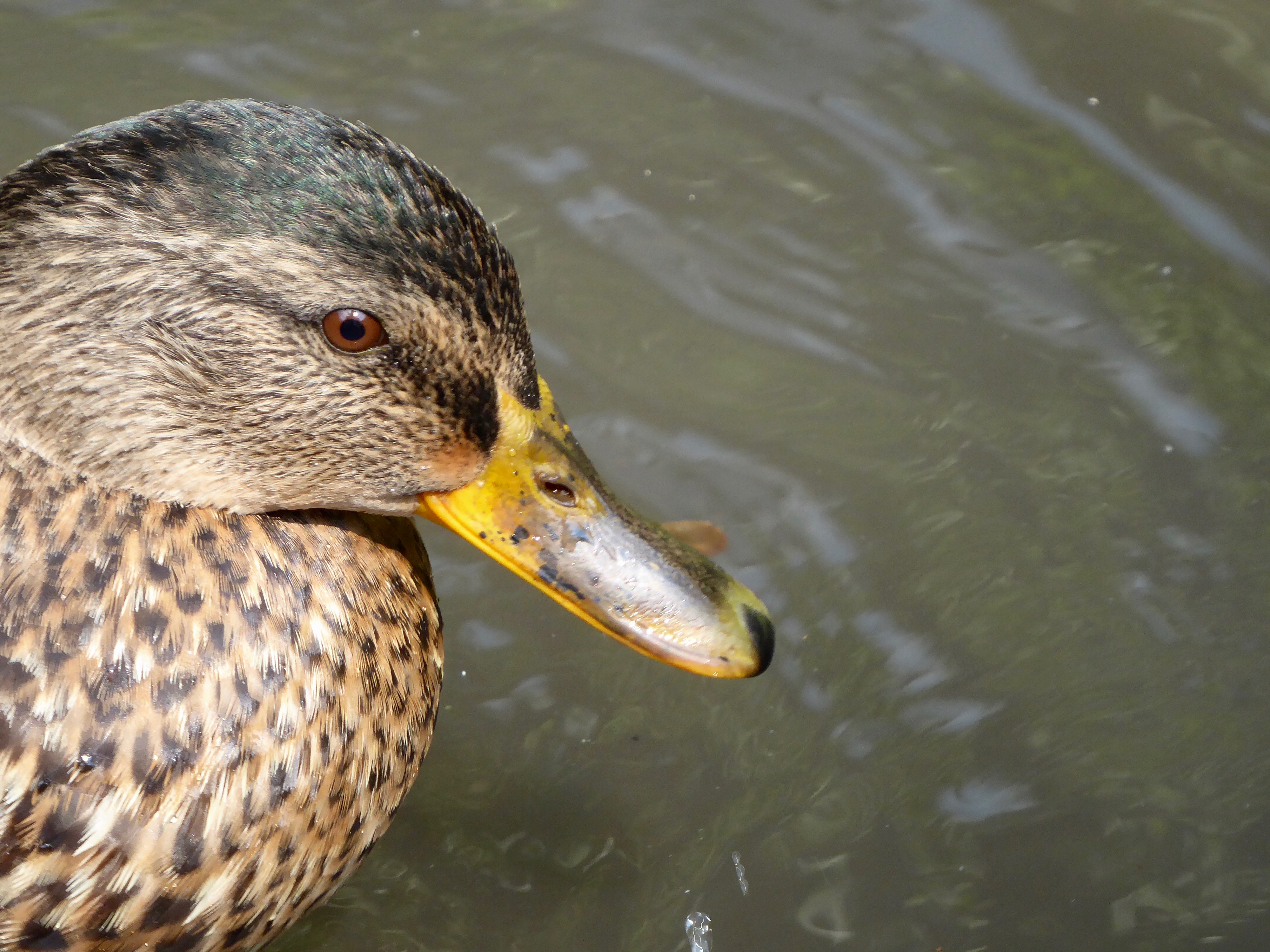 Last year: another shot of the right side. Note the prominent dot directly below the right nostril, a smaller dot at about 7 o’clock to that one, and a faint pair of dots right below the nostril. 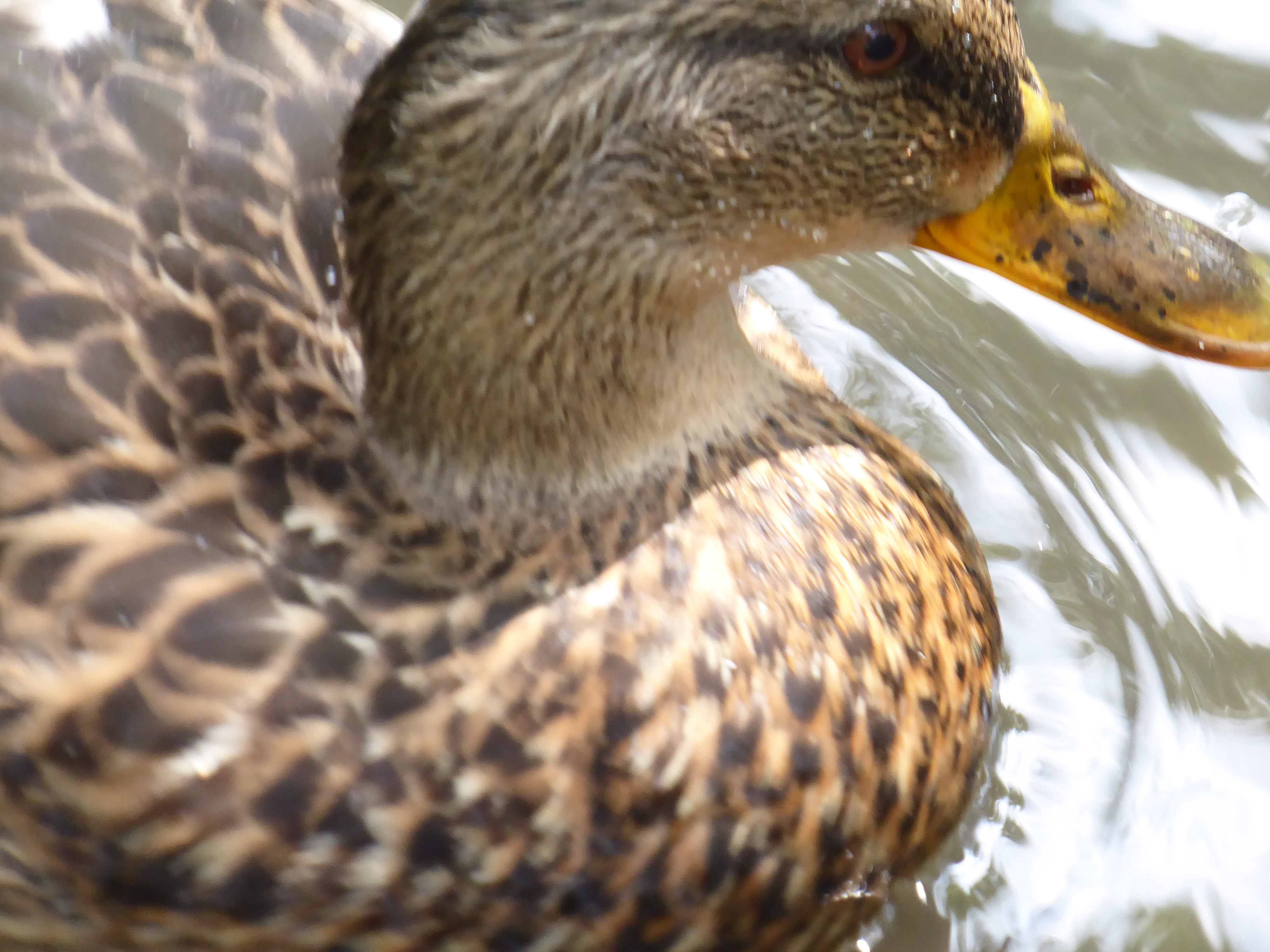 Dorothy, left side of bill, last year: There is a pattern of speckling below the nostril, both fore and aft. 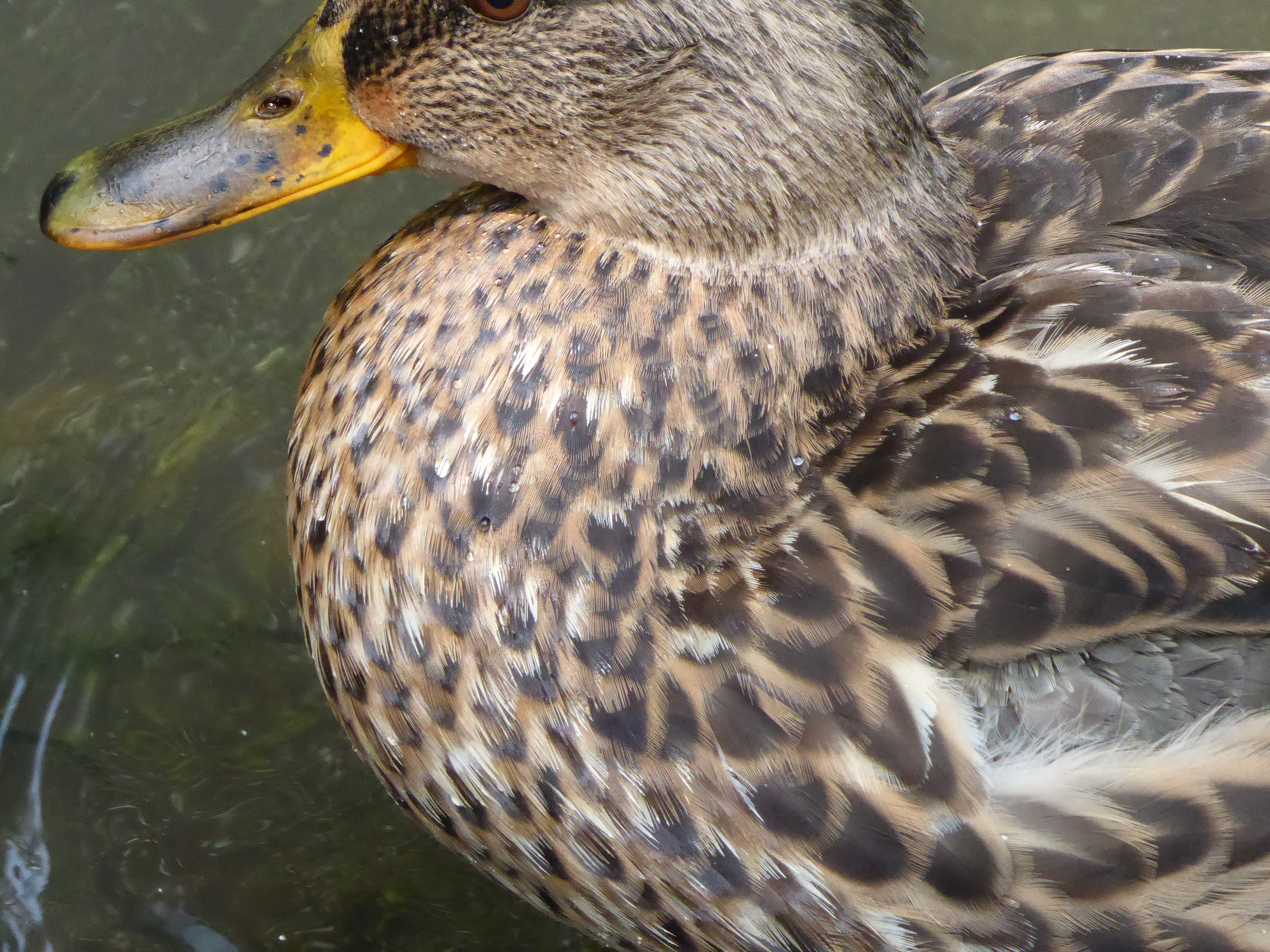 “Rosie”, right side of bill, this year (a few days ago!). The same irregular dot is below her nostril (that’s why she was named “Dot”, or “Dorothy”) as well as the faint dot to its lower left and two faint dots right below the nostril. Note as well the darker patch curving around to the right in front of the dot, which Dorothy had last year. 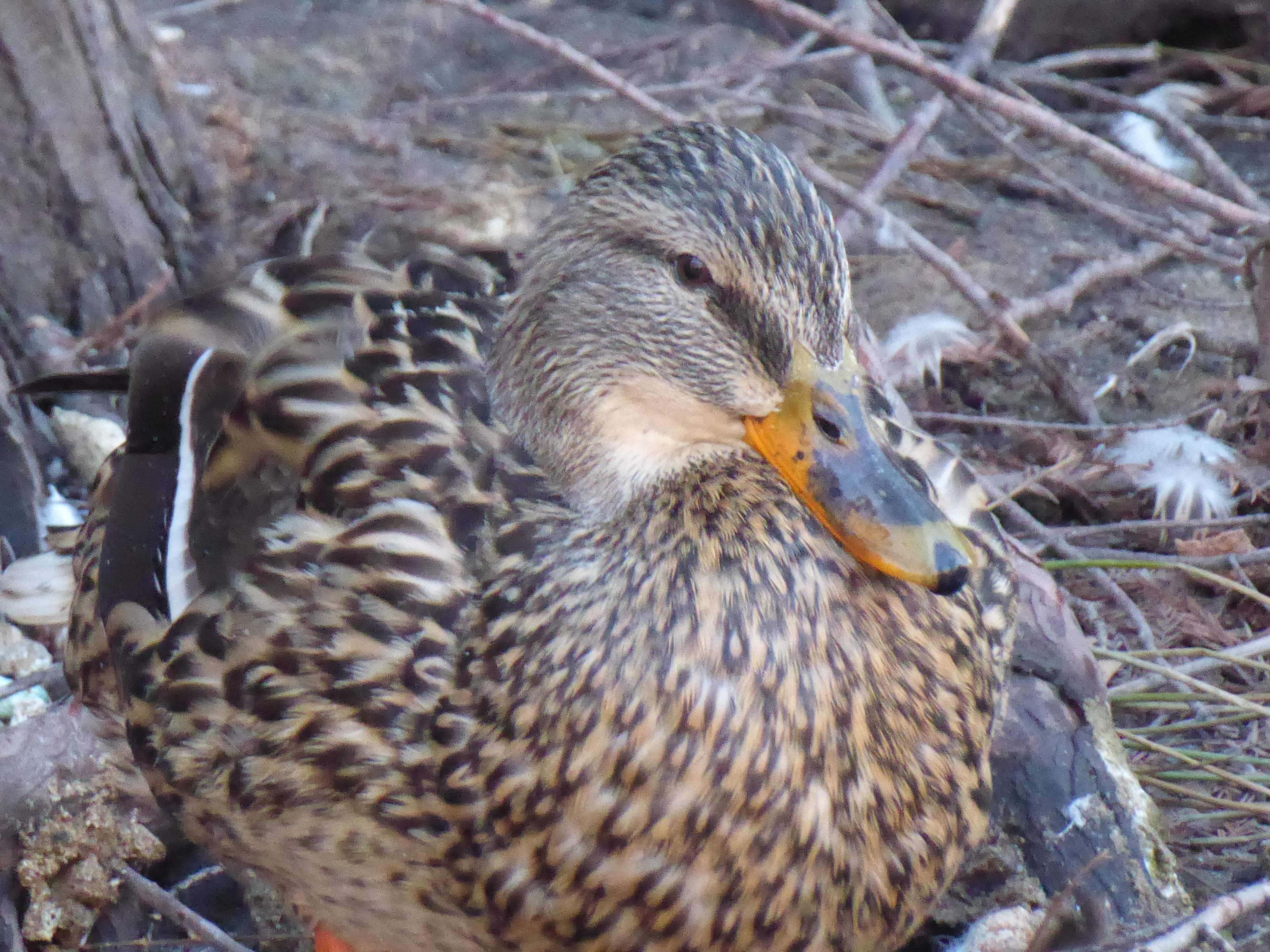 “Rosie,” another shot of right side of her bill this year: 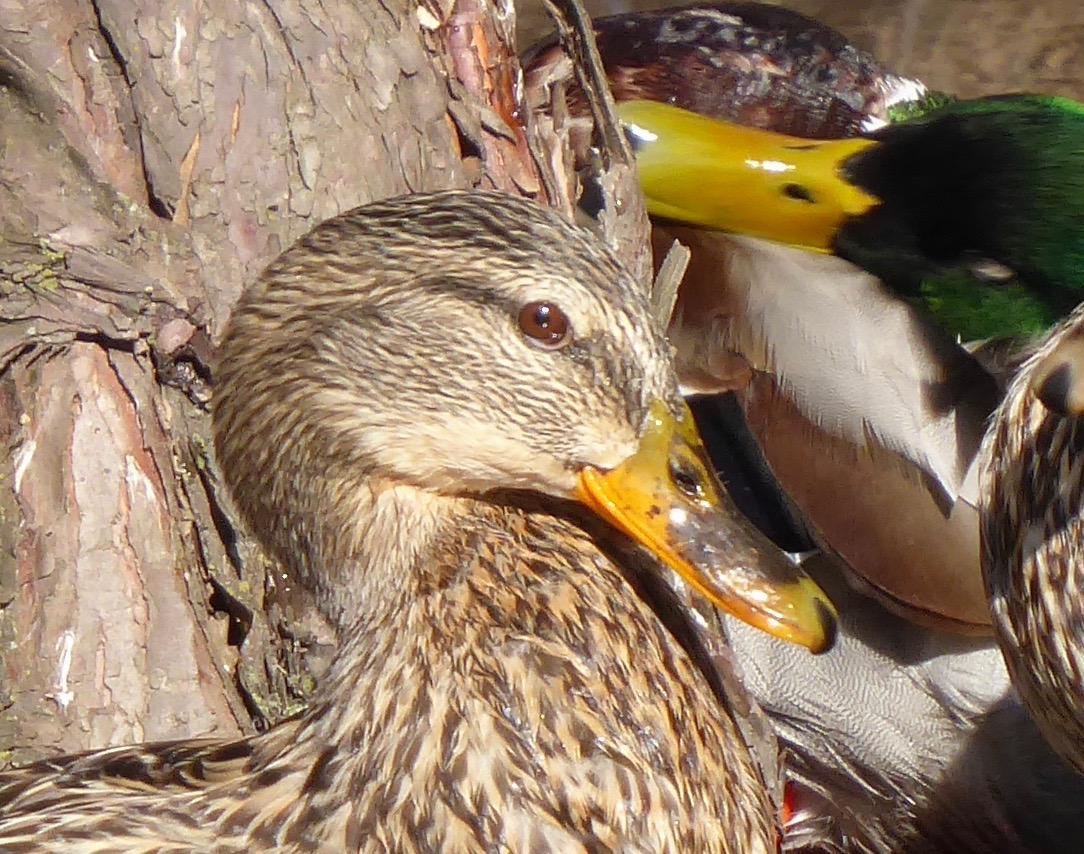 “Rosie,” left side of bill, this year: 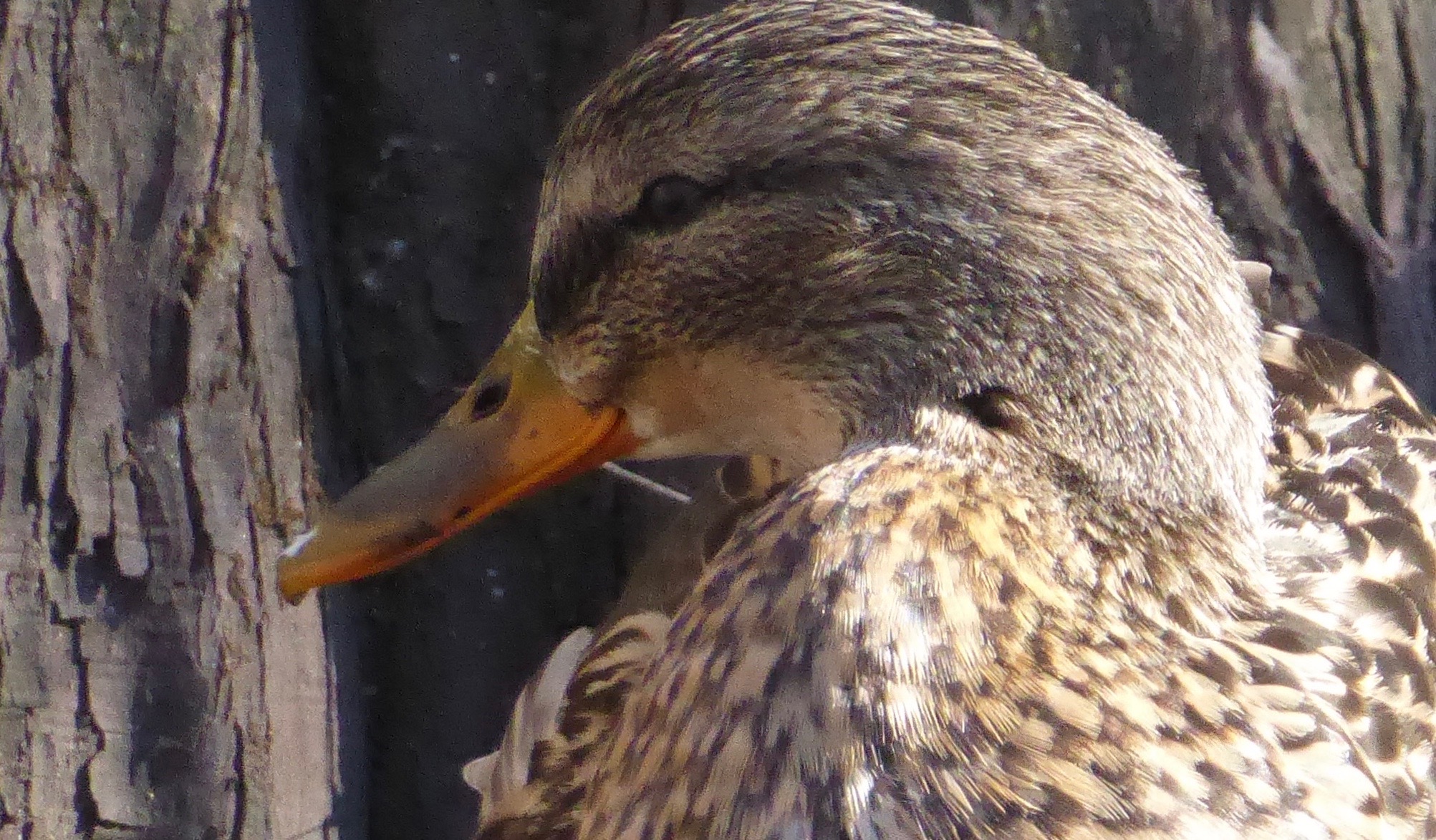 The dots on her bill are more visible here, but note the one below her nostril toward the head, and the one above that (barely visible in picture below but visible above). Those appeared on Dorothy’s bill last year.  The general pattern of dark shading also matches. No other hen comes even close to having a bill like this. 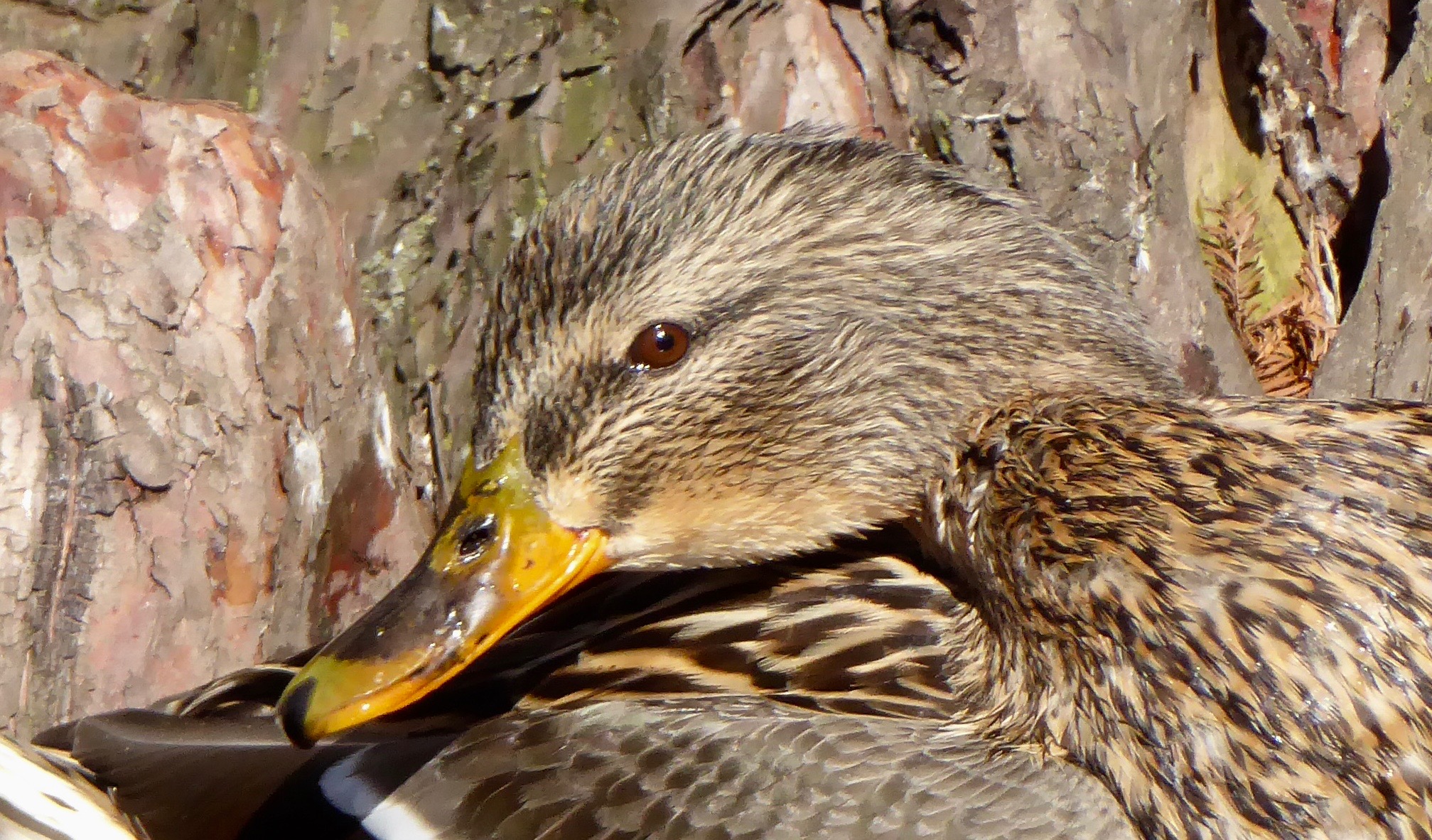 I don’t believe this is wishful thinking; the pattern is similar among years and no other hen has a pattern like this. Ergo, the provisional but strong conclusion is that this is Dorothy.

a). I don’t think Honey and Dorothy left at the same time last fall, though I can’t be sure. But if they did, did they migrate south together, or simply stay in the Chicago area? If the latter, why didn’t either of them visit the pond in the winter when many ducks showed up sporadically (I checked bills when they did)?

b.) If they migrated South together, how did they manage to stay together during both flights and during the winter season?

c.) Will they both breed this year? I’m pretty sure they will, as I’ve seen Shmuley, the drake, mate with both of them. And if that happens, will they produce ducklings at about the same time? And if THAT happens, will Honey kidnap the ducklings again?

There is much to ponder here, but it seems clear that these two hens are bonded, something I didn’t know happened in mallards. They are always together—just as they were always together last year until they separated to breed on different window ledges. After that they were not BFFs any more! Ducklings change everything.

What this also means, of course, is that it will be an interesting duck season, with lots of ducklings in our future.

27 thoughts on “Rosie is Dorothy!”