There are two places on Earth that constitute Vast Unknowns with the potential for finding new species. One, the tropical rain forest, is relatively easy to access, but the area is so vast and difficult of access that there is much to be discovered. And of course the tree canopies, which are rich with life, are not so easy to access.

The other place is the deep sea, particularly around and below the Antarctic continent. A new paper from Frontiers in Marine Science (click on screenshot below, pdf here, full reference at bottom), describes a batch of organisms, some with stalks, clinging to a rock beneath an ice shelf attached to the land.  The interesting part of this study is not only the existence of life deep below ice shelves (that’s been seen before, including observations of fish, worms, anemones and mollusks), but life so far away from the open sea.  What the eight researchers found was a group of stalked and nonstalked sessile organisms, probably sponges, clinging to a small boulder resting on the sea floor. The boulder was 260 km (160 miles) in from the edge of the Ronne Ice Shelf. (A shorter piece in the Guardian is here.)

This means not only are there sessile, filter-feeding organisms living far away from where the food comes from, but, even more striking, the currents that could bring detritus and microorganisms to those sponges are not from the closest open ocean, but from the opposite direction, since that’s where the currents come from. Given these currents, food for the observed species probably comes from between 625 and 1500 km (388-932 miles) away: the nearest open ocean that constitutes the source of photosynthesis that ultimately yields all the food.  The researchers couldn’t collect the species, for they can be observed only through small holes bored with hot water through the thick shelf. Further, the big rock to which the organisms were affixed is 1233 m (4045 feet) below the ice. Given their remoteness, it’s almost certain that these species are new to science.

What’s striking about all this is that the total area explored by many researchers under the vast Antarctic ice shelves, which are so hard to penetrate, is smaller than a tennis court!  Imagine what’s under there! This, however, is the first time that any sessile (immobile) organisms have been found on a substrate below an ice shelf. The remaining organisms involved—and there’s a table of them in the paper—are mobile (i.e., fish) or live on a soft, sea-bottom substrate.

Click to read the paper; I’ve put some videos of what they saw in the tweets below.

Here are the two great Antarctic ice shelves: the Ross and the Ronne (11 o’clock at the top), with the map taken from the paper. The places where the shelves have been penetrated by boring are indicated with dots: filled black dots show sites that yielded observations of organisms, while the sites showing no life have open (white) circles. The one spot below the Ronne shelf that produced the sessile and stalked organisms in this study is marked with a yellow star. 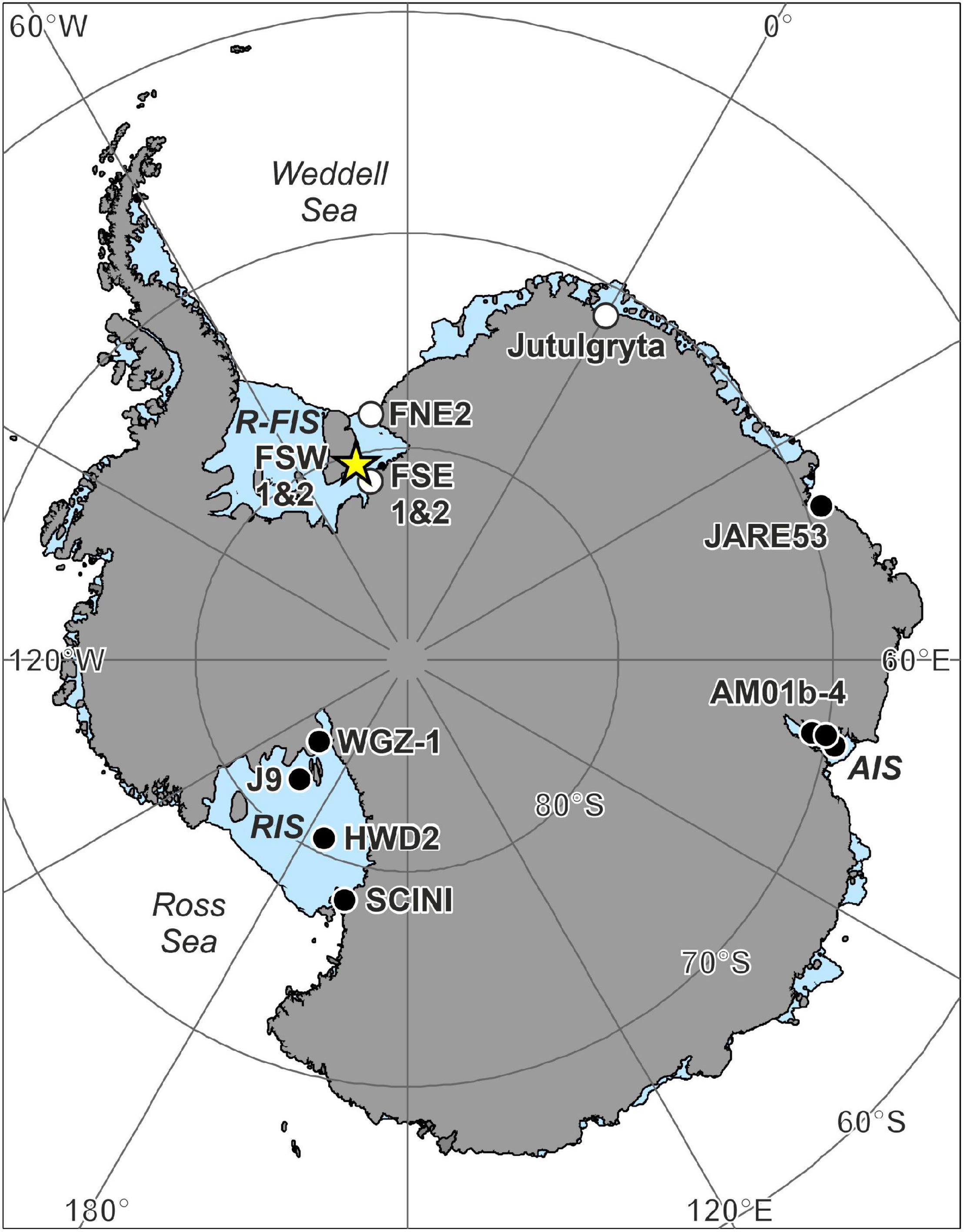 The animals, which are likely to be sponges but could be some other sessile or stalked organisms like ascidians, barnacles, or even worms or cnidarians, were affixed to a “drop boulder” about 1 x 0.75 meters across. How did it get there? The term “drop boulder” is a clue: this was probably a rock from the mountains on the continent itself that found its way into glacial ice, and then moved onto the ice shelf. At some point it fell through the ice and onto the sea floor. It then—only Ceiling Cat knows how—got colonized from another site.

Here’s the figure from the paper showing the boulder and its affixed organisms. They’re not very clear, and they’ve had to outline and highlight the organisms. I’ve added the caption from the paper

Here are two videos, the first showing one of the scientists involved in the study explaining the find and its significance. The second video shows the organisms:  the blobs on stocks are particularly clear. You can see the difficulties of trying to manipulate a probe and a light in the darkness through a borehole more than 4,000 feet above. But yes, those aren’t artifacts: they’re alive!

Discovery of life after drilling through 900m of Filchner-Ronne Ice Shelf in #Antarctica.

Another map shows the holes drilled in the immediate area and the direction of the sub-shelf currents in the vicinity. The hole that yielded the view of the boulder is FSW2.  The black and purple arrows (see caption) indicate the direction of water flow, i.e., where the food comes from. As you see, the currents don’t flow from the nearest edge of the ice shelf but from a far greater distance, so the food particles have taken a circuitous route.

The upshot: This is only a preliminary observation, and we don’t even know what those bloody creatures hanging onto the boulder are. But even observing them is a hard job: you have to get yourself onto the ice shelf with all your gear (perhaps they flew in), and then use a hot-water boring system to get through the thick shelf ice and then go down nearly a mile. To find out what these species are, they’d have to collect them, and that would involve either devising a boring/collecting device, or getting some kind of submersible below the shelf, most likely from above, which itself is nearly impossible. Going in below the shelf from the sea is theoretically possible, but it’s a big distance!

At any rate, what we know is that there are certainly many unknown species beneath the shelf, and maybe even unknown phyla. And once again we get the lesson that life is extremely tough and tenacious, here living in total darkness in near-freezing waters about a mile down, in an area where food is pretty damn scarce.

21 thoughts on “Life found deep beneath an Antarctic ice shelf”