Today’s contribution comes from Rik Gern from Austin, Texas. His captions are indented, and you can click on the photos to enlarge them.

Here are a few more submissions for your Readers’ Wildlife Photos. All of these were taken just outside my back door and represent everyday wildlife from central Texas.

The first image gives the initial appearance of copulating crustaceans but has nothing to do with crustaceans or copulation; it is a picture of two cicada exoskeletons (family Cicadidae, I couldn’t find a proper Latin binomial). I suspect this was not a simultaneous molting, but rather that the second cicada emerged after the first and followed the same path up the tree before stopping to molt at the same spot as the first. It makes for an spooky looking image though! 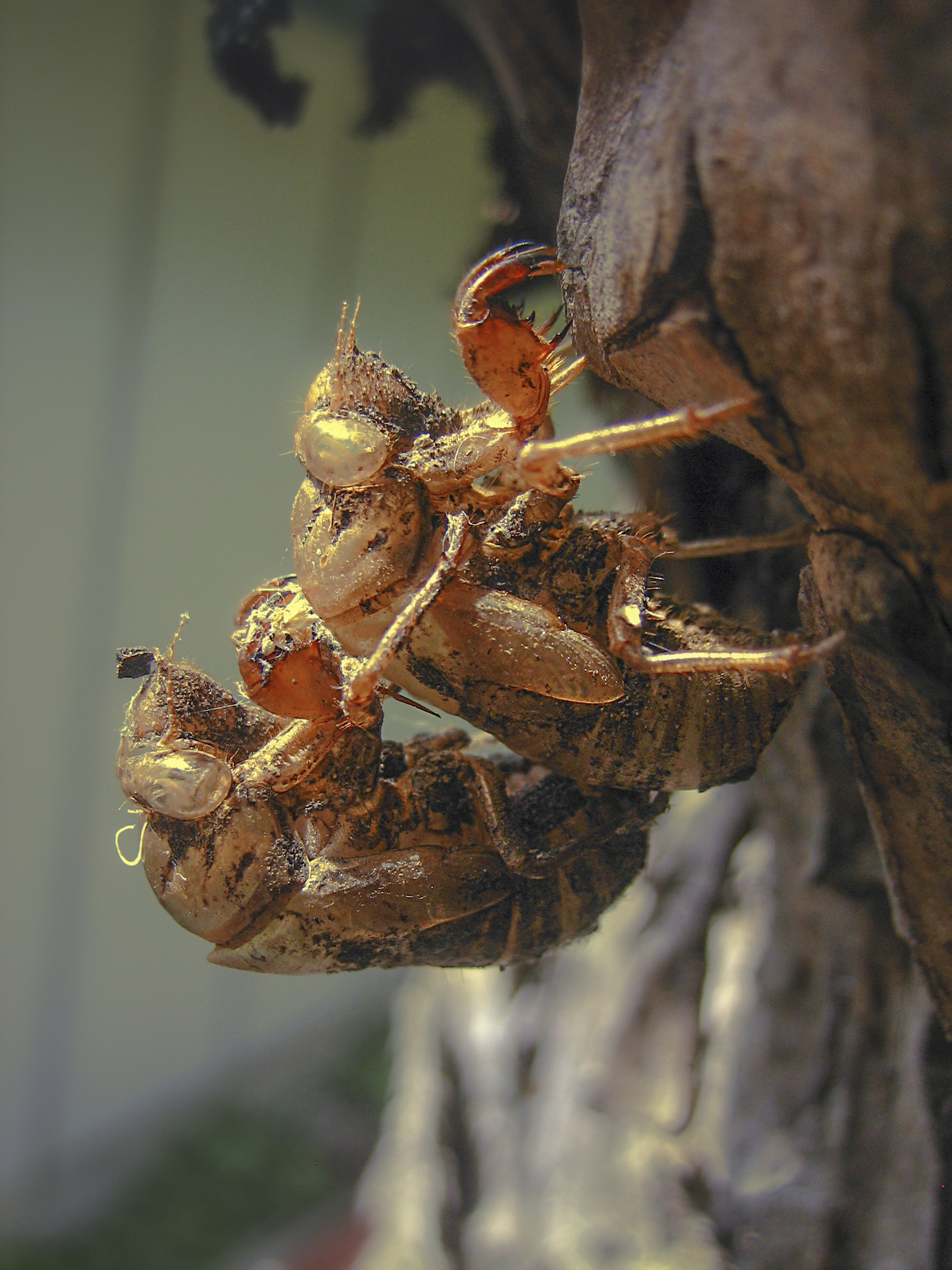 The bandy legged insect with the pretty wings is a Cranefly (order Diptera, family Tipulidae, Genus Toxorhynchites, I couldn’t find a proper Latin binomial), often mistakenly thought of as a killer of mosquitoes. Adult Craneflies don’t kill anything, in fact, they don’t even eat! They just hatch, mate, lay eggs and die. The first picture is shot from above while it was resting on a plant and from that angle you wouldn’t know it has wings, but the second shot shows a wing that looks every bit as delicate as the skinny legs. 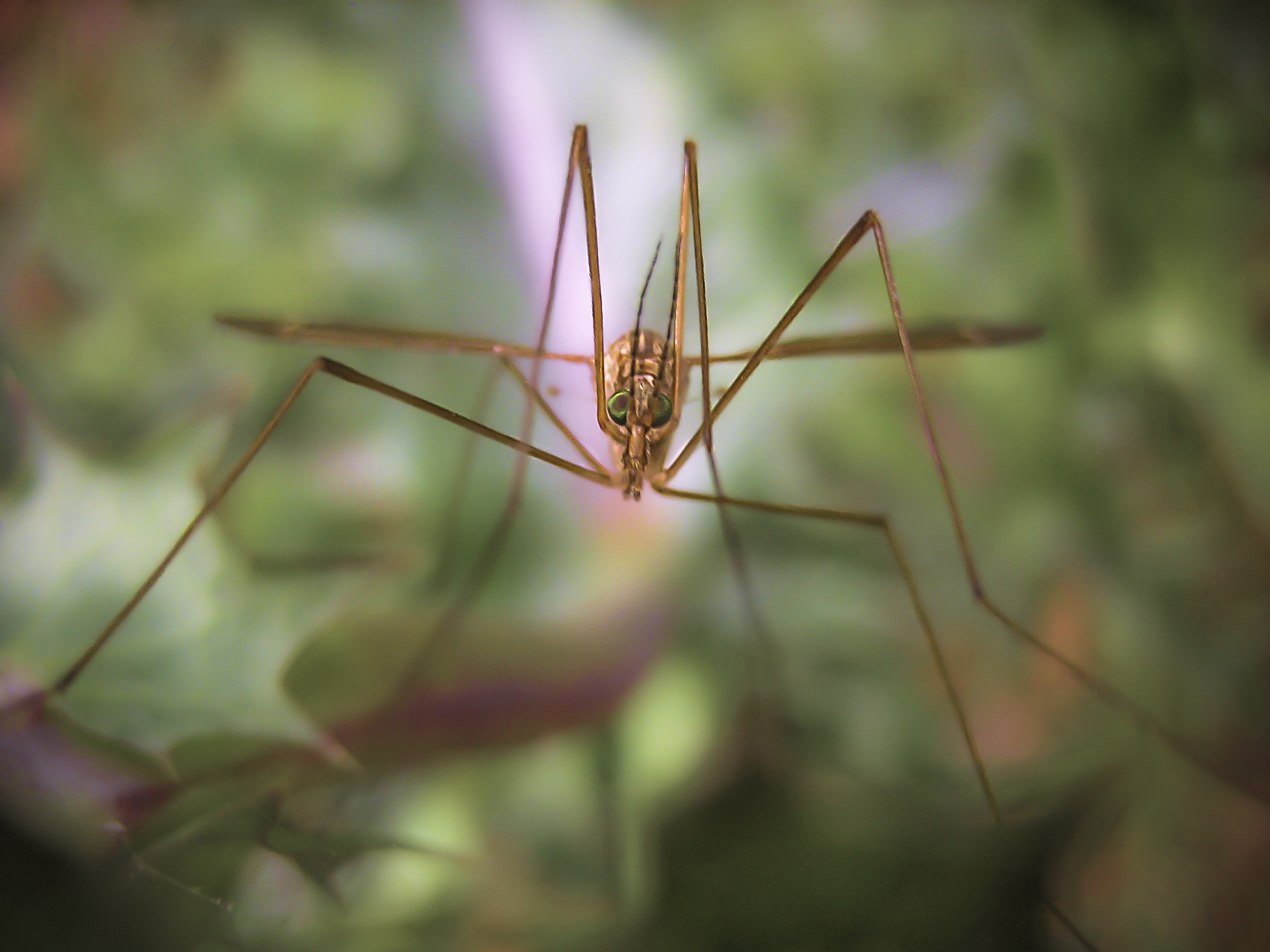 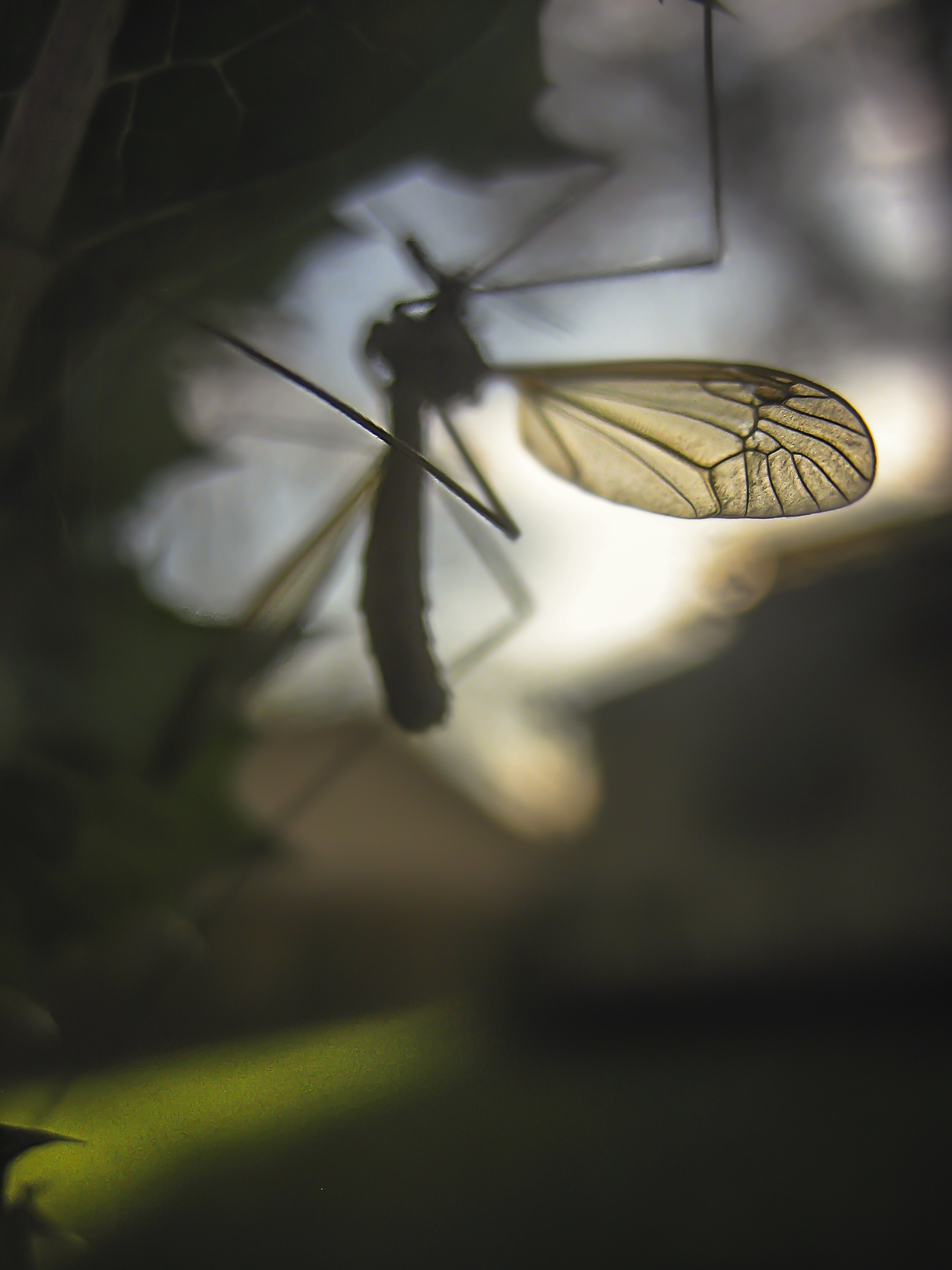 Next we have two different moths. I first spotted the Polyphemus Moth (Antheraea polyphemus) from my kitchen window. There were a number of large dead leaves on the lawn and without my glasses I thought it was just another leaf, but was puzzled by the fact that it seemed to be the only leaf blowing in the wind. When I put on my specs and got closer I realized it was a moth! The face looks like something out of a sci-fi movie and the wing pattern makes me think of a grumpy pumpkin! 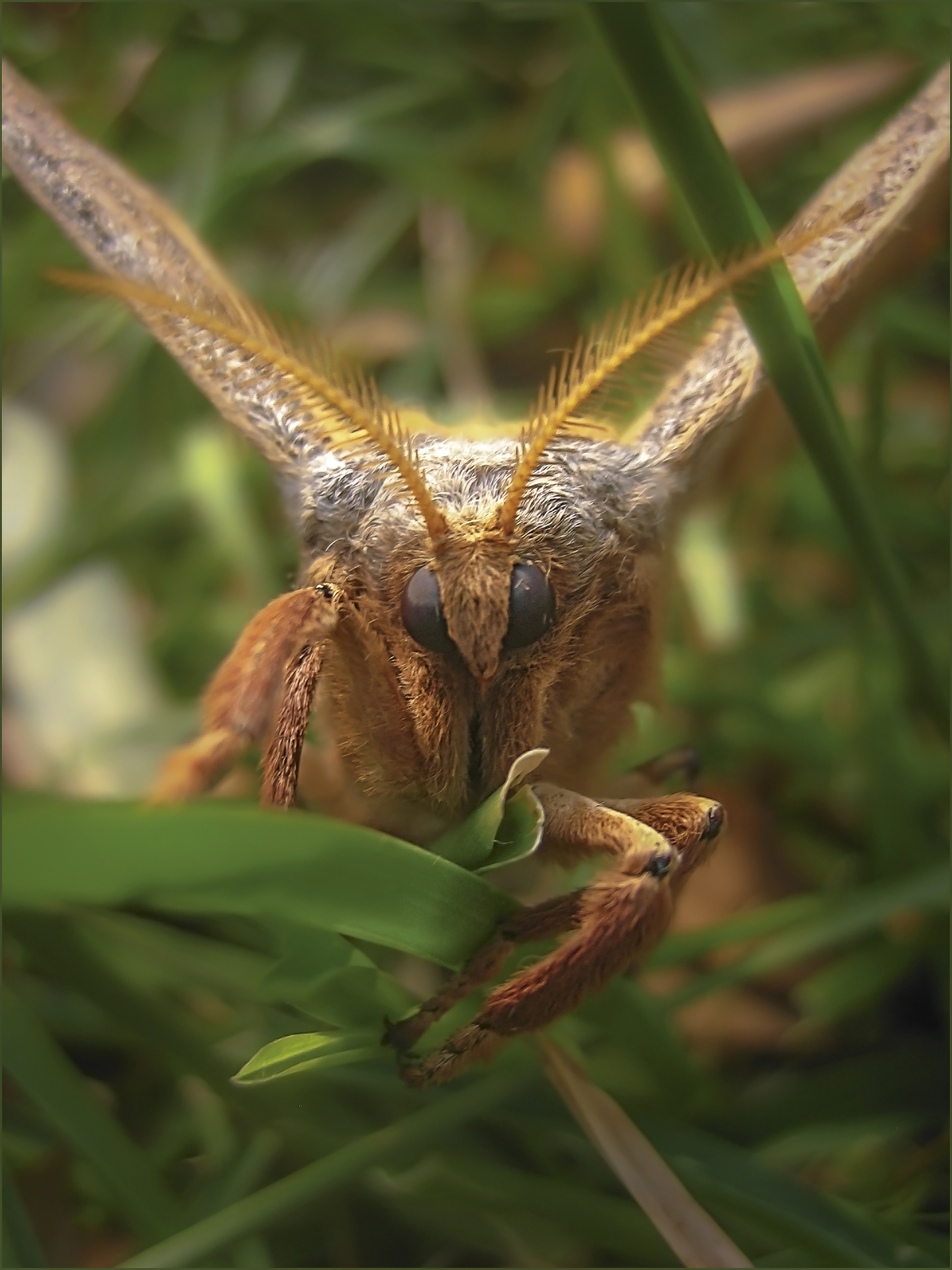 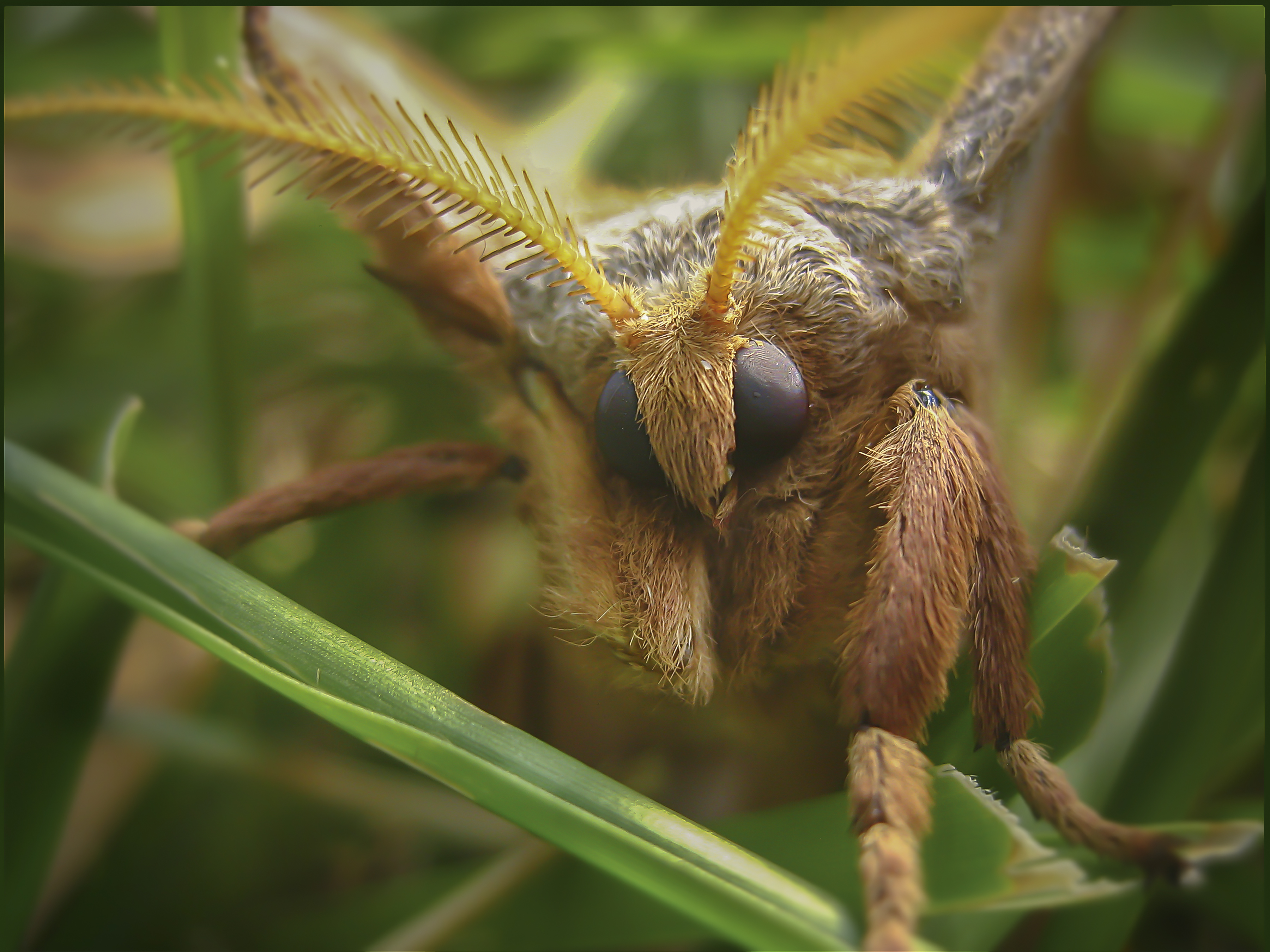 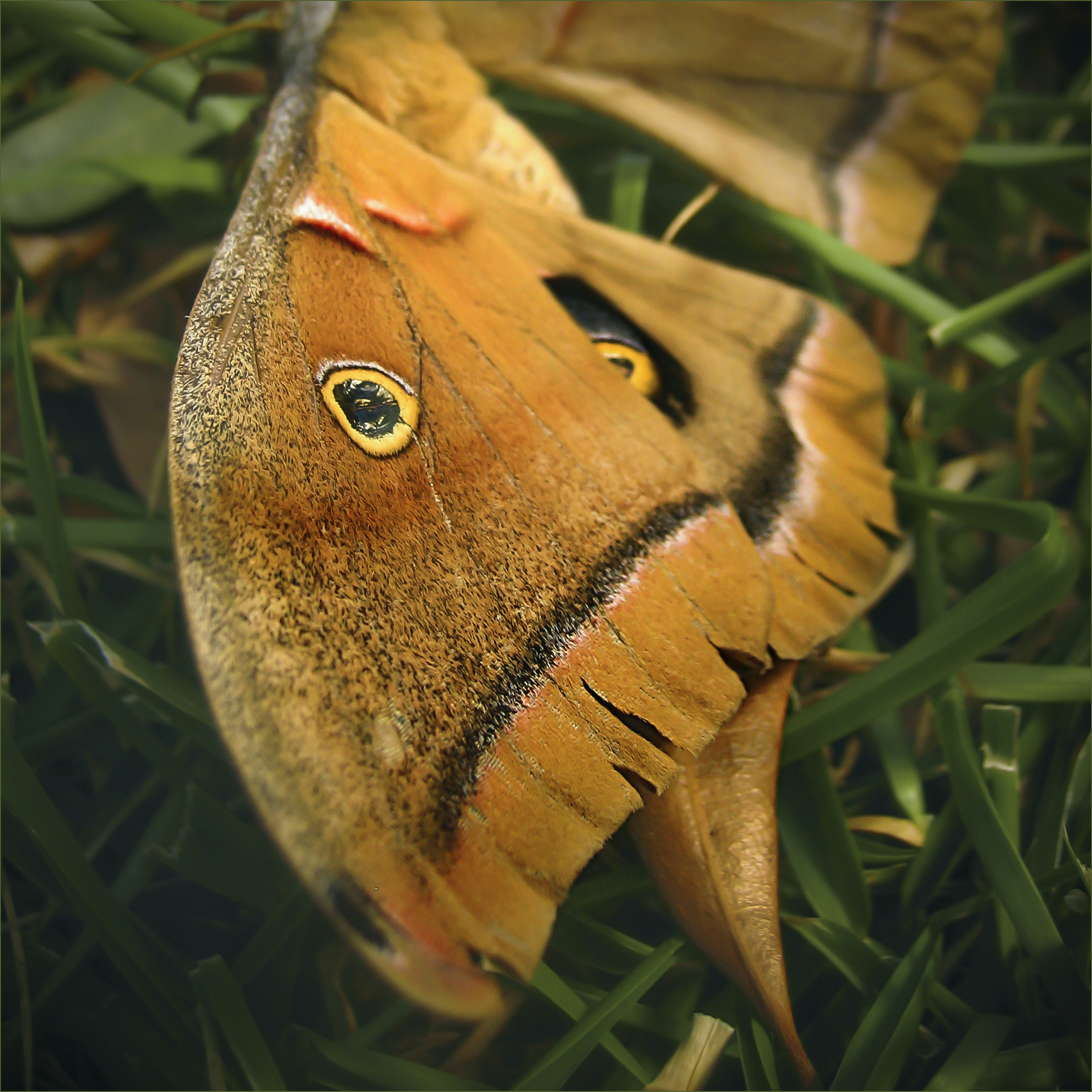 The second moth is a Banded Sphinx moth (Eumorpha fasciatus). It appeared on the same tree as the cicada exoskeletons, about two feet below them and two years later. As with the cranefly, the first shot is from above as it rests vertically on the tree trunk. The moth stayed still for quite a while as I got close and took pictures, but before it took off it started beating its wings furiously until they made a sort of humming sound. I don’t know if that was a warning to me for pestering it, or if that was a way of disbursing or ridding itself of some material, but it was an impressive display! 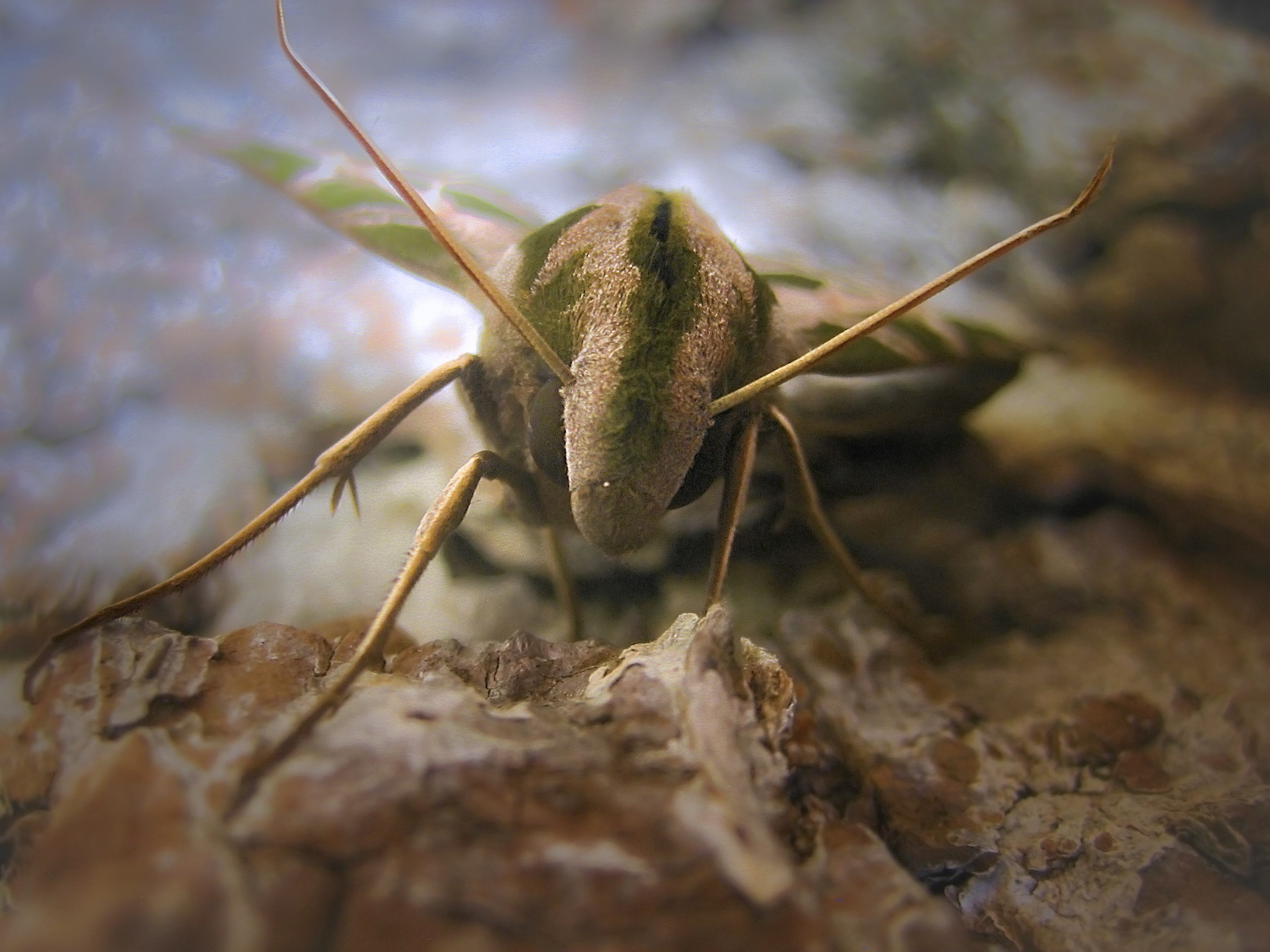 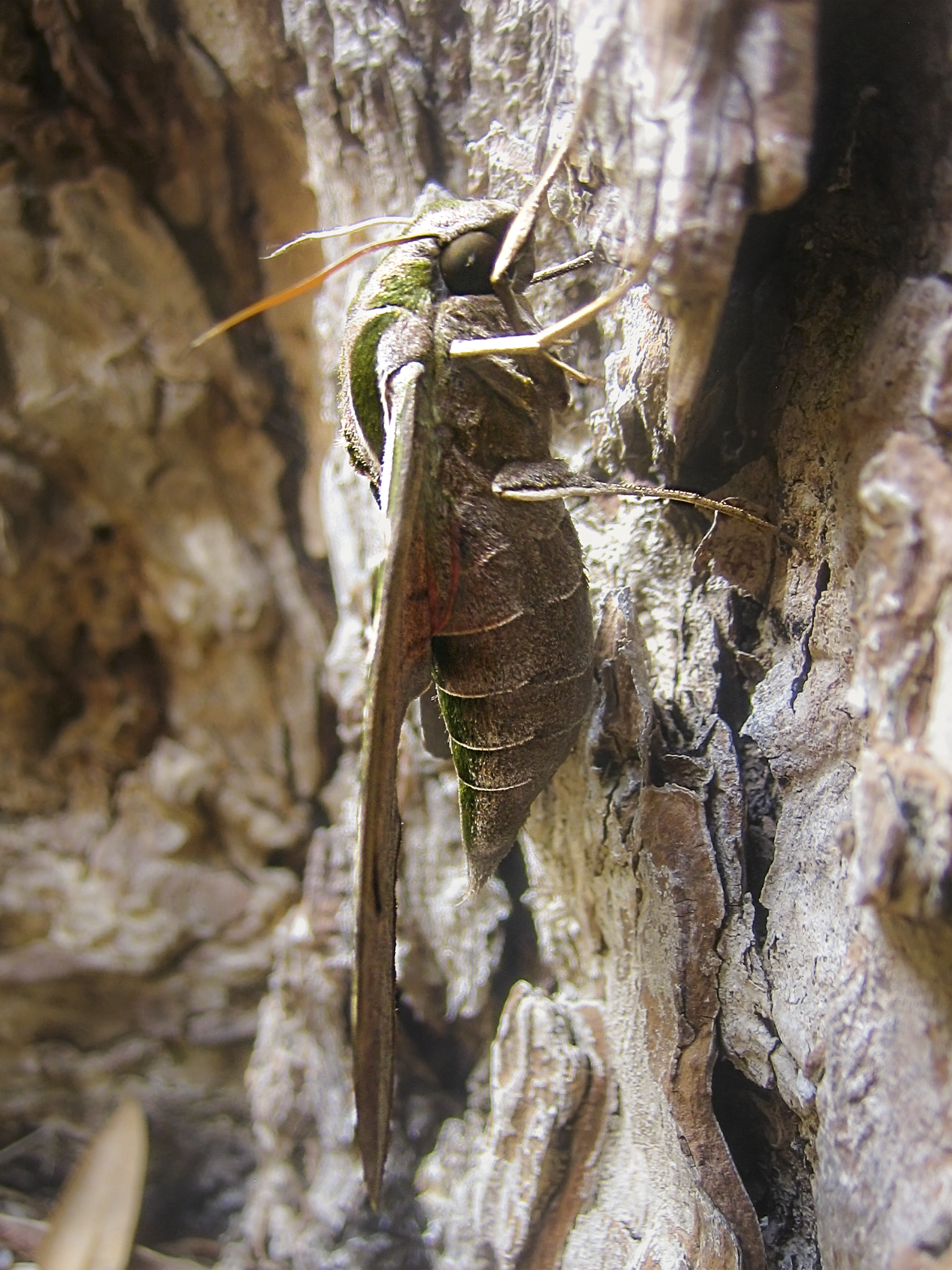 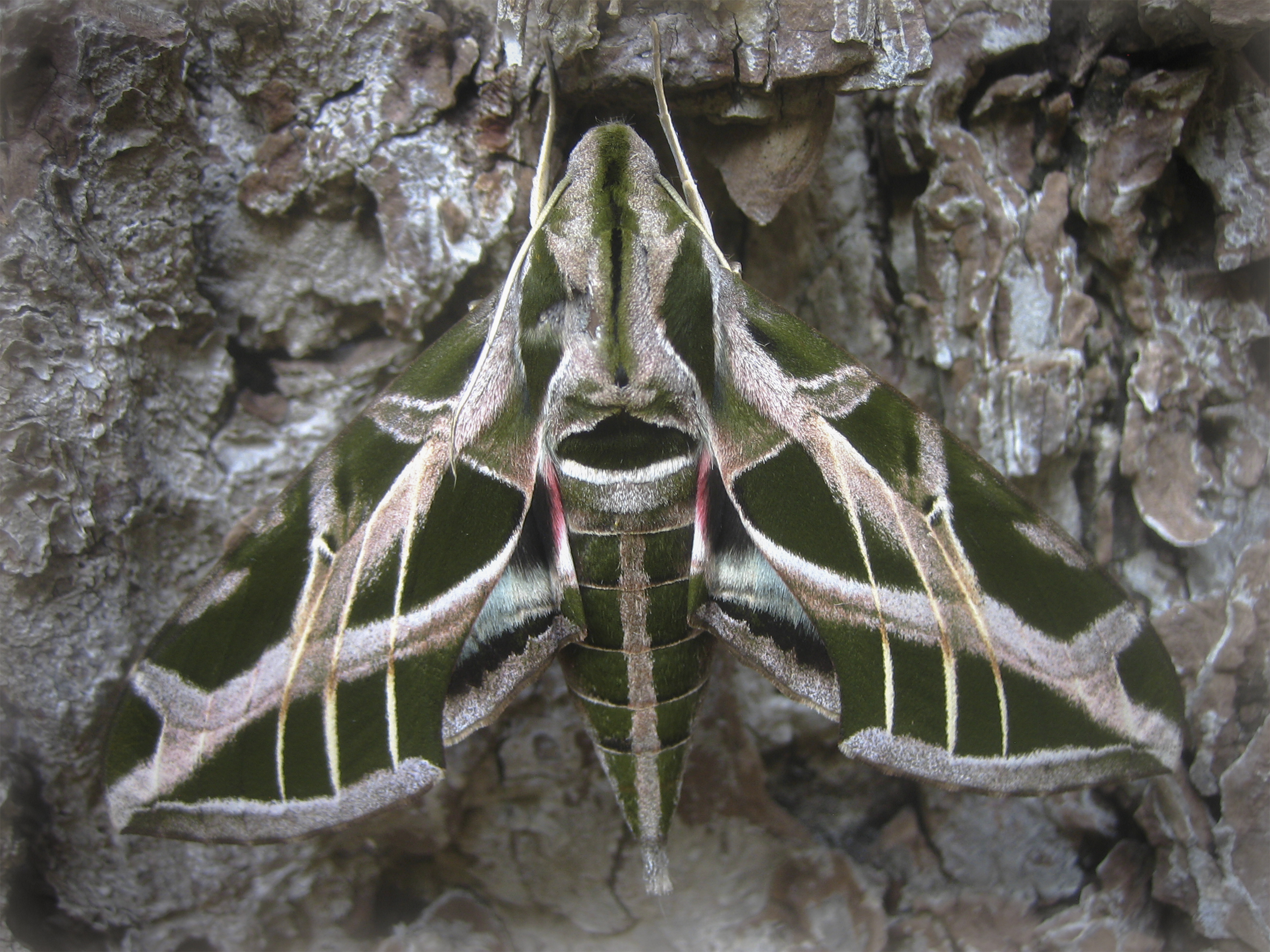 The final image is sort of a digital funhouse mirror hallucinogenic version of “spot the moth”. It’s a distorted mashup of the Banded Sphinx moth and a Red Pine tree (Pinus resinosa) that I sent you for a previous posting. I call it “Endless Forms Most Ludicrous:  Moth DNA and the Tree of Life”. 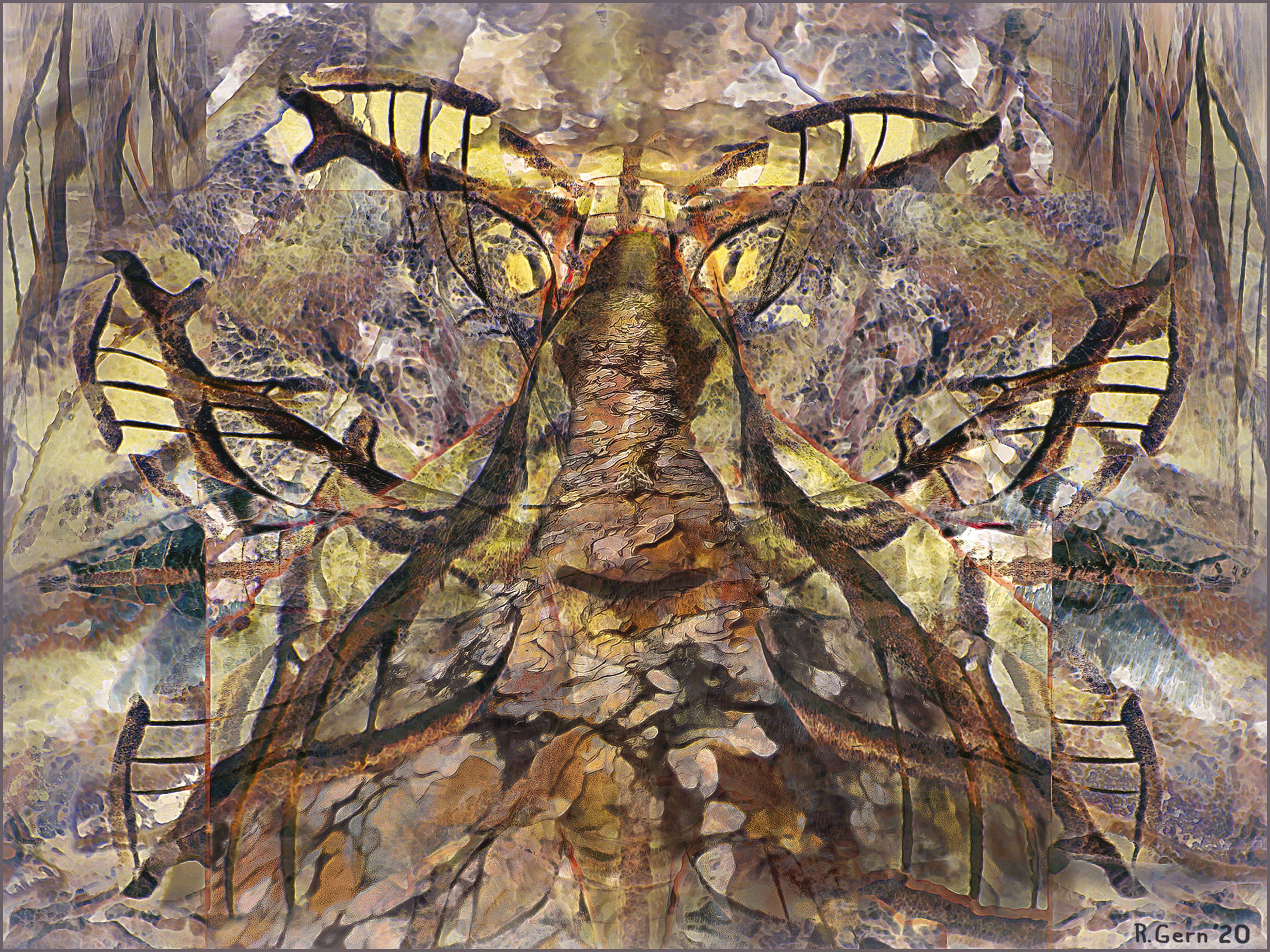 JAC: The photos for the mashup: 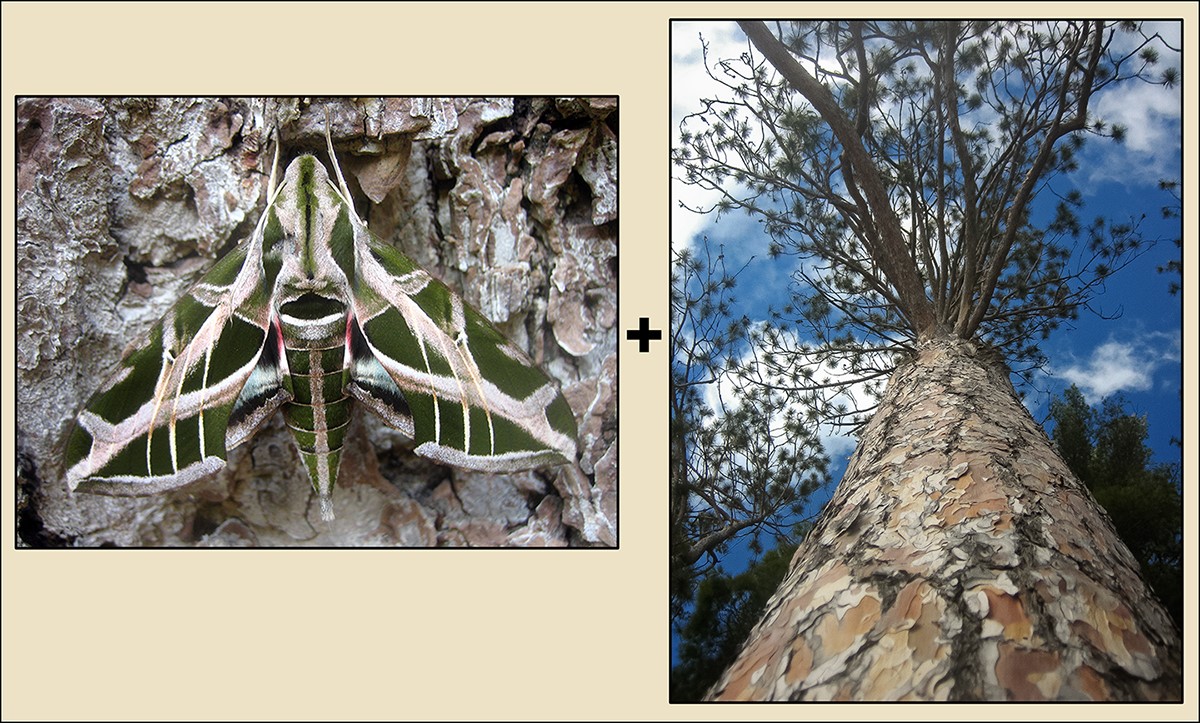