I am still in need of readers’ photos, so think of me if you have some.

Today we have some lovely bird pictures from Doug Hayes of Richmond, Virginia. This is another episode in his popular “Breakfast Crew” series, in which he shows pictures of birds at his feeders. Doug’s IDs and captions are indented; click on the photos to enlarge them.

Part 12 of the Breakfast Crew!  We have had snow twice so far this winter here in Richmond, Virginia. It has been colder and more rainy than usual. The bad weather hasn’t slowed down the Breakfast Crew though, and has even drawn some new birds to the yard.

A group of house finches (Haemorhous mexicanus) at the feeder. 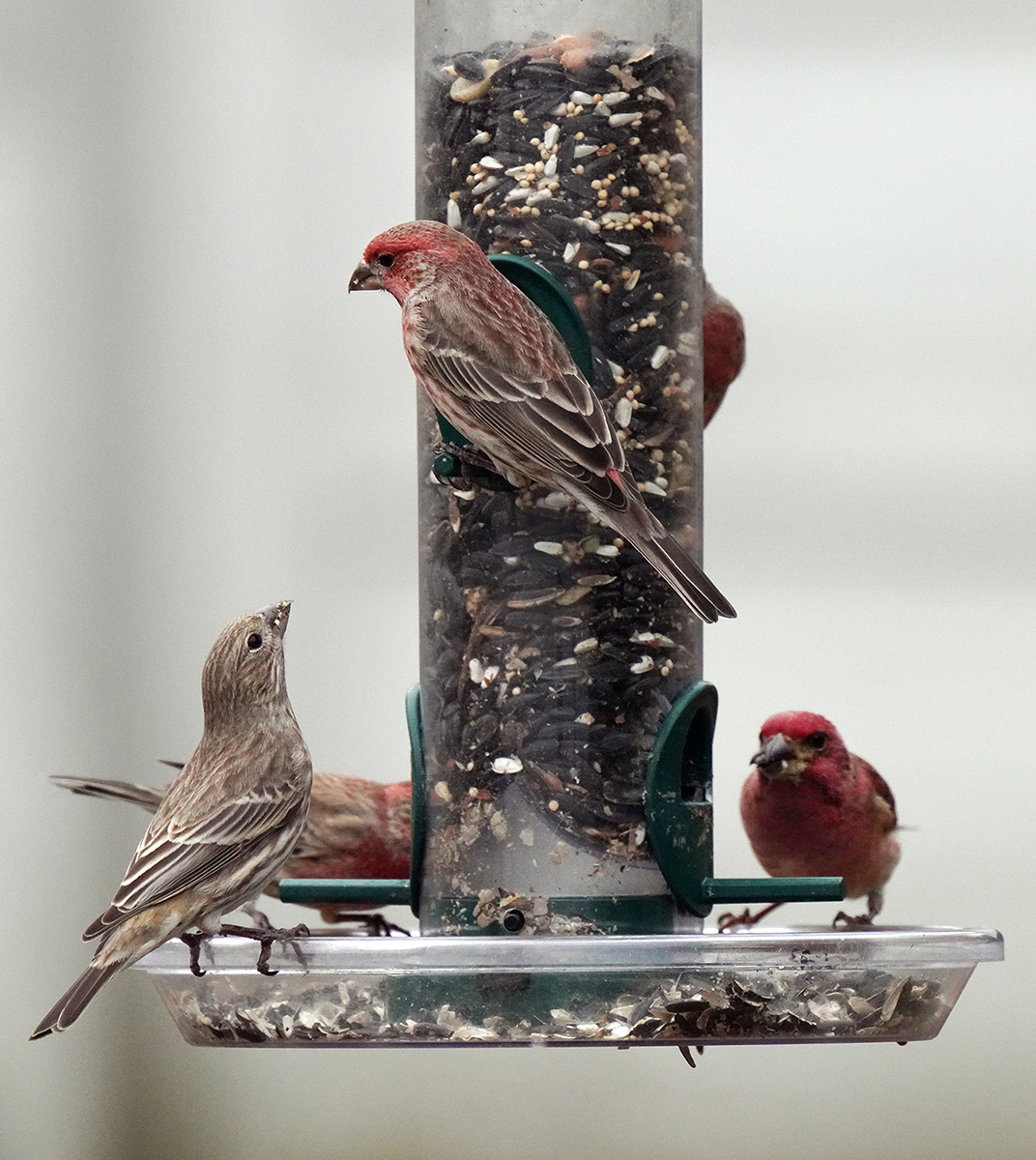 A male northern cardinal (Cardinalis cardinalis) at the feeder. Since I put the seed catchers on the feeders, the cardinals have been eating from them instead of just scavenging seeds from the ground. 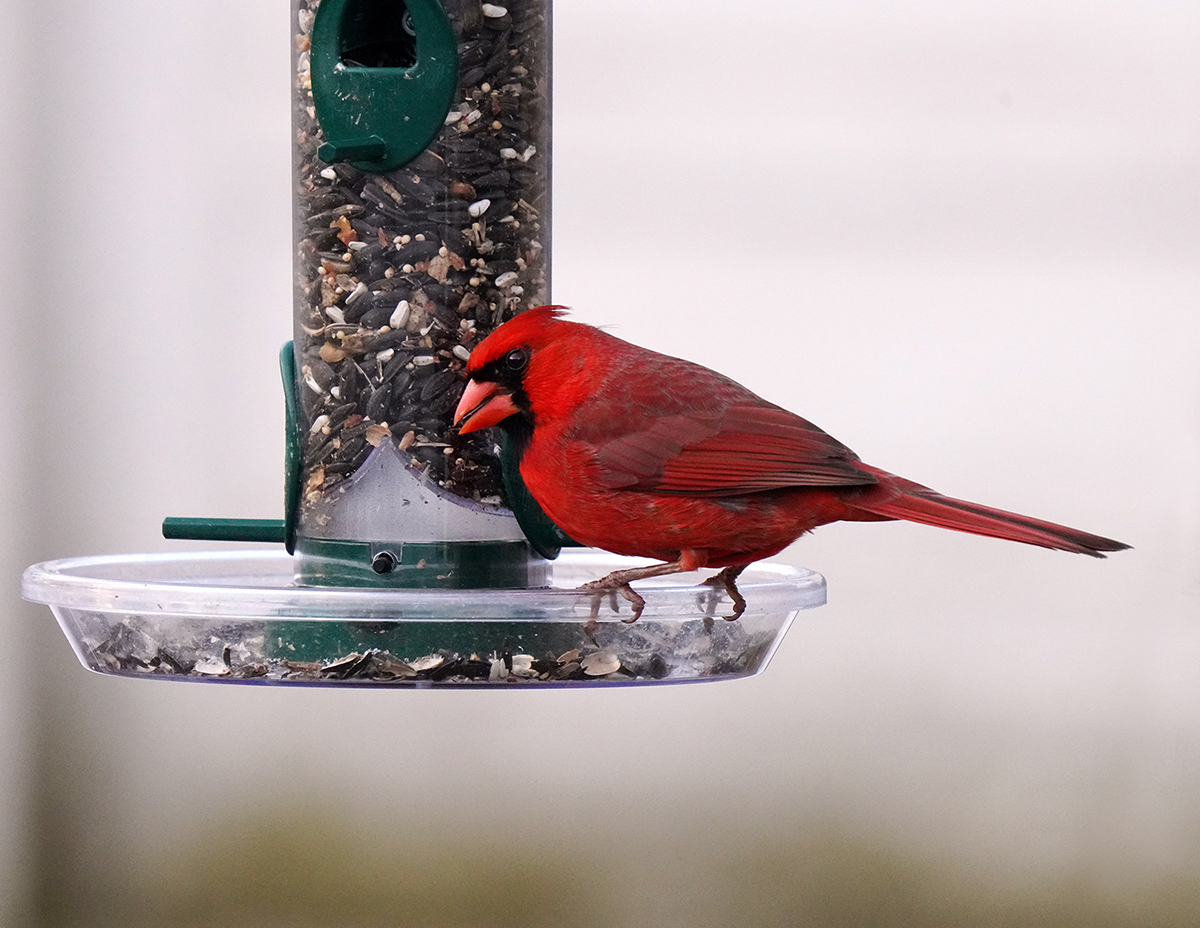 This female red-bellied woodpecker (Melanerpes carolinus) is one of the regulars. Instead of eating suet like the other red-bellied and downy woodpeckers, she goes to the seed feeders and pokes around until she finds a peanut, then flies off with it. She will make several trips to the feeders each morning, snagging a peanut each time. 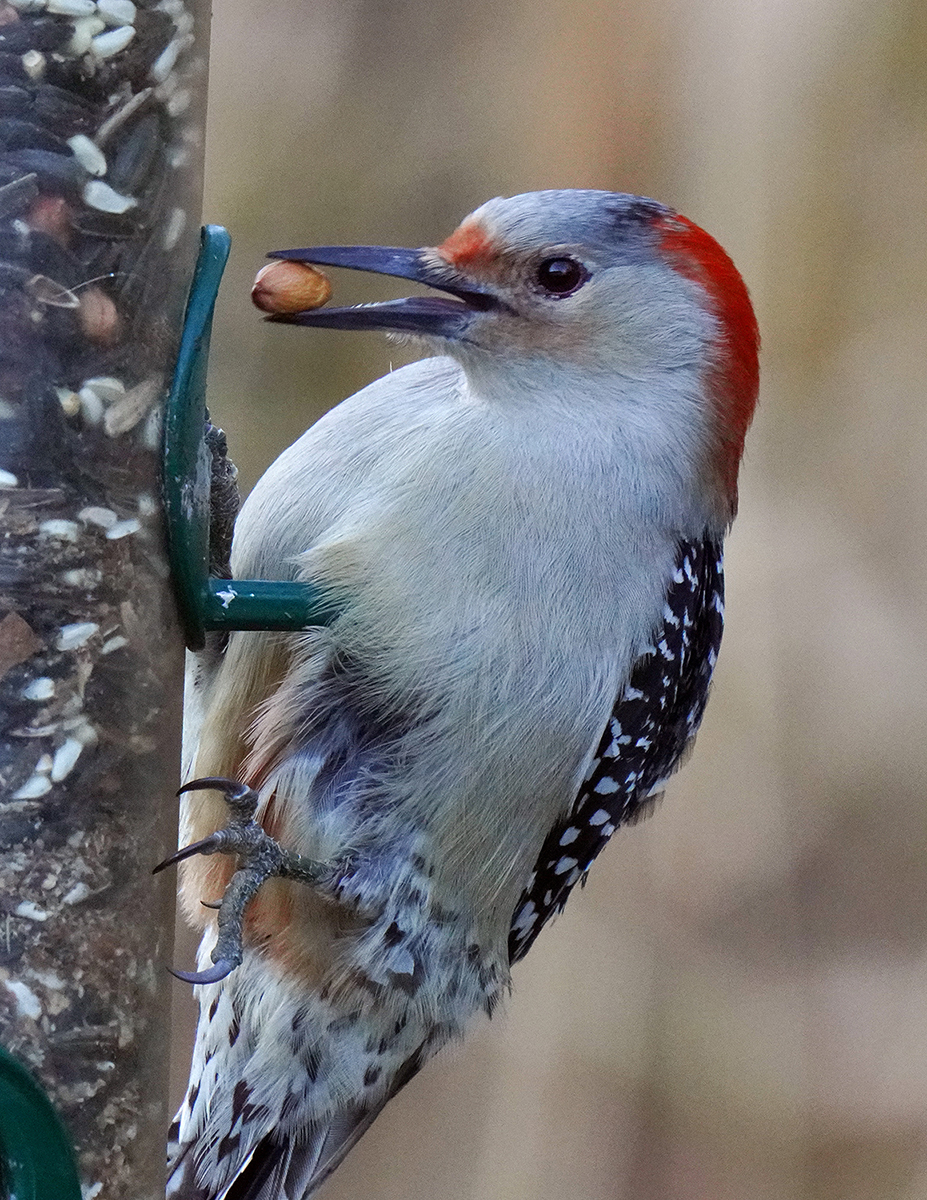 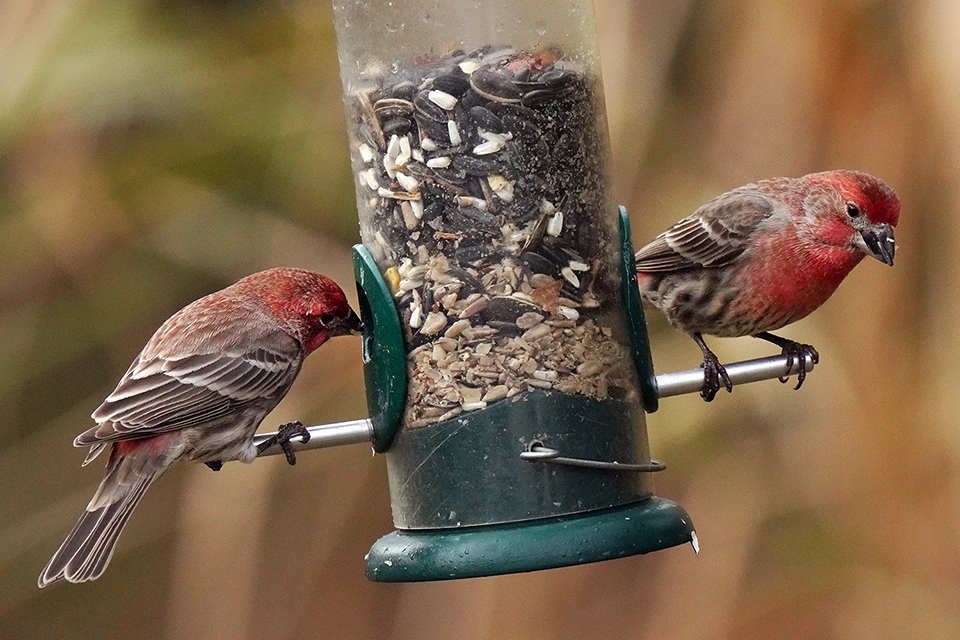 A male red-bellied woodpecker (Melanerpes carolinus) at the suet feeder. 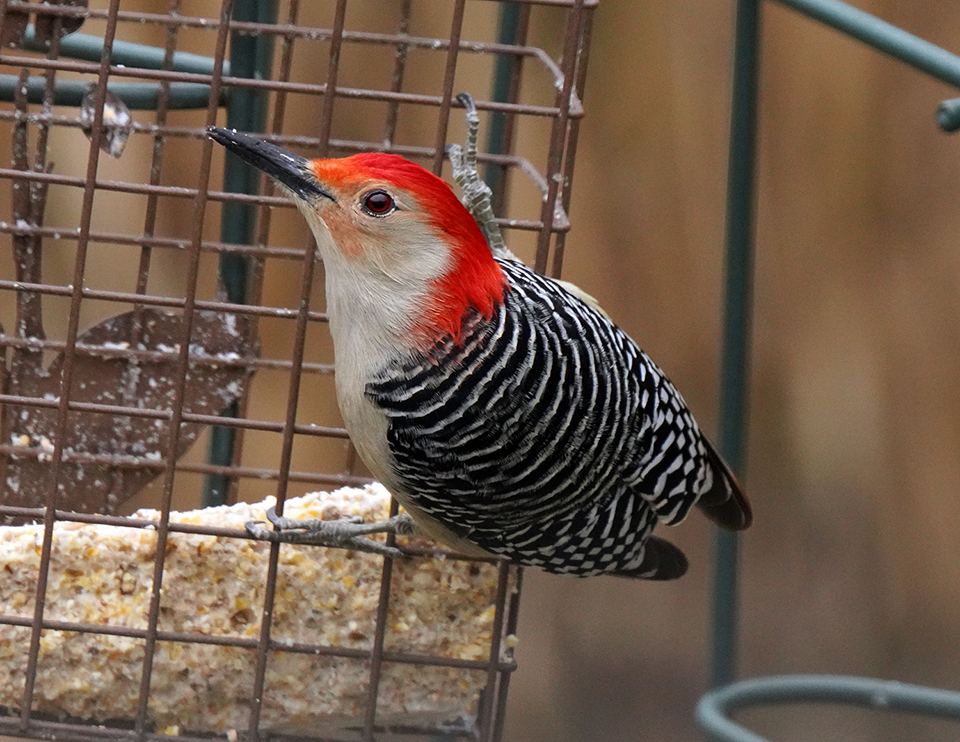 A tufted titmouse (Baeolophus bicolor) at the feeder one frosty morning. 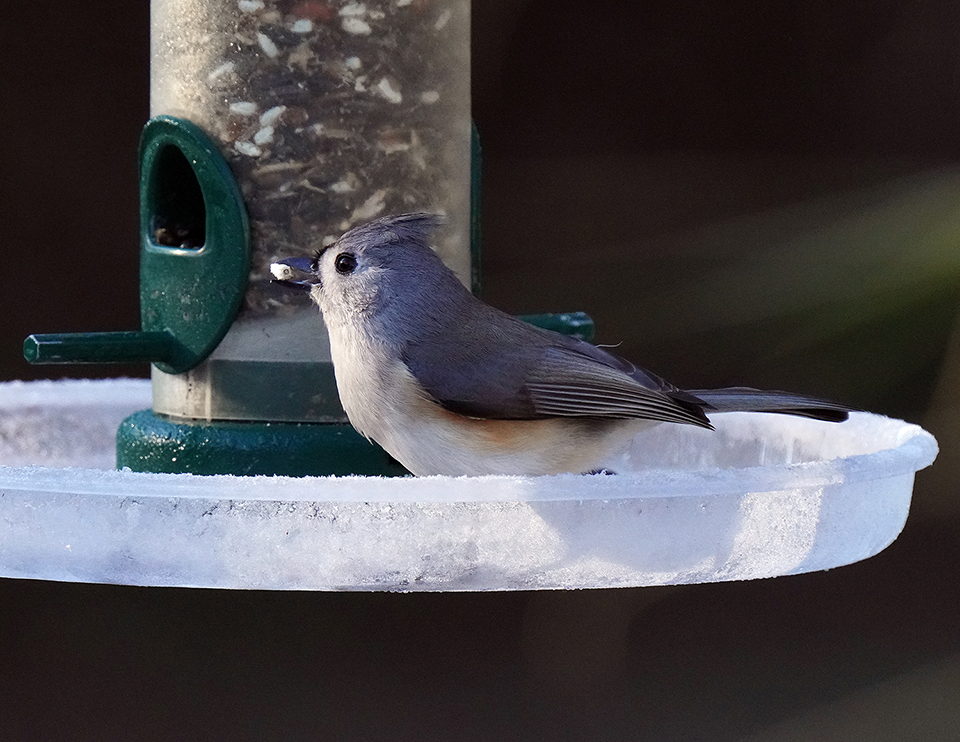 A white-breasted nuthatch (Sitta carolinensis). These birds are becoming quite numerous in the yard. 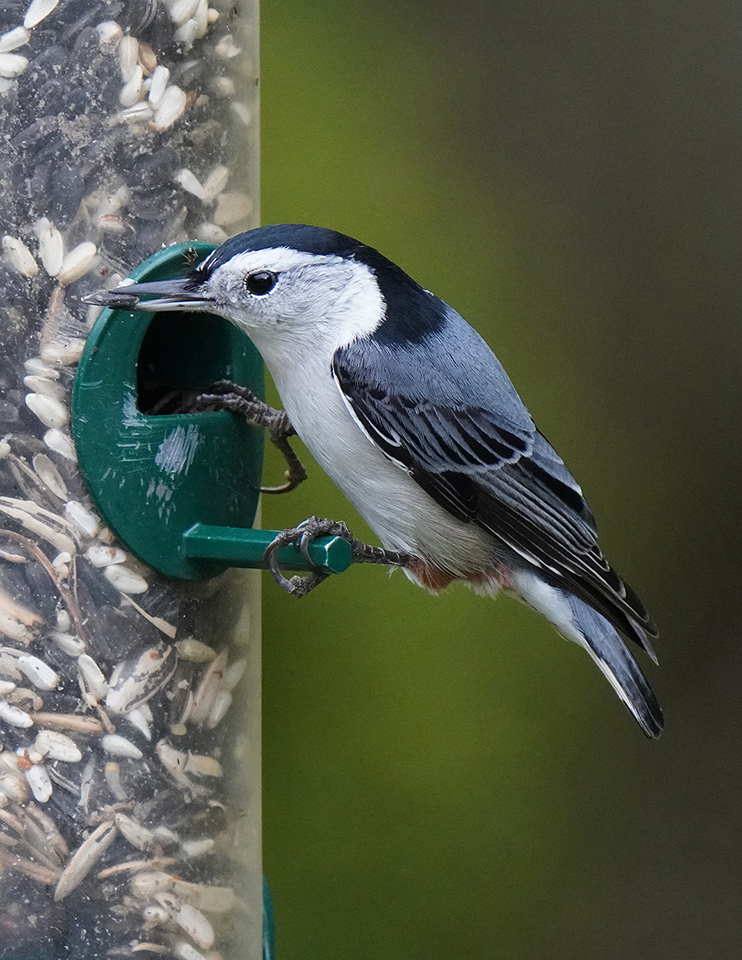 One morning, my neighbor called to tell me that evening grosbeaks (Coccothraustes vespertinus) had been spotted in Pony Pasture Rapids park, a couple of miles south of Forest Hill where we live. Pony Pasture is heavily wooded with well maintained trails throughout the park, making it a great spot for bird watchers. I spotted this male pileated woodpecker (Dryocopus pileatus) while searching for the grosbeaks. He was so intent on his search for grubs and insects that I was able to get quite close to him. 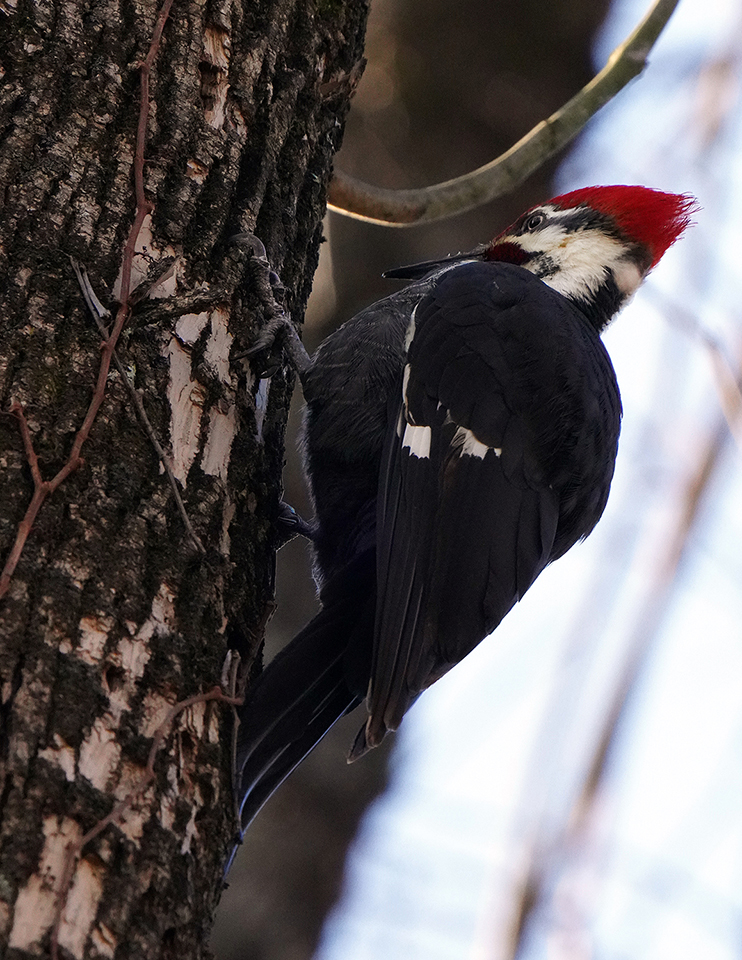 A male evening grosbeak (Coccothraustes vespertinus). The park was full of “bird nerds” that morning as word got out on social media about the grosbeaks at Pony Pasture.  Our search paid off and we spotted flocks of the birds feeding on box elder seeds. 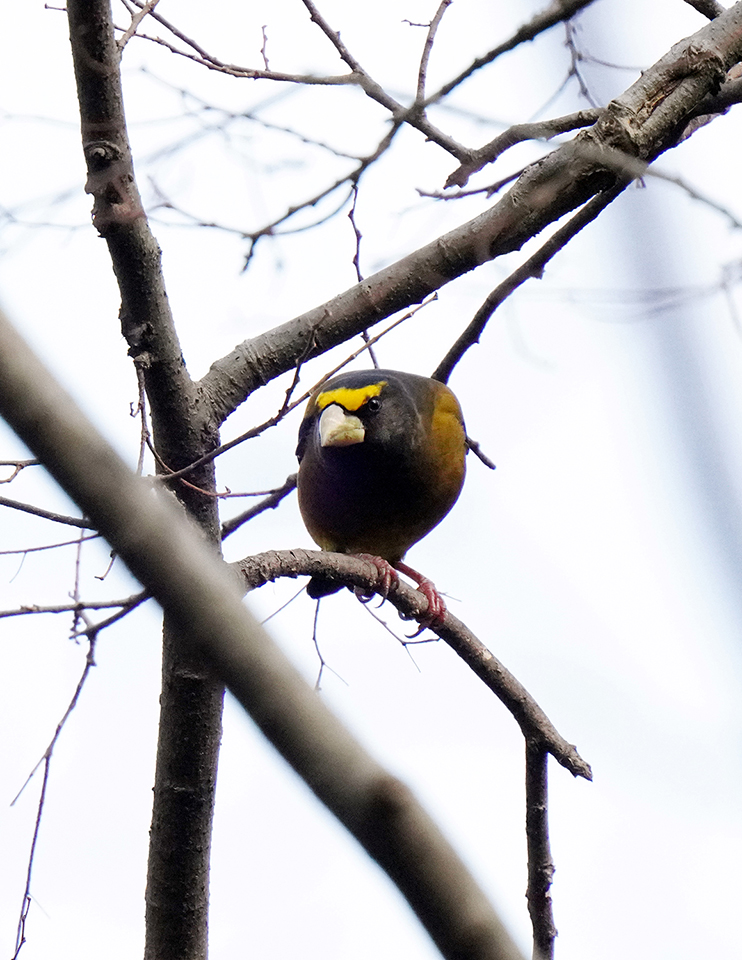 The evening grosbeaks (Coccothraustes vespertinus) were feeding ravenously, sometimes executing amazing acrobatics to get at the seeds. 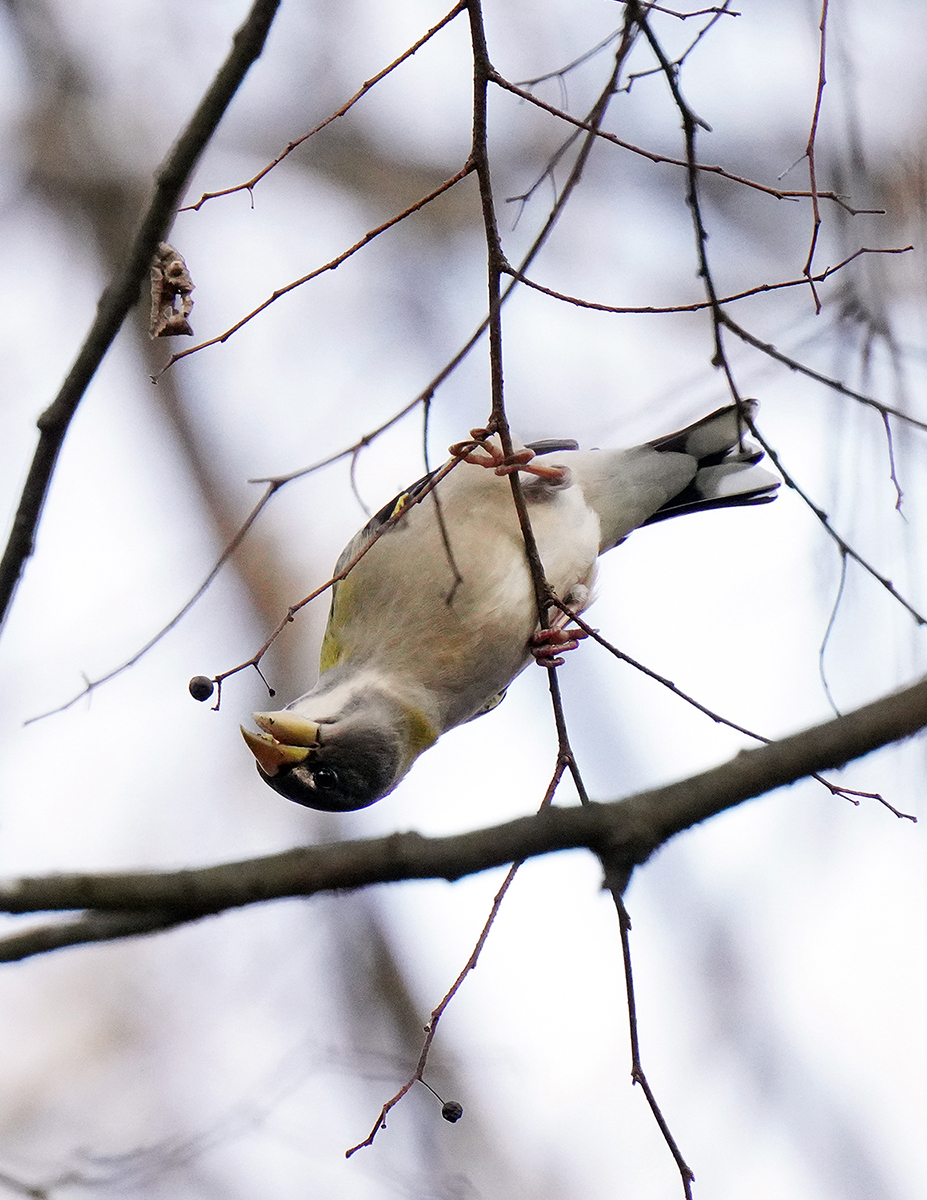 A barred owl (Strix varia) snoozing the day away at Pony Pasture. This owl is one of a pair who nest in the same spot year round. It is pretty easy to get a photo of one or both owls most mornings. 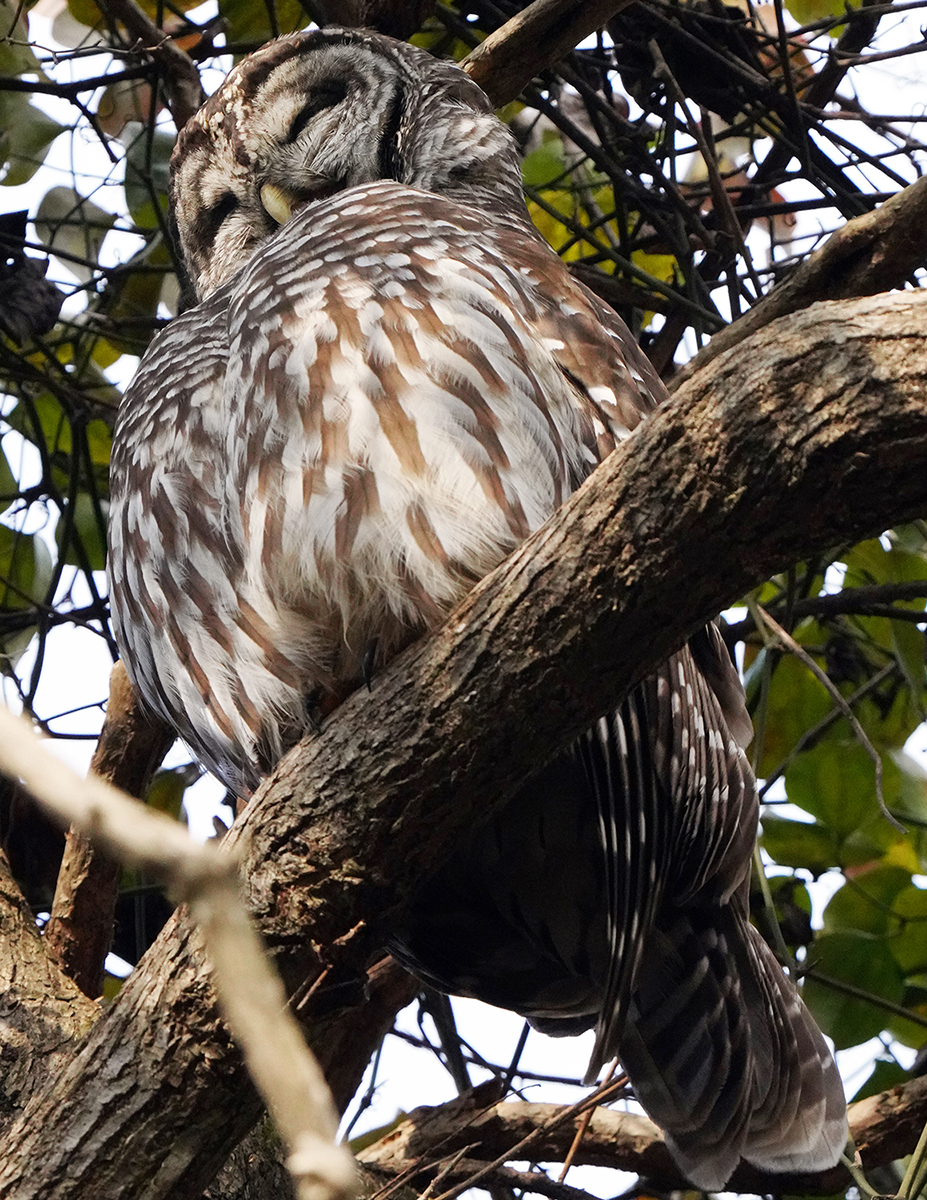 A brown-headed cowbird (Molothrus ater). I have seen only a couple of these birds in the neighborhood. Cowbirds lay their eggs in the nests of other birds, letting the others hatch and feed their young. 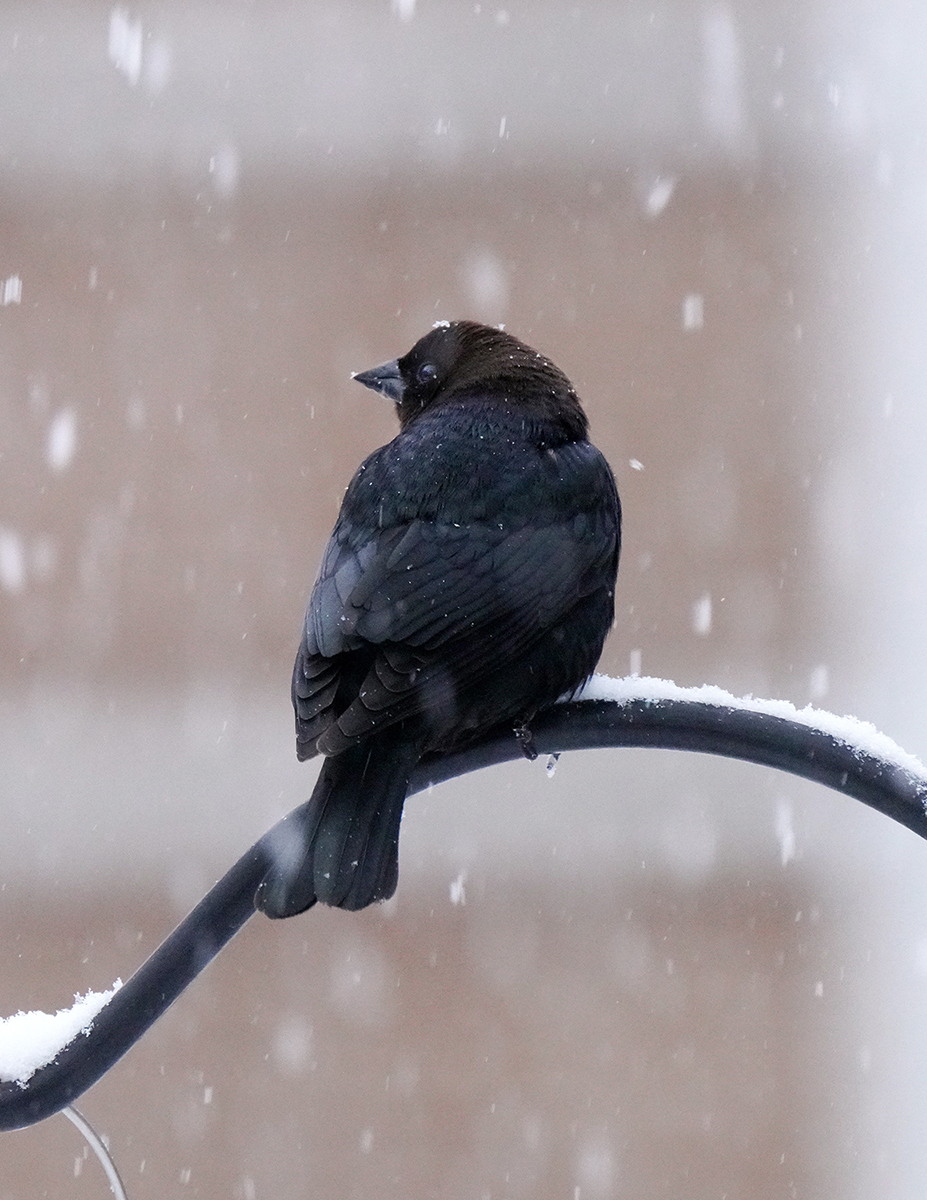 A yellow-rumped warbler (Setophaga coronata) AKA “butterbutt”.  These are fairly new to the neighborhood, appearing in the last couple of weeks. 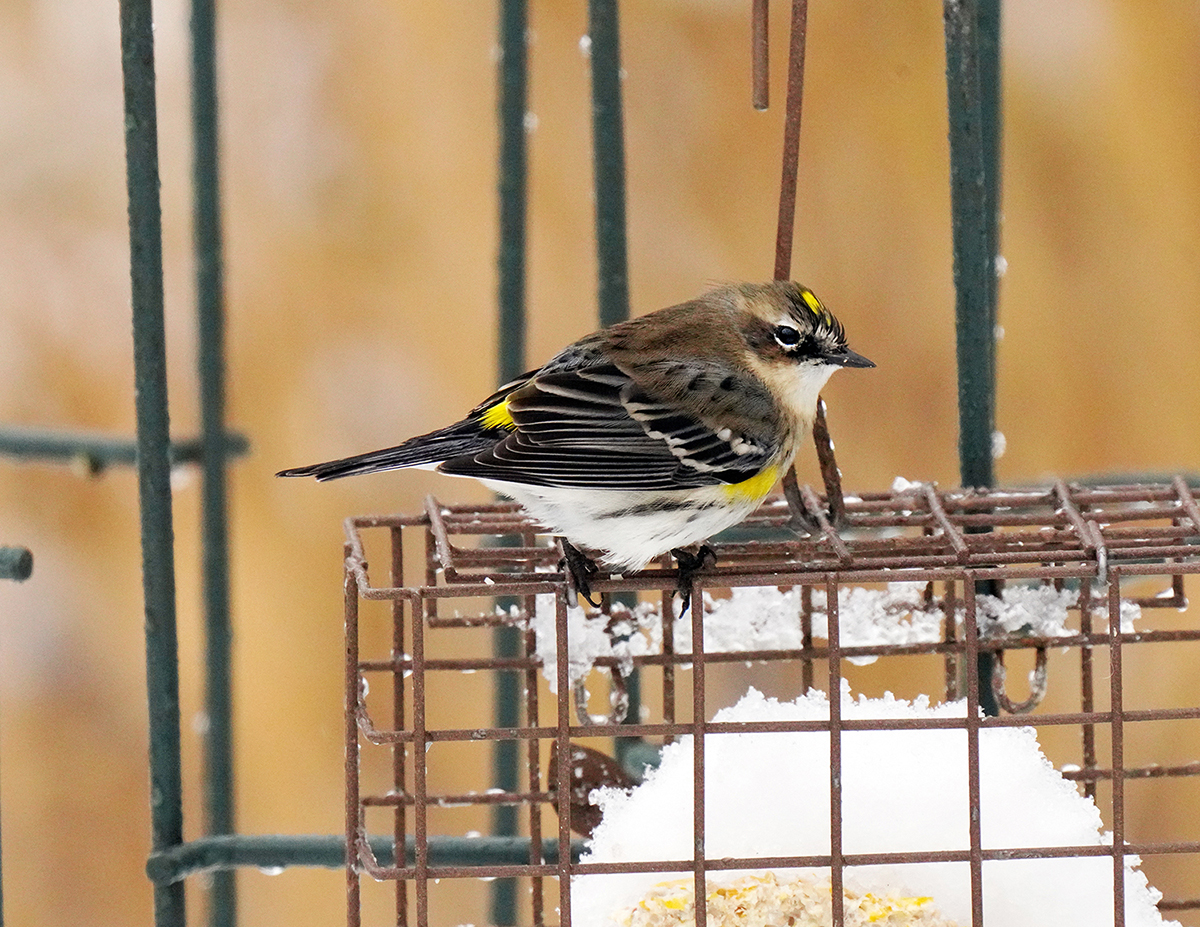 A female northern cardinal (Cardinalis cardinalis) waiting her turn at the feeders. 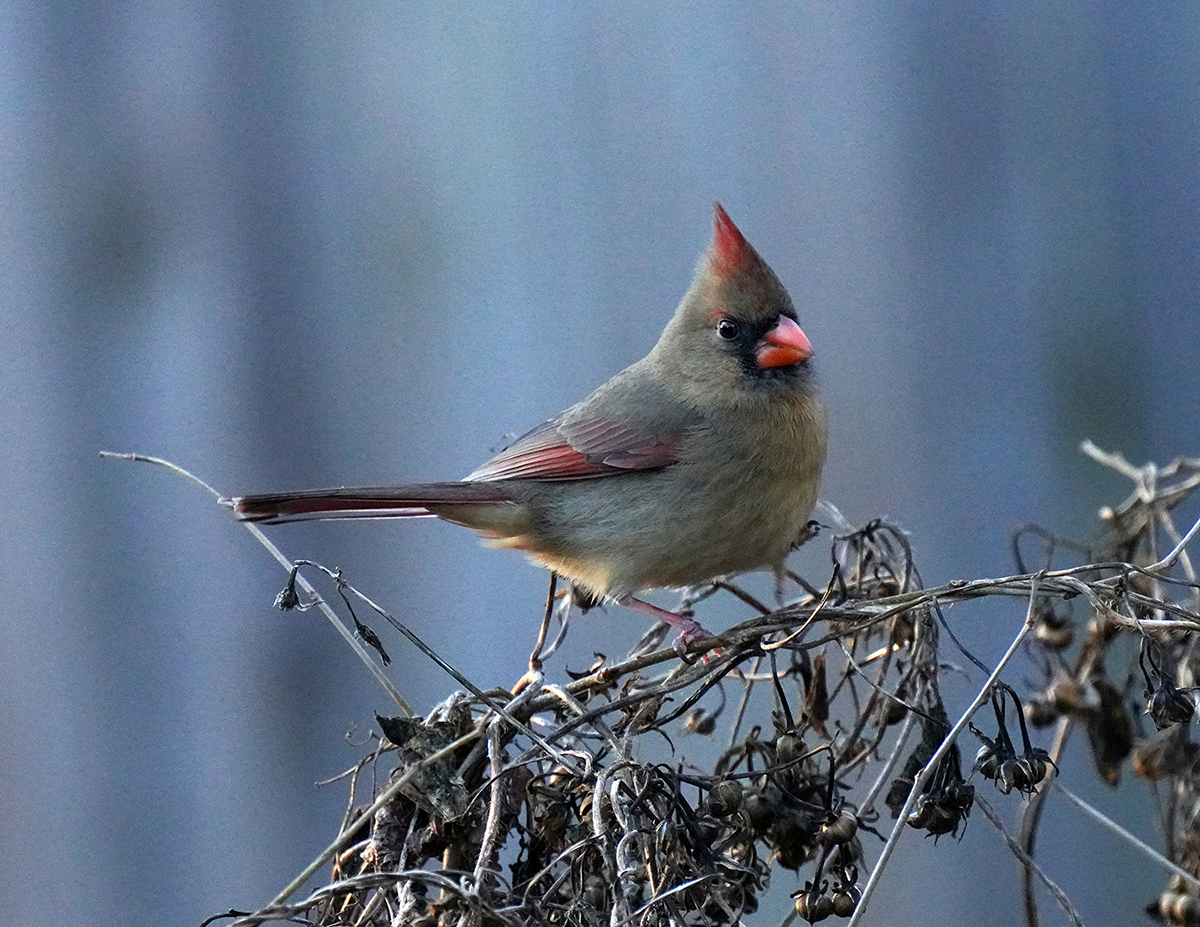 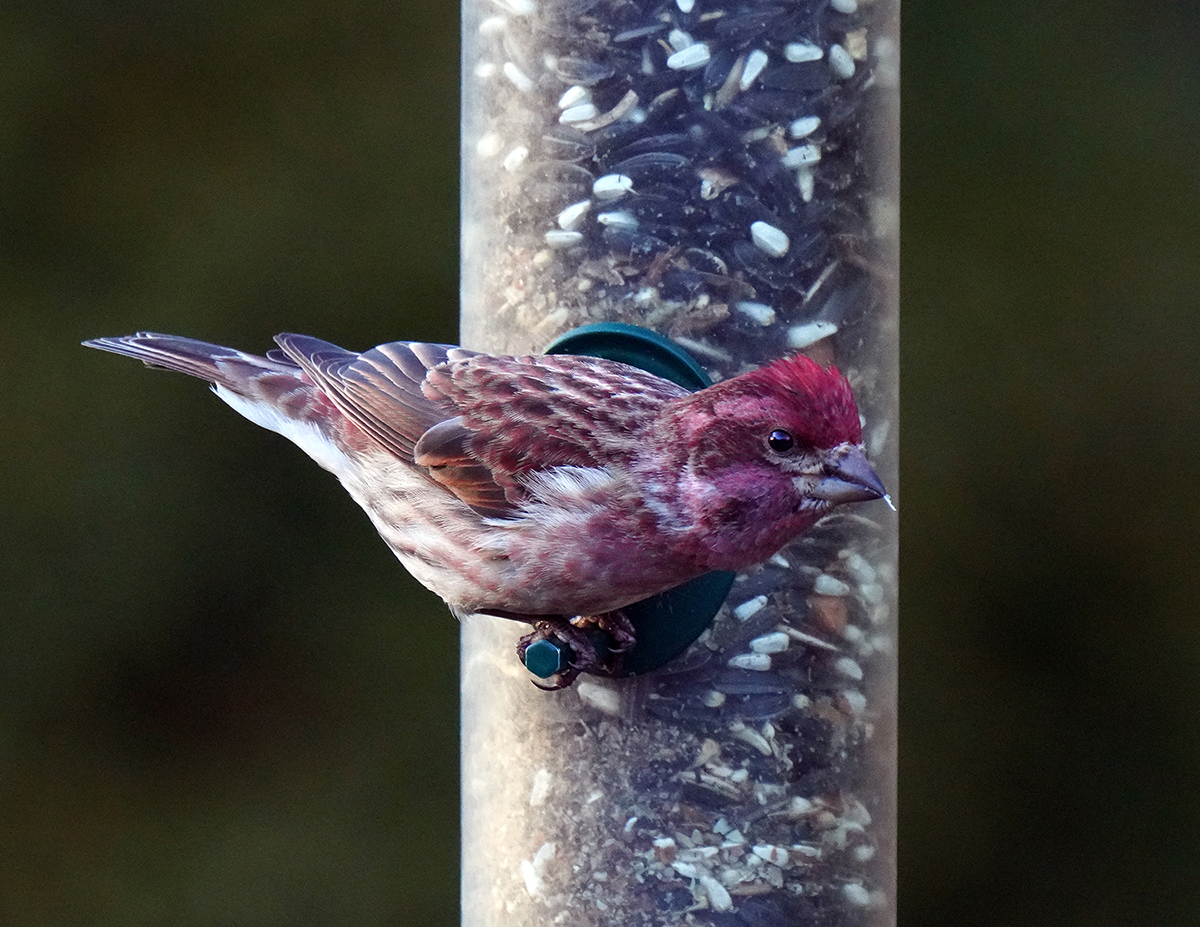 A ruby-crowned kinglet (Regulus calendula). These little guys are becoming regulars at the feeders. They are totally fearless, and will not fly away even when I am only a few feet away from the feeders. 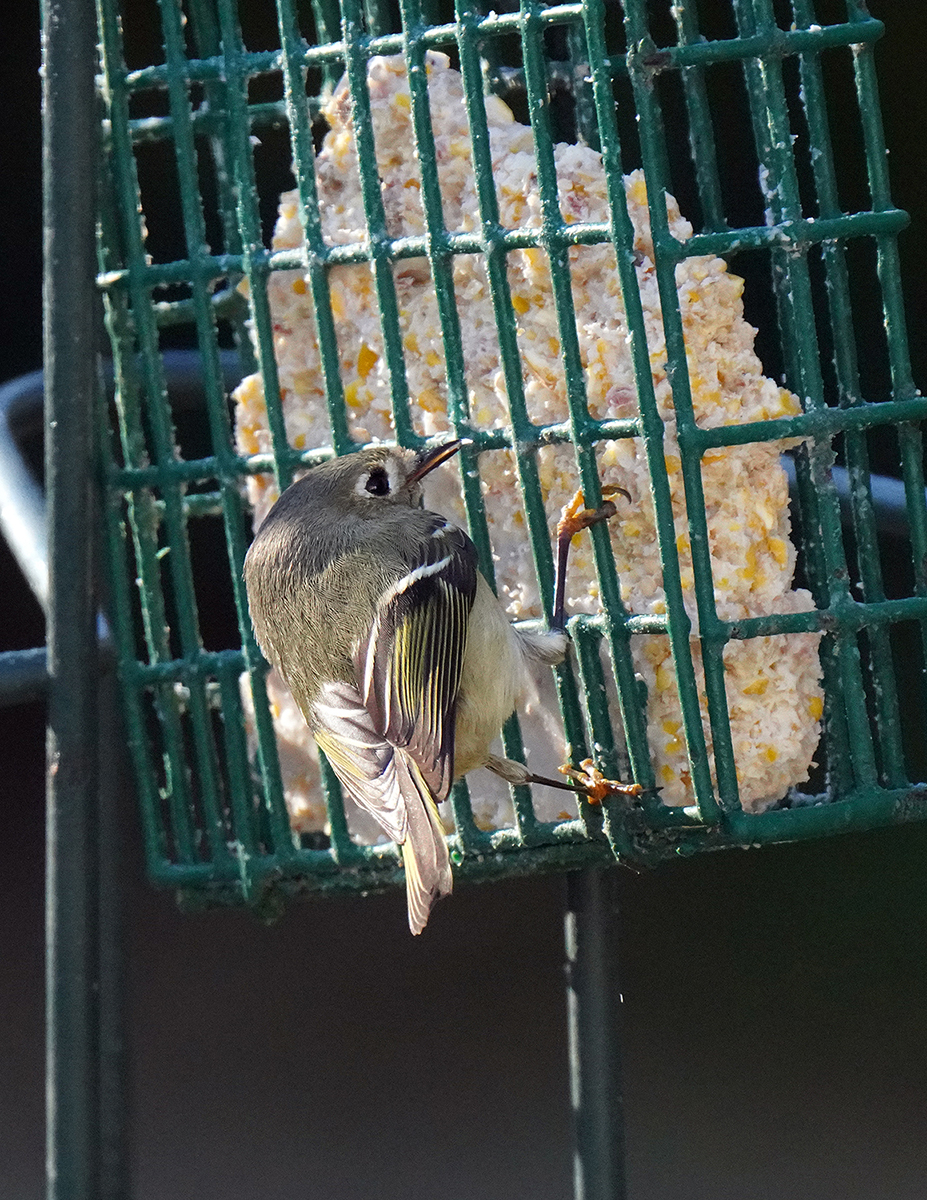 Never challenge this red winged blackbird (Agelaius phoeniceus) to a splits competition! They show up in flocks when the weather is rainy. 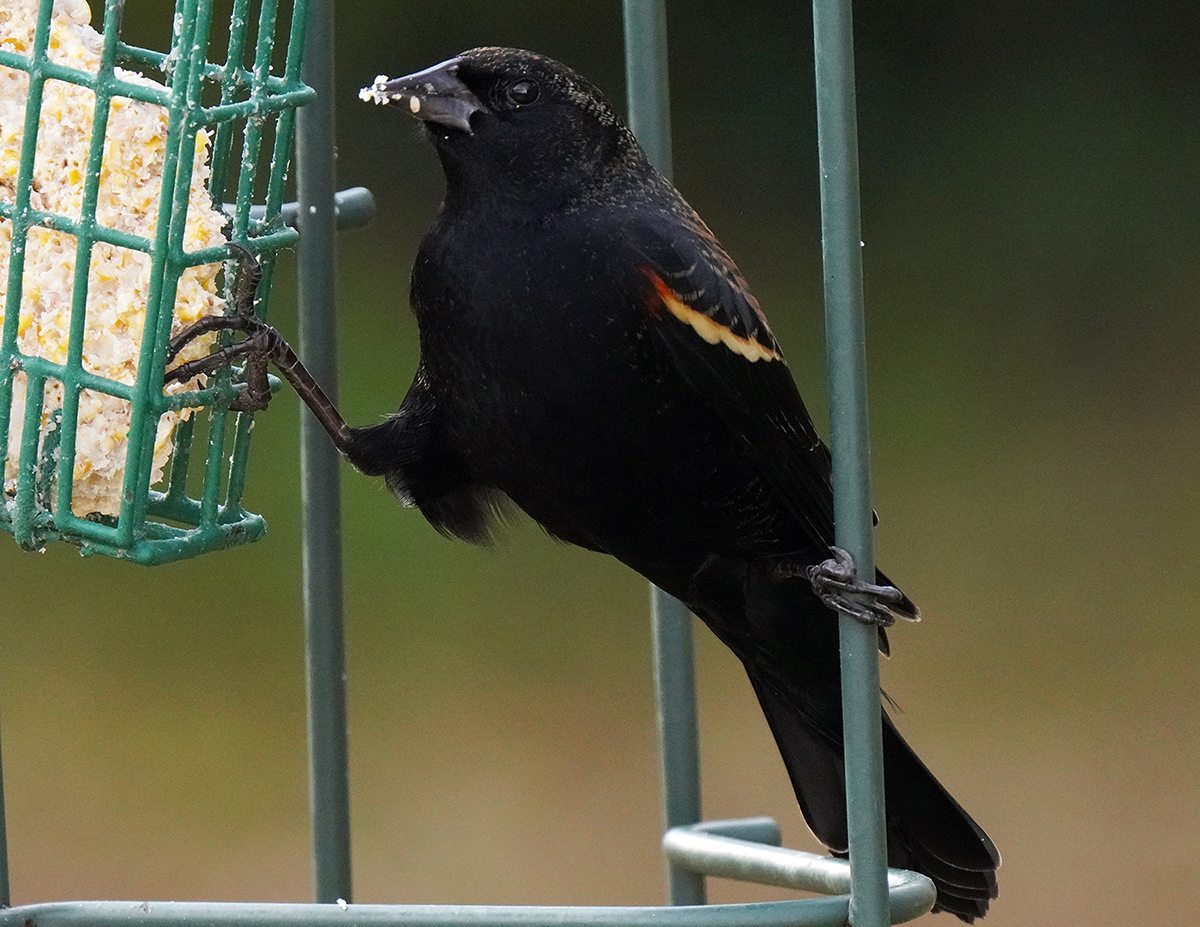 This Carolina wren (Thryothorus ludovicianus) alternates between the suet feeders and the seed feeders, about the only bird that eats both. A house finch (Haemorhous mexicanus) looks on in the background. 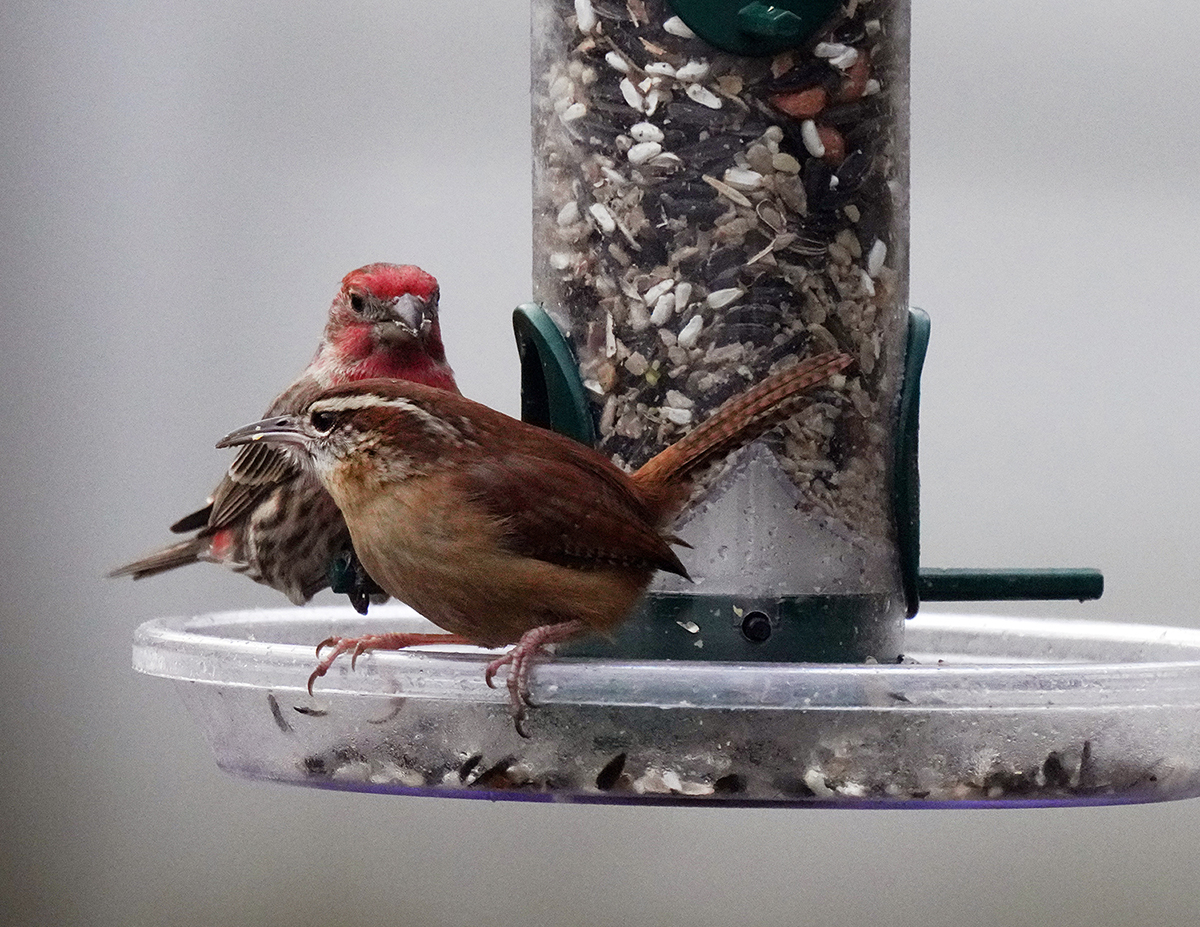 An angry looking brown thrasher (Toxostoma rufum). Probably remembering the good old days when they were dinosaurs and used to eat the critters that evolved into humans. 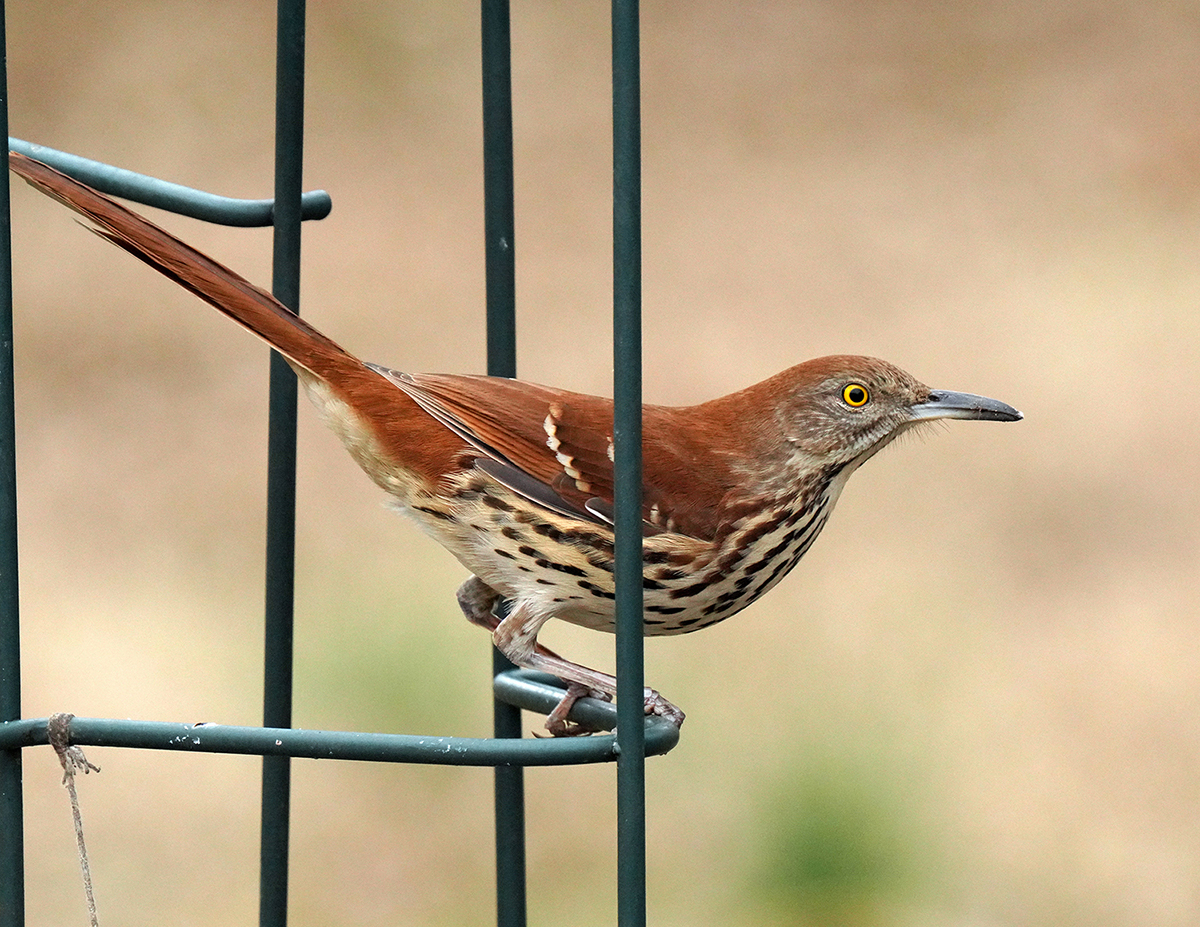 This red-breasted nuthatch (Sitta canadensis) is waiting his turn at the feeder as a pesky Eastern gray squirrel (Sciurus carolinensis) gorges himself.  The squirrels destroyed one of my feeders, which was made of a thin plastic. They figured out that they could chew through the plastic to enlarge the openings and get all the seeds at one time. 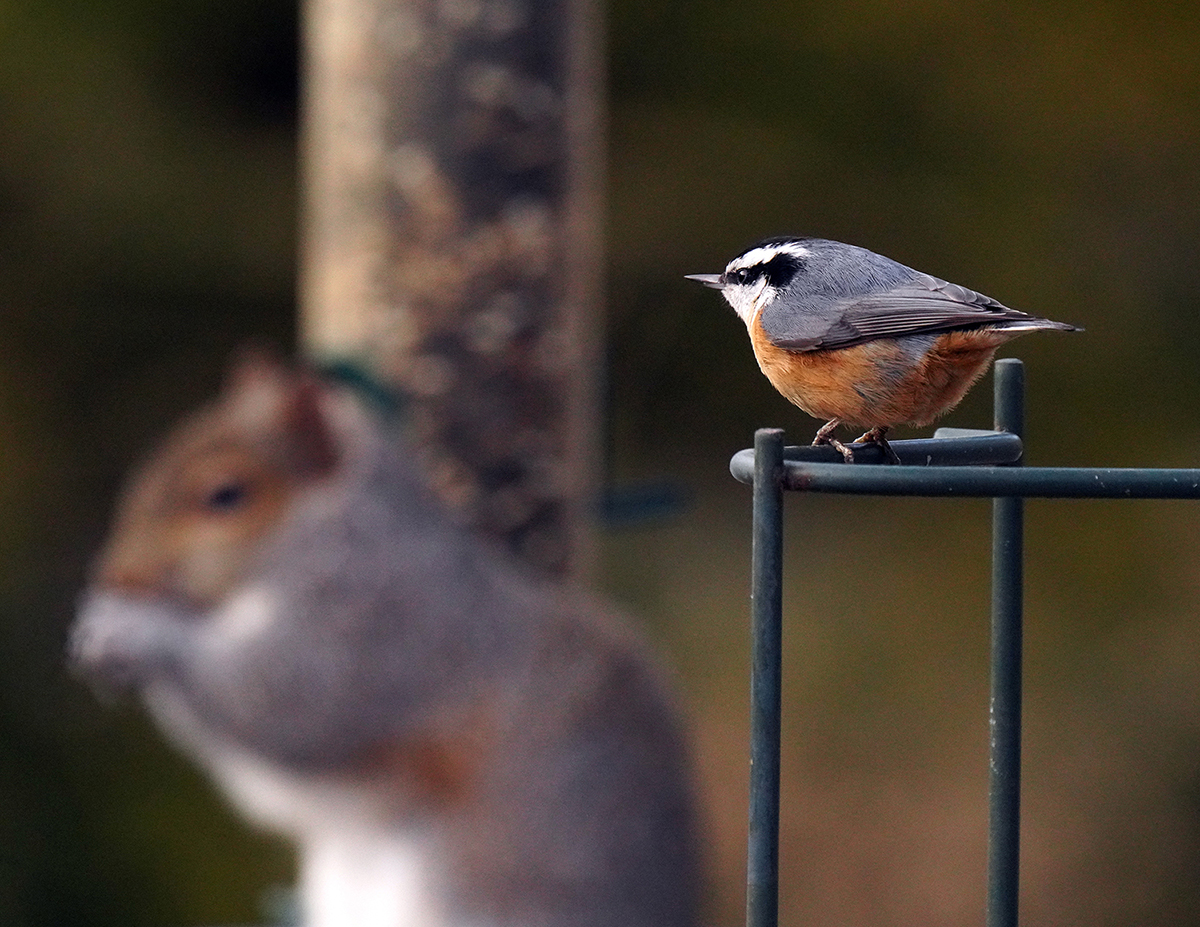 Bonus video: The Breakfast Crew in the snow we had over the weekend (play it by clicking the blue box and going to Vimeo):