The tweet from Bari Weiss below may exaggerate a tad when it says that the proposed California Ethnic Studies Model Curriculum (ESMC), a required course for 6 million California public high-school students ordered by the governor, is the most important story in the Jewish world this month.

Thread: There is no more important story in the Jewish world this month. Read it. You think you know how bad the California ethnic studies curriculum. It's way, way worse. And it affects millions of children: https://t.co/Mtg26X5nzx

But the story is extremely important for two reasons.

First, the curriculum is not just a denigration of Jews and Israel, as well as the elevation of the BSD movement, but also a denigration of the earlier civil rights movement, downplaying nonviolent methods of Dr. King and the advances of the Sixties, and emphasizing instead the Black Lives Matter movement (see below for an objection from Civil Rights icon and MLK advisor Clarence Jones).  The lesson for Jews, though, is that California will soon be in the business of casting them as oppressors, so young people will get a formal lesson on the demonization of Israel and the glorification of the oppressed Palestinians. Jewish high-school students in California are in for a bad time—and worse when they get to college.

And that underscores the second reason this plan is odious: it’s infused with Critical Race Theory (CRT) and the oppression narrative, which will promote identity politics and set the groups in multiracial California against one another. I have no objection to ethnic studies per se: after all, 40% of California students are members of minority groups. But this plan in particular uses ethnic diversity to construct and emphasize a hierarchy of power and push the narrative of White Toxicity. And of course since California has more students than any other state save Texas, its recommendations will undoubtedly be adopted by other states. We will have an entire generation educated to either be inculcated with guilt for what their ancestors did, or be inculcated with resentment for having ancestors that were oppressed. In other words, the curriculum is designed to produce a Woke Generation.

If you don’t believe me, read the two stories below, one from Tablet and the other from Jewish Journal (no, you won’t find this in many liberal papers), or access the curriculum at these three sites. 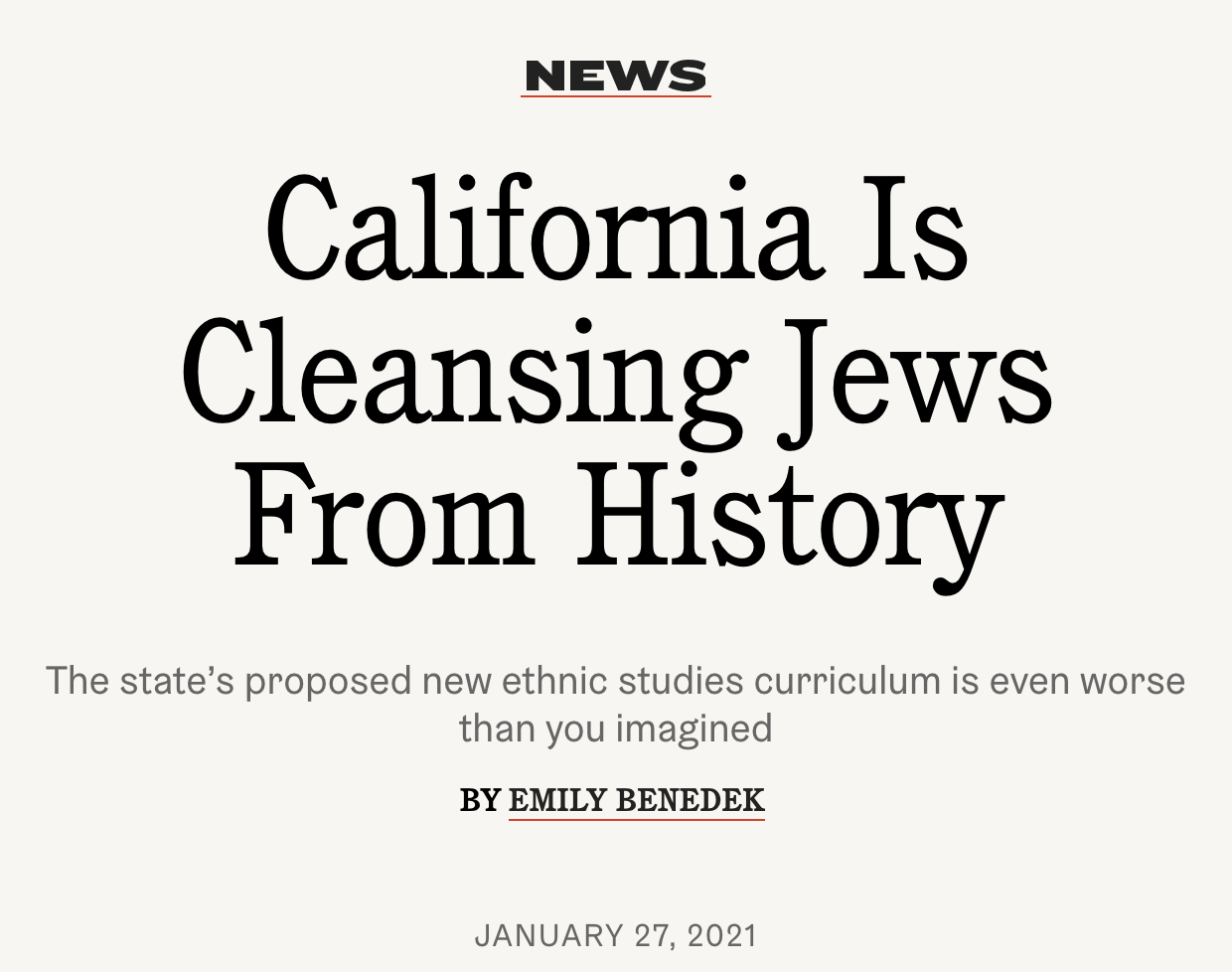 and this from Jewish Journal:

Some excerpts from Tablet. Note that some aspects of the original curriculum have been changed, but I’ll have to take the word of these two sources, as the documents are scattered all over the place.

[In 2019], when the first draft of the Ethnic Studies Model Curriculum (ESMC) was released, Kaplan [Elina Kaplan, California tech manager with two children] couldn’t believe what she was reading. In one sample lesson, she saw that a list of historic U.S. social movements—ones like Black Lives Matter, #MeToo, Criminal Justice Reform—also included the Boycott, Divestment, and Sanctions Movement for Palestine (BDS), described as a “global social movement that currently aims to establish freedom for Palestinians living under apartheid conditions.” Kaplan wondered why a foreign movement, whose target was another country, would be mischaracterized as a domestic social movement, and she was shocked that in a curriculum that would be taught to millions of students, BDS’s primary goal—the elimination of Israel—was not mentioned. Kaplan also saw that the 1948 Israel War of Independence was only referred to as the “Nakba”—“catastrophe” in Arabic—and Arabic verses included in the sample lessons were insulting and provocative to Jews.

Kaplan, 53, a Bay Area mother of two grown children who describes herself as a lifelong Democrat, was further surprised to discover that a list of 154 influential people of color did not include Dr. Martin Luther King Jr., John Lewis, or Supreme Court Justice Thurgood Marshall, though it included many violent revolutionaries. There was even a flattering description of Pol Pot, the communist leader of Cambodia’s Khmer Rouge, who was responsible for the murder of a quarter of the Cambodian population during the 1970s.

Oy! Apartheid again, and, as usual, totally deceptive. And Pol Pot! But wait! There’s more! The whole plan was full of CRT jargon, propaganda, and implicit calls for activism:

Kaplan began calling friends. “Have you read this?” she asked, urging them to plow through the 600-page document. The language was bewildering. “Ethnic Studies is about people whose cultures, hxrstories, and social positionalities are forever changing and evolving. Thus, Ethnic Studies also examines borders, borderlands, mixtures, hybridities, nepantlas, double consciousness, and reconfigured articulations. …” This was the telltale jargon of critical race theory, a radical doctrine that has swept through academic disciplines during the last few decades.

I had to look up “nepantlas“, which I thought were trousers.

. . . The new curriculum, which will eventually be promulgated throughout the California school system of 6 million children, would “critique empire and its relationship to white supremacy, racism, patriarchy, cisheteropatriarchy, capitalism, ableism … and other forms of power and oppression,” according to the proposal. It would “build new possibilities for post-imperial life that promotes collective narratives of transformative resistance.”

Capitalism was classified as a form of “power and oppression,” and although “classism, homophobia, Islamophobia, and transphobia” were also listed as forms of oppression, anti-Semitism was not. Jewish Americans were not even mentioned as a minority group.

It’s not just Jews who are objecting, and I, for one, object much more to the overall narrative of the plan than to its characterization of Jews. Click on the links above to see more. I particularly deplore the downplaying of Dr. King and his associates, and the advances that peaceful civil rights protests made in the Sixties.

Kaplan wasn’t the only one upset about the Ethnic Studies Model Curriculum. Clarence Jones, former legal counsel and speechwriter for Martin Luther King Jr., in a letter he wrote to Gov. Gavin Newsom and the state’s Instructional Quality Commission, called the ESMC a “perversion of history” for providing material that refers to non-violent Black leaders as “passive” and “docile.” Jones, who is co-founder of the University of San Francisco Institute for Nonviolence and Social Justice, decried the “glorification” of violence and Black nationalism as “role models for the students,” and rejected the curriculum as “morally indecent and deeply offensive.”

The unassailably liberal LA Times editorial board weighed in, criticizing the offering as “an impenetrable mélange of academic jargon and politically correct pronouncements” that served as an “exercise in groupthink, designed to proselytize and inculcate more than to inform and open minds.” It warned it was “in bad need of an overhaul.”

Here’s an excerpt from Jones’s letter: 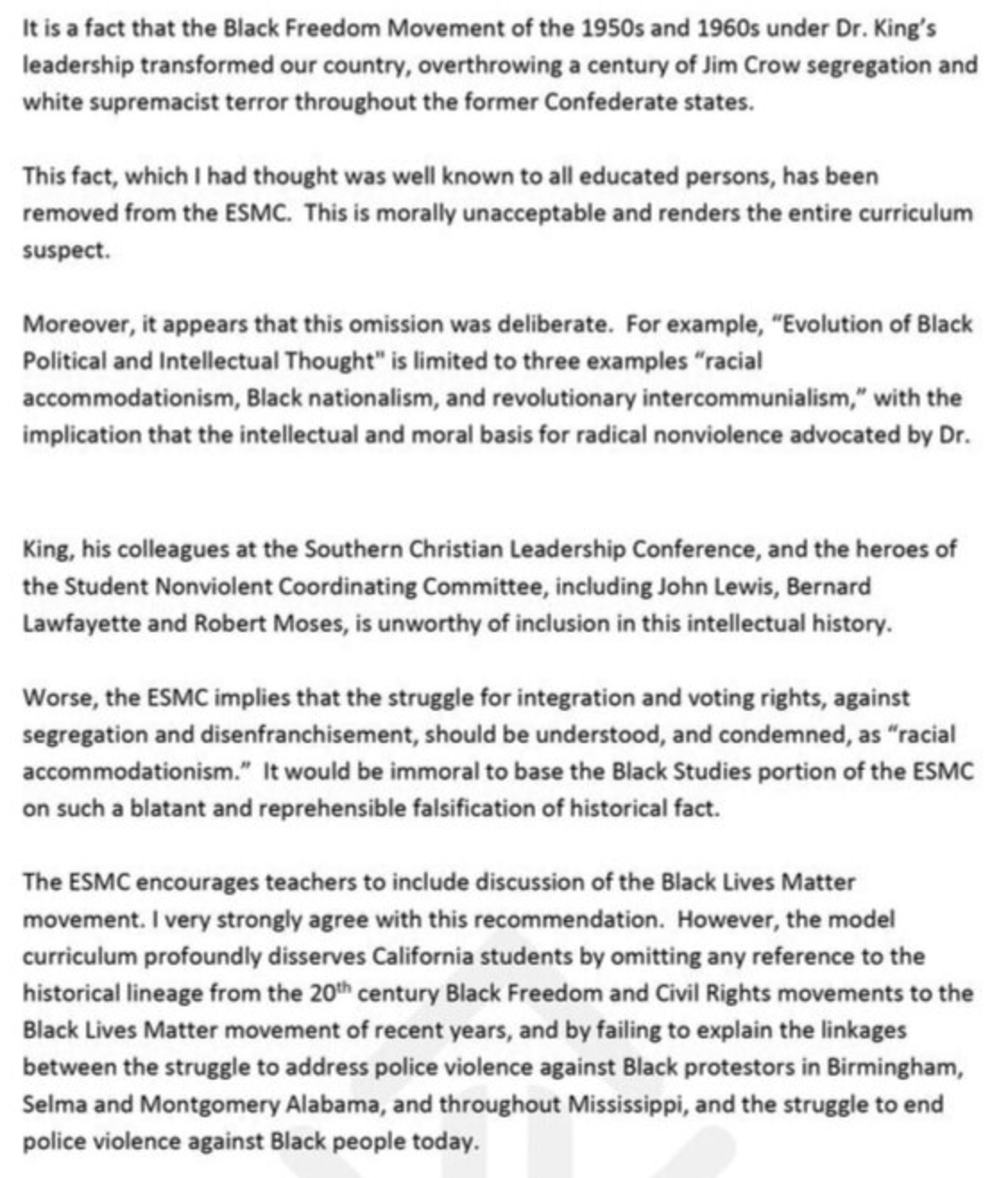 And from the editorial from the entire Los Angeles Times Editorial Board, a paper that is of course on the Left, criticizing the ESMC as “an exercise in groupthink”.

We have no objection to a course that broadens students’ thinking about race and gender and sexuality and history and power. But too often the proposed ethnic studies curriculum feels like an exercise in groupthink, designed to proselytize and inculcate more than to inform and open minds. It talks about critical thinking but usually offers one side and one side only.

. . .Similarly, there’s a suggested list of social movements that students might research — but here again, the curriculum feels awfully one-sided. There’s nothing wrong with students studying the Black Panther Party or the Third World Liberation Front or the Occupy Movement or the Palestinian-led BDS movement. But what happened to studying a range of ideas, reflecting a variety of ideologies and perspectives, and having students take sides, dispute and debate those ideas, honing their research and thinking in the process, and ultimately deciding for themselves? This curriculum feels like it is more about imposing predigested political views on students than about widening their perspectives. [JAC: that’s because it is!]

Among other things, the model curriculum lists capitalism with white supremacy and racism as “forms of power and oppression.” OK, but shouldn’t students also hear arguments that capitalism has allowed for an expansion over time of the middle class, or even from those who believe in a laissez-faire, sink-or-swim economy.

And isn’t it possible that some students won’t agree with the curriculum’s assertion that BDS is a social movement “whose aim is to achieve freedom through equal rights and justice.” Does that perhaps merit further debate?

The governor signed this against the recommendations of the Cal State system’s chancellor, board of trustees, and academic senate, all of whom did not oppose ethnic studies courses, but objected to the state forcing a specified and standardizes curriculum down their throat.

And yes, there have been revisions, but they’re pretty dire. Moreover, the curriculum itself notes that “additional counselors will be required to help students deal with the trauma of the new content.” Trauma! You know what that means: the curriculum is designed to upset students.

Here are two more excerpts about the source of the curriculum and a few changes that have been made after citizen’s comments (you can still comment here until March 17):

Tammi Rossman-Benjamin, director of AMCHA Initiative, which fights campus anti-Semitism, points out that all 13 founding members of the Critical Ethnic Studies Association (CESA) are BDS activists. CESA, the national home base for critical studies, passed a resolution to boycott all Israeli academic institutions in 2014, and the group’s past four biennial meetings included multiple sessions demonizing Israel. “There are a couple thousand academic boycotters of Israel in the country,” she said, “and the largest percentage of them come from ethnic studies. Anti-Zionism is built into the theory and the discipline of ethnic studies, which demonizes Israel as an apartheid settler-colonialist Nazi state.”

. . . . To placate critics, the third version has added lessons about Korean Americans, Armenian Americans, and Sikhs. Two lessons have been offered about Jews. One, following crude CRT dogma, teaches that Mizrahi Jews coming to the United States from Arab lands were mistreated by “white” Ashkenazim. The other suggests that Jews of European descent have white privilege.

The Jewish Journal points out that Jews are the only group in the curriculum for whom the term “privilege” is used. And this privilege is not earned by way of talent, or educational and professional attainment, but rather trickery. The ESMC, echoing Nazi propaganda about Jews as impostors and appropriators hiding in plain sight, points out that American Jews often change their names (“this practice of name-changing continues to the present day”) to change their rank in the social hierarchy.

What the hell? If this isn’t anti-Semitism, it’s rubbing elbows with it.  Well, this is going to happen, and California students can expect to be set against one another in class.

But it’s not just California. Get a load of what’s going down in Seattle:

Meanwhile, the city of Seattle has already created a proposed framework for implementing ethnic studies throughout its K-12 curriculum. Math teachers will ask the following questions: “identify how math has been and continues to be used to oppress and marginalize people and communities of color,” “analyze the ways in which ancient mathematical knowledge has been appropriated by Western culture,” “how important is it to be right?” and “Who gets to say if an answer is right?” It appears educational leaders are all for this. The president of the National Council of Teachers of Mathematics, Robert Q. Berry III, told Education Week: “What they’re doing follows the line of work we hope we can move forward as we think about the history of math and who contributes to that, and also about deepening students’ connection with identity and agency.”

This is happening everywhere, including, of course, colleges. The major thrust of education now seems to be not learning itself, but promoting social engineering along the lines of CRT. The wave seems unstoppable unless people like us, unafraid of being tarred with the inevitable label of “racist”, object to the propagandizing of society—and especially of children.