Before I go home to rest while my body battles designer spike proteins, I’ll leave you with a recommended article from Bari Weiss’s new Substack site.

It’s an interview with Natan Sharansky (b. 1948), now an Israeli but formerly a Russian anti-government activist who spent nine years in prison for “treason,” much of it on hunger strikes and being force-fed.  When the Russians said they’d release Sharansky if he asked on humanitarian grounds (he’d have to plead poor health from the hunger strikes), he refused, and explains why in his interview with Weiss.  Later, after an international appeal orchestrated by Sharansky’s wife, he was released in exchange for Russian spies captured in other countries. He emigrated to Israel, where after a stint in the Knesset and other governmental positions, he now heads the Institute of the Study of Global Antisemitism and Policy.

What Weiss is after, and what Sharansky is equipped to tell her, is why Alexei Navalny (b. 1976), another refusenik who was jailed and then seriously poisoned, almost surely on the orders of Putin, would dare return to Russia and face either imprisonment or death. Why didn’t Navalny just stay in Europe, where at least he’d be guaranteed to live (well, he’d probably live).  Upon arrival at the Moscow Airport on January 17, Navalny was detained and has since disappeared. Three days ago, his treatment by Putin’s government led to an unheard-of event: mass protests against the government across the country.  This makes Navalny a valuable commodity, for if he were killed or disappeared, Russians would rise up against the regime.

Navalny isn’t available for an interview, of course, but Weiss talked to Sharansky by phone, and transcribed their conversation Click on the screenshot to read. 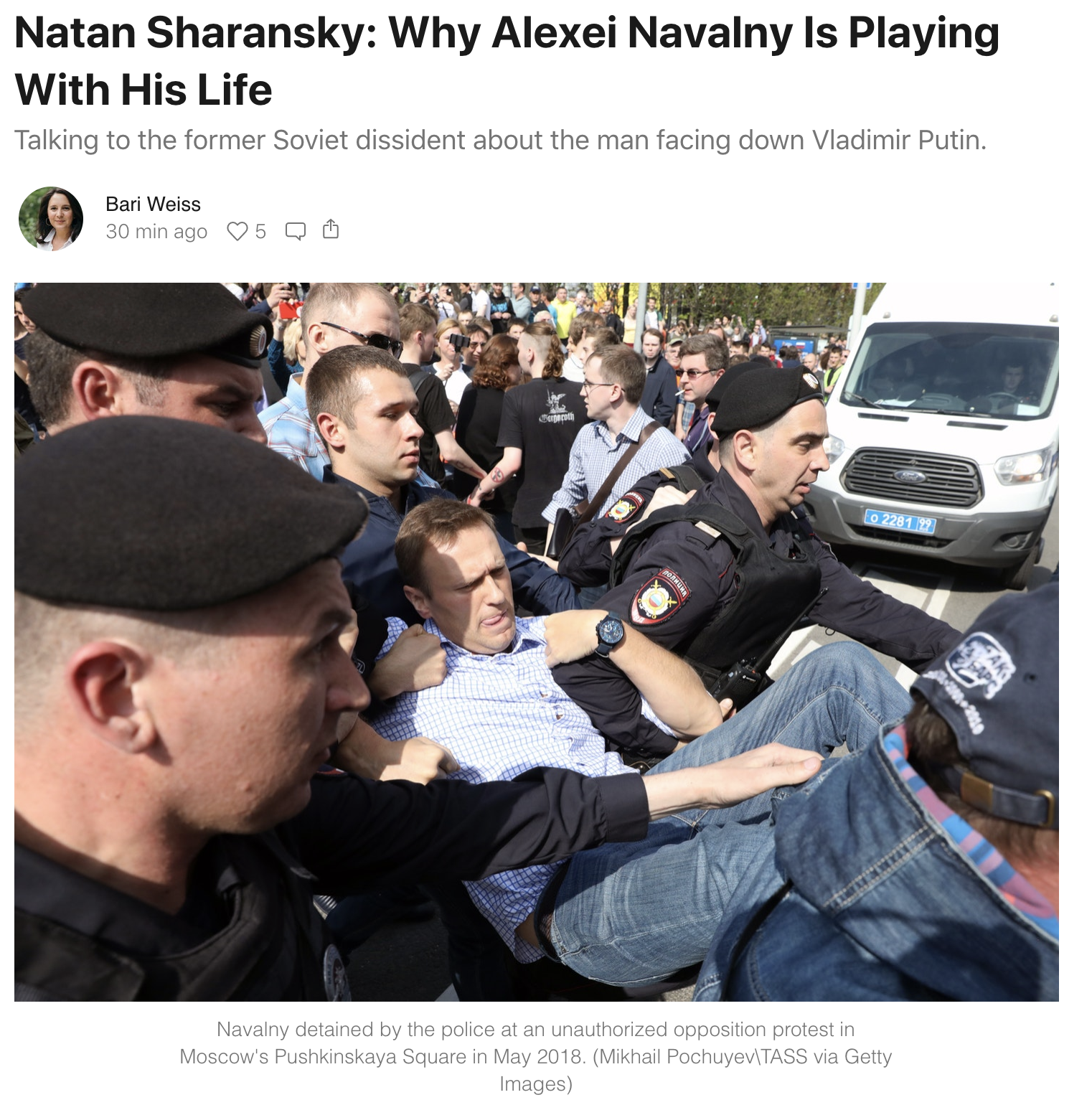 I’ll reproduce just two questions by Weiss and Sharansky’s answers, which I found enlightening but (at least for the first question) a bit baffling:

One of the things that reminds me of you when I watch Navalny is his sense of humor. You never lost yours, and it seems he hasn’t lost his. For a normal person watching him it’s impossible not to wonder: How can you be funny in a situation like this? When you are facing a matter of life and death?

On Hebrew radio they asked me: Isn’t he a stupid man to go to back Russia?

If your aim in life is to live a little bit longer, to guarantee that you are safe, then of course it’s very stupid. But if the aim of your life is to unmask the real face of this regime and you are ready to fight it — even risk your life to fight it — then it is a brilliant move.

You have to understand, then, when you are leading such a struggle over death and life, it is like you are part of a world drama. If you only take it seriously, you’ll become frightened to death. You’ll have no strength to continue.

What is the power of a sense of humor? It helps you to distance yourself from it, to look at it from the side, even to enjoy it.

I remember when I overcame the fear of the first interrogation, when they explained to me that I’ll be sentenced to death. And I understood that the goal wasn’t to make my life longer but to remain a free person. Then it became much easier.

What does it mean to be a free person? That you can make fun of all of it. You’re producing a spectacle. I think Navalny also feels like he is making a big performance. All the world is his stage and he is playing it. He is playing with his life.

I can’t quite get inside a mentality that requires looking at a situation with humor when it’s a deadly serious matter. Yes, it’s salubrious to have perspective and a sense of humor, but I, at least, would have trouble doing this while in a position like Navalny’s. And many people in such a position aren’t known for their humor.

Most people would say: You know, I’ve just been poisoned, I’ll live the rest of my life in exile. Help us get into the head of someone like Navalny. From where does a person like that summon his courage?

Sorry for the immodesty, but I’ll give you an example from my own life. Three years before I was released — and of course I didn’t know if it would be three years or 30 years — the Americans reached what they believed was a very good deal with Russia. They said: We’ll release Sharansky if he asks to be released on humanitarian grounds, because of his poor health from the hunger strikes and so on.

Why? Because this was a global struggle. The struggle was to unmask the real nature of this regime. The moment that they are perceived as caring about humanitarianism, you lose.

It’s not a struggle of how to get out of prison. The struggle is how to defeat them. It’s a moral struggle.

I’m sure, already long ago for Navalny, that his is not a struggle for his physical life. His address is all of Russia and the rest of the world. If he were to remain in exile, he would be one more respectable person in exile, writing his articles and so on. He can keep explaining the regime like I can do now to you over the phone. But he was put by history in this place to mobilize the Russian people and to reveal the nature of the Putin regime to the world.

This I can comprehend, but wouldn’t be able to do it myself. I’ve always had problems with sacrificing one’s life for a cause, as you’re not around to see the results. Yet I immensely admire most of those who do it—people like Nelson Mandela, who did see the results. (Not so much the lion-ingested Christians, who sacrificed their life for a fiction. They were brave, but still . . . )

If you want to watch an hourlong conversation with Rod Dreher, Weiss, and Sharansky, moderated by Tablet’s Liel Leibovitz, the video is below: