I’ve noticed lately that the quality of science writing in newspapers has declined, even in The New York Times, which used to have some really good writing, especially by Carl Zimmer, who doesn’t seem to appear in its pages so often.

CORRECTION:  Zimmer is still writing prolifically in the NYT, but covering a beat—vaccination—that I’d missed, (mis)leading me to believe that he was engaged in activities other than writing for the NYT. He’s asked me to correct this in a comment below, so I’ll just add his comment here:

If you had bothered to look at my author page at the Times, you’d see that I have been busier than ever there as I help cover the science of the pandemic. Over the past 10 months, I’ve written 93 stories about Covid-19, which comes to about two articles a week. Please correct your post. You are misleading your readers about my work. https://www.nytimes.com/by/carl-zimmer

I guess he was peeved. The misstatement was my fault, of course, and I’ve fixed it, but I have to say that this is a rather splenetic reply from someone whose work I’ve always praised.

Rather, in place of long-form biology and physics, a variety of people now write for the Times‘s biological “Trilobite” column, and seem to take a more gee-whiz approach to science, producing short columns that are also short on information.

Part of the problem may be that many of these columns are written by freelancers who haven’t spent most of their writing career dealing with biology. My general impression is that the NYT is starting to reduce its coverage of science. That would be a damn shame since it was the only major paper to have a full science section (I don’t get the paper issues any longer, so I don’t know if they still have the Tuesday science section I’d read first).

The sloppy writing seems to be the case with this week’s column, a column reporting a new genome-sequencing study in Nature of monotremes: the platypus and the echidna (“spiny anteater”). I have only scanned the paper briefly, and will read it thoroughly, but on reading the NYT’s short summary I spotted two errors—not outright misstatements of fact, but statements that are incomplete descriptions of the truth, and where an extra word or two would have made the column not only more accurate, but more interesting. 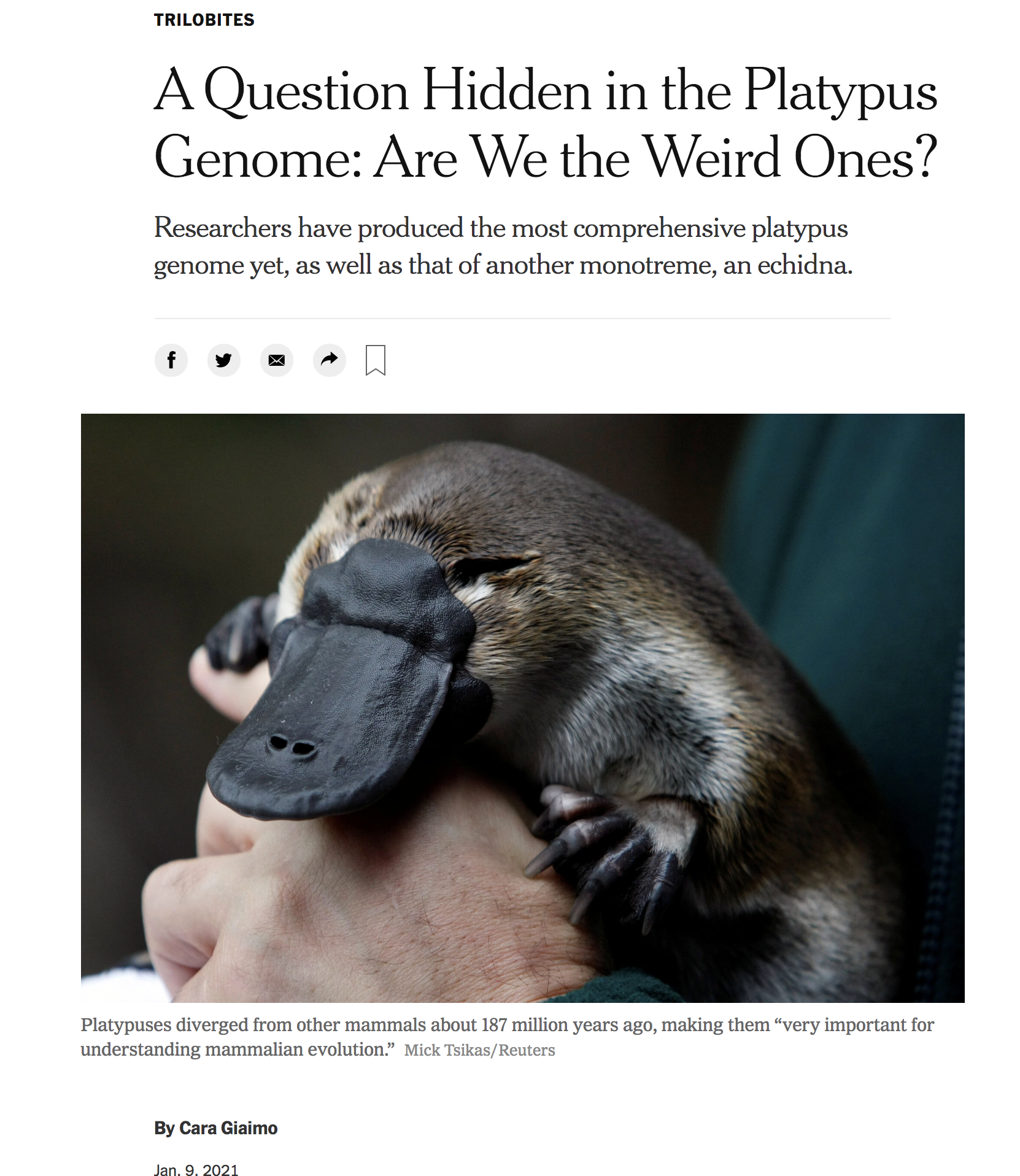 Maybe I’m being petulant, but here are two quasi-misstatements in the piece. First, this one (emphases are mine):

When the British zoologist George Shaw first encountered a platypus specimen in 1799, he was so befuddled that he checked for stitches, thinking someone might be trying to trick him with a Frankencreature. It’s hard to blame him: What other animal has a rubbery bill, ankle spikes full of venom, luxurious fur that glows under black light and a tendency to lay eggs?

The facts: Only the males have ankle spurs, and of course only the males have venom. (This probably shows that the trait is used not for defense against predators, but for male-male competition during mating.) Females have no venom and have rudimentary spur nubs that drop off before maturing. Of course, females have the genes for producing ankle spurs and venom, as those genes don’t know which sex they’ll wind up in—just like human males have genes for vaginas and breasts and human females carry genes for penises. But the sex-development pathway prevents the expression of venom and spurs in females, just as it prevented me from developing a vagina.

The sex-limitation of the spurs isn’t mentioned in the Nature piece, but every biologist who knows their platypuses also knows that only the males have venom spurs. And, by the way, the echidna has some genes that used to produce venom, but they’re non-expressed “pseudogenes” that have become inactivated. That shows that the ancestral monotreme was almost certainly venomous (this isn’t mentioned in the NYT piece, either).

About those egg-yolk genes:

For instance, many birds and insects have multiple copies of a gene called vitellogenin, which is involved in the production of egg yolks.

Most mammals don’t have the vitellogenin gene, said Dr. Zhang. But the new genomes reveal that platypuses and echidnas have one copy of it, helping to explain their anomalous egg-laying — and suggesting that this gene (and perhaps the reproductive strategy itself) may have been something the rest of us lost, rather than an innovation of the monotremes.

Well, yes, mammals do have the vitellogenin gene. In fact, our own species has three of them, but, as in other mammals they’re pseudogenes—genes that are there in the genome but are broken and not expressed. Humans and other placental mammals don’t require egg yolk because we’re nourished through the placenta, not yolks in shells. The platypus has two vitellogenin genes (described in the Nature paper as “genes”, so the statement that platypuses and echnidas have “one copy” is misleading)—they’re just not “functional” genes.

Now you may say this is quibbling, but it’s not. First of all, the statement that playtpuses have one copy of the egg yolk gene is wrong. They have two, but one doesn’t function. More important, the statement that there are nonfunctional yolk genes in all mammals says something powerful about evolution, something that I discuss in my book Why Evolution is True.  Those “vestigial” and nonfunctional genes are evolutionary remnants of our ancestors who did produce egg yolk. Why else would they be there in our genome, doing nothing? Chickens, who of course evolved from reptiles, as we did, have all three vitellogenin genes in working order.

Another error, then, is the statement “suggesting that this genes. . . may have been something the rest of us lost.” No, we didn’t lose it; it’s still there in our genomes. And there’s no “suggestion” about it: it’s sitting there in our DNA, has been sequenced, and has been shown to be nonfunctional. Finally, we KNOW that this gene is NOT an innovation of the monotremes, and have known that for a long time (e.g., see here). It was inherited from their reptilian ancestors.

This isn’t flat out erroneous science reporting, but it’s incomplete science reporting—the summary of a paper phoned in to the NYT. (I also find the Time’s summary curiously devoid of what’s really new in the paper; at least half of it reprises what we already knew.) More important, the reporter missed a good chance to give some powerful evidence for evolution, both in ourselves and in monotremes, whose genomes harbor some dead egg-yolk genes that are active in our avian and reptilian relatives. And yes, those echidnas have dead genes for venom.

34 thoughts on “Shabby science reporting in the New York Times”