A story from the Daily Star (click on screenshot) tells the story of a stray orange tabby, now named Bruce Willis, who was rescued and now is a happy cat.

Here’s the poor moggy right when he was taken in: 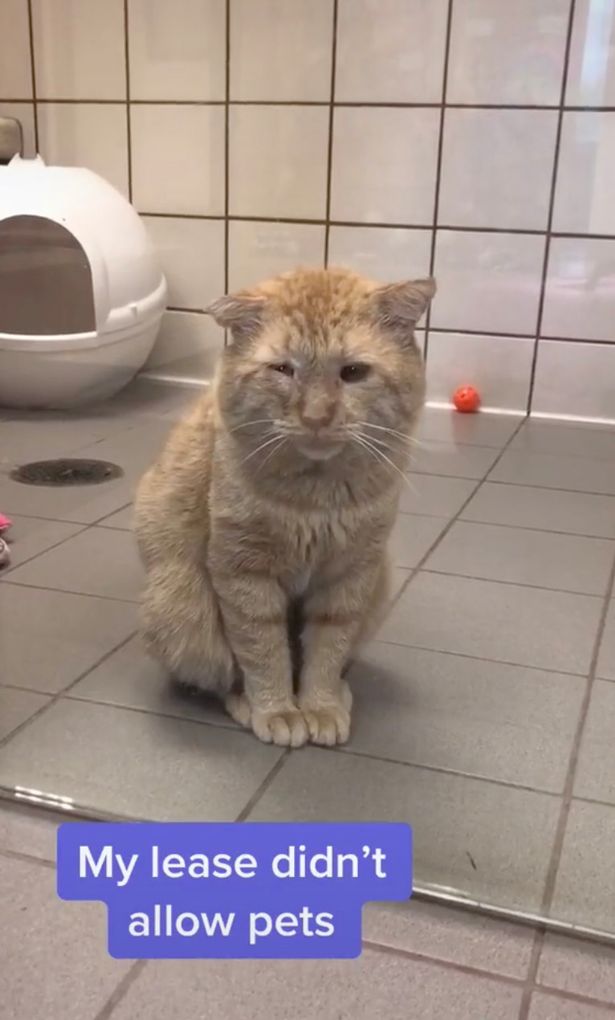 A stray cat that sported a permanently sad look has been transformed a year after he was adopted.

Bruce Willis, the orange tabby, had scars from fights with other cats and problems with his immune system when he was taken into Animal Humane Society in Minnesota, US.

His healed eye was a little droopy, his one ear was a little cockeyed, and his scars left his fur looking a little bedraggled.

But luckily he was rescued by cat lover Sandra, who persuaded her landlord to make an exemption for the apartment’s no-pet policy.

The six-year-old cat was taken to Sandra’s home last August and started a new life as a loving pet.

And. . . here he is now, completely transformed! 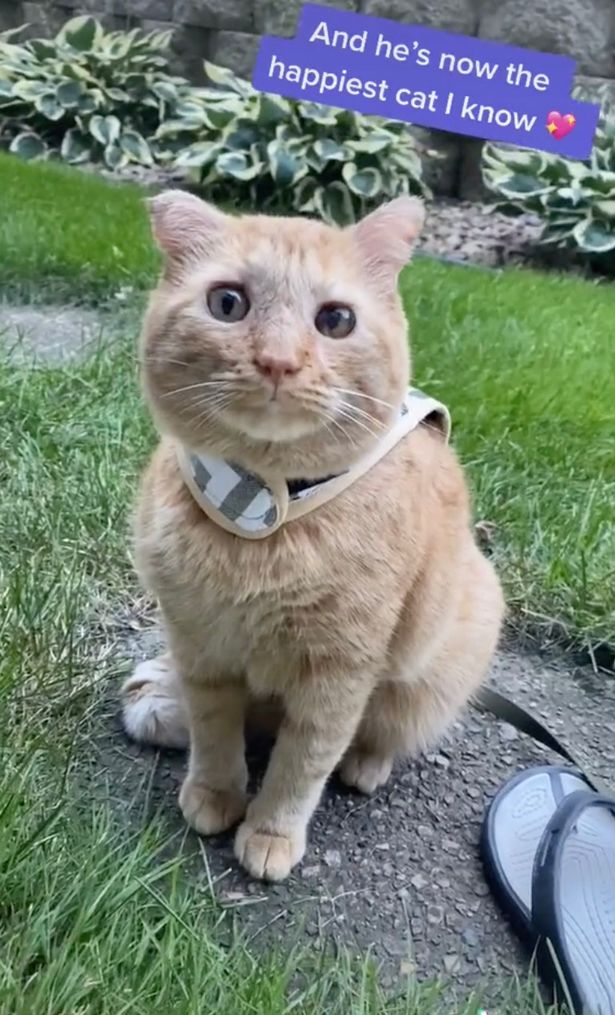 Bruce Willis has his own Tik Tok page, which the article explains:

Video shared by Sandra on her TikTok @mrwillisthecat documents Bruce’s changes in the past year after she explained he was the “saddest cat” she had ever seen.

In the montage clip, the moggie enjoys a little rub on his belly and likes to sleep by Sandra’s feet.

As Bruce slowly adapts to the new place, he becomes more active.

In one clip, he is seen dragging a catnip toy across the room and going out for a walk in the snow in his military green vest.

Here’s another good one (warning: there are a gazillion videos of the cat on that page, but that just shows that his staff loves him).

And from Jezebel, we have an article about a diffident cat named Prince. He’s a lovely gray English shorthair, and his staff dotes on him, but the cat, well, he’s a cat. . . 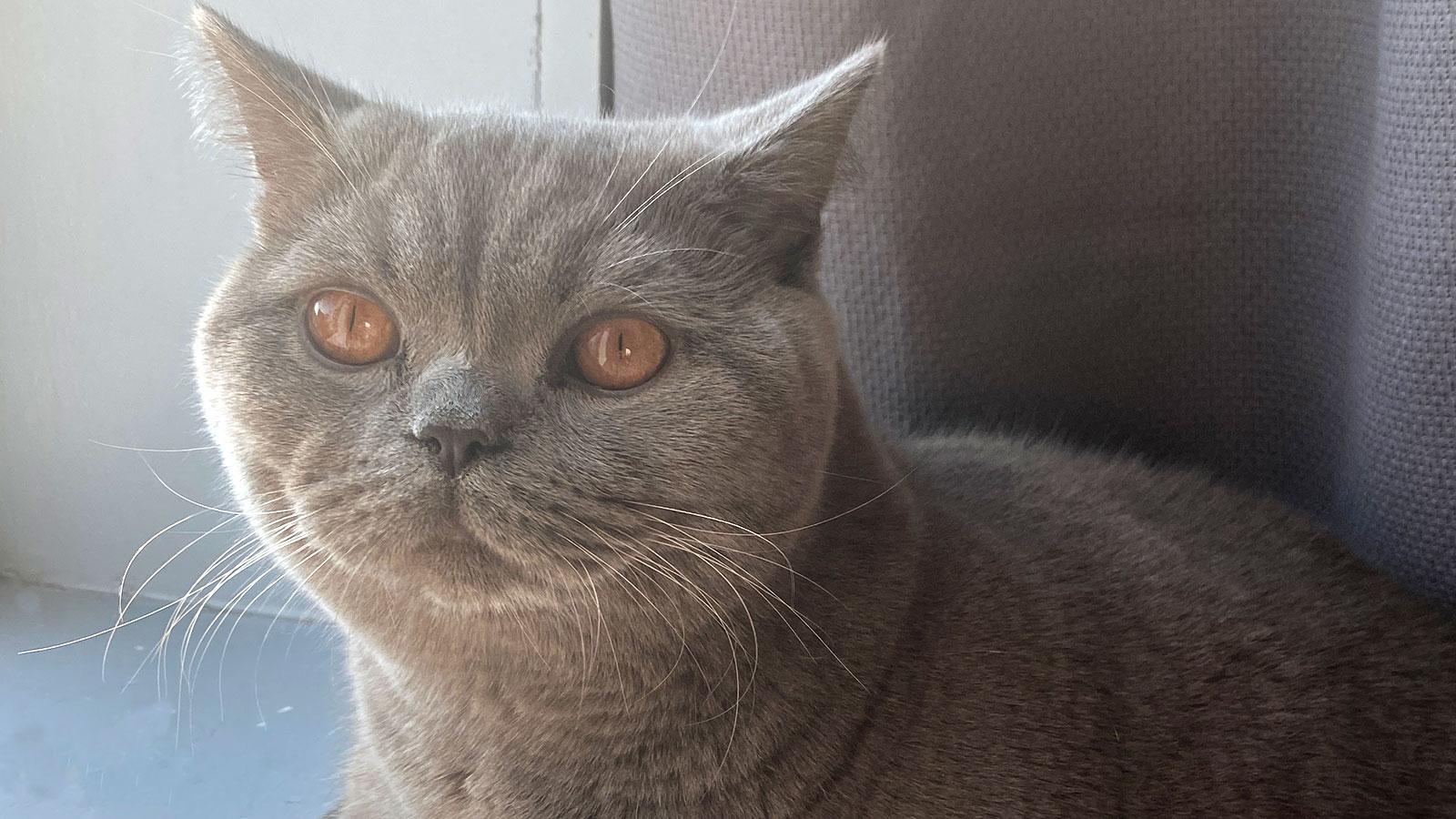 Reciprocated unconditional love is cool, but have you ever devoted your life to pleasing an animal that would step on your dead face, if not consume it? Prince wouldn’t piss on me if I were on fire or puke a hairball at me if I were bald, and yet this little cat has me wrapped around his furry cankle. At a certain point during the raising of anything—from children to chickens—many wonder, “Am I creating a monster?” I don’t really have to ask.

Luckily the monster I’ve been creating since his late-January adoption is clumsy on his feet, prone to distraction, rarely inclined to bare his claws, and unable to follow through with the tasks he assigns himself. (I’ve seen him kill bugs, but he seems to get bored when they stop moving and so he doesn’t eat them). He’s a harmless monster, really, and more importantly, he’s my monster to deal with. 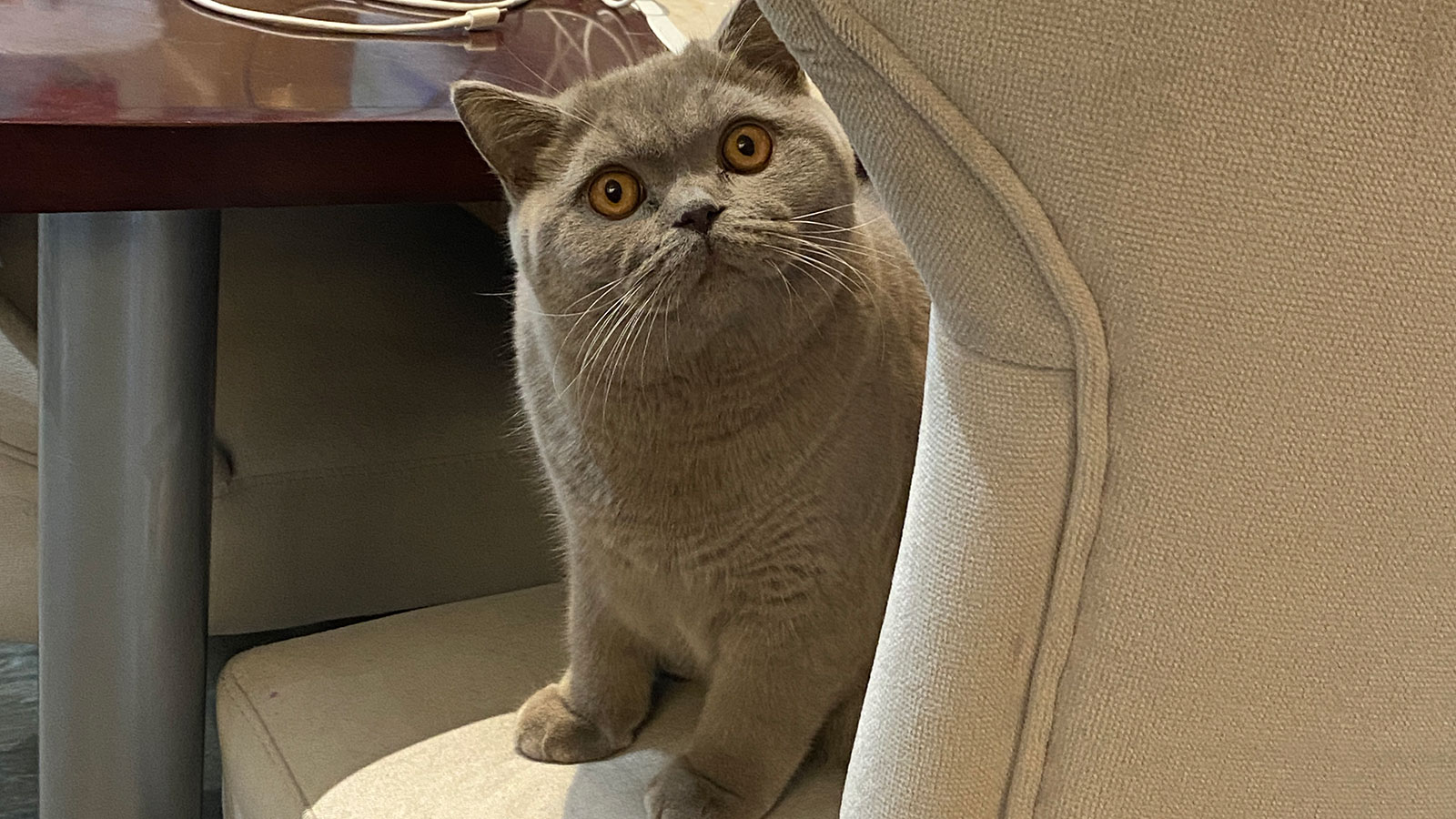 I’m sure it’s just that apathy is his guiding principle, but Prince has an uncanny way of giving just enough to leave me wanting more. It’s in the bites that I wish were kisses, the glares that I generously interpret as interest, the tricks he performs to get me off his back and food in his belly. While out walking the other day, I saw a woman in a blue denim baseball hat and neon green shirt with the name of a timeshare agency printed on its back, scoop up a sand-colored dog (maybe a Pekingese), hold the pup to her chest and kiss the side of its head. The dog accepted affection without a shred of resistance and I was jealous. When I got home, Prince was staring into space and I asked him if he wanted to hang out. As if on cue, as soon as I stopped talking, he winced a slow wince that started with his left eye and spread to his right. I laughed and wanted to hug him, but out of respect for his space and individuality, I declined.

And from Bored Panda we have a series of photos of cats who, like Hili, love to act like birds. Click on screenshot, and I’ll put a few pictures below:

There’s also some explanation from an expert (more below):

Bored Panda wanted to learn more about why cats enjoy climbing trees so much and why they tend to get stuck in treetops, so we reached out to cat behaviorist Ingrid Johnson. 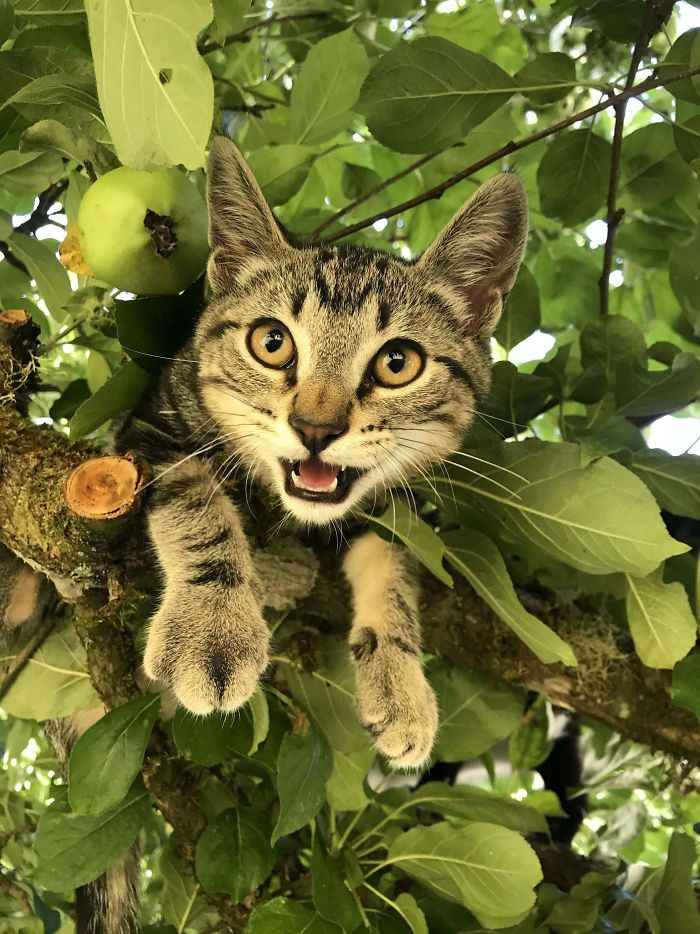 According to cat behaviorist Ingrid, cats seek height for a lot of different reasons. What’s more, for an outdoor cat or an indoor-outdoor cat, those reasons could even save their life. “Height provides comfort and security and the ability to survey a lot of territory from a single vantage point. Climbing a tree or a cat condo for our indoor only friends provides a sense of safety,” she explained.

“Height also creates more usable territory and allows cats to avoid conflict with other cats. So an outdoor cat may climb a tree to escape an attacker (a rival neighborhood cat or a dog!), the same reason an indoor cat might bolt up a cat

Cats are built for climbing. Lots of climbing. They have powerful hind legs and strong backs, so it’s no surprise that when they see a tree, they’ll instinctively want to go as high up as they can.

What’s more, there are certain advantages to perching in a tree. When you’re higher up, you can spot your dinner from much further away while they remain unaware. (Let’s keep that in mind the next time we want to ambush an ice cream truck.)

However, climbing up trees isn’t just an offensive move; it can be a defensive tactic, too! Cats aren’t at the top of the food chain, so they can fall victim to other wild animals or the neighborhood doggos. Being up high means cats feel safer, more relaxed, and can taunt their would-be predators as much as they like. Unless their pursuers can climb trees, too! 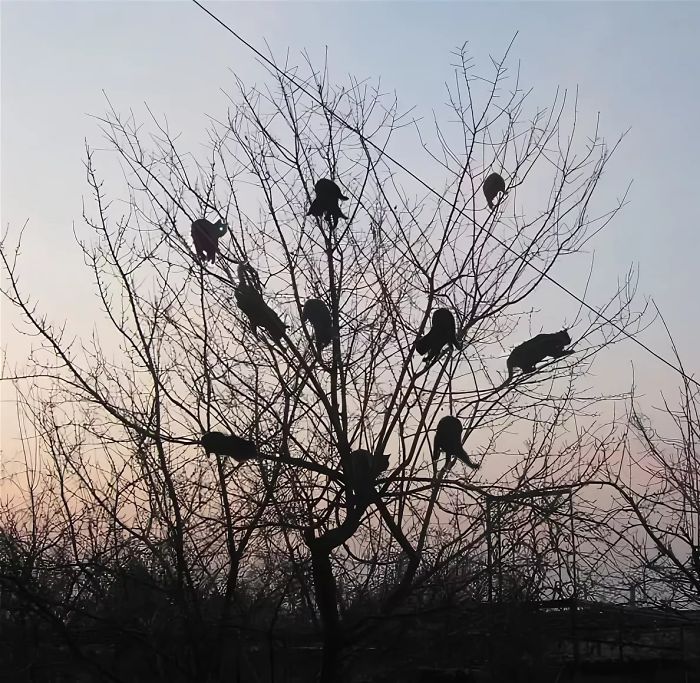 Ah, but here’s the rub: there’s an ad for Johnson’s climbing pole:

Cats can also chase their prey, like a squirrel, chipmunk, or a bird, up a tree. But cats also climb to hang out, to take a nap, and for fun! “They condition their claws and muscles by scratching and climbing. We call these ‘feel good’ behaviors. In fact, many indoor cats never get a chance to condition/hone their back claws because few cat condo companies provide a straight vertical pole to climb.”

She continued: “Which is exactly why my husband, Jake and I provide the market with a six foot, wall mounted scratch pole. There are virtually none on the market, we have multiples of these in our home and our cats climb them regularly. It is a great way to mimic a tree for an indoor cat. Just always be sure to provide a way for them to get down.”

Ingrid confirmed to Bored Panda that cats have a lot more trouble climbing out of trees than up them. 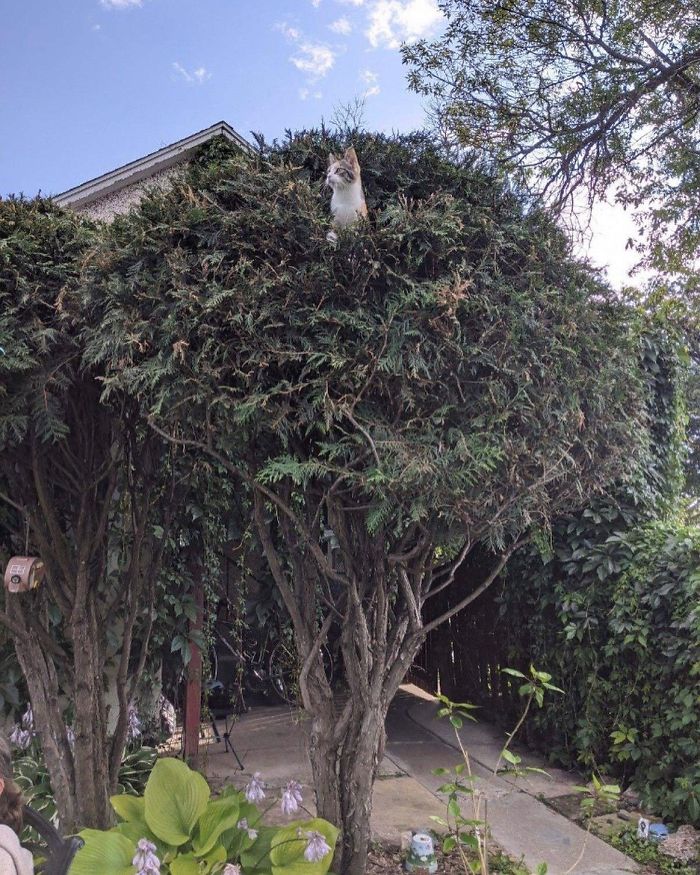 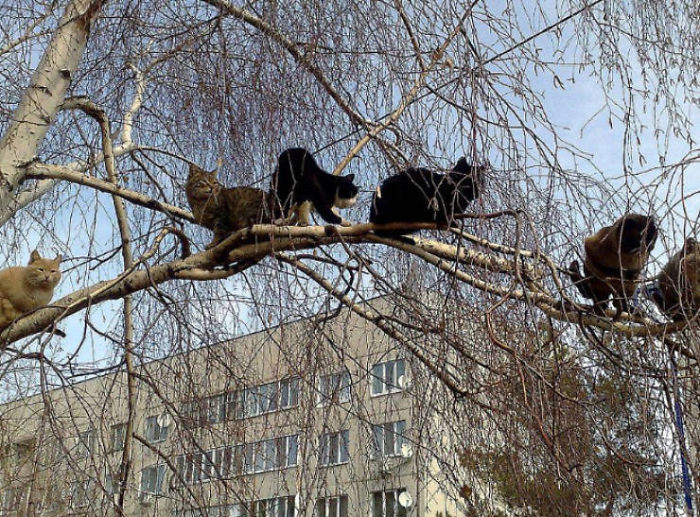 7 thoughts on “Caturday felid trifecta: World’s saddest cat adopted; the tale of a diffident cat; cats that act like birds”