We’ve heard often lately that colleges are afflicted with “structural racism”, and that every white person carries a degree of racism—of “implicit” bias—that is not even accessible to consciousness. These claims, at least those about the deep racism of American colleges, are never accompanied by systematic data, only by anecdotes. Are those claims true? A new paper in the Journal of Experimental Psychology: General from the University of Wisconsin at Madison (UWM, reference at bottom) suggest that they aren’t, at least on that campus.

The authors of the paper, also at UWM, tested predictions from two contrasting theories of bias on college campuses. One, the “dispersed discrimination account”, posits that bias is widespread, with most individuals holding biases against groups like women, blacks and Muslims. This is implicit in the anti-racism work of people like Robin DiAngelo, who accepts that everybody has “implicit or unconscious biases” that cannot be escaped.

The other is the “concentrated discrimination account”, holding that most discriminatory behaviors are practiced by a minority of people.

The two theories predict different distributions of both attitudes and behaviors, and the authors tested both of these in a series of studies. According to the authors, the data are more consistent with the “concentrated” discrimination account: students from marginalized groups reported that in general they felt welcome and that most of the discrimination they experienced came from only a small fraction of their peers. Further, observations of student behavior showed a general absence of discrimination in staged social interactions.

You can read the results if you go to ResearchGate or download a preprint from PsyArXiv. Or a judicious inquiry might yield a pdf. Since the results are long and complicated, you might want to read the paper for yourself. You can get the preprint by clicking on the screenshot below.

Before and after they describe their research, Campbell and Brauer go into great detail explaining why their results don’t show that there is no bias on campus, that minority accounts of discrimination can’t be believed, and argue that diversity initiatives on campus must continue (though, they conclude, in a different form). One gets the feeling from the fact that they make these arguments twice, and at length, that they’re trying to avoid being criticized for saying that there’s no racial, gender, or sexuality biases on campus. True, the potential for outrage by those who haven’t read the paper is great, but the authors’ caveats d get a bit tedious. But let’s be clear: they are not denying cognitive or behavioral bias, but only saying that it’s not in everyone, being limited to a smallish (20% or less) proportion of students.

The study came from 2016, and involved various numbers of students on various kinds of tests, ranging from a few dozen in the behavioral tests to over 7,000 in the surveys of campus climate. I’ll try to summarize the results briefly.

a.) Implicit Association Tests. (These tests of unconscious bias have been largely criticized as flawed, but the authors use the data anyway.) The tests of college students at UWM showed that on Black/White tests students show a moderate bis towards whites, about in line with the general American population.

b.) Campus Climate Survey. Besides whites, the surveyed students included African-American, American Indian, Alaska Native, Pacific Islander, Asian, Chicano, and Hispanic students. Students were asked about whether the campus had a welcoming environment, was committed to diversity, had students’ questions respected, and about the degree to which ethnic minority and white students were treated with respect. While there were the expected differences among groups, they were surprisingly small: “students of color report a relatively positive experience on campus, though not as positive as that of their White peers.” (I urge you to consult the paper to see the data.) The authors feel that “the fact that [students of color] generally report feeling quite welcomes and disrespected is inconsistent with the account that discrimination is perpetrated by the majority of individuals with whom they interact.”

c.) Peer Perceptions. This survey also included nonbinary, transsexual, and LGBTQ students as well as students of color. Students were asked to apportion the student body, by percentage, into six groups, as indicated in the caption to the figure below, ranging from very negative attitudes toward members of other groups and engage in explicit discrimination (darkest shade) to students who have positive attitudes towards members of other groups and behave very inclusively (lightest color). (“Neutral” includes those with “middle of the road attitudes” and who don’t behave inclusively but also don’t discriminate.)

As you see, the perceptions are strikingly similar across groups. Further, more than 94.7% of students in each of the three groups below reported that “a numerical minority of their peers are responsible for the discrimination on campus. 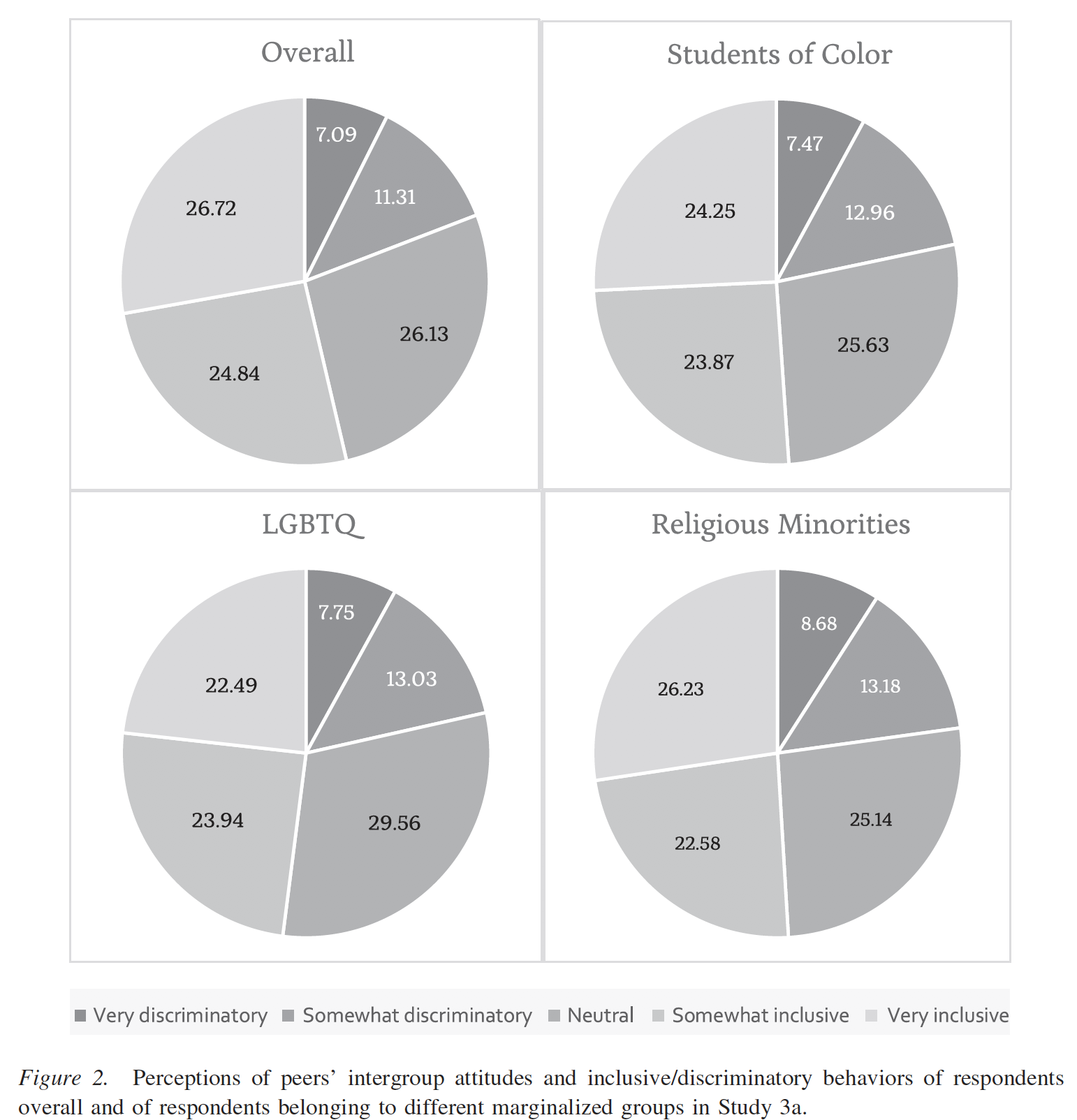 d.) Behavior:  The experimenters enlisted participants and observers to interact with “innocent” targets to see if the targets behaved differently if they encountered a member of a minority group compared to a white person. There were several of these studies, involving the behaviors of holding open doors for others, asking directions and asking the answerer to walk with you toward a destination, helping pick up dropped flash cards in an elevator, and sitting next to someone on a bus. (There was also an experiment in which students of different ethnicities—Muslim, black, and white—applied for student jobs by submitting their resumés.)

The results were pretty uniform; almost none of the differences seen approached statistical significance, giving little evidence of discrimination in a smaller sample ranging from a few dozen to over 150.

e.) Meta-analysis: Although the behavioral studies yielded differences that weren’t statistically significant, when the five behavioral tests were subject to a meta-analysis one did see a significant difference. When this analysis used only studies including individuals that could easily be identified as members of marginalized groups—black and Muslims (the latter were hijab-wearing women)—a highly significant effect was found (p = 0.004) indicating some overall discrimination among the studies. The authors, however, say that the effect is small, which, they argue, means that “the results are rather inconsistent with the dispersed discrimination account, which would predict a much more substantial difference in treatment.”

Now I’m not sure how much of a difference would substantiate the dispersed discrimination account; the authors don’t say, and one gets the feeling that they’re shoehorning the data into their preferred hypothesis. However, the differences in each test were nonsignificant (though often in the direction of bias), so there was clearly not a large individual effect in each test.

THE UPSHOT: Although there are problems with the analysis, not the least that it was conducted at only one university, although a very large one, and although the authors do take care to point out a list of potential problems at the end, the amount of discrimination evinced in both attitudes and behaviors was smaller than I expected, and, I suppose, smaller than asserted by people like Robin DiAngelo and other exponents of the implicit bias hypothesis. One can assert that answering questions about attitudes towards other students is not a good way to assess real feelings (nobody wants to admit they’re biased, even anonymously), but this can’t hold for the behavioral experiments, which also showed a surprising lack of bias. And, of course, it’s in behavior where racism and bigotry plays out.

The authors argue that their study has implications for how to deal with bias in colleges. For one thing, if you tell everyone they’re bigoted when only a minority of them are, this may be counterproductive, as some data show that such confrontational messages may make people behave and feel in a more discriminatory manner. Thus, the authors are against general “antiracist” training required for everyone, and urge colleges to concentrate on the minority of students who really do show discriminatory behavior. In other words, they don’t feel that targeting campuses with messages about structural and implicit racism is the way to go.  They favor instead a way to “target individuals with neither positive nor negative outgroup attitudes and to provide them with tools and psychological incentives to engage in a larger number of inclusive behaviors.”

I haven’t seen how this new study has been received, but of course those invested in implicit racism will find ways to discredit it. But, as I’ve always said, if you claim that there is implicit, widespread racism on campuses, you can’t just assert it—you have to provide data. The data in this new paper don’t support that kind of assertion.

27 thoughts on “New study shows that campus bigotry is concentrated in only a minority of students, rebutting the “dispersed discrimination” hypothesis of “implicit bias” theory”