Forty-four public schools in San Francisco have been advised that their names are polluted by association with slavery, colonization, oppression, genocide, abuse, or homophobia, and are likely to have their names changed late this year. This, of course, is part of the nationwide frenzy of renaming anything named after someone who offends the Woke. Now perhaps some renaming might be in order, but in this case the names scheduled for erasure include those of Abraham Lincoln, Roosevelt (not sure whether Teddy or FDR), James Monroe, Herbert Hoover, George Washington and even Dianne Feinstein (one of California’s progressive Senators), for crying out loud.  I’ll give some of the rationales for renaming below.

The whole story appears in the San Francisco Chronicle, which you can access by clicking on the screenshot below. If you’re paywalled, judicious inquiries might yield you a copy. 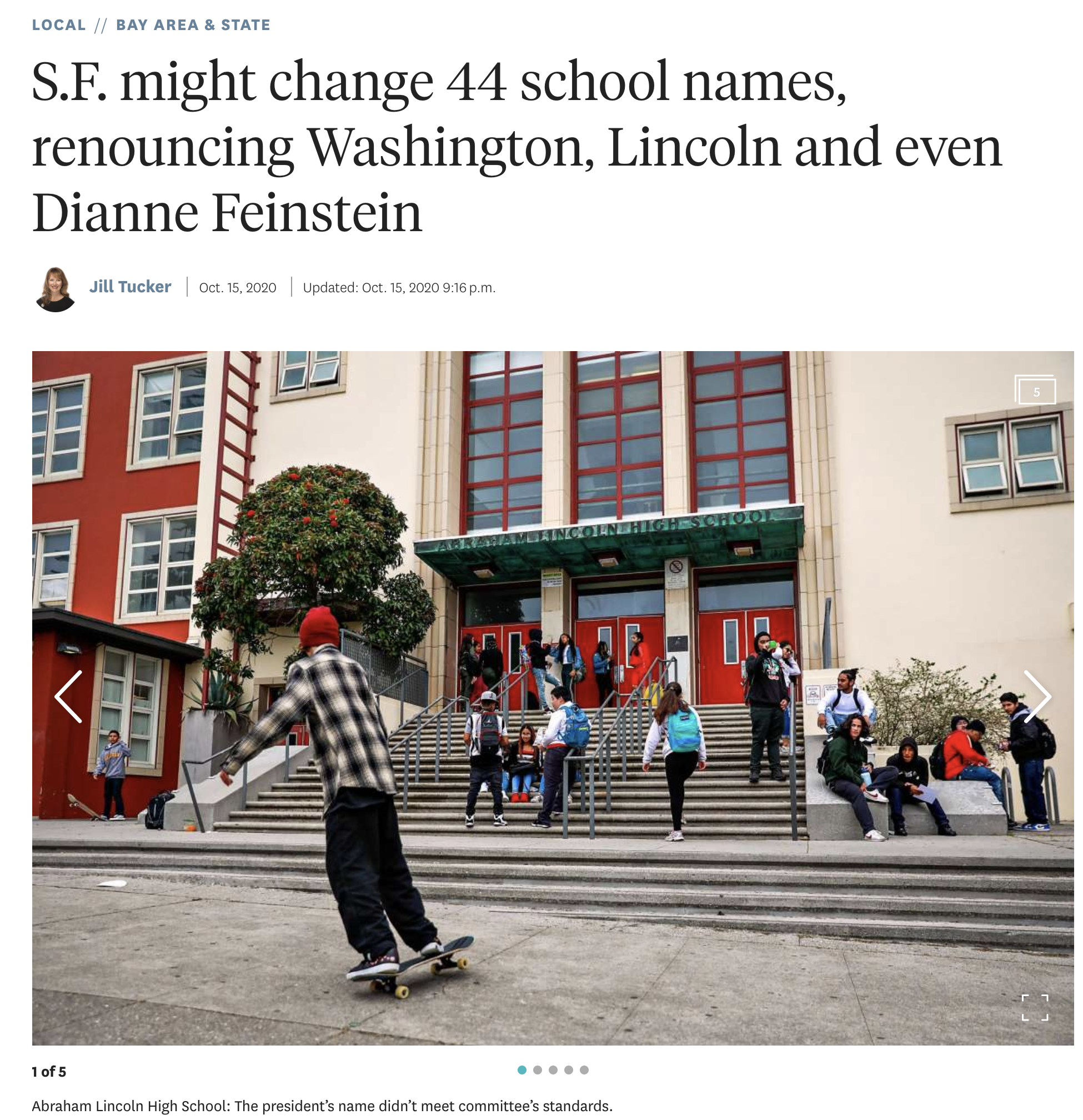 The S.F. school board has been pondering name changes for a while, and the superintendent appointed 12 “community members” to a committee to decide which names had to go (the committee also includes the school board president and district staff members. They started their work in January, and the afflicted schools were just informed that they had to provide a list of alternative school names by December 18. The changes—and I’m betting all will be made—will occur in January or February. The schools will probably be closed then, as they are now due to the pandemic.

The cost? Well, they have to change the signs the stationary, and other stuff, so estimates are that for each school the costs will be in the “tens of thousands of dollars”, so the total cost could run over half a million dollars. But that’s cheap to fix racism and oppression, right?

How the committee members did their research. (All quotes are indented.)

[The committee] was formed in January and has since met 10 times, with members doing their own research, looking at newspaper articles, among other resources to identify whether the name on a school met the criteria for renaming. . . .

“We need an inclusive process that will allow all communities to be heard, use professional historians applying verifiable data, issue a written report why a school name might be changed, so the community can make a considered decision,” said the alumni association presidents from Balboa, Galileo, Lincoln, Lowell and Washington high schools in a letter to district officials last week.

The criteria for renaming:

The San Francisco School Names Advisory Committee researched school names and identified them for renaming if they met any of the following criteria:

Anyone directly involved in the colonization of people.
Slave owners or participants in enslavement.
Perpetrators of genocide or slavery.
Those who exploit workers/people.
Those who directly oppressed or abused women, children, queer or transgender people.
Those connected to any human rights or environmental abuses.
Those who are known racists and/or white supremacists and/or espoused racist beliefs.

Criteria like “involvement in colonization” or “connected to human rights or environmental abuses” or “exploitation of workers/people” are literally begging for application, and indeed, the list of miscreants whose names will be replaced include the following (I’ll give the reasons if they’re in the article). And, of course, there’s no consideration that morality has changed over time, so we’re judging many people on the list below by standards that weren’t in force when they lived.

But one person who wasn’t erased: Thomas Edison was almost cut because he supposedly euthanized Topsy the Elephant to test the power of electrocution. Granted, that was a horrible thing to do, but in fact there’s no clear connection between Edison and the inhumane execution. At least they caught that one.

Abraham Lincoln High is also on the list, based on the former president’s treatment of American Indian and native peoples.

El Dorado Elementary came up next for discussion, with board members questioning whether the criteria should apply to a mythological place associated with settlers or colonists.

“The concept of El Dorado, especially in California, had a lot to do with the search of gold, and for the indigenous people that meant the death of them,” said Mary Travis Allen during a September panel meeting. “I don’t think the concept of greed and lust for gold is a concept we want our children to be given.”

While some on the panel questioned whether an imaginary place filled with gold met the criteria for renaming. [sic] “That’s how we justified Mission and Presidio, as places of human rights abuses or environmental abuses,” said Jeremiah Jeffries, saying it was similar to naming a school “Manifest Destiny.”

That work includes a recommendation to change the name of Dianne Feinstein Elementary, a name given by the Board of Education in 2006 when the new school opened.

The school made the list because, as mayor in 1986, Feinstein reportedly replaced a vandalized Confederate flag, one of several historic flags flying in front of City Hall at the time.

Muir has already been canceled by the Sierra Club for making derogatory remarks about black and indigenous people, Washington and Jefferson had slaves, and Monroe opposed the Missouri Compromise’s stipulation that some states be admitted to the Union without slaves. I’m not sure about Roosevelt (it’s probably Teddy), but we’ve seen the supposed (and misinterpreted) evidence of his colonialism before. As for Robert Luis Stevenson, Daniel Webster, Francis Scott Key, William McKinley, Robert Louis Stevenson, Herbert Hoover, and Paul Revere, I can’t be arsed to find out why they’re demonized.  But James R. Lowell appears to have been an abolitionist!

As for taking down Dianne Feinstein’s name because she restored a vandalized Confederate flag 34 years ago, that’s absurd—an insult. It’s the equivalent for penalizing an 18th century Brit for making one derogatory comment about colonized people. (Remember, the “stars and bars” weren’t nearly as demonized in 1986 as they are now.)

It looks as if no amount of good work can overcome something bad that someone did or said, even if it was trivial. But, according to my criterion of keeping a name if it honors someone’s good works, and those good works outweigh the bad, most of the names above should probably stay.

At any rate, the article does discuss some pushback by citizens, but, as we know, these initiatives are unstoppable. All you have to do is find some intimation on Wikipedia that someone said or did something oppressive at least once, and, poof, their names are off the school. It is a frenzy of wokeness, and of course will do absolutely nothing to improve humanity of the comity of different groups. This is what’s known as “performative wokeness”, and is just so much easier than giving minority students equal opportunity. But that, of course, would involve investing far more than the ten thousand dollars or so to simply change the name of a school.  It’s much easier on our pockets to just rename!