Evolutionary ecologist Bruce Lyon has returned with part II of his Cooper’s Hawk saga. His words are indented.

I am following up on a previous post (here) about the Cooper’s hawks (Accipiter cooperi) that nested near my house. I will start with the fledglings, obsessed with food but hopeless as hunters. I will then talk about the adults, lethal predators who share an interesting feature in common with a famous dinosaur—perhaps an indication of similar hunting behaviors?

Because the fledglings grew up in a busy parking lot, they showed little fear of people once they left the nest. They could not hunt yet and had lots of time to kill while waiting for an infrequent visit by a parent with food. The chicks often spent this time roaming the neighborhood, sitting on peoples’ roofs or hopping around the road, looking like predatory dinosaurs.

Below: A fledgling sits on the road. Right after I took this photo, two of the fledglings took turns swooping at squirrels. It looked like play or practice to me and they never made serious attempts to grab the squirrels. The squirrels seemed to recognize the lack of threat and appeared completely unconcerned—they moved slightly out of the way from the swooping chicks and then resumed foraging as soon as the hawks had passed. The squirrels’ lack of fear is a bit surprising because adult hawks catch a lot of squirrels—both ground and tree squirrels. I guess the squirrels are good at telling the killers from the klutzes. 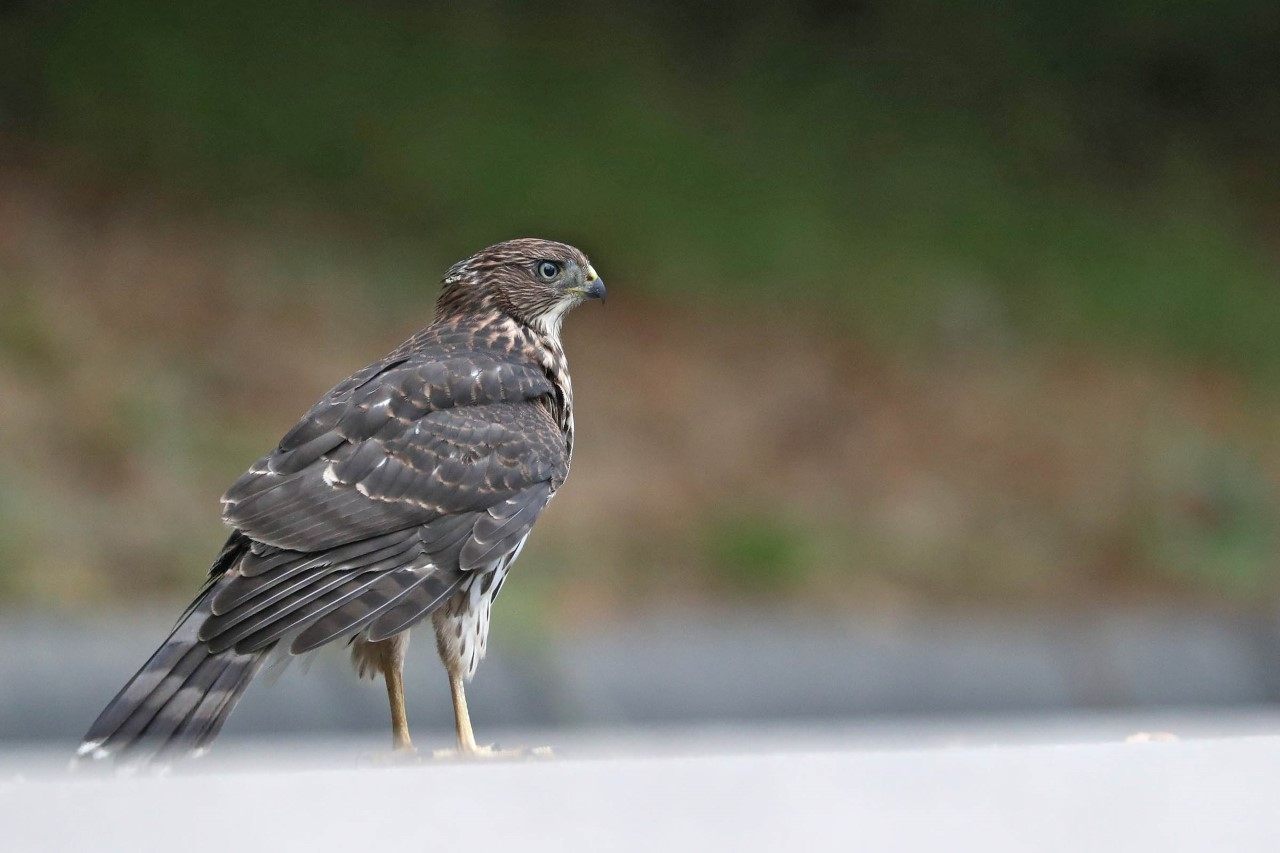 On one occasion, two of the fledglings were flying around my yard, chasing each other and making a racket. One had prey (a plucked bird) that I assume it had gotten from a parent and the other was chasing it, presumably to steal the prey (I have seen such theft a few times). Eventually, both flew into an ornamental grove of redwoods and perched low. The bird with the prey item draped its wings around the prey to defend against theft—called mantling—while the second chick perched four feet away screaming its head off.

Below: the fledgling with the prey mantles the prey: 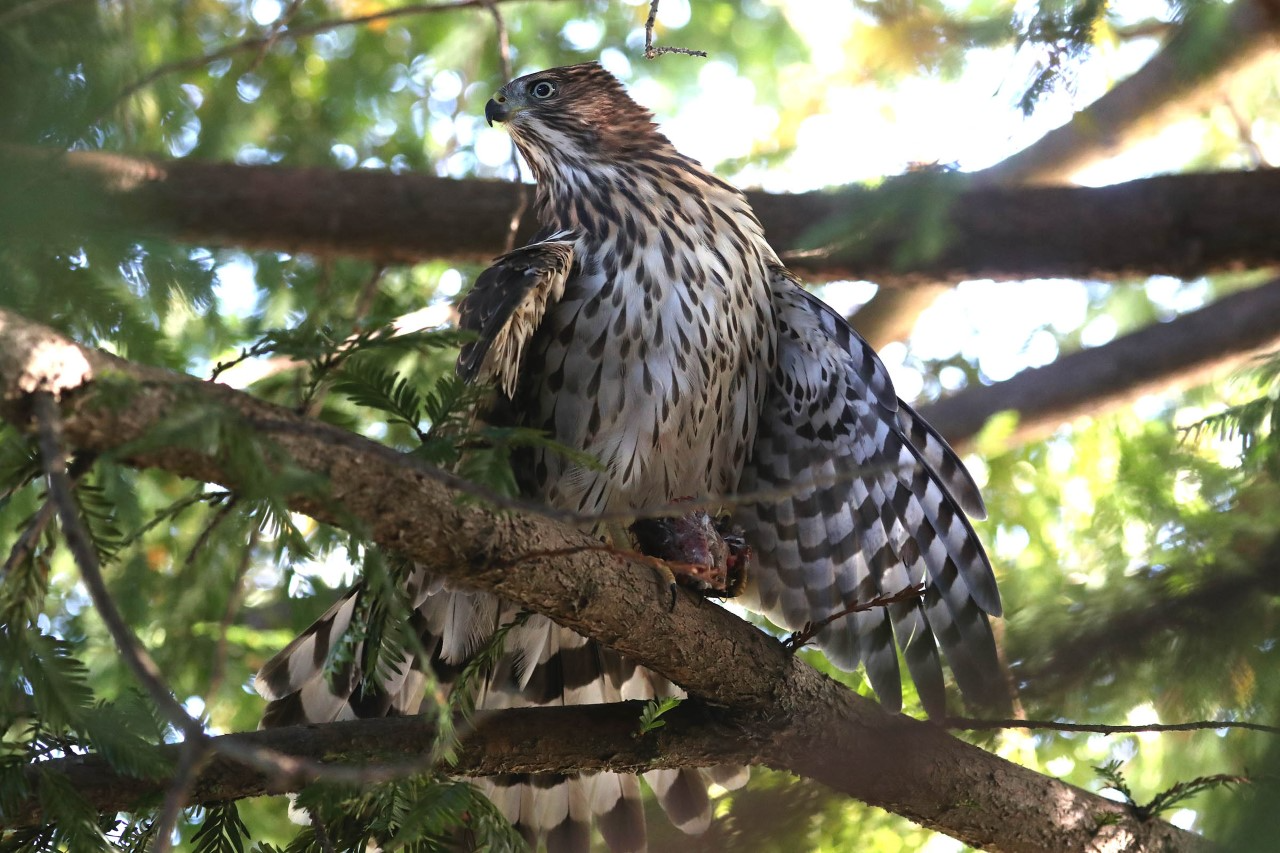 Below: the other chick whines about not having the food. 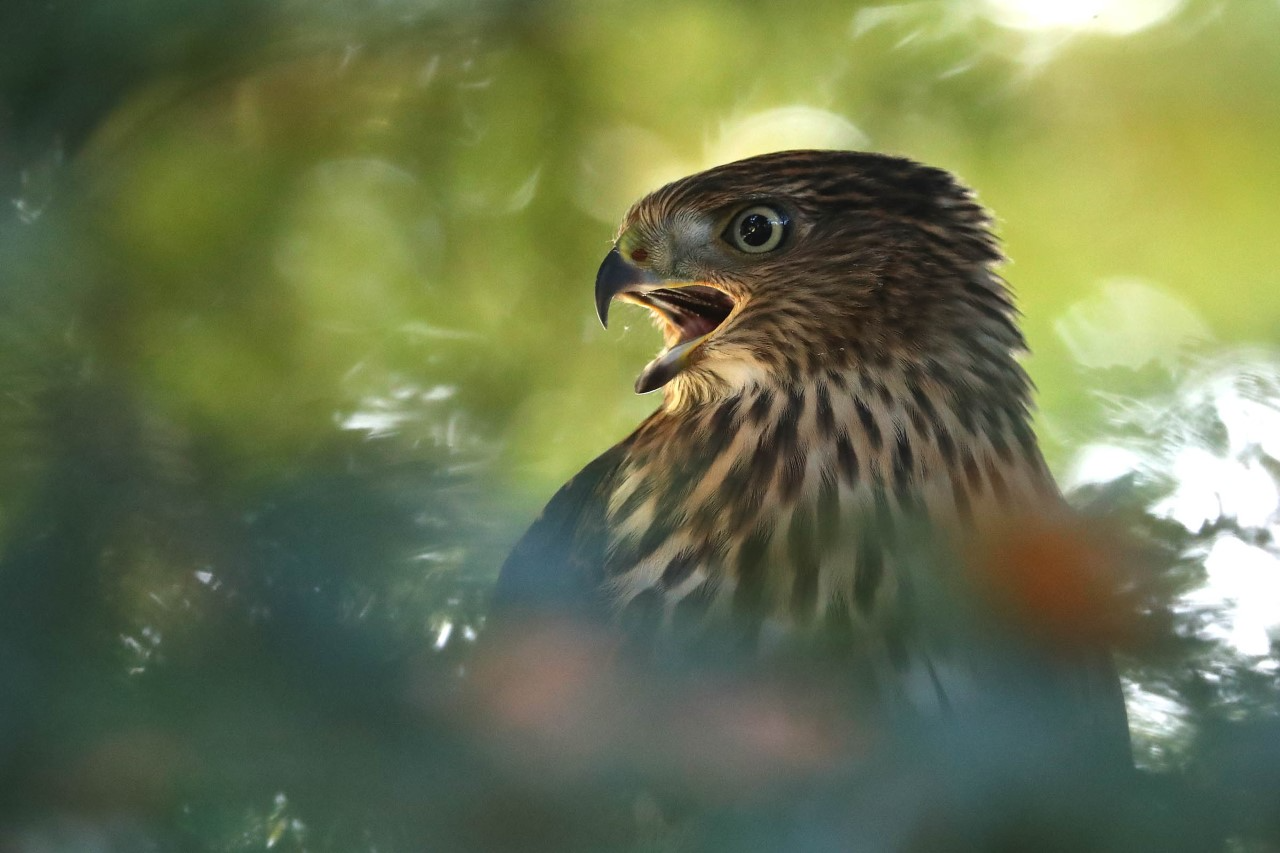 Below. A chick with the remains of a ground squirrel. Note the white spot on the back of the bird’s head. This is called the occipital spot—the base of the feathers in this nape region is white, and when the bird erects these feathers it creates a white patch. A comparative study showed that many raptors have this white patch and expose it by raising their feathers in competitive interactions, particularly over food. Translating into English, this is a signal that says ‘piss off, this is mine!” 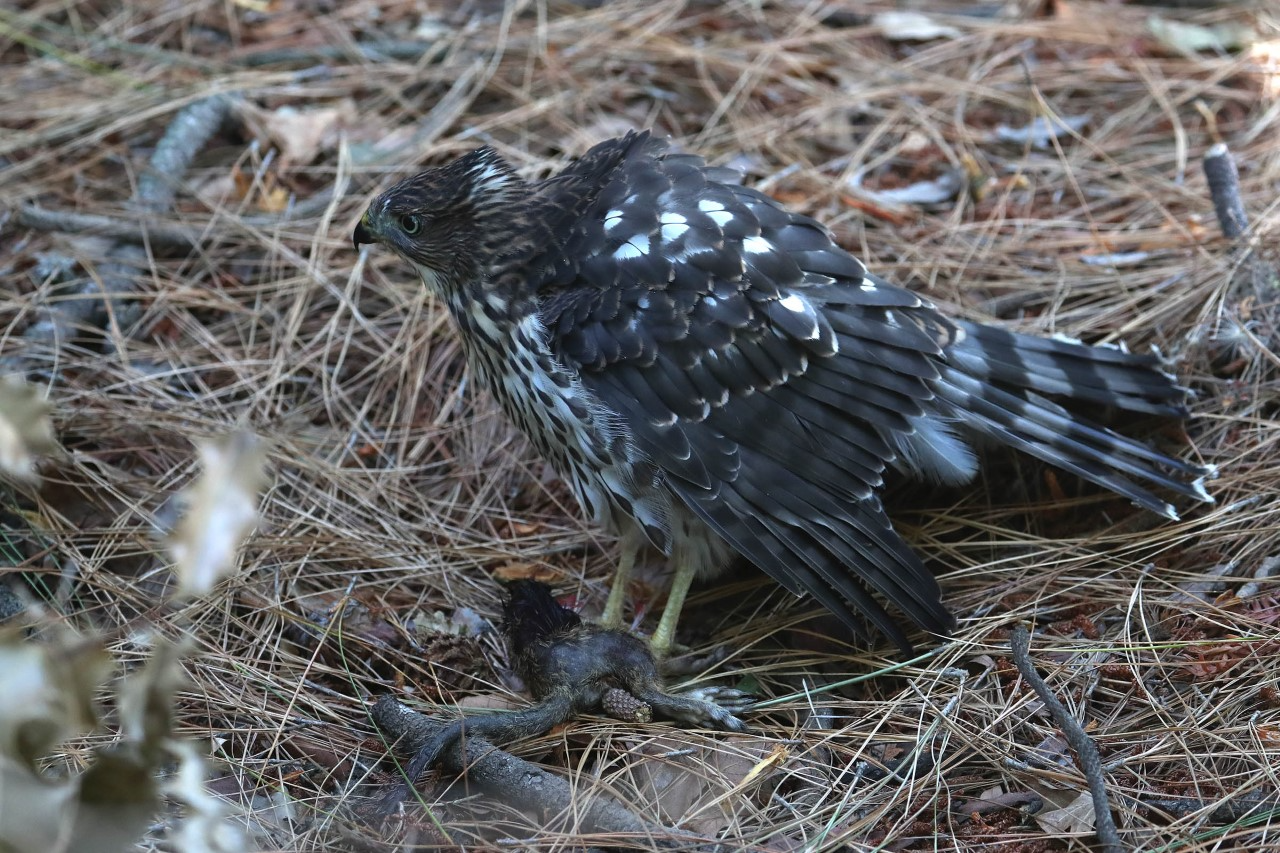 The adults, unlike their chicks, are very efficient killers, and there is an interesting story to tell about how their claw morphology connects to their method of prey capture. Below is an adult female who nested in a nearby city park a few years ago. Sorting through photos of this bird I noticed that the claw on the inner front toe on each foot was dramatically larger than the other two front claws on each foot; the enlarged inset on the right shows this size difference clearly. 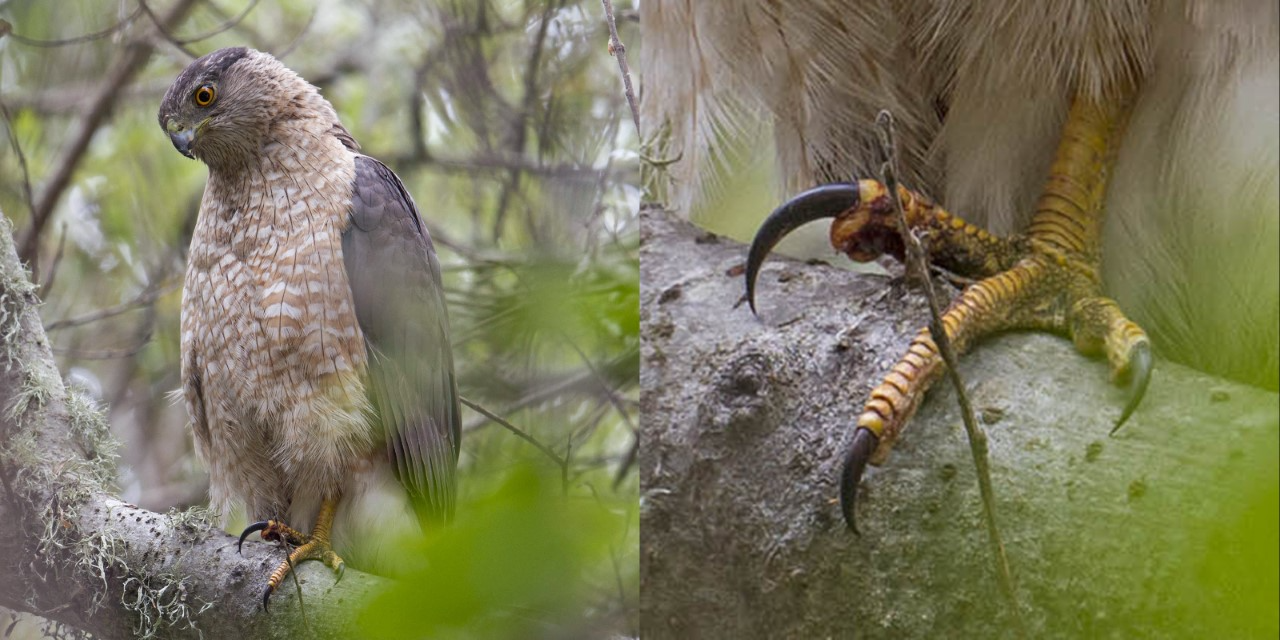 This claw asymmetry made me think about a famous dinosaur I cover in my ornithology class—Deinonychus—and I wondered if the claw could be used in a similar way in hawks and dinosaurs. Deinonychus, discovered by John Ostrom and Greg Meyer, rekindled interest in the evolutionary connection between dinosaurs and birds because this dinosaur shares so many important anatomical features with modern birds.

The idea of a bird-dino link was first suggested by Thomas Huxley based on the Archaeopteryx fossils first discovered in 1861. Archaeopteryx is an amazing fossil, considered a ‘missing link’ because it has a mix of bird (feathers, wings) and reptile features (teeth, bony tail). It was also a very timely missing link, discovered a mere two years after Darwin published the Origin of Species. The proposed dinosaur-bird link later fell out of favor due to influential work by Gerhard Heilmann. He noted that birds and the stem reptiles ancestral to the dinosaurs had wishbones (furcula) but at the time it was thought (falsely) that dinosaurs lacked wishbones. Heilmann reasoned that complex traits like a wishbone would not be evolutionarily lost in a group and then regained later and, based on this, ruled out dinosaurs as the ancestors of birds. His views held sway until the discovery of Deinonychus in the 1960’s.Since then, massive evidence for a bird-dinosaur link has continued to accumulate, including the discovery that many dinosaurs had feathers—including, I believe, close relatives of Deinonychus. It also turns out that dinosaurs had wishbones all along.

Below: John Ostrom with Deinonychus (photo from the web). 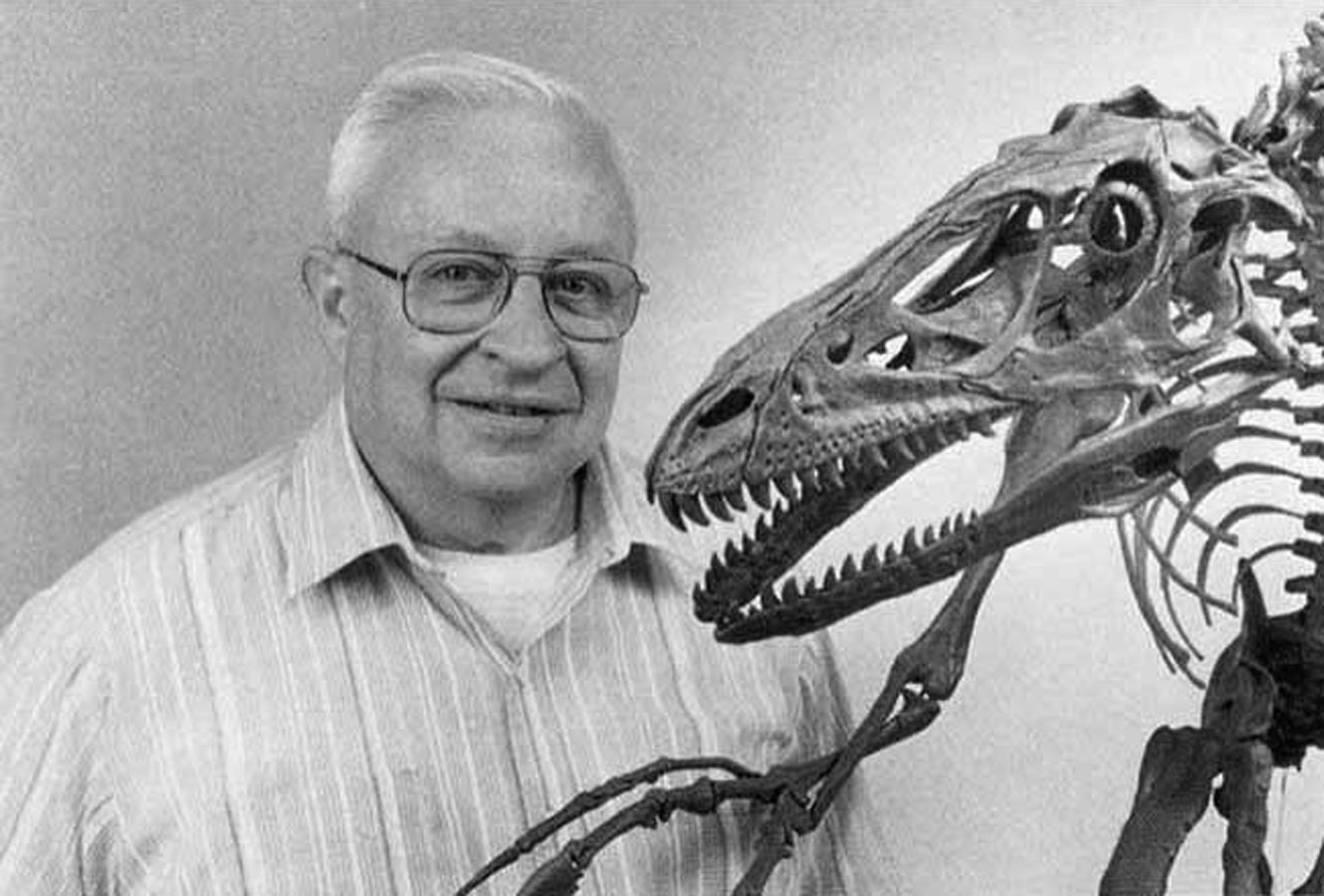 Below. One feature of particular interest to a post about the Cooper’s hawk is this dinosaur’s claws. Deinonychus means ‘terrible claw’ and refers to the dramatically larger claw on the inner front toe of each foot. This asymmetric claw pattern made me wonder whether Deinonychus and some modern raptors with similar claw patterns might have hunted in the same way. Here is a fossil showing that terrible claw (photo from the web). 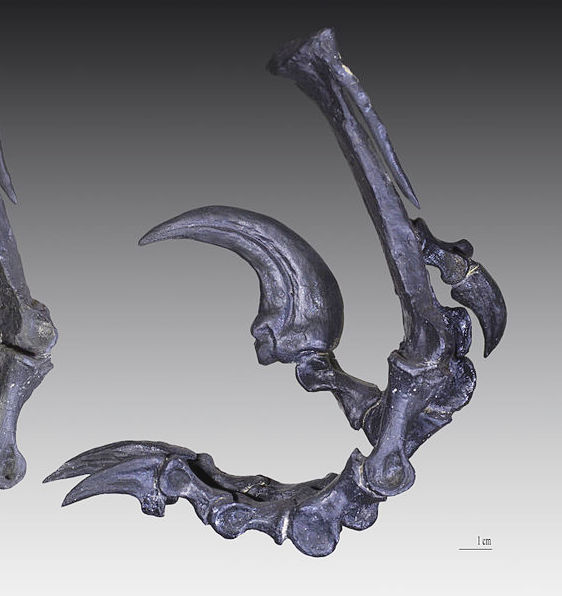 Below: An illustration shows the size of Deinonychus plus a long-held idea of how it might have used its claws in a hunt—leaping up and slashing its prey by kicking them with the fearsome claw. I have not read reports of Cooper’s hawks hunting like this but I once observed a Cooper’s hawk chasing down a starling on the ground, looking very much like way some predatory dinosaurs are often portrayed (illustration from the web). 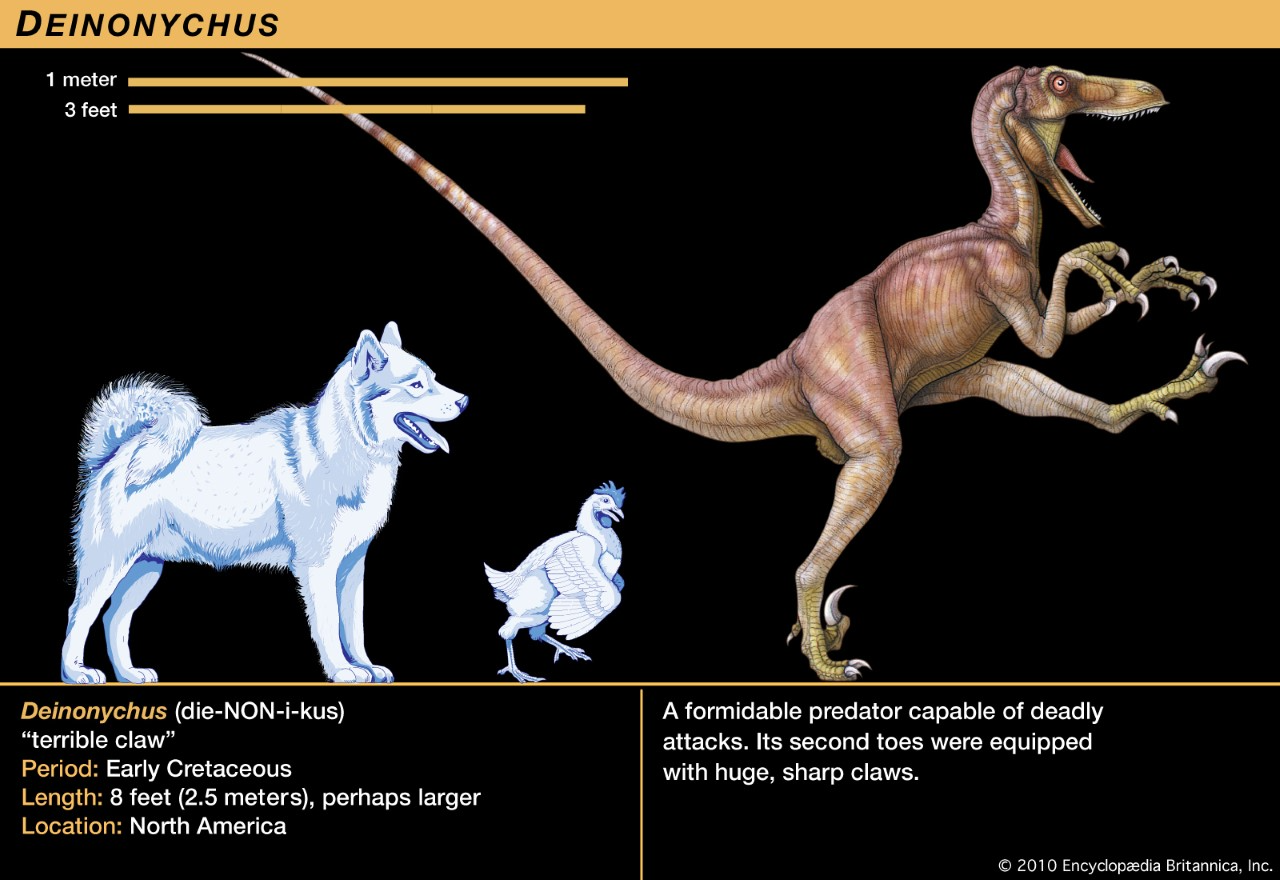 It turns out that I am not the first person to note the parallels between the claw structure of Deinonychus and living raptors. Denver Fowler and colleagues wrote two papers on the topic. The first paper (Fowler et al 2009, pdf here) is a comparative analysis exploring how variation in claw asymmetry in raptors (hawks, owls, falcons) correlates with mode of predation, and specifically how the raptors subdue their prey. They note that the species with the enlarged inner toe claws—the Accipiter hawks that include Cooper’s hawks—often capture very large prey items. Unlike falcons, these hawks do not use their beak to quickly dispatch the prey item so there can be lots of struggling. The authors suggest that these hawks use their large claws to grab hold of struggling prey and prevent them from escaping. Eventually, when things are under control, the raptors use their body weight to pin the prey under them and the enlarged claws are also used to pin the prey down.

The authors also suggest the raptors also use the claw to drag their large prey items to more concealed locations where the raptor can eat in peace without being mobbed or having a larger predator steal the prey item. A second paper (pdf here) applies these ideas to Deinonychus and proposes that it might have used its claws in a similar fashion to Accipiter hawks: to pin down and subdue large prey rather than slashing and kicking prey with the feet.

Below: As I was writing this post, I remembered that I had witnessed and photographed exactly what the authors describe in a sharp-shinned hawk (Accipiter striatus), similar to the Cooper’s hawk but smaller. (WARNING: if you do not like gory descriptions or photos of predation, this is a good place to stop.) Several years ago, a small immature sharp-shinned hawk pounced on an American robin (Turdus migratorius) on my neighbor’s lawn. 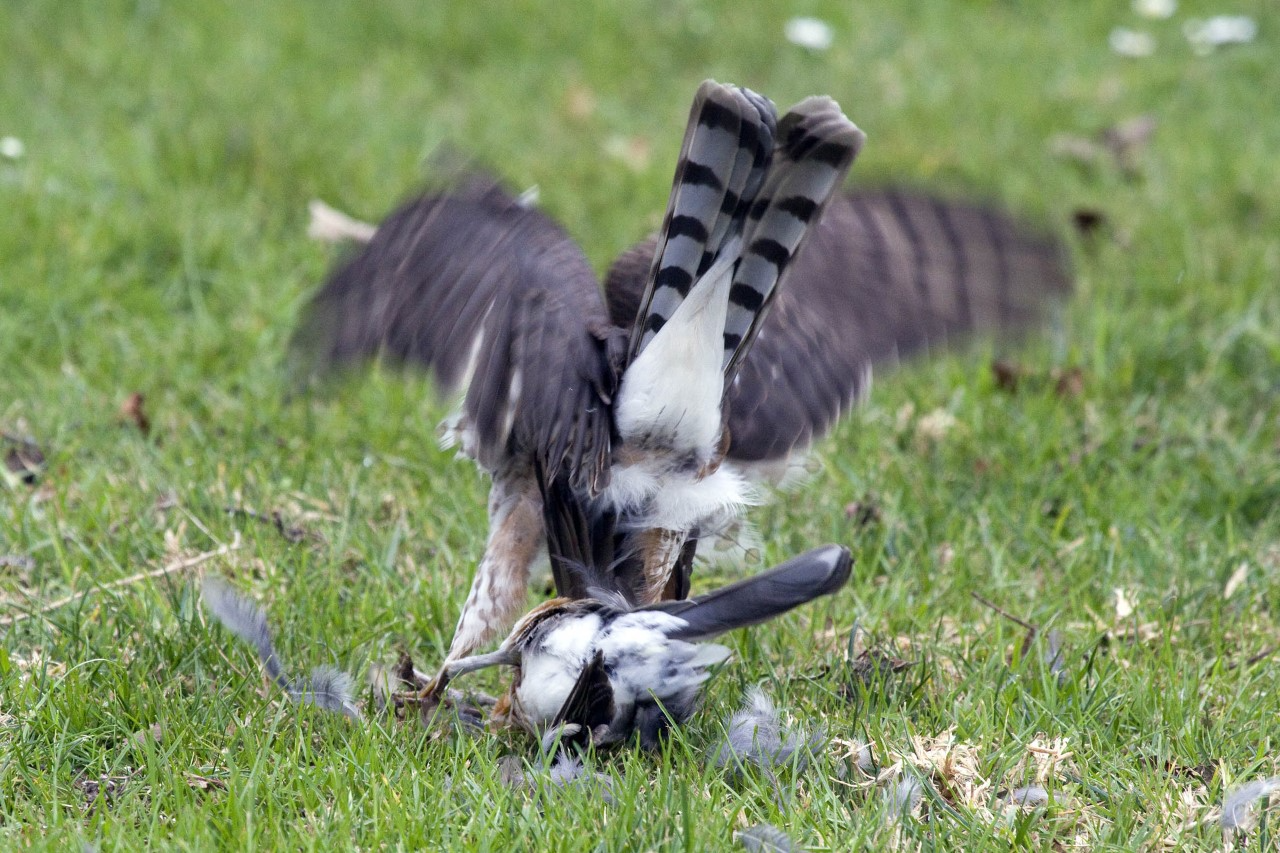 Below: The robin was not much smaller than the hawk and there was a drawn-out struggle before the robin finally succumbed. The hawk hung on tightly, often flapping its wings to maintain balance as the robin fought back. At the time I figured this particular hawk had made a mistake and bitten off more than it could chew— from these papers I now realize that what I saw is not uncommon for Accipiter hawks. 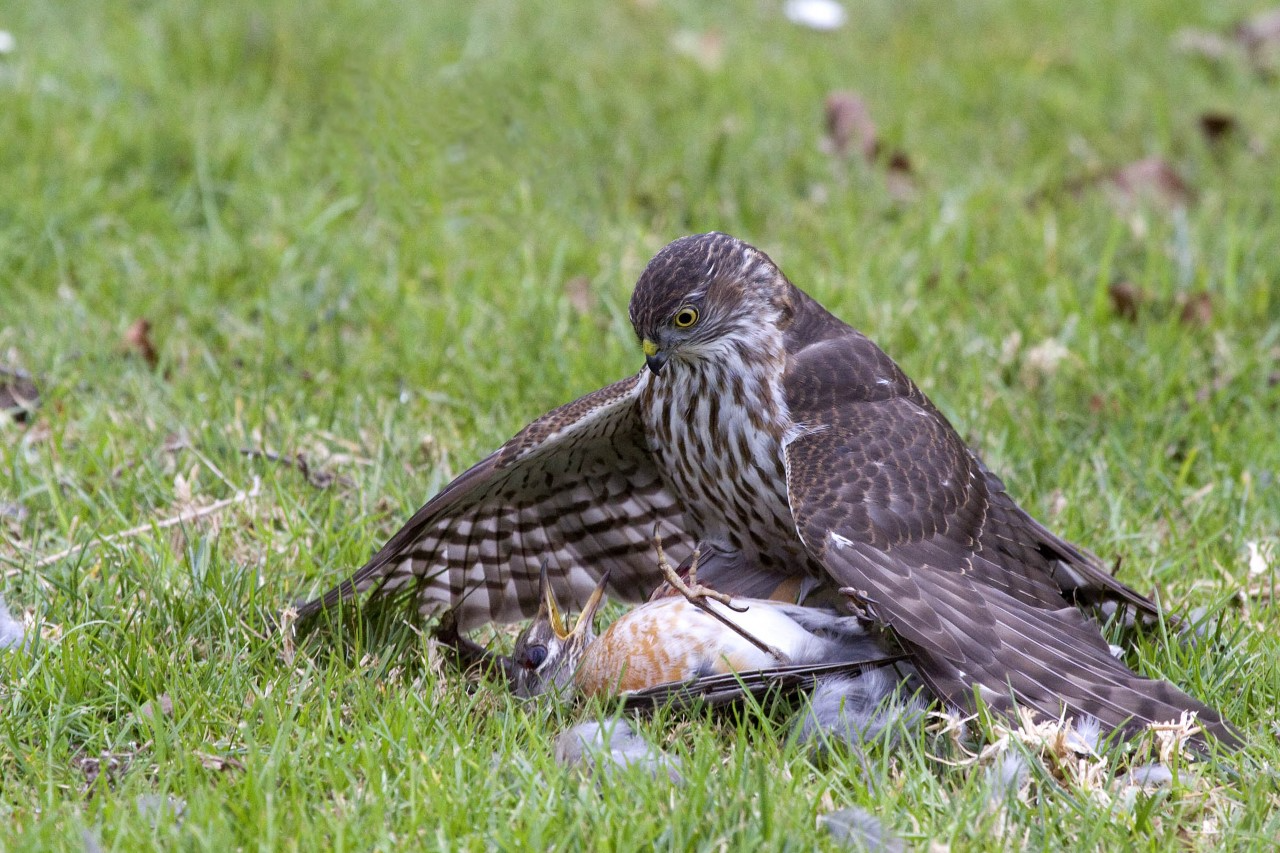 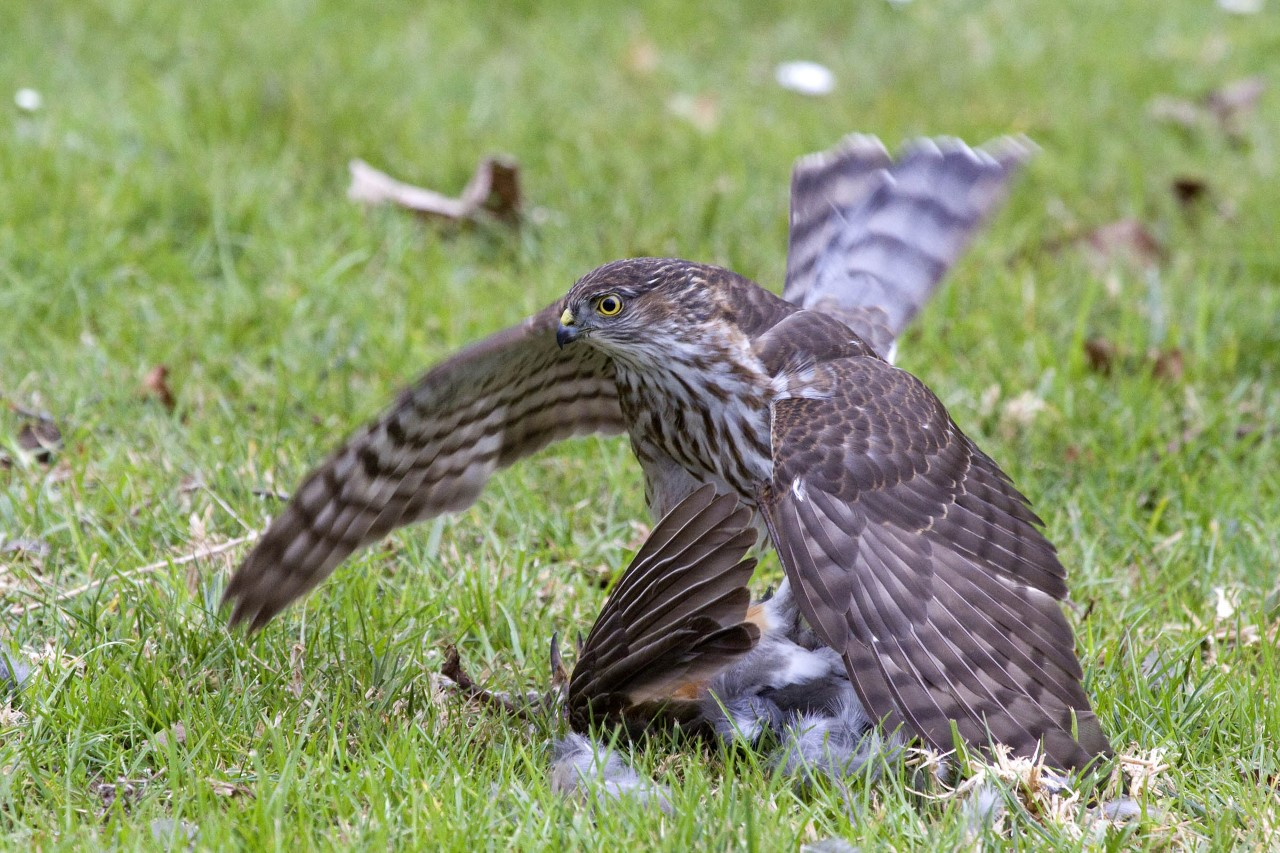 Below: As study describes for Accipiter hawks generally, the sharp-shinned hawk I observed dragged the dead robin a considerable distance to get away from the exposed open lawn so it could eat its prey in a more secluded setting. The robin was too big for the hawk to carry in flight so the hawk flapped its wings and dragged the carcass across the ground, presumably hanging on tightly with its ‘terrible claw’. 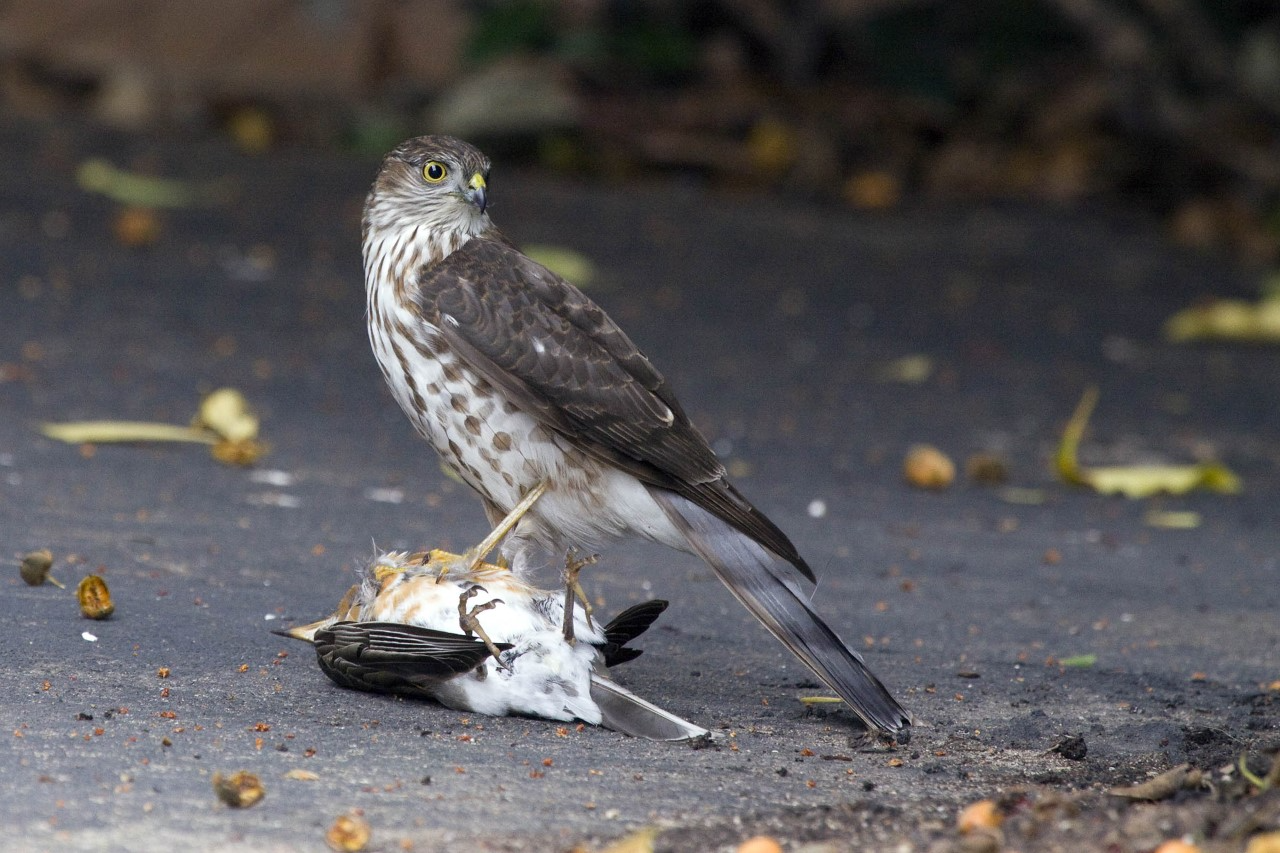